I've been a little hesitant about getting into another line of Transformers. It means less money that can go into other stuff I really like. I resisted the Transformers Prime line a good bit by only buying characters I REALLY like. I thought I was doing good until I realized that I have almost every character released in this line...

Just when I thought I was safe, the Dark Energon line is released. I resisted again because they are just repaints. Then I realized they are not only repaints, but they are full of translucent plastic goodness! I jumped at the chance to review the Dark Energon Voyager set. This set is an exclusive of BBTS. If bought as the Optimum Prime/Megatron set, you receive a DVD with Season 2 Episode 6: Loose Cannons. You can also buy them seperately.

Today I will focus on half of the set. I will be showing you the Dark Energon Voyager Optimus Prime. He comes in the standard Prime Voyager box with Dark Energon markings. 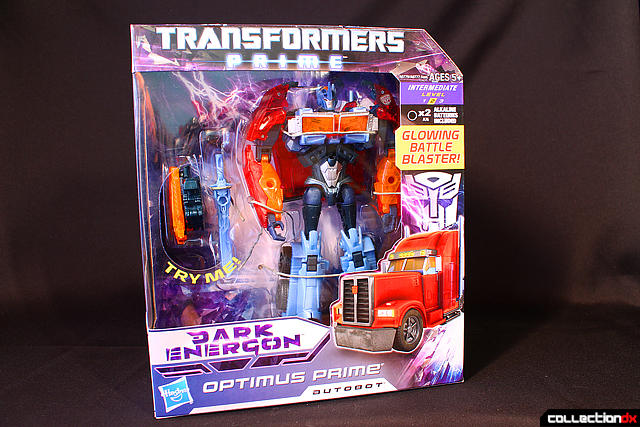 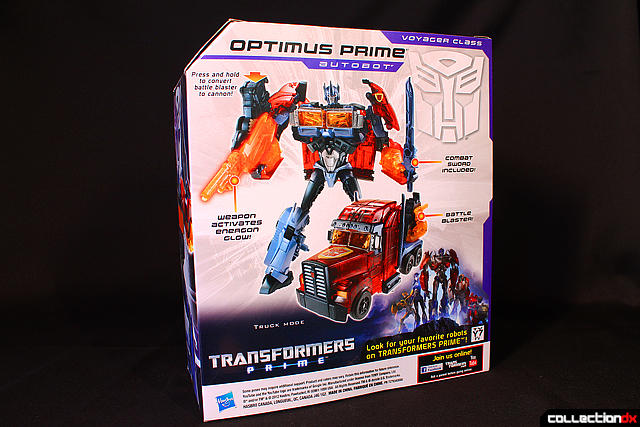 The tray really makes the figure stand out by having colorful Dark Energon graphics on all sides. 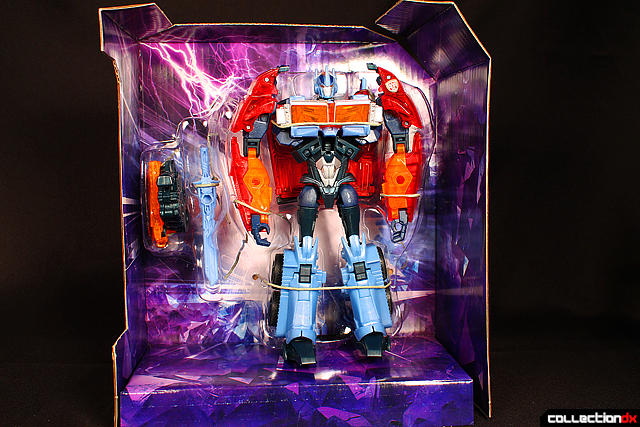 I will start off with vehicle mode. The first thing to strike you is the amount of translucent red plastic used. 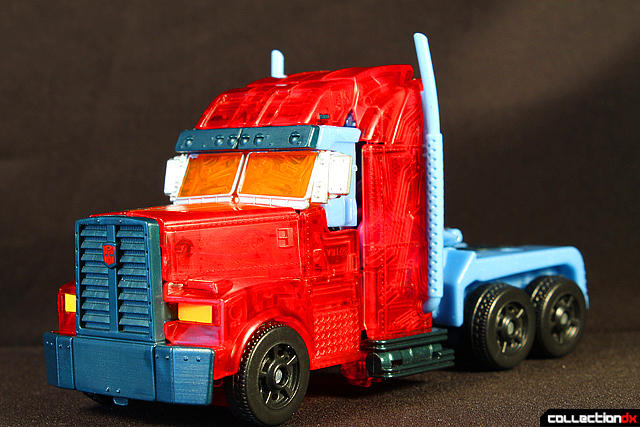 I'm not sure if this was planned during the production of the standard release, but using the clear plastic allows the detail underneath to come through. 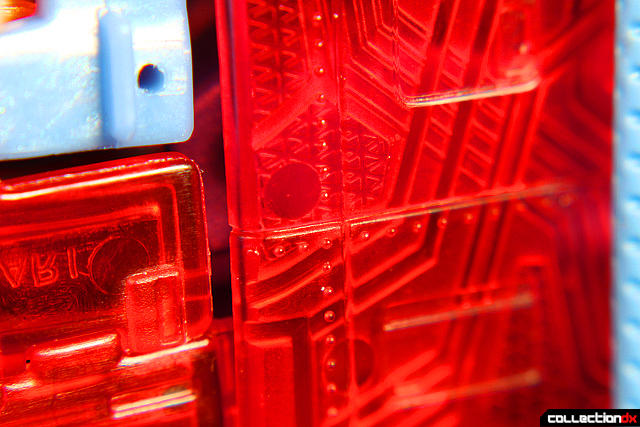 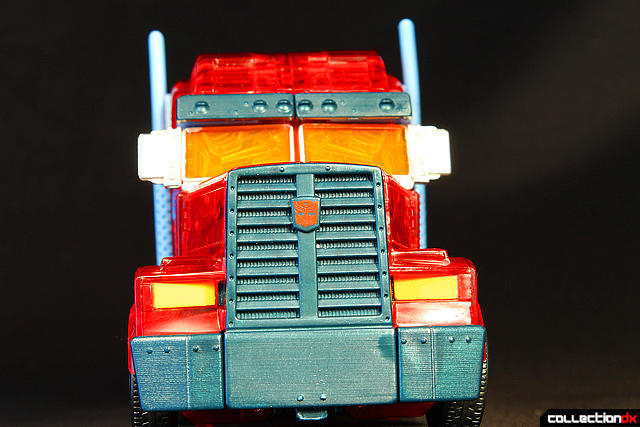 The back half of vehicle mode features light metallic-blue plastics. 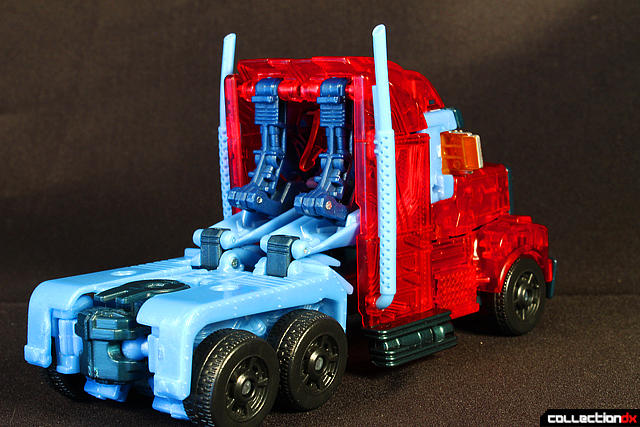 The hood has a huge Dark Energon exclusive faction logo. Its a standard Autobot logo with a gold shield behind it. I could have done without the gold shield part of it. 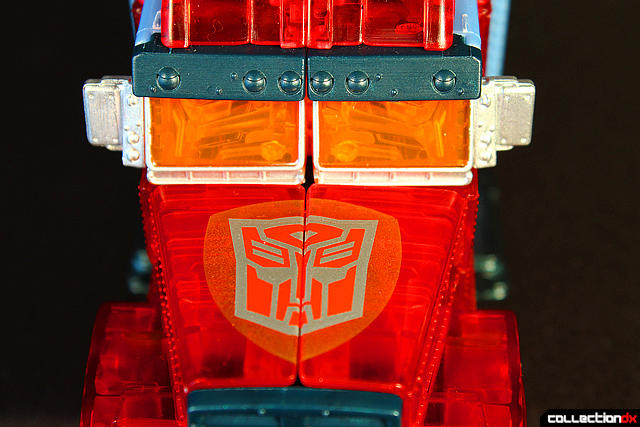 Here he is in comparison with my custom Prime Wheeljack Deluxe figure for scale. 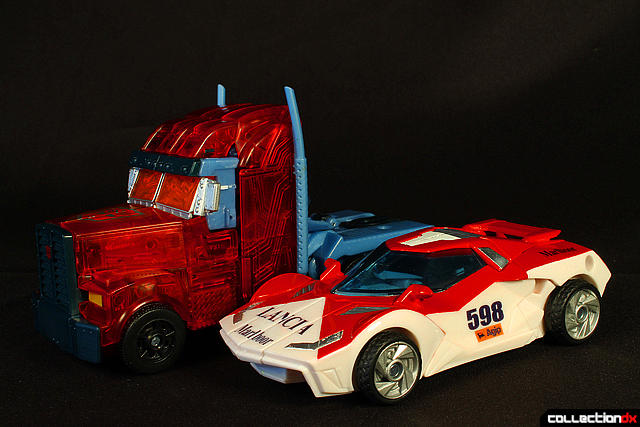 Here is a sneak peek of the Dark Energon Megatron in comparison with Optimus Prime. 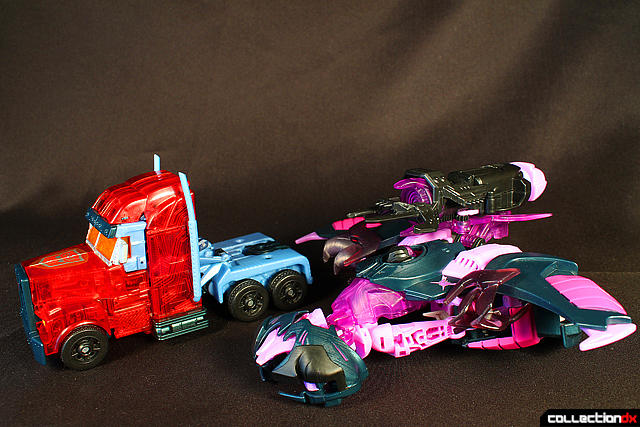 The weapons can be combined and plugged into the back. The weapon is a bit too big to look good in my opinion. 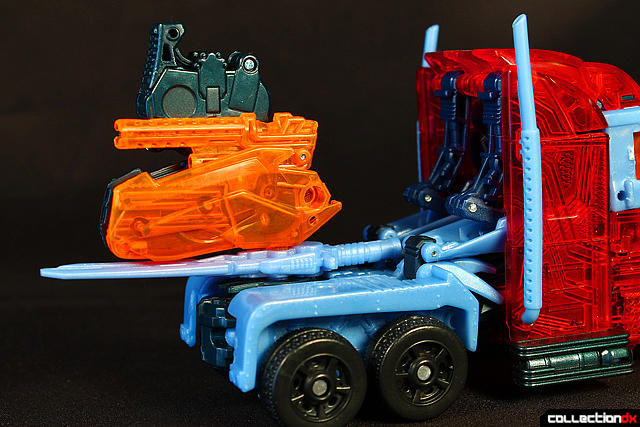 Even if you place a Deluxe sized figure there, the weapon still looks a bit off and the figure can't even reach it despite its long Gorilla Arms. 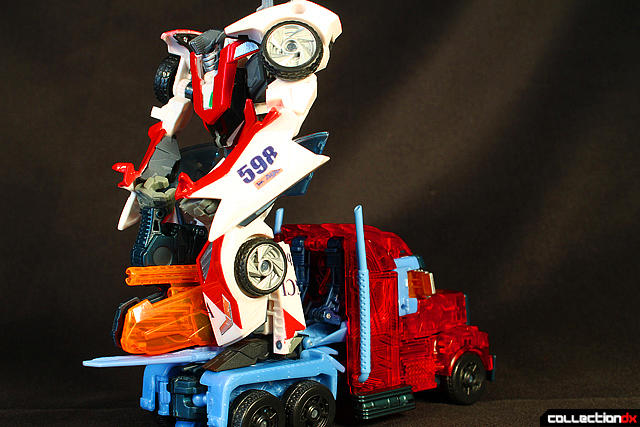 If you pull the roof of the cab back, you can also attach the weapon there. The weapon has an LED and extending feature which I will show you in robot mode. The weapon may be bulky due to the LED gimmick which causes it to look out of place. 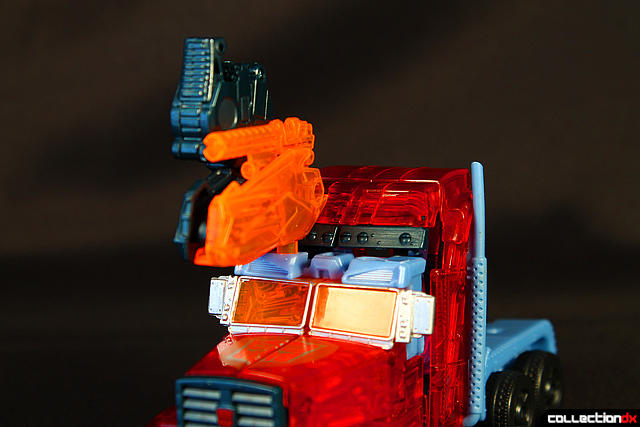 If you already own the standard Voyager Optimus Prime, you immediately notice that it is the exact same mold. What differs however, are the different paint apps and plastic colors. The reds are now translucent and the blues are now a lighter metallic shade of blue. 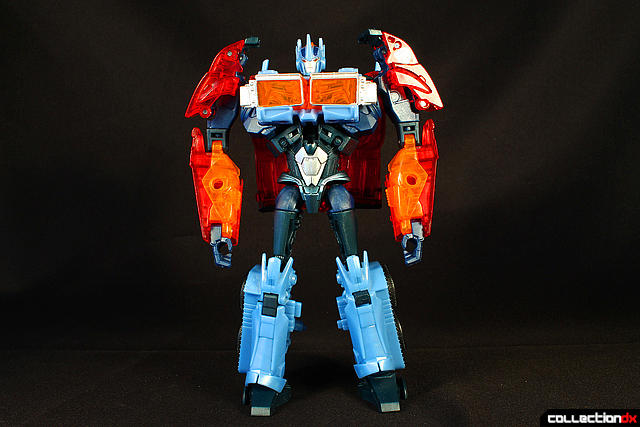 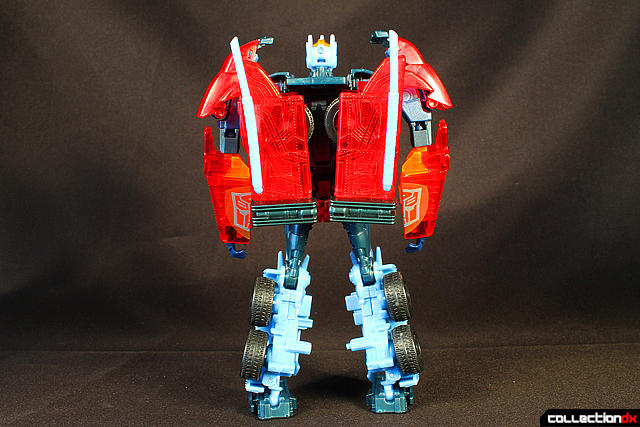 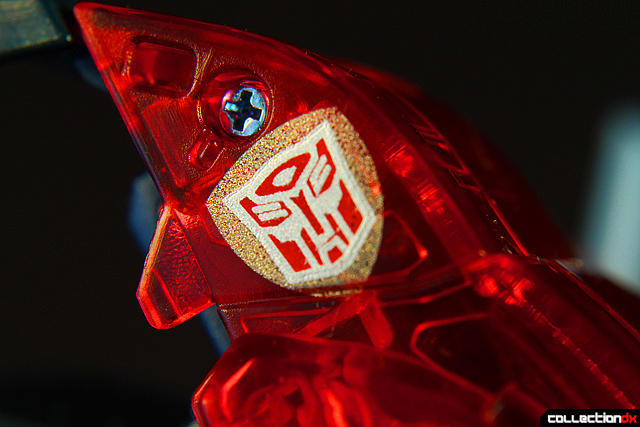 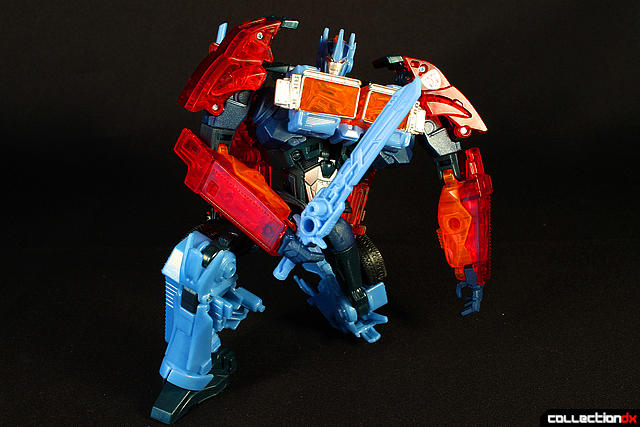 He also comes with an Energon weapon which is a gimmick used on all the Prime Voyager figures. It still continues to be an awkward weapon with a lackluster LED gimmick. 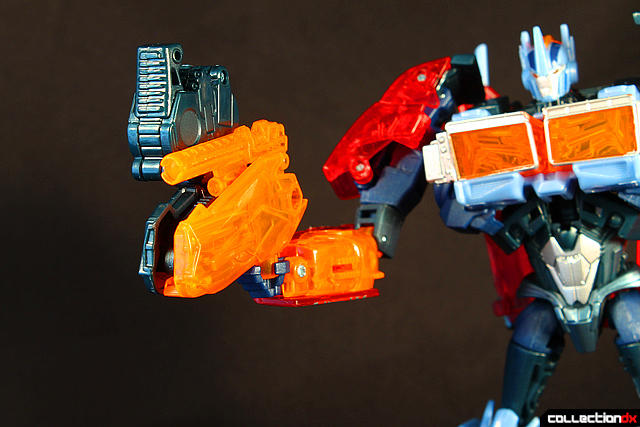 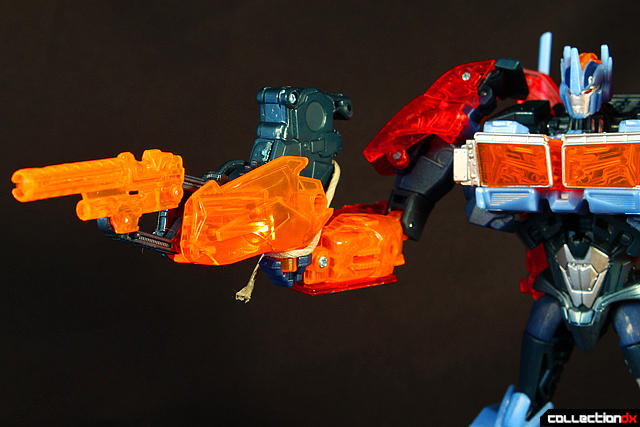 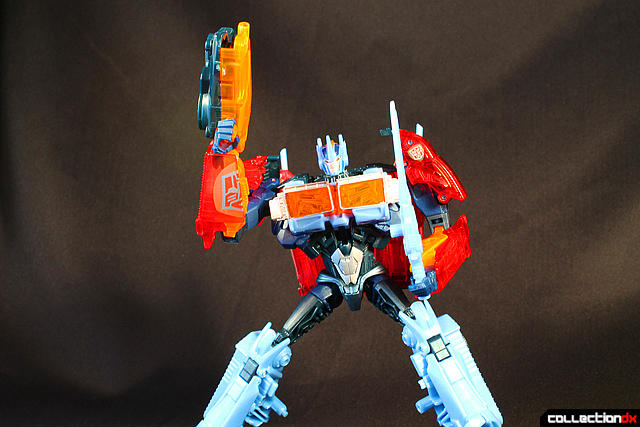 Both weapons can be combined to be used with one hand. 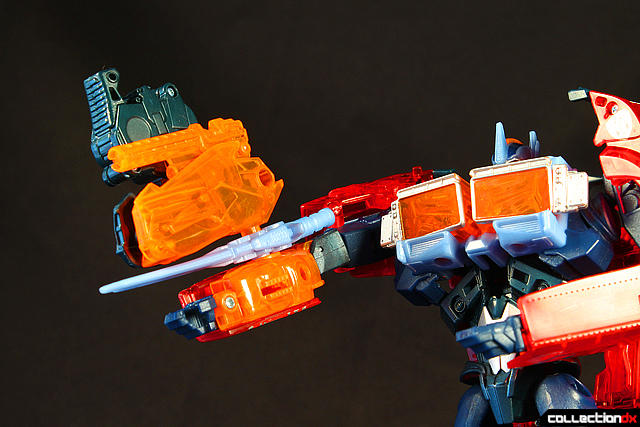 Up close you can see the nice detail that shows through the windows that are molded out of bright translucent plastics as are the cab pieces that feature excellent detailing underneath. You will also notice that the face no longer has a mouth shield. 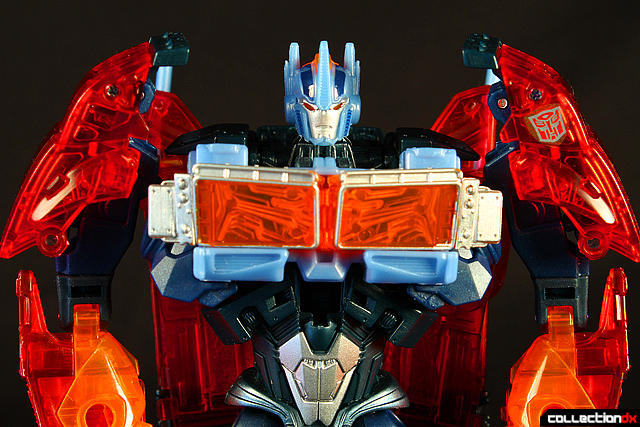 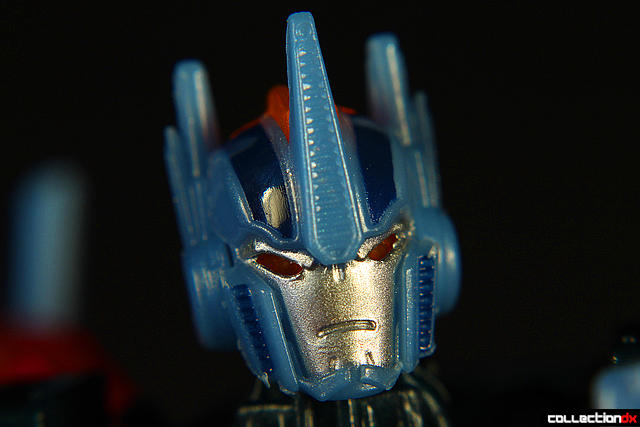 Here is a side-by-side comparison of both versions. 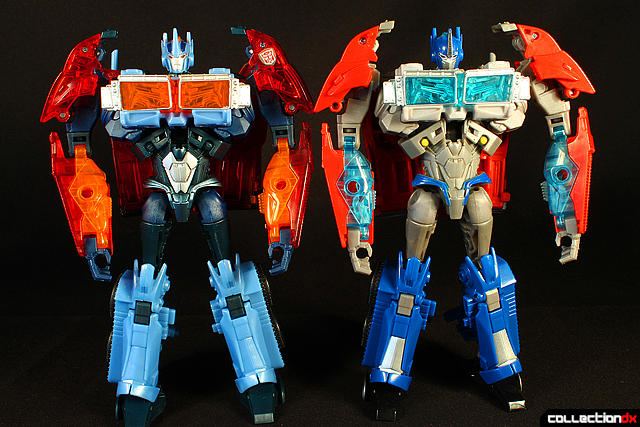 Optimus next to the standard Voyager Megatron 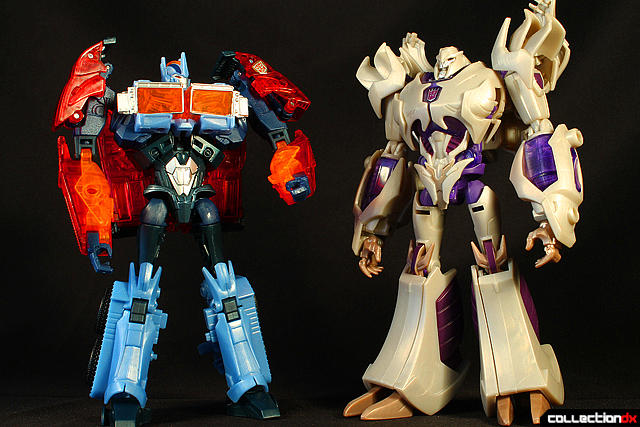 How about an MP-10 Masterpiece Optimus Prime? 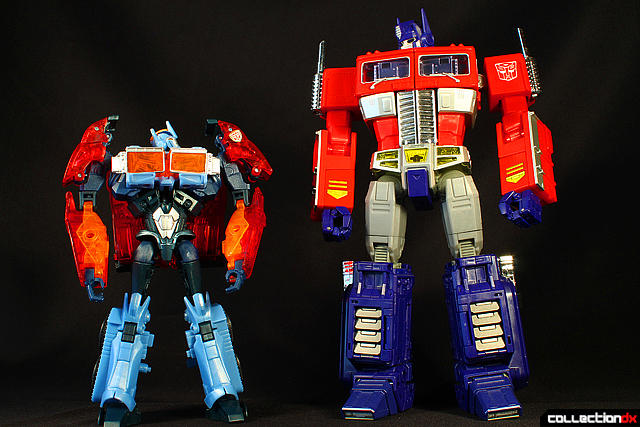 He can't seem to avoid the infected Megatron who continues to give off the contaminating, color changing Dark Energon! 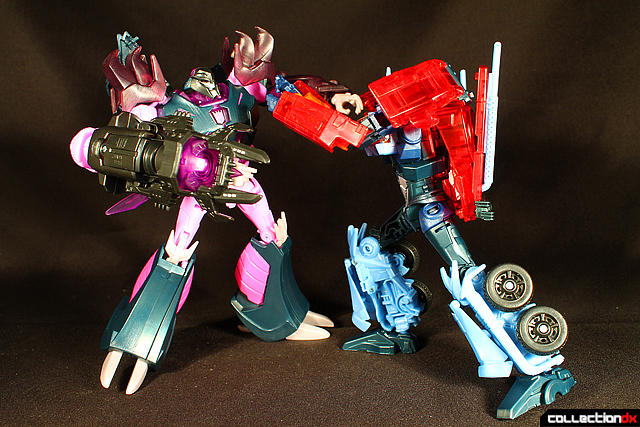 Overall this is a good figure. It's a nice redeco of the original but it's still overshadowed by one thing. The First Edition Optimus Prime mold which seems to be a fan favorite. Had they chosen that mold for the Dark Energon Optimus Prime, I would consider it that much better. You can get this guy alone or buy him as a set with Megatron to save yourself $10 and get a free DVD. Overall, I am pretty content to have this in my collection. The battle continues! 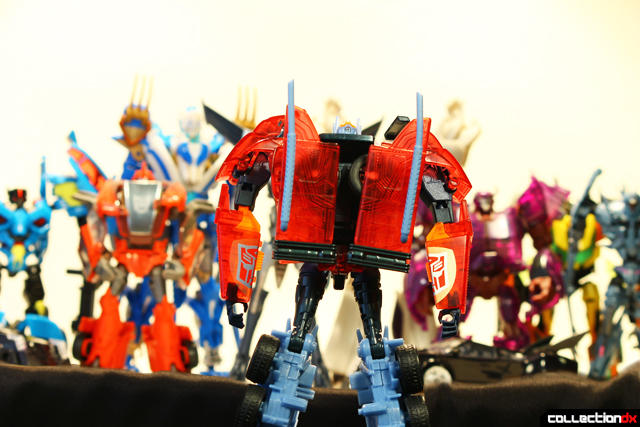