In sharp contrast to the S.H. Figuarts Luke, we have here the Black Series version. Normally I am perfectly content with the Black series, considering the price point and ease of acquisition. But putting this side by side with the Figuarts makes this such a letdown.

Let's compare and contrast a bit.

First off lets look at the box. It's a standard Black Series box, with the number of 21, which satisfies the OCD collector in me. It's interesting to note though that the Figuarts, while having a more compact box, has more accessories. 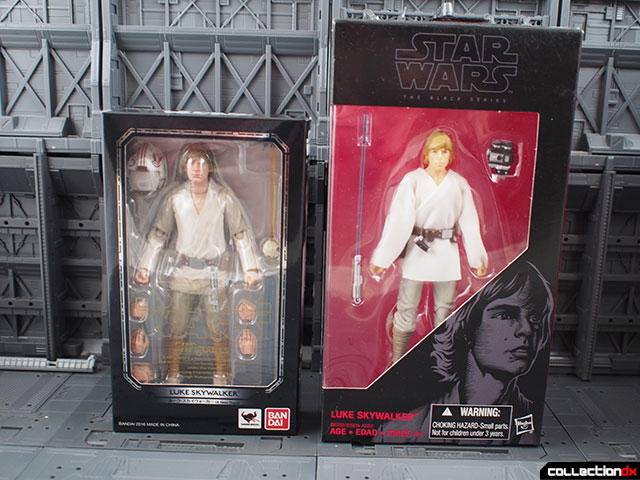 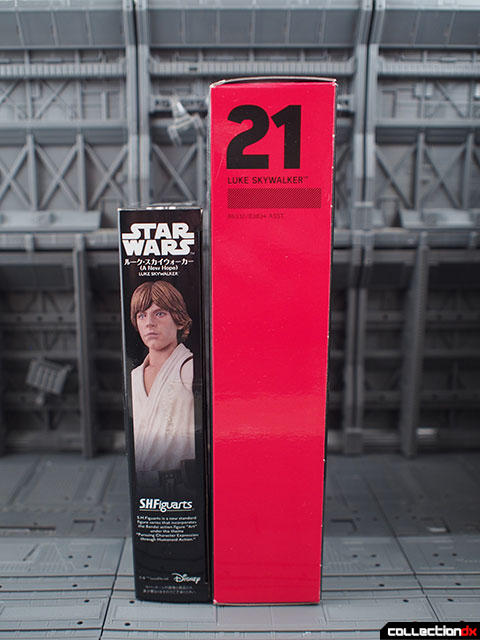 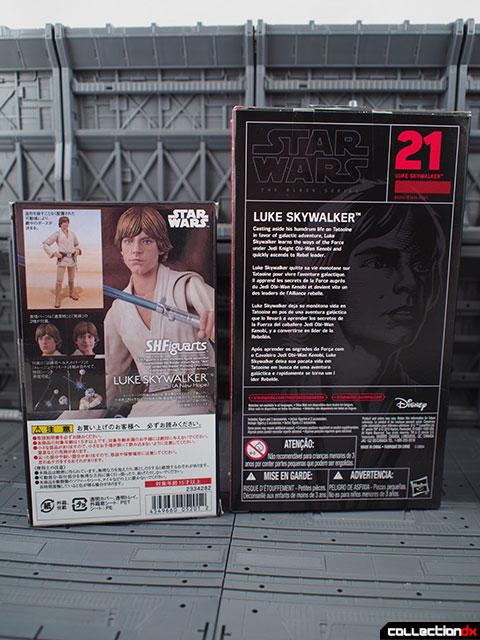 While I appreciate the consideration for space on the Figuarts, I applaud the Black Series for consistency.

For the figure, Luke is in his Tattoine gear as seen early in A New Hope. Right off the bat you can see the issue is the ill-fitting soft goods shirt. It's way too big, too clean, and too puffy. 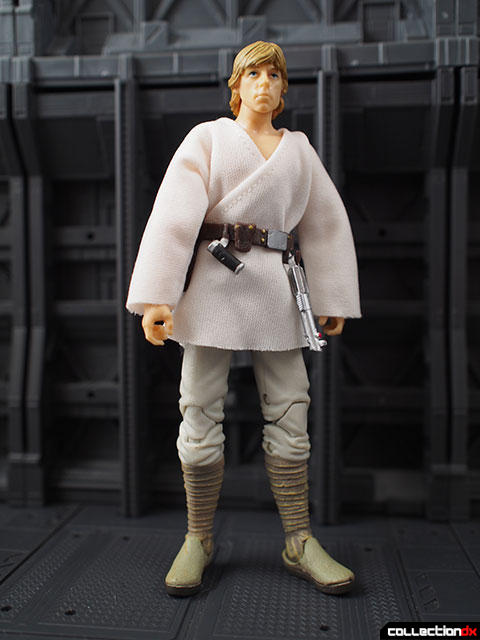 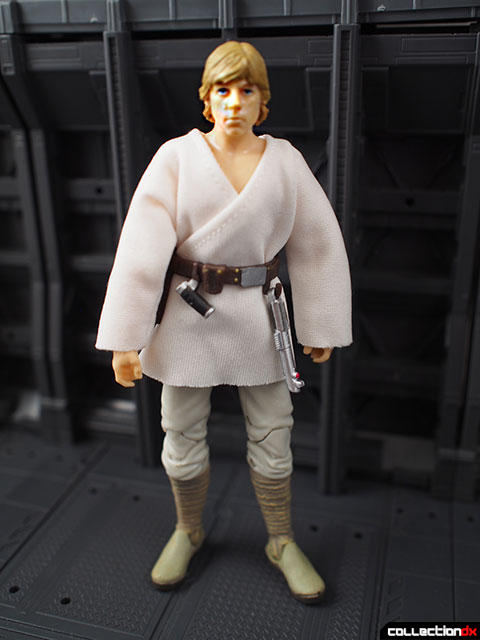 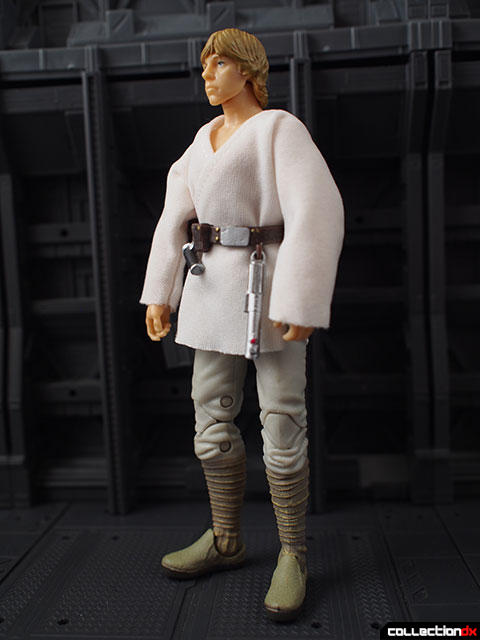 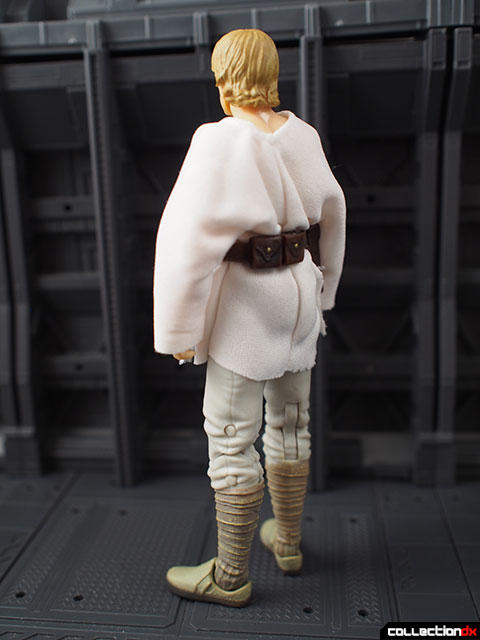 Articulation is very good, which is standard with the Black Series. Double jointed knees and elbows, ab crunch, all the basics are there. 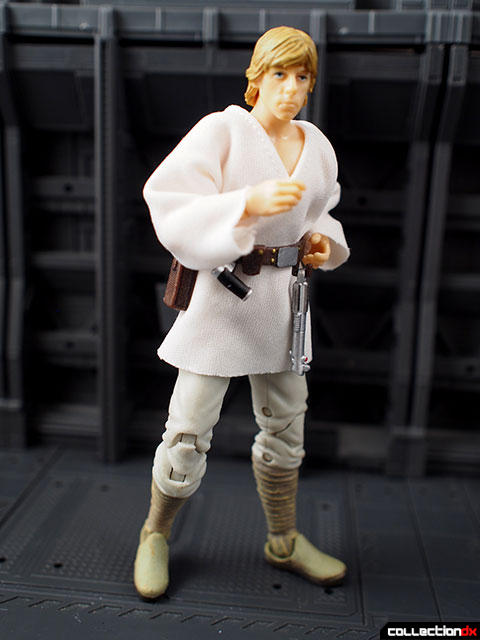 His shirt is a bit more forgiving when posed. 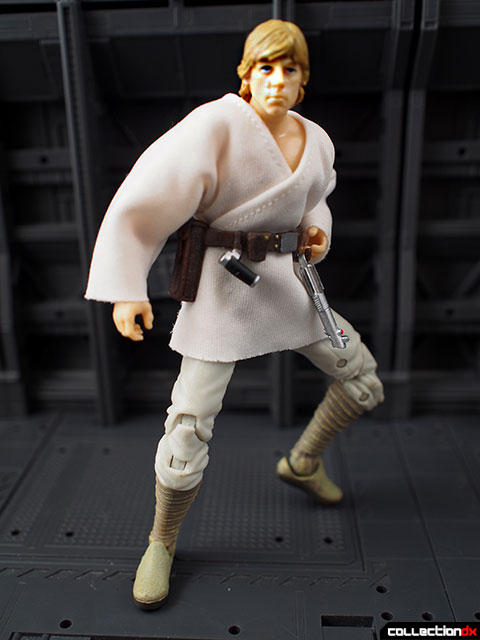 Aside from his saber, Luke's only accessory is a set of Macrobinoculars. This accessory was not included with the Figuarts, so that's a plus. It has a clip to attach to the belt, but I think it's supposed to go on the front. Sadly - no room. 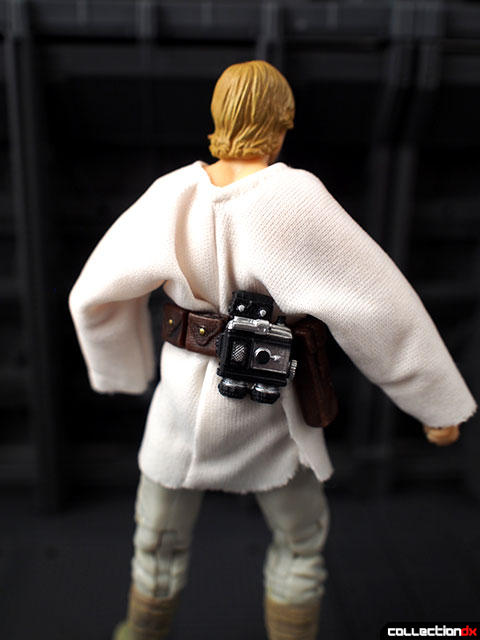 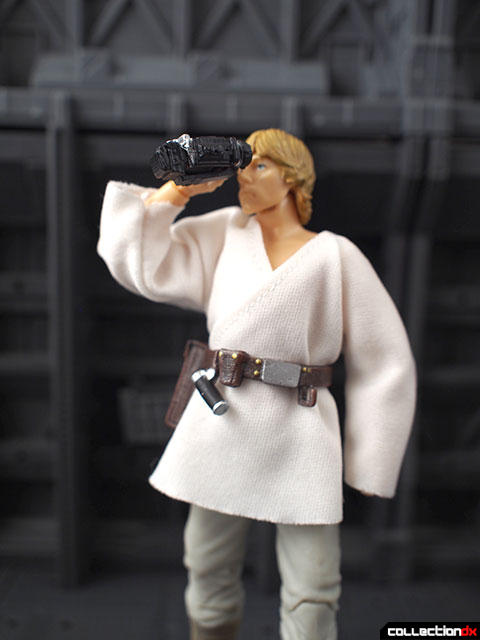 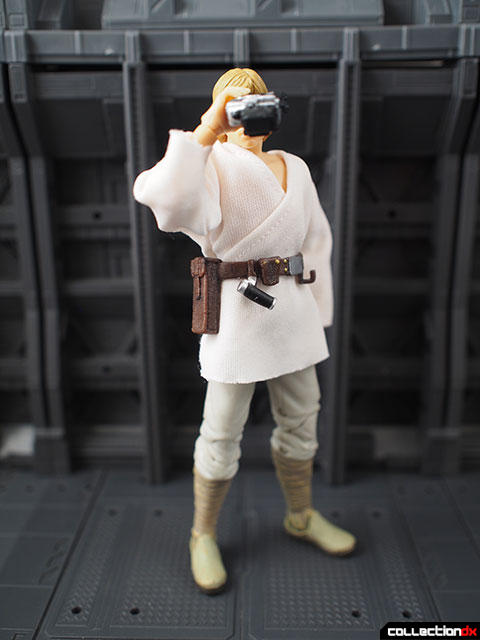 Luke's saber attaches to his belt with a loop. The hilt is nice, with paint application on a button. I'd say it was nicer than the Figuarts if it weren't for the loop. The plus side of this loop though is it hangs accurately rather than being pegged in one position. The blade is detachable. 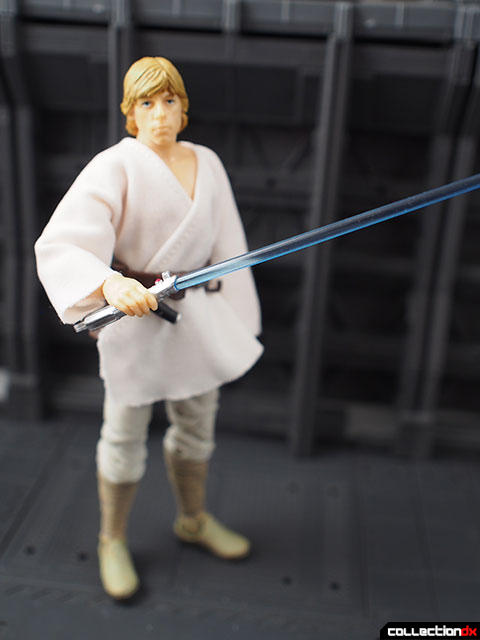 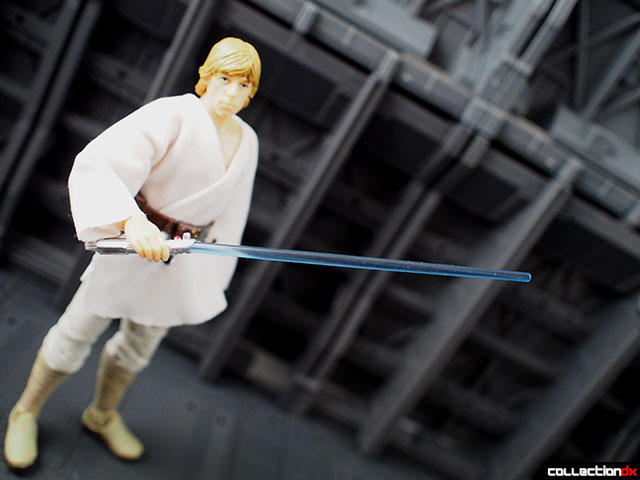 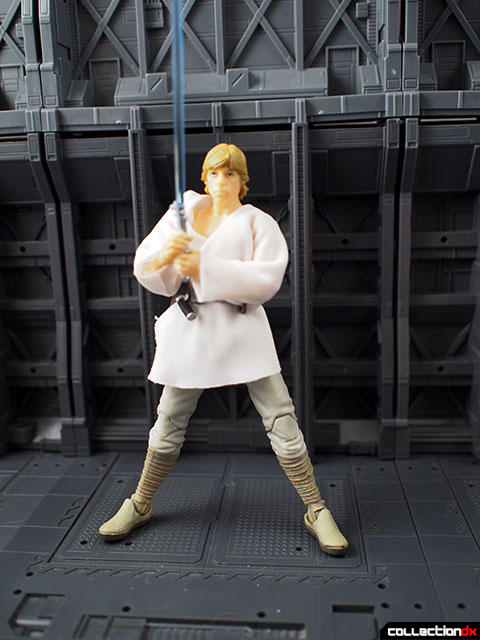 For $20 it's not bad, although like I said, the cloth goods shirt irks me.

But when you put the two releases next to each other... 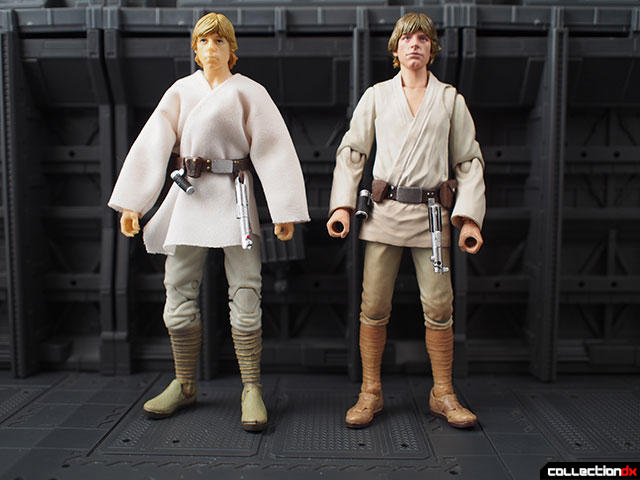 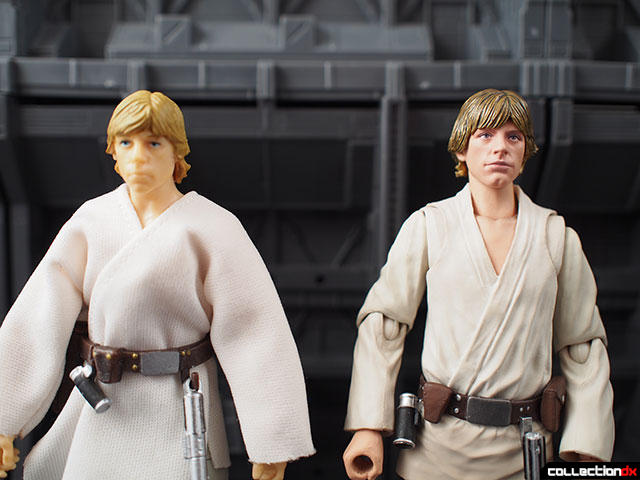 Look how much nicer the non-cloth shirt looks. Look at how much more realistic the head sculpt is on the Figuarts. It's no contest. 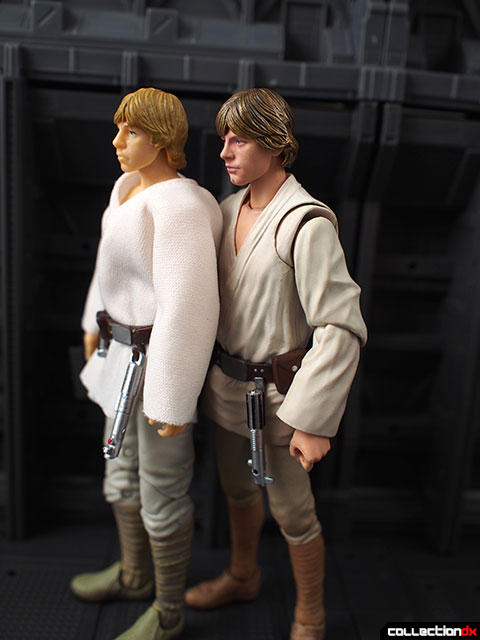 Even the colors on the boots look better on the Figuarts. 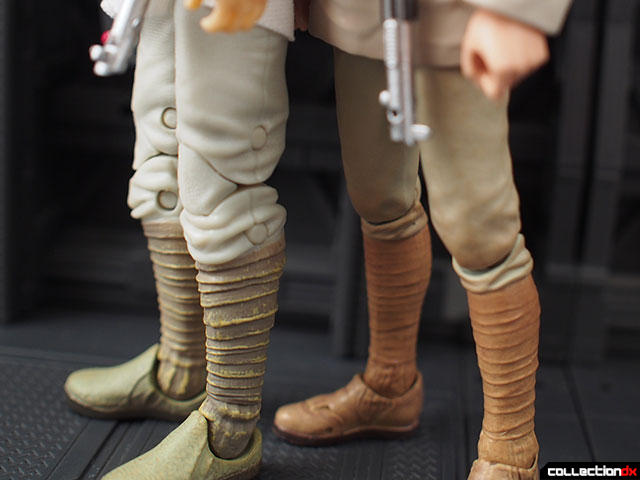 In addition to a quality difference, there is actually another difference that puzzles me. The Black Series belt has a long pouch on the right hip, where the Figuarts does not. I did some research and found a promotional still where he has the belt, and only one scene in the movie. For most of the movie, this pouch is missing. There seems to be very little information on this online, which is surprising considering this is one of the most dissected movies of all time. Where did the belt come from, and where did it go? 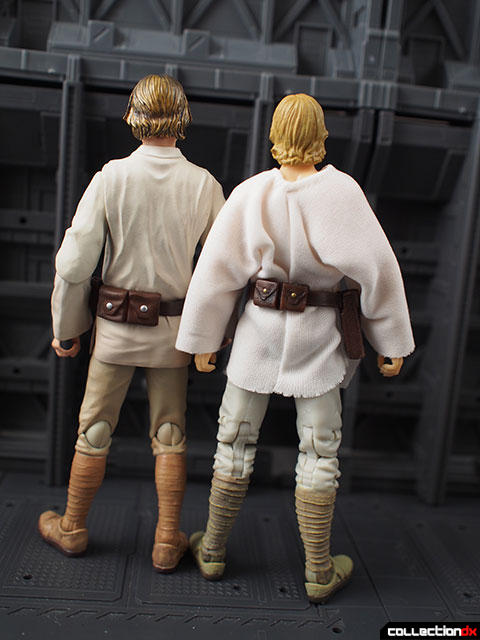 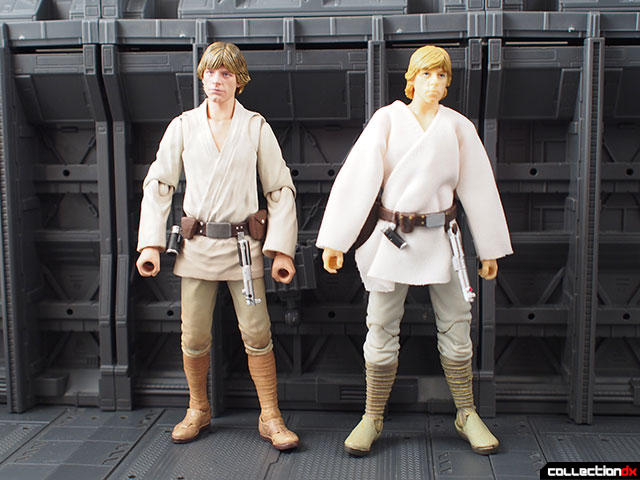 Anyway, despite the obvious superiority of the Figuarts release, I don't think I am going to collect ALL of the Star Wars releases. For most of the case the Black Series is good enough, considering the alternative is 4x the price.