Hasbro & Takara both went all in on Combiner Wars/Unite Warriors, but their approaches were different. Except for the Constructicons & Technobots, Hasbro altered or replaced one member on each classic team. Takara did not, in favor of legacy, nostalgia, and tradition as they tend to be. So, when Hasbro got around to the Protectobots, they turned Groove into a Legends-class figure and filled his old spot with an all-new character named Rook. Takara passed on both and instead created their own Deluxe-class Groove.

Initially, he was only available as part of the UW Defensor boxset, itself a Takara-Tomy Mall exclusive. But thankfully, Hasbro has no problem capitalizing on Takara's leg work, so they tweaked his deco a smidge and gave him the solo treatment. 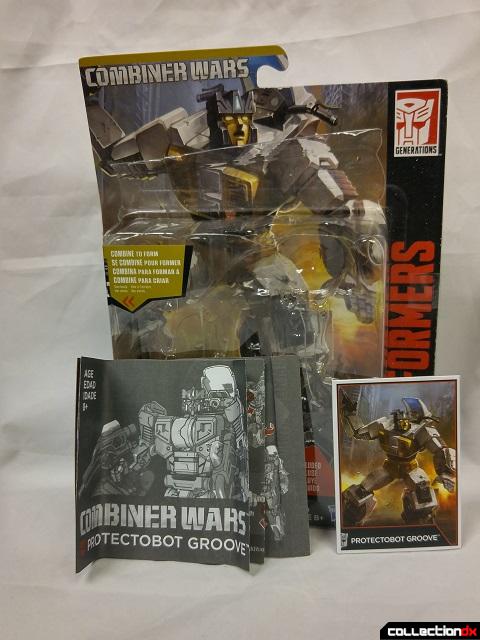 Groove comes packaged like all the other Generations deluxes, with nice, large art adorning the card behind the bubble. Additional inserts are the manual and trading card. 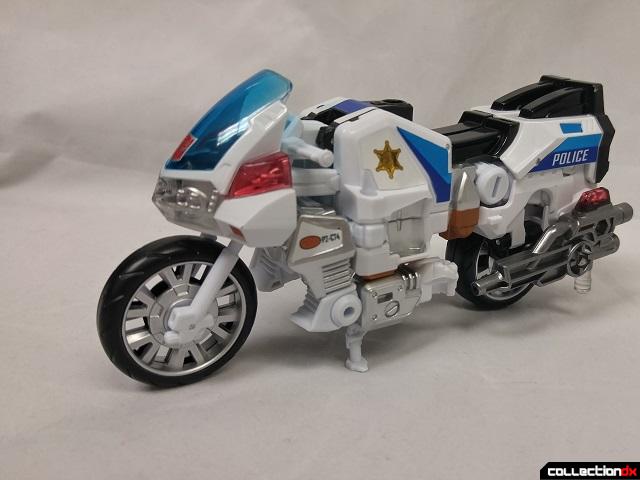 As before, Groove's alt mode is a police motorcycle, though sporty rather than classic. The sculpting & details are nice, especially the translucent lights. But the deco is mostly plain white, so the addition of stickers helps. 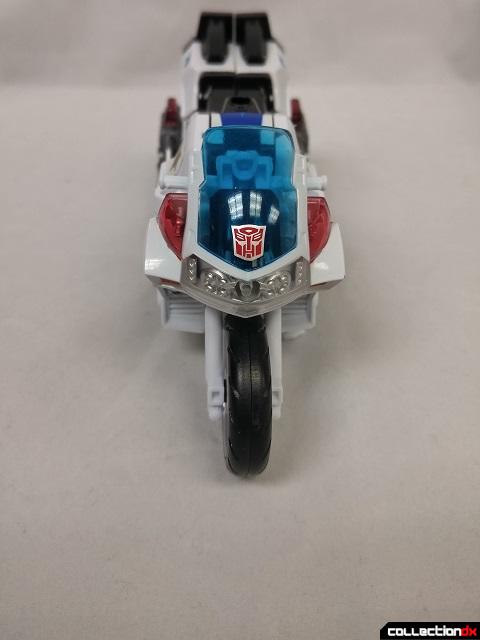 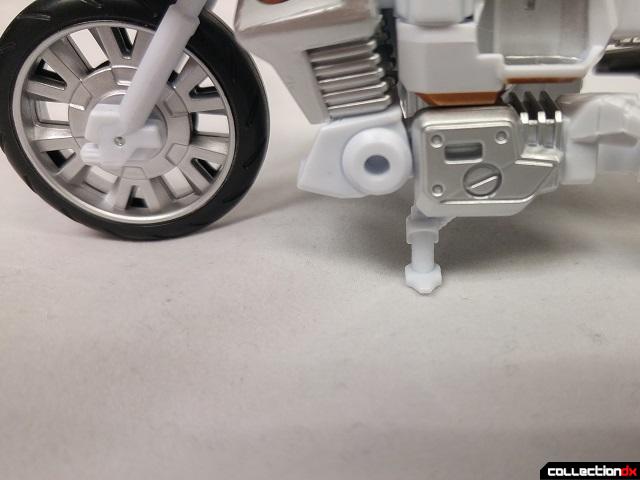 The wheels roll perfectly, and the kickstand is equally easy to use and functional. 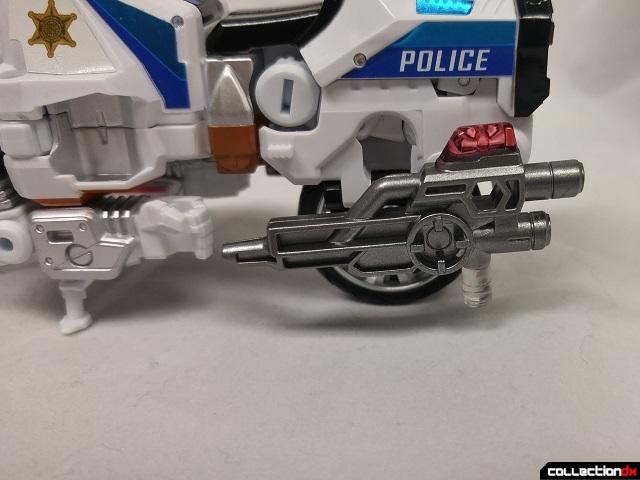 The guns peg into various places as well as each other, but they work best mounted to the rear. 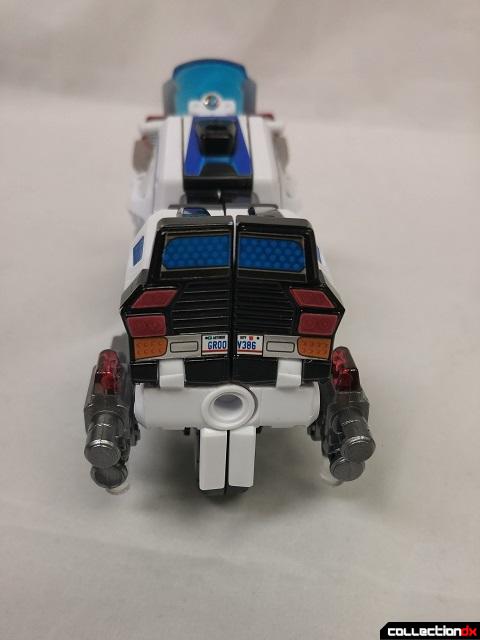 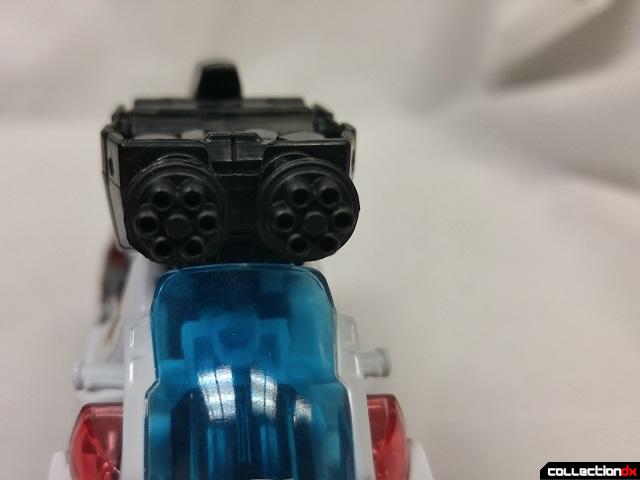 Same goes for his combiner weapon (same as all the helicopters), but it only works up top if you have both guns attached. 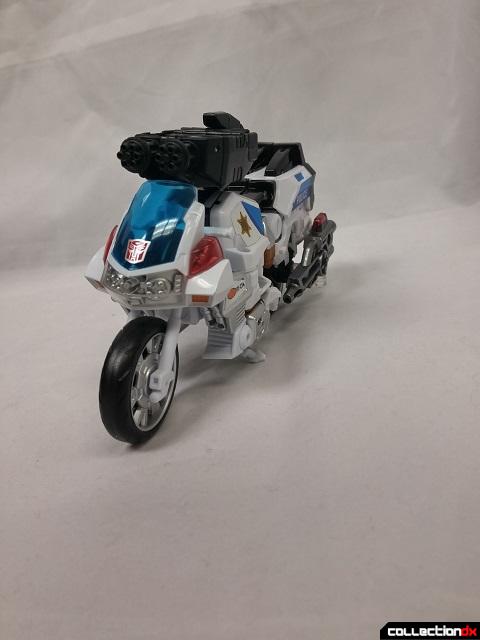 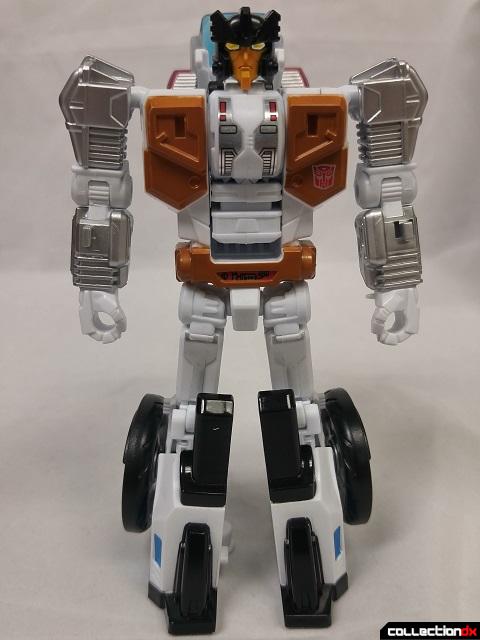 Transformation is enjoyable, not complex. The result is a hardy deluxe that has a different feel from the Hasbro designed figures. All his joints are the right kind of tight, except maybe his elbows. They're so stiff you'll need three fingers to work the hinges. Still, better that than loose.

He's got most of his signature look too: half-wheels on the outside of his forelegs, mostly gold chest plate w/ Autobot symbol on the left, gold face & eyes in black helmet, and the alt mode's front end hanging off his back. 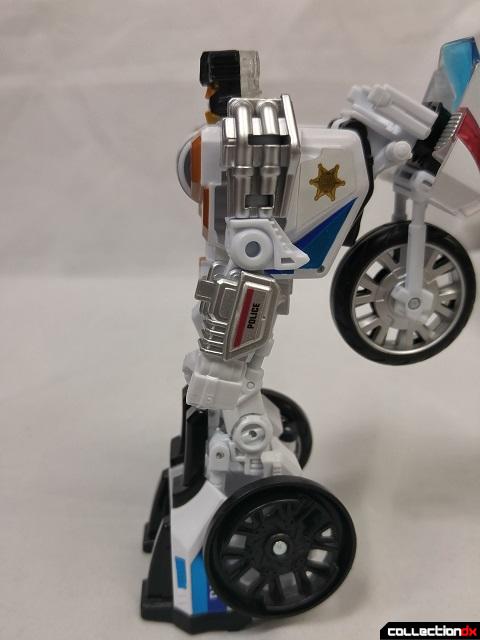 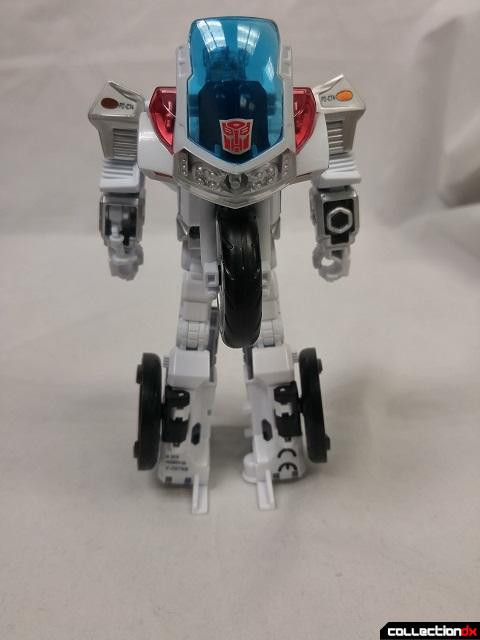 Nice and whole from any angle, he's very stable despite the backpack with some broad feet. Posing is no issue. You can also see why his light-piping is so good. 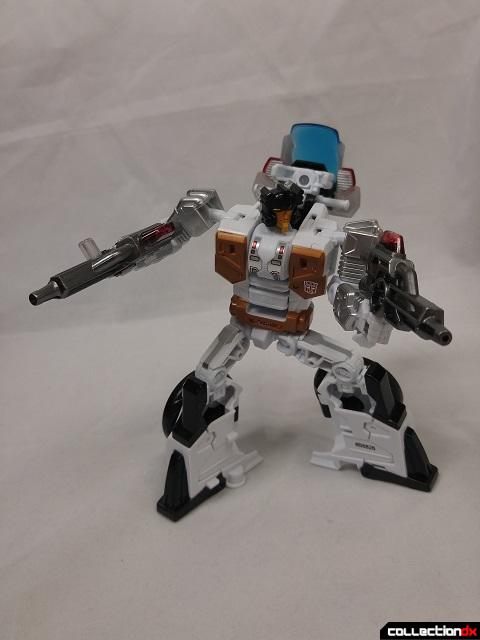 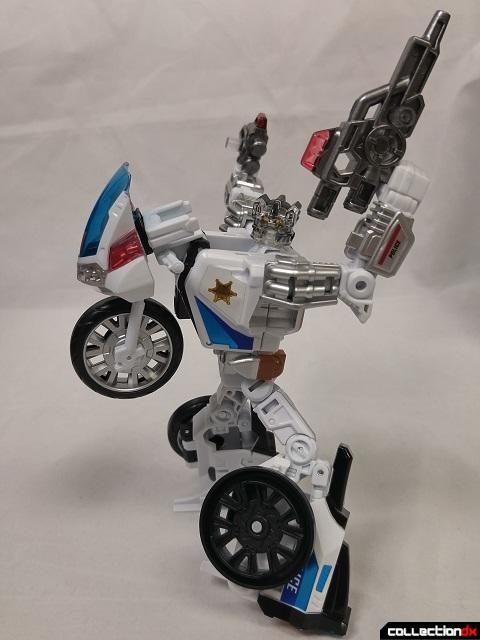 For weapons, he has various ways to handle both rifles, which are similar to the G1 toy's twin vaporators. 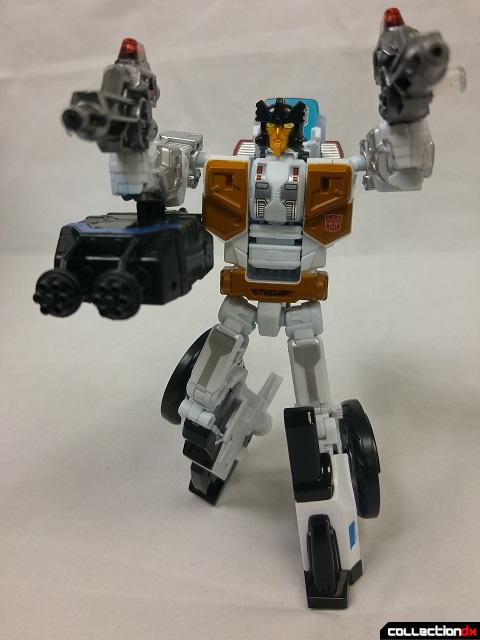 The peg hole on the bottom of his right forearm also aids his "at arm's length" firepower. 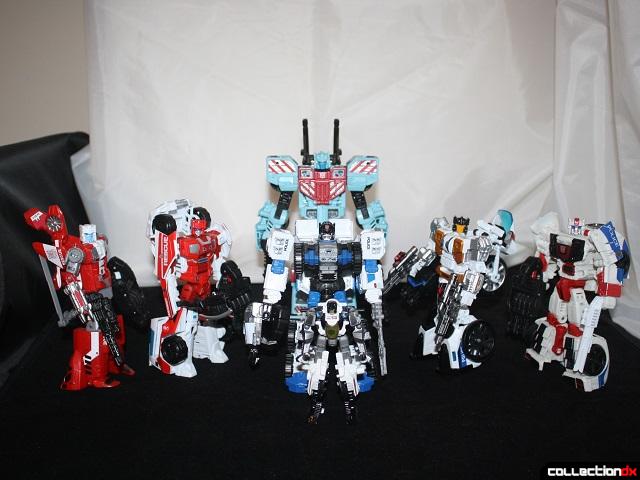 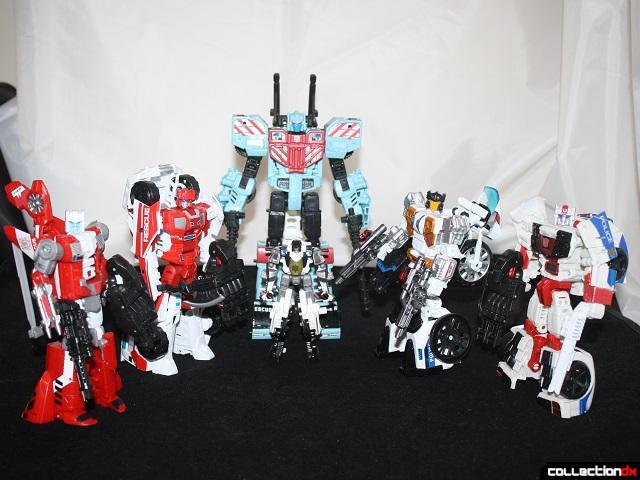 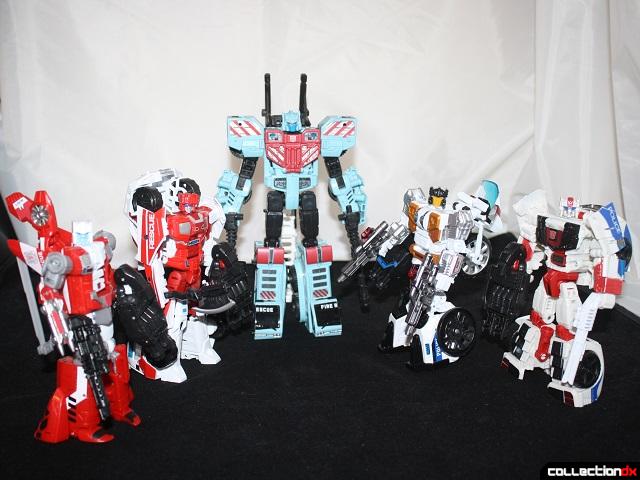 All good so far, but it begs the question, how does he fit with the rest of the Protecobots? The answer is quite well. He's the only gold in what's otherwise a red/white/blue ensemble, but that's always been the case. 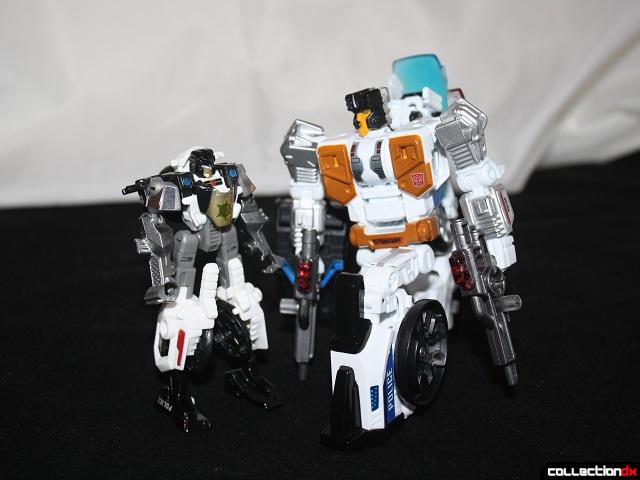 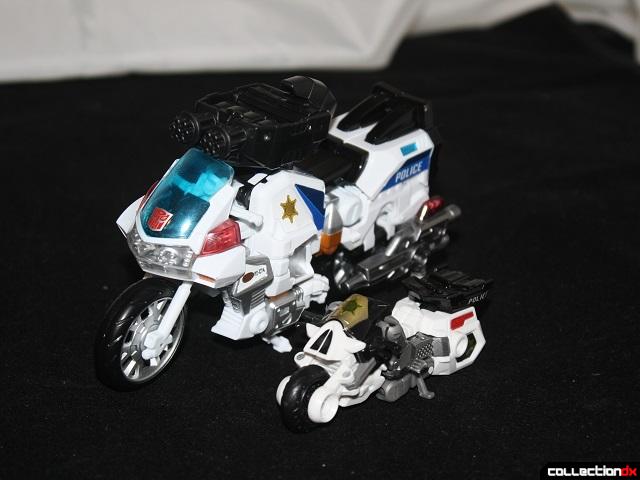 Compared to his legends version, there are a few similarities even though they're two completely different toys. 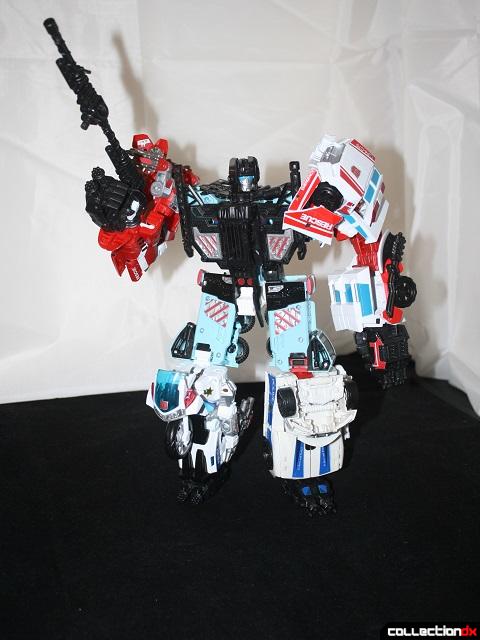 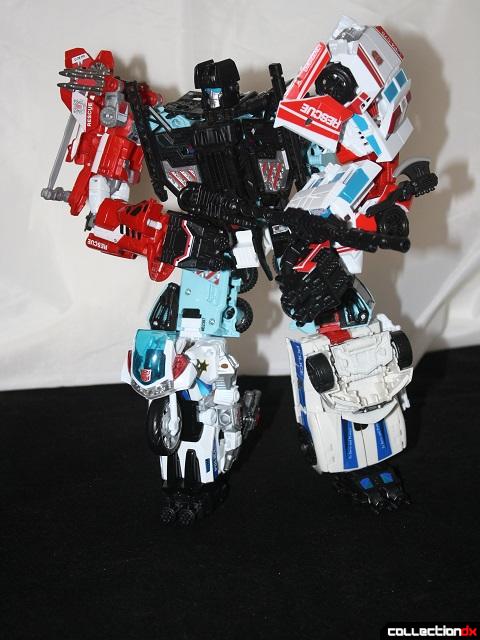 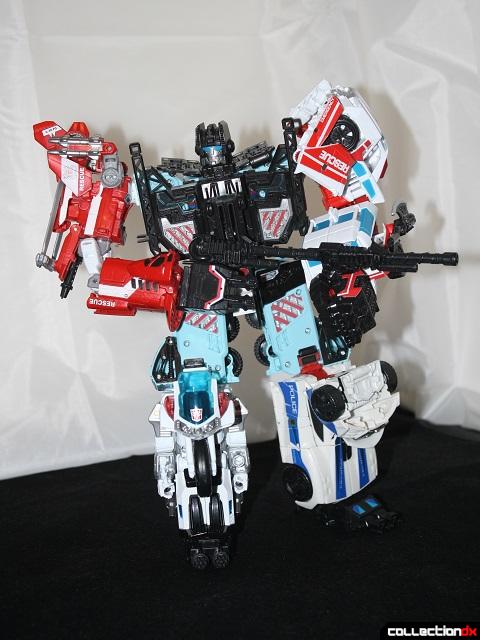 As for combining, like most of the CW deluxes, Groove can transform into an arm or foreleg for any of the Scramble City-type combiners. Typically, he's the right leg of Defensor, so that's how I used him. 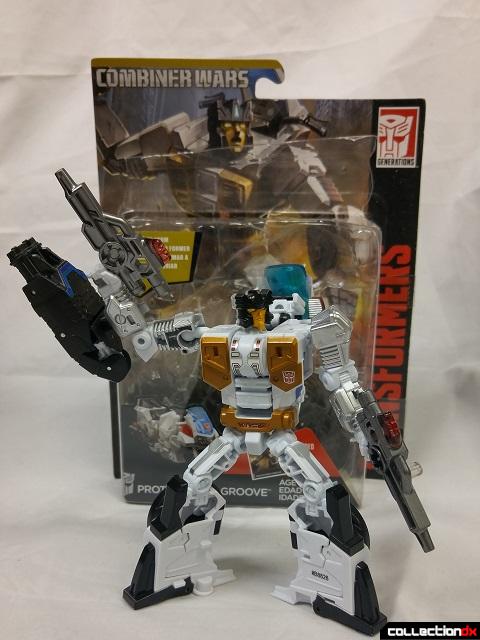 Great as Combiner Wars/Unite Warriors is, there's no denying one of the line's problems: repaints & retools. Post-Stunticons (only the 2nd team released), every team except for the Constructicons was littered with them. That's fine to a point, but the extent to which it was done made it easy for boredom & fatigue to set in.

To that end, Groove is a fresh breath of air among his peers. He's a good, original figure and a good update of his original toy, plus a major upgrade over the legends version. There was a bit of craze when he first came out, which made him hard to find for a while. But demand has settled, so you can still get him for $20+. If you've enjoyed Combiner Wars, he's a worthy purchase, but if you want the classic Protectobots lineup, he's a must-have.