A new Transformers series means a new cast of characters, but Hasbro gave us a pretty big surprise in the form of the new Autobot, Strongarm. Her design, to me is really great, if only this figure could've captured it.

In robot mode, Strongarm is definitely the right size but the proportions and colors are pretty different than in the show. Instead of a sleek feminine frame as she's normally depicted this figure is almost blocky, contrary to the rounded, "Transformers Animated" inspired shapes seen on screen. The arms are the greatest example of this, as contrary to the show they are thicker than Bumblebee and Prime's! In another strange twist, the arms and shoulders are also the complete wrong color, as they should be blue and grey, but instead they are a stark white. The head sculpts used on the other figures in the line are almost perfect renditions of their likenesses and personalities as Prime looks stoic and commanding, while Bumblebee's looks young and inexperienced. Strongarm's head sculpt Is... Problematic. Let's just say if it could reflect something it wouldn't be her personality. The paint on her head and chest is inaccurate as well, as she is missing the white highlights beside her face, and the white lines on her chest. 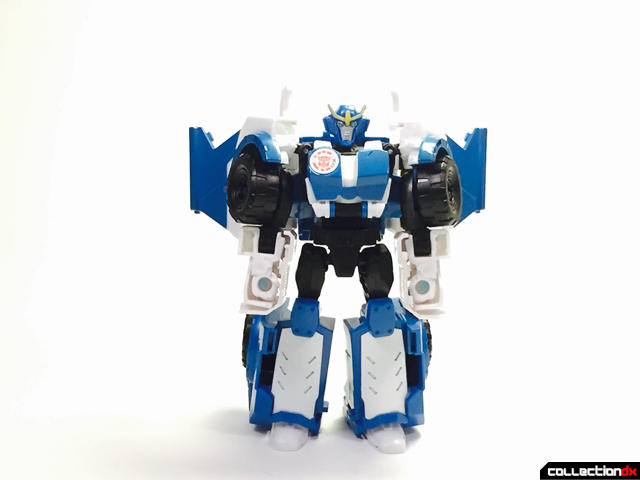 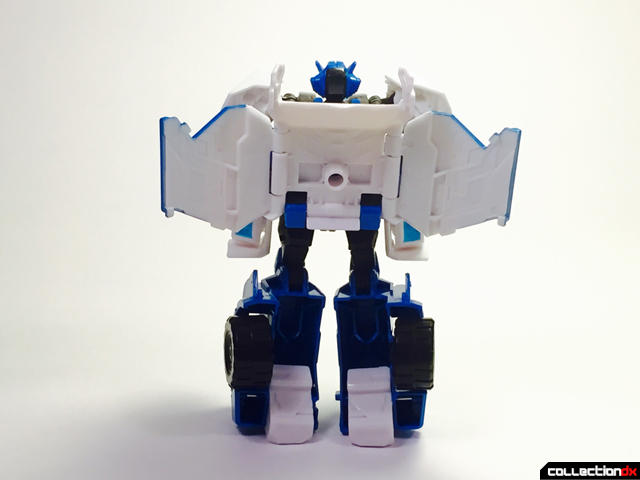 Seeing her next to Prime, she looks a little more show accurate due to her size in relation to him, but it just shows you how the alt mode could've folded up differently like "Transformers Generations" Arcee. 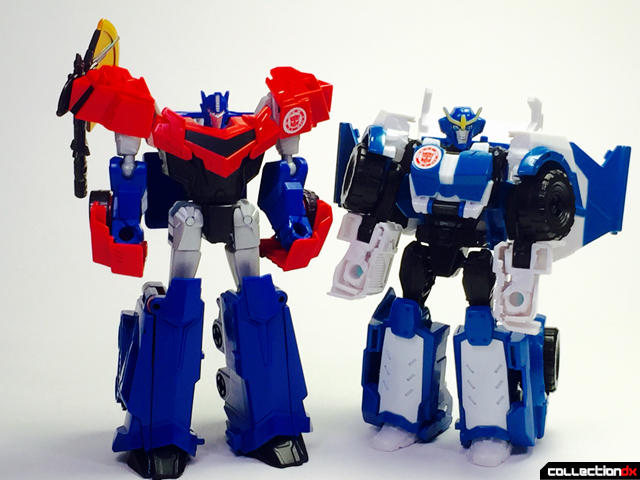 Articulation is functional, with the legs held on by ball joints letting them move all the way forward, and a little backwards. They also swivel at her thighs and bend at the knee over 90 degrees. The head is on a ball joint that gives it a great range of motion and the waist rotates as well but, the same can't be said for the shoulders as they shoot way too far back to stay straight, let alone pose realistically. The arms themselves bend at the elbow and rotate all the way around.

Strongarm also includes a gun that is molded in black plastic which would be pretty nice, but it has a light blue muzzle flash effect permanently attached leaving the only poses you can put her in while holding it is when she's firing it. 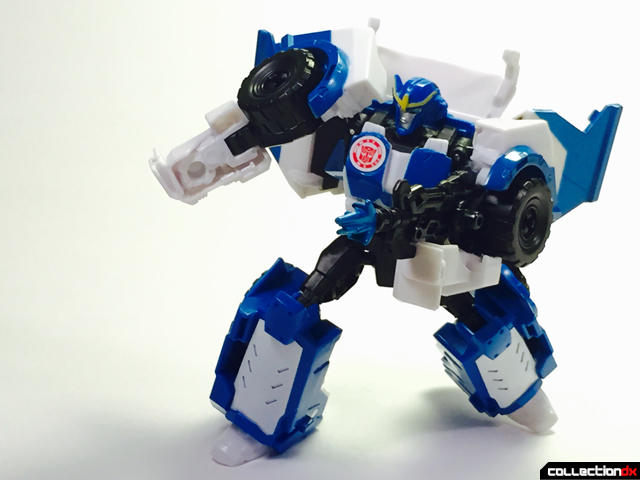 The transformation is simple and actually pretty nice. The forearms open up to form a truck grill, bumper and headlights that fold up and around to plug into pegs behind her head, burying it to form the full front of the vehicle. The legs connect together, and rotate around for the back pack to fold back and peg into them. The wing panels that were on her back swing down to complete the full alt mode, and lock all of the panels together. 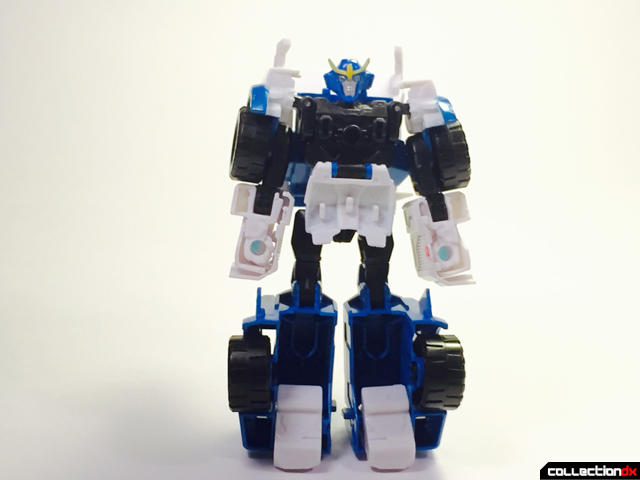 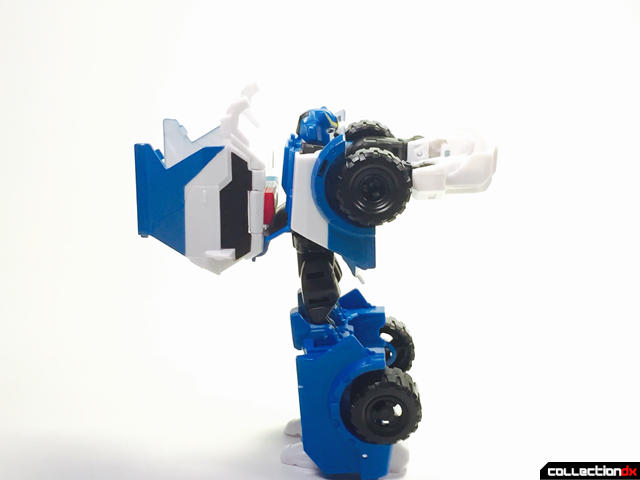 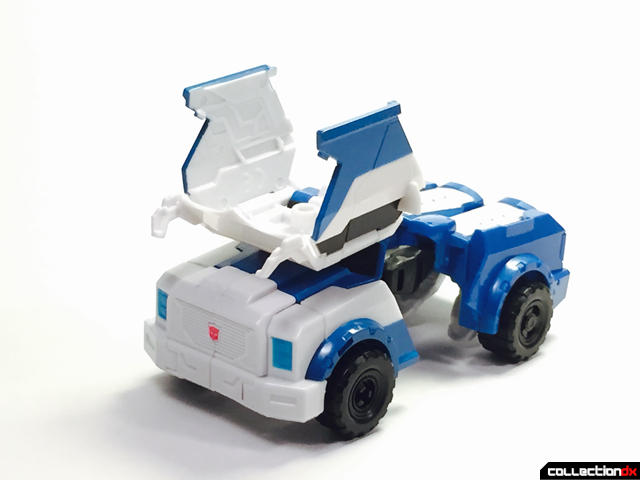 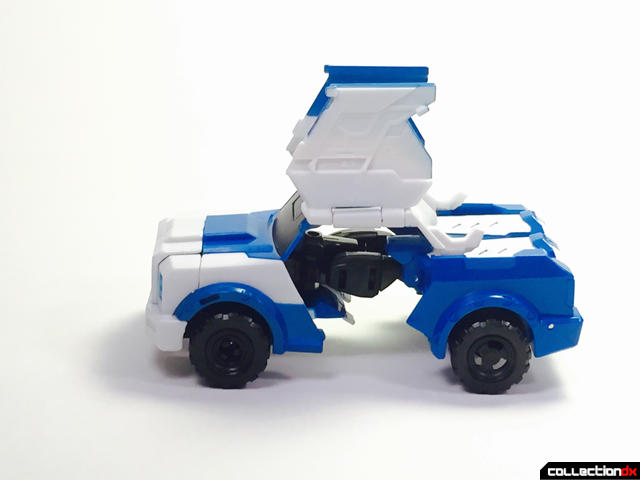 Strongarm in vehicle mode looks very good. Perfect proportions compliment A tough looking police truck with a vibrant red and blue siren. All the necessary paint details are well represented and applied with only a few spots in the back that illustrate hasbro's recent paint budget constraints. She rolls on four wheels held on by mushroom pegs that are molded with glossy black plastic. For a big vehicle like this, she is surprisingly light but you wouldn't guess that from the outside. In robot mode you would think they could do a bit more to accomplish her proportions in the show with how big this alt mode is. 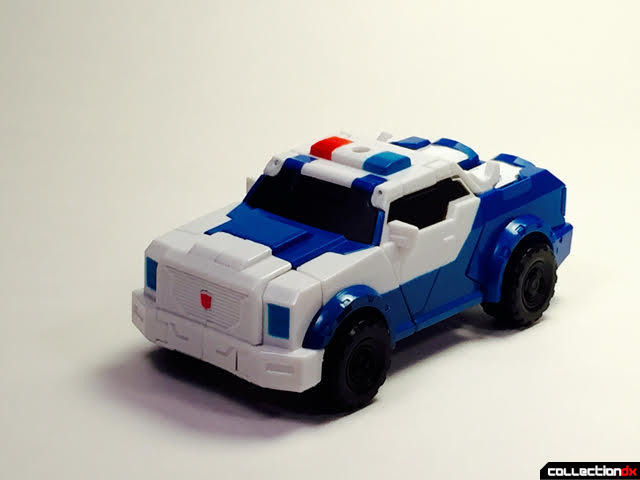 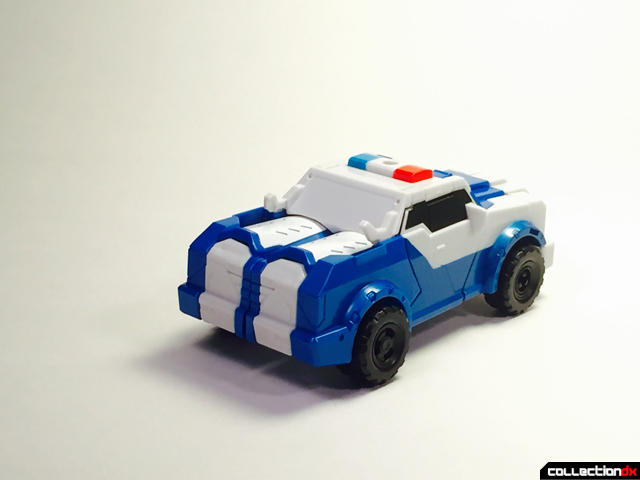 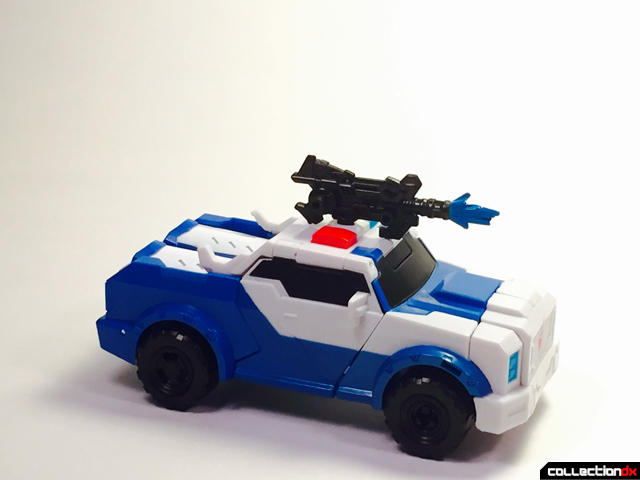 Next to Prime yet again, and Strongarm's alt mode is doing nothing wrong and looks great cosmetically speaking, but it does show you how small the Optimus figure really is. 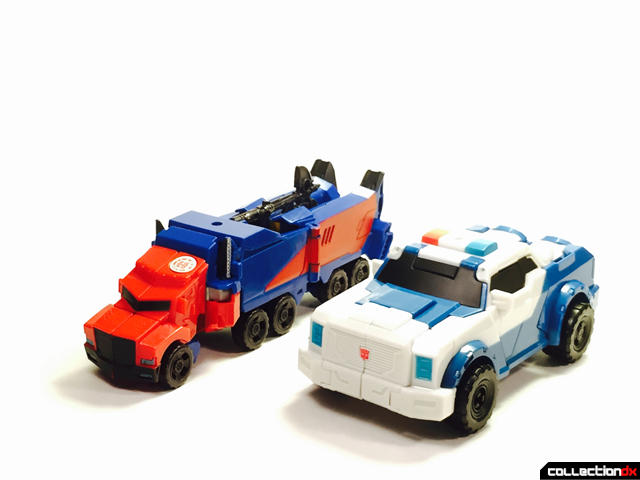 Strongarm is overall a good figure that could've been great. Her vehicle mode looks almost perfect but, the robot mode just isn't accurate to her on screen appearance at all. If you want this figure to complete your "Transformers RID" Autobots she is essential, but you sadly could pass it up for better figures if you want it separately. I was eagerly awaiting a Strongarm figure since her early 2015 inception, but the one that we have here is a poor representation of the character at best, and should be given another chance maybe, as a new mold.