Like most red-blooded American men, I grew up loving the movie Predator. It’s one of the greatest action movies ever made, one of the greatest Arnold Schwarzenegger movies ever made, and one of the most macho movies ever made.* Also like most red-blooded American men, I didn’t see Alien vs. Predator: Requiem. I didn’t even watch it as research for this review because a.) life is short, and b.) it’s not streaming anywhere and there’s no way I’m spending money to watch that thing. By all accounts, it manages to simultaneously be the worst entry in both the Alien and Predator franchises.

Curiously, the license has managed to produce some decent collectibles. NECA’s very first Predator figure was of the so-called “Wolf” Predator from Requiem. And it can be argued that NECA’s Alien Warrior from that line is the best Alien action figure the company has made.

And now here comes Bandai’s Tamashii Nations division, expanding their S.H.MonsterArts line of super-articulated, well-accessorized action figures beyond giant Japanese monsters. It’s not surprising they went with an Alien and a Predator for their first two non-kaiju offerings; they’re popular and history has shown collectors will buy them over and over. What’s odd is their choice of licenses: the Alien was based on the creature’s appearance in 2004’s Alien vs. Predator, while the subject of this review, Wolf Predator, hails from Requiem. (Be sure to check out my previous review of the Alien Warrior.)

Now a non-fan or even a casual fan of either franchise can be forgiven for wondering what difference the movie license makes. An Alien is an Alien and a Predator is a Predator, right? Well...no. Each movie has a slightly different-looking Alien and Predator, and many of us fans become attached to our particular favorite looks.

Tamashii selected two of the least-popular such looks for S.H.MonsterArts. Why did they go with these versions instead of more ones, e.g., Aliens or Predator? I can think of two reasons. They may have been unable to secure the rights (or at least, the U.S. rights) to make figures from any other movie (possibly due to NECA holding those licenses); or they hoped that the lack of articulated toys from these particular films would be more appealing than giving us yet another figure that NECA has already done several times over.**

The result is that we fans get a super-articulated, very well-accessorized action figure of the Predator in a look few fans really wanted. The question is, can the figure itself overcome fan indifference to the source material? 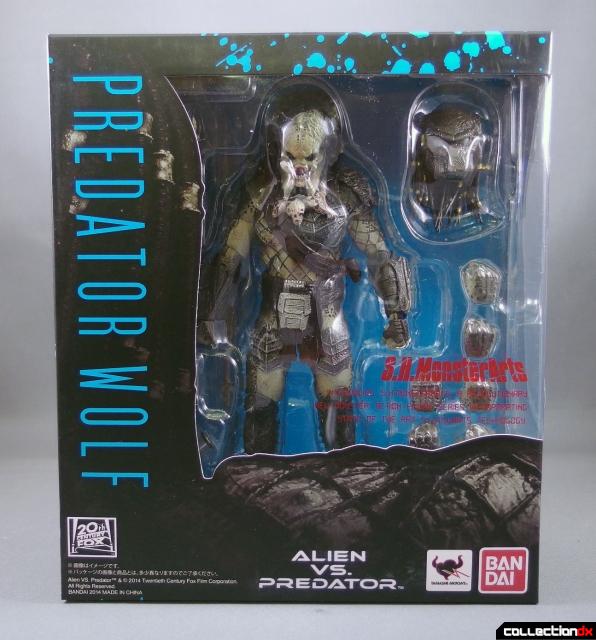 Packaging: The Wolf Predator (or “Predator Wolf” according to the packaging), hereafter referred to as Wolf, comes in a window box. It shows the selling point of the alternate head and the extra hands, but hides the weapons. I wouldn’t call it particularly MOC-friendly - the plastic inserts create a lot of glare surfaces that make it hard to get a good look at the figure.

Inside the box are a number of trays to hold all the parts and weapons. You can get everything back in their spots with some effort, so it’s collector-friendly in that regard. 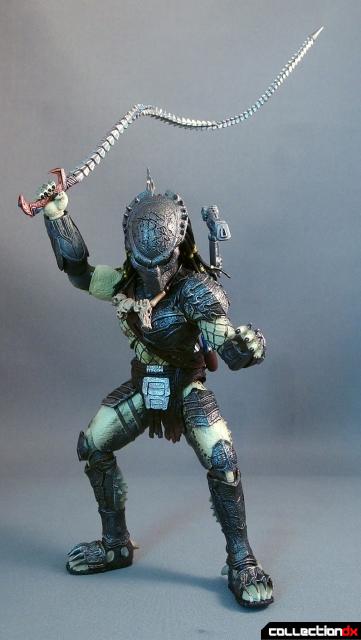 Sculpt & Design: I can’t and won’t fault the sculpt. It’s excellent. It’s the sort of heavily-detailed sculpting you expect from NECA or McFarlane Toys. 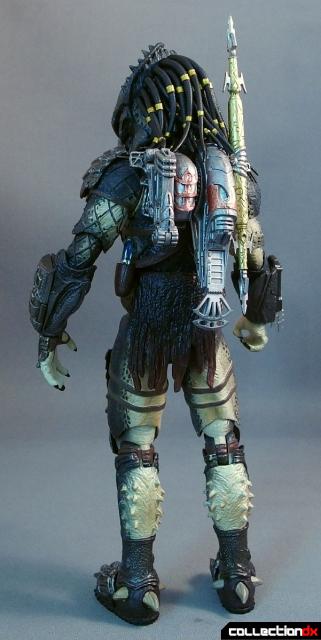 Again, I haven’t seen the movie, so I can’t speak to the accuracy of the sculpt, but it looks good to me. I’ll just let the photos speak for themselves. 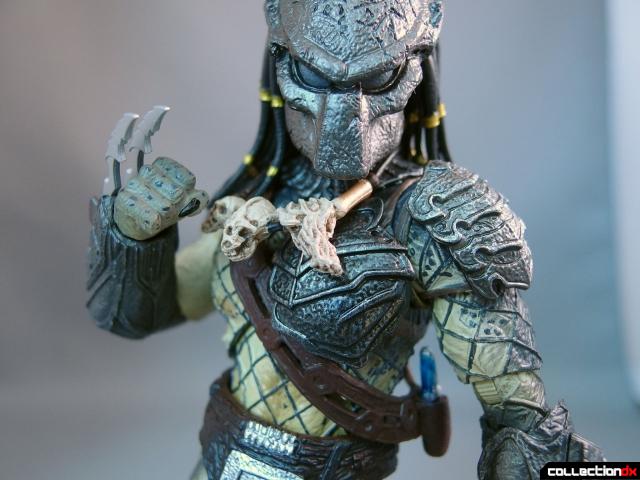 I’ll discuss the accessories and the articulation separately, but as part of the figure’s “design,” I should mention the flip-open left gauntlet. In the original film, this was used to set off the Predator’s self-destruct button. Presumably it does the same thing in Requiem.

Plastic & Paint: The figure is molded from PVC and ABS plastic, although most of the silver armor is made from diecast metal. Like most Japanese figures, it feels a little different than an American action figure, because more ABS and less PVC is used, giving it a less “soft” texture. 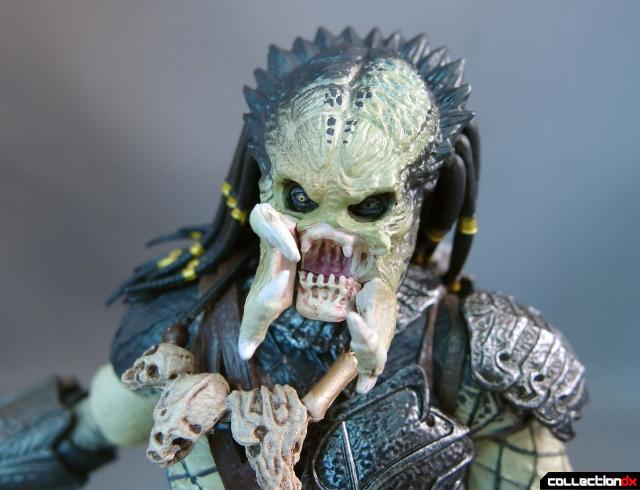 The paint applications are detailed in design, but as often happens, something was lost in the transition from prototype to production. Check out the proto photos of the Predator’s face here and then compare them to the one above. The paint on the production figure’s head is much sloppier and uneven, with a lot of extra green on the right side of the forehead.
The paint problems are far less noticeable on the rest of the figure, which are on par with NECA. But at this price point, I think it’s fair to expect something a bit closer to the prototype. 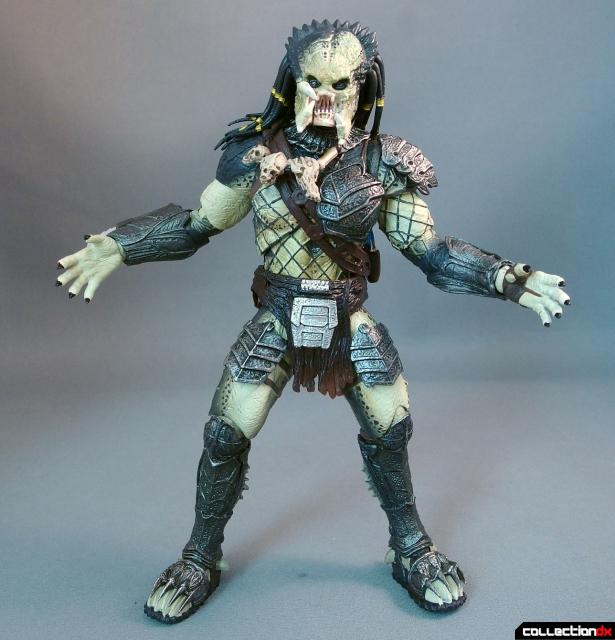 Articulation: This is where a lot of the money went on this figure, and is one of its main selling points. As with the Alien Warrior, an exhaustive list of the joints would take a lot of testing and require a more intricate engineering vocabulary than I possess, so instead I’ll discuss it generally.

The figure is, as you’d expect, extremely poseable. The arms have double-joints so that the forearm can be brought nearly parallel to the biceps, which I find important for dynamic poses. The head is a ball joint, although the range of motion is understandably limited by the plastic “dreadlocks.”

You can do some fun poses with this figure, and certainly more than you can get with a NECA Predator. It has all the articulation I could want for this character with one notable exception: the feet. There’s no toe articulation, and due to the greaves the ankles can’t move forward very much. This means the S.H.MonsterArts Predator, just like the NECA Predators, cannot do the classic “gargoyle crouch” pose. Whether or not this matters is up to the collector, but it’s something I’ve always wanted out of a Predator figure, and I’m mildly disappointed that this figure can’t do it. 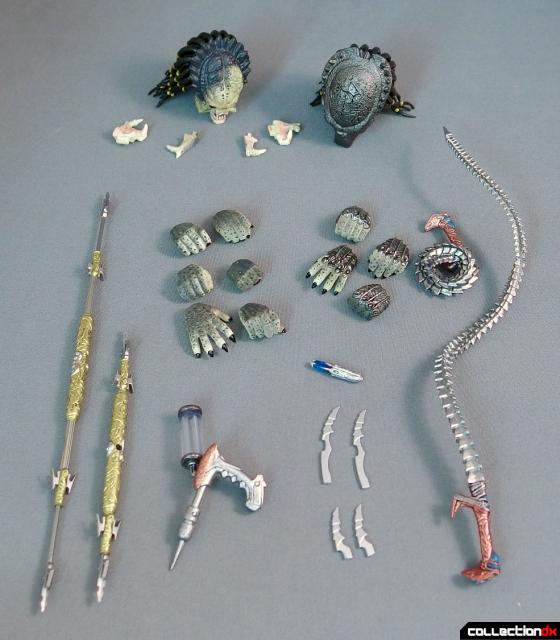 Accessories: This is the other selling point of the figure. While the Alien Warrior came with an egg, a chestburster and a few extra hands, the Predator comes with:

A tiny bottle of blue stuff

The figure is loaded. It makes the Alien’s accessories look all the less impressive by comparison.
The weapons are great. They look good, they all have their own paint applications, and they work well with the figure. The condensed spear can be stored on the figure’s back, and the coiled whip can be attached to his belt. 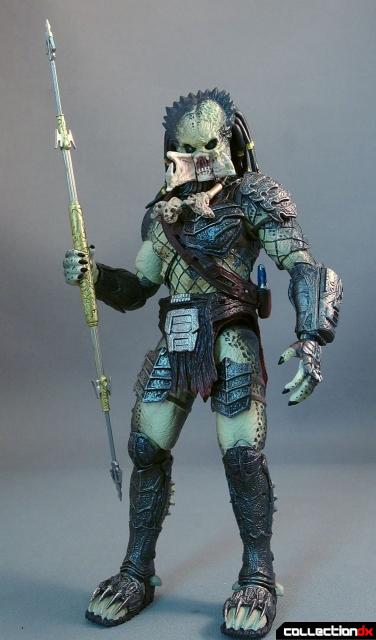 Not having seen the movie, I don’t even know what half of this stuff he comes with is. 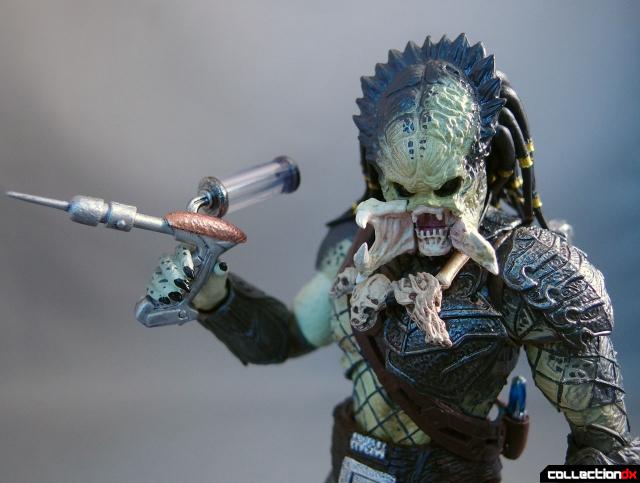 The syringe is presumably something the Predator uses to heal himself, or perhaps to prepare his victims for skinning. 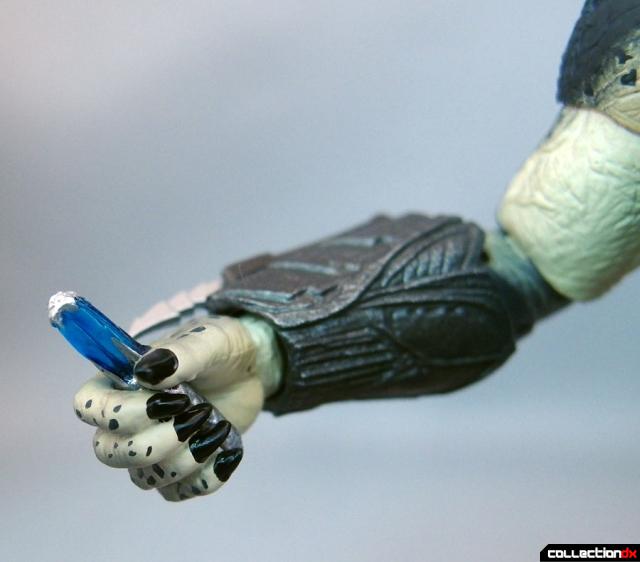 I think I read somewhere that the blue vial contains some sort of acid the Predator uses to erase evidence of himself and/or the Aliens. Anyway, the vial can be stored in a little pocket on the Predator’s side. Let me repeat that - this tiny vial of blue gunk can be removed from or stored in a tiny pocket on the figure. That is attention to detail, folks. 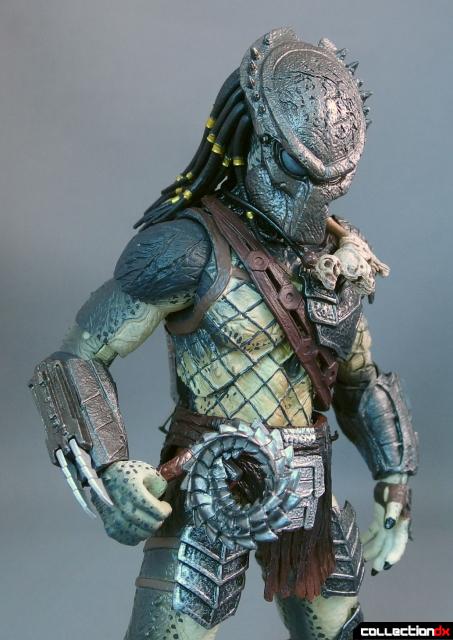 It’s nice they include so many extra hands, which allow for lots of expression. However, as with the Alien, the hands do pop off quite easily. The plasma caster is very well-articulated and looks great.

The gauntlet blades are mildly disappointing. They’re plastic and quite small. You swap them out to have “retracted” or “extended” blades. The (actually) retractable blades on NECA’s figures are much more fun. I suppose Tamashii did the blades like this to make them as realistic as possible, but they look small and feel fragile. Diecast retractable blades would have been awesome. 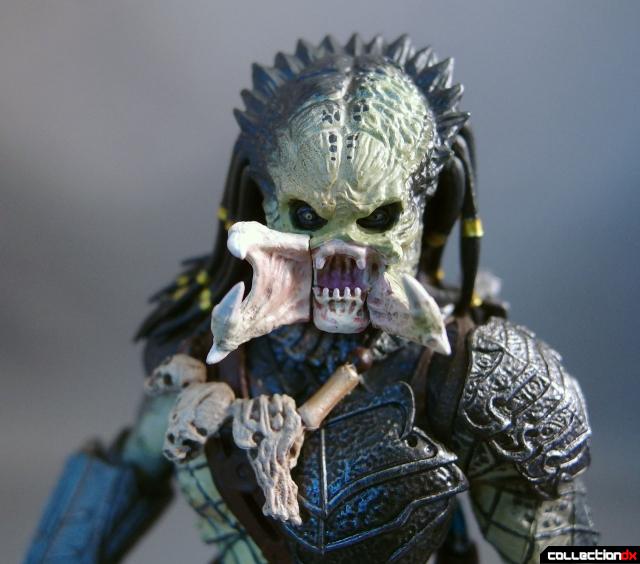 Finally, there are the interchangeable tusks, which allow for both closed-mouth and roaring expressions. It’s a nice idea, but I think this is a case of too much of a good thing. The seams where the parts detach are really visible and detract from the figure’s look. More annoyingly, they fall out constantly.

Finally, there’s the interchangeable masked head. Due to the ugly look of the unmasked head, I greatly prefer the masked one. Just one caveat - swapping the heads is tough, as it takes a lot of angling to line up the peg with the socket, and then a lot of pressure to get the head to click in. 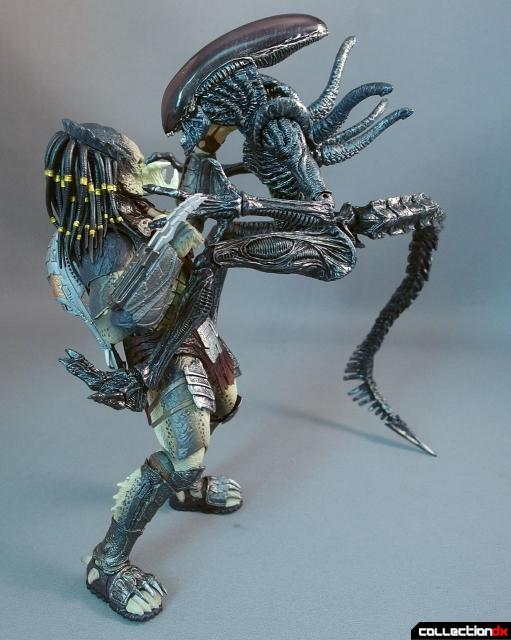 While the individual joints of the figure are fairly tight, putting the accessories into place and getting the figure into a pose can be a bit like playing Jenga. The hands pop off easily, and while I was swapping the heads the bone necklace constantly fell off, so that by the time I managed to push the dang head on, I realized I’d forgotten the necklace and had to pop the head back off.

As mentioned, the tusks will fall out if you breathe on them, and if you put the spear on his back or the coiled whip on his belt, you’ve got to be careful when posing him or they will pop off. To be fair, this is standard operating procedure with many Japanese action figures. They’re not actually that fragile (except for the wrist pegs), but they feel fragile and loose. I suspect a lot of casual collectors who are used to NECA’s offerings will be interested in these, so it’s good to go in being aware of this aspect of the figures. 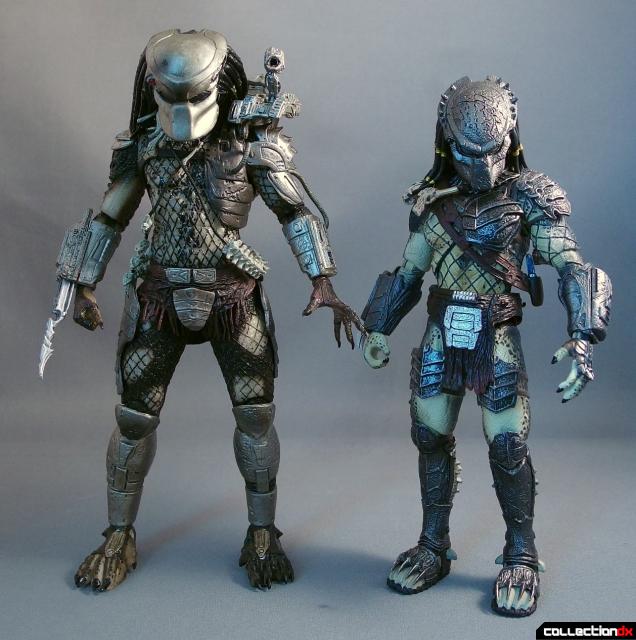 Overall: Considering their price point of $50, these S.H.MonsterArts figures are a decidedly mixed bag. The Alien Warrior worked out pretty well, but it had far fewer paint applications than the Predator. When compared to the prototype photos, the Predator’s paint apps (on the head, at least) are disappointing.

The Predator features a great sculpt, a lot of articulation and tons of accessories. That may be enough to sell him to many collectors. But with NECA producing cheaper versions of these characters in more iconic looks (with lesser but still decent articulation), I think these are a hard sell. And yet, Tamashii has already announced the upcoming release of a “Heavy Armed” version of this figure with extra weapons--an odd choice, as it seems to render this figure moot.

So far, there doesn’t appear to have been a lot of interest in these figures here in America. I think competition from NECA, the price point, and the specific licenses are to blame. I’m curious to see how much interest there will be in their next Western S.H.MonsterArts figure: the Alien as it appeared in the original film.

* And possibly the most homoerotic movie ever made, with the possible exception of Commando.

** The next S.H.MonsterArts Alien will be based on the original film and NECA just put our their second version of that particular alien suit, so evidently Tamashii either worked out the licensing rights or decided they weren’t concerned about the competition.