Tokumei Sentai Go-busters is part of Toei’s Super Sentai series. The show began airing in 2012 and unfortunately was a failure by Super Sentai standards. Ratings were low and toy sales were not very good either. So I was a bit surprised when Bandai announced that it would be producing a train in the EX Ressha Gattai line for the Go-Busters, to accompany the train’s appearance in the Kamen Rider Taisen ft. Super Sentai movie. As it turns out, Bandai will actually be making unique trains for each Super Sentai from Engine Sentai Go-Onger to Zyuden Sentai Kyoryuger. So it seems Bandai made the Go-Busters Ressha in order to avoid skipping a Super Sentai from that line up.
The EX Ressha Gattai Go-Busters Ressha is a nice little train that you can pick up for about $10 plus shipping.  The design of the train is based on Red Buster’s Buster Machine CB-01, the car with the cheetah head. 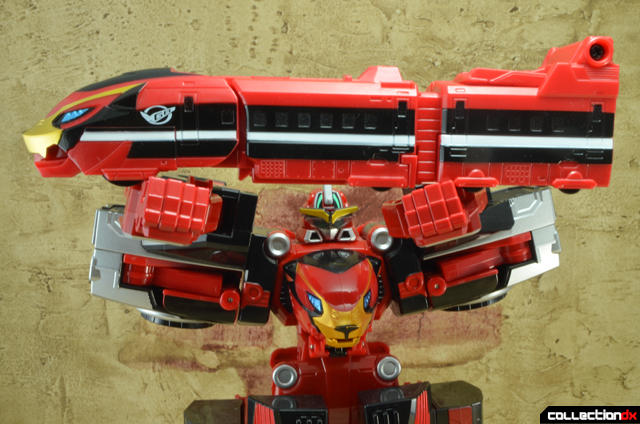 The Go-busters Ressha has some nice molded details- windows, doors, etc. - and some decent paint apps.

Most of the issues with the paint applications are only noticeable if you look super-close. However, with my train, there was one obvious oversight. 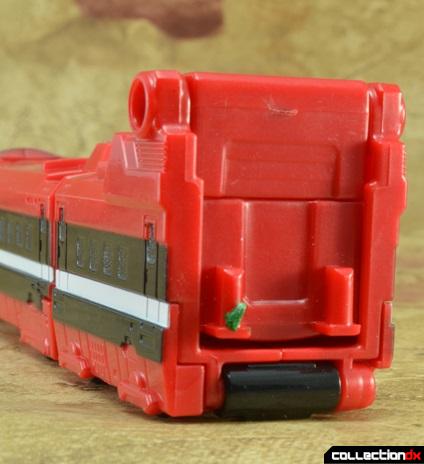 There is a dab of green paint at the rear of the train. It looks like it should be easy enough to take off, but it is a bit annoying that they let something so noticeable get through QC.

Minor issues aside, I think the Go-Busters Ressha looks better than the Kyoryuger Ressha. The sleek design of the cheetah head at the front of the train fits better with the design and shape of the rest of the train. As part of a promotion, I could see a Japanese express train actually being painted in such a manner that it resembled what this train looks like.
The eyes of the cheetah are a nice shiny blue and the Go-Busters logo on the side of the “cheek” of the cheetah. 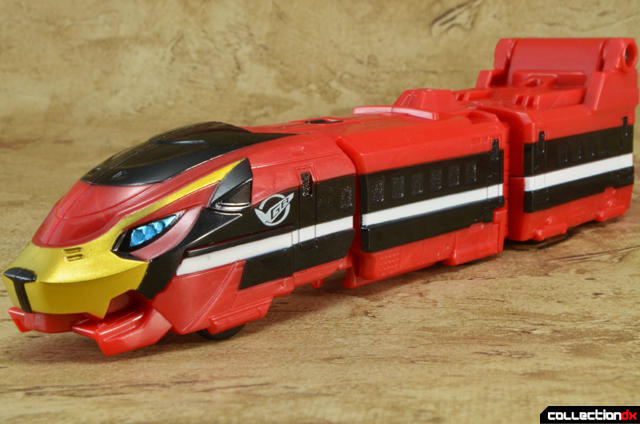 The underside of the Go-Busters Ressha features the usual hitches and stuff.

The top of the train is rather plain.

The train can be split into two pieces and you can hitch together the two parts, and also hitch these pieces to other trains in the Ressha Gattai series. 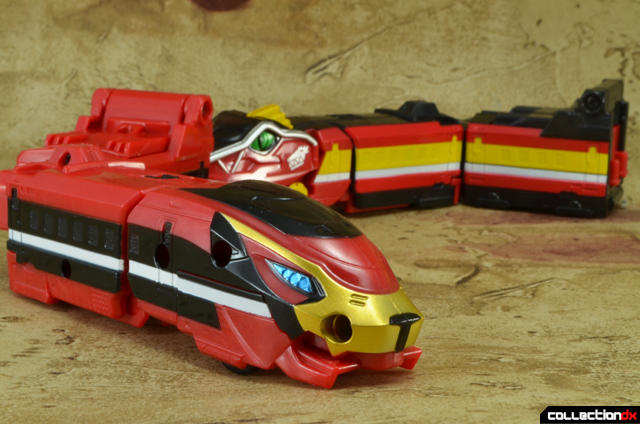 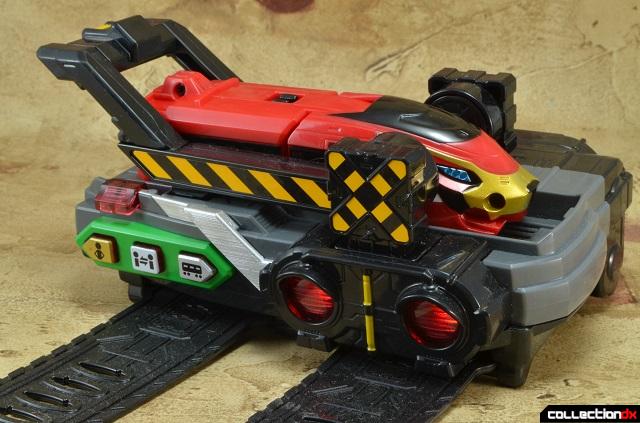 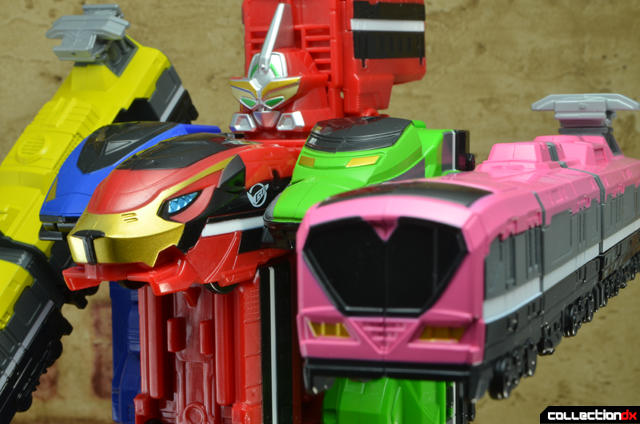 Much like the Kyoryuger Ressha, you can combine to Go-Buster Ressha with the ToQ-Oh for its own (kind of) unique combination, known as the ToQ-Oh Go-Buster Ace. 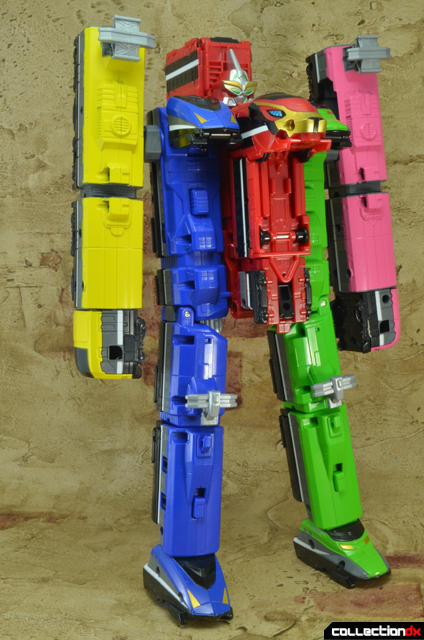 The cheetah head makes a nice chest piece for the ToQ-Oh. However, the face of Go-Buster Ace leaves much to be desired. 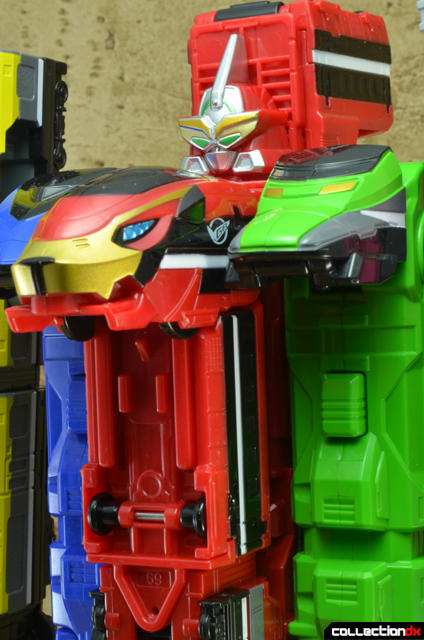 The face’s sculpt and paint applications are a bit off from the original's head. 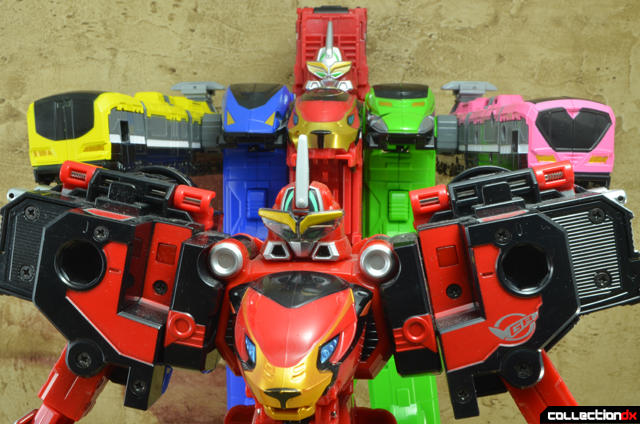 I wonder if Bandai knew that the fan base for the Go-busters Ressha would be more limited and just didn’t put as much effort into the sculpt and paint of the Go-Buster Ace head. Considering that this train does sell for 10 bucks, I can somewhat forgive Bandai for the fact that the Go-Buster Ace head leaves a bit to be desired.

As with the Kyoryuger Ressha, you end up with a big piece of plastic train sticking out of the back of the ToQ-Oh. 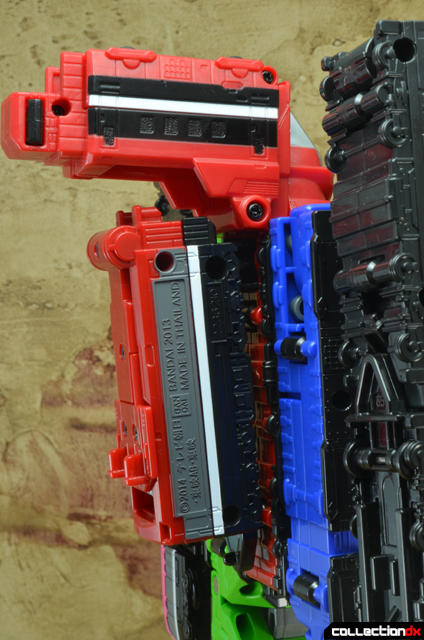 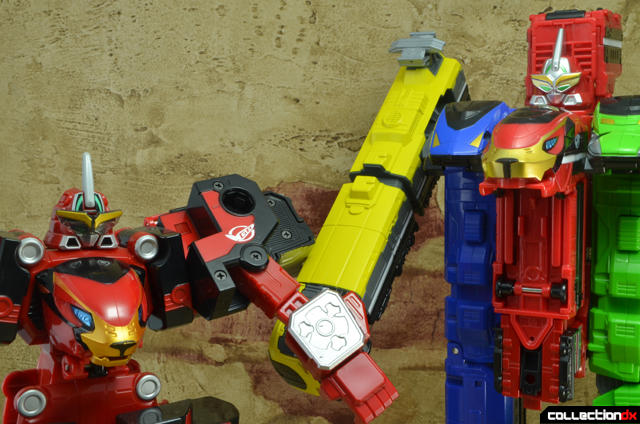 So all in all, the Go-Busters Ressha is a decent purchase for the price. While I have a greater affinity for the Tokumei Sentai Go-Busters than Zyuden Sentai Kyoryuger, I have to admit that the Kyoryuger Ressha is clearly the best of the train of the two.  The Kyoryuger Ressha has the superior sculpt and paint apps. It also has the ability to open its mouth, so it has slightly more play value than the Go-Busters Ressha. That being said, both trains are cheap enough that you can get both without breaking the bank.

I leave you with a Cheeta chub. 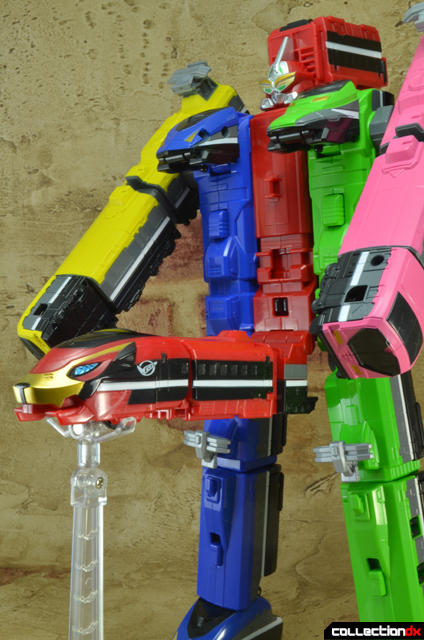