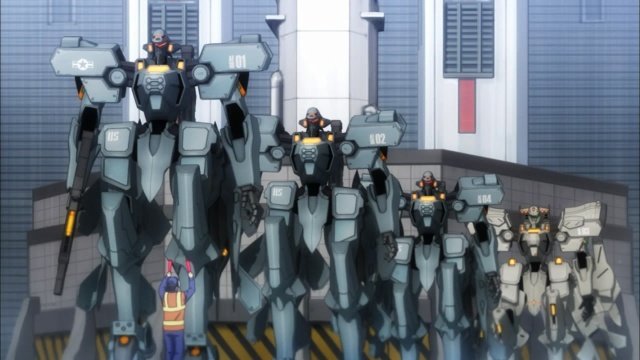 The members Argos Test Flight ready their squad of Strike for a mock battle. The machine on the far right is the experimental Active Eagle.

Any franchise where the robots are treated like mass-produced weapons is ripe for repaint potential and Muv-Luv is no exception. The Muv-Luv Total Eclipse anime got me hankering for my own squadron of Tactical Surface Fighters and with a little luck I was able to acquire both the TMC and A3 versions of the F-15E Strike Eagle. In the Total Eclipse side story, the pilots of Argos Test Flight have a handful of Strike Eagles which they mostly use in training exercises or for real combat in case of emergencies. After a trip to Russia turns dangerous, it's up to this eclectic group of pilots to band together and get out of there alive. 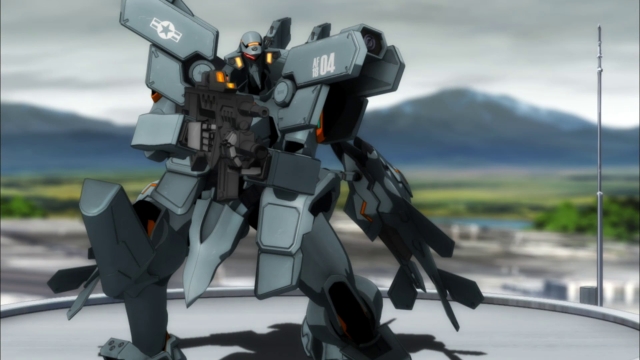 Argos 4 (Stella Bremer) sets up for a long range attack with her Strike Eagle in order to save fellow pilots Yuuya Bridges and Yui Takamura from the vicious aliens attempting to end the latter two's romantic moment. 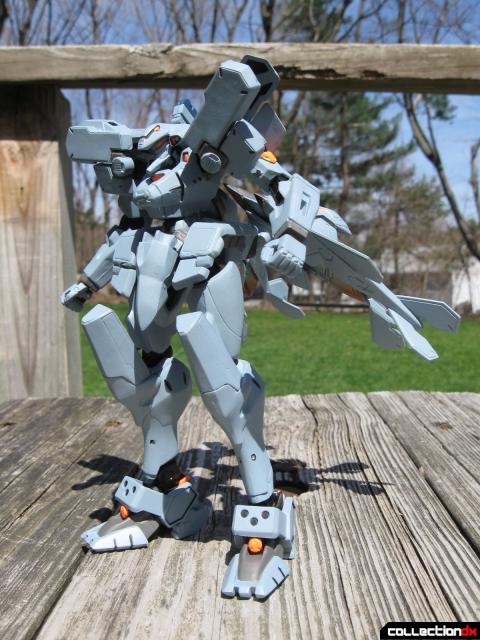 So here is the other half of my tandem Strike Eagle reviews. The TMC F-15E Strike Eagle is a lower cost revamp of this figure: the A3 F-15E Strike Eagle. Other than the materials used in their construction, they're practically identical so I will try not to repeat myself too much. The A3 Strike Eagle is made from a slightly softer PVC plastic and is painted in a bluish gray color that in meant to invoke the look of a combat aircraft. Since the A3 version is covered in paint from head to toe, the fine details can appear slightly softer than the color molded TMC figure. Both are still striking renditions of the design. I actually got these figures months apart but unforeseen delays prompted me to just cover them both at the same time. Since they are technically from different toy lines I feel like it wouldn't be right to cover them in the same review like with the F-16's so please bear with my double dipping. Plus it was such a nice day outside I just had to take advantage of the first good toy photographing day in a while. 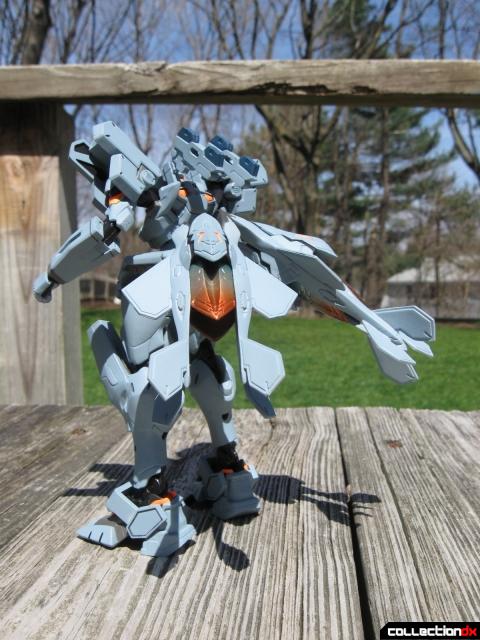 This Strike Eagle's more matte finish is a little basic but gives the figure the feeling of a military model kit. It's a fairly dense feeling figure and weight wise is a bit more balanced than the TMC version. 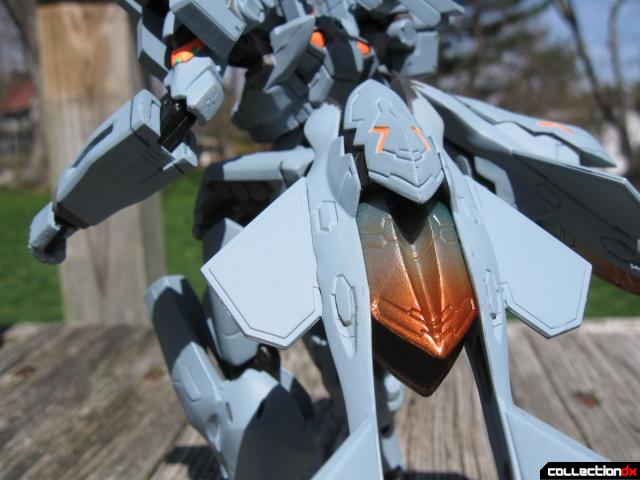 Again the burnt metal detailing on the engines is a great touch. 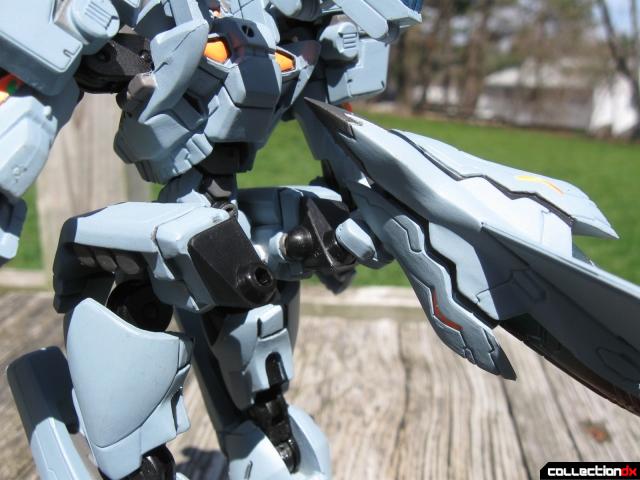 On this figure the jump units attach to small black mounting brackets that plug into the skirt armor. These seem to be made out of the same smooth black plastic as the figure's A-Lock joints. Consequently, once inserted the brackets seem to have a death grip on the skirt armor so I won't be trying to remove them anytime soon. 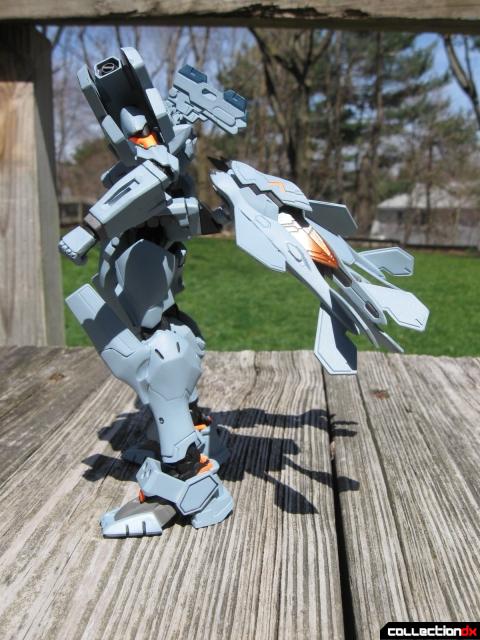 As one of the earliest A3 figures, the Strike Eagle uses a simple strut for attaching the jump units to their mount. This doesn't afford them a lot of articulation so they are almost always pointing out at an angle. I give the figure props for being able to stand like this with minimal crotch thrust. 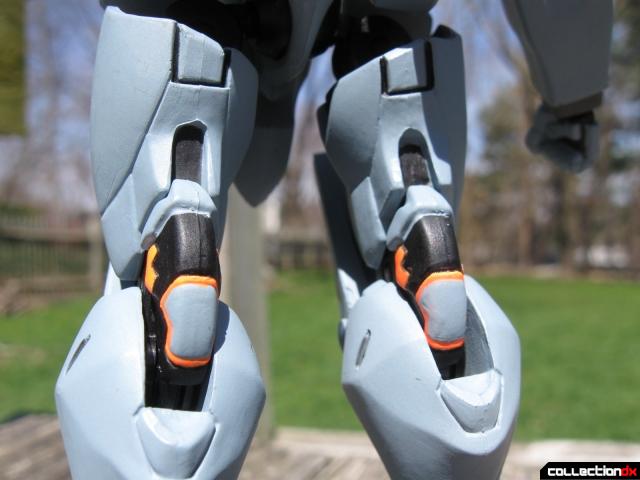 For the detail oriented fan, there backs of the knees have optional fill in parts that immobilize the joint for the sake of line art accuracy. 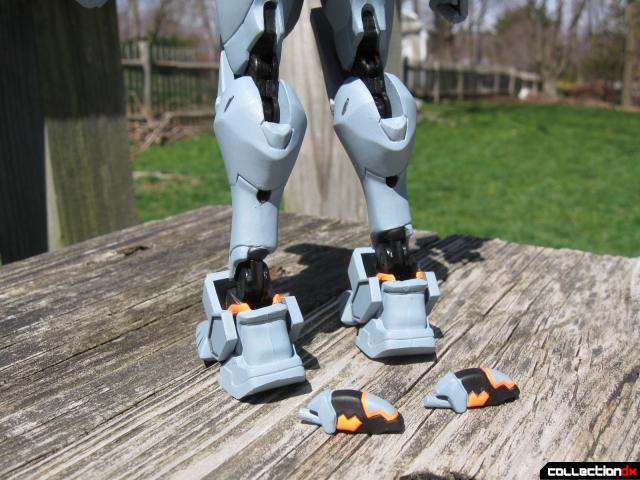 We can't have deep cuts in the calves like those unwashed Revoltechs now can we? At least this gives me two whole pairs of tiny beetle based Zoids. 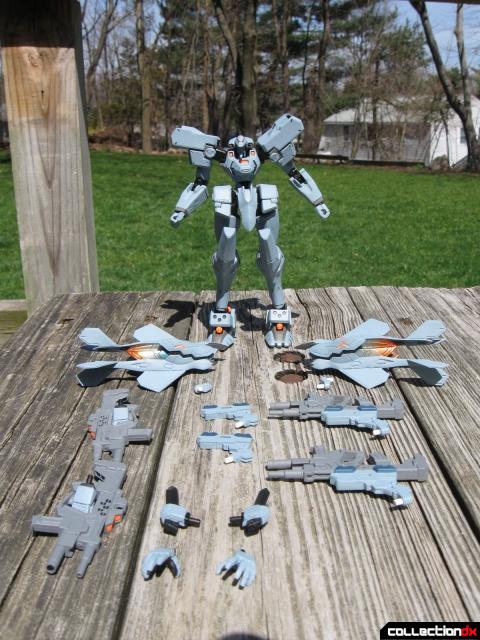 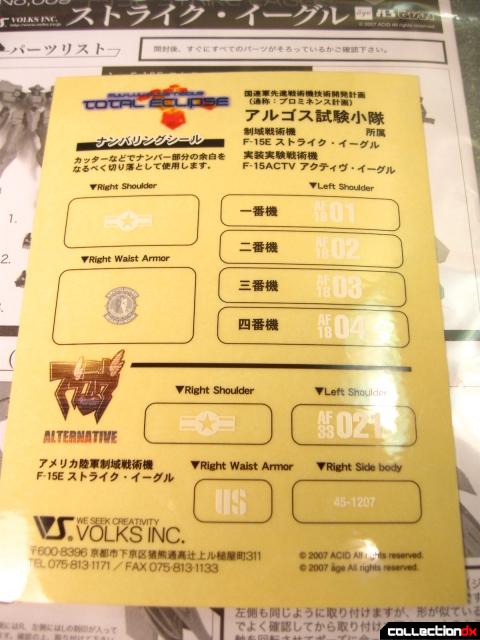 It also comes with a sheet of clear decals with markings for Strike Eagles from both Muv-Luv Alternative and the Total Eclipse side story. Despite being sticky type decals, they have no obvious seam lines... 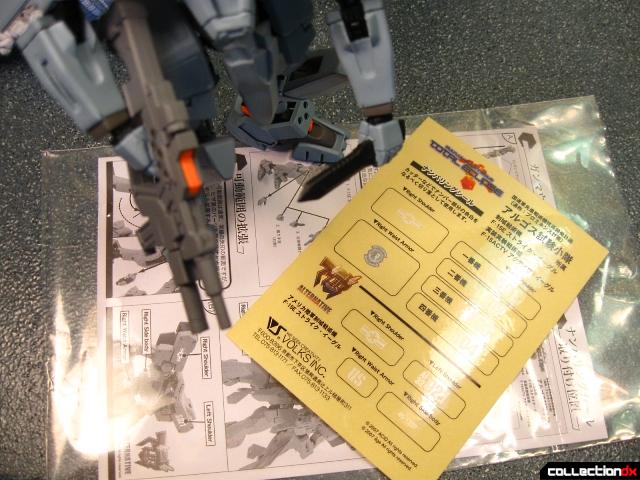 Snake! You're going to have to use your pen knife. Did you know pen knives are called that because they look like pens?

"Huh. You could conceal one just like a pen couldn't you?!"

"Looks like the pen is truly sneakier than the sword!" 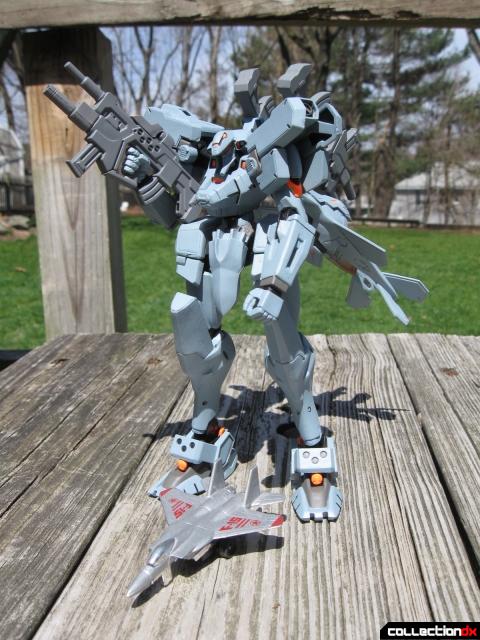 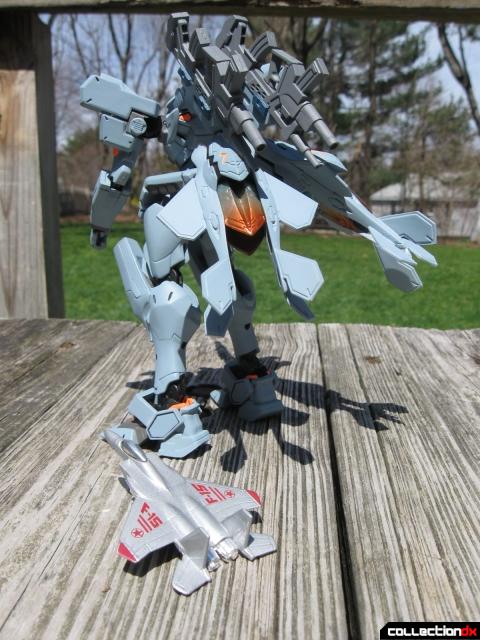 The robot-ified Strike Eagle still manages to invoke the spirit of its real life namesake. Sadly it does not have the Katoki-esque "my own name" tattoos like my little diecast F-15 here. 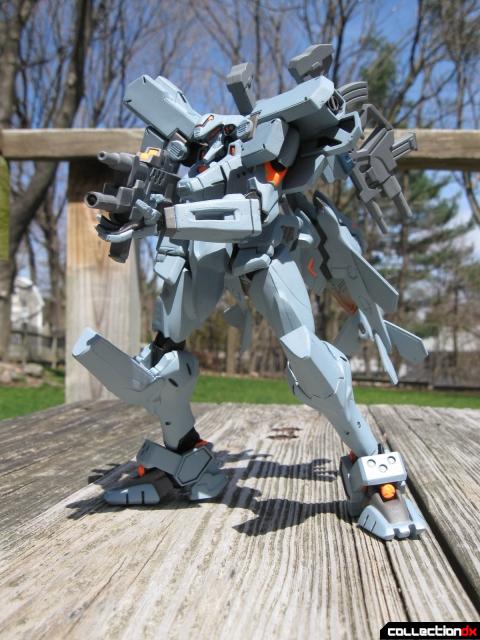 I really do love how these figures look and feel despite some of their shortcomings. 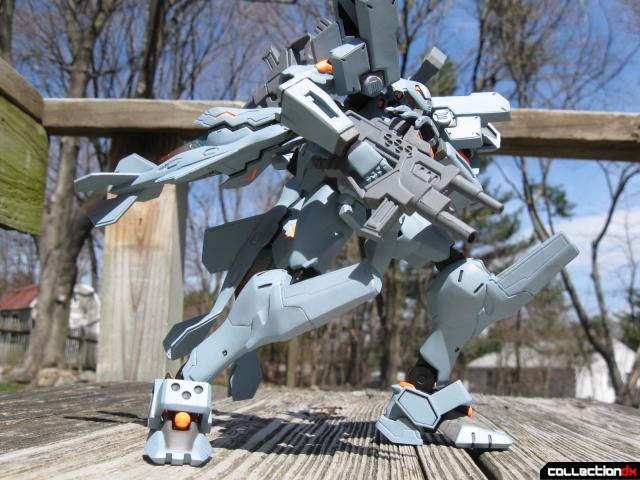 The Strike Eagle is just so sleek... 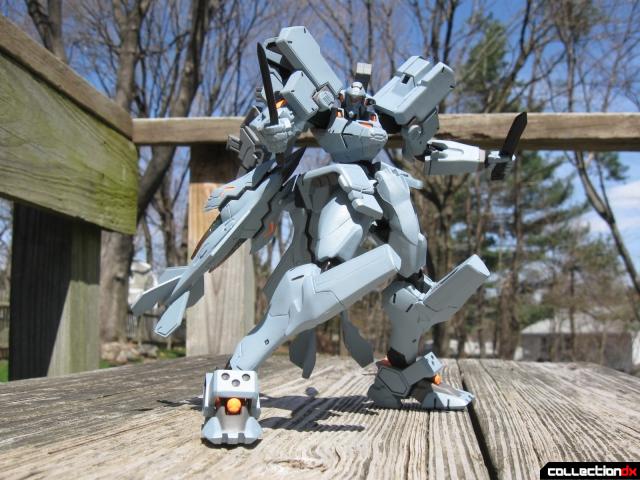 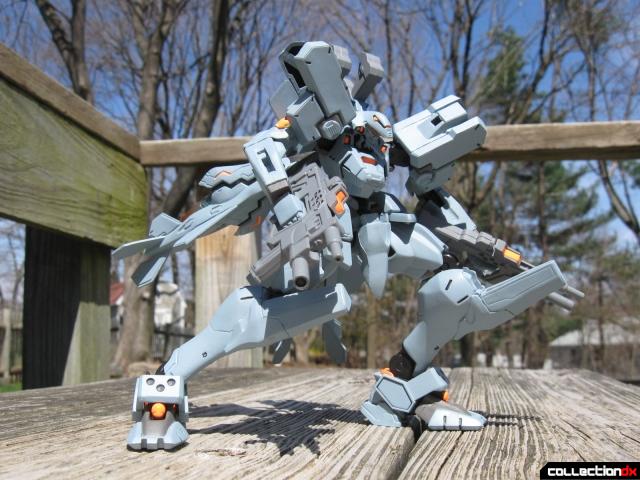 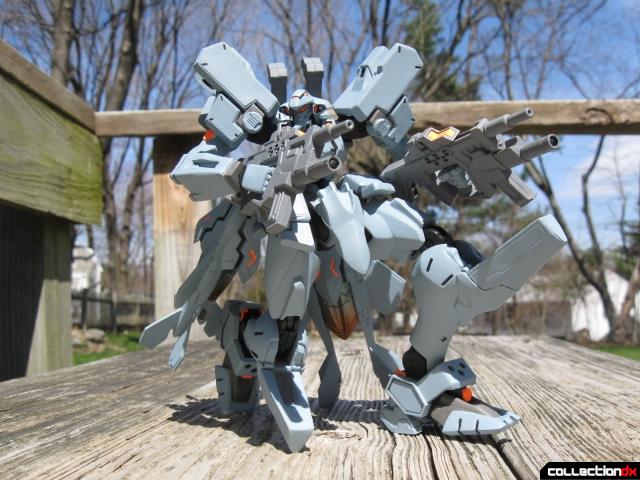 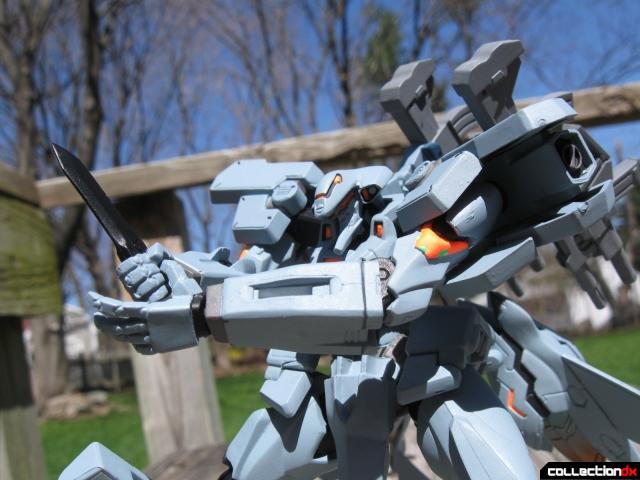 And ready for a knife day. 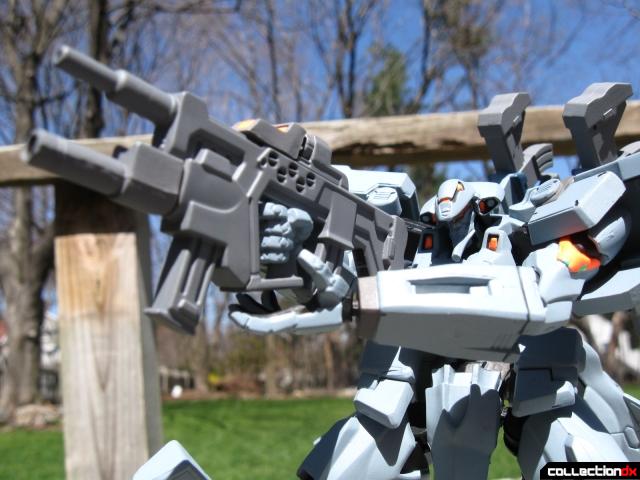 Or ready to take aim. 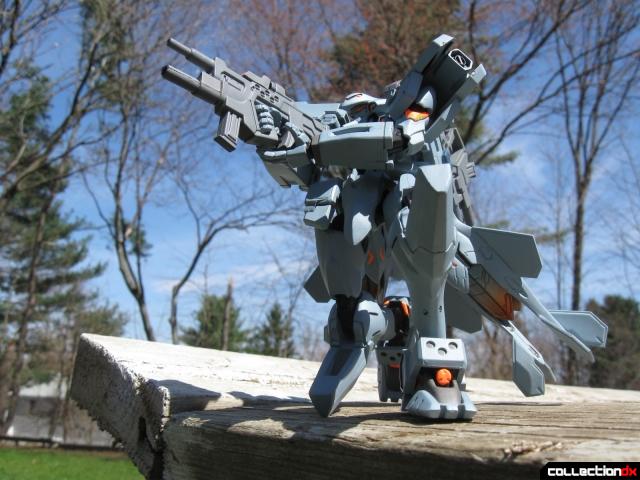 "Ara ara~ Yuuua's gotten himself into another pickle. I'll just take out the big ones to give him a chance to practice fighting the little ones." 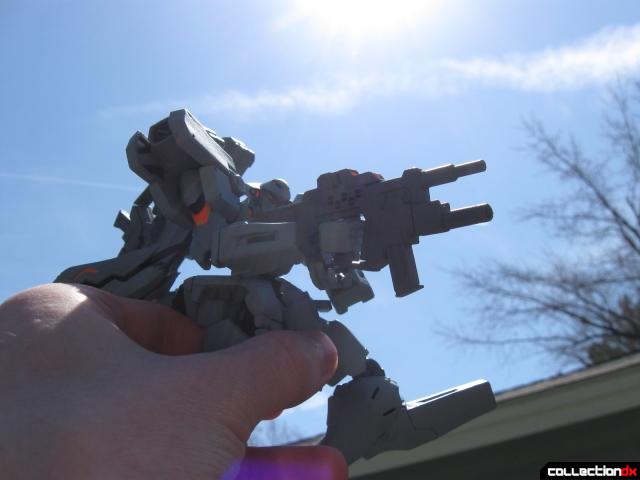 I tried to get a picture with a passing jet. but unfortunately he wouldn't cooperate even for a quick photo. Must have had a celebrity on board. 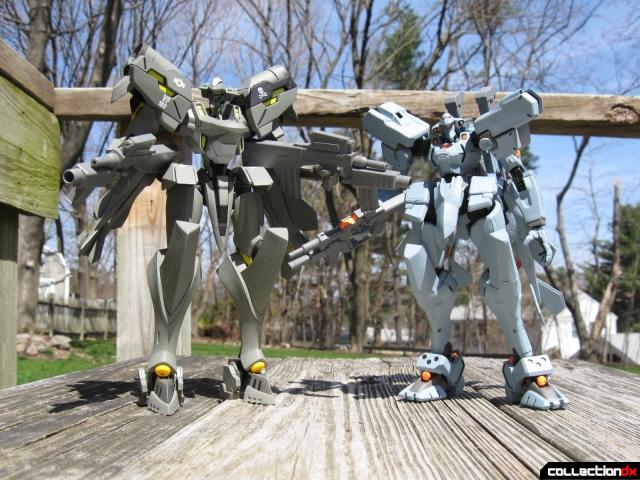 The F-14 and F-15 are airplane bros even across dimensions. 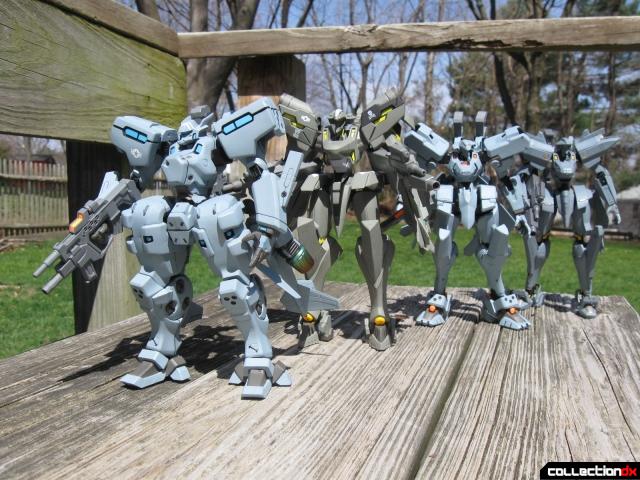 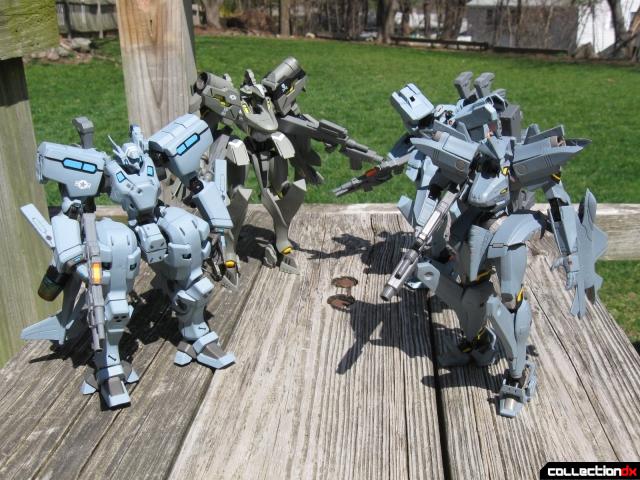 Despite sharing the same silhouette, each design has its own characteristic details that sets it apart from the rest. 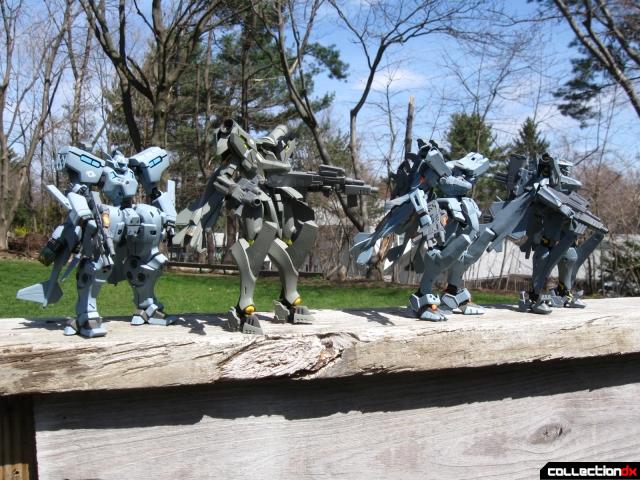 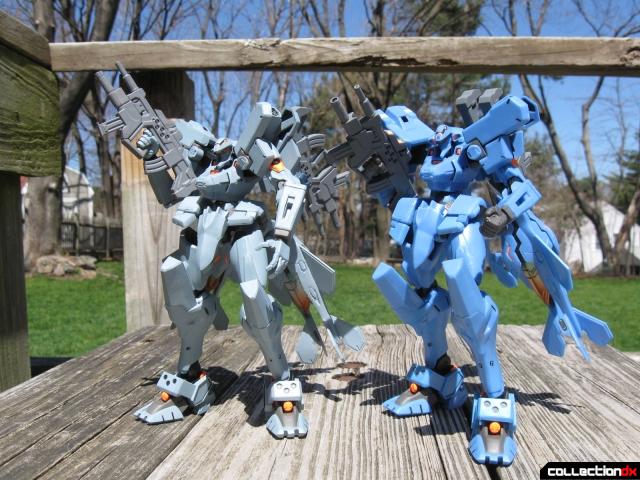 It is interesting how the figure on the left is 6500 yen MSRP while the one on the right is 4300 yen. Did the equivalent of about 16 dollars really just go into paint, packaging, in an extra pair of hands? Maybe Muv-Luv fans are just crazy people. I've been compromised so I am no longer fit to make that judgment. Regardless I still paid about the same for both figures since the aftermarket has been very kind to me lately. Despite some of my grumbling in the TMC figure review, it only takes one good photo session to get me to warm up to a toy. Just as spring signals the renewal of spirit so too is my resolve to collect expensive Japanese toys and take pictures of them outside. I think both versions of the Eagle are quite good figures overall. They are still a little more boutique than most action figures but if you are a Muv-Luv fan and can find one at a good price I'd recommend either version.