Megatron. As a Tank. It all started here.

This was the 90s, when the concept of political correctness began to creep into our daily lives, and began to ruin the things we love.

Kids couldn’t play with realistic guns anymore, each gun had to have a neon tip at first, but then guns didn’t even look like guns anymore. 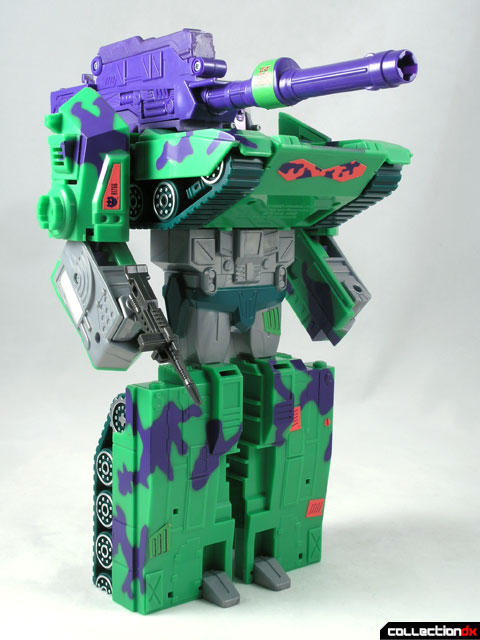 Transformers G2 was supposed to be a renaissance of sorts. Hasbro / Kenner began to re-release the G1 Transformers in new, updated paint schemes with added weapons and play value. Not only did the G2 Optimus Prime have a black trailer, but it also had an electronic voice box and it shot missiles. Most of the G1 cars and even some Decepticons were re-released. But in this era of Political Correctness, there was no way that Hasbro could re-release Megatron as a realistic looking gun. So Hasbro went back to the drawing board (apparently without Takara), and created a new version of Megatron. 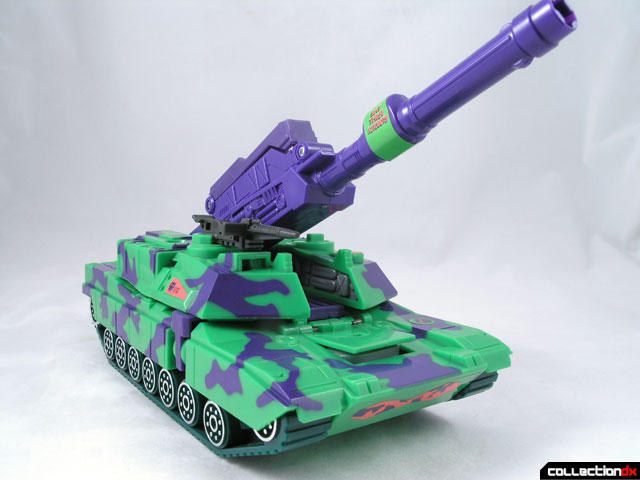 Megatron was now a tank. Now, I can buy that. It’s powerful, it still has a large cannon. A realistic looking tank that transformed would look great. But Hasbro had to go one further. They made Megatron a NEON GREEN AND PURPLE tank. With stickers all over it that said such witty phrases as “Eat This Autobots” and “Big Stick”. It is a classic example of the faux-extreme design that executives in a board room thought kids would really relate to. Hell, I’m surprised Megatron isn’t wearing sunglasses and Bermuda shorts at this point. 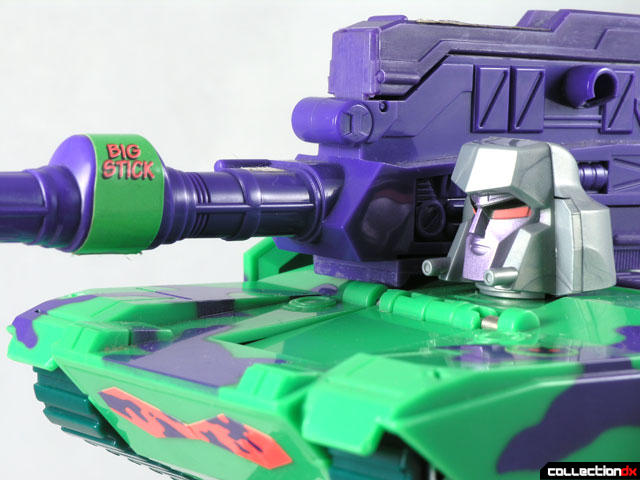 The toy itself is really mediocre. In tank mode, it looks alright if you can get past the color scheme. The treads don’t actually move; instead there are wheels on the bottom. The turret does not turn, but the barrel does go up and down. Megatron’s tiny gun and a missile assembly (not shown) fit on the top. 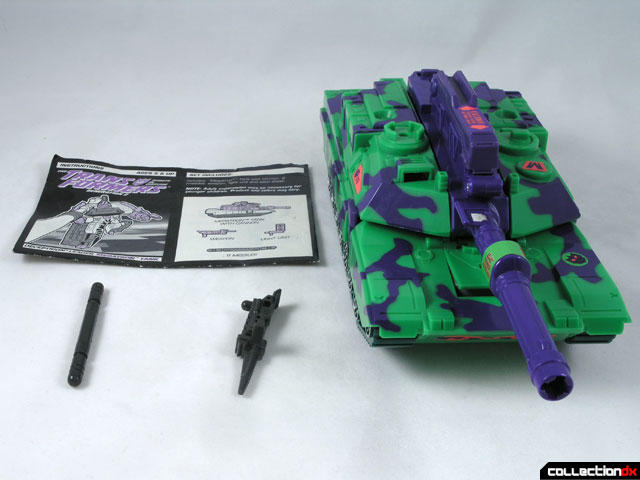 Transformation is easy enough; straightforward and very American. It reminds me of those cheapo American Transformers you could find at Osco Drug in the 80s. In robot mode, Megatron is a brick. The legs don’t move, the head doesn’t turn - you basically just get a little movement in the arms.

Megatron’s one redeeming value is in his gimmicks. Most notable is the giant cannon which actually fires missiles a good distance. You lift the cover of the cannon, insert the missile, pull back to cock the cannon and the press a button to fire. Megatron makes electronic firing noises when launched. The missile goes surprisingly far. Megatron also includes a small gun that can fit in either hand. When you have a giant purple cannon on your shoulder, do you really need this pea-shooter?

Megatron also features 5 electronic sounds that are actived by pushing down on the plate where his head is, in either tank or robot mode.

Unless you are a die-hard Transformer fan, skip this one. 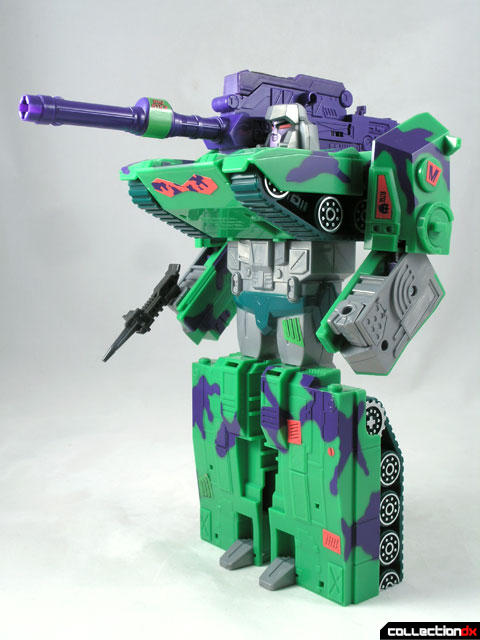 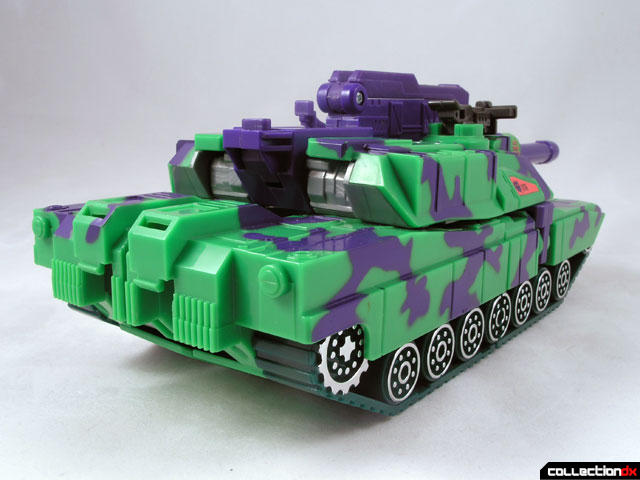 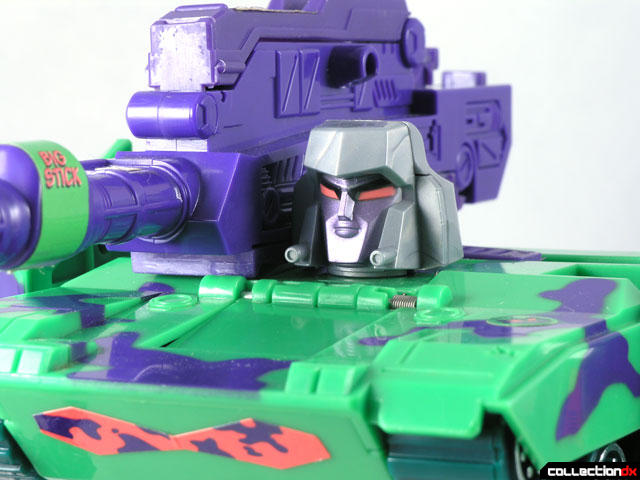 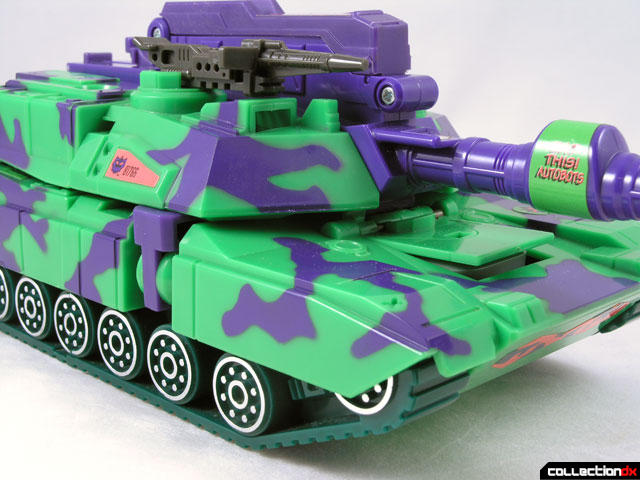 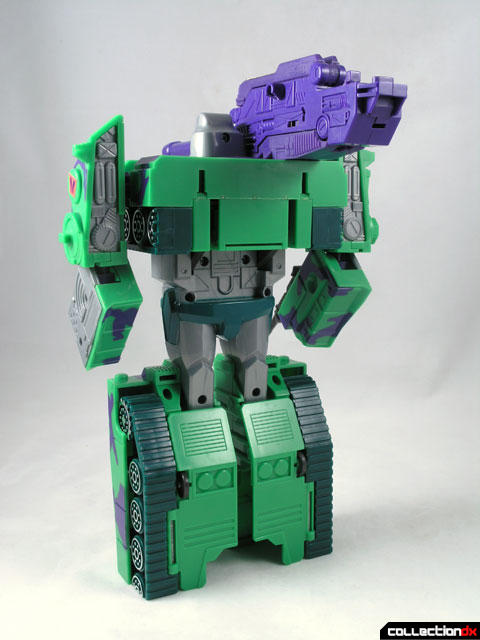