Rokuron Q9 (ロクロンQ9) is from the second series of Jumbo Machinder villains and is based on the character that appeared in episode 37 of Mazinger Z. In the show, he had 5 heads. 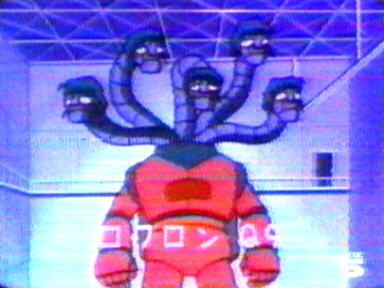 But at some point in their fight, Mazinger Z destroyed two of the heads and Popy chose to produce the toy with only 3 heads and 2 damaged stumps depicting where the destroyed heads were. 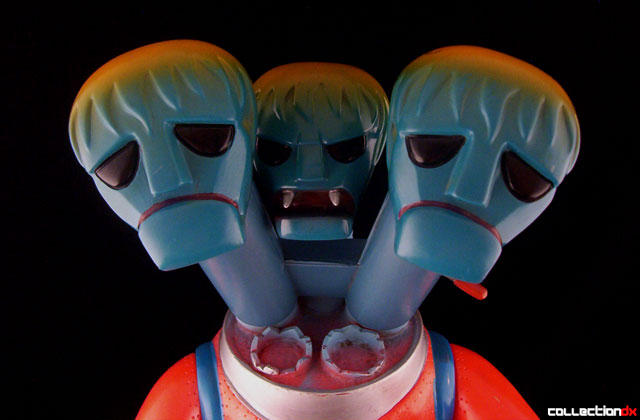 It certainly makes for an interesting looking toy, but I can't help wonder what a jumbo with five heads would have looked like! As if having three heads isn't enough to make a toy cool, the two heads on the side can be launched using a simple spring mechanism. Each side neck has a metal rod in it with a spring underneath. The rod curves out of the neck through a vertical slit in the side. 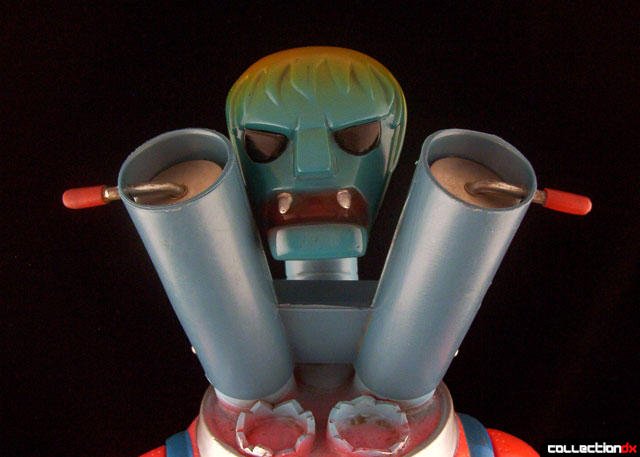 To load each head, you simply push the rod down and twist it into a horizontal slit in the neck, locking it into place. To fire, just push the rod back into the vertical slit and release. The spring will do the rest.

Perhaps a bit surprisingly, most specimens of this toy that can be accounted for still have both firing heads, with the notable exception of the one at the Bandai Museum in Japan, which has neither. One thing I never knew about Rokuron Q9 was that not all three necks are the same. The two that launch the heads are made of ployethelyne while the third is molded in soft vinyl. I would much have preferred all three to be the same for aesthetic reasons, but I suppose Popy must've reasoned that poly would be more durable for the launching ones. The poly necks are screwed into a soft vinyl base. When I bought this toy, it was recommended not to store the heads in the armed position, for fear that the constant pressure of the springs might eventually cause damage. Since the toy looks so much better with both heads on, I head briefly considered simply undoing the screws, lifting off the necks and removing the springs. Ultimately, I thought better of it and decided to simply display it with the heads resting at his feet. I just couldn't justify taking any chances with my most prized Machinder. 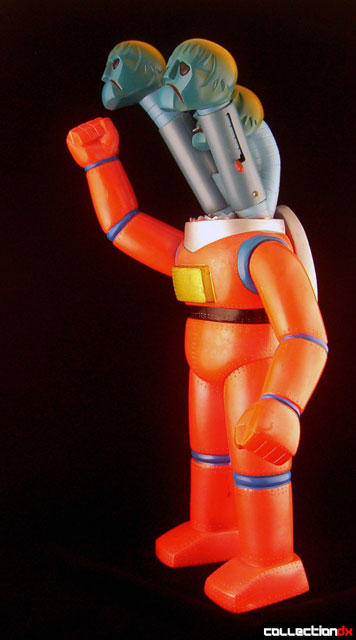 With his heads loaded, Rokuron Q9 stands 20.5" tall. It is articulated at the hips, shoulders and waist. Since the two heads are removable, you can also turn them to face any direction you choose. The last head is molded into place. Like all the other Machinder villains, his copyright information is etched into the bottoms of his feet, along with his name.

Rokuron has a few noteworthy aspects that aren't really important, but I think add to his appeal overall. Such as the fact that he is the only Mazinger villain to have teeth and hair. And his heads look both angry and despairing. It all adds up to a really bleak appearance. He looks less like a robot than a person who's been cursed and turned into a monster. The Jumbo Machinder villains were broken up into 2 different series'. The first series toys each featured their own individual boxes, but the second all shared the same box image, with their names written on the side so that the buyer knew what they were getting. Not only is the second series box very appealing to the eye, it also features the images of the vilains prototypes instead of the real toys. Note that the middle head of Rokuron Q9 is higher up on the prototype than the outside heads, the exact opposite of how the toy was actually produced. 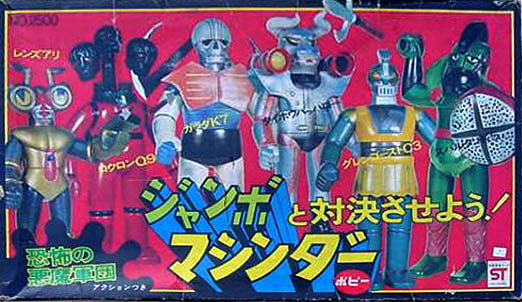 Everyone knows that Garada K7 is the most sought after Jumbo Machinder, but depending on who you ask, Rokuron Q9 may come in second. It is not as rare as Lenzari or as popular as Dabulas M2, but it combines rarity and popularity probably better than either of those. I believe at last count, 8 specimens were known to exist, 2 in the box. This is not an easy toy to get and if the opportunity presents itself, you really need to decide how much you are willing to sacrifice for this hobby. 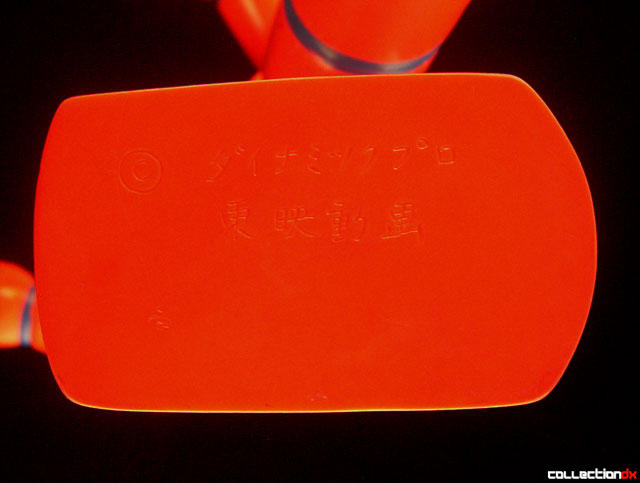 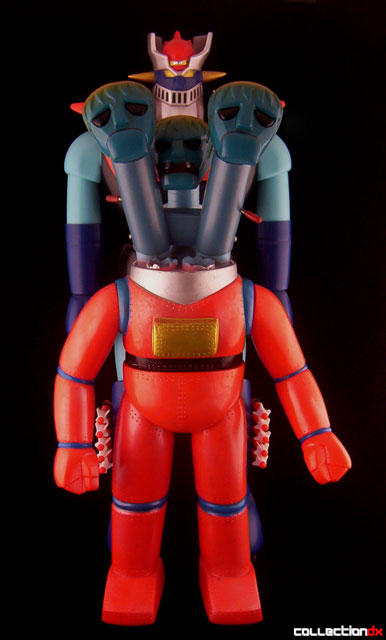 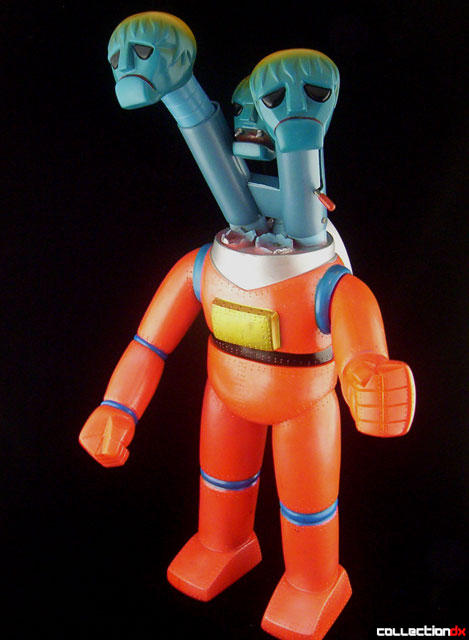 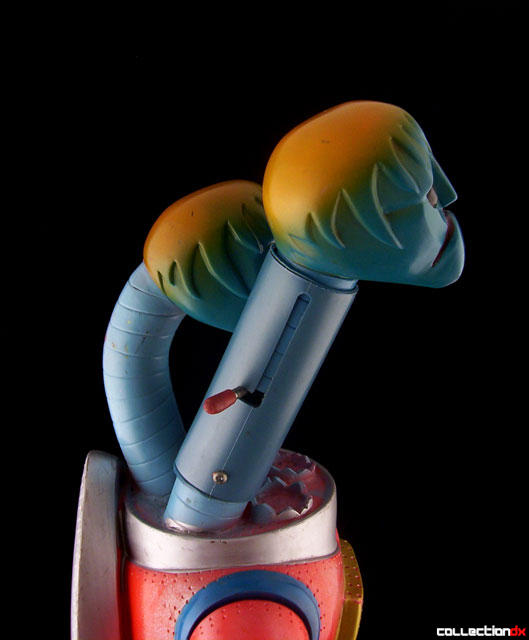 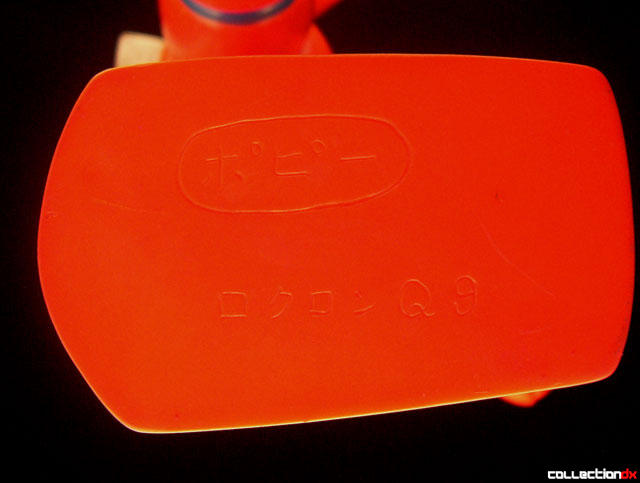 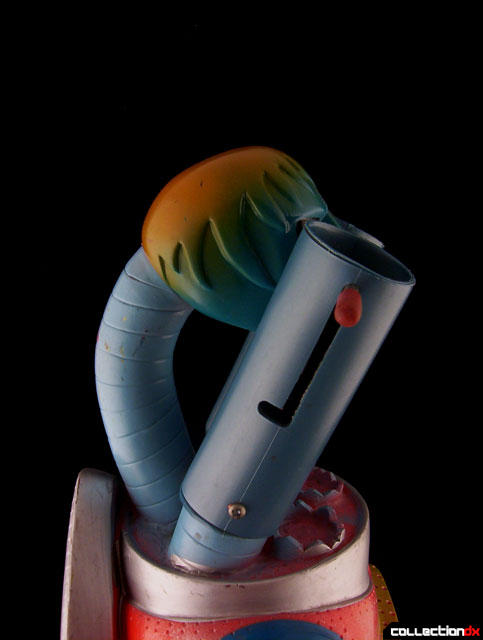 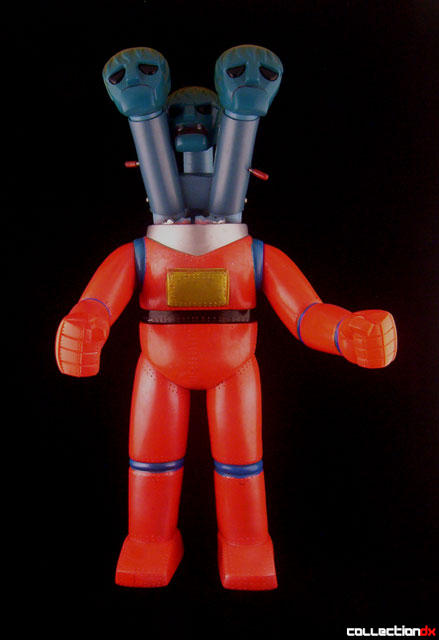 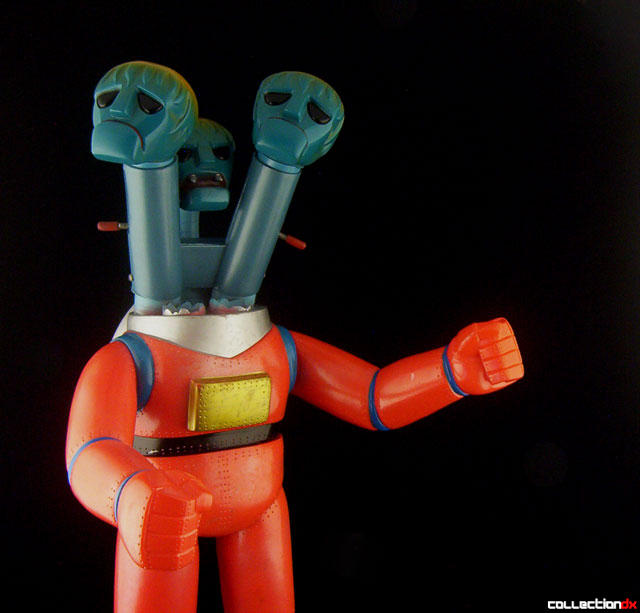 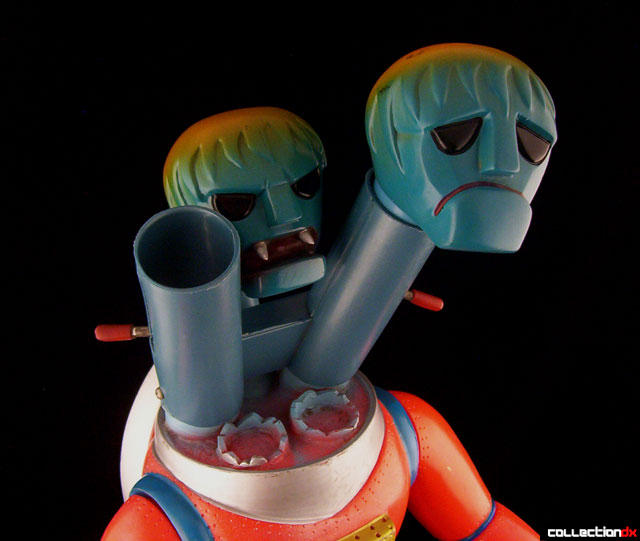 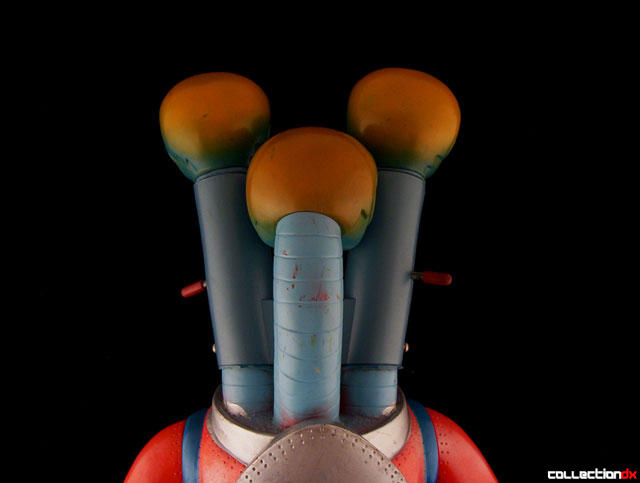 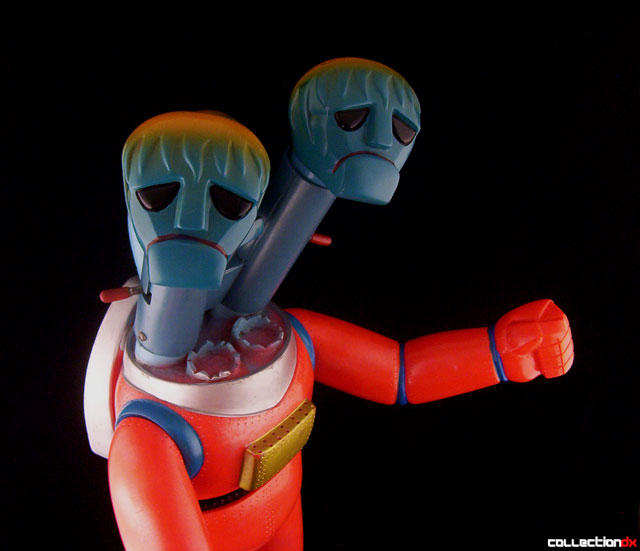 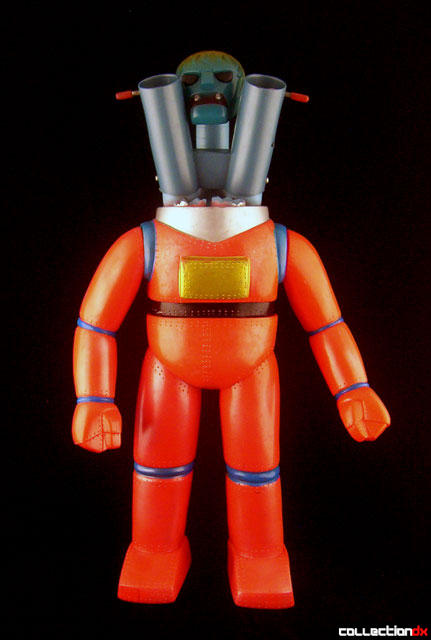 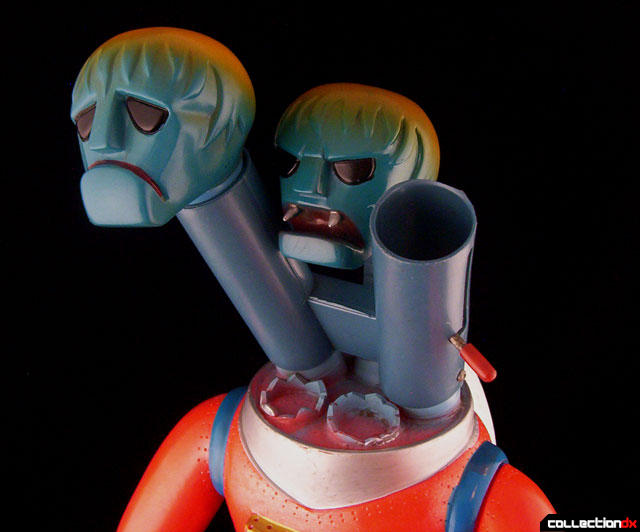 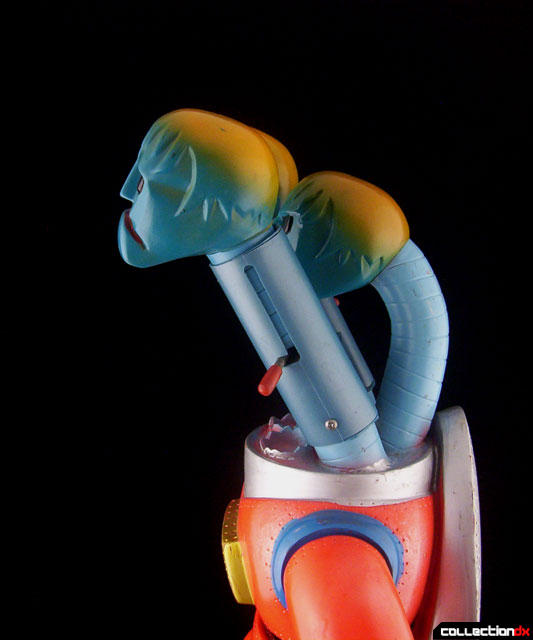 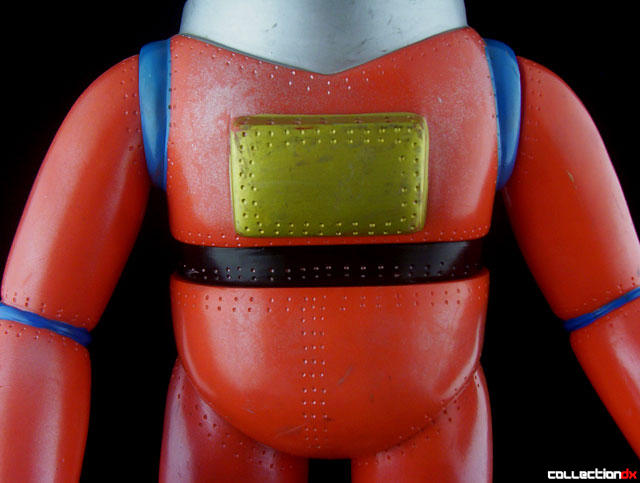 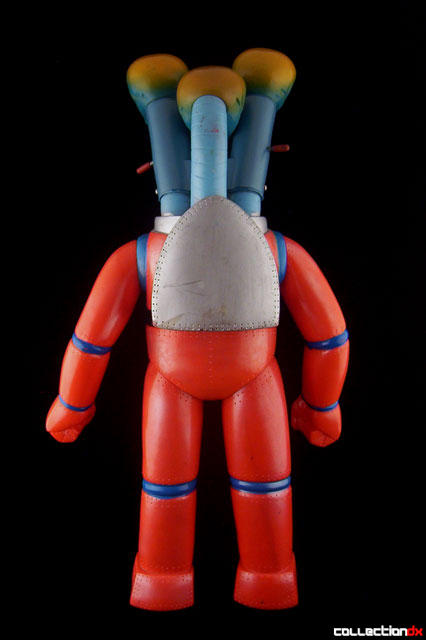 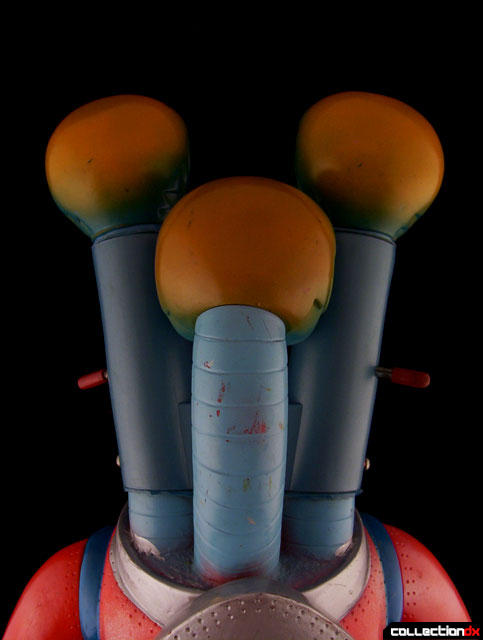 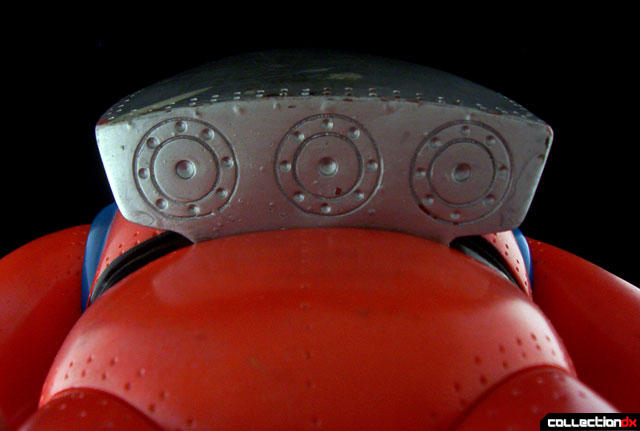 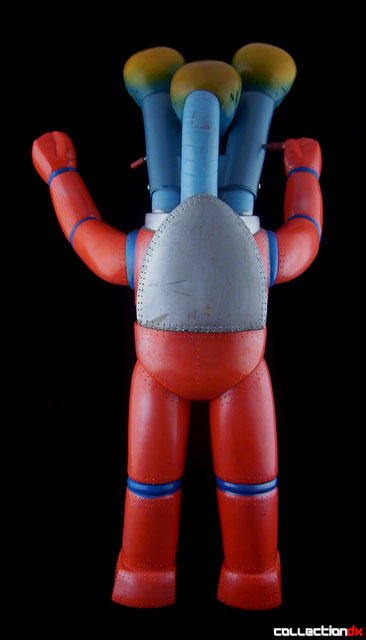 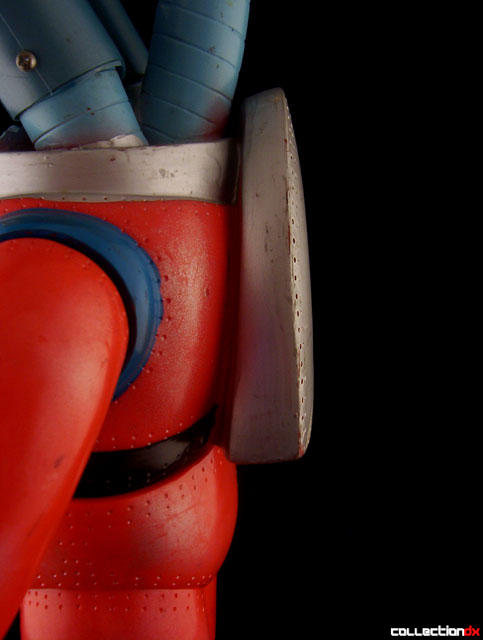