Repaints and remolds have been a staple of the Transformers for decades now, but the idea doesn't necessarily mean a lazy redo. While some Combiner Wars toys have gone for the no frills "new head and new colors" model, others do far more. This especially evident with Combiner Wars Streetwise. 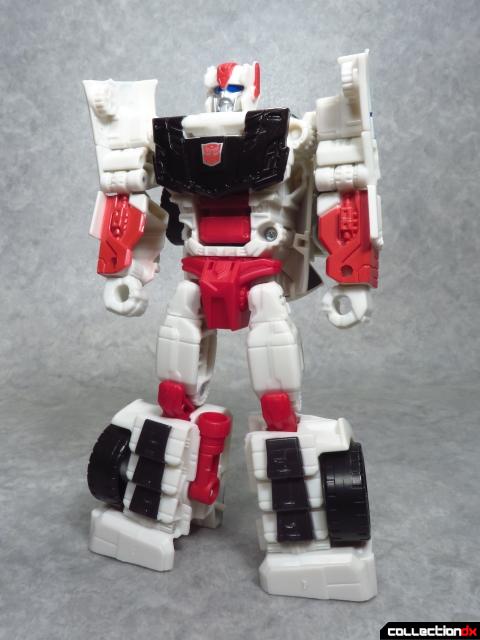 While it's easy to peg Streetwise as a Dead End redeco with a new head, there is a lot more going on if you scratch the surface. Actually, the surface is where you should start, because this Protectobot only shares a few pieces with his Stunticon counterpart. If you look closely it becomes apparent that everything else has been reshaped or redesigned, which helps establish Streetwise as his own toy. 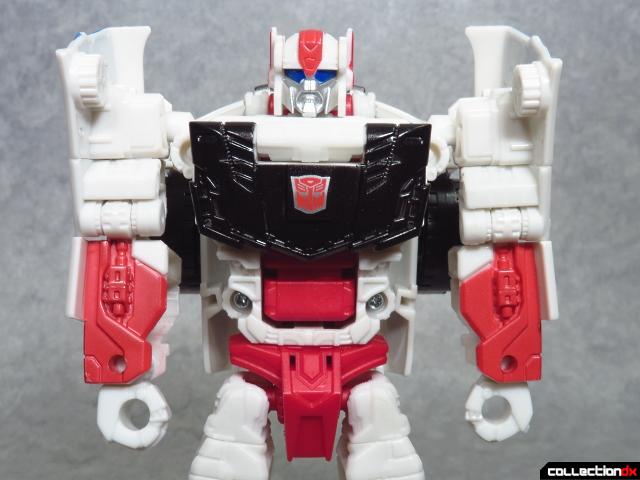 Take his chest plate, for example. It is now a much smoother sculpt that evokes the black windshield the original G1 figure had on its torso, while also covering up his combiner connector. 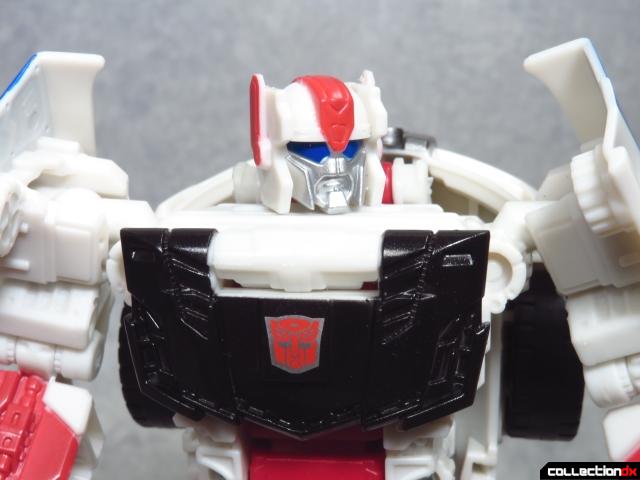 The new head is great too, with a faithful take on the noseless face mask design from the cartoon. 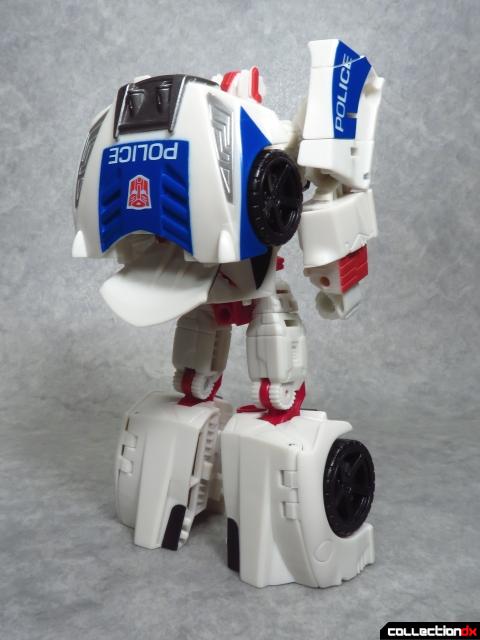 While Streetwise obviously has the same engineering and general layout as Dead End, he transforms into a different car entirely. This means that every external piece of the figure, like the arms, legs, and backpack, are new to the Protectobot. 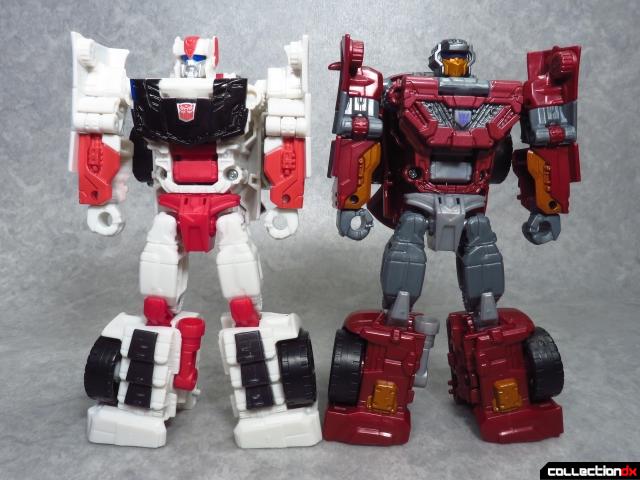 Putting the two side-by-side makes it easier to see the big changes. There are also subtle differences like the mechanical detailing on their bodies, shins, and forearms that may go unnoticed. The only thing I can tell for certain is the same in both figures is their waists, thighs, and some transformation mechanisms. Also, Streetwise feels like a much tighter toy, with tolerances adjusted for the new parts and everything fitting together quite nicely. There was one quality control hiccup, but I'll explain that in a bit. 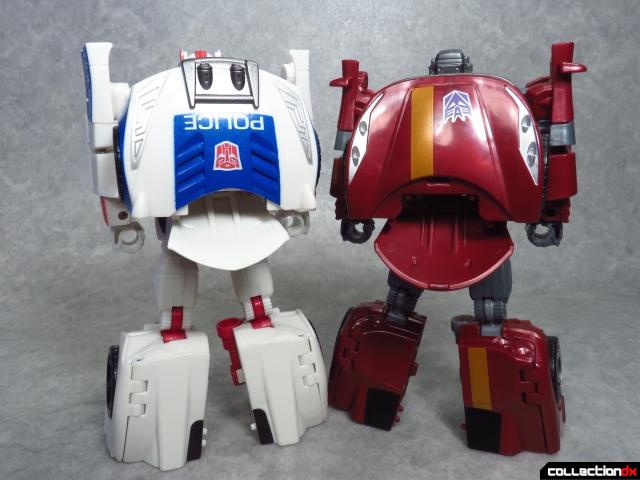 Back when Brake-Neck was revealed, I saw some fans wishing he used some of the newly tooled parts from Streetwise to in order to better differentiate him from Dead End. Now despite how similar they may look from the back, their vehicle modes are very different, so parts from one would not be compatible with the other. 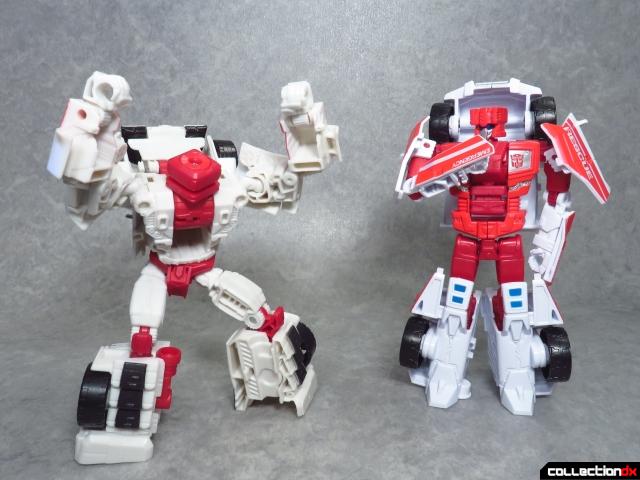 "Help me, doc! My transformation joint is stuck and I can't bring my head out!"

"Hmmm... this looks quite serious."

I noticed my Streetwise had some excess plastic along the big red hinge his car mode front moves around on, and would get stuck when I'd try converting him back from limb mode. 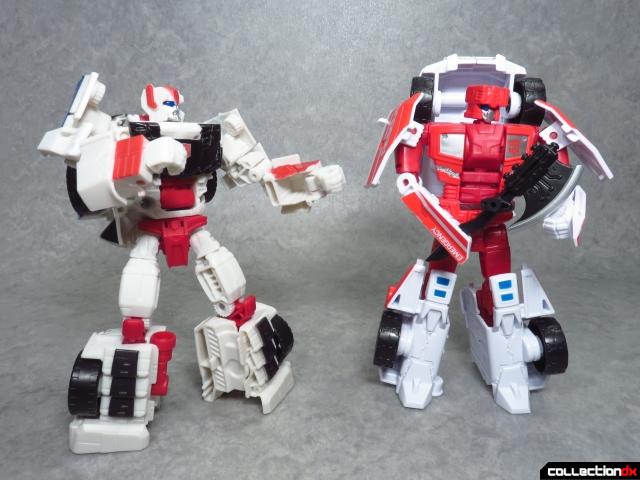 "Something this severe may require the use of the medical ax."

It took me less than five minutes to fix this, but it's still a little disappointing that even something based on the Dead End mold still has a few issues. 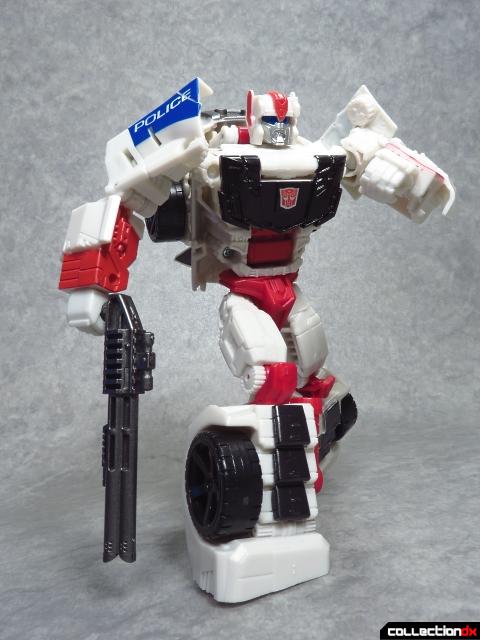 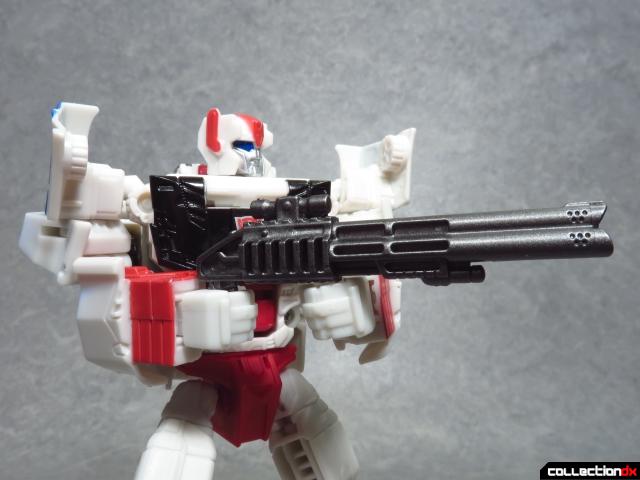 This baby looks like it packs a mean punch! Also, there's a scope, for all those times Streetwise is hunting Decepticons in a state where rifles are restricted. 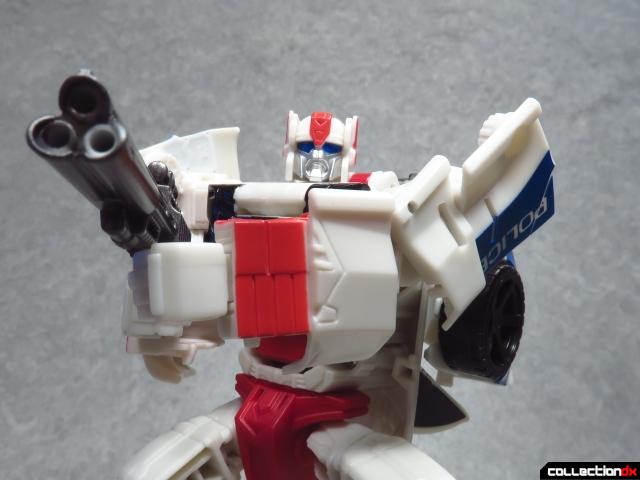 Unfortunately, the shotgun on my figure is missing a dab of paint on one of the barrels. Although, it is interesting to see that the weapon is cast in white plastic and then painted silver... 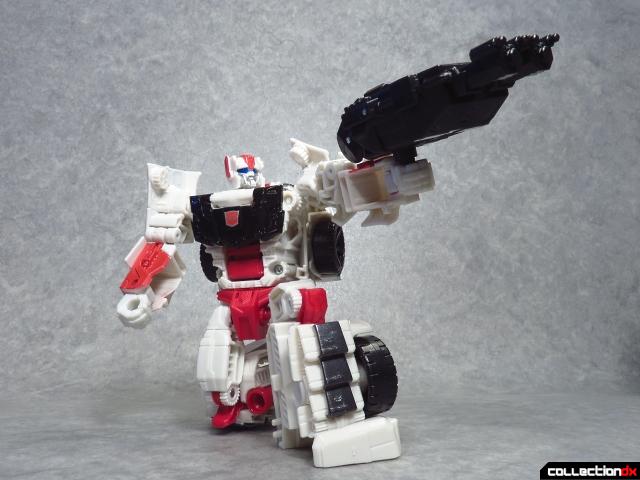 Streetwise has the same combiner hand/foot/gun as Dead End and Brake-Neck: a sort of dual triple blaster but in black this time. It fits better in his hands than the accessory did with either Stunticon, but there is still some room for improvement. 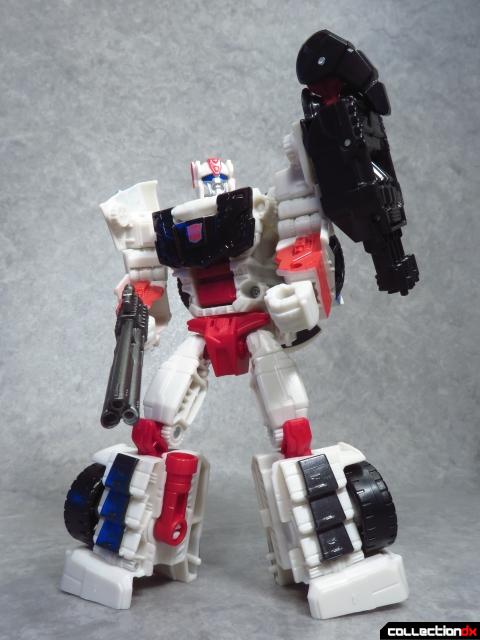 One thing I have noticed with Combiner Wars figures is, if there is some looseness between the hand/foot/gun and the toy itself, it's generally the former that is a bit too small, so focus your homemade tightening efforts on the connecting peg. So far this seems to be a problem with the specific weapon from the Dead End mold, as I tried other accessories with Streetwise and they were much tighter. 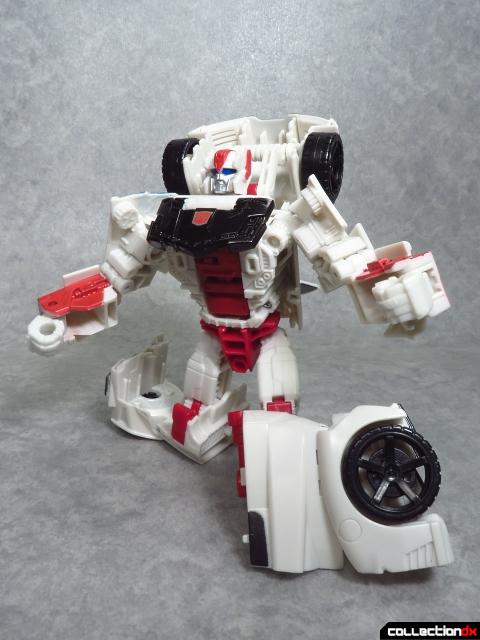 Streetwise transforms into vehicle or limb mode the same way as Dead End, but the conversion process is much smoother and everything comes together nice and tightly. 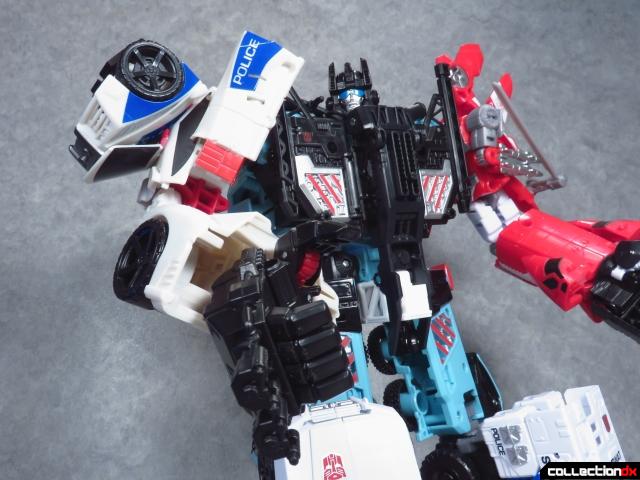 As an arm, Streetwise functions identically to Dead End / Brake-Neck, but with some improvements. The Protectobot's own arms tab neatly into his body at an angle, unlike on the Stunticons where this feature was a bit looser. 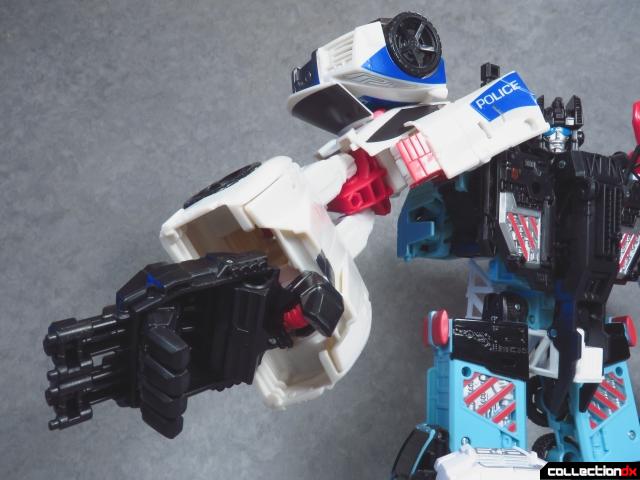 While he was usually a leg in the cartoon, Streetwise nevertheless was depicted as Defensor's arm in both versions of the combiner's box art and in illustrations by Studio OX. 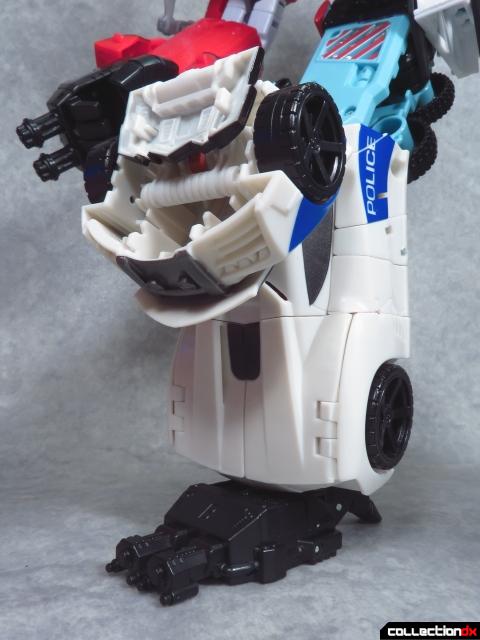 The Autobot car makes for a pretty straightforward leg, which can move about freely without bumping into parts of Hot Spot. 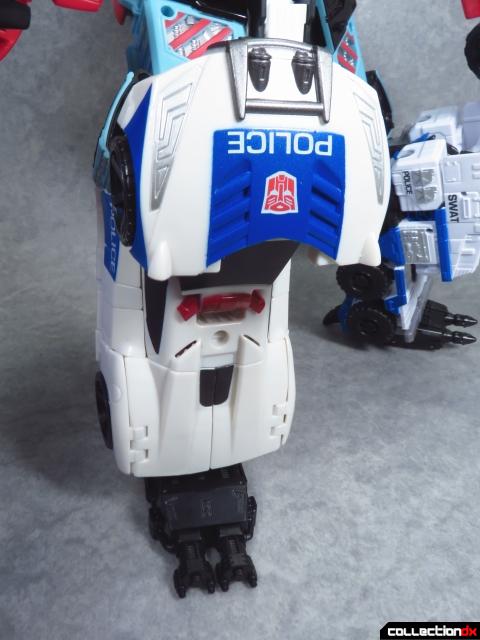 You can also leave the car front and windshield flipped up for a more G1-style configuration. 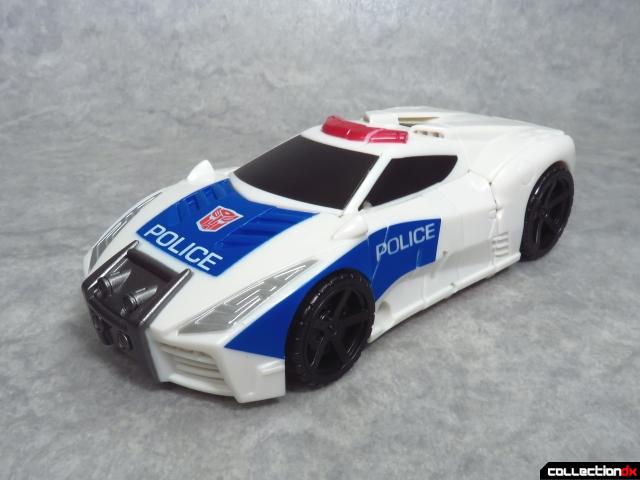 In car mode, Streetwise is a R35 Nissan GTR modified for police work, with a light bar and reinforced grille. The uptick in quality control means he can roll around with the best of toy cars and doesn't suffer from something poking out too far underneath. 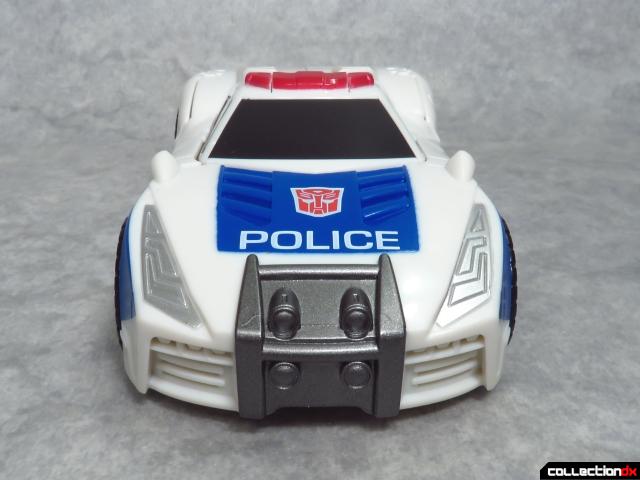 His color scheme isn't the most exciting, but is still a decent (if perfunctory) police car. Also, note that his main plastic color is more of an off white, which emulates the way the original toy looked. 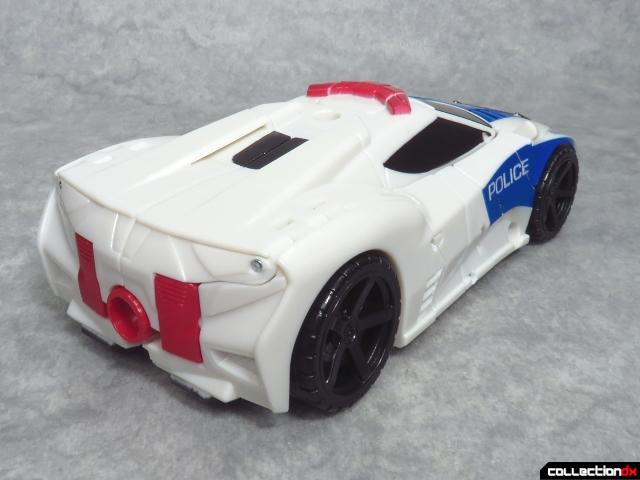 The tiny black rear windshield may make it hard to track perps, though. The leftover red parts from Streetwise's robot mode knees are a bit tacky, but can be passed off as a pair of taillights. 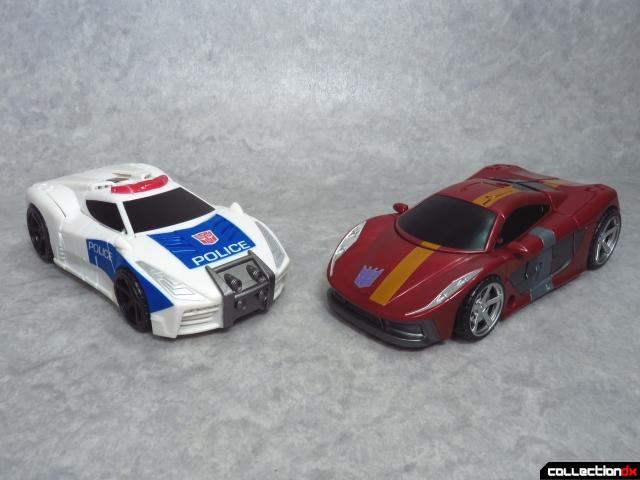 When placed next to Dead End, the differences between their car modes are readily apparent. 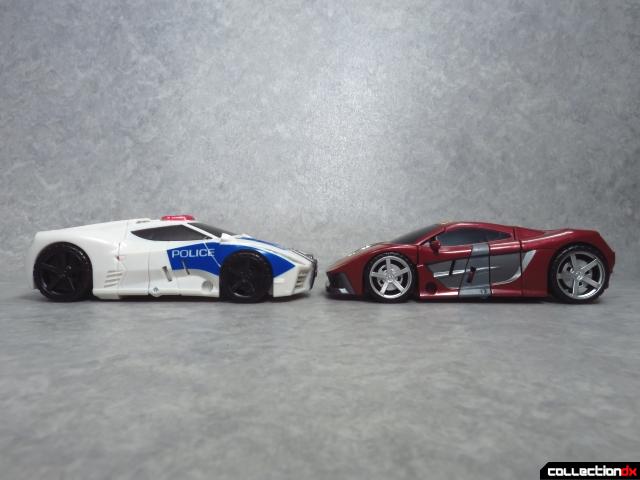 And again, while they are using the same general design and layout, well over half of Streetwise is new. As an aside, I'm still a bit bummed out when Hasbro skimps out on coloring in the rims of a toy, as I think it lessens the look of the car mode. 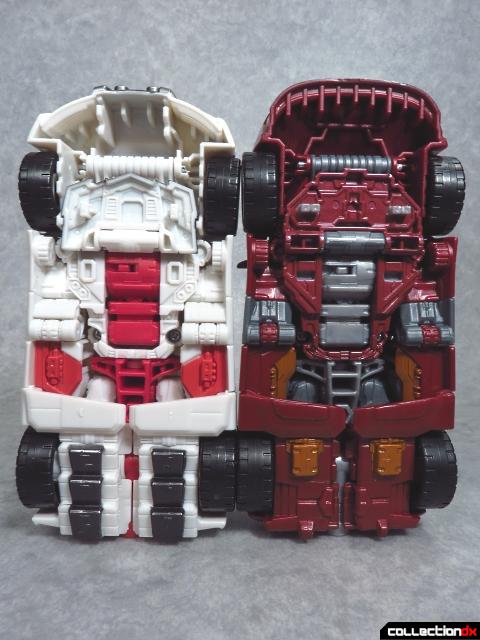 Even areas you aren't normally paying attention to, like the underside of the car, feature heavy remolding. 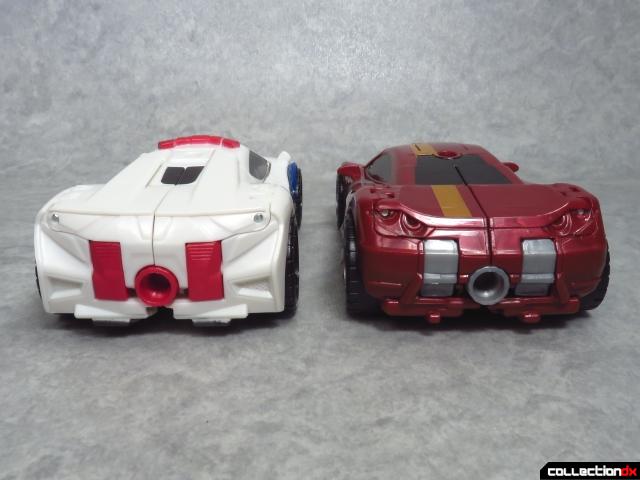 All the remolding probably explains why Streetwise fits together so much better in car mode than either Dead End or Brake-Neck. 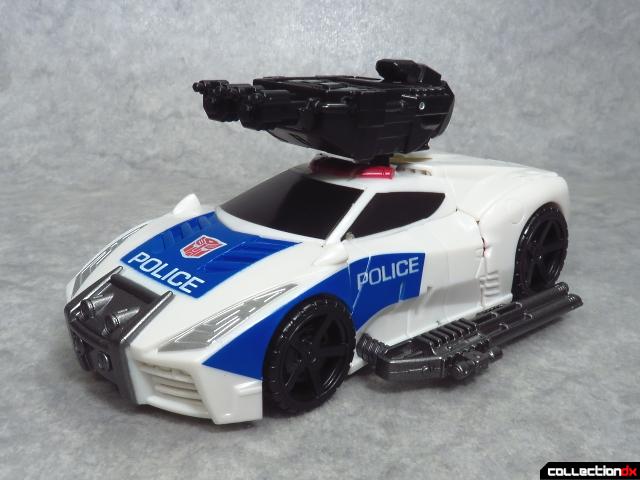 And you can still attach all of Streetwise's weapons in car mode. Sadly, the shotgun isn't quite as fly as Dead End's sweet exhaust pipe, but this is all about function over form. 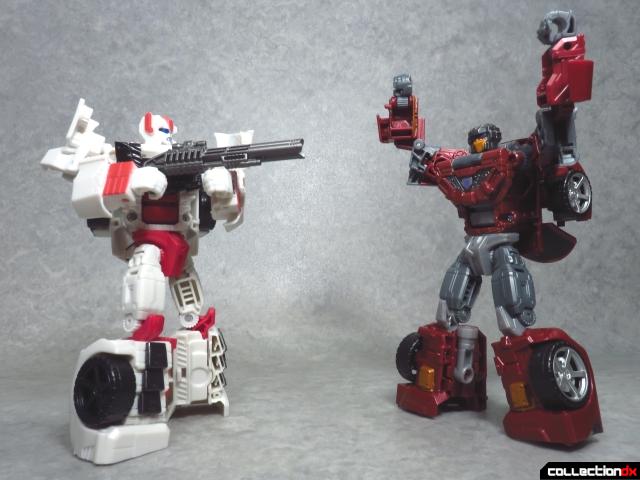 "You're under arrest for crimes against the arts!"

"What is it with you Autobots and your hatred of fatalist beat poetry?"

Streetwise is another Combiner Wars figure that ended up being a pleasant surprise. The issues I had with Dead End (and to a lesser extent, Brake-Neck) made me a bit leery about getting a third toy based on that mold, but it turns out the Protectobot is a whole new ballgame. I'm happy to see the line continuing to improve on what is already a solid baseline.