Transformers The Last Knight's first wave of deluxe figures has been more of a mixed bag to me than I initially thought. To me, Barricade is really good, Bumblebee is just pretty good if a little bland, and Slash could be described as only ok at best, but the final wave 1 deluxe, and it's second Decepticon, Berserker, whom I thought was the worst looking from the first images I saw, turned out to be much better than I expected.

Berserker's robot mode has a lot of personality. He features a stalky, animalistic stature that completely sells a motif of unrelenting fury. Either that, or he looks very similar to the designs of a Decepticon Dread from Transformers Dark of the Moon. The head sculpt is probably the best part, as it basically looks like the Predator as a robot, and the metallic silver paint just makes it stand out even more. That can't be said for the deco seen on Berserker's arms and body, as the red and orange looks kind of strange when compared to the more muted black and gray seen on basically every other part of the figure, while the imperfect red X definitely isn't helping. Articulation is to be expected, aside from a waist swivel, which has been replaced by a deep diaphragm joint, while Berserker's semi neatly hidden backpack panels can move freely to go in a more natural looking position when the ab crunch is used. One minor grievance I've had with my copy of Berserker is not that the arm kibble likes to fall off (mine stays in pretty well) but, his head does instead. 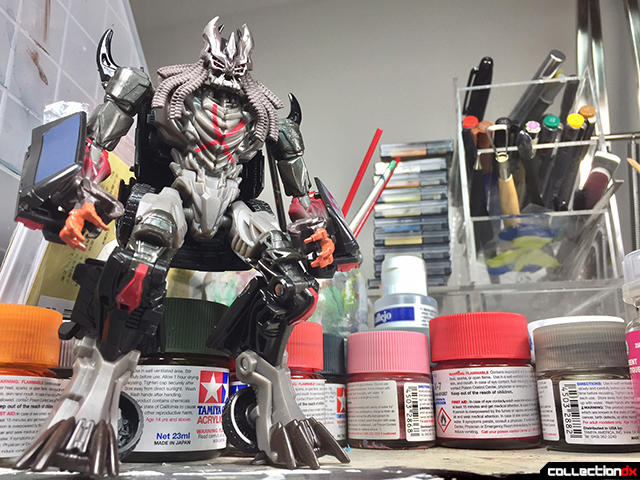 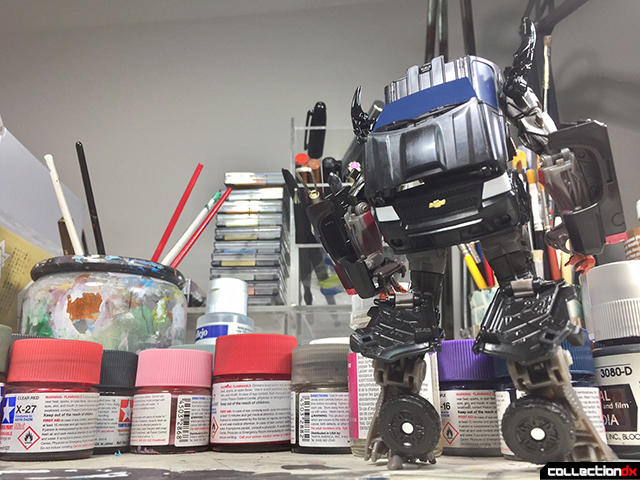 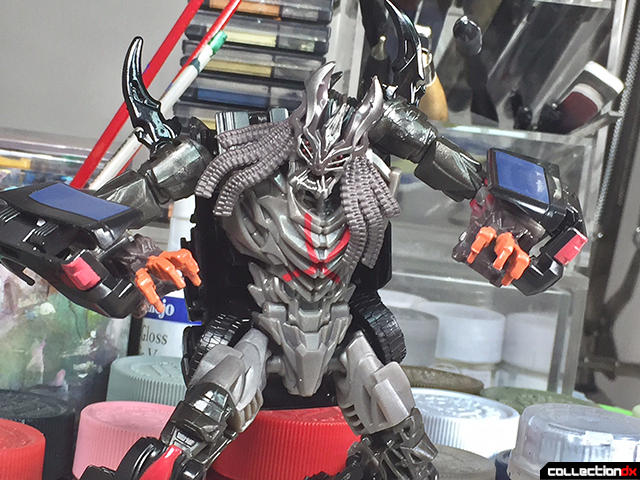 Berserker's articulation can be used to great effect with his weapons, dual spiked clubs. These clubs make the figure look really vicious and awesome when held in his hands, but when not in use, they can store on his back so insecurely that you might as well not be able to do it in the first place. 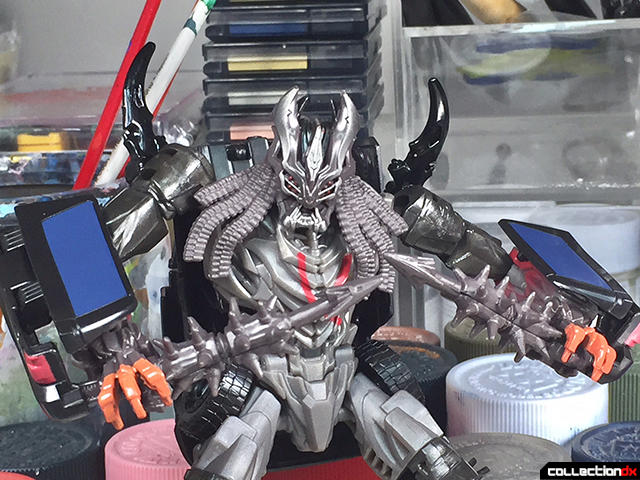 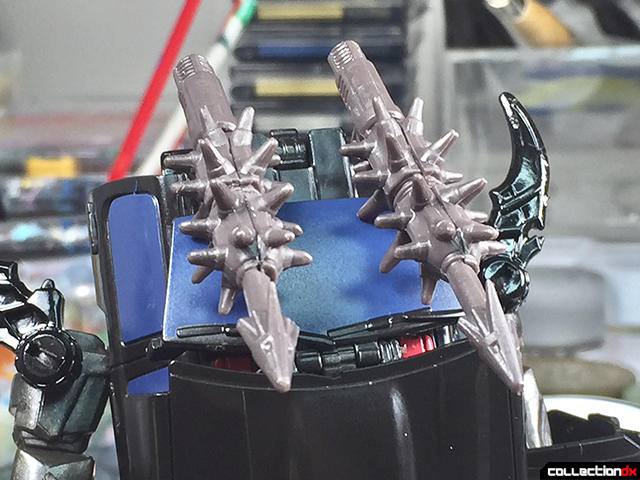 Height is actually not a problem for Berserker, as he stands just taller than fellow wave 1 Decepticon Barricade. 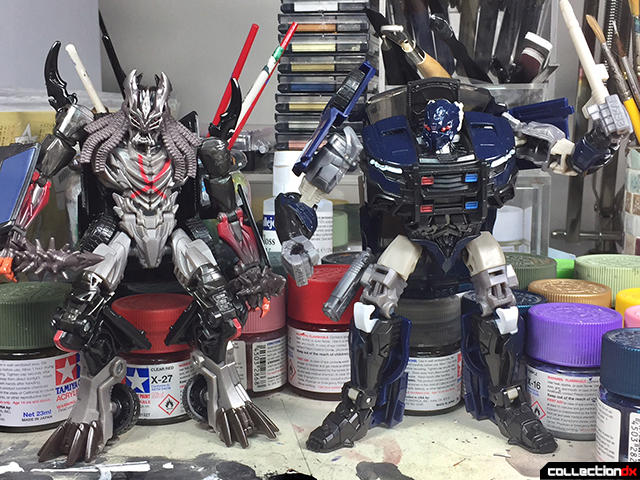 Berserker's Transformation takes a lot of getting used to, but if you take your time it's honestly more fun than you'd think. That doesn't save the fact that he's basically a shellformer, and many panels are really hard to align properly, but the Transformation is definitely not terrible.

Berserker's vehicle mode is some sort of Chevrolet generic government van, that is really well painted. All the lights, the Chevy logo, and the windows are all fully painted which comes to me as a surprise, considering many modern Transformers forget such details. That being said, a plain black government van is pretty boring. The mode itself holds together pretty well, but due to the Transformation, it's panels can be a little too easy to misalign. One really nice touch from this mode, is the weapon storage, as both of Berserkers spiked clubs can fit neatly underneath the vehicle mode. 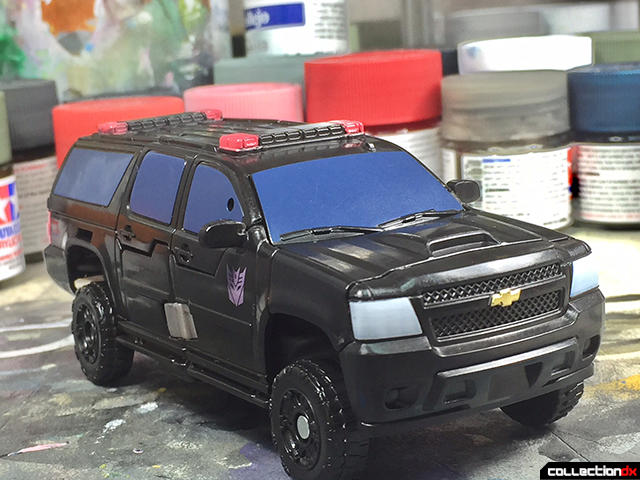 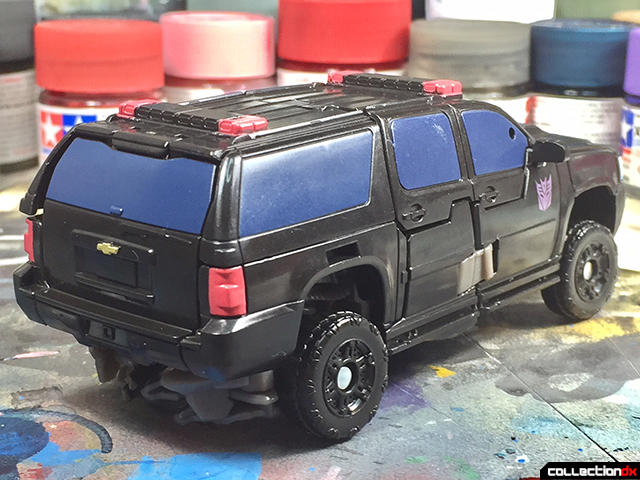 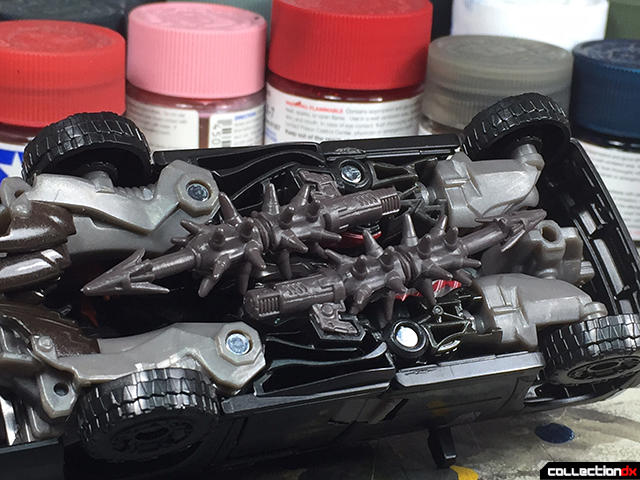 Overall I'm more pleased with Transformers The Last Knight Berserker than I expected, but I can't say he's anything too special. The Robot mode looks really cool and savage despite some questionable color choices, and the alt mode is well detailed but uninteresting, and the Transformation is too messy to be called good but not offensive enough to be terrible. Taking this into account, Decepticon Berserker is a middling release that perfectly encapsulates what is so hit or miss about the first wave of Deluxes from Transformers The Last Knight.