The Movieverse incarnation of Drift never really interested me that much in the films themselves, but I thought the Age of Extinction Deluxe Class Drift figure was pretty good, so out if curiosity, I decided to see how his new “Premier Edition” incarnation was by comparison.

In vehicle mode, Drift is a pretty cool looking black Mercedes Benz with a red trim around the bottom. It’s just a good car mode that would be a great one if all the panels needed to form it could line up as well as on Age of Extinction Drift. I think this is kind of a shame considering the vehicle mode would look awesome if it could actually fold together consistently, but in my experience, none of the car parts ever wants to line up perfectly, leading to a vehicle mode that looks overall unconvincing. One aspect about this mode, other than it’s design that I do like, is that like the AOE version, both swords and knives can be stored. 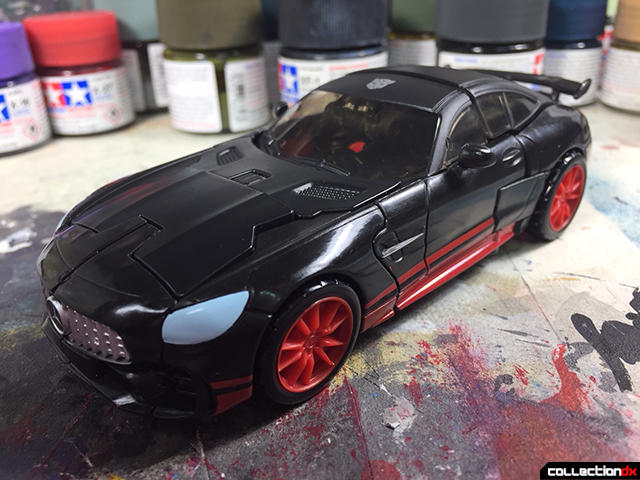 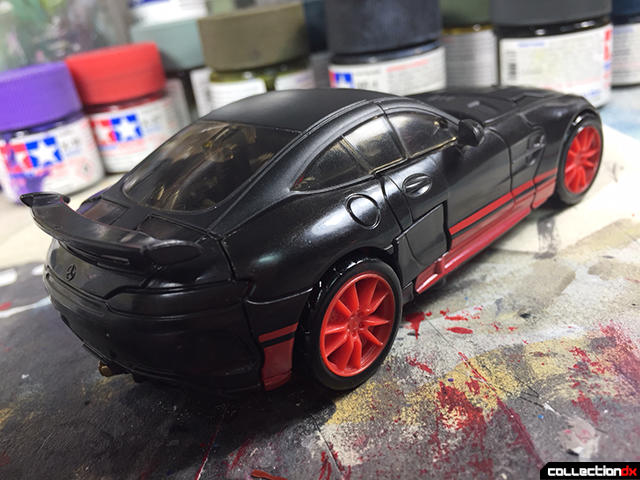 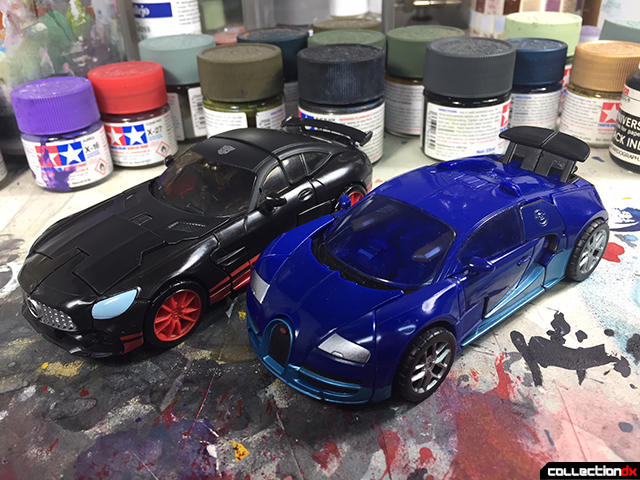 Drift is a pretty blatant shell former, but not in the way that makes the transformation annoying, as it kind of just makes it a little boring. After the doors fold up to reveal the arms and the front folds up to reveal the legs, all that’s left to do, is fold up the backpack which is made by the entire rest of the alt mode. It compresses surprisingly well, but that basically means that Drift’s robot mode is made up of practically none of his alt mode.

That being said, I really like the robot mode itself. The red and black color scheme carries across his samurai aesthetic a little better than the first version’s primarily blue one, and Last Knight Drift actually features less cumbersome vehicle mode kibble, which is really nice. In terms of articulation, Drift has exactly the same as his predecessor, because many of the robot parts here are actually recycled from that figure. I wouldn’t go so far as to call The Last Knight Drift a simple retool, but rather, it just reuses some pieces. One other aspect I really like is the very rich, intricate surface detail on his robot mode parts, and especially on the new head sculpt. 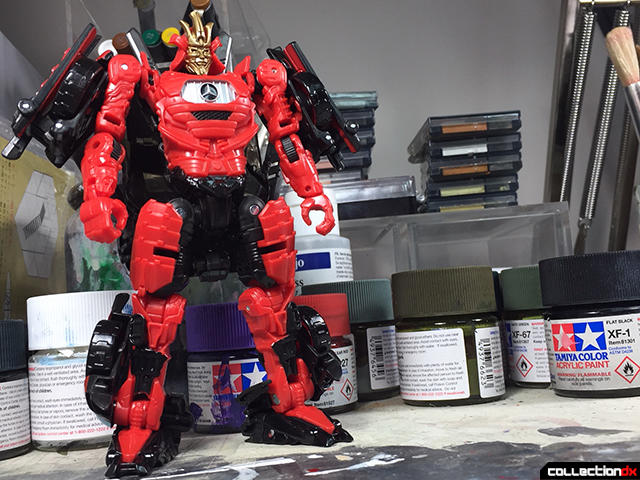 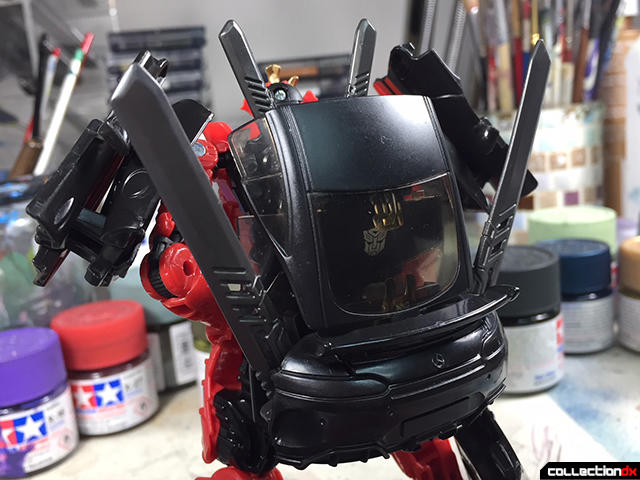 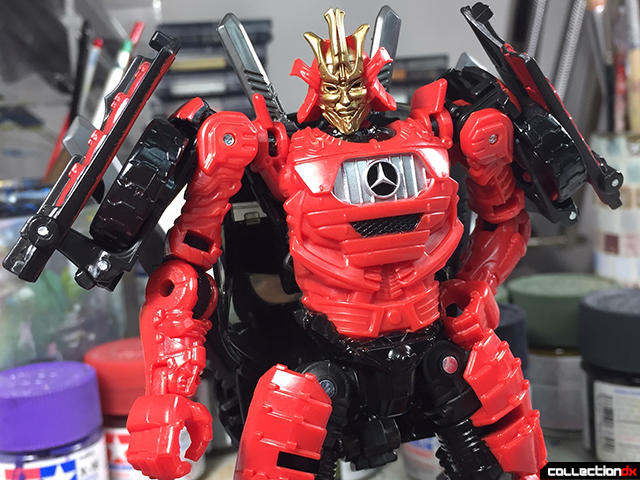 Accessories are also left over from Age of Extinction Drift, but I honestly like them a lot, and to me, they look much better in gunmetal than in gold. He holds both the knives and swords pretty well, and I think Drift is really fun to pose with them. What isn’t super fun, is how they store in robot mode, because I think it’s just not as effective as the Age of Extinction version was. The knives do a much better job, as they store on Drift’s actual back instead of his backpack, but the swords store very loosely on his back bumper. I think they look pretty cool there, but to be fair they barely stay on! One other thing the weapons can do, is attach to Drift’s feet due to how they store in vehicle mode. I really like that you can do this, because it reminds me of “Raiden” from Metal Gear Rising. 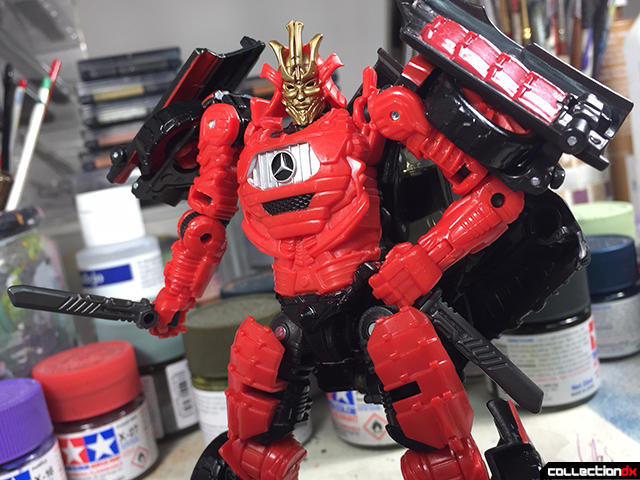 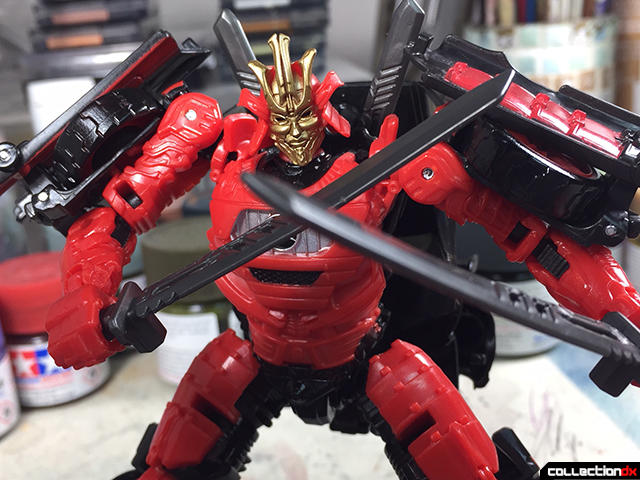 Next to his predecessor, I have to say visually I like The Last Knight Drift much better than his predecessor. That being said, I think Age of Extinction Drift is a little more fun. 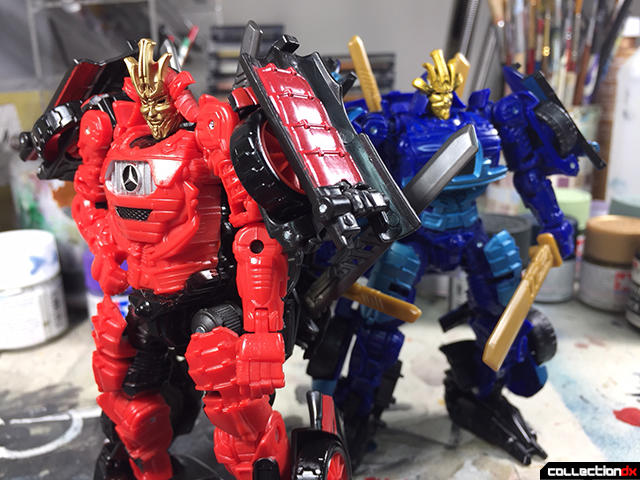 Honestly, I don’t really know which Drift is better. The Last Knight Drift does improve on a few aspects of the Age of Extinction Drift, such as it’s smaller amounts of kibble, more dynamic color scheme, and better looking weapons. That being said, I feel as though Age of Extinction’s Drift had a more enjoyable transformation and vehicle mode. Putting everything into consideration, I think that Transformers The Last Knight Premier Edition Deluxe Class Drift is a figure that is pretty harmless. It’s definitely not a bad use for $15 if you can find him on sale, but if you already have his Age of Extinction counterpart, you aren’t missing too much, and if you can't find it on sale, sadly don't even bother.