So the Saint Cloth Myth EX line has been heralded as the ultimate collectors’ toy line for the Saint Seiya series. With the inclusion of the Galaxian Explosion effect part with the first release, Gemini Saga, came hope that one of the SCM EX line’s staples would be effects parts. This was not the case, save for the effect sheets that were included with the first run of Scorpio Milo. Like a good drug dealer, Bandai knows how to get its customer base hooked on their product with a small sample or two, then they can push their products for a profit.

Being a Tamashii Web Exclusive product, the main box is protected by a brown box. 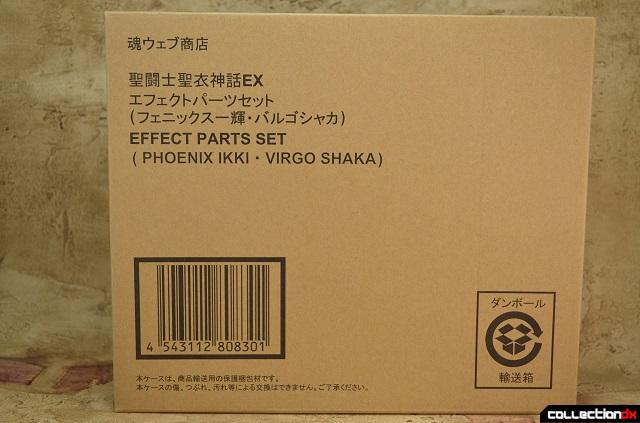 The actual box is a fairly large hunk of pretty cardboard. 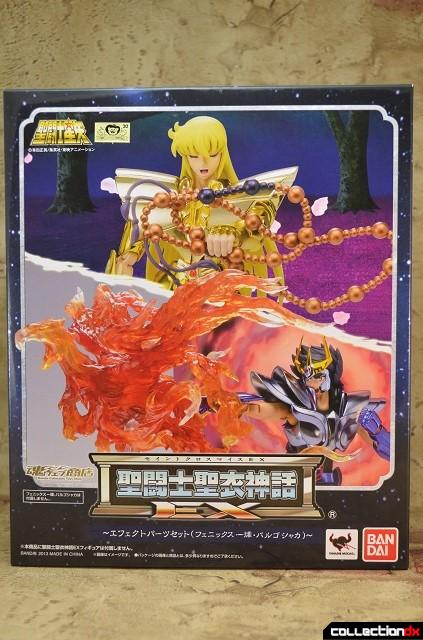 It houses a plastic clamshell with the effects pieces and a baggy with the backgrounds and instruction. 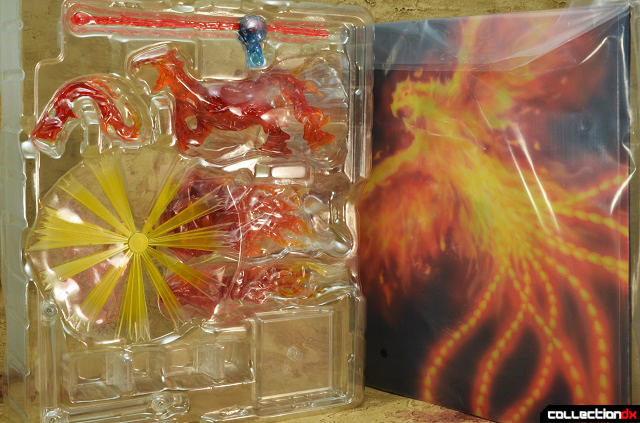 The effect pieces and backgrounds for this set are split in two. About half of the contents are for Virgo Shaka and the other half are for Phoenix Ikki. This pairing is one the makes sense, since Virgo Shaka and Phoenix Ikki are fated rivals from the beginning of the Saint Seiya manga.

The Virgo backgrounds are: 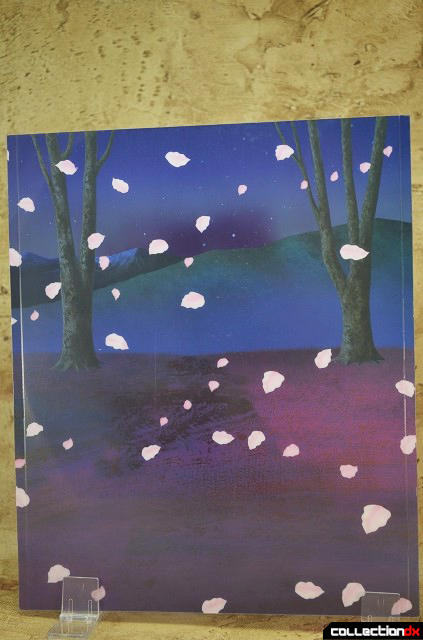 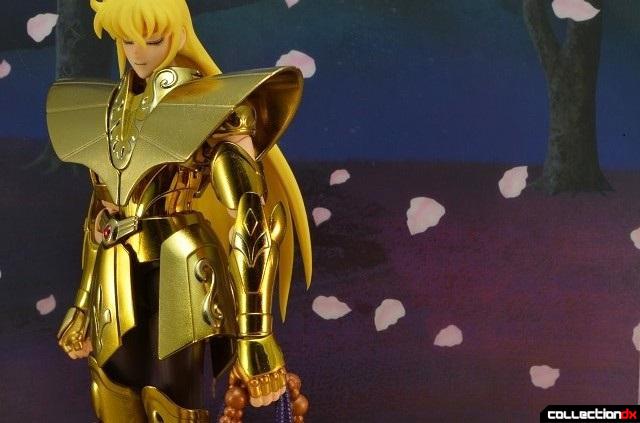 This setting plays a big part in the Hades Chapter of the Saint Seiya series, so it is fitting that this background was included in this set.

The inside of the Virgo Temple; a must-have for the Virgo Saint. 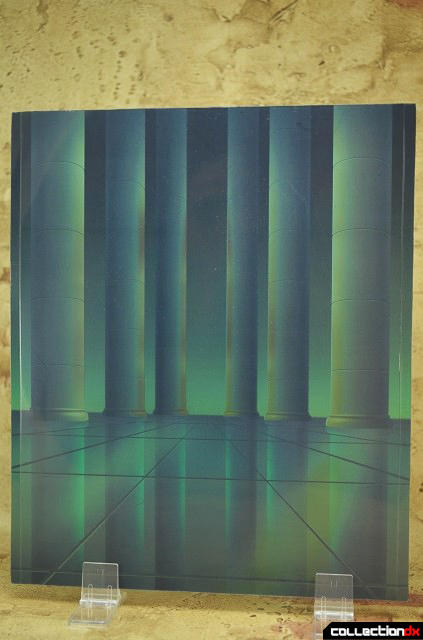 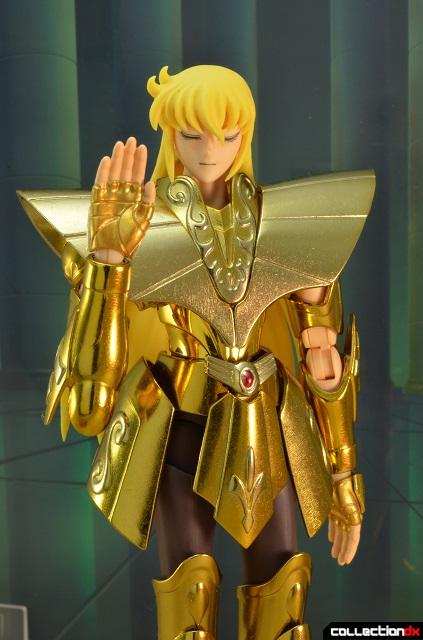 Then there is a sweet lotus background, for posing Virgo in a lotus position on the stand that he comes with. 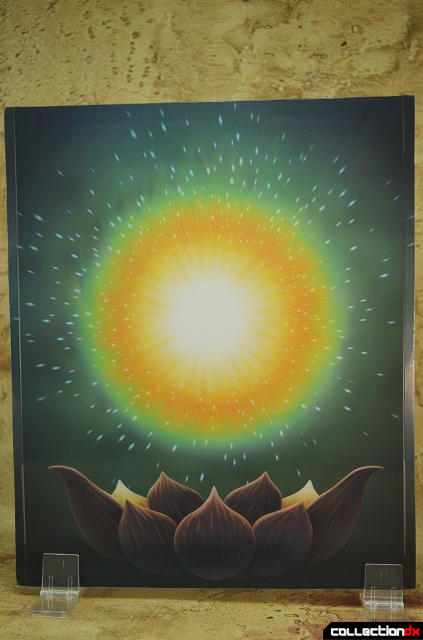 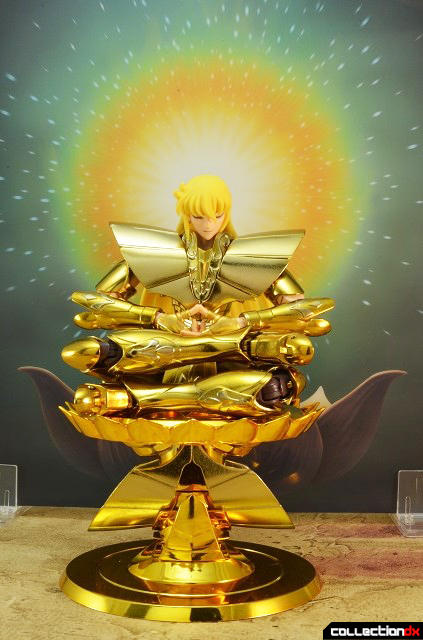 Finally, there is this background which in the show was an actual background. 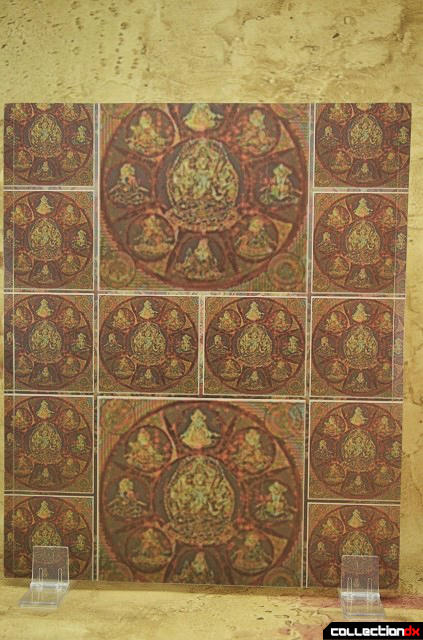 This background was accompanied by Shaka’s Tenbu Horin. It is for this devastating attack that the man closest to god would open his eyes and unleash his most ultimate attack on his opponent, rendering him incapacitated and ready to receive Shaka’s divine punishment.

In order to recreate part of this attack, an effect piece was included. It is a yellow ball with energy radiating from it. 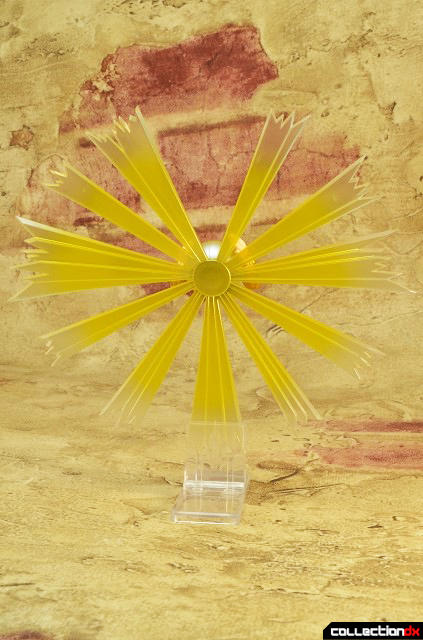 The energy ball comes with two hands that have pegs in them, which fit into the ball and hold it in place. 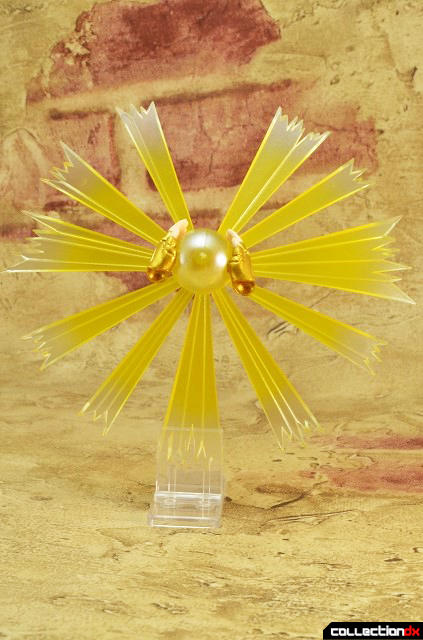 The hands of course fit onto the arms of the figure to complete the Tenbu Horin display. 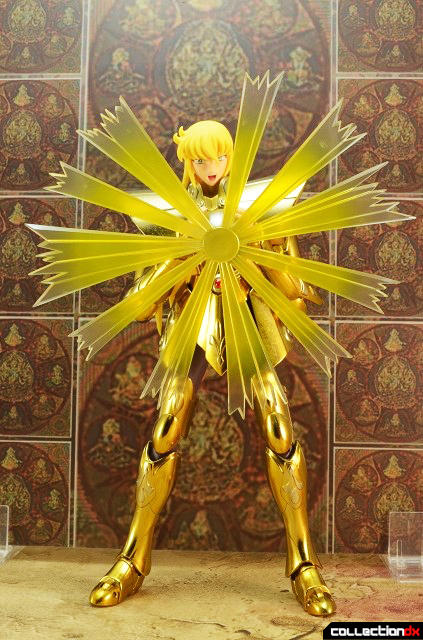 Phoenix, on the other hand, has only three backgrounds.

There is the soaring phoenix background, as it would appear when Phoenix would perform his Phoenix's Wings Rise (鳳翼天翔, Hōyoku Tenshō). 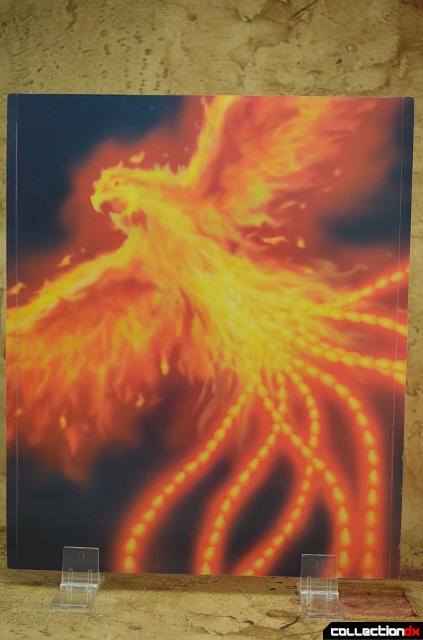 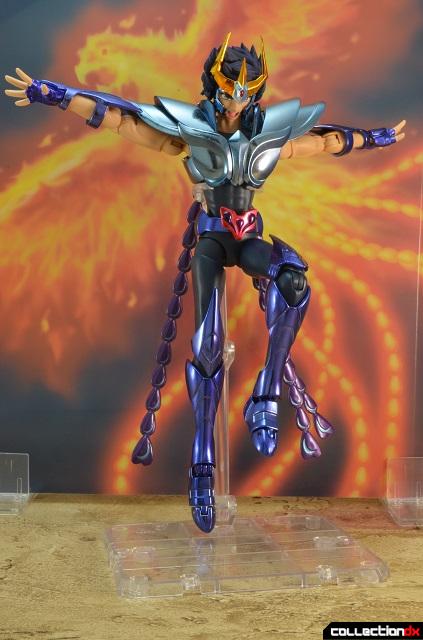 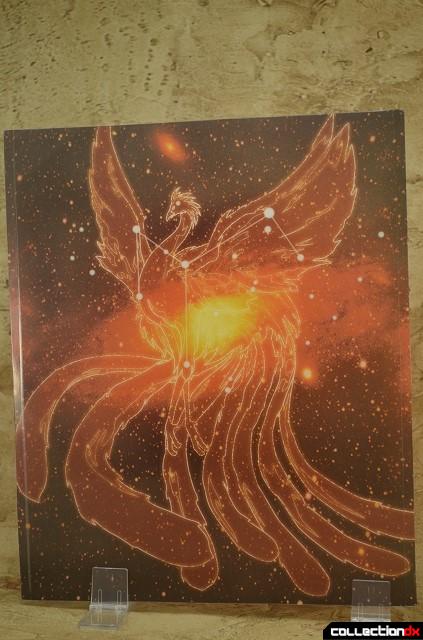 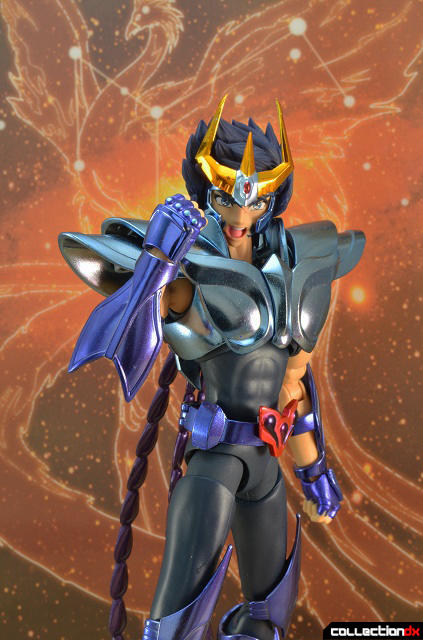 And finally the swirly fire background. 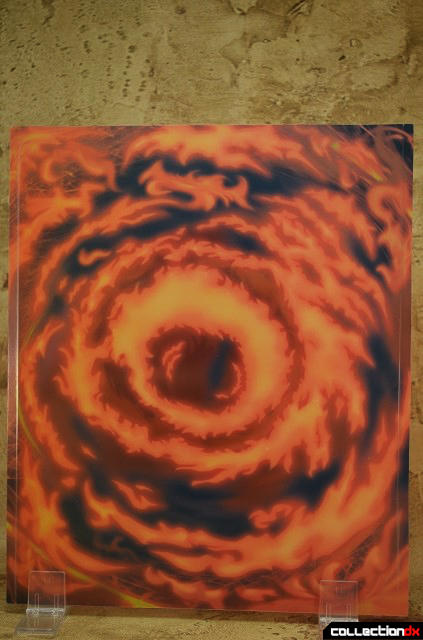 As for effect parts, Phoenix comes with a bit more than Virgo. First off there is the Phoenix Illusion Demonic Fist (鳳凰幻魔拳, Hōō Genmaken) effect parts. This signature attack of Ikki wreaks havoc on the nervous system of his opponent. 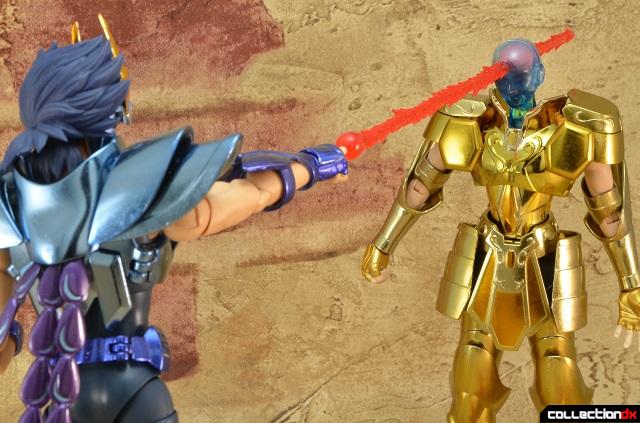 This attack causes the enemy to see hellish visions which the enemy will perceive as reality. This effect part is meant to replicate the effect the attack has on the opponent, and not what the attack actually looks like as it is happening. 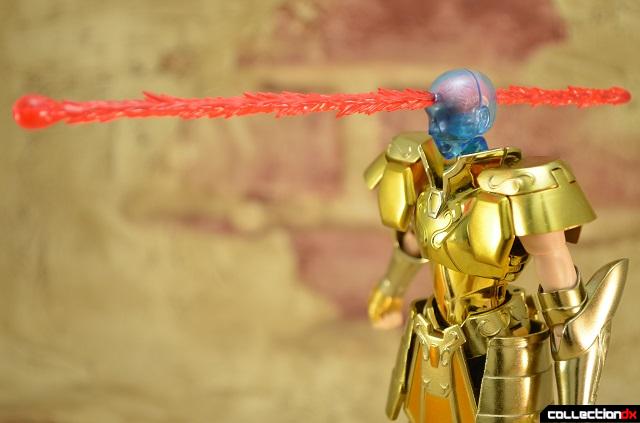 If you look closely enough, you can see that there is a tiny little brain inside of the head, which is on the receiving end of Phoenix’s attack. 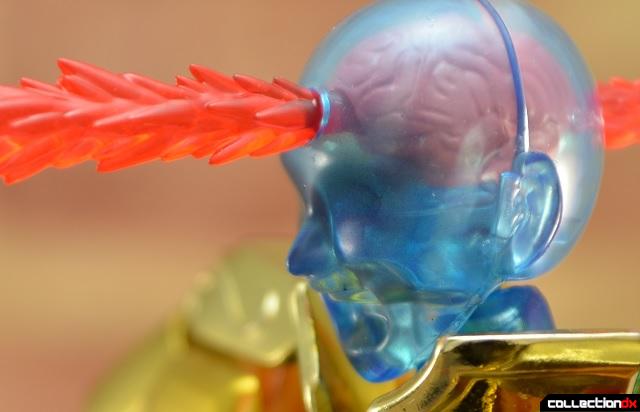 Another thing to note about this effect part is that it represents attack as it appears in the later part of the series, where Phoenix would raise his finger at his opponent and deal the Genmaken without them even noticing. 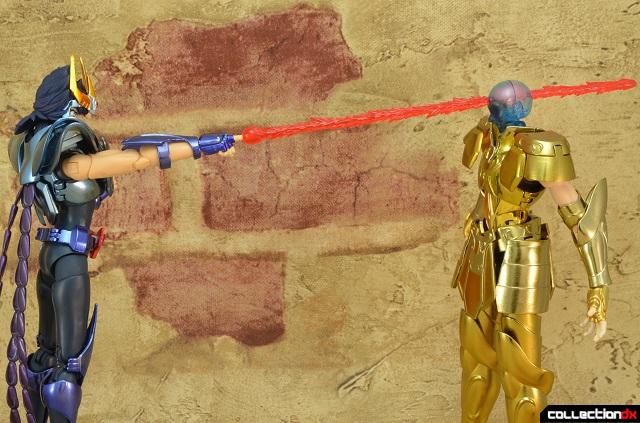 In the earlier parts of the series, Phoenix Ikki would actually punch this opponent in the forehead to perform this attack.

The other effect part is pretty much the reason why I bought this effect set in the first place. It is a flaming phoenix made of soft plastic. It needs to be assembled from the six pieces that it comes in, and then attached to its very own display stand. 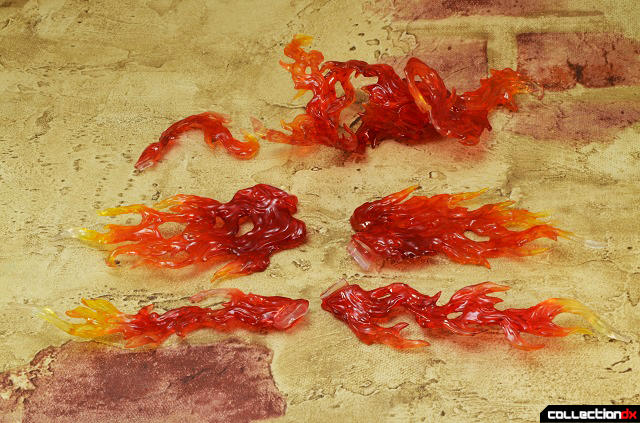 Even by itself, this phoenix looks gorgeous. 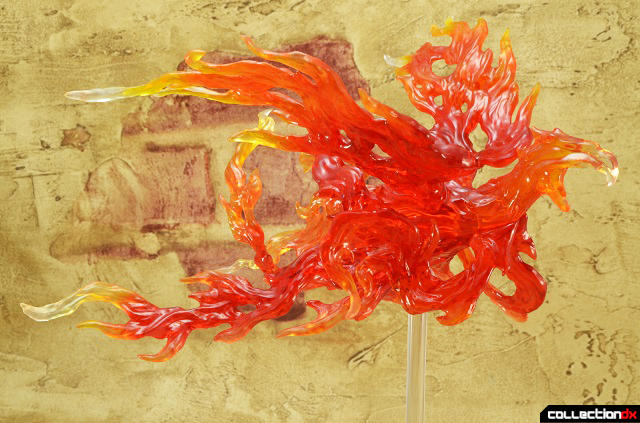 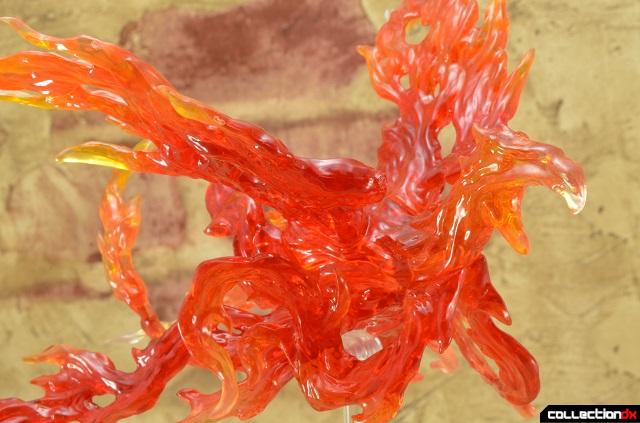 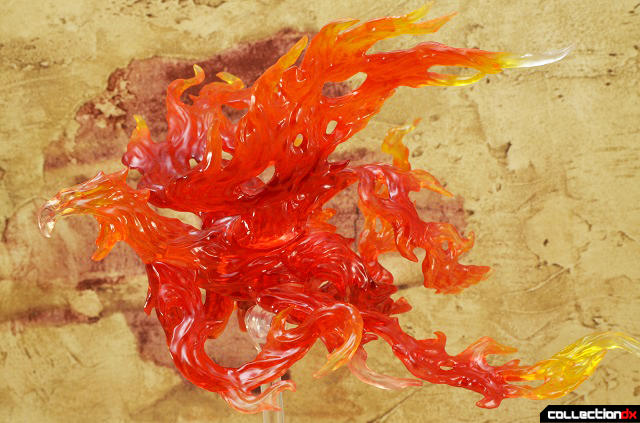 The body is multi-colored, which shows the varying temperatures of the flames on the phoenix. 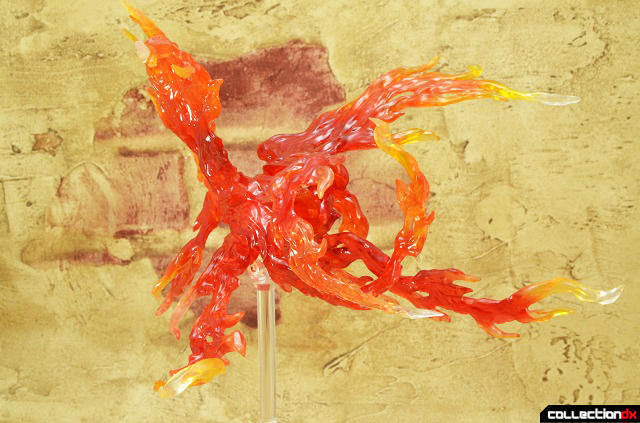 At the rear of the phoenix is a hole so you can stick Ikki’s hand into... 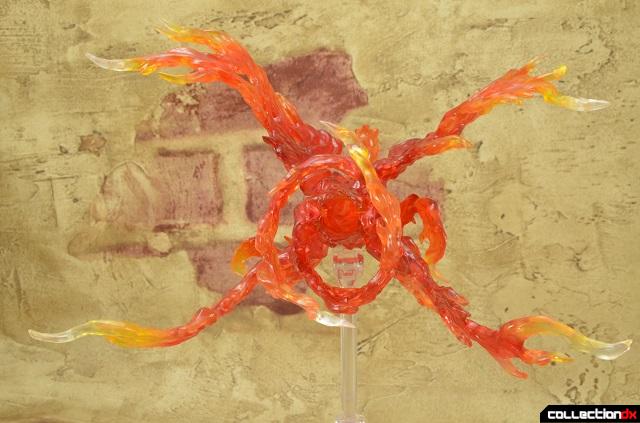 … yea… that is a feature of the phoenix… However, this is so that you can recreate Ikki’s Hōyoku Tenshō, 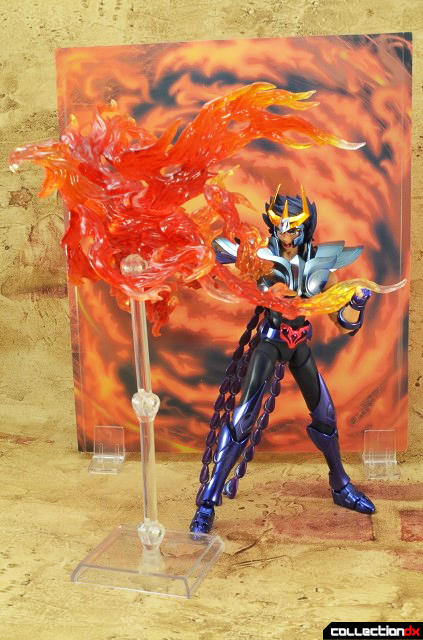 Which ends up looking as marvelous as it does in the promo pictures that sold me on this Web Exclusive. 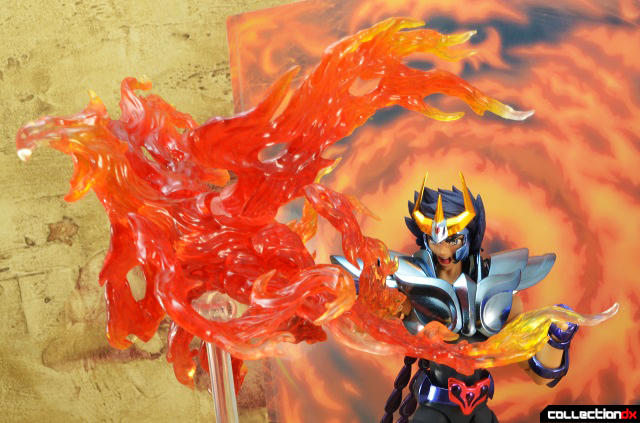 Now let’s discuss the not-so-great thing about the plastic phoenix. Remember how I said that it needed to be put together? Well, that process is a pain in the butt! Whoever decided it would be a good idea for the buyer to assemble it is either brilliant, evil or a bit of both. Getting the five soft and slippery flame to attach to the body becomes a task that requires precision and fineness, since one wrong move can cause one or more of the other pieces to fall off. Furthermore, there is no good place to hold the body while you are doing this. The surface area between the slots for the flames is small and also as slippery as the flames.

So the effect set is a cool, but not essential, addition to the Saint Cloth Myth EX line. The plastic backgrounds are freakin’ beautiful and made from a thick, sturdy plastic. My major qualm with the backgrounds is that Bandai only included one set of clear background holders. So if you don’t own the EX Display Stage, which also has background holders (or any other holders), then you are left to choose between displaying either Phoenix's OR Virgo's background. Since I imagine these pieces must be super cheap to produce, it would have made sense for Bandai to include at least two sets… unless they are trying to sell us on the EX Display Stages. Damn you Bandai for forcing us to buy your stuff!!