If you’re anything like most of the anime community - myself included - you’re a little obsessed with “Black Rock Shooter.” Between the original song, the OVA, the recently released (in Japan) video game for the PSP and the brand-spanking-new anime, there’s a lot to obsess over. Oh, and did I mention all of the utterly incredible figures they’ve made for “BRS”? Because there are a lot. And they’re all amazing. 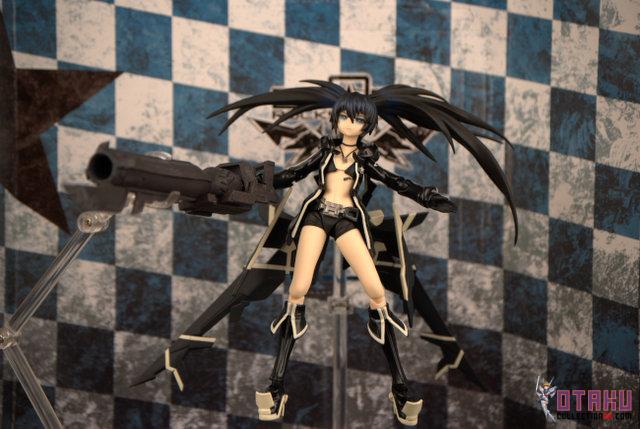 Let’s begin with the box. It’s a standard Figma box. 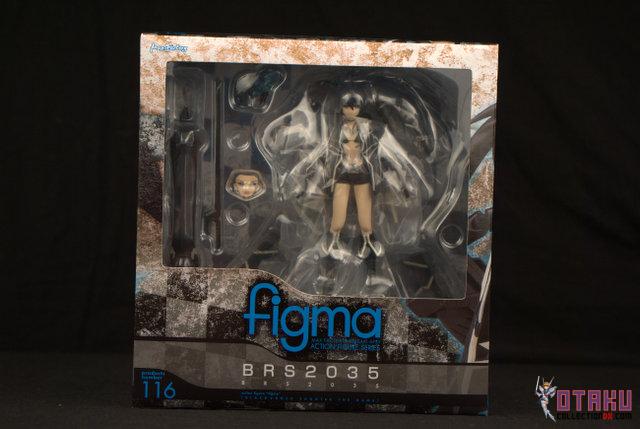 And here she is in the plastic casing, with all of the parts: 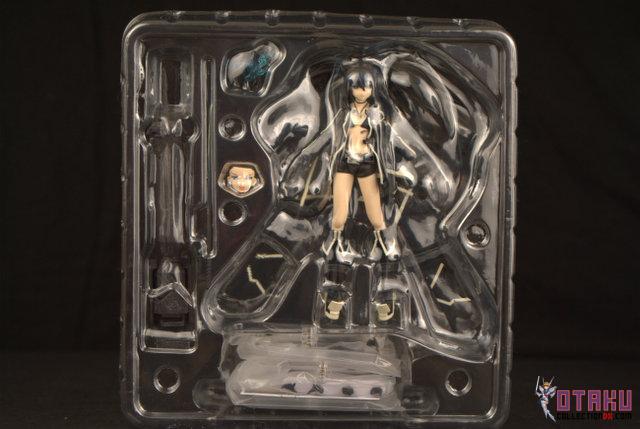 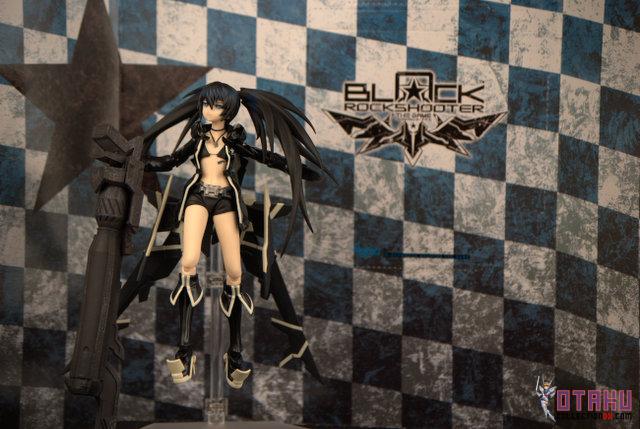 As you can see, she requires two stands (one for her, one for that giant ass arm cannon). She’s gorgeous put together, but (obviously) the gun makes her incredibly front-heavy. She can stand up properly, even with the gun, but it is super easy to stand her just a smidge leaning forward, and then she topples. She toppled while I was setting up these pictures several times. The good news is, I figured out just how sturdy she is - which is to say very sturdy. 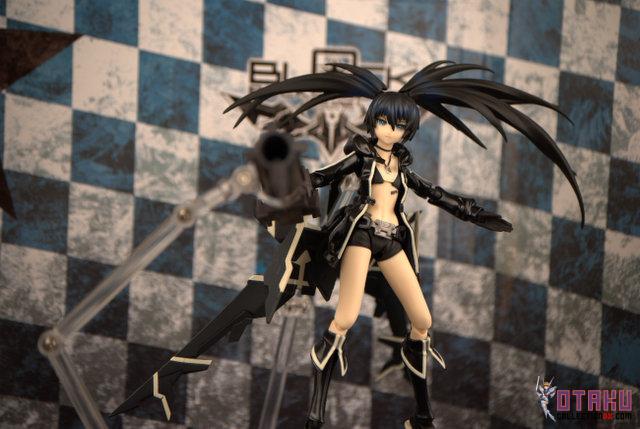 Let’s have a look at her. This is BRS from the game, and as such, there are a few differences between this version and the version we’re use to seeing. For starters, wings. Oh, yes. Wings. They look very tactical in nature, like the wings off a fighter jet. She also has tan (or cream) colored detailing, instead of the standard blue, which you can see in the wings.  They are very poseable; you can move them up and down as well as in and out. 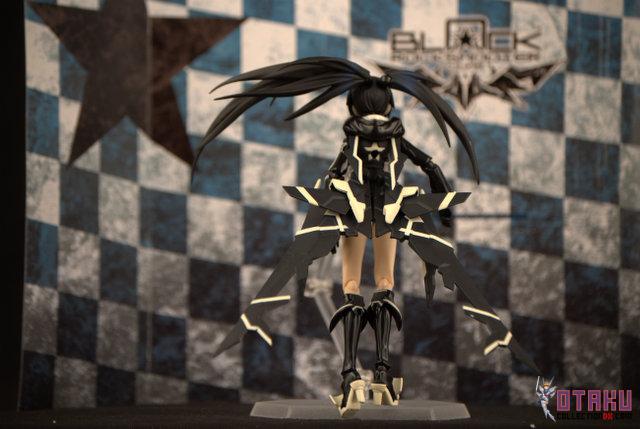 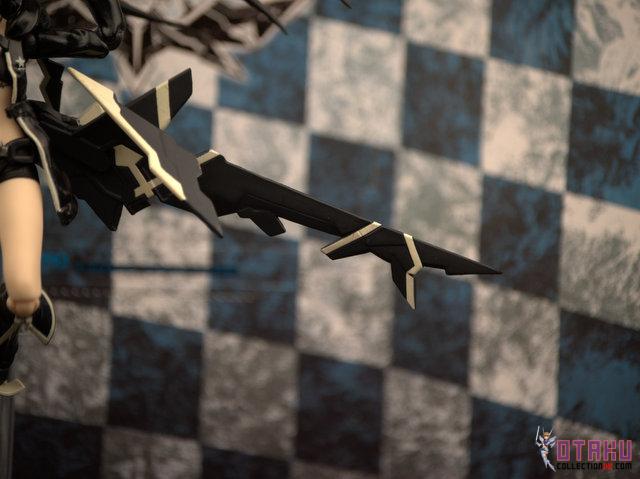 Her boots are also considerably different. She’s got a little bit of flair at the top, kind of like pirate boots.  And then there’s the extremely non-utilitarian, kinda couture flair on the toe of the boots. And that heel - I don’t even know what’s going on there. I do know it’s pretty. 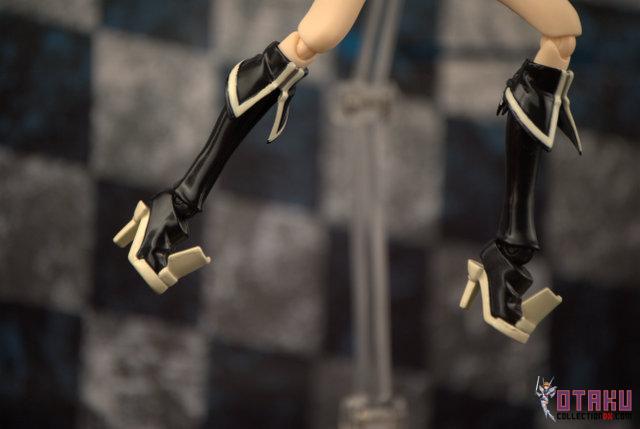 Let’s play with accessories. BRS comes with a bunch of hands, most of which are curved to hold up the gun, but you can do other fun things with them - like have her give people the thumbs up. 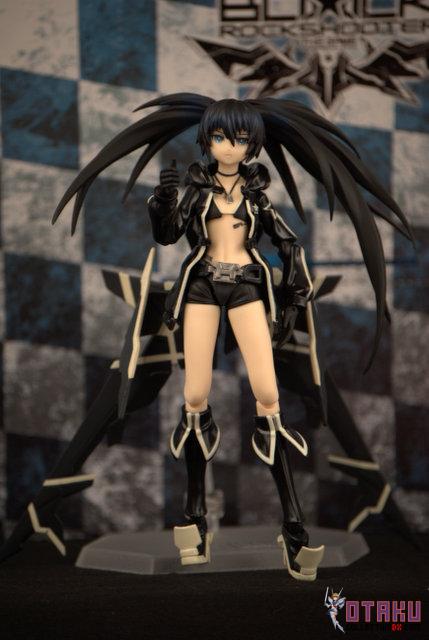 Incidentally, curling her hand around the bar on the cannon is a nightmare. The fingers do bend, but the bars on the handle of the gun make it neigh-on impossible to put the two together while her hand is attached to the gun. My advice? Take the hand off, put it on the gun, then re-attach the hand to the arm. She has no such trouble with the sword. 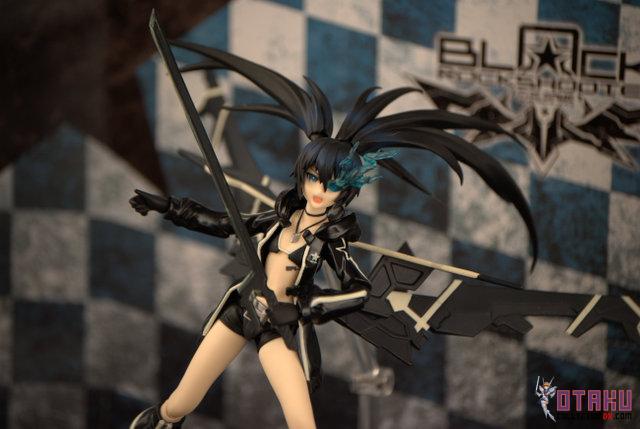 This shot also gives you a good look at her second face,  second hair (with the iconic blue flame), the wings folded out into a different angle and that sword. 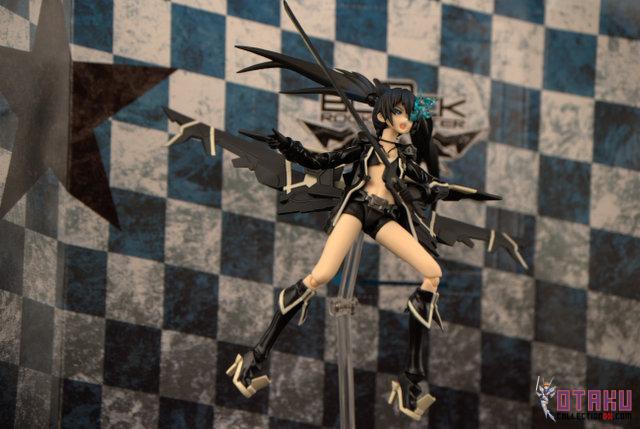 A better look at her torso shows the scars, which have been replaced with bar code tattoos. 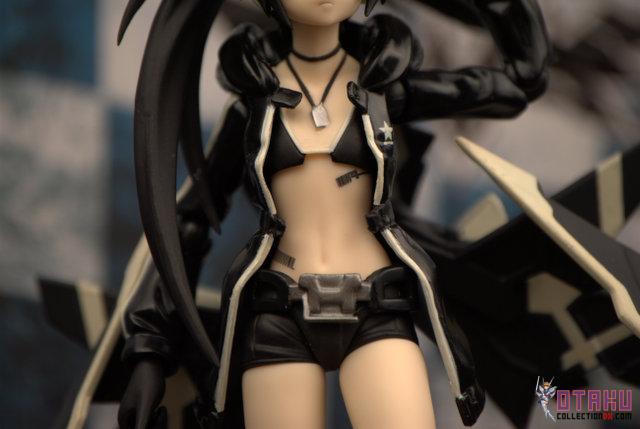 And here’s the flame eye hairpiece with her wistful or sad face. You can see the star on her jacket, the ‘H’ shaped belt buckle (a reference to her creator, Huke?), and the movement in her pigtails. The things can rotate all over the place. They’re pretty impressive. 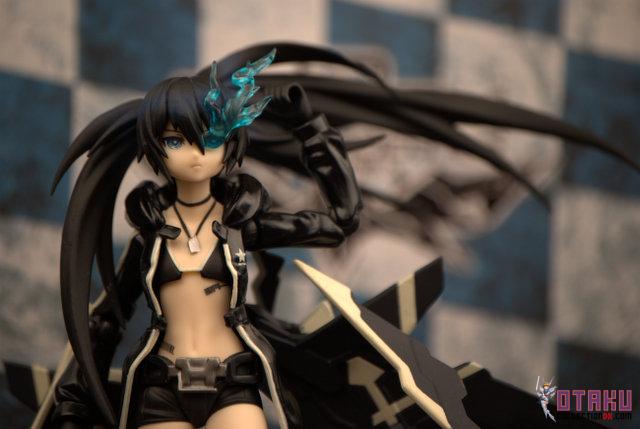 As far as the nitty-gritty details go, this figure is A+ all the way. The paint, the sculpt (look at her stomach’s curve into the belly button, or the paint around the tats. They’re all beautifully done). Her eyes have half-moon hints of Huke’s trademark concentric circles (replacing the bishi stars other artists still use), marking it as a take on the Huke original. It is an adaptation; a lot of things point to that. The tats are a little sexier than the scars. The whole thing is a little more womanly than the young girl looking for her lost friend. It’s not all together a bad thing. While I love the original Black Rock Shooter, this Figma will hold a cherished place in my collection, and some of these pictures have already been emailed around to make my friends jealous.