GX-16, Evangelion Unit 00' is the third issue in the Soul of Chogokin Evangelion collection. It is essentially the same toy as the GX-15 Unit 02. The stand, entry plugs and pallet rifle are the same units that come with the two preceding Eva figures. And, like the GX-14 and 15, The GX-16 also comes with two sets of shoulder fins. One set holds the progressive knife, and needle gun; the other set of fins is sleeker with a sharp leading edge. 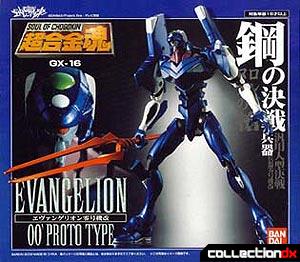 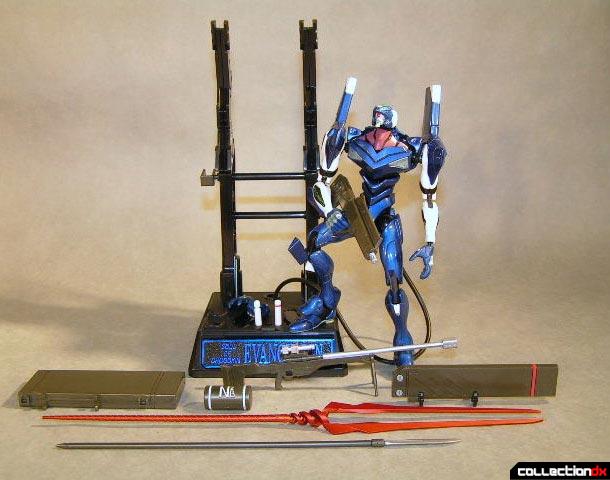 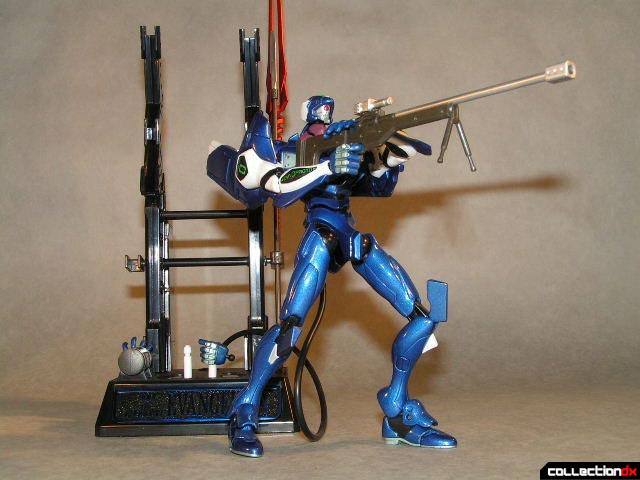 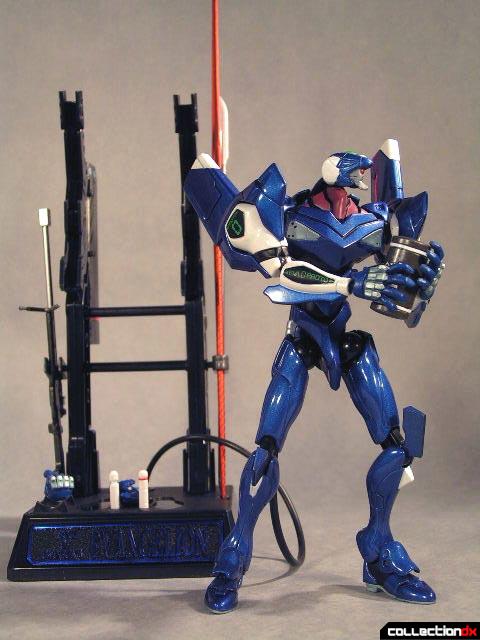 The GX-16 features a new paint job, head sculpt, and some new weapons. Included with the Unit 00' are a sniper rifle, a sonic glaive, an N2 bomb, an auxiliary power pack, and the impressive Lance of Longinus. The good news about the GX-16 is the paint. The deep cobalt blue finish has that candy apple luster that looks so cool on the GX-14 Unit One, and is so lacking in the GX-15 Unit Two.

I already discussed the incredible possibility of the Evangelion figures in the review of GX-15. With the GX-16 I would draw attention to the fine job of detailing throughout the set. The features on the tiny head, and hands are crisp, and clean. Panel lines on weapons are sharp, and deeply cut. The stand reproduces the launch elevator used in the story, complete with working upper body restraints and a socket for the power umbilical. It also stores the weapons in a more or less orderly fashion. The Lance of Longinus is a work of art. 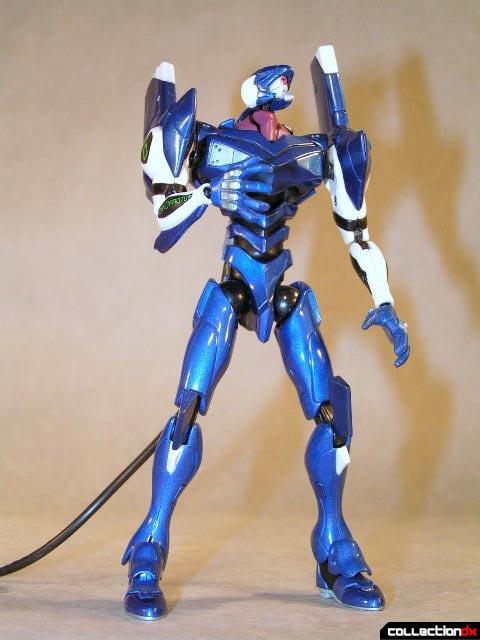 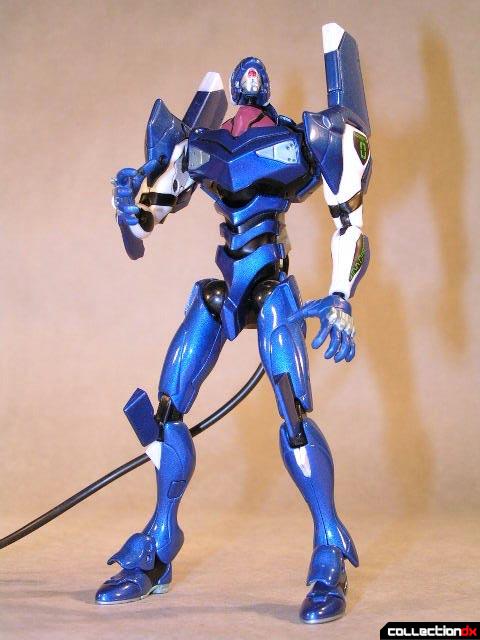 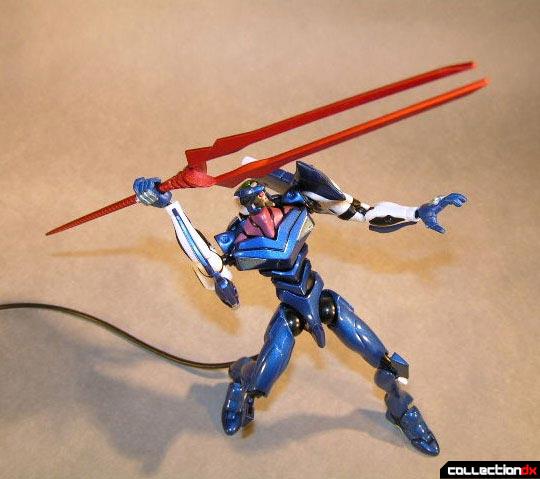 Which brings me to a comment on the entire series of Soul of Chogokin Evangelion figures. Appreciating the Eva figures and their accessories depends greatly on familiarity with the anime. And much of the storyline and imagery in Neon Genesis Evangelion are disturbing to say the least. The Lance of Longinus is a case in point (no pun intended). Consider the name of this implement and the imagery surrounding its use in the story. Here we are far outside the realm of Saturday morning cartoon robots, rocket ships, and supervillains. It's just not kid stuff. Just as Neon Genesis Evangelion is not a story suitable for young children, so the SOC Eva, while a toy, is not a child's plaything. 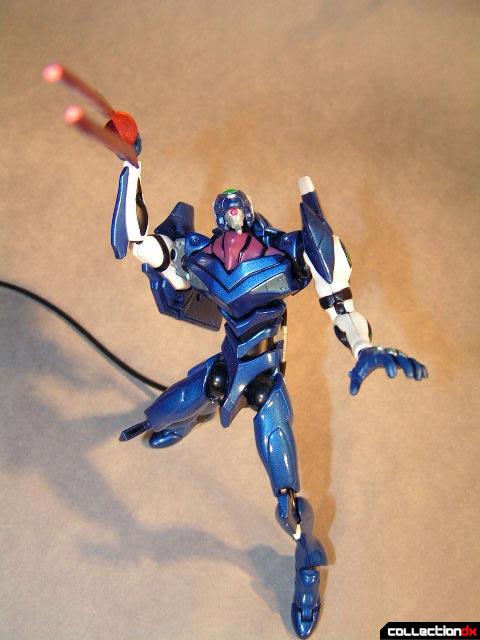 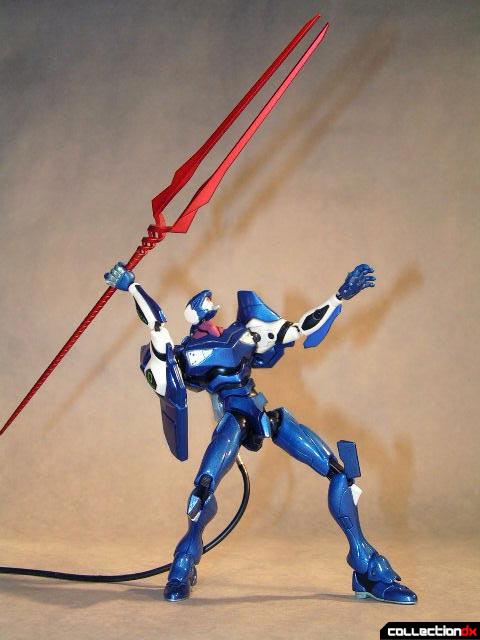 Like the GX-14, and GX-15, The Soul of Chogokin GX-16 Evangelion Unit 00' is an exquisitely crafted figure. Alone, or as part of a set the GX-16 is great addition to any collection.