Bandai recently released a 500mm (20" inches or so) version of the RX-78-2 Gundam in Japan and Hong Kong for 13000 yen ($ 120 or so US). This is the largest production Gundam Toy to date and Gundam fans jumped at the chance to get one. It's articulated at the shoulders, elbows, bicep, neck and wrist. Being a Gundam fan and a Jumbo Machinder fan I had to have one and shelled out $100+ for one as well as $40+ for shipping to have it sent from Japan. 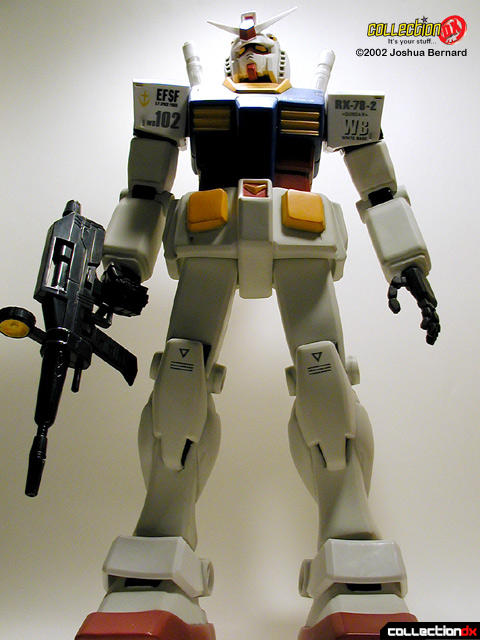 I loved it the moment that I unpacked it. Huge, heavy and excellently sculpted it is one of the most eye-catching pieces in my Gundam collection. It comes with a set of open hands and a set of hands to hold the beam rifle and shield that are included. The rifle and shield come as a snap together model kit and thus earn the figure the name "Jumbo Grade" (note: Bandai rates all of their Gundam Models with grade names like "Master Grade", "Perfect Grade", "First Grade", but doesn't make grade distinctions on toys). 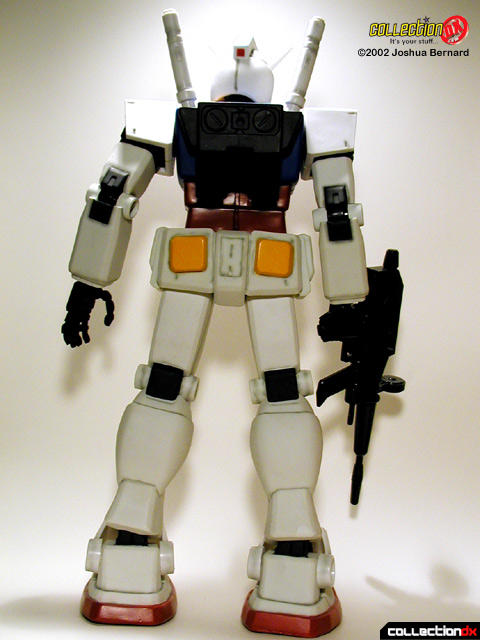 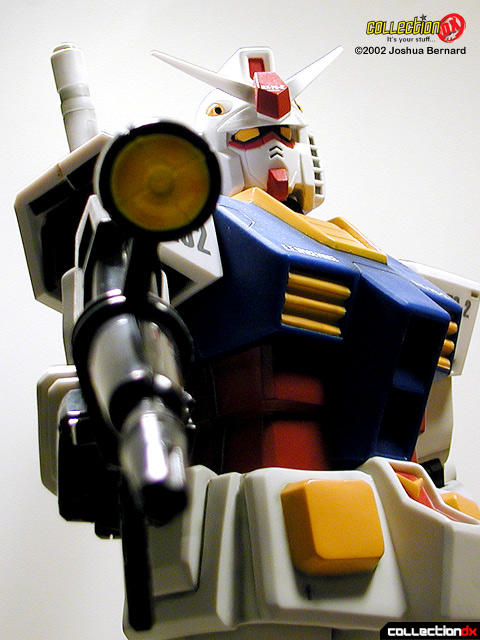 So what could make it any better? What about the same toy, with added accurate markings, the same level of quality at 1/3 the price!

Several weeks after I got the Jumbo Grade Gundam, a friend spotted a Jumbo Grade with "Special Markings", but after a little searching I found that it was a bootleg version made in Hong Kong. 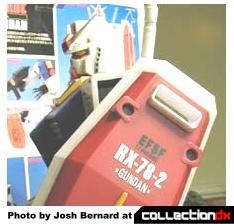 Regardless of the legality of bootleg figures, they have become fairly commonplace in the toy industry. They are normally cheap, poorly constructed copies of the originals and are made of inferior materials. Bootlegs almost always have less articulation, less and often sloppy paint details and shoddy packaging. None of this is true of the bootleg "Jumbo Grade Gundan"Â.

"Gundan"Â? The bootleggers think calling it "Gundan" is going to help avoid a lawsuit?

I was blown away by the quality. While there are slight differences, the bootleg can't be called cheap by any means. This thing is only slightly (very slightly) shorter then the original and has all of the same paint, articulation, weight and detail as the original.

1) Really cool markings including model number and white base very much like the Perfect Grade RX-78 kit. For all you who can't tell an RX-78 from an RGM-79, the special markings are very much like the model numbers on airplanes, example: WB stands for White Base, which was the ship that the RX-78 was assigned to. Odd thing is that the decals on the lower legs appear to be a warning, but make no sense. I'm not just talking bad grammar here, some of the words aren't just misspelled, but look made up! Words like, "COYRO"?

2) Two piece shield, original has 3 piece (makes no real difference, just less to assemble (note that they use the original's instructions, so it appears that you're missing a piece!)

3) Bootleg has less stiffness in the joints, in fact mine can raise his arms higher then the original!

4) Has the top of the backpack painted blue (original is Black) as if it were supposed to be a part of the chest.

Other then this they are pretty much the same. I was completely floored with the quality of this thing. Bandai has just released a Jumbo Grade Zaku (a bad guy) to go with the RX-78-2 and I am keeping my fingers crossed that the bootlegers have a go at the Zaku!

Now the best part. The Jumbo Grade Gundan retails for $39 in Hong Kong. That means you can get one including shipping for less then the original. -Brad

Brad Walker collects American and Japanese action figures, customizes them, and "hangs out" by sitting on the hood of a car drinking Colt.45 at his local Dairy Queen parking lot. "Gai-Jin" is what he calls himself, but most folks call him "white trash". You can reach him at gaijin@zappowbang.com if he can get his PC to work, and if he's in a good mood he will reply.