Any warm-blooded kid over the age of about 30 is likely familiar with the classic Kenner Star Wars action figure line that debuted in 1978 and had a lasting impact on the toy industry.  Outside of the United States, however, there were toys released by companies other than Kenner that are also really terrific.  You may have heard of one such company, none other than the Japanese titan, Takara!  The most prolific and common Takara-made Star Wars toy is a wind-up R2-D2 that is around the same size as the Kenner release and was available in Japan and Canada.  The toy is all plastic, and who has time for that?  Where Takara really flexed their creative muscle was in a brief line of proper chogokin Star Wars figures made on a larger scale than the Kenner toys.  Info and pics of these toys can be hard to find, with the best English-language write-up appearing in the final issue of Super7 Magazine (now available for free here), but even that has hardly any photos of the toys.  I’ve been working on collecting this line, and next in line for review is the bumbling protocol droid, C-3PO.  My goal with these reviews is to provide some much better pics of the toys than have been previously available, and to showcase how darned cool they are! 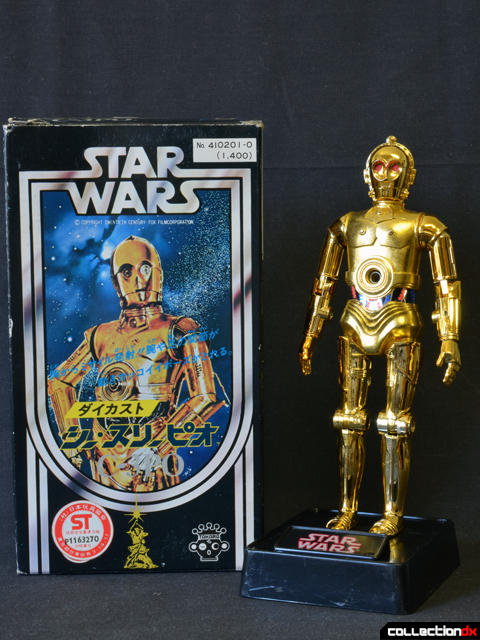 Takara’s C-3PO comes in a printed box with a design theme that matches the American Kenner line cardbacks pretty closely, but features lovely painted character art instead of a movie still.  3PO came packed in a styrofoam tray with a lid, but I do not have it to show you.  Also included in the box is a display stand, a small pamphlet, and a small sprue with two missiles that I am unfortunately missing.  Of particular interest is the price label, which is printed directly on the box, listing a retail price of ¥1400. 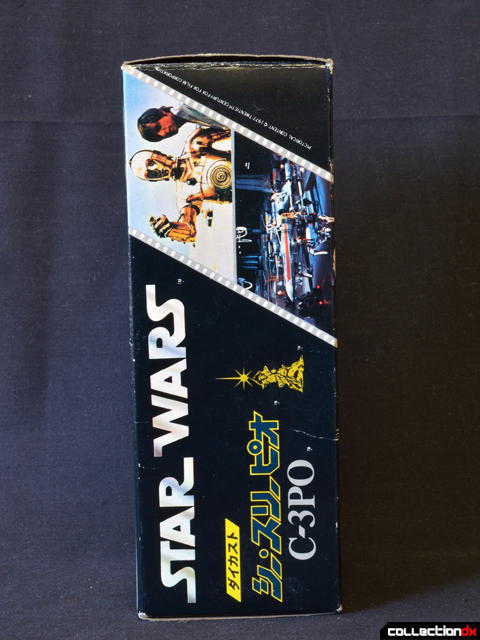 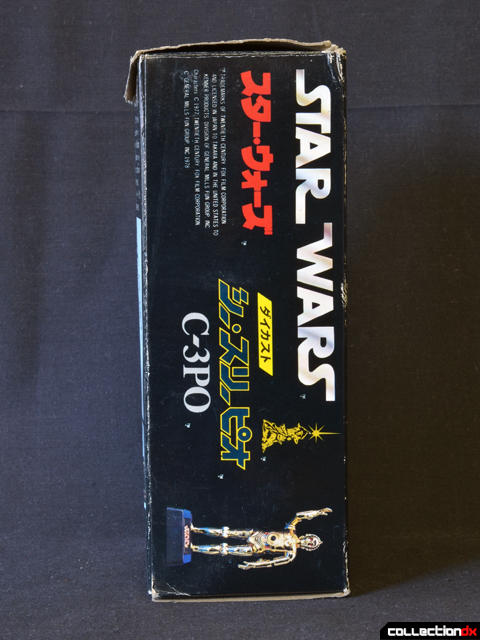 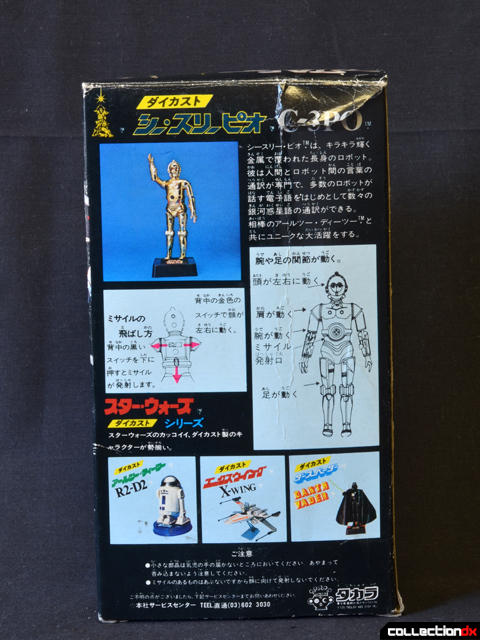 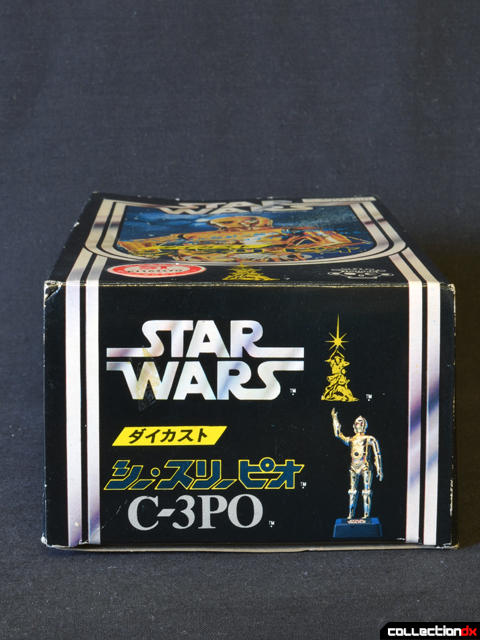 Here’s a full turnaround of the box for reference. The top and bottom lids are printed the same.  One thing I really like about the Takara Star Wars diecast figures is how the instructions are printed on the box so they are harder to lose than if they were on a little pamphlet. 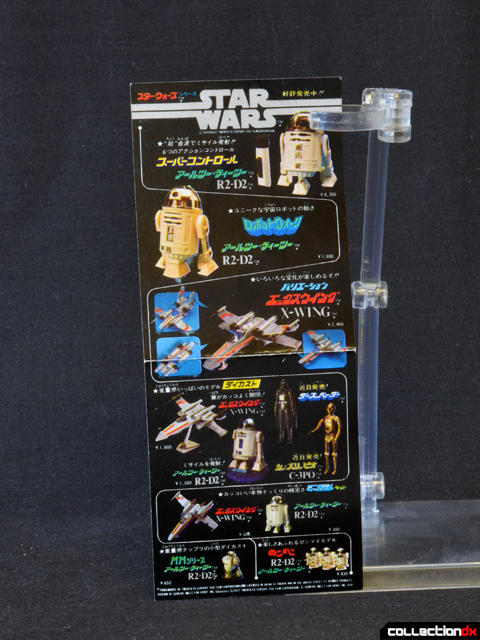 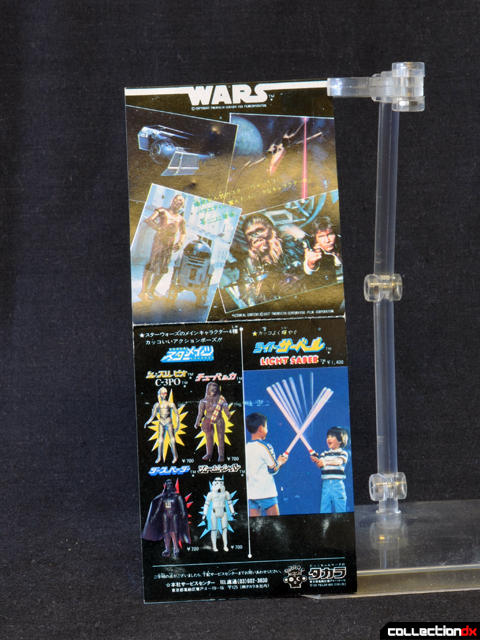 The small pamphlet included features other available Takara Star Wars items.  Of special note are the sofubi C-3PO, Darth Vader, Chewbacca, and Stormtrooper.  Those toys are something I hope to be able to document here if I can ever find them (and afford them!).  Plus, check out that kid with the lightstaber’s shorts! 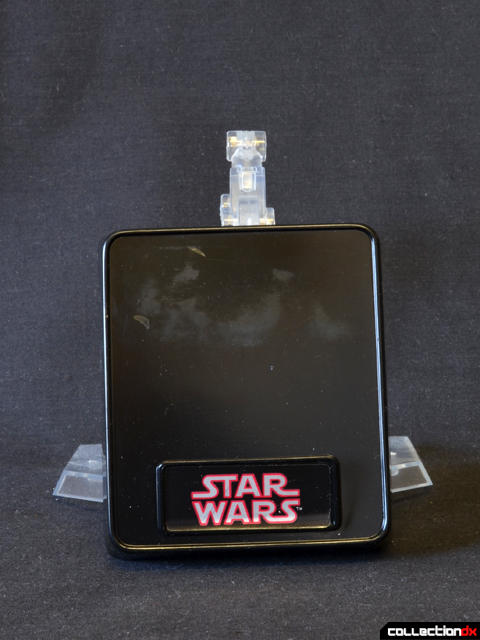 The display stand is a single piece of black plastic with a nice foil sticker for the logo.  Mine has obviously been displayed because there is a little bit of scuffing from where C-3PO stands.  There are no pegs or anything to hold the figure in place. 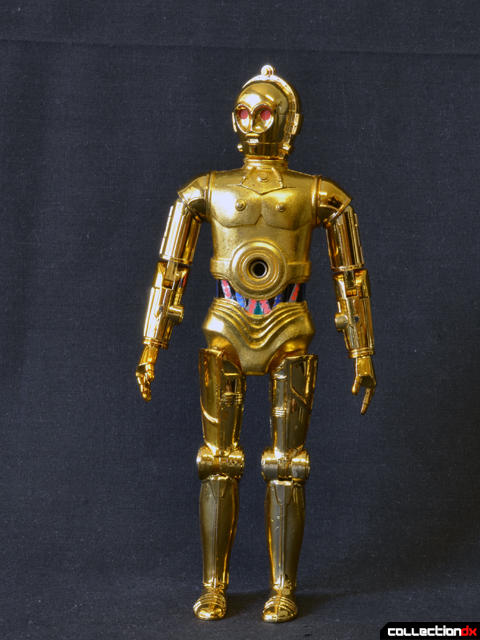 Now let’s get to the figure!  Takara’s rendition of the iconic golden droid is nothing short of beautiful.  It’s easily my favorite version of C-3PO.  It has an unmistakably classic vibe, making an even stronger nod back to Metropolis’s Maria Maschinenmensch than the actual C-3PO costume does.  This is most evident to me in the head design, with the textured rim being more prominent on Takara’s sculpt than 3PO’s actual noggin, and more closely resembling Maria’s dome.  The face is a little less human and more dead-eyed than the movie costume.  The toy stands 6 ½” tall, making it a little big for 1/12 scale, but still a little small for displaying with your Megos. 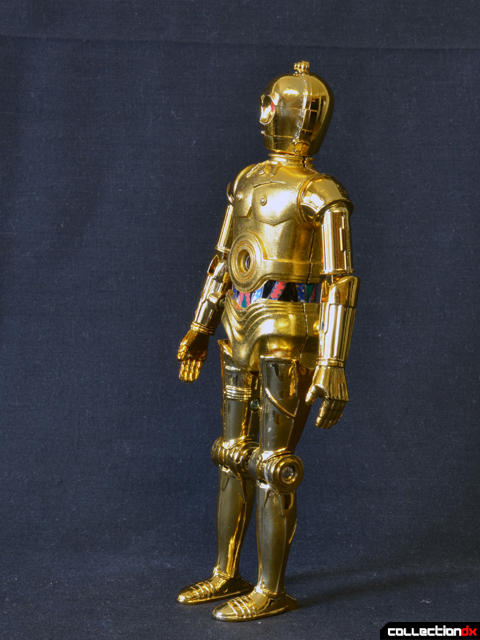 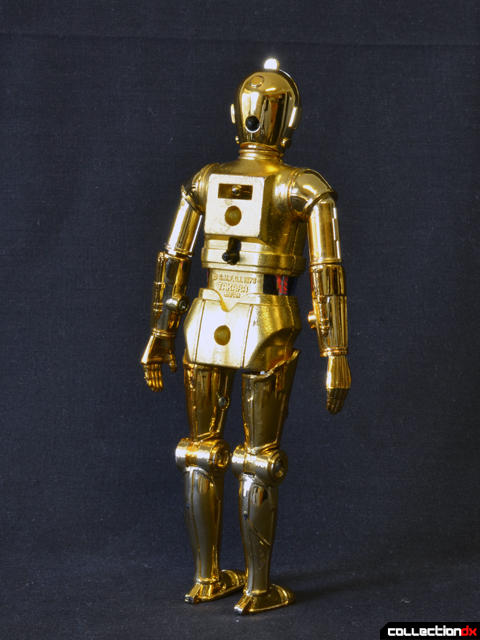 In addition to being gorgeous, Takara’s C-3PO is also lovingly crafted.  The entire trunk of the figure is made of diecast metal with a somewhat matte gold-plated finish, while the limbs are plastic and properly chromed in gold.  The contrast in finishes is not accurate, but it adds something for me, maybe in the visual weight that being able to distinguish the metal parts adds.  The foil waist sticker adds the wiring detail, and is total classic late 70’s robot toy design. 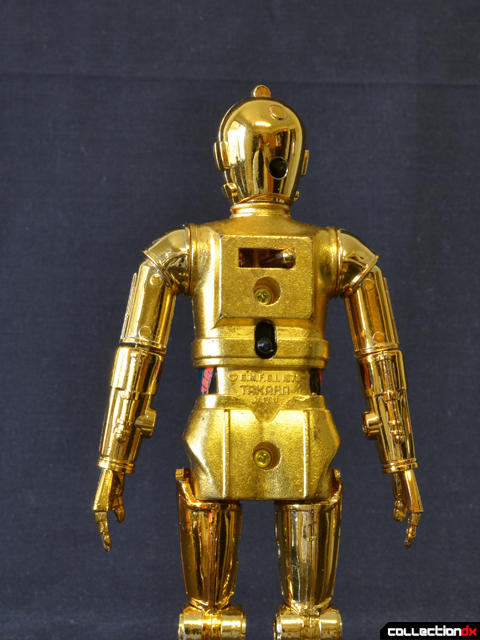 Detail is sharp throughout, but the back is a little bare to make room for the Country of Origin (COO) mark and two action features.  The COO reads ©G.M.F.G.I. 1978 TAKARA Japan.  As I mentioned in my Takara Diecast Missile Fire R2-D2 review, the GMFGI stands for ‘General Mills Fun Group, Inc.’.  The lever between 3PO’s shoulders is attached to the neck and allows you to rotate the figure’s head.  The lower black lever is the trigger for a spring-loaded missile gimmick in the figure’s belly.  Sadly, I do not have the missiles for this, but I love that Takara found a way to get a shooting feature into the loquacious protocol droid. 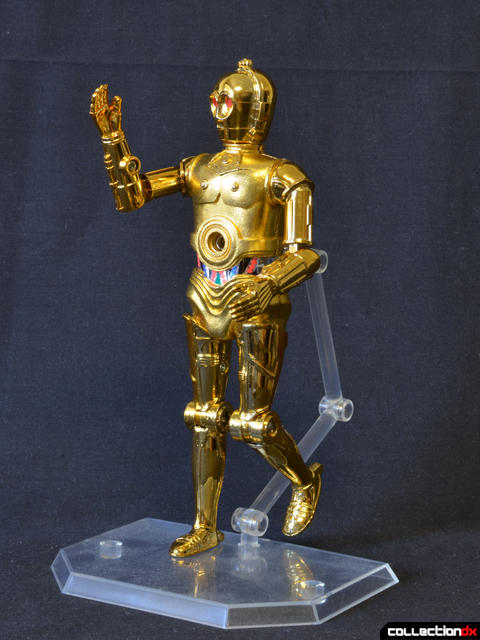 C-3PO’s articulation is up to the standard of gokin robots at the time, with movement at the neck, shoulders, elbows, hips (a little), and knees.  The hips are weird, and are sort of freely mounted to the diecast metal waist.  When you pick the figure up, the legs rattle a little at the hips, but this point does not allow for any actual articulation.  The figure’s heavy metal torso makes the toy settle in place when standing, so it is not tippy at all even with the hips.  The toy cannot really stand when using the knee joints, but I appreciate the inclusion of the elbow joints, allowing for some proper protocol droid poses. 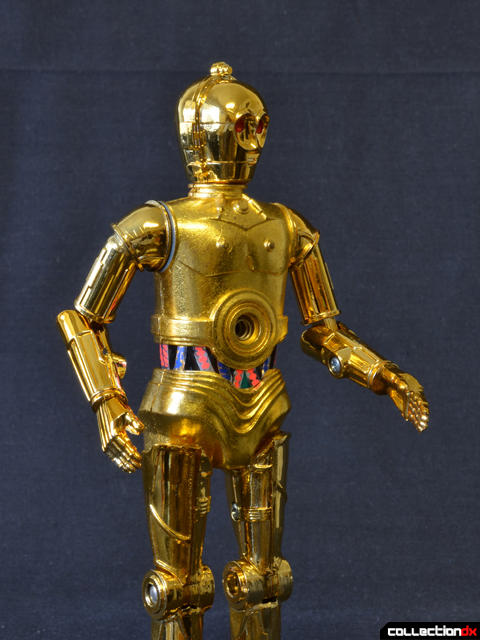 The eyes seem to be separate red plastic parts and add a lot of life to the face.  The color is not accurate, but it fits the overall feel of the toy much better.  The whole design has a more retro, pulpy robot vibe than the film version.  I can see this guy walking real stiff-legged with little lightning bolts coming from the bolt on the top of his head. 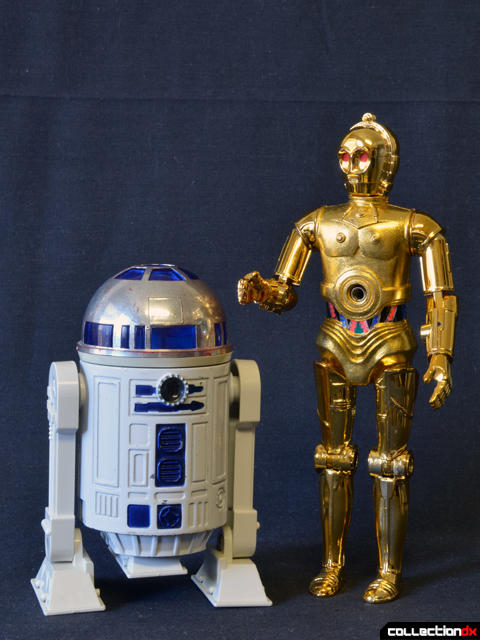 Shown with the closest-scaled Takara R2-D2 companion, the droid pair looks great.  This R2-D2 is the diecast version with a movie slide viewer built in, and the requisite missile launcher feature.  I’d like to review this toy as well, but my copy is a little rough. 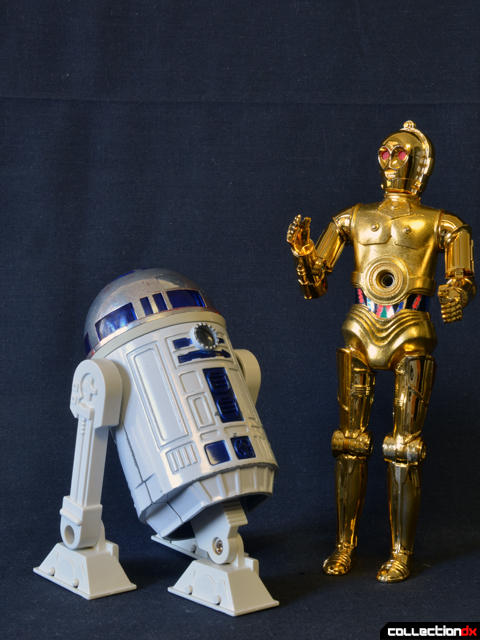 ‘Don't call me a mindless philosopher, you overweight glob of grease.’ 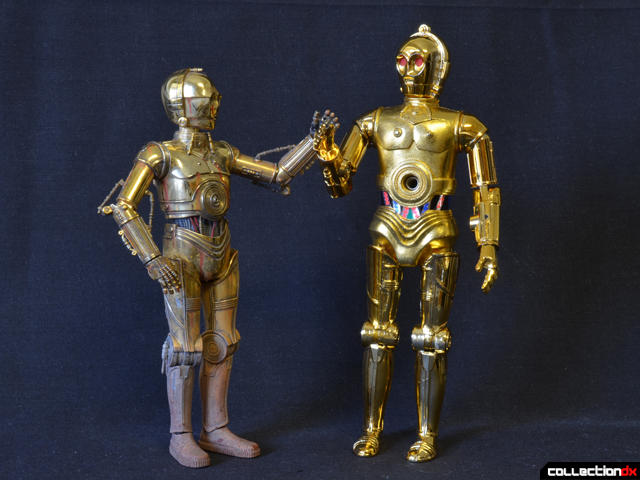 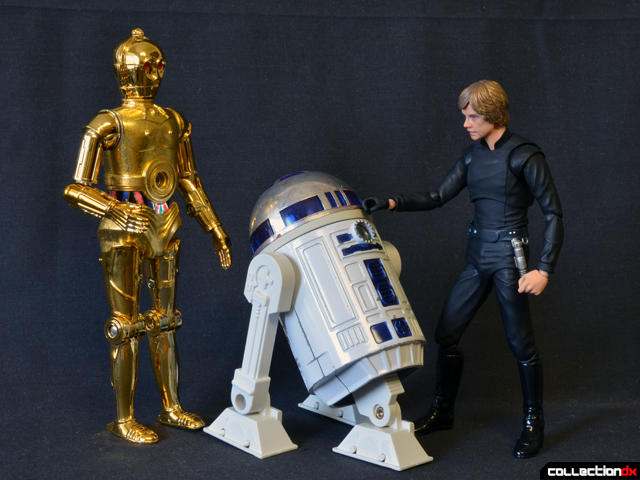 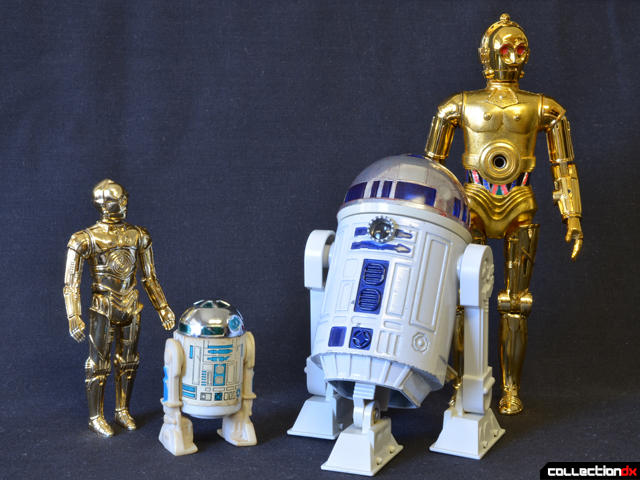 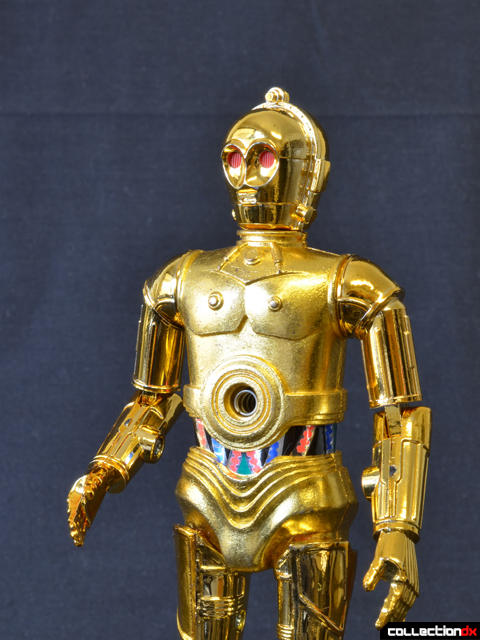 Most of my Star Wars collection centers on the Imperials and droids, so this toy is a perfect fit for me.  What I did not expect was for it to be a serious contender for my favorite Star Wars toy ever.  C-3PO was never my favorite character, but I have always loved the droids in Star Wars.  More than that, I love how this figure bridges the aesthetics of European ‘android’ design with classic Japanese robot toy design.  It’s sharply detailed, has just the right amount of movement and play features, and is decidedly funky.  As Star Wars toys go, this and the other Takara diecast figures are pretty obscure in the States.  With some perseverance and the right contacts in Japan, they can be had and are so, so worth tracking down.  For those that cannot take the plunge, hopefully this review serves as adequate documentation so people can at least know what’s out there.