I do speak for many SZ collectors that I would wish Bandai would revive this line again.

So I was pleased to hear in 1999 toy manufacture Yutaka released a new "Spiral Zone" Figure, Chirico Cuvie of Votoms fame. Keeping with the high-end aura of the original SZ figures it retailed for $40.00. As it wasn't a priority I held off buying the figure for a few years until the importer of the line in USA dropped the price to $9.99. Twenty years after I bought my last SZ figure I was about to get another. But how similar are the Bandai SZ figures to the Yutaka figures. 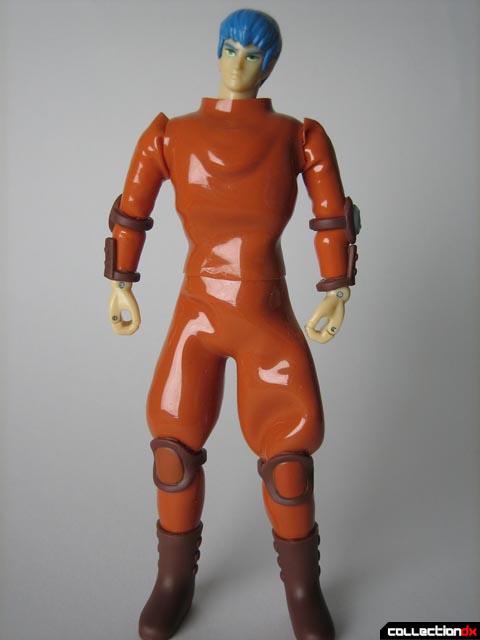 Chirico comes in a small generic black box with only a sticker to denote this figure from the other three in the series. The contents of the package includes one orange rubber suited 1/12 action figure with knee and arm pads and wristlets, one spruce of parts, 2x rubber belts, 2x shoulder pads, one rubber hose, a neck collar ring and photocopied instructions. 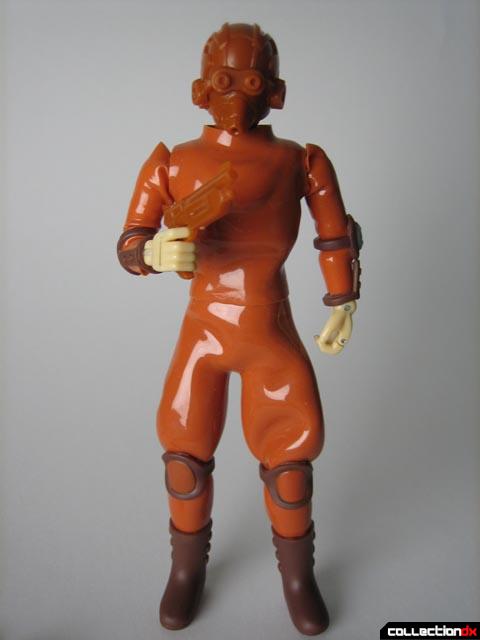 One item I was disappointed in was the figure's uniform, which was made a sticky orange rubber. Original Bandai SZ figures included one piece clothe suits in their sets. Chirico's rubber suit is molded in four parts: the pants, the shirt and both the left and right arms. Although the rubber suit does looks sharp on Chirico I never like rubber as main feature of toys as over the years it usually easily breaks apart or becomes very sticky and attracts dust. It also takes a bit time to remove the outfit because it sticks to the figure. The three other figures in this line all have cloth outfits why this one was rubber I don't know.

One feature I was happy with is figure comes with his cool helmet and pouch belt kit. But this is where I feel that the designers at Yutaka lost focus. Bandai SZ figures were like small model kits, they came with spruce of armor, belts and gun parts but after one was assembled it can be played with then taken apart to be stored back into the package. Yutaka chooses to have all the belts, oxygen tank, shoulder pads and other small parts glued to the figure's orange rubber outfit. The neck collar ring part badly designed as the hole suit is larger than the neck collar ring. I chose not to glue the parts on and will use a couple rubber bands to keep the Items on for display. 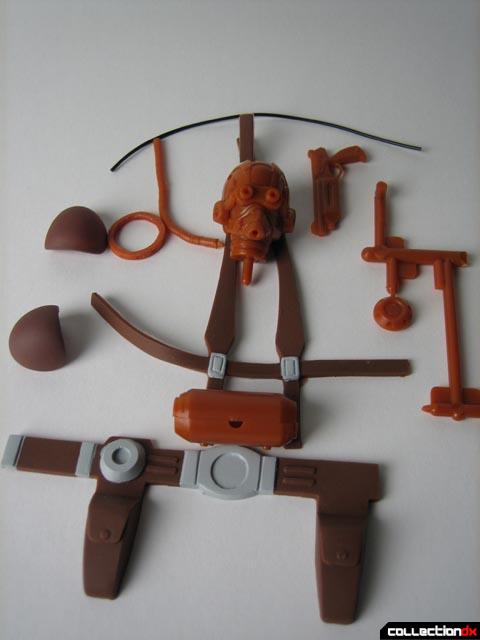 Although I had to go online to correctly assemble Chirico's helmet, it looks great when assembled. To put the helmet on you simply remove the sculpted Chirico head and replace it with the helmet head. His gun looks great and has the typical trigger finger hole on the gun as with all SZ figures. Painting is required for both the helmet and gun.

Another Item I was completely impressed with is the Head sculpt. It's well done and is one of my favorites in both lines and it's great to see such an iconic character such as Chirico as SZ figure. But keep in mind that the Bandai SZ bodies and Yutaka bodies are different. SZ bodies are made from a different type of plastic than the Yutaka figure. Although both have the same features Yutaka figure are more simplified versions of Bandai figures, mostly in the bust area, waist and shoulders. Both have the famous trigger finger and the hands separate at the wrist for "gloved" hands. 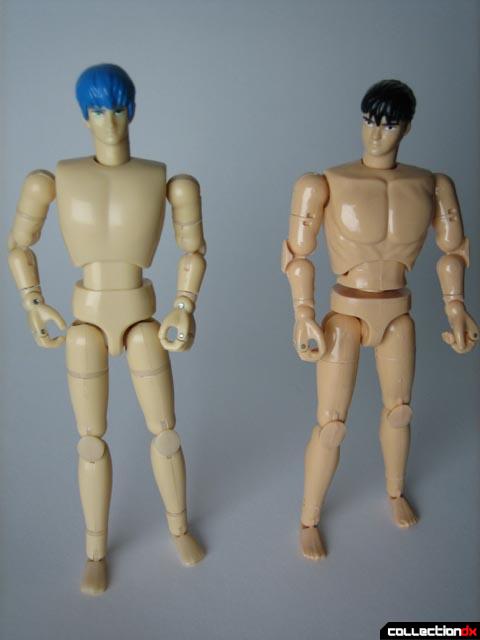 Side to side: On the left is the Yutaka SZ type body, On the right is the original 1980's Hyper Boxer Bandai Spiral Zone Figure.

I'm split on this one. I'm just glad I didn't pay $40.00 for it because it's just not a $40.00 quality figure. I wish Yutaka had manufactured the Chirico's equipment differently, with snap on belts and equipment. As is it's a huge design let down. But At $9.99 buying another and gluing the parts on wouldn't be a great loss.

On the positive it's great to see somebody finally revive the line. Chirico Cuvie was a great subject to manufacture. Yamato has released an amazing Chirico figure in the same scale for their Scopedog figure but I really love the Spiral zone charm the Yutaka figure has. It is also a great way to get parts for a broken or missing Bandai SZ figure or use the figure for one of the four Bandai SZ uniform sets that were manufactured in the 1980's. It has been more that a few years since they released any new Yutaka SZ figures but I hope Yutaka continues the line.