When I made the decision to buy my 4 yokai monsters, it was based largely on the belief that Kara-Kasa was the coolest and most desirable of the set. I mean, if he wasn't included, I likely wouldn't have bit. But later, I really came to appreciate the appeal of Abura Sumashi ( 油すまし). This character was the wise leader of the yokai in their battle against the evil Daimon in the film "Yokai Dai-Senso" from 1968. If yokai were Jedi, this guy would be Yoda. 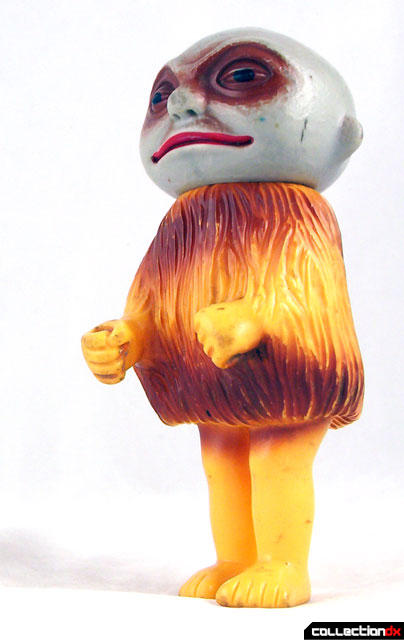 Standing 6.5" tall, this toy features just one single point of articulation, with the head being able to turn. That's it. No other action features. But it's the sculpt of that head that is the real appeal. Pointed at the top with outstretched ears on the sides, the head of Abura Sumashi appears made out of stone and had numerous subtle bumps and ridges that are best appreciated in person. The sly, mischievous grin belies the serene look of wisdom set into the large, dark eyes. It's quite unlike any other Japanese toy I have, most of which are either ferocious monsters or inanimate robots. 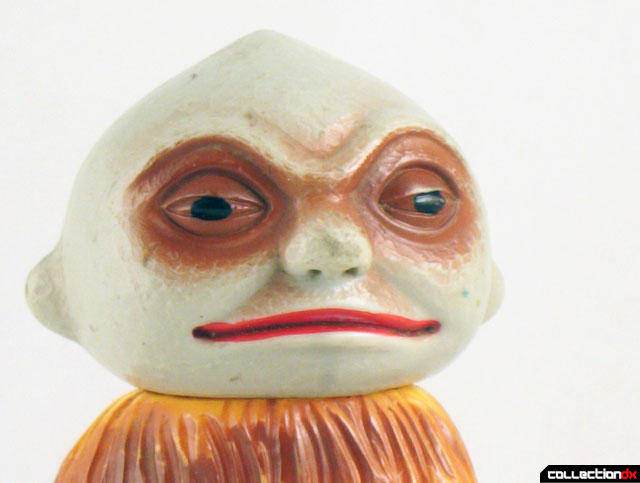 A long coat made out of straw (or vinyl depicting straw, of course) covers the rest of his body, down to the bare legs. Abura Sumashi wears no shoes. The character is known to carry a staff, but the toy did not come with one. There are indentations in the hands (not holes, mind you, just indentations) but I do not believe that the toy ever came with any accessories, even though the shopkeeper I bought it from pointed there and said, in broken English, "missing part". Regardless, no specimen I've ever seen had anything in the hands so if I am missing a part, I'm certainly not alone in that regard.

Between the stony head and the straw coat, this toy is the most "Earthy" toy I have, which really sets it apart from the rest of my vinyl collection. Although the character is supernatural in essence, it seems far more natural when placed next to space creatures and nuclear mutated giant monsters. 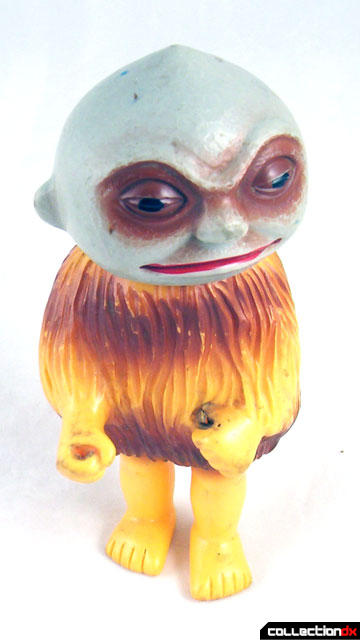 If you are interested in learning more about traditional Yokai monsters, be sure to check out the upcoming book Yokai Attack! The Japanese Monster Survival Guide. It's available this month in Japan and later this year in both the US and the UK. The book is written by good friend Matt Alt (of ToyboxDX fame) and his wife Hiroko Yoda, both stars of the "Great Yokai War". 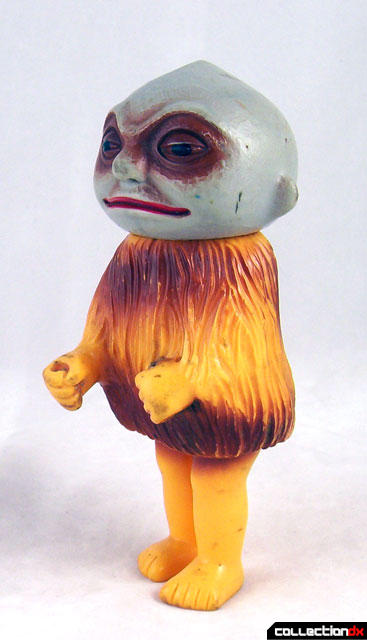 He's, by far, my favorite yokai...though I'd probably compare him more to Obi Wan Kenobi than Yoda! ;)

Fair enough. It's been awhile since I watched the movies and actually I think I've only seen one of them. In fact, I was hoping to borrow them from you for a refresher before doing these reviews, but obviously that didn't happen.

Mr. Clean, wearing a vest of human hair, having an allergy attack!

Great review! I always thought he was one of the strangest looking Yokai. According to the Meiji era Folklorist and Anthropologist Yanagita Kunio the name means "oil presser" or "oil wringer" and he appeared once on the island of Amakusa. The legend states that a grandmother and her child were walking on a mountain pass and while the grandmother was telling her grandchild about the Oil Presser he appeared to reassure them that he still made appearances. There is also speculation that Abura Sumashi may be the embodiment of a person who stole oil, which in those days was extremely valuable, and was cursed to remain a Yokai after death.
Apparently the look was invented by Shigeru Mizuki and it stuck, which is fine by me. I love Mizuki's impressions of Yokai.