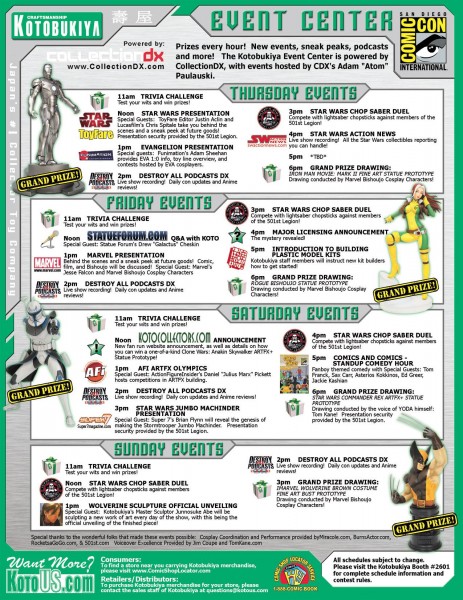 So before thoughts of Summer slip away and SDCC09 is nothing but a distant memory I did have a few more stories to share with our readers about my trip out to the west coast. We had initially shot down the idea of going out to SDCC09 to cover it for the site. The money spent to go and cover it when so many other media outlets are doing the same just wasn't the best use of our time and money. Everyone agreed it was probably best this year to skip it, and that was that.

Then, the very next day the CDX hotline rang...

Welcome to the Kotobukiya Event Center powered by CollectionDX.

We got a call from our friends over at Kotobukiya the very next day asking if we would be interested in working with them to host a series of events in their booth during San Diego Comic-Con 2009. This was a chance to promote the site and partner with a manufacturer we really like and respect in a high-profile way.

Kotobukiya's booth was literally smack-dab in the middle of the entire convention center, direct opposite a main entrance and surrounded by the likes of Lucasfilm, Diamond Comics and Marvel. I was not only juggling a three ring circus in our booth, I was surrounded by 200 three-ring circuses. Even seeing that on paper would not prepare me for what lay in store...

I arrived Wednesday afternoon in San Diego with a pretty packed schedule, hosting events every hour on the hour on Thursday, Friday, Saturday and Sunday. Preview Night was that Wednesday evening and would be my only real free chance to check out the floor and it was so packed it made it pretty impossible to get to much. But I did squeeze in some stuff here and there over the next few days (Tron Legacy Press Conference, Tamashii Nation as well as meeting some childhood heroes and totally rad guys.) That's not to say my time at the Koto booth would be “work”, quite frankly it was anything but.

We started everyday on stage of the “Kotobukia Event Center” with the Trivia Challenge. I would randomly pick 2 people out of the crowd and give them a random trivia question based on a license Kotobukiya made product for (i.e Star Wars, Marvel, Indiana Jones, Neon Genesis ect. Ect.). Winners walked away with great prizes.

These where a lot of fun and the crowds got bigger every day as the con went on.

Speaking of crowds, another daily event that got folks buzzing was the Star Wars Chop Saber Duels. Yep you read that correctly.

You would compete against members of the 501st using lightsaber styled chopsticks. The object of the game was to move items of all sizes from one bowl into the other using only these chopsticks. Did I mention you where competing against fully outfitted members of the Empire?

Kudos to the many individual's of the 501st that volunteered their time to come up on stage and play the bad guys in our little game. They are bunch of great folks who do some fantastic work for charities and promotional events and have personally provided me with numerous and fantastic photo opportunities over the years.

Young and old alike frantically threw their hands up in the air hopping to get picked for the next round. What impressed me the most was how dexterous the 501 folks where in their costumes. It was a lot of fun and I am sure Kotobukiya will sell many of the lightsaber-styled chop sticks (Due in time for the holidays.)

Numerous presentations where given with Lucas Licensing, Super 7, Marvel, Funimation as well as podcasts by our very own Destroy All Podcasts DX and the stand up comic styling of Tom Franck and his Comics and Comics crew.

At the end of each day we gave away a one-of-a-kind artist proof of a production piece. Not to mention the thousands of dollars of finished product given away daily...

To help with the fun Kotobukiya enlisted the aid of several talented cos-players to help giveaway the prizes and unveil the latest Bushijo girl statues in their marvel ArtFX line.

Over the course of the few days we had several different folks by in costume to help out but Miracole (Phoenix, Rogue and Black Widow) and Chris Burns (Cyclops and Tony Stark) both jumped in on several occasions,were fun, the consummate professionals and had excellent custom-made costumes. Nothing draws in a crowd like an attractive and stunningly costumed woman screaming at the top of her lungs, “Cute chick giving away free stuff!”

While all this craziness is going on in the booth, Kotobukiya flew in their very own Master Sculptor, Junnosuke Abe to sculpt from scratch a brand new Wolverine piece.

Crowds where constantly forming to watch as he started with a wire-frame and over the course of four days turned it into a very striking looking Wolverine.

It does beg the question though. If they can turn a fantastic piece in such short time, why does it take so long for finished product to hit the market?

The pictures here really can't tell the whole story. Nothing anyone tells you, will prepare you for the insanity that is Comic-Con. While in the booth in-between events you just never knew who you would end up talking with. I had a chance to tell Seth Green what big fans we here at CDX are of his Robot Chicken and I even had James Arnold Taylor (the voice of Obi-Wan from the animated Clone Wars series) stop and chat me up.

I want to thank Kotobukiya and Frank Supiot for having me there as it was more fun than I could have anticipated that afforded me more than a few amazing “geek” moments. Special thanks goes to Shingo Nakagawa (pictured below)for letting me use some of his photos to finish up this article.

Thank you Frank, it was an amazing time and I genuinely appreciated the once-in-a-lifetime opportunity. It was more fun than I can put into words. Thank you man.