Xerxes is a repaint of Perfect Effect Leonidas with new weapons. Along with the new paint job and weapons, Perfect Effect has incorporated several fixes to the original figure, namely more robust joints. Xerxes comes packed in very large medium-weight cardboard box with several clam shell inserts that hold the figure and all his accessories. 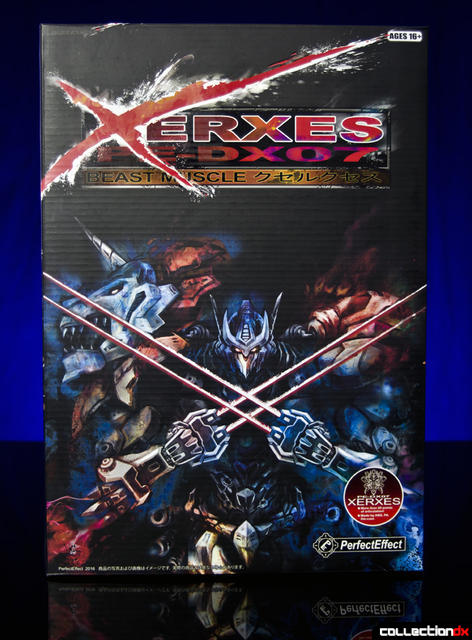 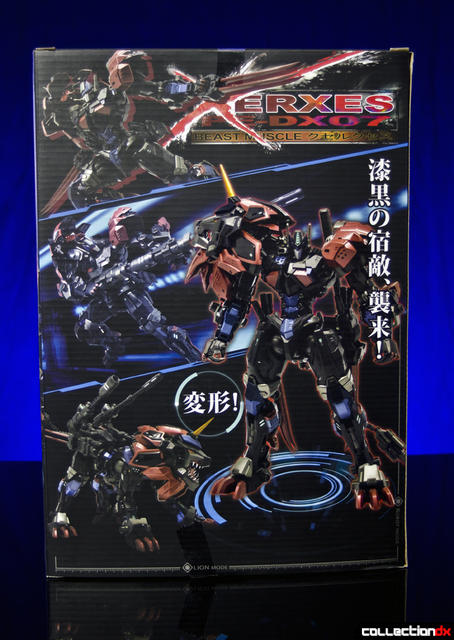 Xerxes stands roughly 8 1/2 inches tall and comes with 5 weapons; 2 diecast dual blades, a medium sized cannon, a large cannon, and two daggers that make up the tip of his tail. All of Xerxes weapons can be mounted to the rack on his back. The two cannons can be combined into a larger gun. 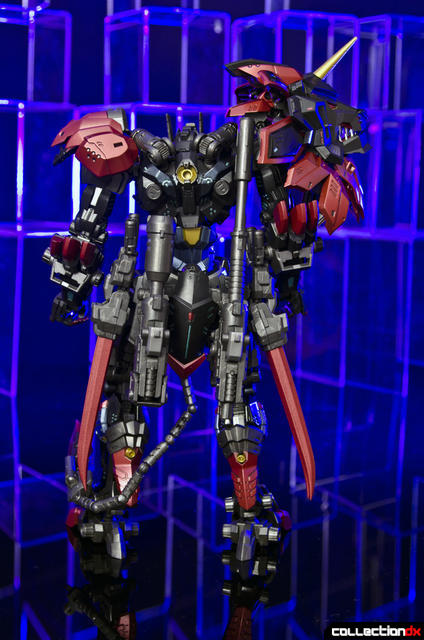 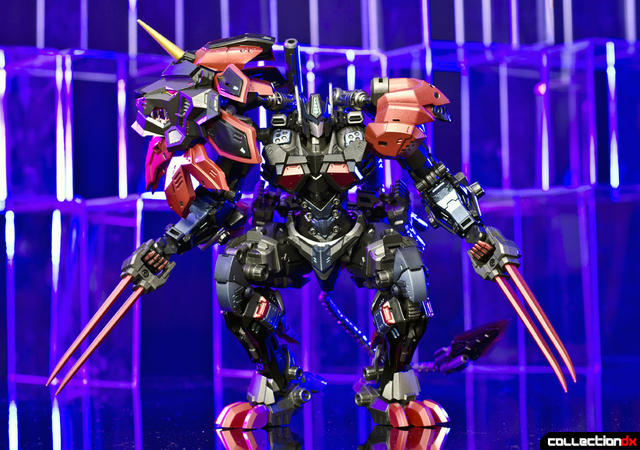 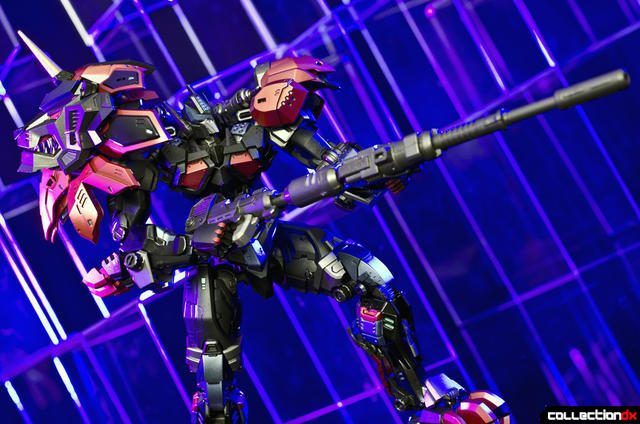 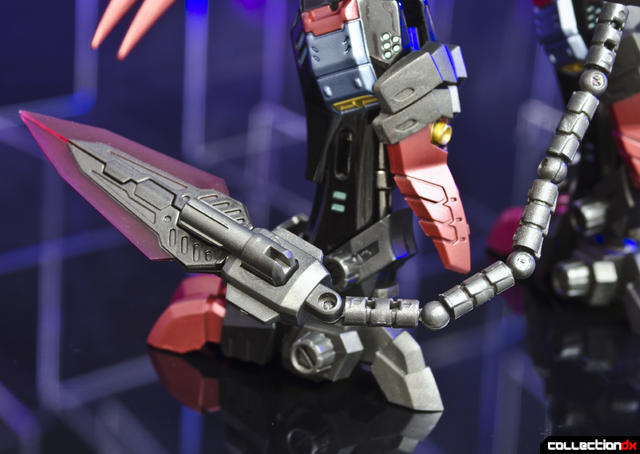 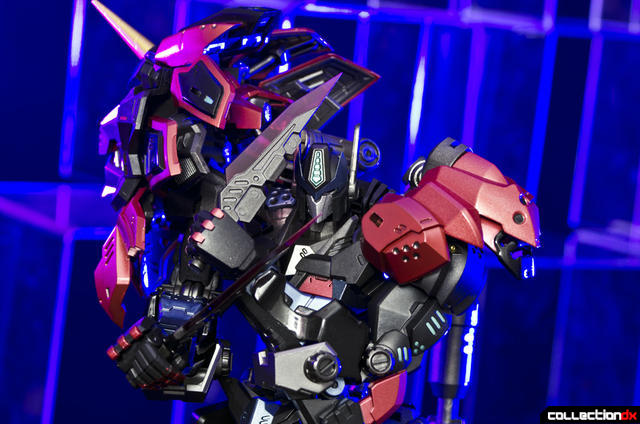 Xerxes articulation is well above average, especially in the arms and legs. 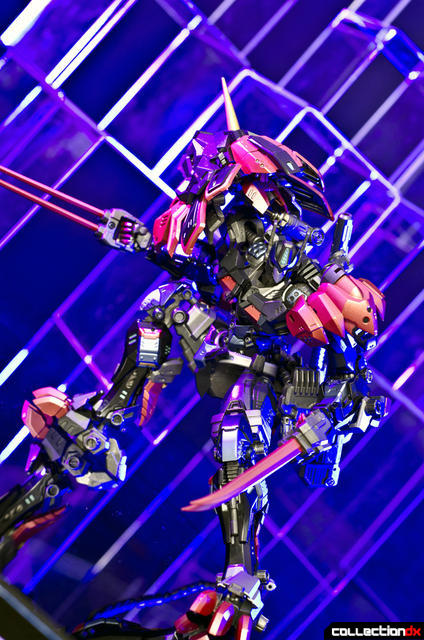 The paint is somewhat a mixed bag. For the most part, the paint is outstanding. There are a few spots where the paint could be a little sharper though. The paint on the fingers is possibly some of the worst applications I have ever seen on a figure. 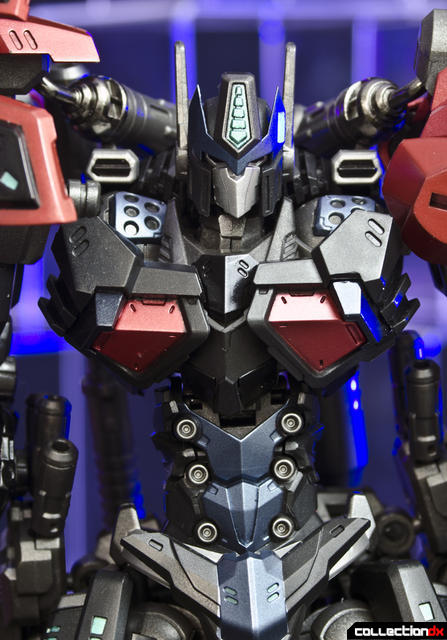 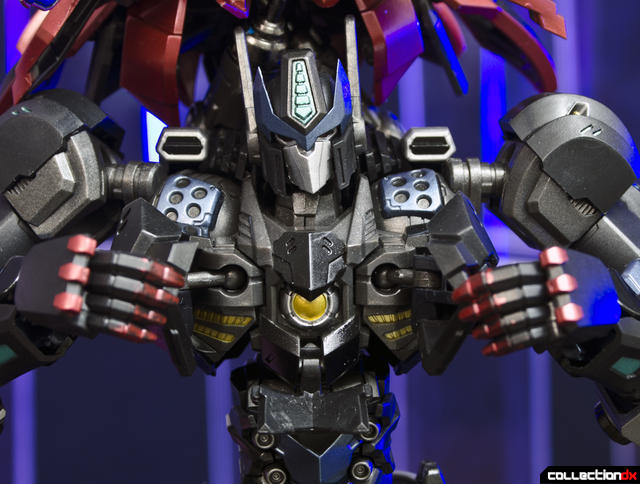 The figure has an enormous amount of diecast, all of which gives the figure excellent balance. 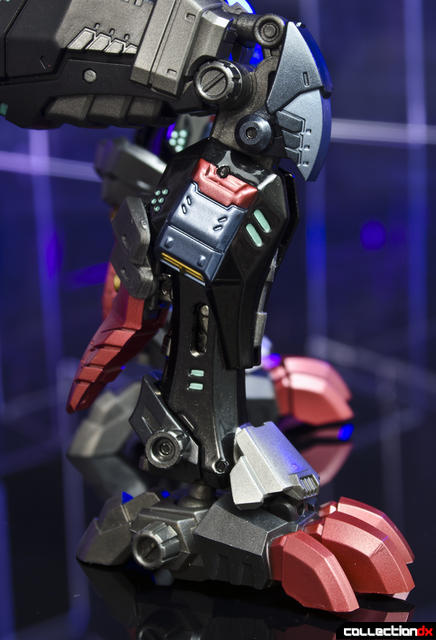 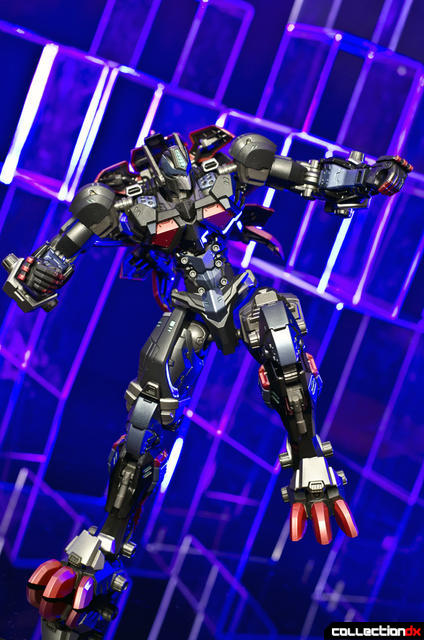 The lion head on Xerxes shoulder is excellently detailed and features a removable visor and an articulated lower jaw. It is on an articulated arm and can be moved to the figures back for more a clean look. 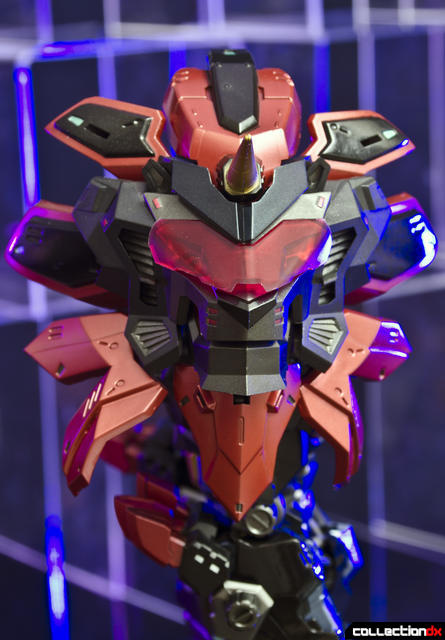 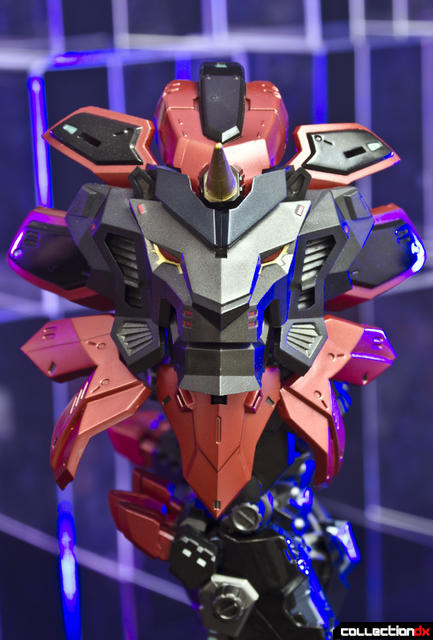 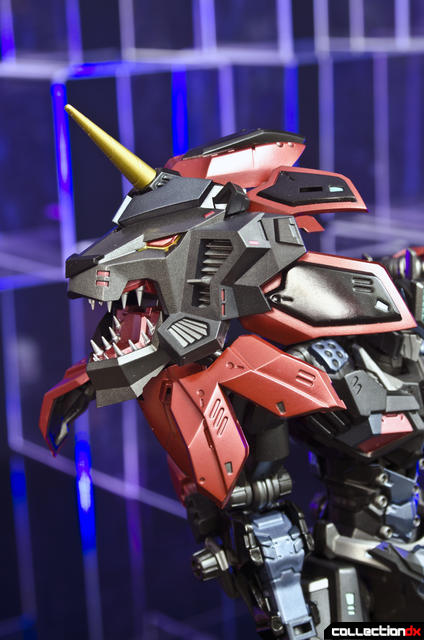 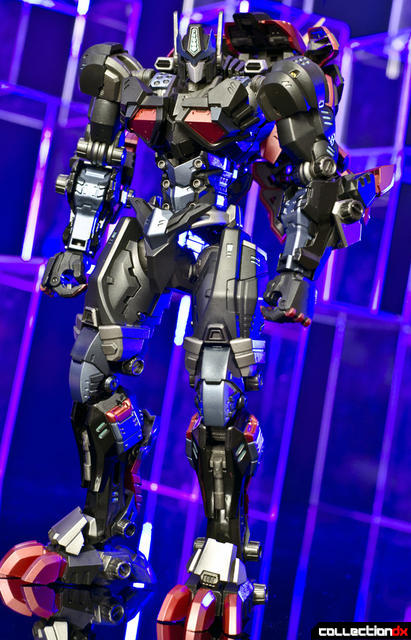 Xerxes comes with a stand thats very similar to the one that came with Warden. 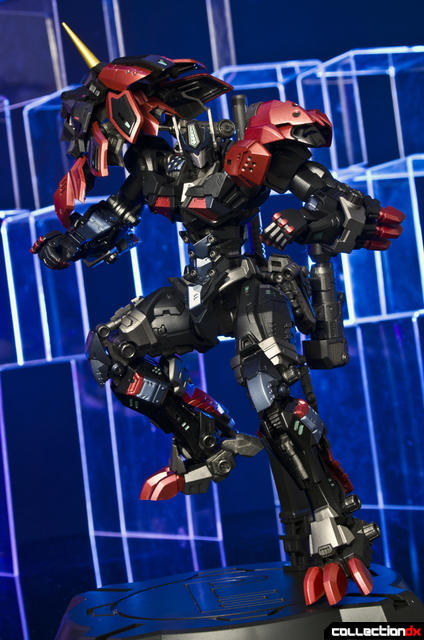 The alt mode, as you might have guessed is a Lion. It kind of looks like a cross between a few different Zoids Ligers, the Blade Liger in particular. I had a tough time getting the lion head in place, and once it is in place, it really doesn't have any range of motion. 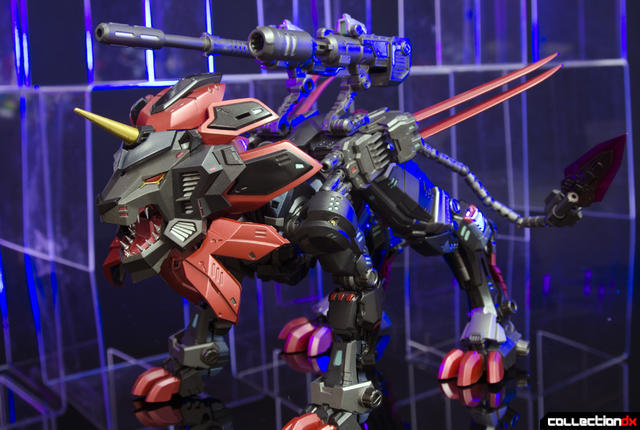 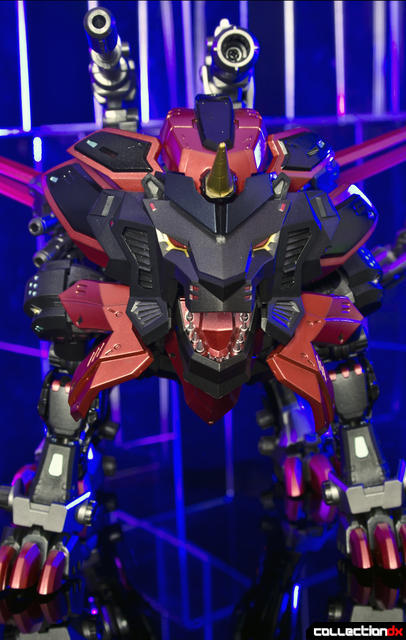 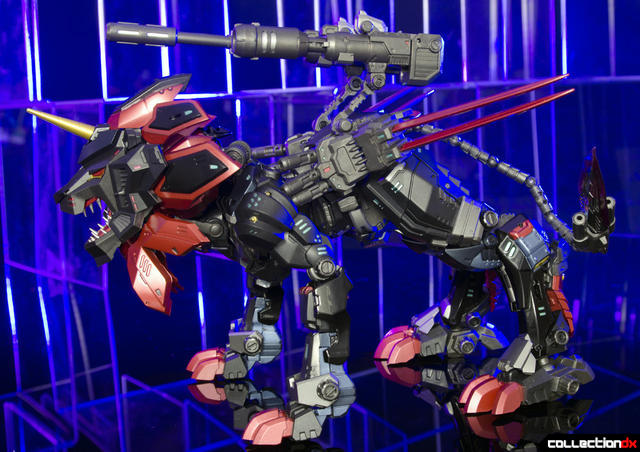 Xerxes gets a lot right. He LOOKS fantastic, and sports WAY more die-cast than most Chogokin figures. He has excellent articulation, and comes with a ton of accessories. That said, Xerxes gets a lot wrong too. He has a ton of moving parts that like to bump into each other, and come loose. For example, the hips on mine are a little loose. It doesn't hinder stability in robot mode, however it does make it very hard for him to hold a pose in lion mode without his legs slipping out from under him. The tail was a floppy mess out of the box and I had to tighten each individual joint separately. You may notice that I don't have a lot of alt mode pictures. Well, that's because Xerxes spends most of his time in alt mode like this. 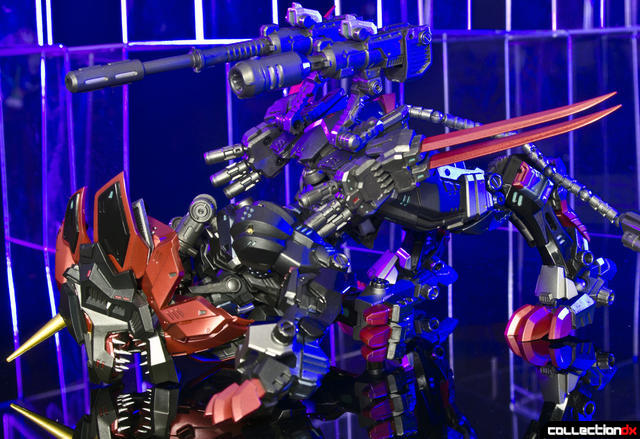 At the end of the day, I'm happy with Xerxes. He can pull off some very nice dynamic poses, and looks fantastic in my Transformers collection, which is really all I need from him. If you're the type of person that likes to transform your figures back and forth on a regular basis though, Xerxes may be more trouble than he's worth. Either way, for $150, I feel like a lot of these issues should have been worked out prior to release, especially with this being a second, and supposedly revised release. 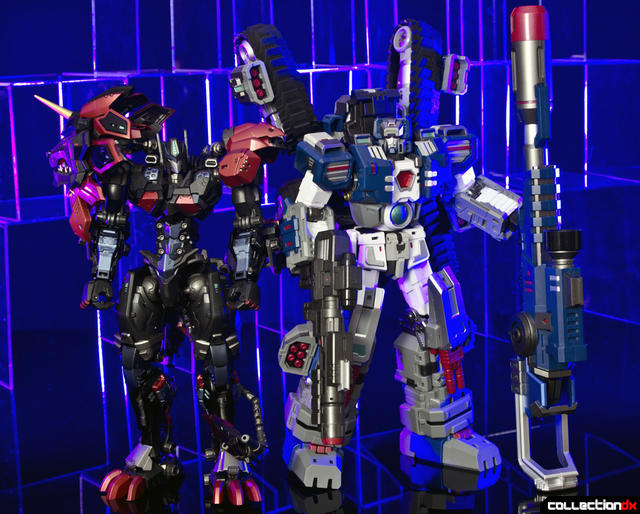 Good review! Even though he transforms into a drunken lion, he still looks cool at least. I don't think there's as much of a need for 3P post-G1, but it'll be interesting to see if Perfect Effect or anyone else continues down this path. We are getting an MP Primal this year, so who knows, maybe between the two, a fuse will be lit.

Wow I had much less issues with the first release. My tall is frighteningly tight and altmode holds of great. I do think the total design is a little bit of designer hubris it just tries to do too much. Lots of diecast, lots of weapons, lots of articulation.....

I'm more interested with Leonidas' colour scheme rather than Xerxes but reading some issue with him, I prefer to stay away for now. For Xerxes, I did saw a promo pic saying PE already fixed/strengthen the joint with Xerxes. Is that true? If it is, I might just take the dip with Xerxes then.
Nice review btw! I really love your background setup

Thanks for the review! Looks like a cool piece.

Please don't take this the wrong way, but the background is way too busy. You have taken great pictures but the details and colors are hard to see with such a distracting background. I think the pics would be top notch if you used a more neutral background.