While commanding officer of the Neptune, Capt. Ace Speedman puts on a gruff attitude that makes him seem rather unfriendly. Plus there’s the whole eye-patch thing, but no one dares ask if it’s real or not. At heart he’s an adventurous spirit who has successfully found many treasures across the world’s oceans. Because of this, many cannot quite understand why Ace would take out the Wreck Raider, as it is so small. However, Ace loves how it flies through the water, can make tight turns, and can reach places that lager submersibles like the Typhoon Turbo Sub and Seabed Scavenger can’t reach. The dual grappling hooks can reach quite a ways as well, allowing the rugged twin impeller engines on the motorcycle-like Wreak Raider to drag heavy treasures back to the Neptune. 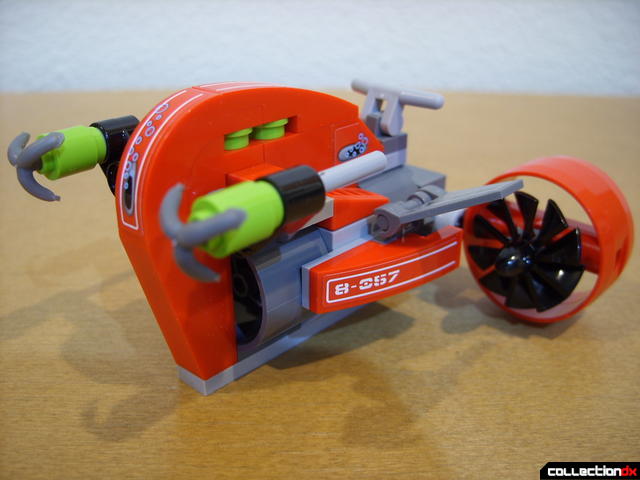 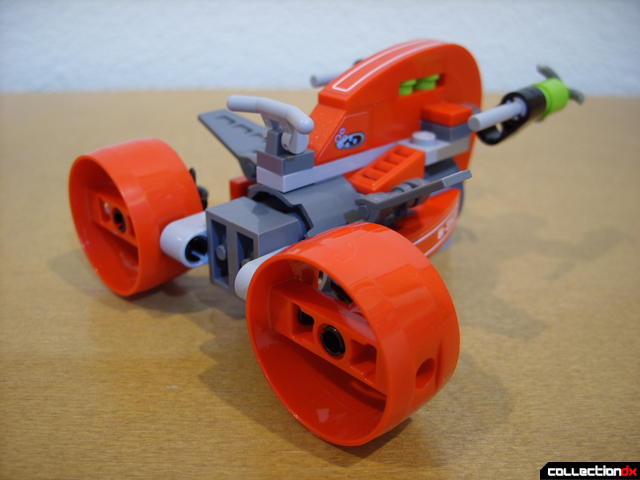 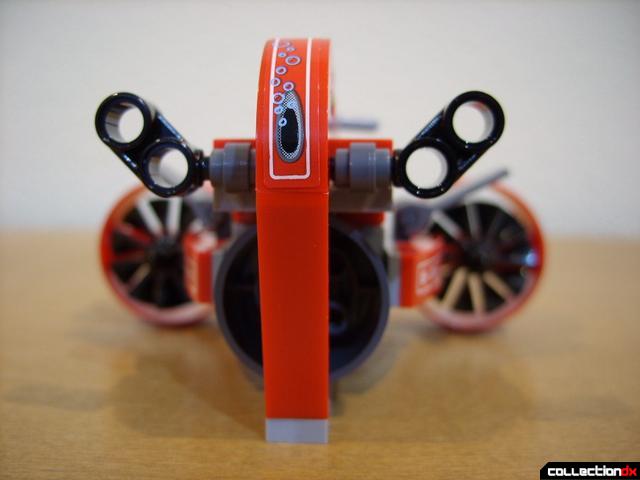 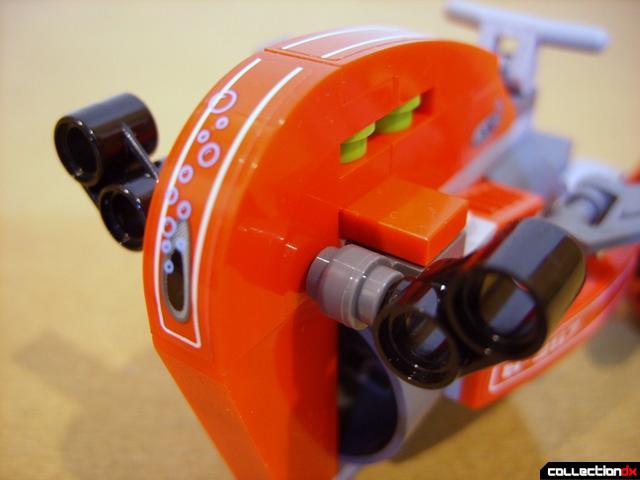 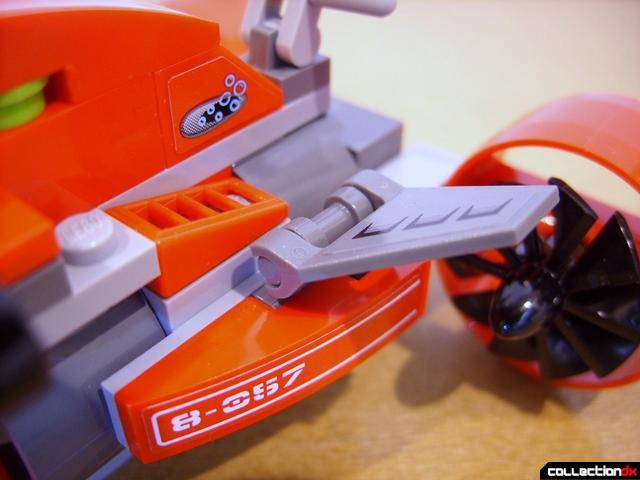 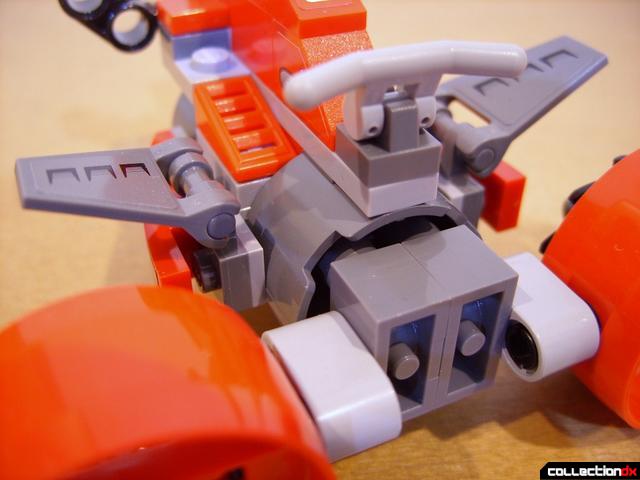 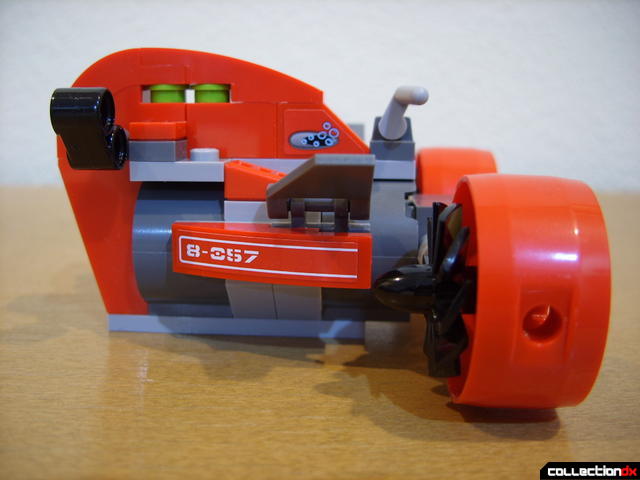 Each impeller [a propeller that is located inside of a structure for protection, rather than outside of it] can spin freely, as can the housing they are attached to. The small fins can also pivot up-and-down because of the parts used, though they are meant to remain slightly diagonal. 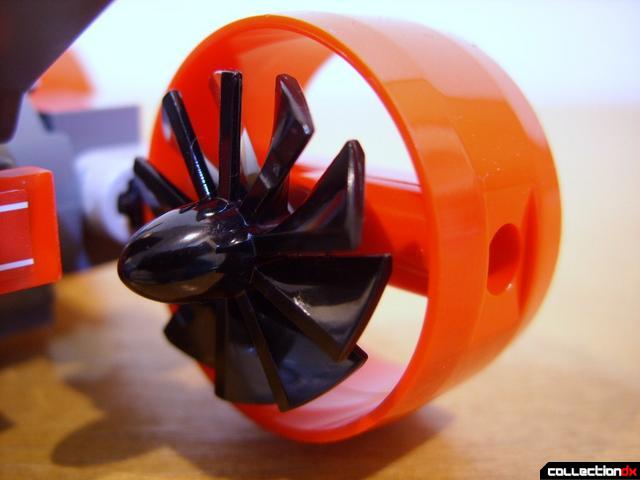 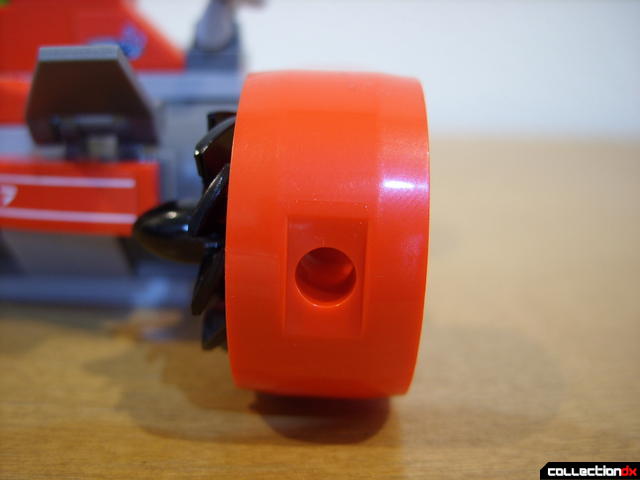 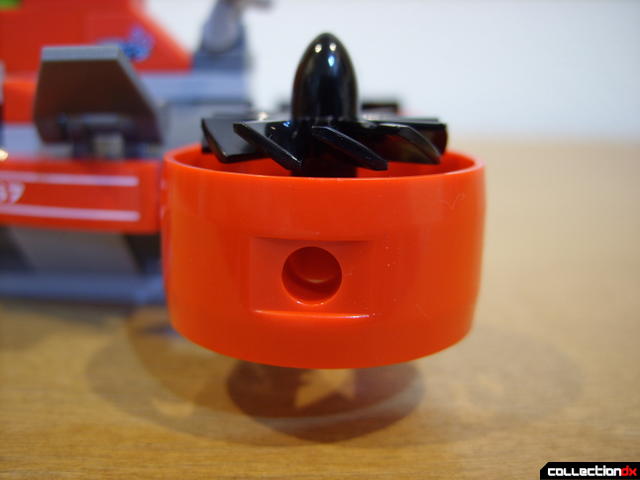 Each grappling hook is attached to a flick-fire missile. Though not intended to, the launchers themselves can also be angled up and down. 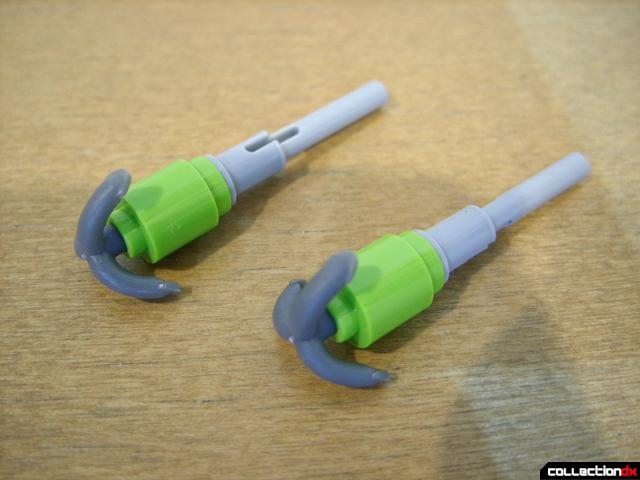 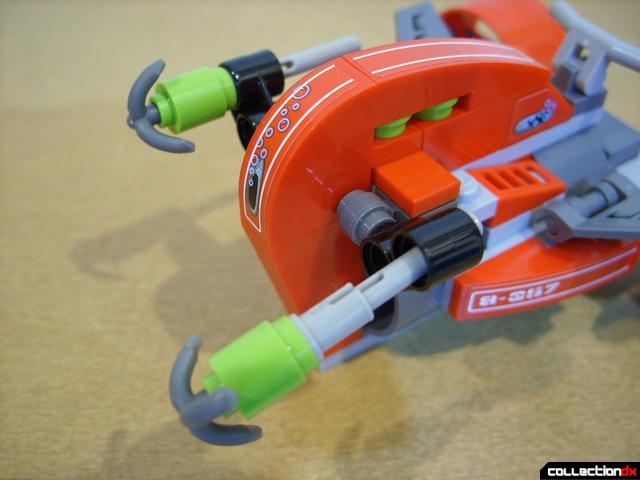 Lego Set #8057 comes with the first version of the Captain Ace Speedman minifig, in a deep-sea diving suit. 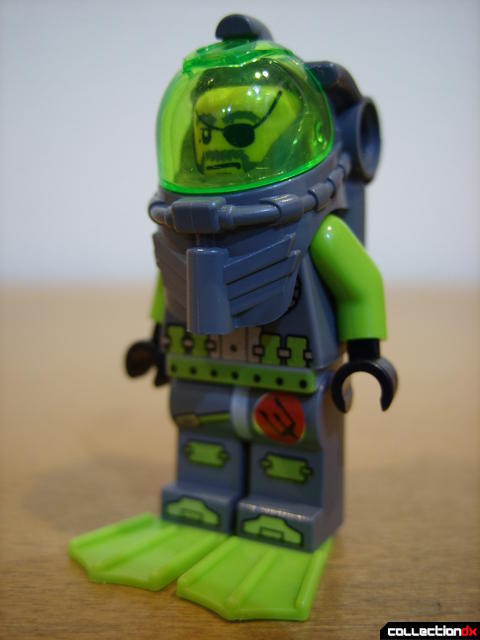 The headdress and canopy are new designs to the Lego System, even though other underwater headdresses have been made before. The canopy can be removed, but it cannot move up or down. Unfortunately, a gray hairpiece for Ace is not provided in this set. This set does not come with any accessories for the human minifig to hold. A single Shark Warrior comes in this set, and he has a PVC trident as his weapon. 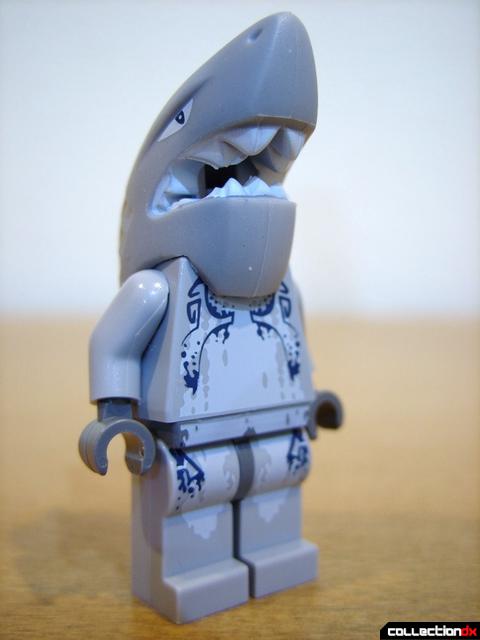 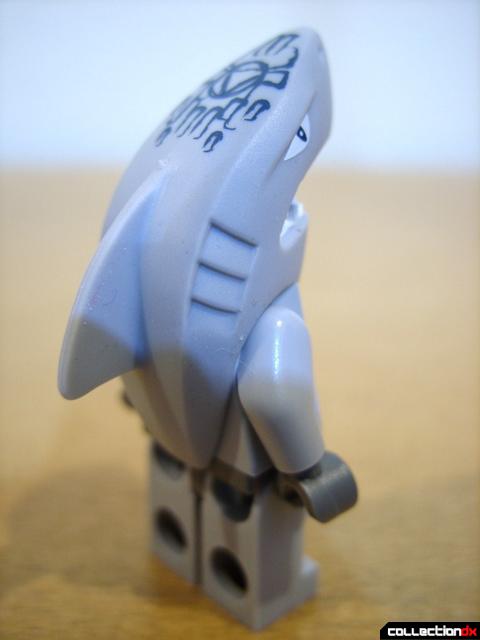 The shark headdress is an updated/alternate version from the one which debuted in 4762 - Rescue from the Merpeople in 2005’s "Harry Potter and the Goblet of Fire" line (where magician-student Viktor Krum accidentally half-transformed himself into a shark). This new design incorporates a non-flexible PVC and painted/printed-on details.

The common collecting gimmick in the “Atlantis” line is unique crystal Keys that are used to unlock Professor Rhodes’ Pyramid Map. Each one is color-coded, and features one of the giant animals that guard the path to Atlantis. Lego Set #8057 comes with the blue Squid Key, which features the giant squid (aka the Kraken). The squid itself is actually featured in Set #8061 - Gateway of the Squid, which also has the same key from this set. 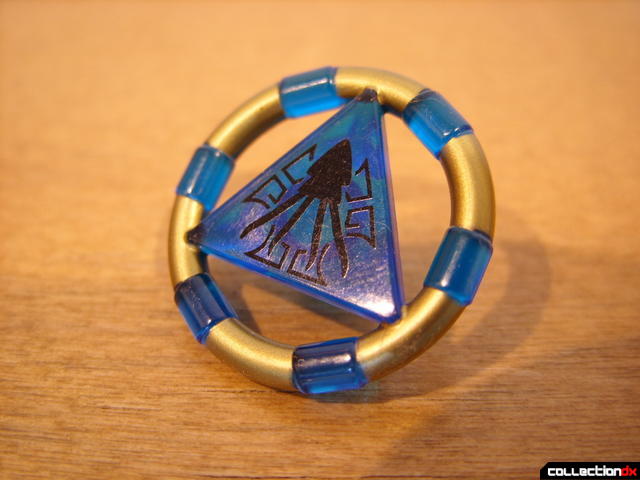 A growing feature in toys by different manufacturers is the ability for a product to interact with a webcam. LEGO “Atlantis” rides this wave with Augmented Reality (AR). When you go to the AR webpage, you can select a favorite set from the line-up. The instructions tell you to print out a unique icon on a sheet of paper. Then, when you hold the sheet up to your webcam, the set that you selected comes to life on your monitor! (Regretfully, I do not have a webcam at this time, so I cannot demonstrate this feature…)

Additionally in specially marked LEGO “Atlantis” sets are a pair of glasses with blue and red lenses. On the homepage, there is an option to ‘go 3D’. When you select the icon, the entire site will then be displayed so that when you wear your glasses, it all becomes 3D: product descriptions, images, and even movies! If you do not have glasses from one of the providing sets, you can call LEGO Customer Services at 1-800-835-4386 (North America) or 00800-5346-5555 (Europe) and purchase a pair directly!

Soooo... another underwater adventure theme, eh? “Atlantis” marks the fifth time that LEGO has created a dedicated underwater series, with the previous ones being: “Aquazone” (1995-98), City “Divers” (1997-98), “Alpha Team: Mission Deep Sea” (2002), and “Aqua Raiders” (2007-08). I’ve always felt there was great potential in an underwater theme similar to that of the legendary Space saga, but most of the sets were never really appealing to me. I continue to stand by my opinion that the smallest LEGO sets often have the most playability (by default leaving little room for error that the larger sets can and do have), and summarize each theme that they are a part of. They’re a good place to start collecting a line as they don’t cost much, and are easy to assemble. There is a definite emphasis on speed with the selection of curved pieces, and the model’s narrow forward profile. Indeed, the upper curved surface seems to mirror that of the 8075 - Neptune Carrier. The new screw piece is a nice, more practical design than previous propellers, and having the impeller housings pitch around is also great. One little detail I liked is on select decals that imply a vent or hole, there are bubbles coming out of it, and the LEGO set’s I.D. number (8057) is cryptically used as the vehicle model number on the sides as a mild in-joke. The new diver’s headdress is also sufficiently tech-ey and deep sea diver-ish (along with, thankfully!, a visor that does not open). I only wish one-eyed Ace could have been provided a gray hairpiece to match his appearance in the videos on the homepage (though I suspect this may be the norm for the other “Atlantis” diver minifigs as well, including Prof. Rhodes). While the flick-fire missiles, sorry, “harpoons” are now standard in-place of spring-fired projectiles for smaller LEGO sets, I was disappointed that, with the parts used, the hooks actually slip out of place frequently whether in storage on the launchers, in your hands, in flight, or simply laying on the ground. More friction was definitely needed to correct this. As for the Shark Warrior… meh. I didn’t get the set for him, even though I like the “Tron”-like biotech tattoo markings that all the Atlantean dwellers seem to have. The Squid Key crystal is nicely detailed (in my opinion, it looks like a tambourine), though only the plastic color and printed animal/guardian change from set to set, and because it’s made of ABS I worry little about it breaking unless a significant amount of force is placed upon the ring. Overall, the Wreck Raider is a very pleasing and solid little set with few or no faults. Strongly recommended! 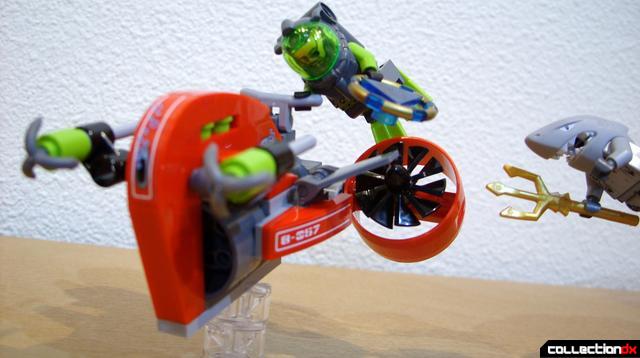 Btw 2010 Gimmick from Lego would be Atlantis and minning... thing? any news for exoforce?

Nope. "Exo-Force" is dead & buried from lack of interest.

Now, I call "shenanigans" on that because the line finally did what LEGO-maniacs have wanted for decades- merge LEGO and robots in an action genre, and it had the help of anime to give it style. I asked shortly after the line was cancelled if there was something along similar lines coming soon, and they said no.
However, the LEGO RP person thanked me for promoting the line while it was active.

That's a shame... I could use their joints parts to make some cool mecha... anyway, although the robot design is great, but the enemies mecha (at least to me) a bit let down...

The first year was the best of them all. Just giant robots and that's it. Then the second year kinda lost me, and less than half were good. The third year, through, with the animal mechs killed it for me. Besides, the third year they used a lot of ball joints for bigger mechs, which wore out faster that ratcheting ones.

This thing reminds me of the Hover Pilder for some reason, must be the movable impeller/VTOL engines deals.

Kind of a mix between the Hover Pilder and Sayaka's Scarlet Mobile. The Scarlet Pilder? maybe? no? O.k. so I'm a Mazinger fan 'whatcha' gonna do.

There's a thought, I may just buy this set and try to cobble together a Lego Hover Pilder.

Well, then- try this.