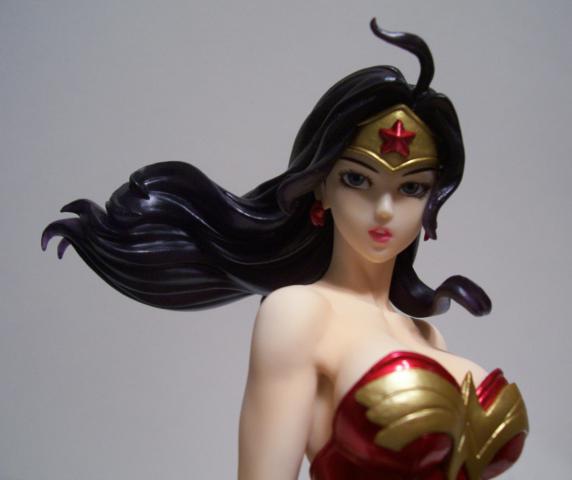 Character Background. Wonder Woman (Diana Prince aka Princess Diana) is among the most iconic and recognizable of superheroes to the public after Superman and Batman. Wonder Woman’s story is classic: an Amazonian Princess who has come to “Man’s World” as an ambassador from Themyscira, a mysterious island which is the home of the Amazons, a race of timeless women warriors. Princess Diana’s mythology is rich and has endured and changed since World War II. In her early days she faced off against more nationalistic opponents-Nazis and Axis forces. Today Wonder Woman is one of the more prominent female heroes facing off against a rich rogue’s gallery that is as much a mix of mythological menaces as typical supervillain fare. Wonder Woman and her Amazon sisters have always embraced the “peace through force” way of life and so Diana possess a number of weapons at her disposal-but the two best known (and which are shown here) include her (golden) Lasso of Truth and her arm bracelets which she uses to deflect bullets. (and of course her invisible plane which isn’t part of the figure). There have been of course, MANY versions of Wonder Woman since her first appearance in 1941. The statue has a decidedly modern (if conservative) look. The statue’s overall look was ultimately designed and sculpted by Shunya Yamashita, her pose is clearly inspired by this classic Brian Bolland cover from the 90s. 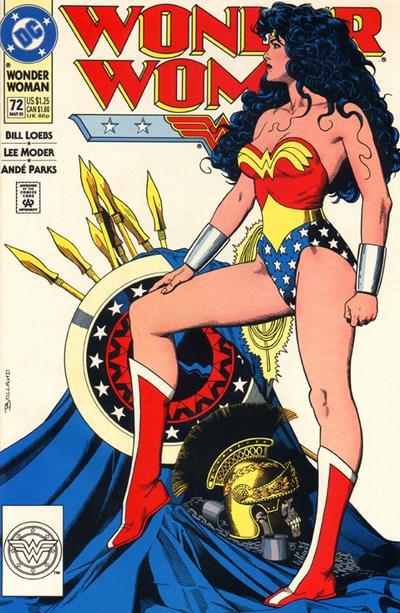 Kotobukiya has only recently begun producing DC characters for their Bishoujo (“pretty girl” ) line of statues. Wonder Woman is currently the 3rd in the series following Batgirl and Catwoman.

This figure was presented for review courtesy of Kotobukiya, USA.

Review.
Here we have the four color window box. 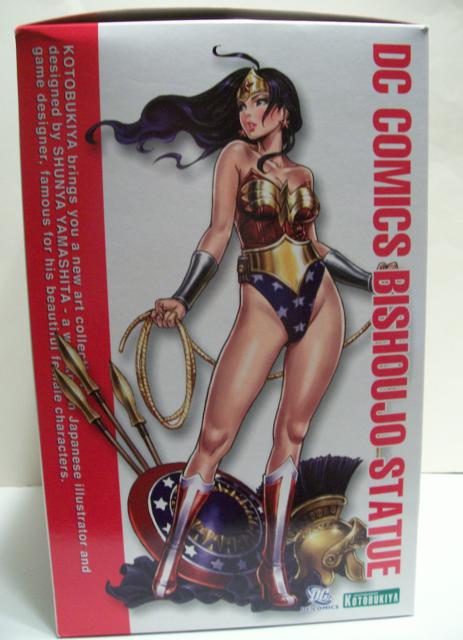 The box displays an illustration of the anime bishoujo version of Wonder Woman (abbreviated WW from here) as imagined by Yamashita. 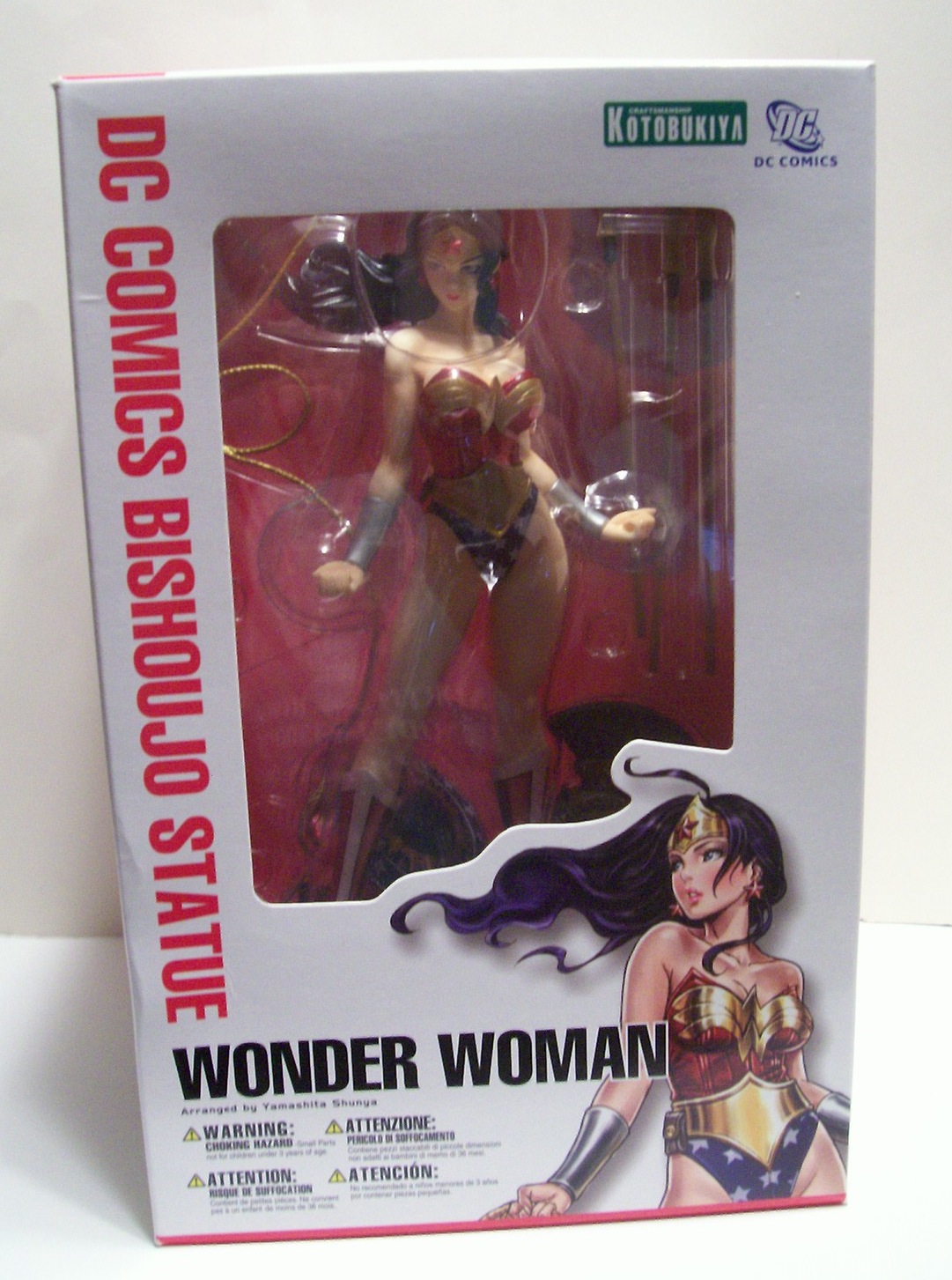 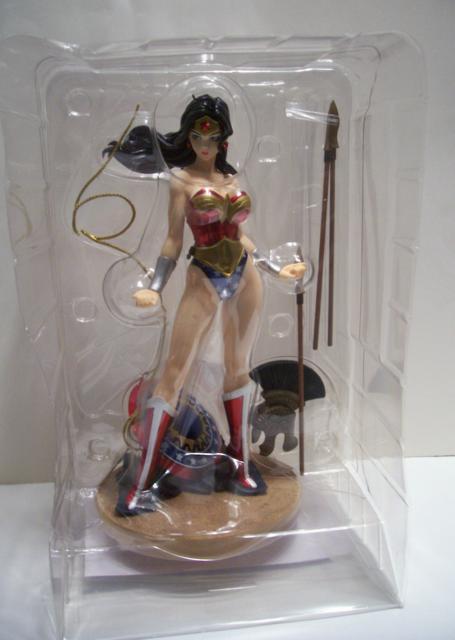 A panoply of accessories accompany the figure, most of which are for decorating the base. These include the Lasso, the helmet (which won’t fit on WW’s head) and three decorative spears. All of this is accompanied by an instruction manual which details what to do with all of the various accessories. 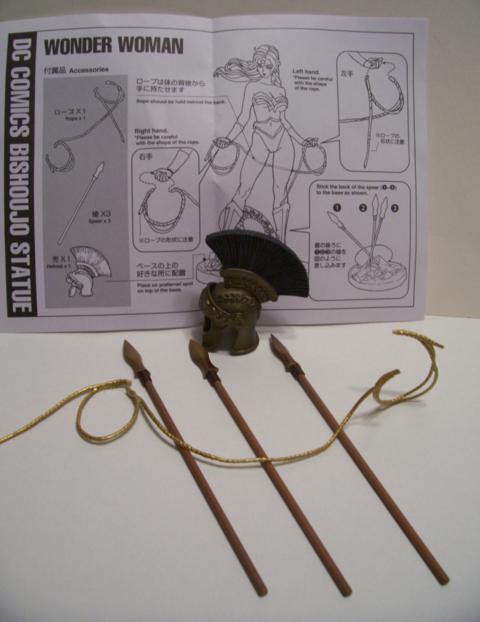 WW stands about 9 inches tall + base. This view actually shows her without the accessories. There is no posability and no cast-off. The accessories add frosting to the cake of course-but there's something very pure and enjoyable about the statue even on its own.. 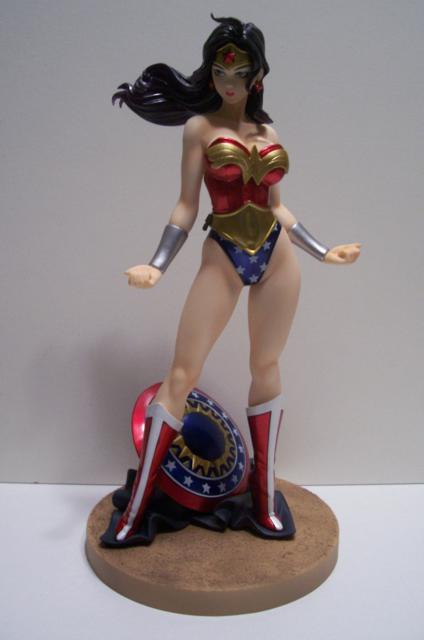 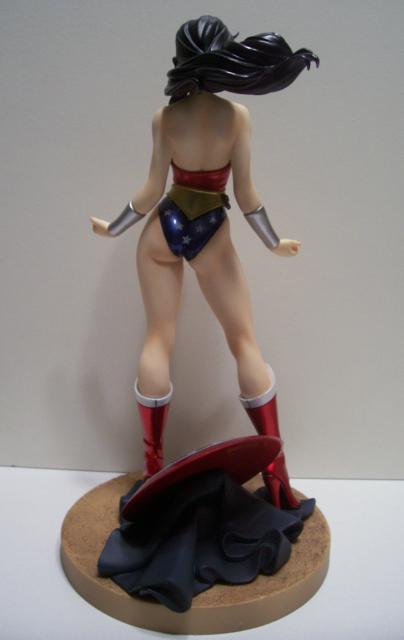 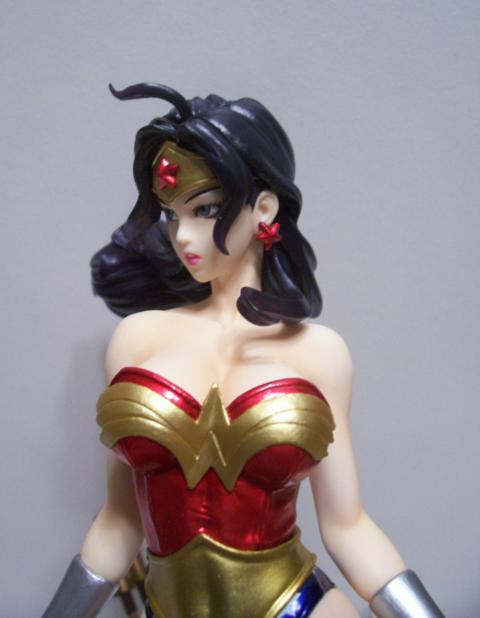 but also a good facial expression-which frankly does her more justice than that wistful, youthful look she has on the box illustration.

And here is the full statue WITH accessories. 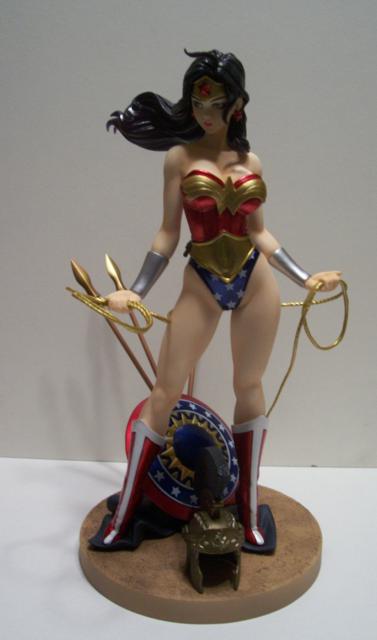 Good details up close-including a good expression for the face that is more flattering than the younger girl face on the box illustration. 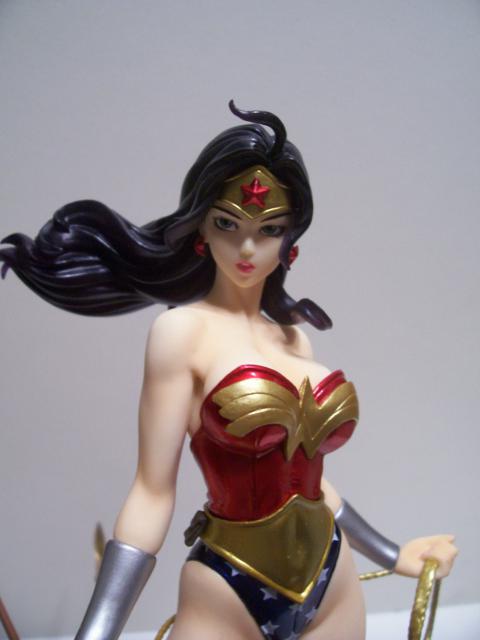 and earrings (these were not in Bolland’s original).

Excellent care has been paid to the costume 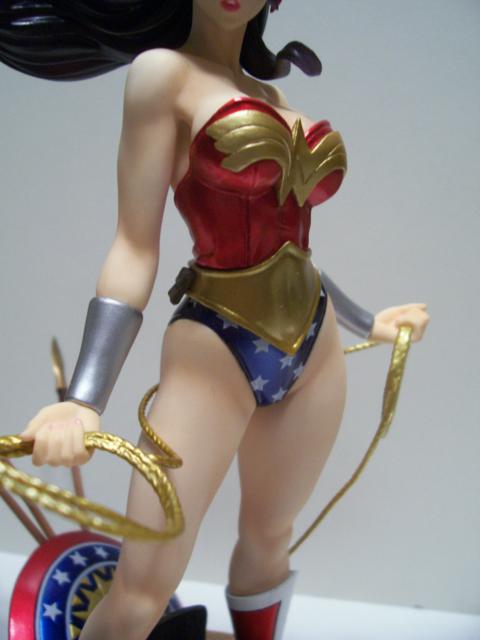 Details are rich-you can even see a small accessory pouch on her side. Probably not in the original-but ya' gotta keep your other stuff somewhere! 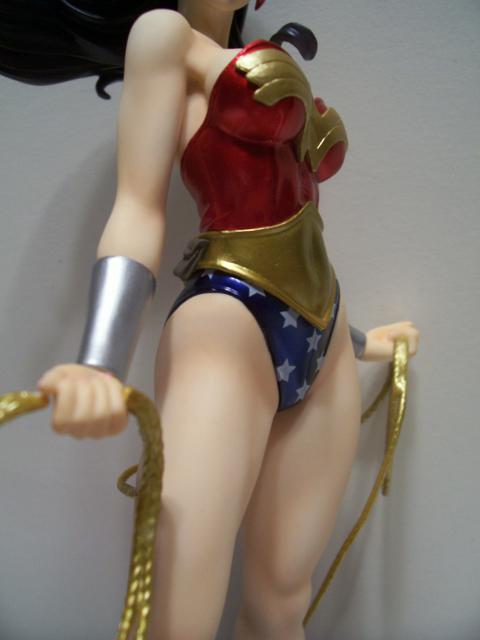 WW hair has a life all of its own. A detail that is reminiscent of Bolland’s original. 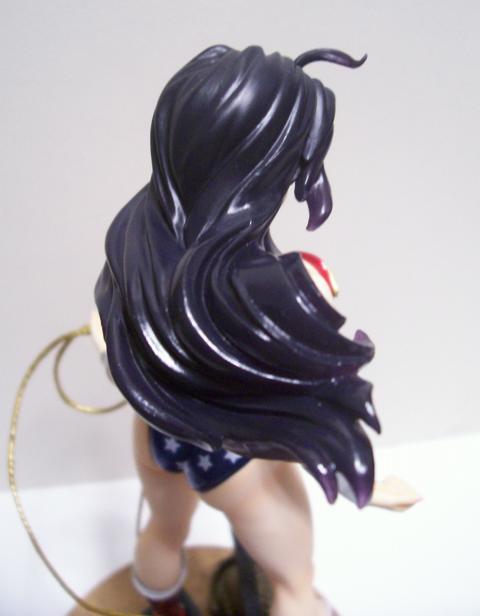 A top-down view showing a more cleavage-prone outfit than what would be seen in the comics. 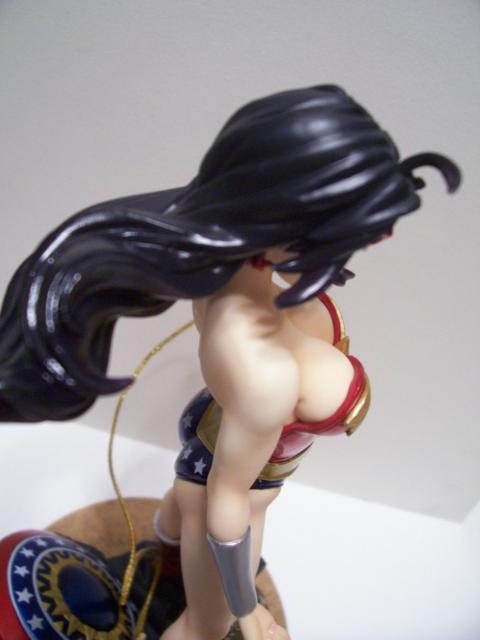 Left Side. Nice touches to her arm and physique. 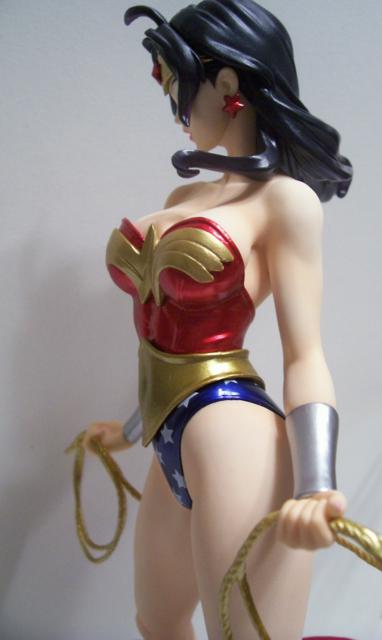 WW has a great ass sculpt (well, as nice as its going to get in star spangled spandex underpants, anyway!) 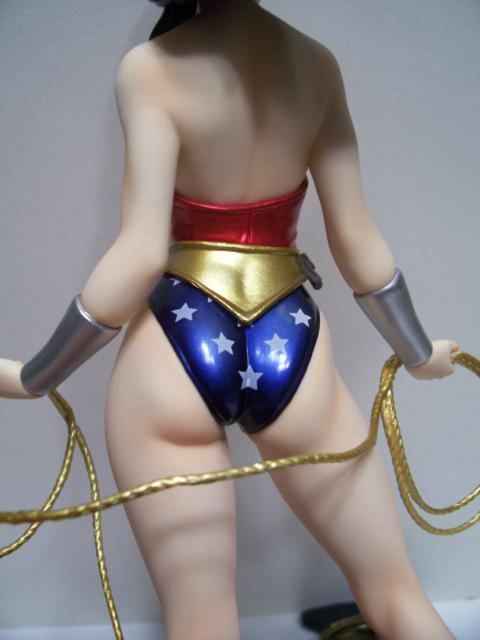 The statue has opted for WW in heels as opposed to the flat soled boots that are occasionally seen. 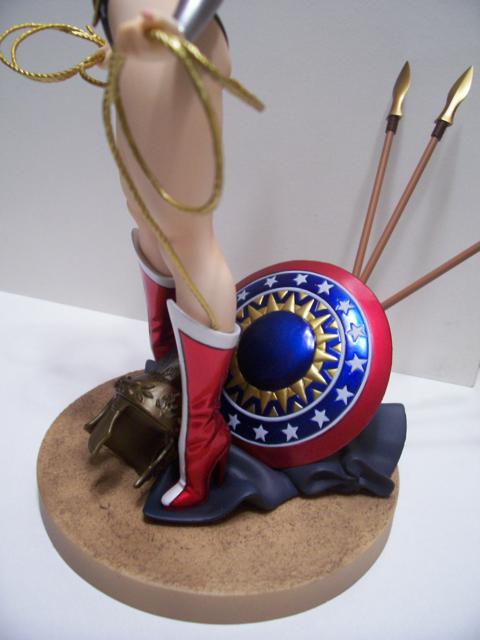 Details on the base are an outstanding! The fine details replicate Bolland’s original right down to the pattern on the shield and the Roman war helmet. 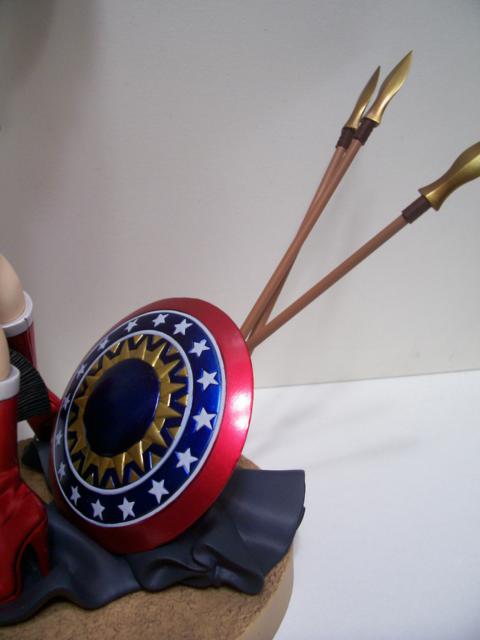 The three spears go firmly into 3 very discretely located slots on the cape behind the shield. WW’s Lasso of truth is a clever little bit of engineering. Its fibrous for the most part-but the ends are treated to fit! You know those plastic tips on your shoelaces? They are called aglets. The Lasso has AGLETS!! These fit handily into WW’s statue hands. 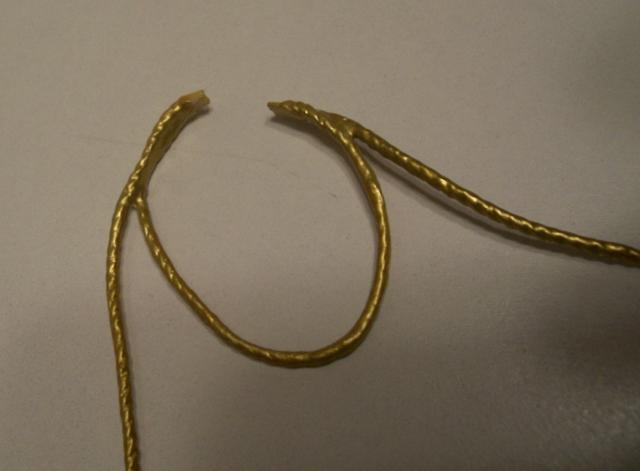 Overview. This is a GREAT statue that falls right on that line between dignified yet sexy. As indicated above, there’s a LOT of good detail and the sculpt is very loyal not only to the spirit of Wonder Woman but to the original depiction used as the basis of the statue. The WW statue is 1/7 scale and has good shelf presence. The earlier Marvel statues (e.g. Scarlet Witch, Black Widow, Rogue) were all in 1/8 scale and are just slightly smaller. I’m not certain-but I think ALL of the new Bishoujo statues are in the larger 1/7 scale (and cost a bit more as well).
As I’ve indicated before-I’ve really been enjoying Kotobukiya’s entry into the “superhero girl statue” market. They’ve done an outstanding job at all levels. From the fine details to the overall presentation with the base. This and the newer statues may cost a little more, but certainly this and the newer statues are worth it.