Sometimes I wonder if my love of crappy bootlegs goes too far.

I was in London for work last week, and my hotel was in this really Middle Eastern area of London. We're talking full burkas and Hookah parlors. Needless to say, my hopes of scoring robot toys in this neighborhood were pretty low.

As luck would have it though, I stumbled upon a discount store and found these cheap-ass bootlegs in the back with all the other crappy toys. Hell yeah I bought them. 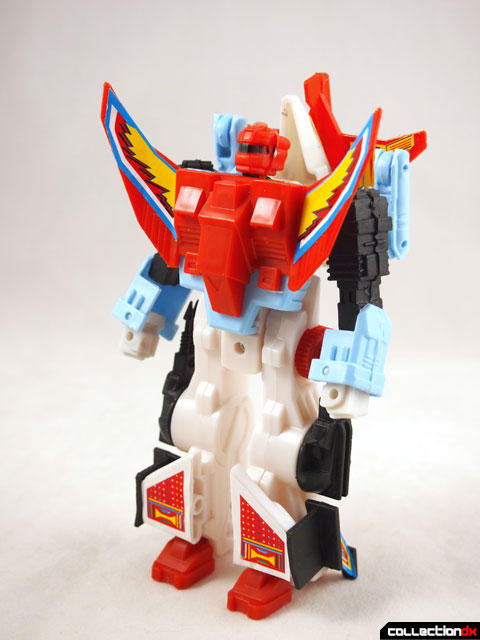 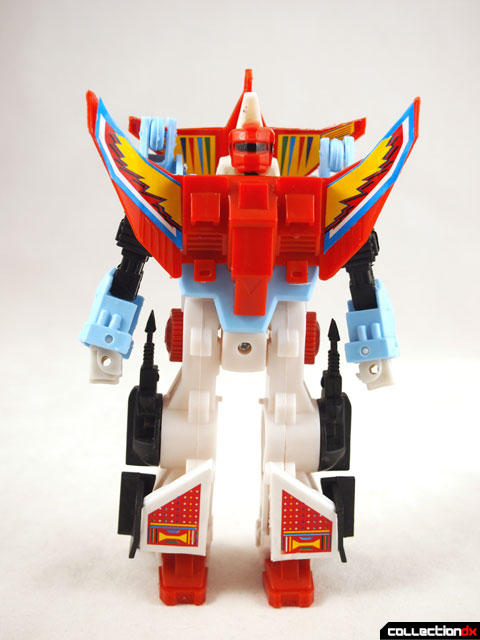 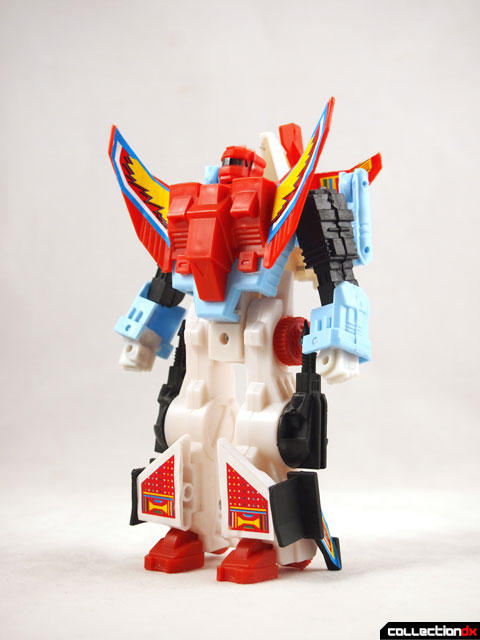 These bad boys are interesting for a few reasons. They consist of toys originally made by an obscure Japanese company called "Wing". Read VF5SS's review of some of their other products, and you can see where they made it to America. In Japan, each component was sold separately, and also in gift packs. 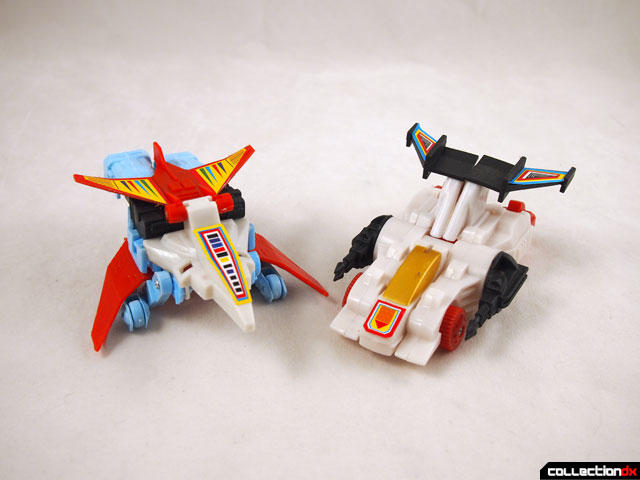 These are interesting for a few reasons:

These aren't straight knockoffs. These are OVERSIZED, by at least 50%. I've never figured out why bootleggers do this, or how it makes financial sense to completely retool a bootleg to a larger size. Do they have some kind of crazy machine that does it? It remains a mystery... 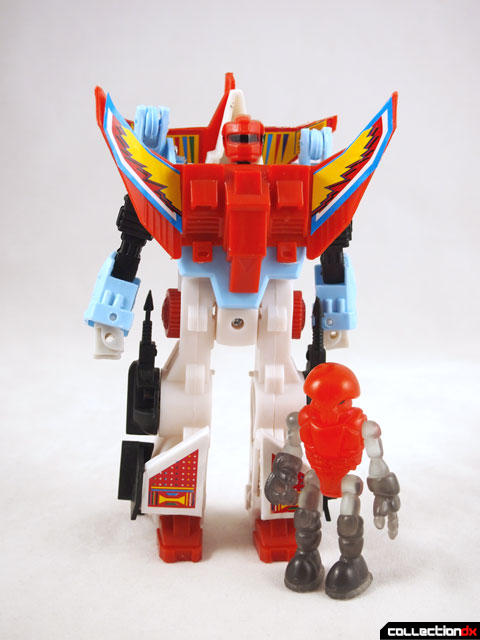 I don't think these two components were ever sold together in a pack. This is a combination of two toys - Sukaiza and Z Jeccar. If they were Japanese, the combination would be called "Super Source Kaiser." 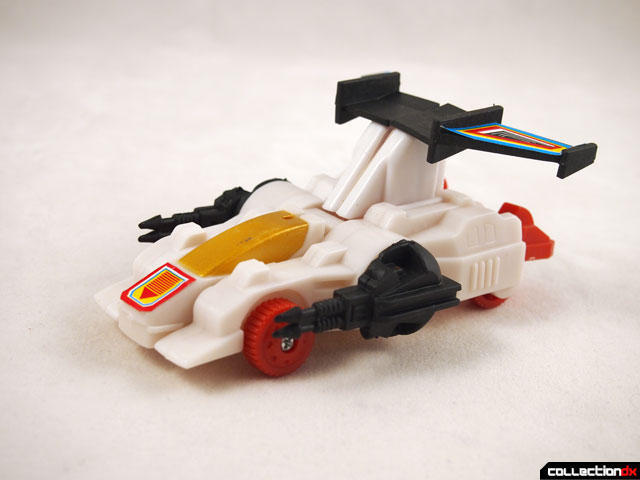 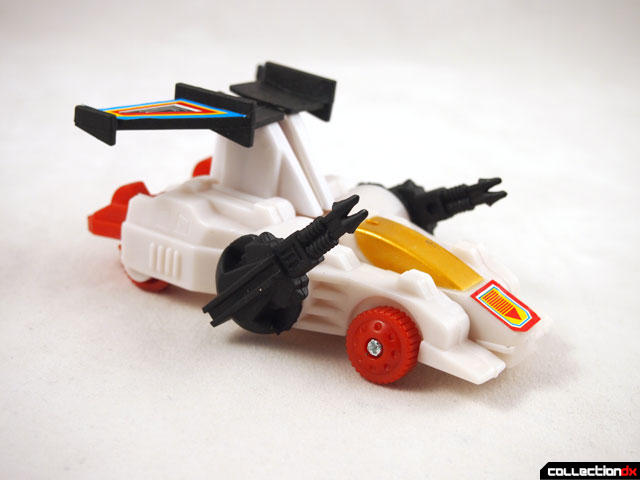 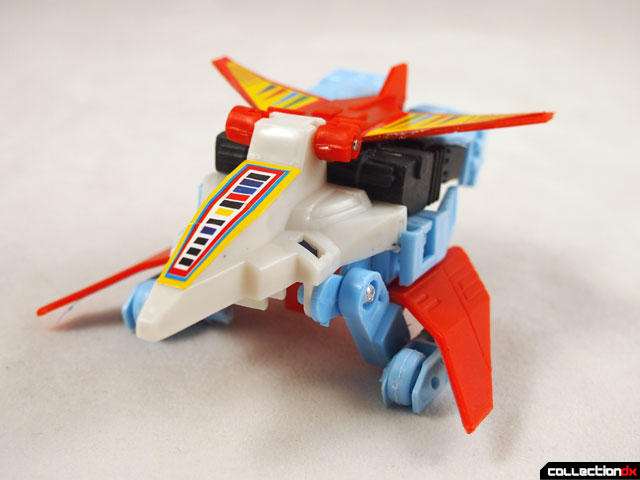 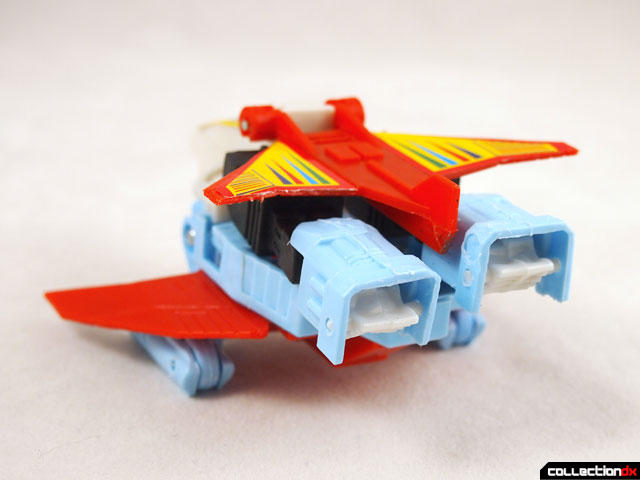 This is one of the worst assembled "modern" bootlegs i've ever come across. The flash (the material left on the parts after taking it out of the mold) was all over the toy, on some parts by as much as a 1/4" out. I literally took these toys apart and cleaned off all of the flash with a razor blade. I should have taken a before and after picture.

The material is cheap and soft. The stickers are mis-aligned and ugly. The transformation is all loosey-goosey.

This exists, and it shows that cheapo toys can be found wherever your travels take you.

I don't know this for sure, but I may be able to provide some insight on the oversized-knockoffs mystery.

My understanding is that the simplest way to make a knock-off of something is to just acquire a specimen of the original toy, break it down, and then take casts/impressions of the original parts. It's naturally much easier than, say, trying to get the original tooling or re-modeling the toy's parts.

The casts can then be used to make new tooling for the knockoff, but there's a catch: no matter how carefully it was done, some details of the original mold will muddy and deform from the original shape, since the specimen will by no means be a perfect copy of the mold. And these aren't done carefully, so they're often horrible casts. So if you produce it at original size... it might not fit together at all, and will likely look like an unrecognizable lump.

Blow it up, though, and bam. Muddy details are less of a problem, unless you care about, say, good parts fit and mold flash. But who cares about that, right?

... now, as to *how* they perform this mysterious re-sizing process, I got nothing. Anybody out there know their manufacturing better than me?

I think another reason for rescaled bootlegs is, in some cases, to produce an attractive item at lower cost by shrinking and simplifying it; or, in other cases, to make a simple, cheap-to-produce item more attractive by making it bigger.

"... now, as to *how* they perform this mysterious re-sizing process, I got nothing. "

Most likely with a pantograph-
http://en.wikipedia.org/wiki/Pantograph#Sculpture_and_minting
Which would also account for some of the loss of detail and shape deformation in rescaled bootlegs.

Hey JoshB, you need this book:

This small $15 book Is a guide book detailing the cheap mostly original transforming/combining robot toys Japan has produced in the last 30 years.

This Air Fighter was originality released with two other robot sets (that each formed from two vehicles) and you could mix and match the six vehicles together to form different robots. (Page 76-77 of that book)

Your review of the Henkei Gatsutai Big Fighter OA from a few weeks back is a bootleg of the robot seen on page 23 of the guide book...The two vehicles BX-1 and BX-2 each transform into robots on their own besides combing together.

You should get that book, it will help in the quest for the background behind all these crazy bootlegs.

I read an article a long time ago about how toy makers rescale toys from original sculpts. There's this machine that has been around for decades. They slowly run a stylus attached to an arm across the contours of the original, and the machine somehow scales it up.

Now I remember, there are gears attached to the arm that move another stylus but at twice the scale, and the second stylus scrapes away at a block of wax. When they're done with this process they have a wax reproduction at a larger (or smaller scale) which they use to make the molds.

This toy is full of it, very 80s sentai robots, i look forward to any other fun odds you find Josh.