With the new Transformers Prime cartoon airing on the Hub, it was only a matter of time before we get new toys to go with the show as well. After getting the initial preview line of First Edition Prime toys, which ended up having a very limited release in North America, the main line of Transformers: Robots In Disguise started up earlier this year. There's been a whole lot of talk about the changes and decisions used to make different, smaller molds that have left a number of fans unhappy. Bumblebee, Cliffjumper, and Optimus Prime for example have toys that are slightly easier to transform and that do not look quite as screen-accurate or well-proportioned in hand compared to the First Edition toys.

In the first wave of the new Transformers line is Wheeljack, the lone Autobot warrior who was once a member of the Wreckers. Wheeljack was one of the characters that did not have a First Edition toy, along with Soundwave in the first wave. So how does he hold up on his own? Let's find out.

Wheeljack's car mode is a super stylized sports car, and I think it looks fantastic. The sharp angles and edges remind me of a Japanese toy slot car from the 90s. That's not a bad thing by any means. Paint application is minimal, but effective. 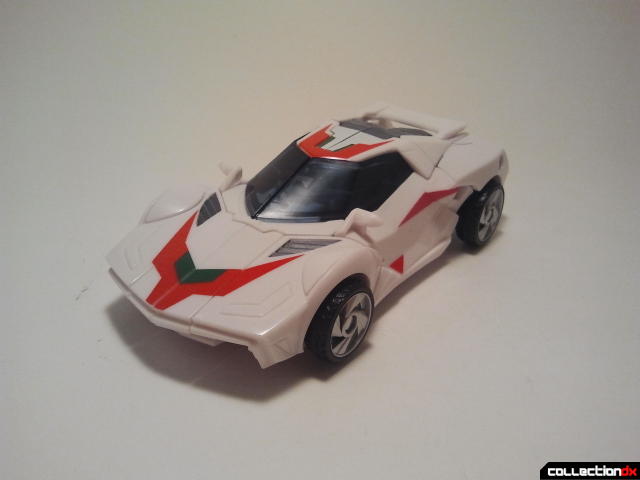 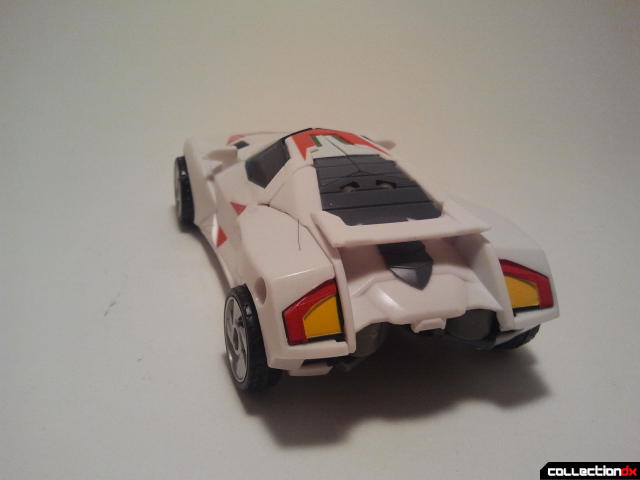 You can store his two swords underneath the car mode, or you can also put them at the front of the car for an attack mode. It kind of reminds me of a puma. 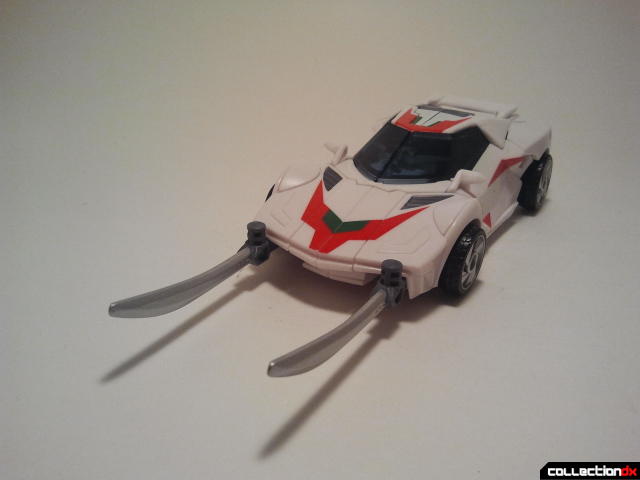 Wheeljack's transformation is surprisingly fun and very intuitive. The feet in particular transform in a very cool way by flipping the foot around 180 degrees before sliding the shins on a rail up and then to the side. Everything locks in place very well with no loose bits or major flaws. 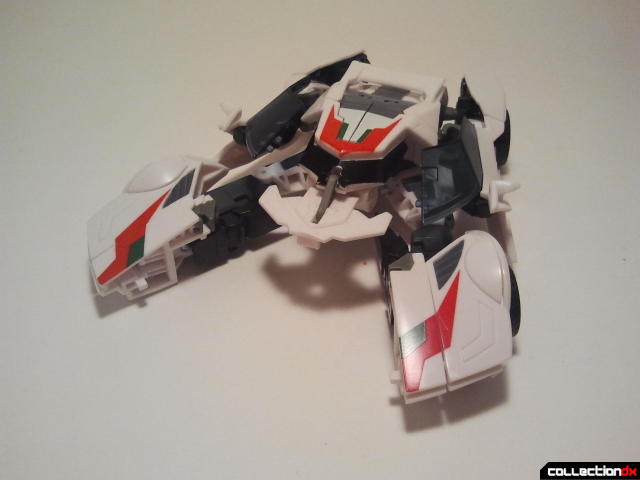 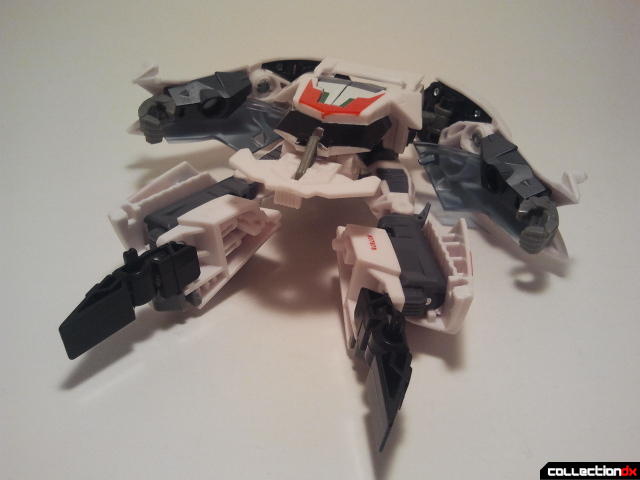 Wheeljack's robot mode is absolutely fantastic. It's clean, with plenty of angles and edges and looks like a very nice robot. His proportions are similar to the original Wheeljack toy as well, with the gorilla arms and wings on his back. Even the wheels end up in the same place as the original toy. 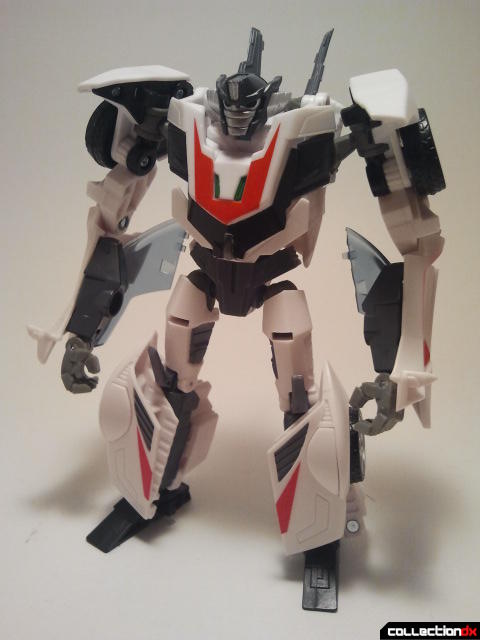 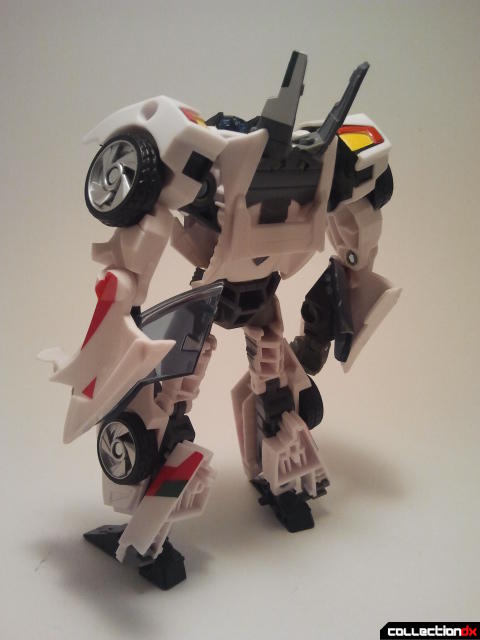 One point of contention with Wheeljack is the windshields that are mounted to the back of his forearms. I've found that these panels are not at all photogenic. They look huge in pictures and seem like a major flaw. In person, however, they really aren't that bad. They are positioned far back enough that they don't interfere with his articulation and have very little negative impact on the toy. 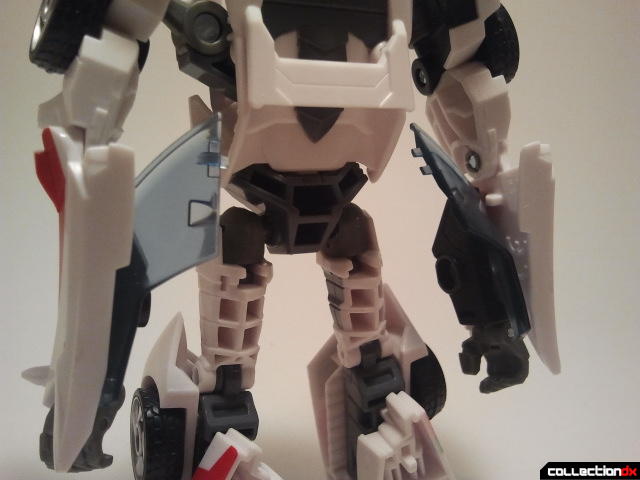 Speaking of articulation, let's jump right into that. Wheeljack's articulation is pretty spot on. He has a fantastic set of ball jointed ankles for plenty of wide-legged stable poses. His arms are also double-jointed due to the transformation. Unfortunately, there's no bicep swivel. There is an additional swivel inside of his shoulder joint, however, that helps to accommodate for that. He's still able to do most poses you'll want for him to do. 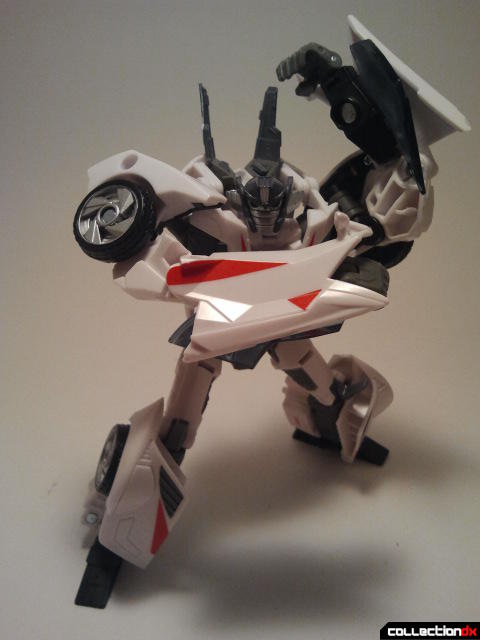 The Prime version of Wheeljack has traded in his wrenches and technical knack for a pair of swords and badassery (Seriously, on his tech-specs he only has an intelligence of 6.). The swords are made of nice solid plastic and aren't bendy in the slightest. They're very nice, if a little bit plain. 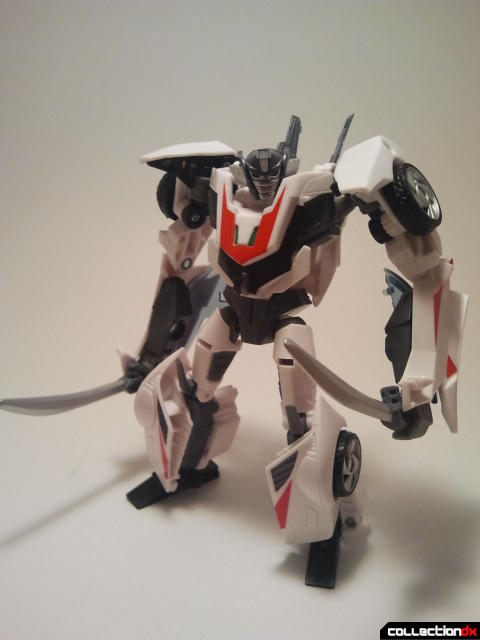 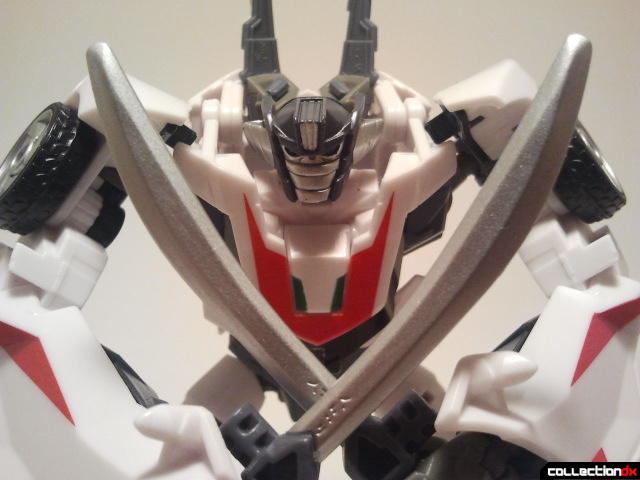 The swords can even be stored in robot mode in a couple of slots located on his back. 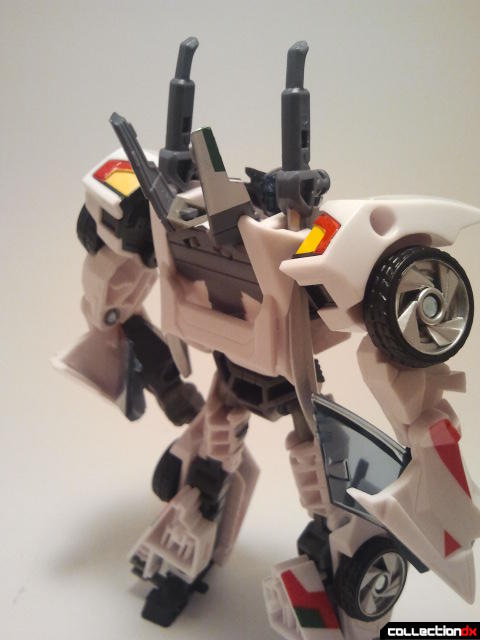 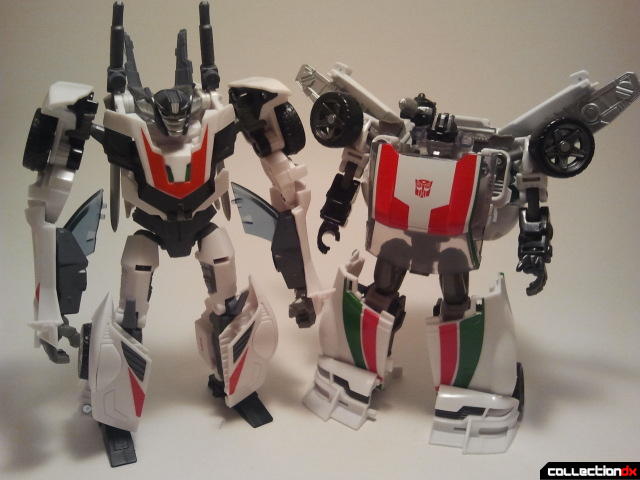 Wheeljack was one of the Prime designs that I was eagerly hoping would get a toy, and I was lucky enough to get him as early as the first wave. Wheeljack is a fantastic toy with a sleek car mode, an awesome robot mode, and an addictive transformation that I can't stop messing with. Out of the first wave of Transformers Prime toys, he's absolutely my favorite and worth picking up for sure. 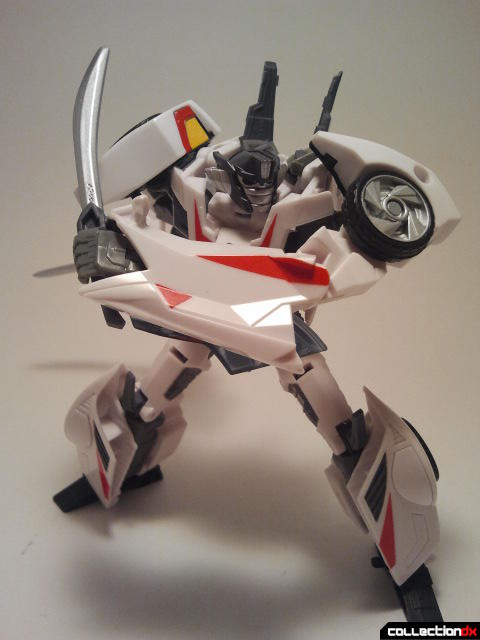 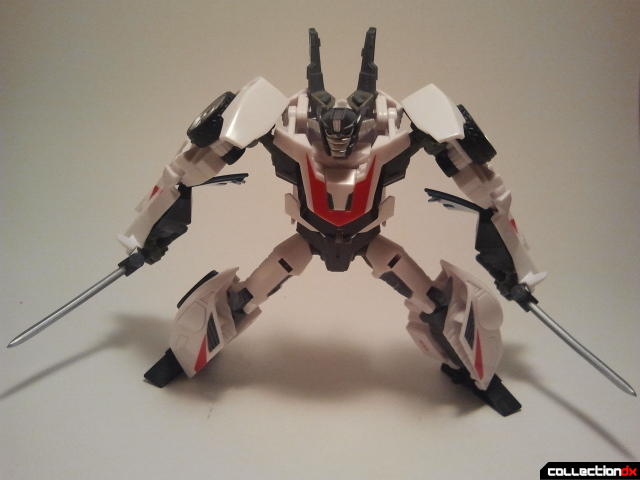 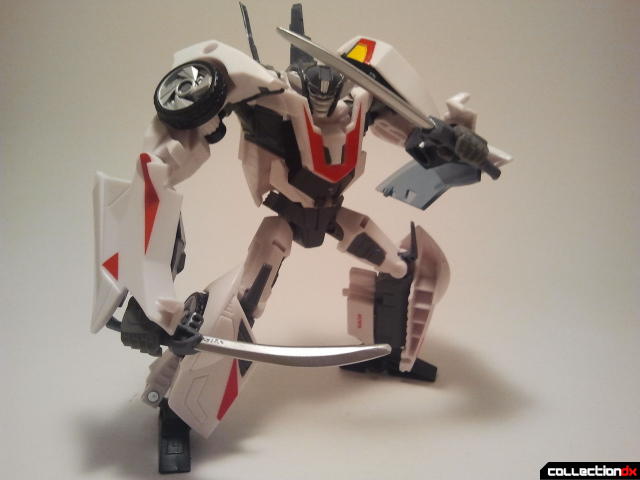 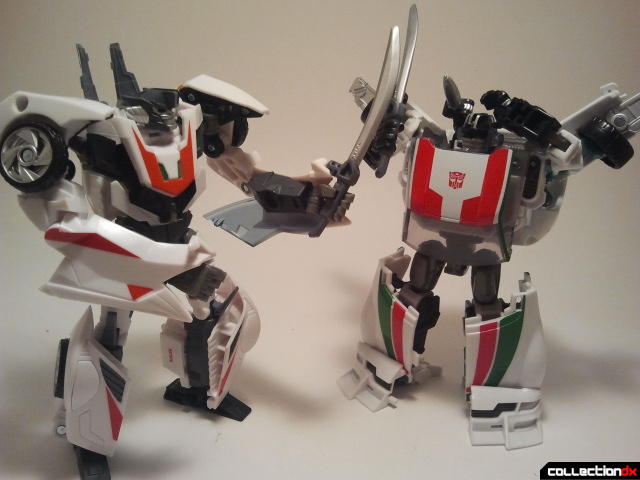 3 comments posted
Yeah, I thought this guy was

Yeah, I thought this guy was particularly slick; real easy to get him into cool poses. Pretty much does the work for you!

Anyway, I didn't know he had slot in the back for holding the swords; that's cool! I also want to make a mention that the holes in his shoulders can fit with the pegs on the sword handles. If you plug 'em in there in car mode and angle them down you can get an interesting look for him.

Yeah, you can get some pretty sick weaponized modes using those holes. However do be sure to take care as to what guns or weapons you plug in to there. I put in Sky Shadow's guns into those spots and they left tiny stress marks on the holes. Thankfully since Wheeljack is white, it's not too noticable.

Ha! It's funny, I was just looking at Skyshadow's guns today 'cause he was another recent purchase, but I didn't try it out yet. I'll keep away from it!