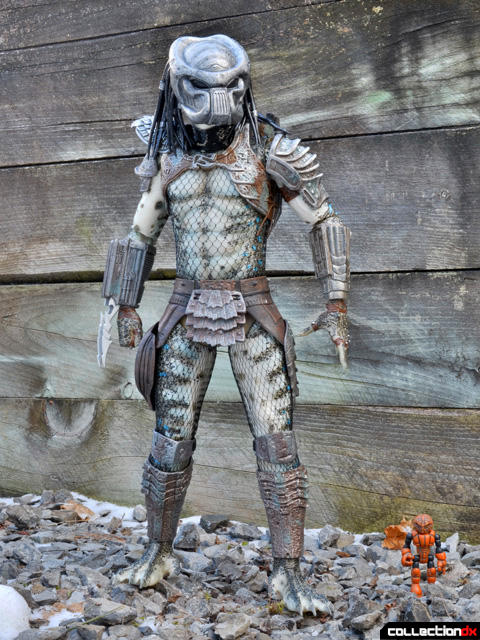 NECA's 1/4 scale Warrior Predator Ram stands around twenty inches tall and is made from solid hard PVC, soft flexible PVC, and some harder plastic that might be POM.  He also features real plastic body netting, elastic straps for the kneepads, and loincloth armor held on with black cord. 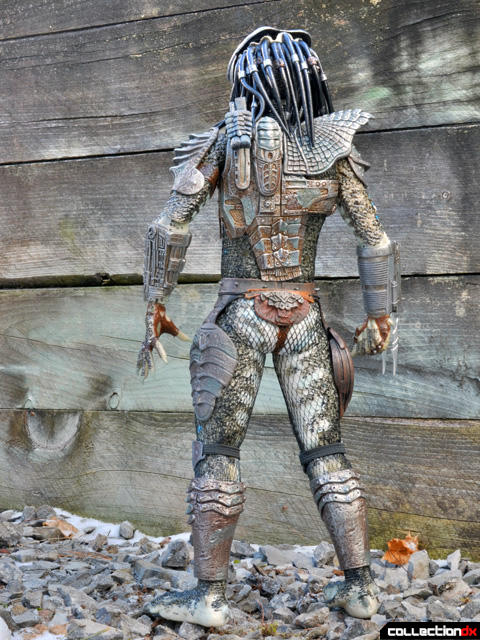 The paint, detail, fit, and finish are stunning.  All that extra room allows for some incredible work on the skin pattern and the weathering on the armor. 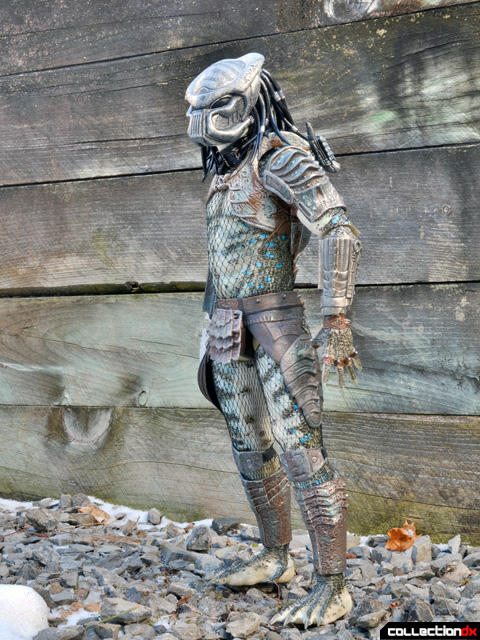 Ram is the kind of toy you can get lost in, exploring all the nooks and crannies for detail you did not even know existed. 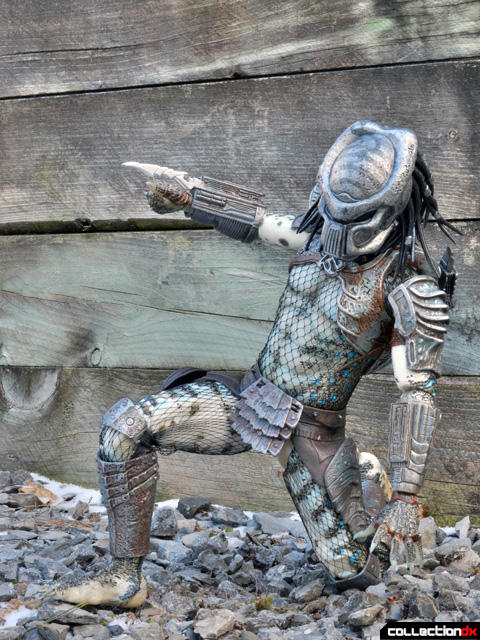 Ram in 1/4 scale shares pretty much the exact same articulation as his smaller counterpart.  The first wave of big Preds featured the earlier Jungle Hunter style sculpt that had V-cut hips and less knee movement just like on the smaller figures, but the new Lost Tribe style figs are more mobile.  The shoulders, elbows, and hips are double-axis joints, the knees are double jointed, and the neck, wrists, ankles, and waist are on ball joints. 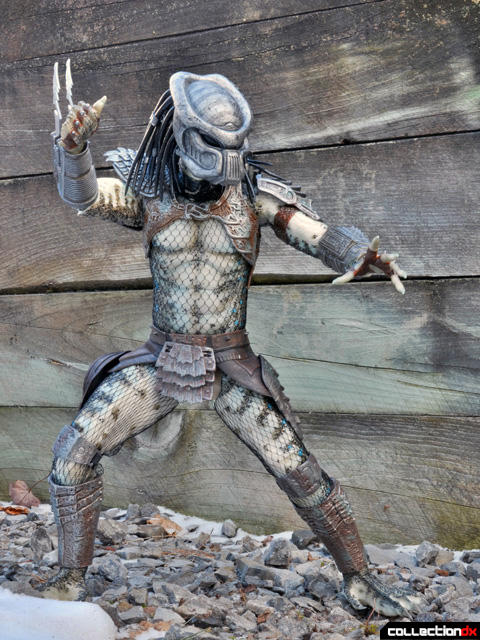 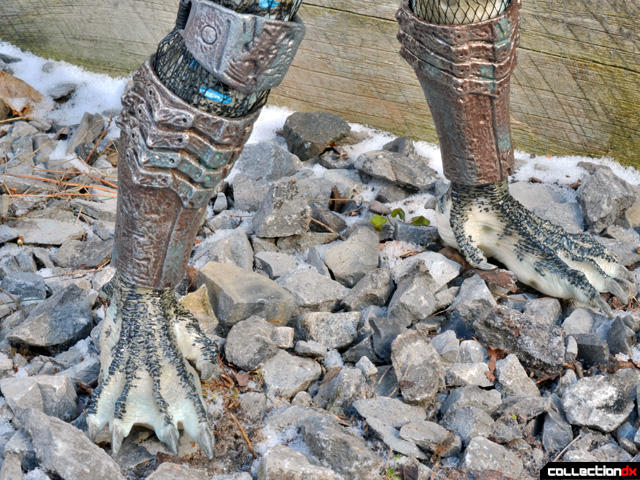 The ankles are particularly impressive for being able to support the weight of the figure while providing enough movement to allow the feet to sit flat on the ground in most poses, ensuring Ram is nice and stable. 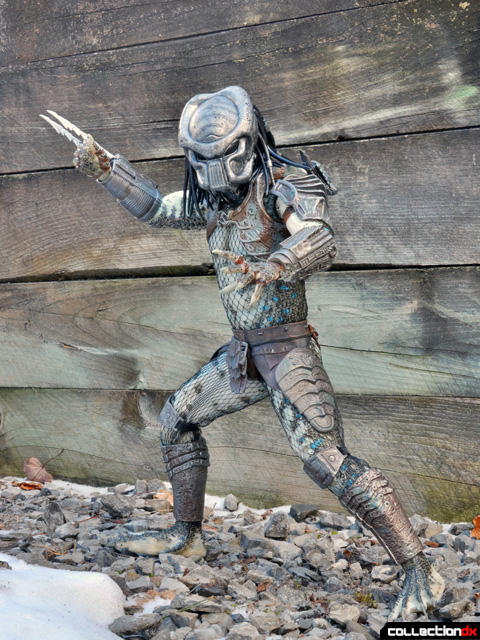 I have seen some complaints on the internet about the look and durability of the plastic netting.  The strands are a bit thin, but generally look the part.  I have noticed a little bit of tearing around one of the knees on Ram from where I have manhandled him to get into some poses.  I can cover up the tear with the knee armor, though, and would rather some slightly fragile real netting to painted on molded netting at this size.  A little damage seems par for the course with Predators anyway. 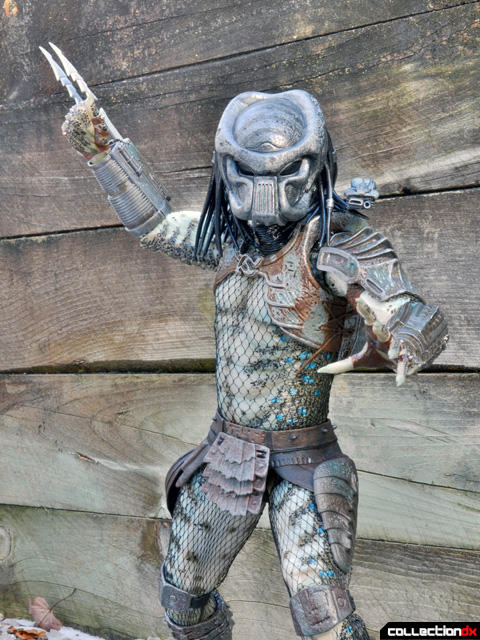 Ram's wrist blades extend just like on the smaller figures.  In this scale, the blades are sharp and rugged and could probably do real damage. 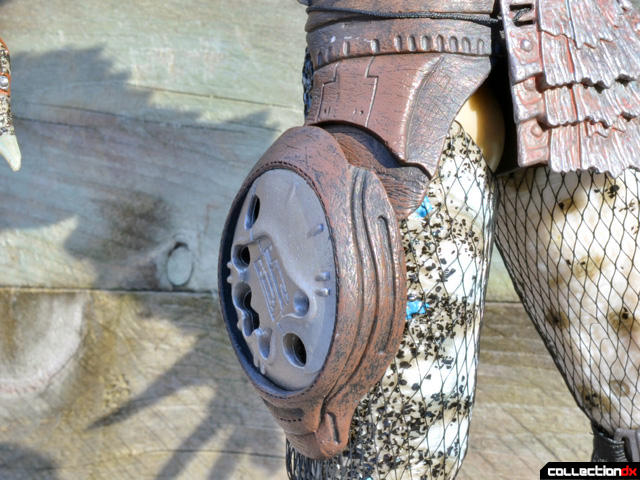 Ram also includes the Lost Tribe style smart disc and holster, but in this size the disc can actually be secured in the flexible holster.  Ram does not include a disc holding hand, so the smart disc stays here. 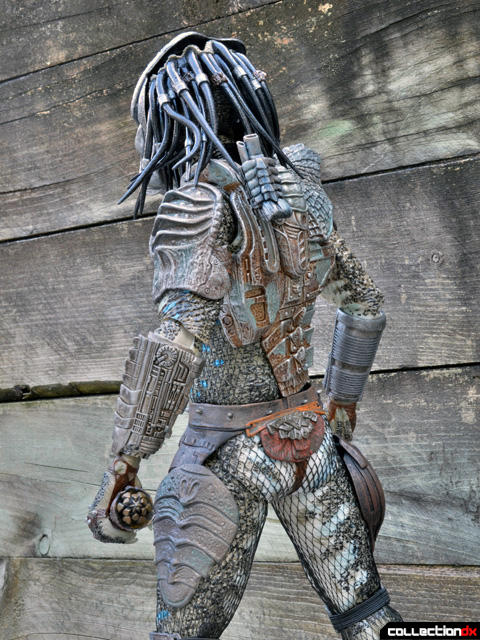 The plasma caster is a solid piece of PVC that was unfortunately a bit warped in the packaging.  With a quick blast from a hair dryer it should straighten out no problem.  The articulated arm for the gun is made from durable plastic that is a bit springy and does not feel like there is any risk of breakage. 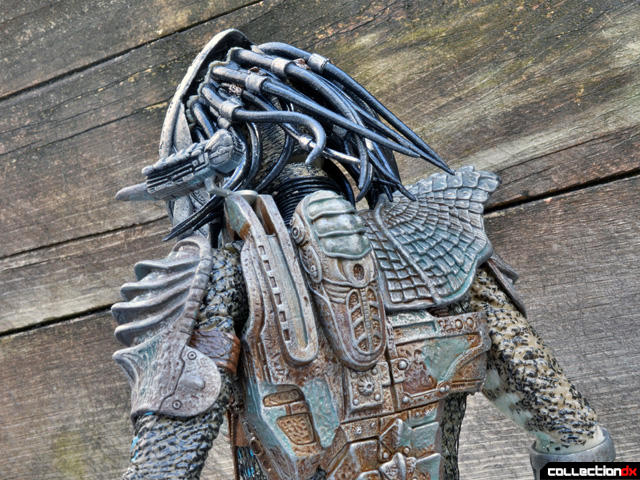 The plasma caster moves up on its rail and is on a ball joint so it can track with the  Predator's head movement. 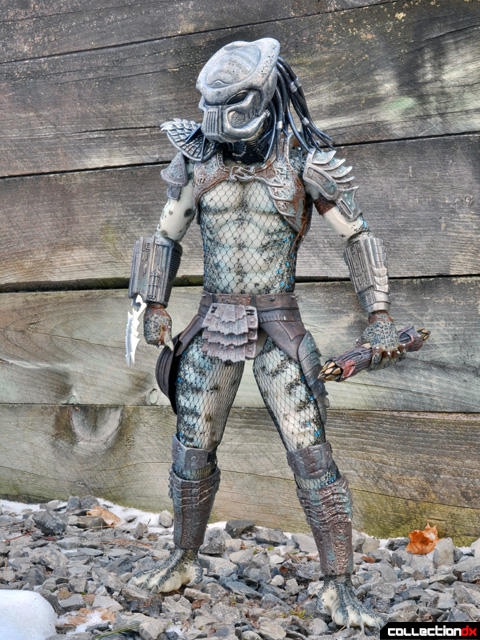 Ram's other accessories are a swappable gripping left hand and a collapsed Lost Tribe style spear to hold.  The hands are on giant ball and socket joints and require a lot of force to switch.  Since the hands feature so much pokey detail, I found it much easier and safer to heat up the hands with a hair dryer.  Once attached they are secure and tight. 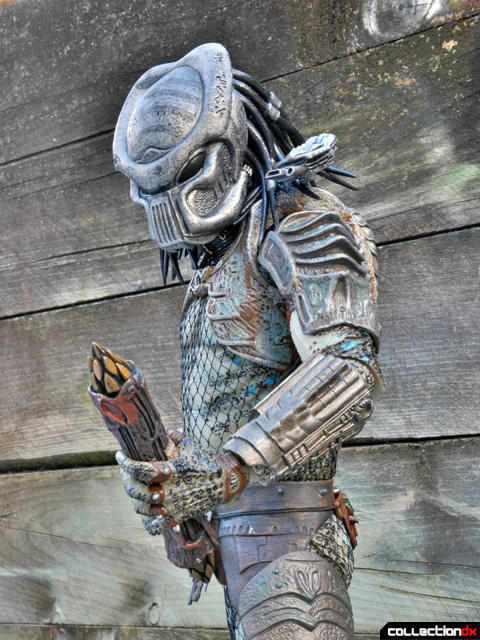 The spear accessory is boring and nicely detailed.  It is neat for 'at ease' poses, but I like my Predators more action-oriented so I stick with the open hand. 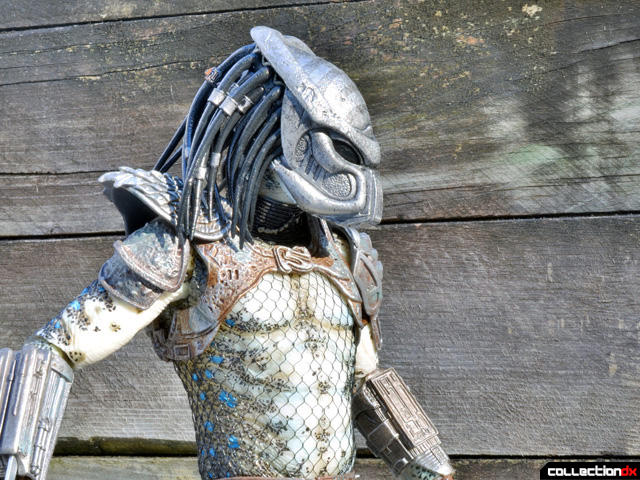 Another wonderful thing about such a large Predator figure is how naturally the soft plastic dreadlocks sit.  They can be splayed all over the shoulders and around the plasma caster in a very convincing manner. 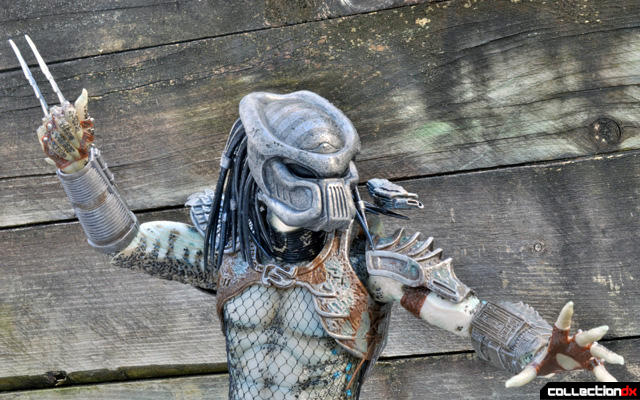 NECA's 1/4 scale Predators retail for $90 and are an incredible deal.  They are sharply detailed, well painted, well made, and fun.  With high-end figures there is always a worry of setting them up so the clothes sit just right and they don't tip over and whatnot, but on these big chunky action figures there is none of that.  Grab them by the head, move them around, whack somebody on the head with them... it's all good.  These guys are available now from places like Toys'R'Us and comic book shops and I cannot say enough nice things about them.

What's really nice about this figure is that it looks like the man in the costume, but it is so basic without any excessive details or features that distract from the core figure. Does the mask come off, because it doesn't look like it?

Thanks! I also really like how they look the part, not re-imagined at all. The mask does not come off. For the Jungle Hunter and City Hunter there are unmasked versions available separately.