FansProject is one of the premiere producers of third-party unlicensed Transformers upgrade parts, accessories, and original figures.  Warbots and Causality lines of standalone figures and figures that combine with existing Takara and Hasbro toys have set the standard for unlicensed not-Transformers toys.

Assaulter is the latest release in the Warbots line, following soon after the excellent Steel Core.  As I'll discuss further in this review, however, Assaulter has much more in common with the earlier Defender than Steel Core. 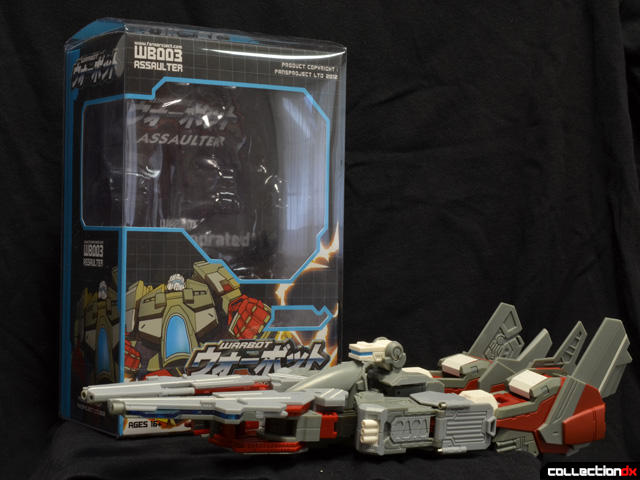 Where Defender was a reimagining of the character Springer from the original Transformers line that took some artistic liberties, Assaulter is a  much closer update of Broadside, another G1 triple-changer.  Like the previous Warbots releases, Assaulter comes in a lovely printed and die-cut box protected by a clear plastic outer box.  The graphics are sharp and the whole presentation feels like it was made with care.  Assaulter comes packaged in robot mode, but showing off the carrier mode demonstrates how much figure is jammed into the box. 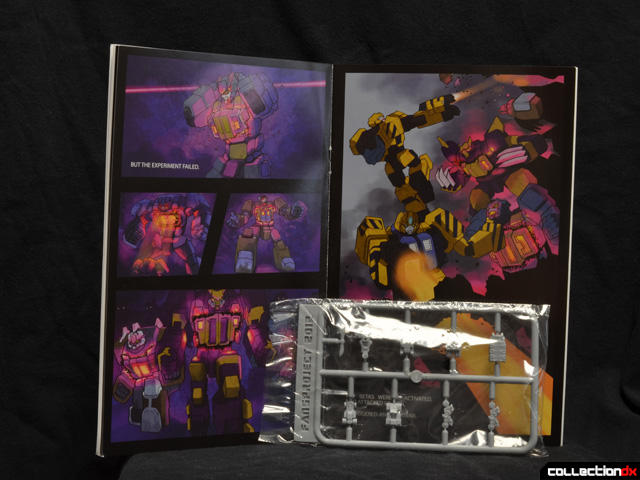 Besides the actual figure and two rifles, the box contains a nice printed comic/instruction manual and a sprue of slightly soft plastic miniatures. 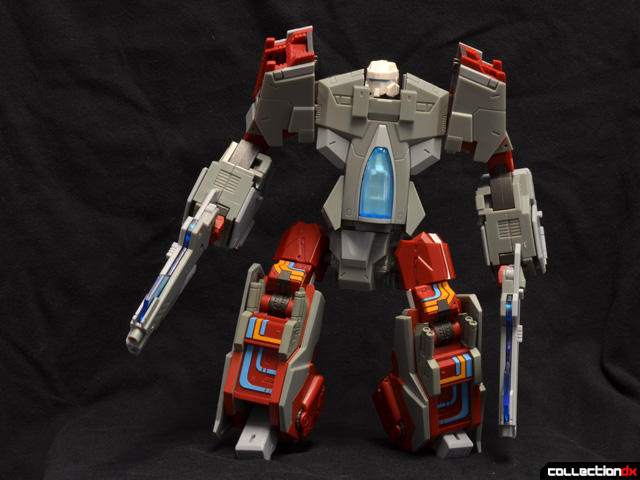 Assaulter stands around eight inches tall and weighs about fifty pounds.  The bulk of the legs below the knee is made from diecast.  The paint and fit are so good that it is difficult to identify what actually is and is not diecast, but picking up the figure reveals that there is a major gokin presence. 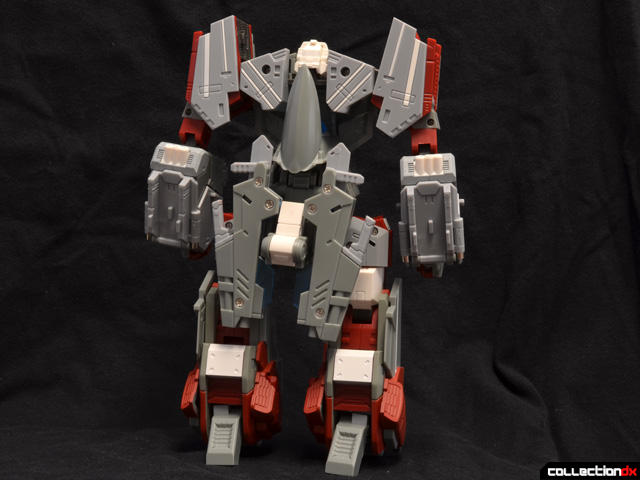 The twin rifles can be stored on Assaulter's butt.  The back is a little ugly with the way the nosecone floats in space with nothing to clip on to, but is surprisingly coherent for a triple changer in general. 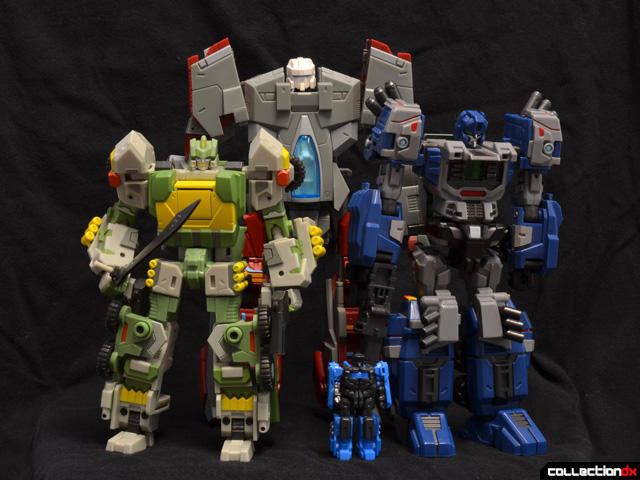 Not-Broadside dwarfs over the previous Warbot releases in every way.  He is taller, wider, thicker, and heavier.  Much heavier.  Looking at both the engineering and aesthetic differences of the Warbot line so far makes me suspect that there are actually two different design teams working on Warbot figures.  Assaulter looks, feels, and transformers much more like Defender than the all-plastic and creatively transforming Steel Core. 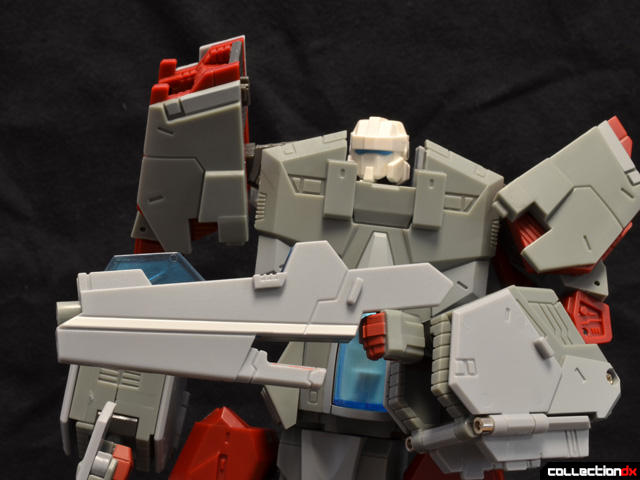 Different, same, whatever, Assaulter is great.  Even his accessories are sharp looking.  The two rifles feature folding handles and fold-out blades that we'll get to later. 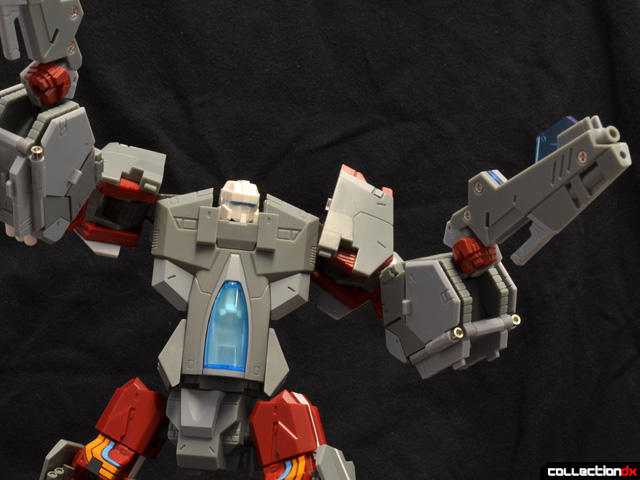 For such a brick, Assaulter features a surprising amount of articulation.  Most joints have at least some ratchet feel to them, with the hips and knees being extra tight and rugged to support all that bulk. 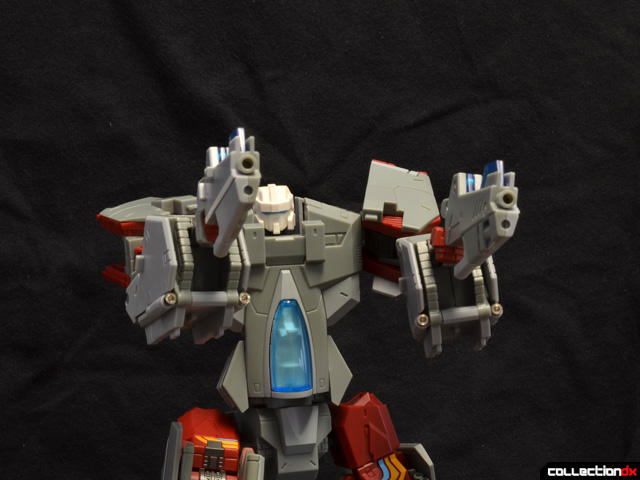 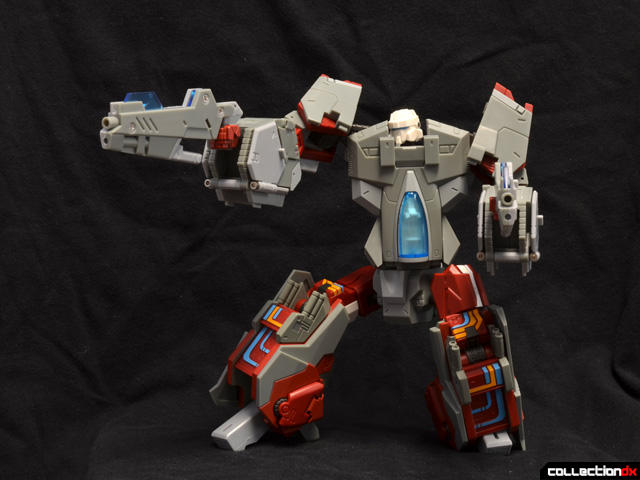 Assaulter is well articulated, but more importantly he actually looks good using that articulation.  Even though he is a brick, the sculpt is surprisingly dynamic in motion.  He has all the poise and dynamism to feel like a giant bringing his bulk to bear. 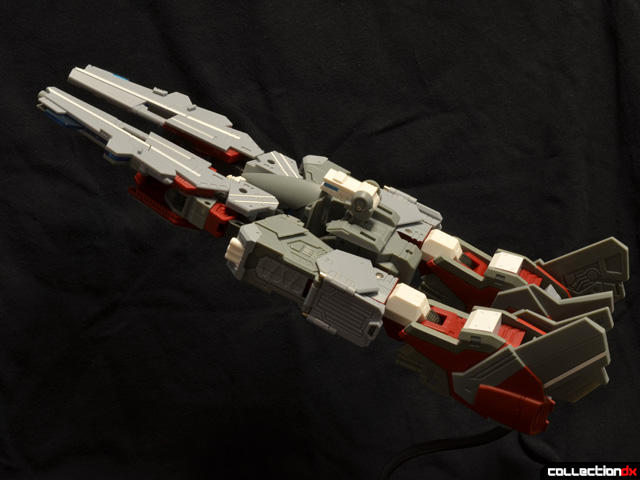 Transformation to Carrier mode is reasonably intuitive and fun.  A few parts tuck and fold into each other in a manner that again reminds me very much of Defender, but Assaulter's transformation is never as frustrating as the earlier Defender's.  The arms tuck in, the guns form the ramps, and the legs tuck in to form the rear. 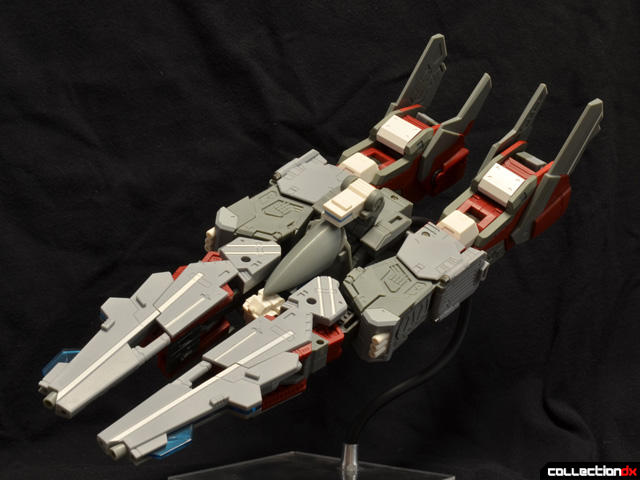 It's a robot lying down, but Carrier mode has enough detail to sell the mode.  It's a very Macross-ish capital ship design with those twin booms and cannons. 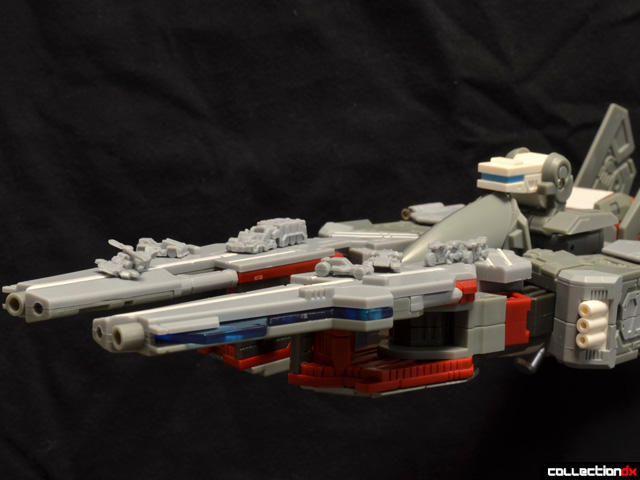 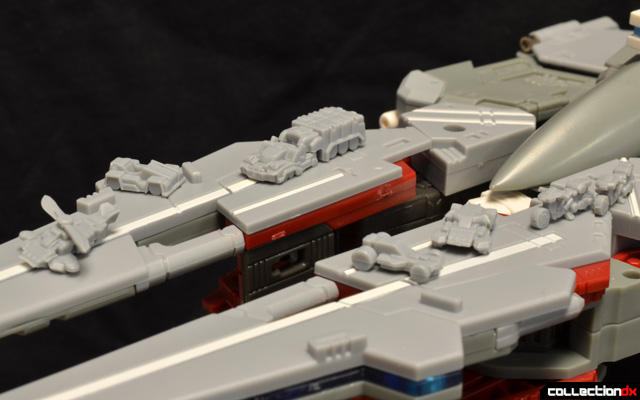 The sprue of plastic miniatures I mentioned earlier contains unpainted soft-plastic vehicle mode versions of FansProject's previous releases. There are also some unreleased designs such as the bikes, which look like the unreleased Junkions FP was going to do until the Classics release was announced.  I am hoping the Roadbuster/Mugen Caliber looking car is a tease of an upcoming release.  I'd kill a man for a new actual Roadbuster to replace the mediocre CM's Corps Caliber.  The trailer on Steel Core also hints at an announced possible trailer project.  The little Steel Core and Defender are adorable, and there is a funny little bit in the instruction comic dealing with the idea of mass shifting. 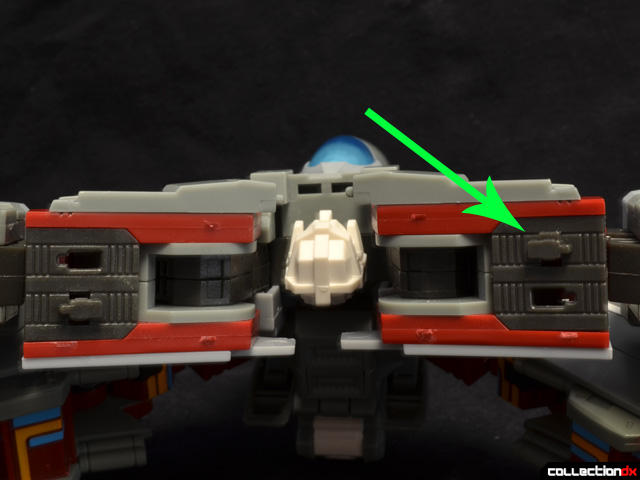 Transformation from Carrier mode to Jet mode is a bit more complicated, but still never frustrating.  The torso unfolds to extend the nosecone and cockpit, and the arms shift around to form the fuselage.  The only problem I have here, and really the only problem with the whole toy, is that there is a malformed tab on one of the shoulders that prevents the shoulders from locking together above the head for Jet mode.  I should be able to fix it with a quick trim of the offending tab, but it is a surprising little QC flaw for a FansProject release. 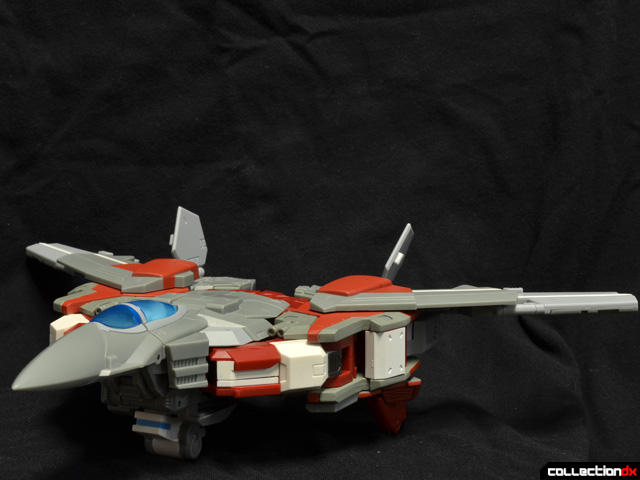 Jet mode is a brick with wings, but it has heart.  There are even foldout landing gear on the legs with rotating wheels. 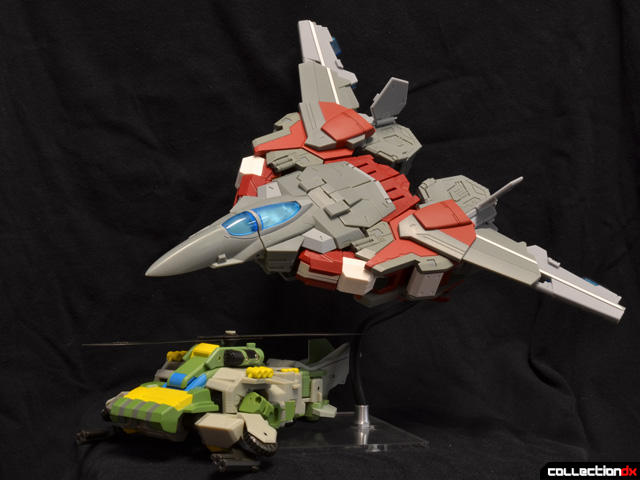 In the air, Assaulter almost seems like he could fly.  Almost. 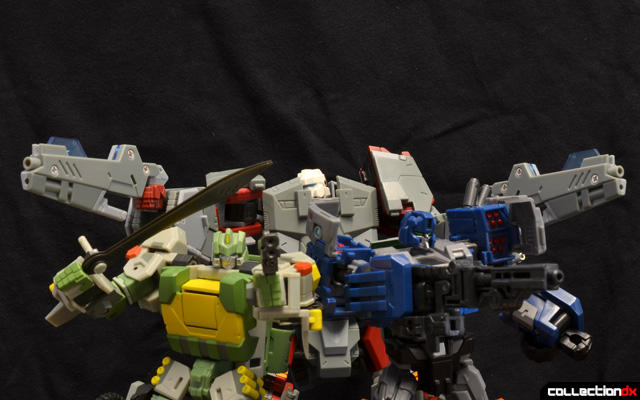 Assaulter is a gorgeous and expertly made figure.  The Warbot line really comes together with its third member, and the trio complement each other very well. 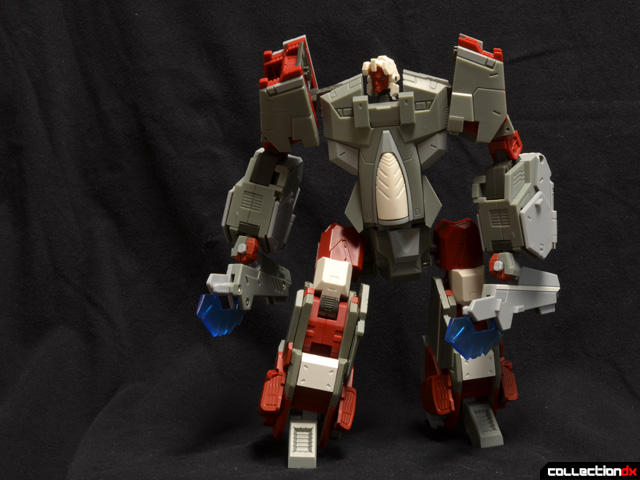 Not-Broadside is billed a triple-changer, but he actually has a surprise forth alternate robot mode.  Turning around the legs, rotating out the armored cover for the cockpit glass, and flipping up the helmet reveals Assaulter's alternate face-breaker mode.  The rifles transform into vicious looking axes.  If the regular robot mode is really Broadside, then this mode is Assaulter, kicker of butt. 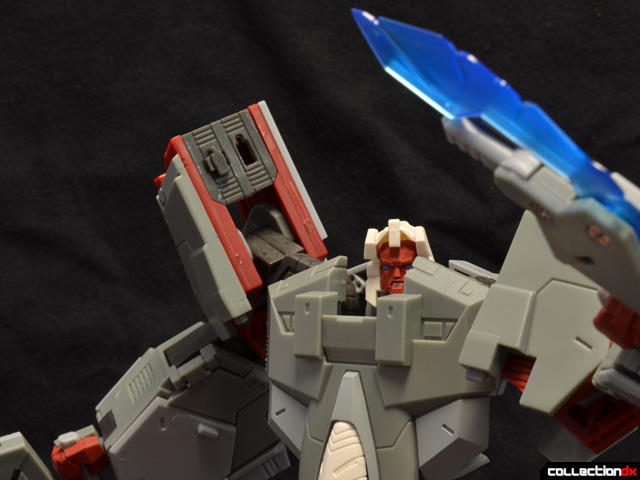 The red face is nicely sculpted and intense enough to sell the close combat mode.  In Transformers comics Broadside has been developed from an ugly toy nobody liked to a heavy duty fighter brought out when things need doing, and Assault mode captures that well. 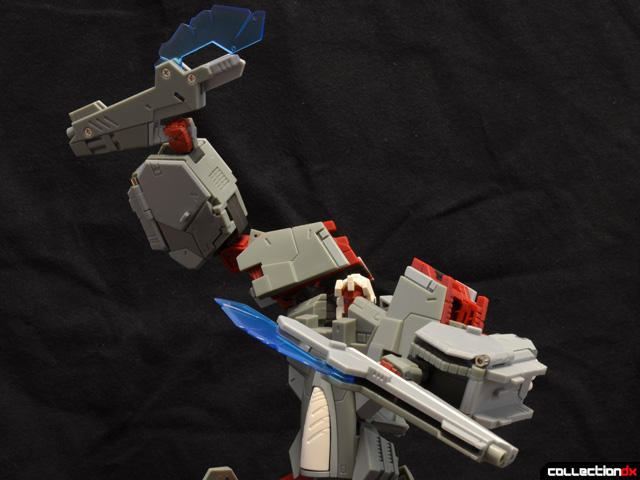 The axes have weird handles, but the clear energy blades are dangerous looking and convincing. 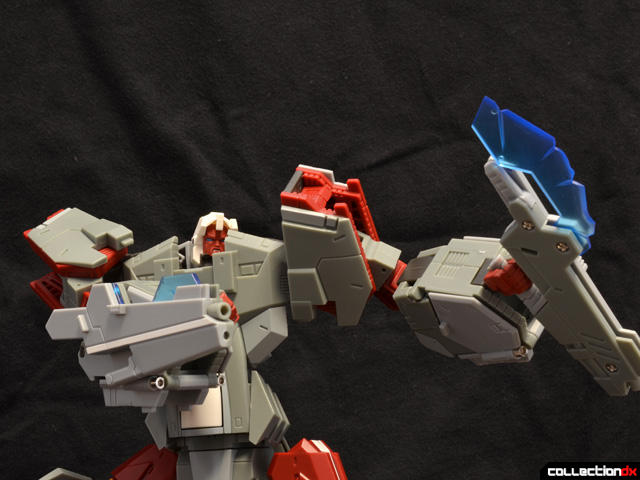 The rifles can also be attached to the arms so Assaulter can still take on baddies at range while busting heads up close. 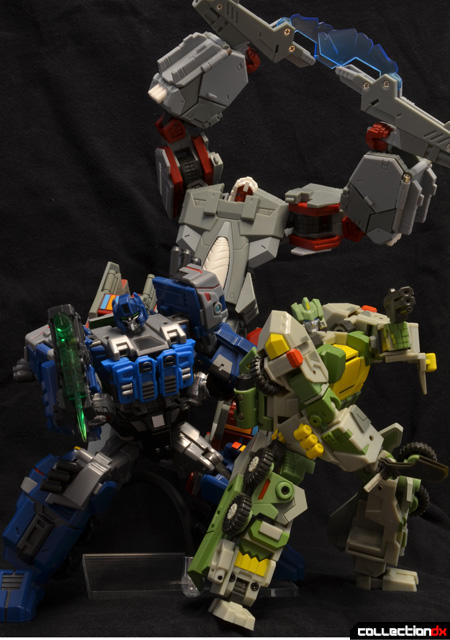 With everybody geared for some close up fisticuffs, the Warbot line really shines.  All three figures are nicely made and cool looking robutts that feel dynamic and capable of holding their own in a fight. 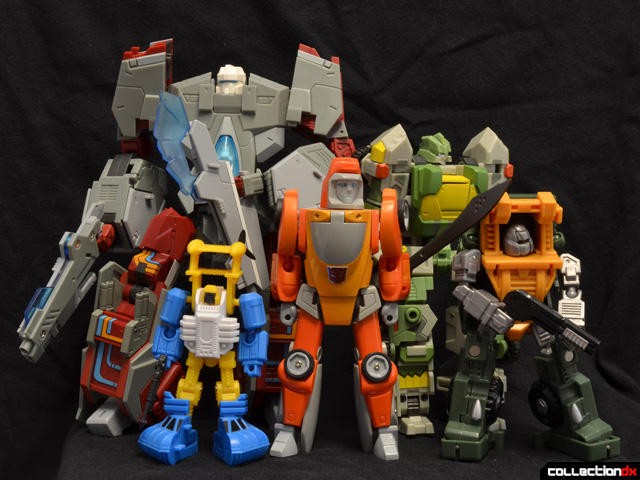 Putting Assaulter alongside some other third-party not-Transformers releases really emphasizes the different approaches different third-party companies have taken.  I love them all. 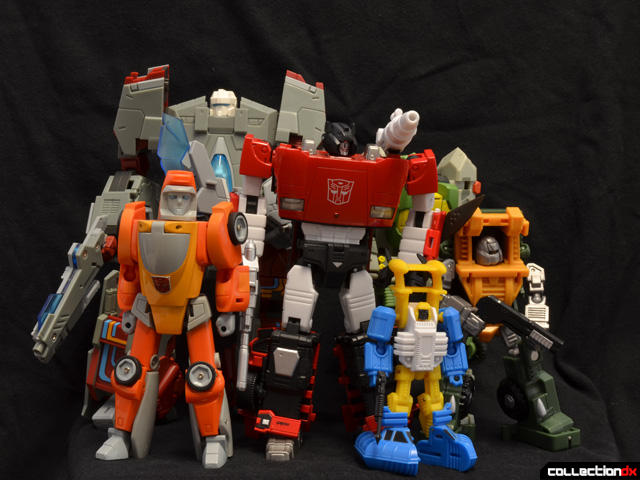 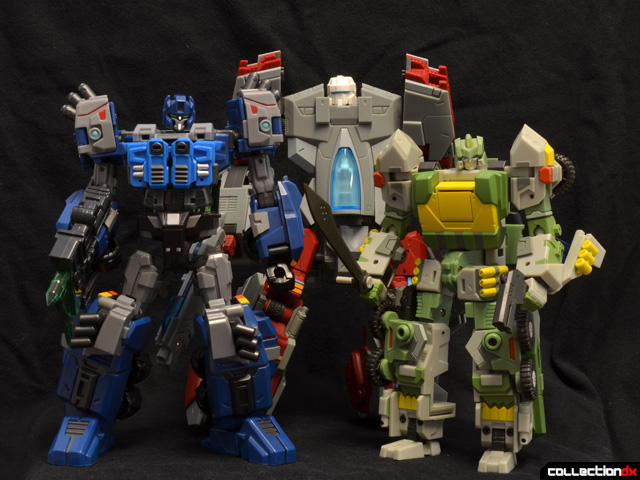 Assaulter cost about $95 plus a couple bucks for shipping direct from FansProject.  Broadside has always been a bit of a niche G1 character, but I would recommend this figure to any fans of Transformers or cool transforming robot toys.  The alternate modes are coherent enough, and the robot mode is good clean fun.  There is a lot of figure here, and aside from a very minor QC niggle I have not seen elsewhere, it is expertly engineered and finished.  Assaulter is chunky, rugged, posable, and weighs a friggin' ton.  What more could a robot collector want?

That's a very heavy toy. Heavier than some toddlers. Unbelievable.

And as you said, bad-ass looking.

They raised the bar again.

By the way, the carrier mode looks like a base in Gundam lore and the jet mode is like a pimped-up Starscream.

That really IS unbelievable!! Prometheum5, is that really true??

50lbs in an 8 inch figure, of which probably half is metal, would mean than Fans Project had developed a new variety of metal, several times heavier than platinum. I can't tell if you guys are joking or not...

well if the Warbot Assaulter is made of a new variety of metal, several times heavier than platinum, then i think Prometheum5 really should've mentioned that in the review???

The rumors are false. Assaulter is actually made out of an ultra-dense new brand of meatloaf.

And he would do anything for love.

I like the sculpt on this other than the hands. Had they added more paint apps on the torso and maybe head I would be more interested in it. To me it looks like the legs are done, but the rest is still part of the unpainted prototype.

I can see what you're saying, it's a lot of gray. Its actually pretty accurate to the original toy tho, with s lit of color on the legs and not much else:

Unless its a dumbbell or Superman's key to the Fortress of Solitude, I doubt that Assaulter weighs in that range. I bet its just the same weight as an ordinary laptop.