Iron Man 2 smashed into theaters in May of 2010, accompanied by an absolute wealth of merchandise, books, and most importantly, toys! Taking place 6 months after the end of the first film, Iron Man 2 sees Tony Stark upping the stakes and dealing with his new role in the world. The film features many more and varied mechanical designs, including three suits of Iron Man armor throughout the film, and the fearsome War Machine.

In the comics, Tony Stark creates the Variable Threat Response Unit suit, aka the War Machine armor (reviewed in 3 3/4" scale by Dkun! ) to combat threats that surpass the capabilities of the regular Iron Man suit. When Tony is forced to fake his death he leaves both Stark Industries and the War Machine armor to James Rhodes. The heavily armored suit fits Rhodey’s fighting style much better than the traditional Iron Man suits, leading you to wonder if Tony built the War Machine armor with Rhodey in mind. When Tony reveals that his death was a ruse, Rhodey gets fed up with being left out of the loop, and leaves, taking the suit and the War Machine mantle with him. He goes off to work with the West Coast Avengers, have a solo career as a gun for hire, both fight and help Iron Man from time to time, and be generally awesome.

In the film, Tony Stark is deemed unstable and out of control by the United States government and military, and Lt. Col. Rhodes, Tony’s best friend, and government liaison to Stark Industries, is assigned to bring the Iron Man ‘weapon’ in. After seeing Tony hit rock bottom and abusing the dangerous Iron Man suit, Rhodey dons the silver prototype Iron Man Mk II and fights Tony, eventually escaping with the suit to Edward’s Airforce Base, where rival government contractor Justin Hammer up-arms and armors the suit for military use, piloted by Rhodes. Hijinks and plot ensue, and you should really see the movie if you haven’t yet, but suffice it to say, seeing the awesome firepower of the War Machine suit in action is a spectacle not to be missed.

Diamond Select Toys is a sub-company of Diamond Comic Distributors, the primary distributor of comic books in North America. As I discussed in the Iron Man Mk IV review, the Iron Man 2 figures are really well done. 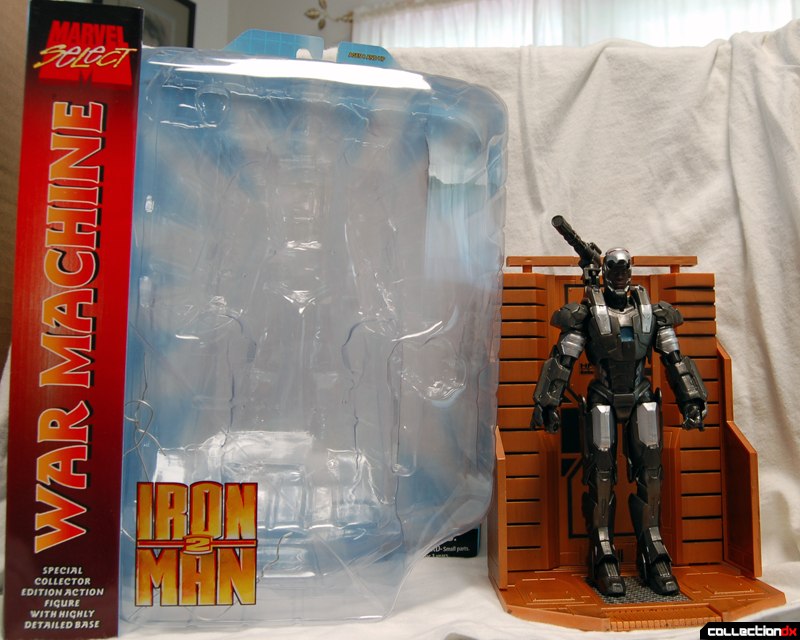 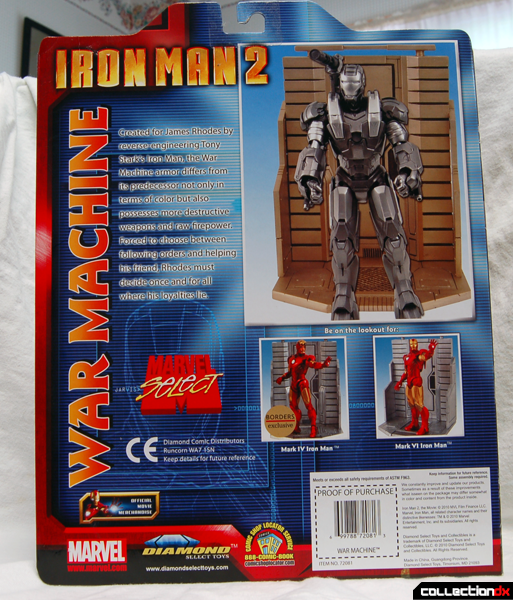 The box for this figure, like that of the Iron Man figure, is comically oversized, and mostly empty space trapped in a massive vacuum-formed bubble. Once freed from the giant clear prison, you are left with a display stand and the figure with separate mini-gun piece that must be attached, and a removable mask. 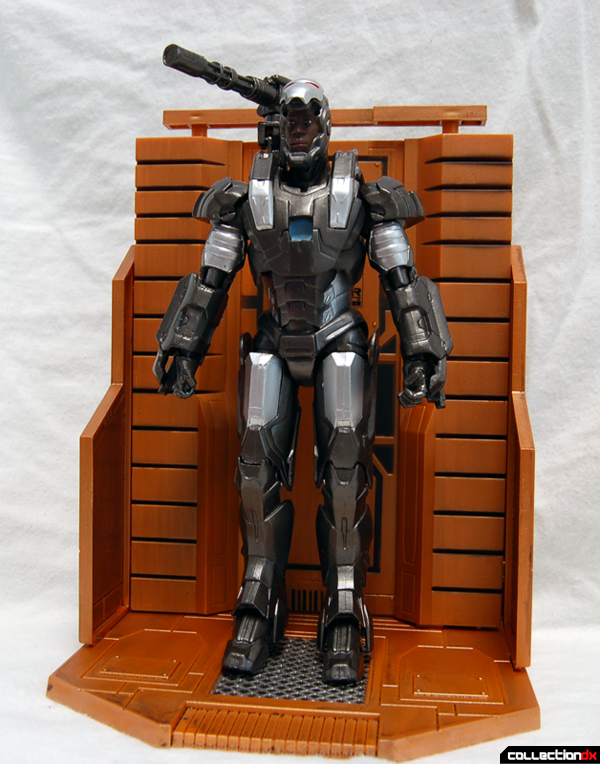 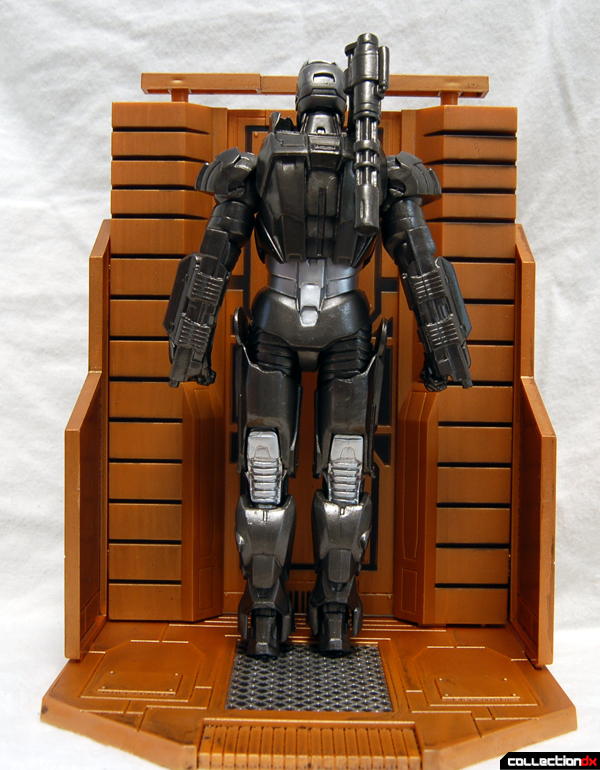 The display stand is the same design as from the Iron Man figure, but painted gold with a nicely printed Hammer Industries logo. It is lightweight and cheap feeling, but looks good and gets the job done. 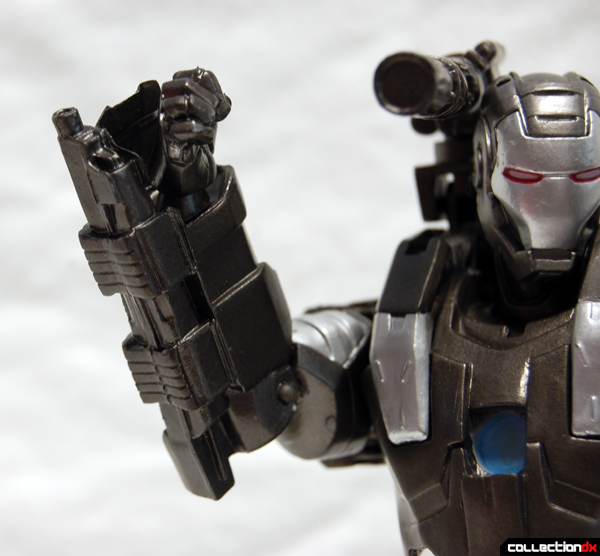 War Machine stands around eight inches tall, plus a little for the posable mini-gun. The sculpt is chunky and hefty, and accurate to the film. The paint has a nice gunmetal luster to it, and is very clean. The eyes and chest reactor are painted with a glowing effect, and look convincing. One missed opportunity on this figure is the omission of all the printed military decals seen in the movie. All of those stencils and warning signs would have really spruced up the figure, and are present on both Hasbro’s 3 ¾” and 6” offerings. 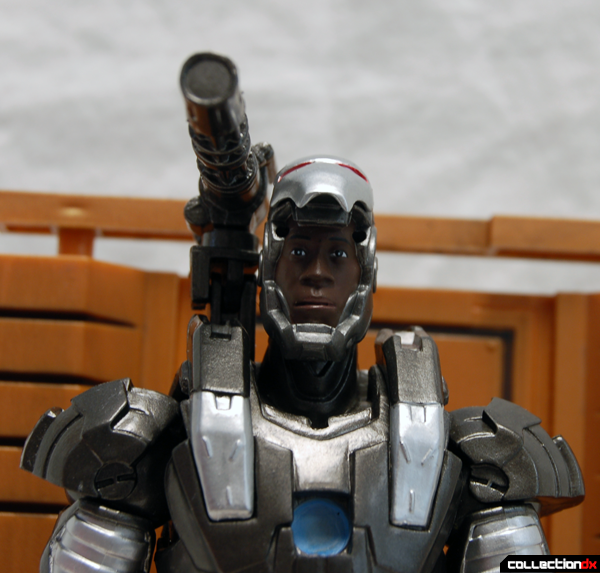 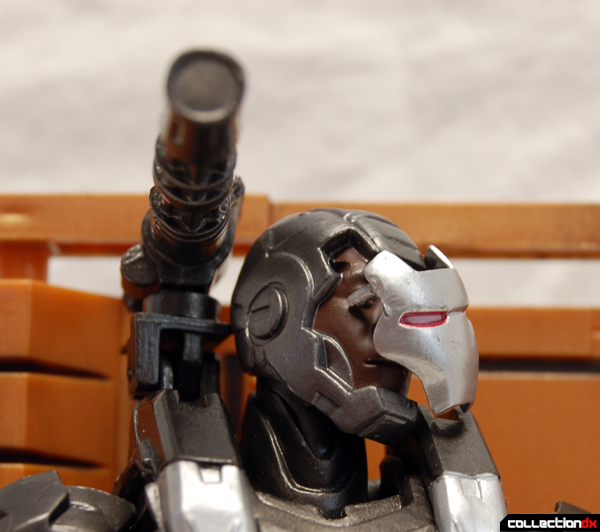 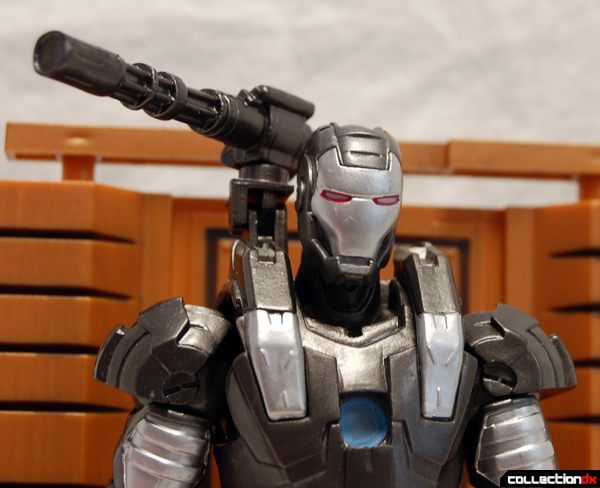 The head sculpt is good, with the same style removable mask as on Iron Man. The Don Cheadle likeness is surprisingly good, and the whole package comes together quite nicely. Also visible in these shots is the minigun, which does not feature barrel detail at the end for some reason. 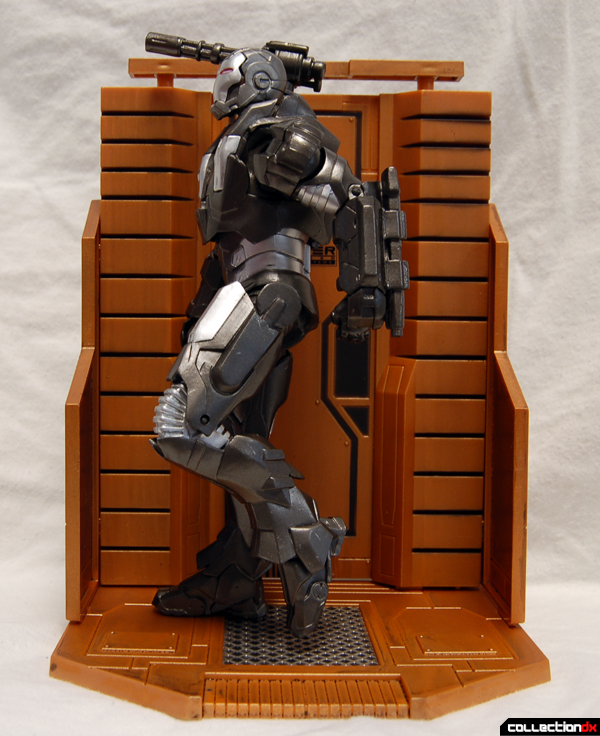 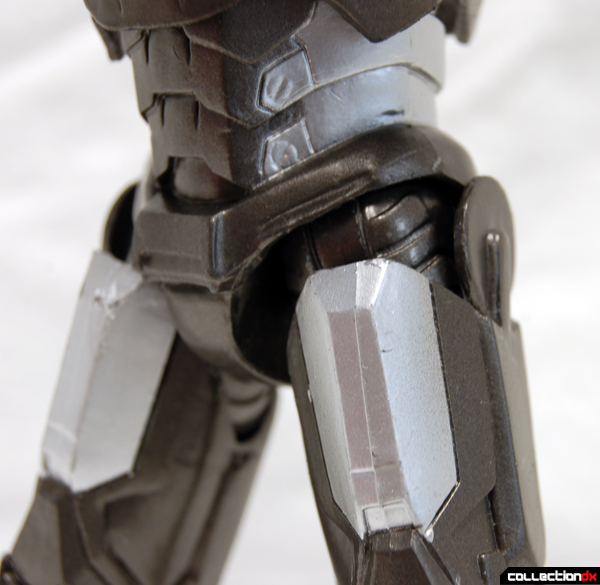 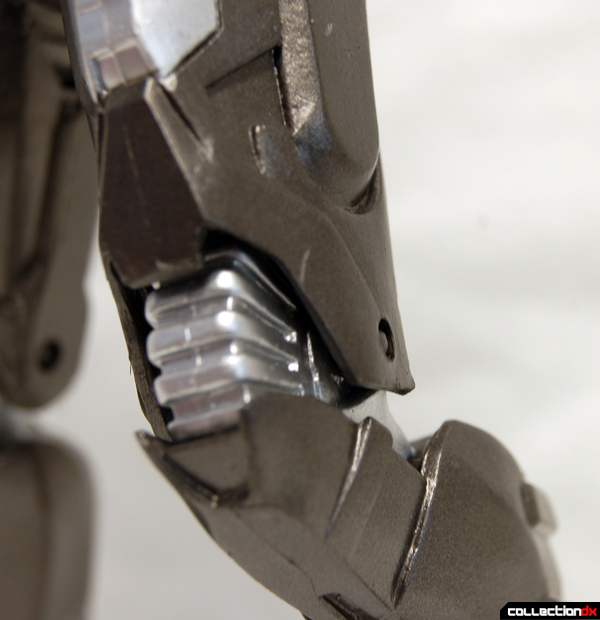 The articulation on this big guy is quite good, with one notable exception. The hips feature a two-piece layered effect similar to on Iron Man, affording the figure a great range of motion that looks like an actual piece of machinery working. The elbows and knees also feature the same style of layered assembly, providing knee detents and a really convincing look. The wrists and ankles are ball-jointed, but the ankles are hindered by the armor design. The head is on a double-ball joint, and the neck is long enough that the head clears the bulky shoulder/chest missile launchers, making for an expressive figure that can look any which way… and if War Machine can see you, he can shoot you, since the minigun is also multiply-jointed, and goes any-which way. There are unfortunately no missile launcher parts for the chest assemblies. 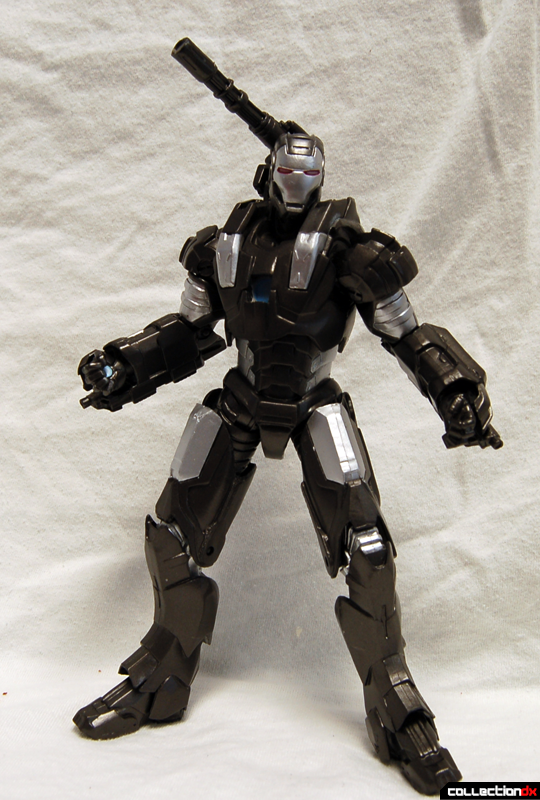 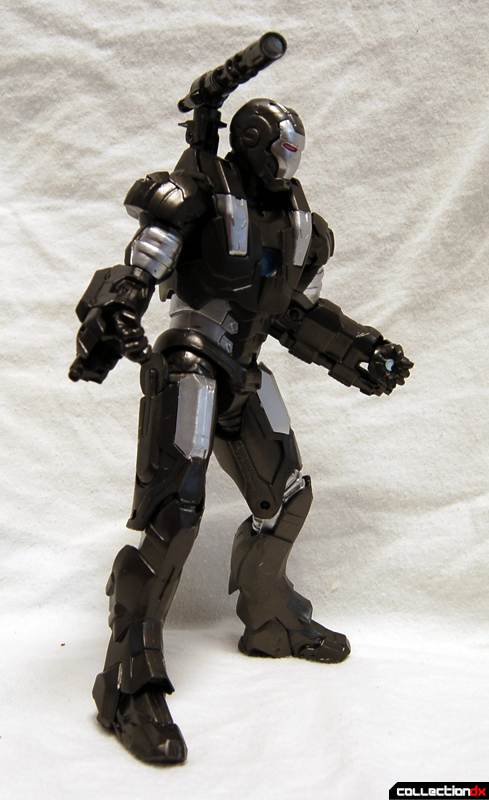 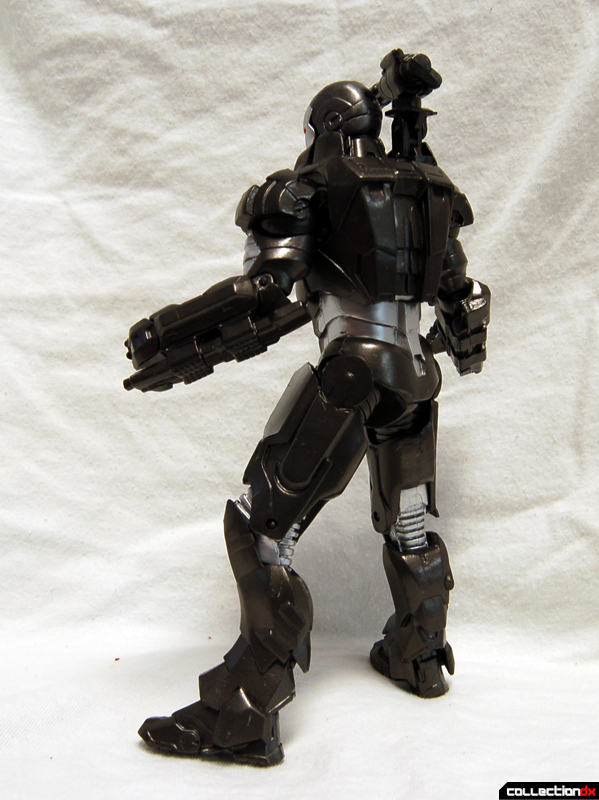 The one area where the figure skimps a bit, for a good reason, is the shoulders. They are on a small ball and socket, but have no lateral motion, so the arms effectively only swivel forwards and backwards. The reason for this, I think, is to avoid the really ugly hinged shoulder-pads of all the other small War Machine figures we’ve seen so far from Hasbro. Sculpt-wise, the DST figure is much nicer and more convincing, but at times you will miss that point of motion. 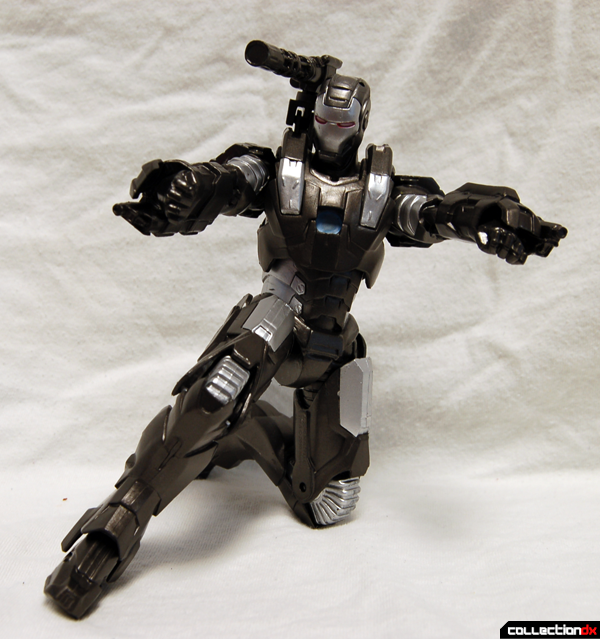 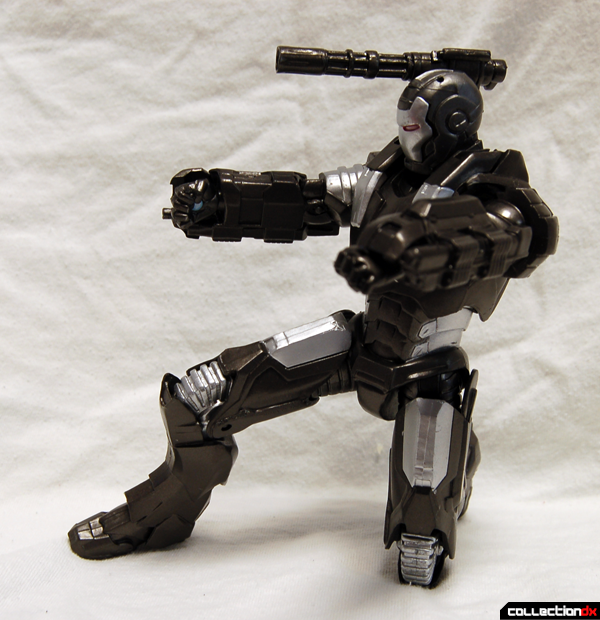 The figure is a touch top-heavy, but looks great with all his guns aimed, blasting away at whatever threats come his way. The sculpt is big, powerful, and accurate, and the figure looks great doing most anything. There are a few minor niggles and missed opportunities, but the figure is really fun in your hands, and looks great alongside the excellent DST Iron Man on your shelf. 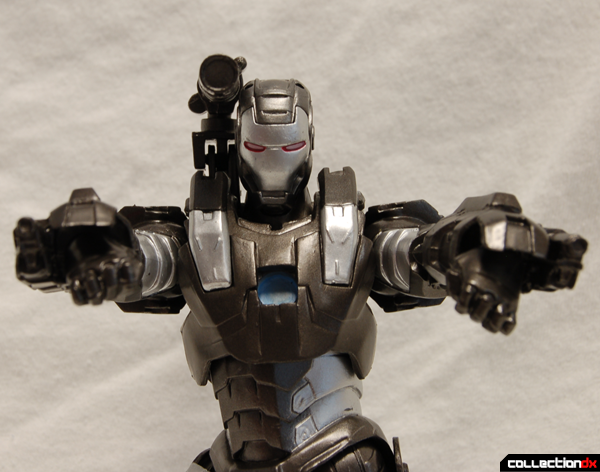 sh figuarts has motion unhindered by shoulder pads... like on kamen rider decade not a single motion was restricted by his mostly pink and quite large shoulder pads

He looks very bored about being in that suit.

Honestly, he looked pretty bored about being in that movie! :P

Nah, it's cool that you liked this figure, Ben, but I'm just not feeling it. The sheer size (and the enhanced detail it affords) is tempting, but there are just too many issues. While I think they nailed Cheadle's face (and expression! :P ), the mask of the helmet is off: it's like the "mouth" (the bottom) comes down way too low. Also, in some shots, his neck actually looks too long. And lastly, the ommission of the barrel detail at the end of the minigun, friggin' missile launcher, and ball-jointed shoulders are pretty inexcusable.

Kinda sad missed opportunities here. Great review, though, and thanks for the refresher on WM's comic origin!

Honestly I don't like the proportions on the DST ones as much. They seem too tall and lanky, and while that may suit the design of the Iron Man suit, I feel like War Machine should particularly be bulky in comparison.

It's still a nice figure though, good review Ben.

I think you'll find that the proportions are pretty spot on. It has all the right bulk in the chest, upper and lower arms, and legs where the armor was added. The neck might be a tad long, but as a figure that really helps. The figure is really hefty and bulky in person, but still manages to be quite posable thanks to some really good design work.

Looking at the picture comparison, yeah I can see what you mean. I think it was that long neck that was making me think the entire figure was more slender in general. I guess the neck's the main thing that gets me then. It does look good, there's no denying that.