The Walking Destruction Robot is featured in the final battle of the movie MEGAMIND, starring Will Ferrell and some other people too funny to be in this film. The movie is not bad, but not great – standard CG summer fare in my opinion.

One cool thing was the giant mechanical suit used in the films climax. Most of the toys for this movie looked terrible, but when we were Christmas shopping for the kids this one caught my eye. It was a big robot. It was kind of cool looking. It was CHEAP.

My youngest son (6) got it and the thought it was pretty cool, but was quickly frustrated with the figure’s inability to stand up. Also, we could not find a Megamind figure anywhere to fit in the cockpit. After a week of play it got discarded to the toy bin, never to be played with again. 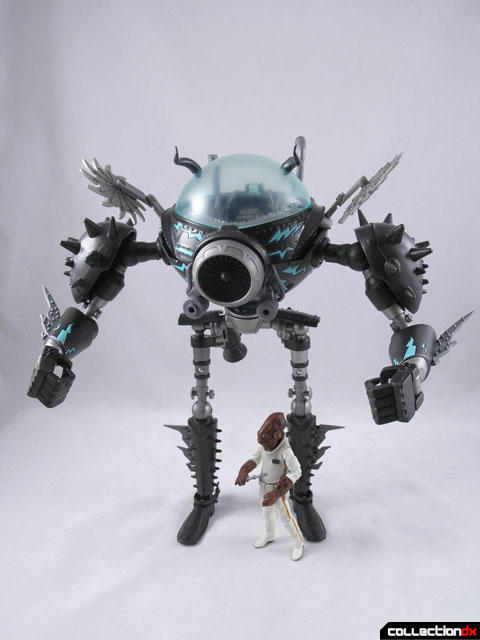 I managed to snag it for a bit go get some pictures, and although the thing looks really cool, and it’s got some cool detail, it has some major flaws that keep this from being a must-have item. 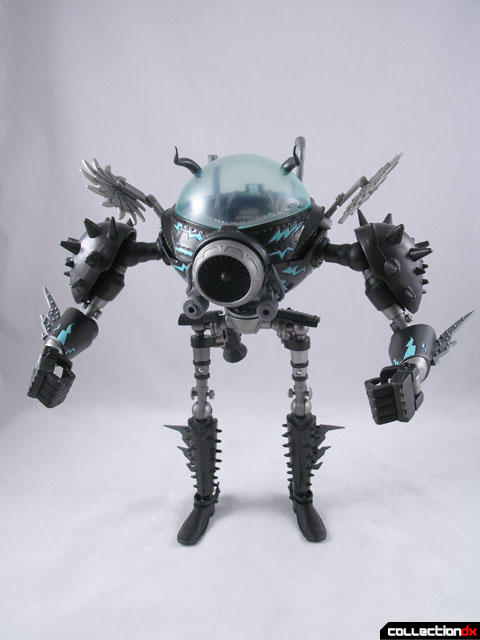 The big draw here is that the thing has a great design. It looks like if KISS built a robot, with lightning bolts, saw blades and spikes all over. It’s menacing but not threatening or evil. 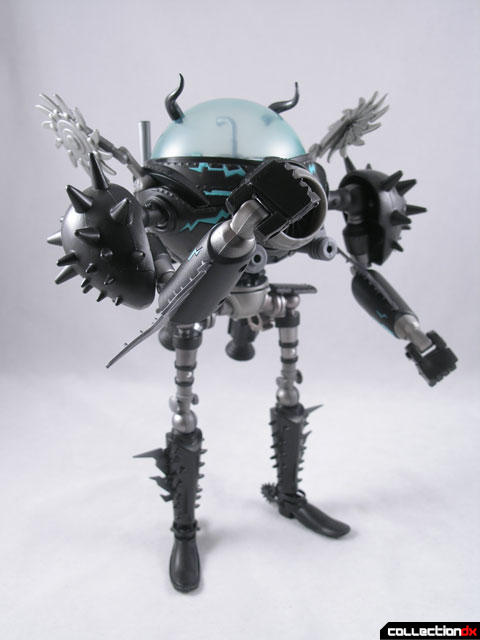 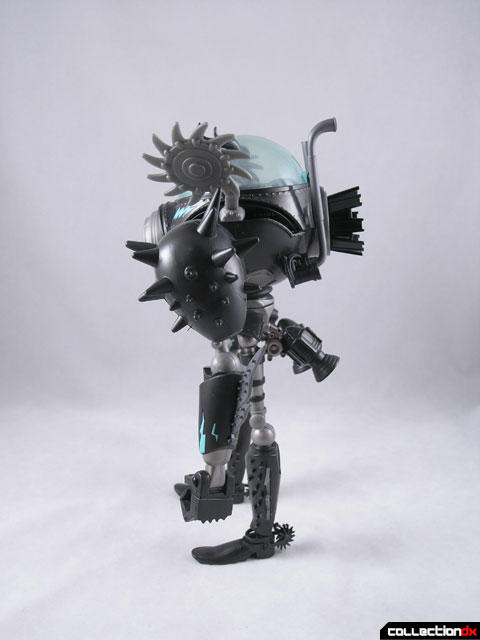 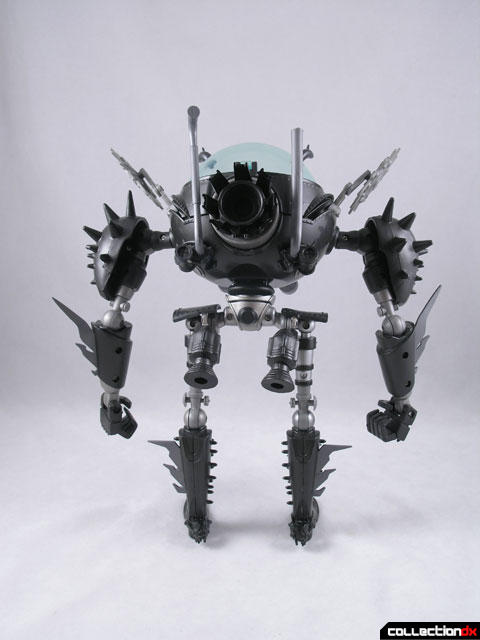 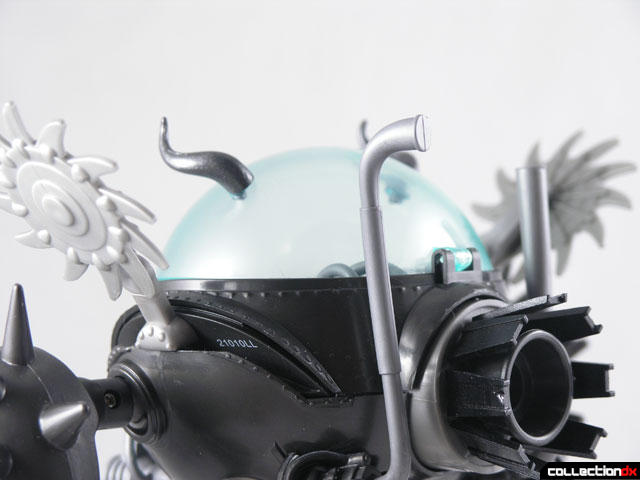 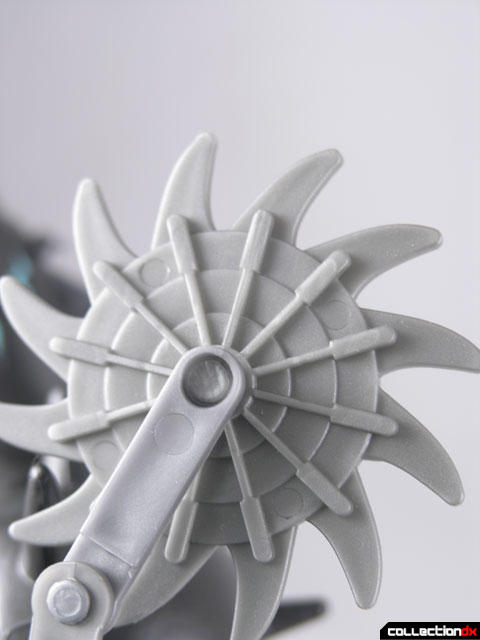 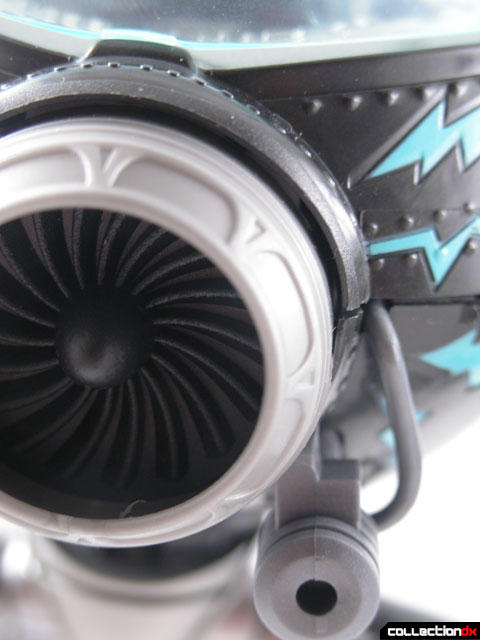 The transparent cockpit opens and is flanked by two articulated sawblades. Inside the cockpit there is little detail, but room for action figures of many sizes. The back of the cockpit features large exhaust pipes reminiscent of a hot rod. The cockpit can actually be separated from the rest of the figure like some sort of escape pod. A nice gimmick! 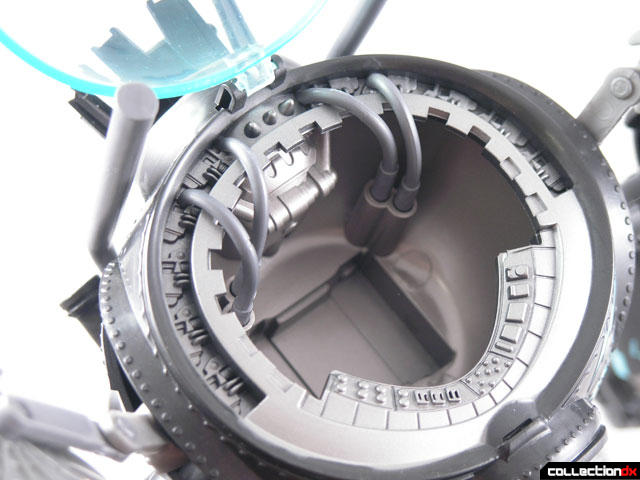 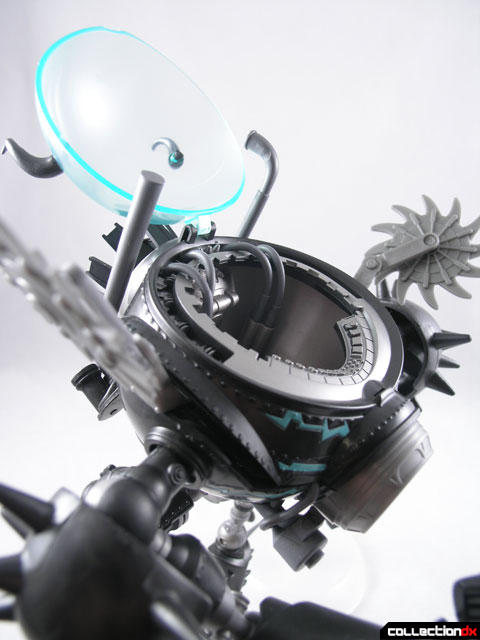 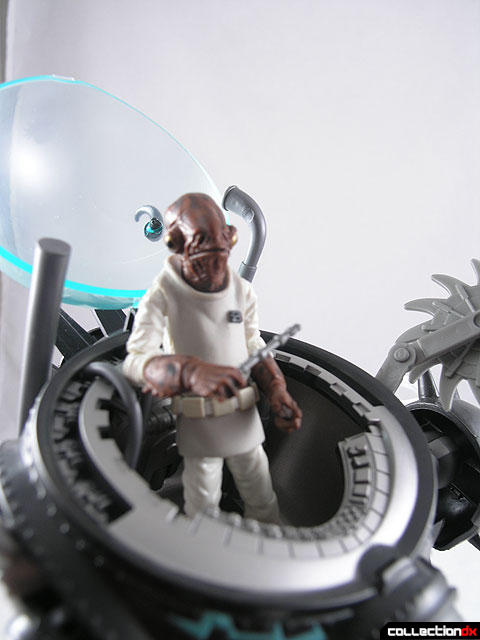 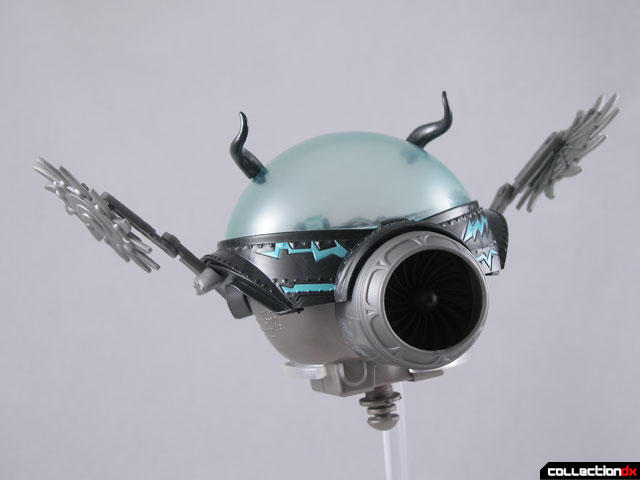 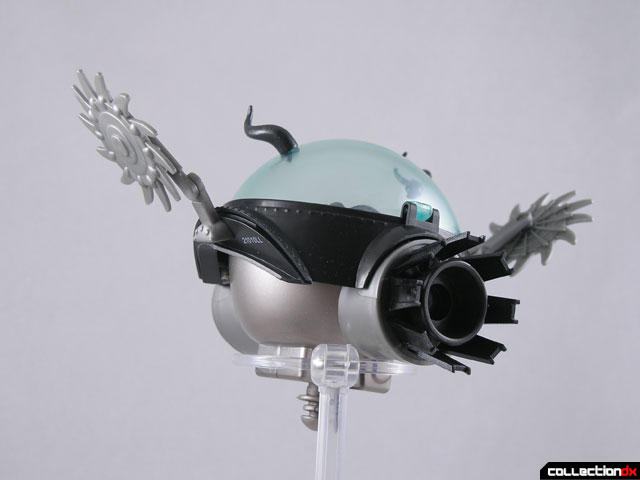 Shoulders rotate and swivel, the elbows bend and the wrists move but the fingers have no articulation. 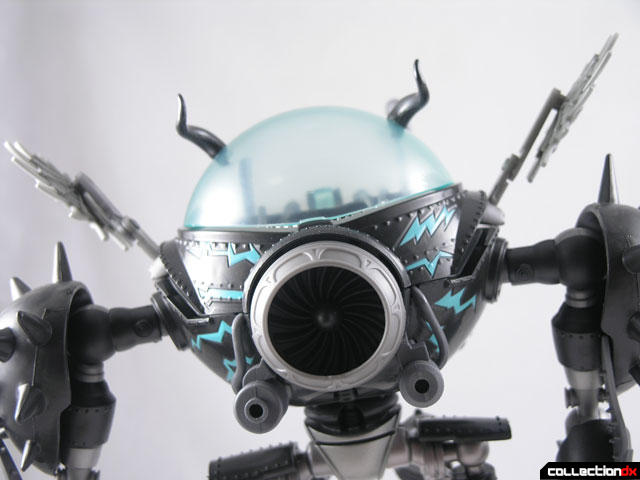 The legs move forward and back, and the knees bend, but there is no ankle joint. The knees are sort of weak, and the whole thing flops over rather easily. 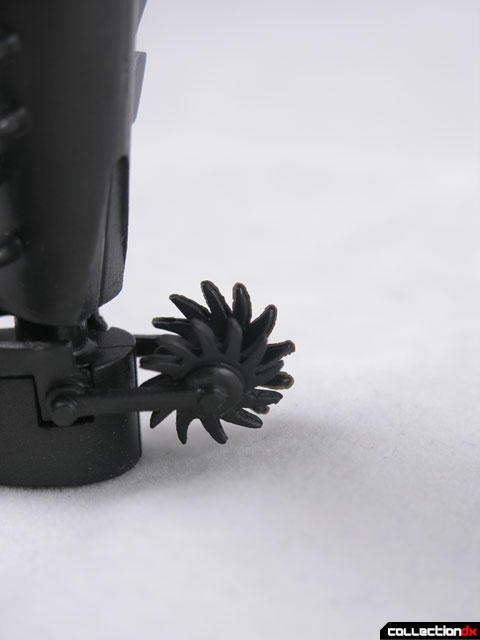 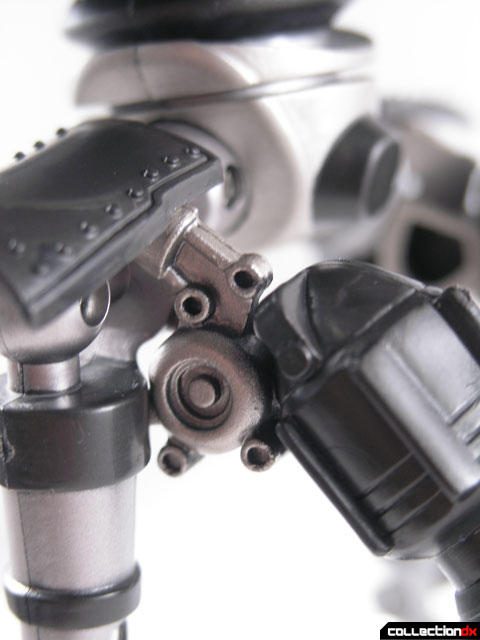 To alleviate the floppiness, the toy includes a clear stand that is useless. There are two components to this stand. First, there is a clear disc with a long support and a clear horseshoe at the end on a hinge. In theory, this is supposed to go around the waist just under the cockpit to support the toy. The problem is, it’s too tall! If you use the support, the feet don’t touch the ground. The manufacturers realized this, and also included two footprint shaped stands that the feet are supposed to fit into, but these are too short, and still, the feet do not reach it with the stand. You can use the footprint parts on their own but it won’t help the floppiness issue. 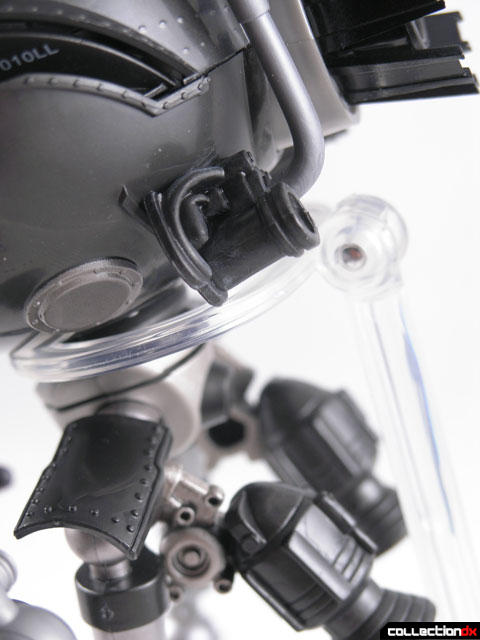 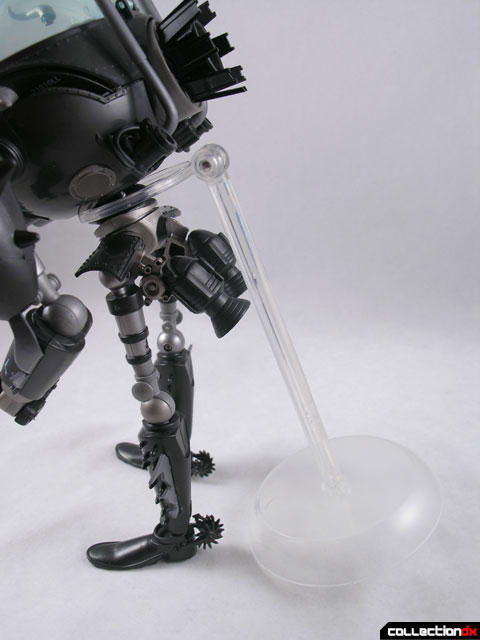 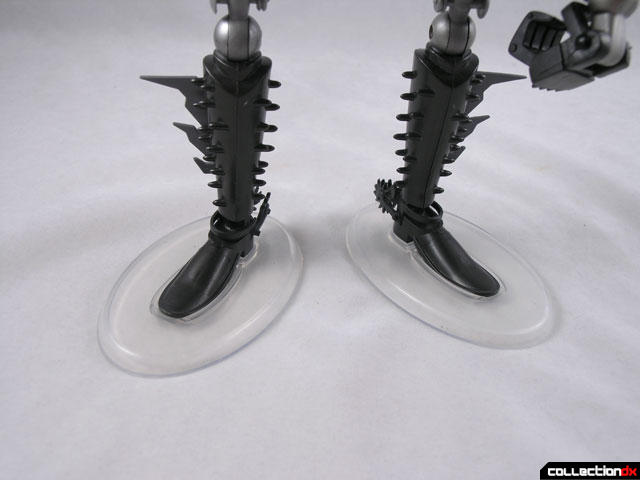 This was made by a company called Manley Toys who appear to make generic toys like squirt guns and yard toys. What they are doing making action figures and ambitions accessories like this I have no idea. They are in over their heads, and it shows.

In a different time, a license to a major movie like Megamind would have gone to someone like Hasbro or Mattel, but the sad fact is that most of these toys do not sell well. Unless it is a bankable hit, the major companies don’t want to take the chance. These licenses are now falling to smaller companies, or companies not well-versed in action figures, and what you get are products like these, bound for dollar stores and discount houses.

It’s too bad really. Can you imagine how great this toy would have been if Mattel got their hands on it?

You know whats funny? I just picked this up about a week ago and it really seemed like an awesome figure, it was big,cheap, robotic and had a cockpit. Must have. Then I realized while looking at it that it had a stand so I knew that it must suck at standing so I havent had the motivation to open it...much less after I read this review. I enjoy looking at what could have been from the outside of its packaging so I dont have to be disappointed if I open it.

P.S. I couldnt find that darn Megamind figure either.