Autobot Sea Spray made his first, and thus far only other, appearance in “The Transformers” G1 TV series. By today’s standards, he would be a Legends-class figure, transforming into a white, yellow, and blue hovercraft with twin propellers. That same figure was re-released during the G2 era in the early 1990s with the regular blue parts replaced with vacuum-metalized blue plastic.

Sea Spray’s box, which has upgraded the character (who was about as close to Hans Christian Anderson's "The Little Mermaid" as a Transformer could ever get) to be a bit more aggressive, reads:

“Many DECEPTICONS believe that while the AUTOBOTS may rule the land, the sea is safe. Those DECEPTICONS have never met SEA SPRAY. CRANKSTART thinks he’s safe hidden on a remote African shore, but he’s about to get the worst shock of his life. SEA SPRAY will come screaming out of the surf, turning the beach into a blasted wasteland with nowhere to hide.”

Sea Spray’s included Coordinate Code number will unlock one game on the Hunt for the Decepticons website.

He has four hidden ABS wheels he can freely move on a hard flat surface. While each turbofan does have an impeller, they do not turn easily even when you blow on them. Each turbofan assembly can spin side-to-side to imitate how Sea Spray would turn when in vehicle mode. 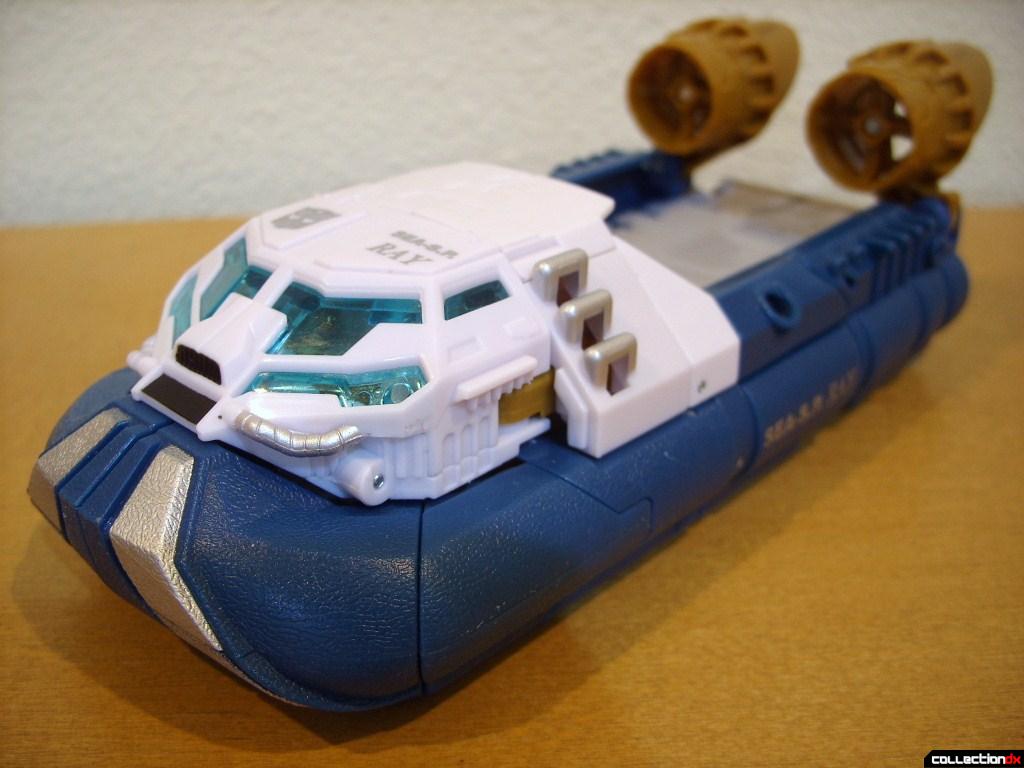 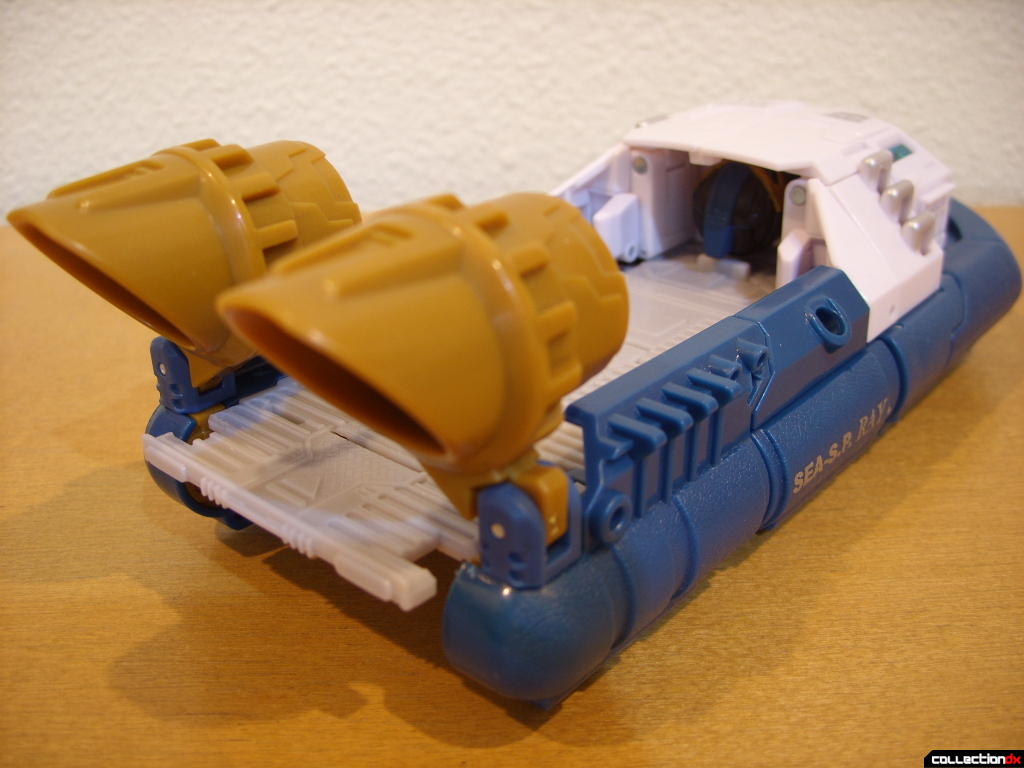 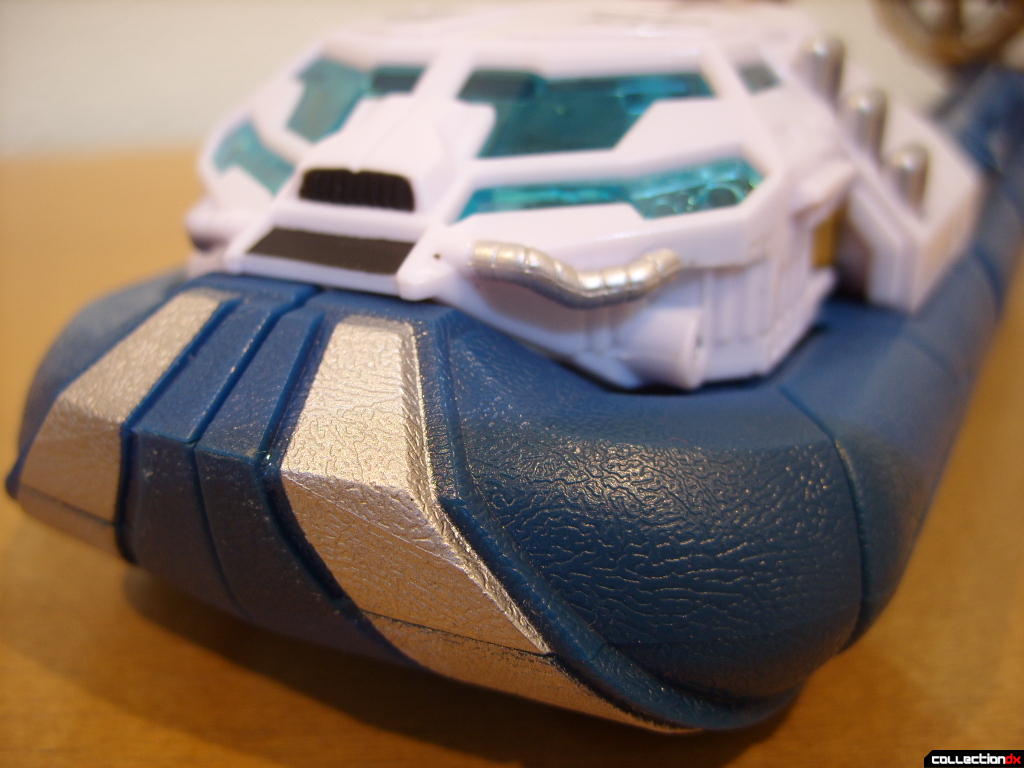 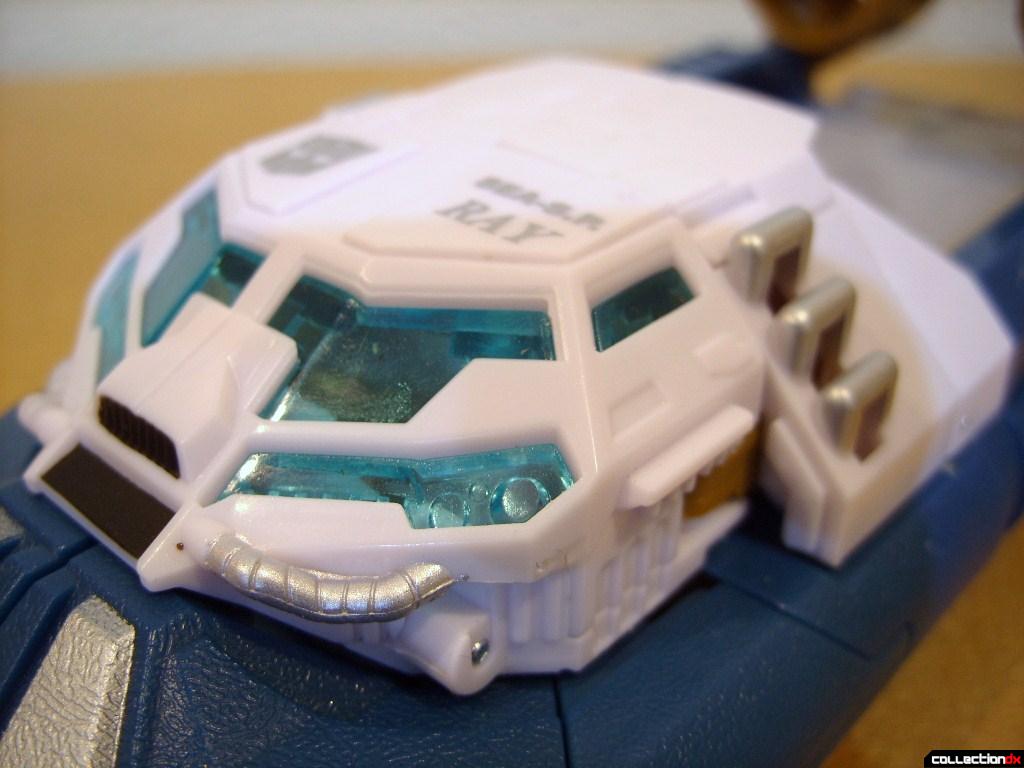 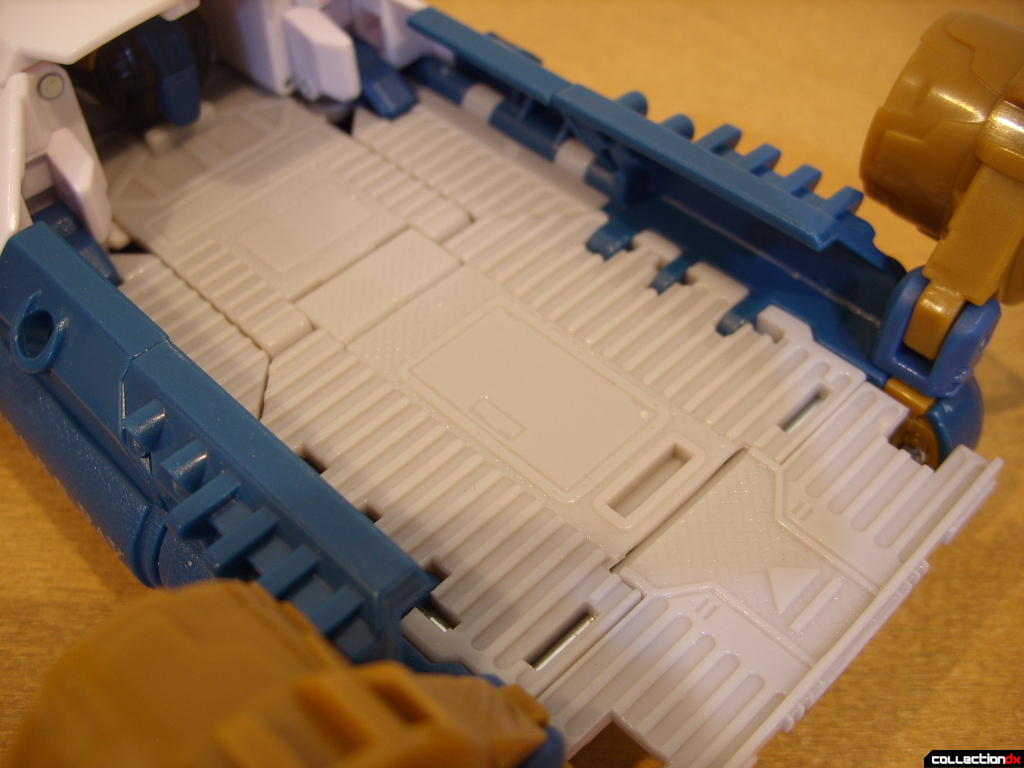 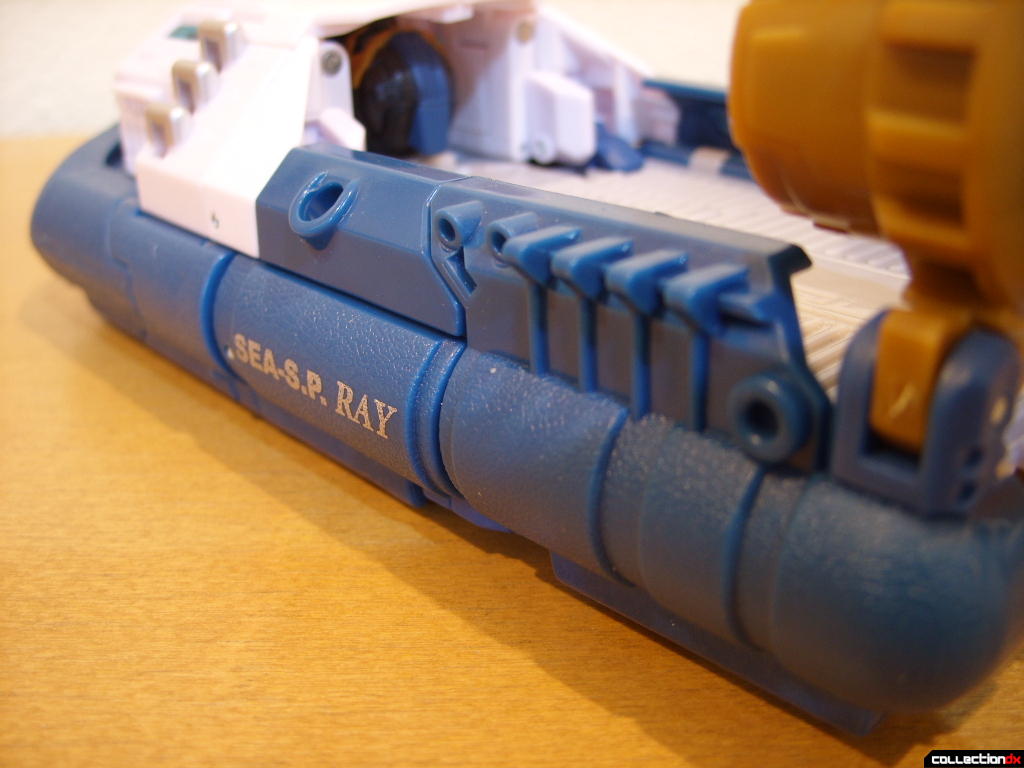 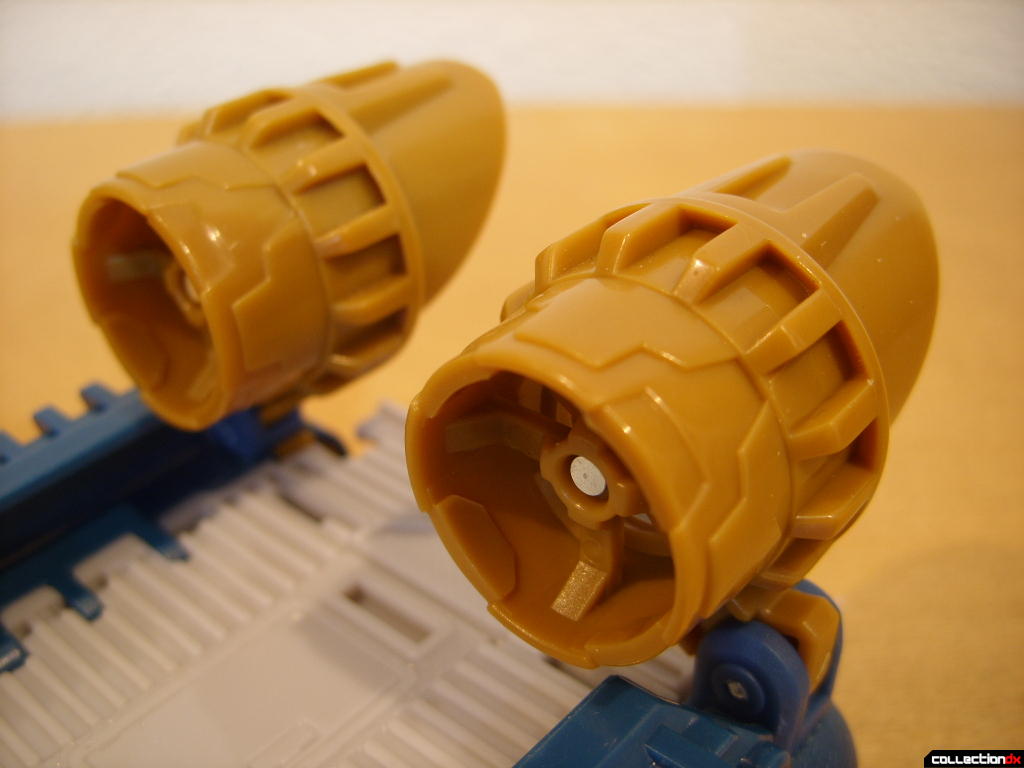 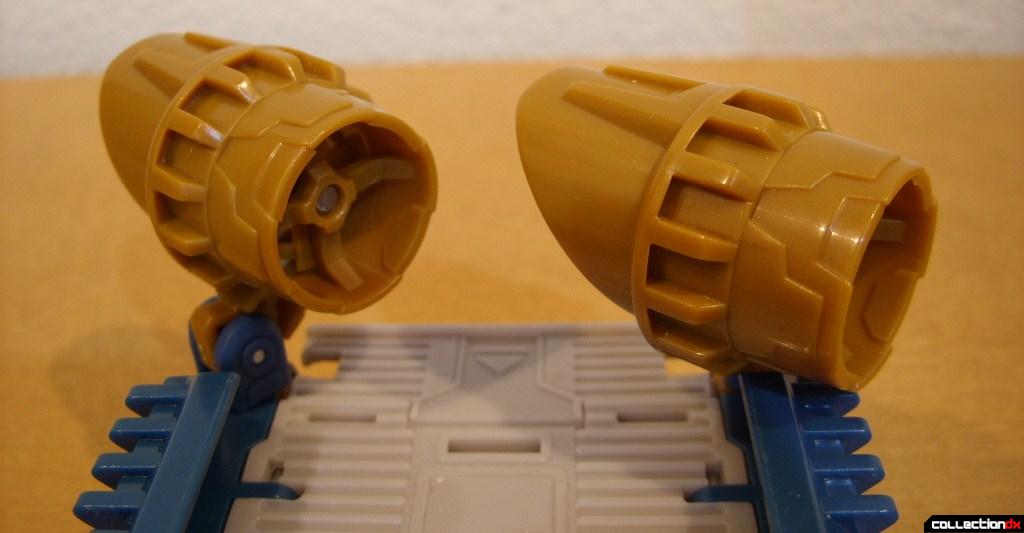 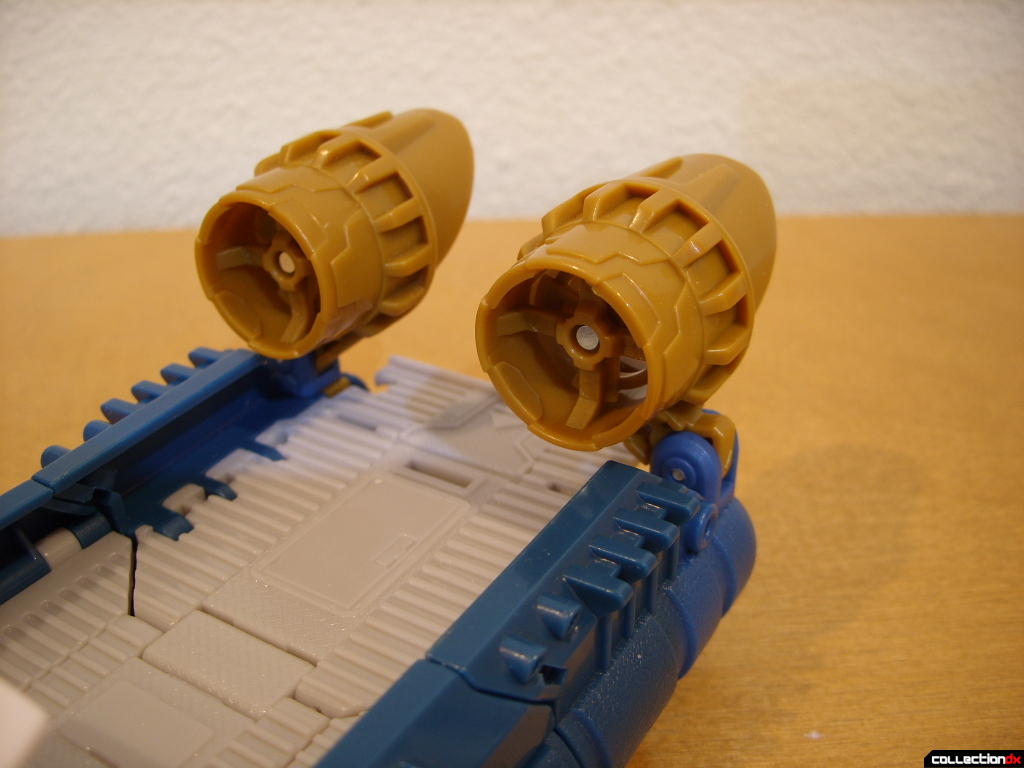 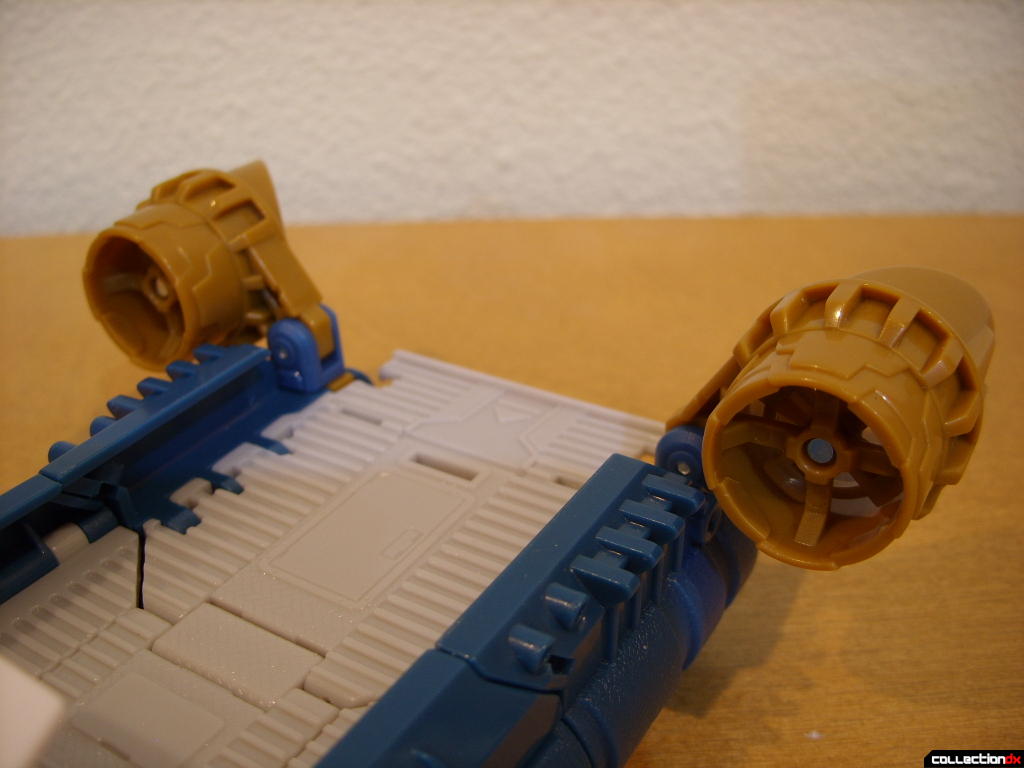 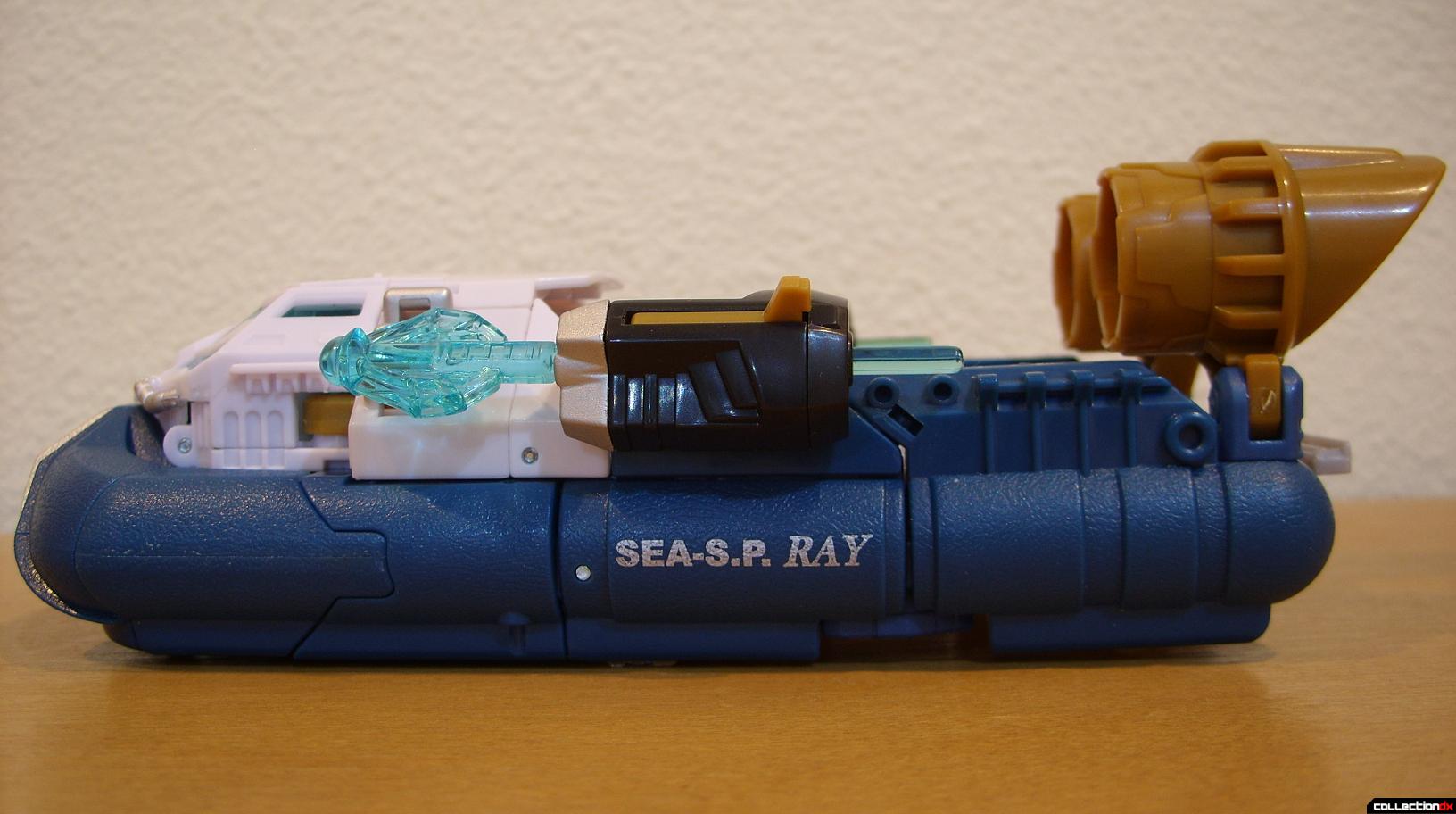 Two spring-powered harpoon launchers are provided, each with one projectile. These can be affixed to either side of the blue skirt just behind the main cabin. 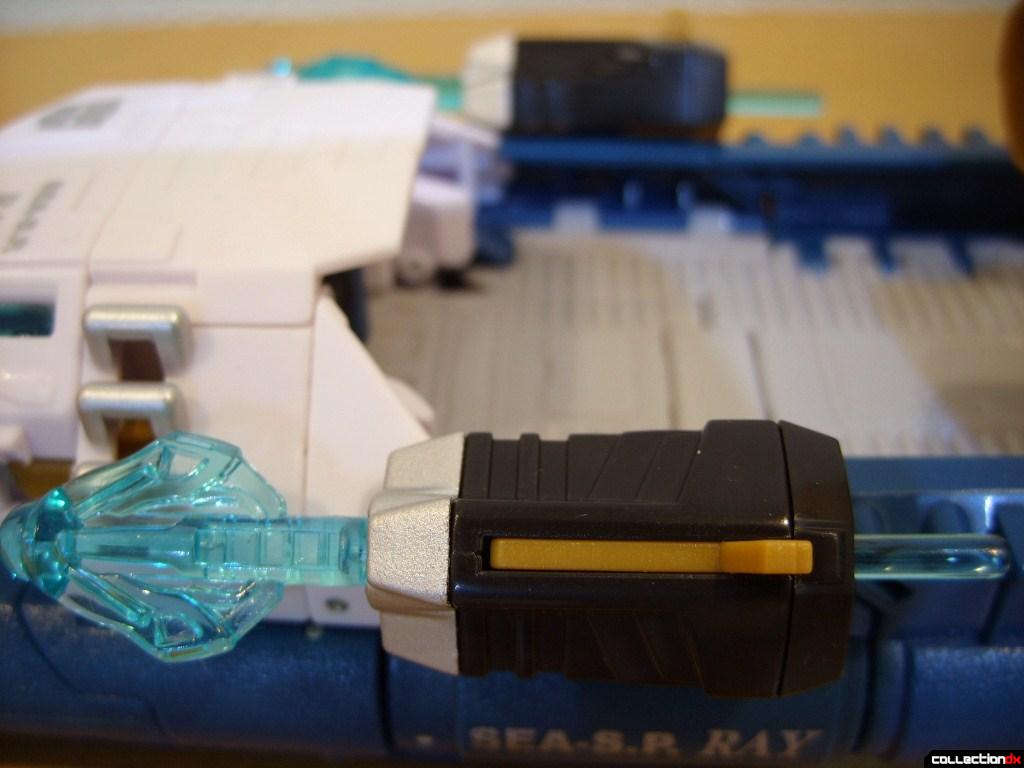 Just behind the side windows are some silver-painted bars. These act as connection points for weapons that can be swapped from other 2010-2011 Transformers sets, such as Deluxe-class Decepticon Darkmount.

There is enough space in back that Sea Spray can fit just about any Scout-class figure, including his previously-reviewed partner Scout-class Autobot Breacher. 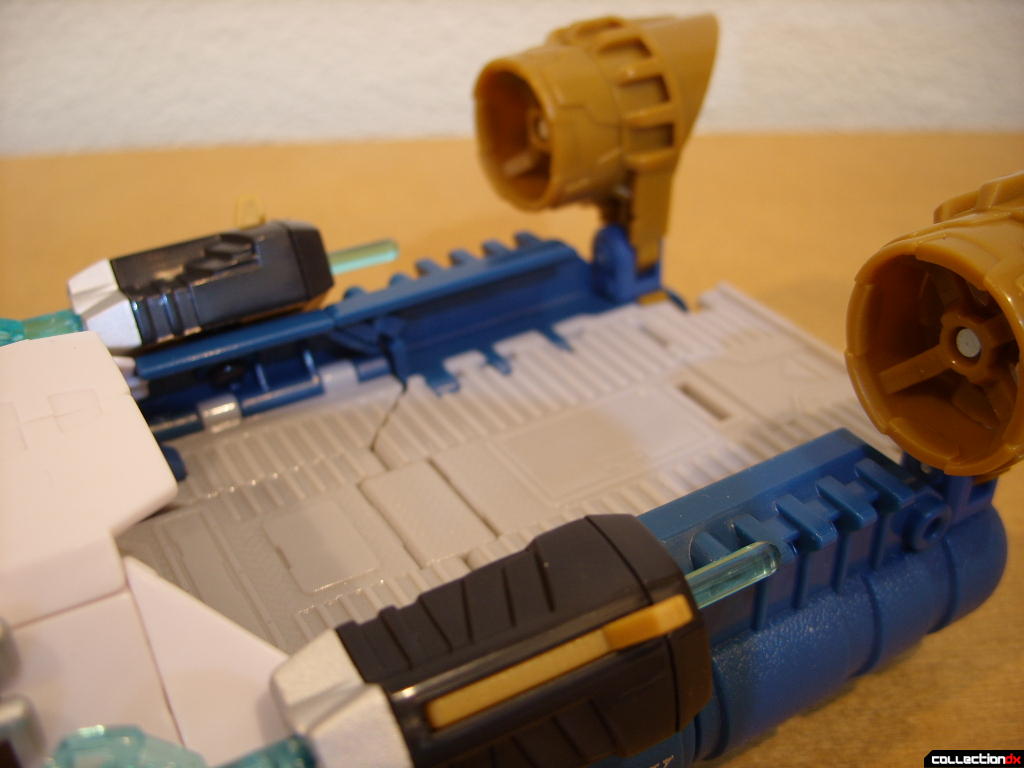 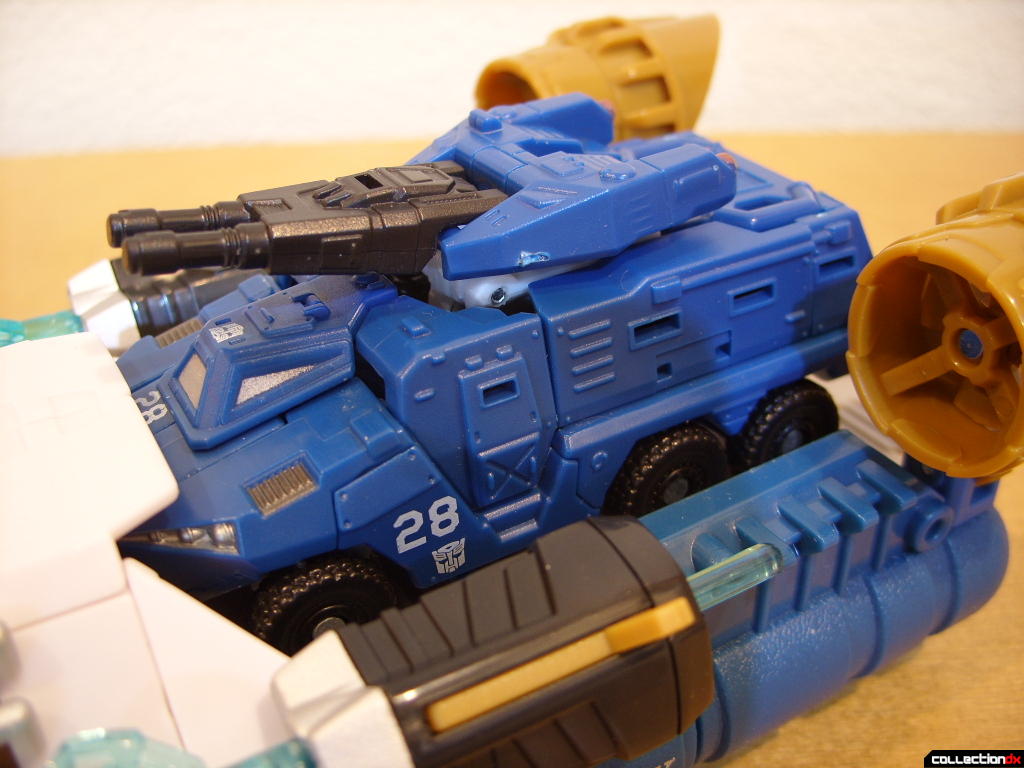 Sea Spray’s head can turn side-to-side, and as a bonus, when in Dive Mode, can be pointed up a little! Each ankle has two axes of motion, and the wrists can spin 90-degrees. Because of a pair of transformation pegs, his lower arms will never hang perfectly parallel to his upper arms. The hip joints, while they do ratchet, somehow still have a lot of give between each click. 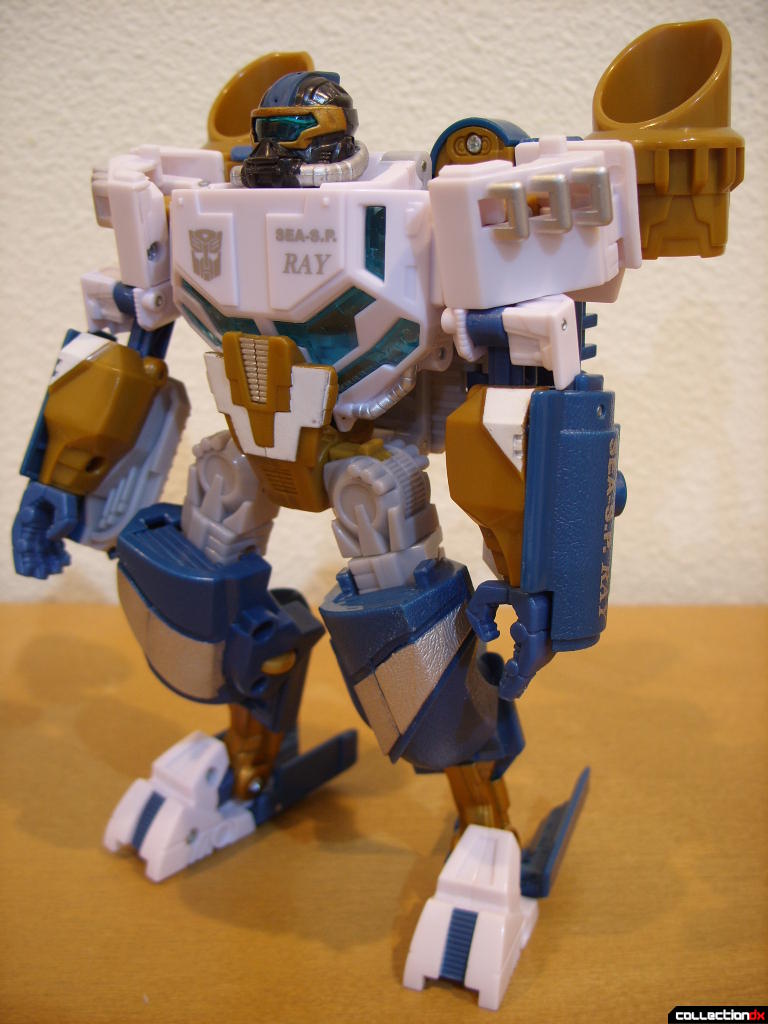 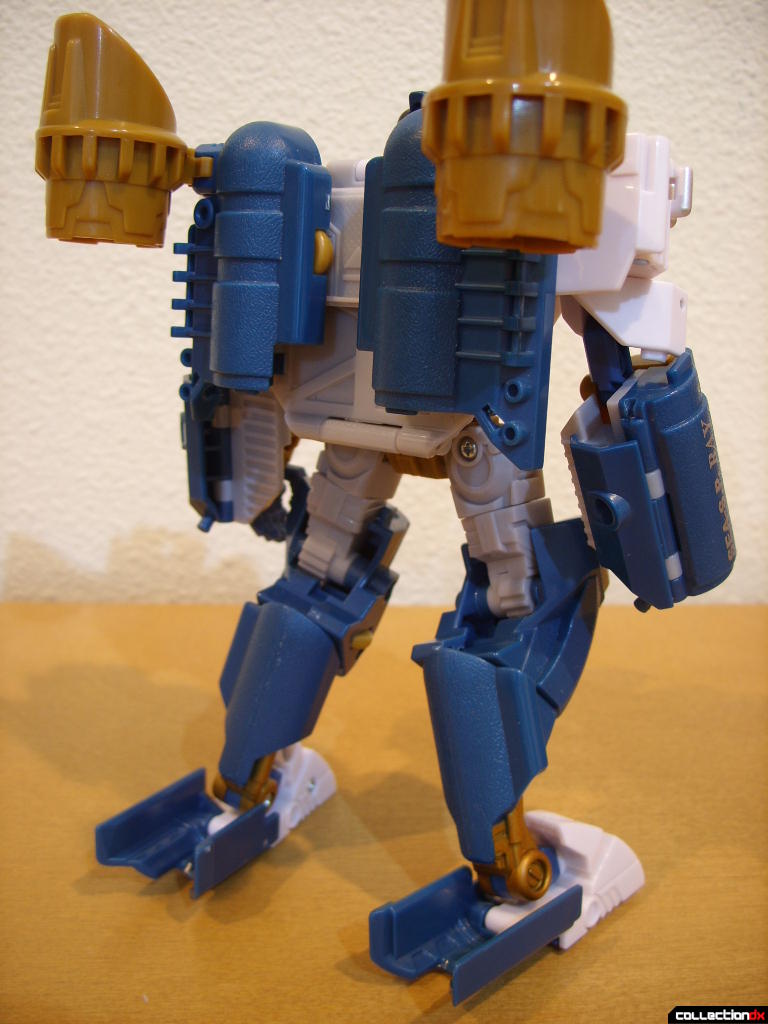 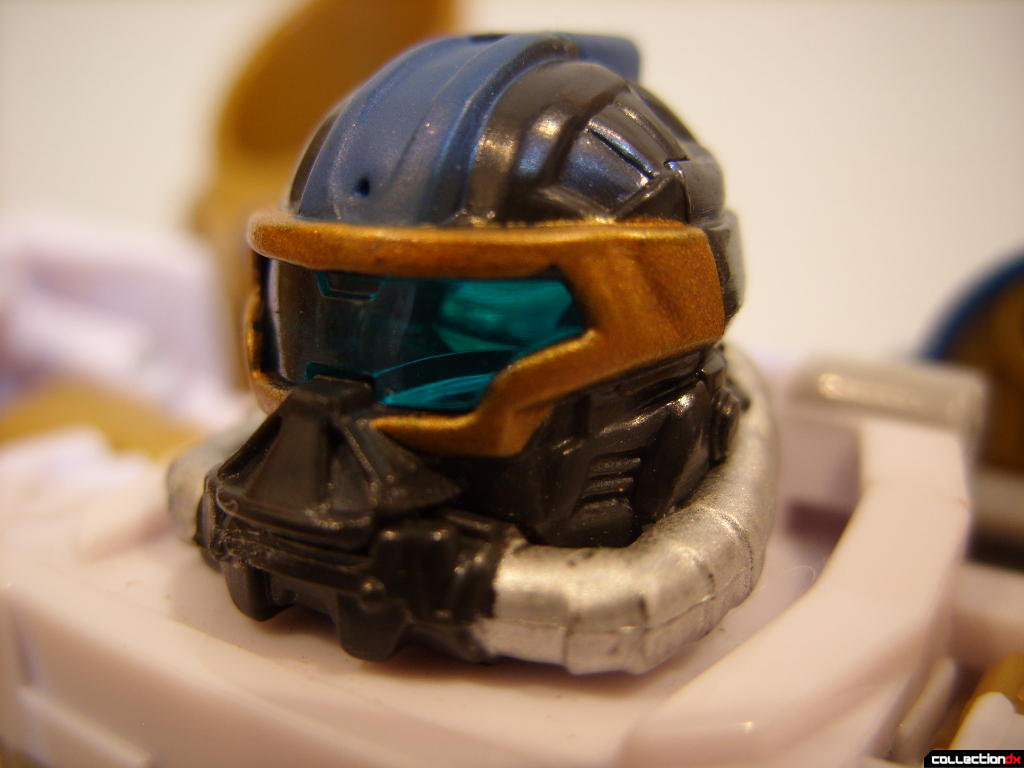 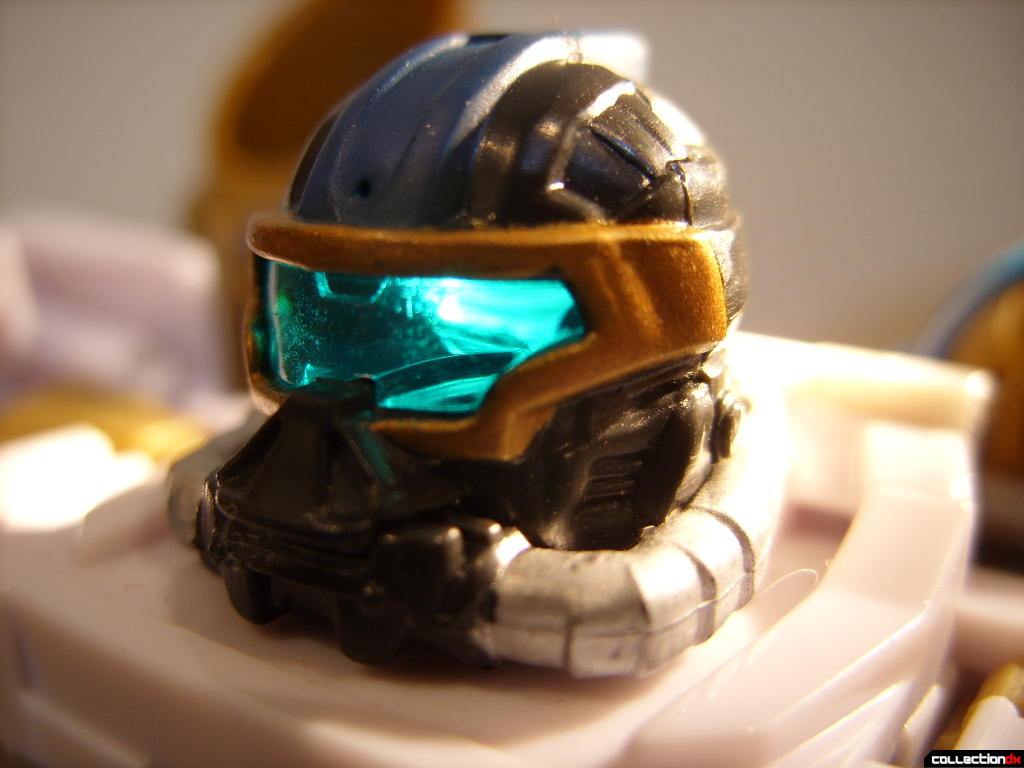 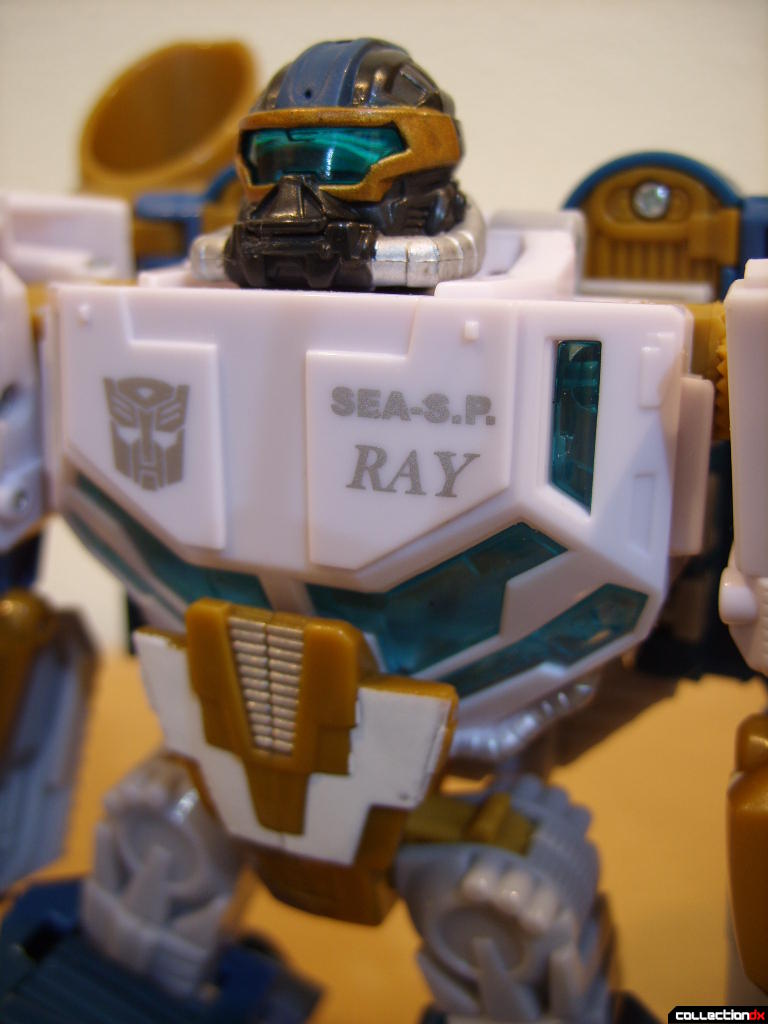 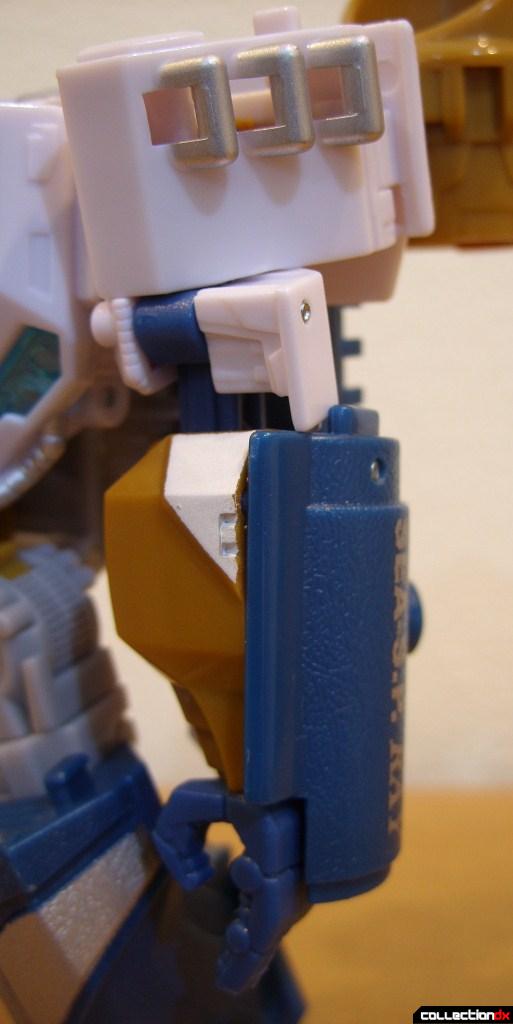 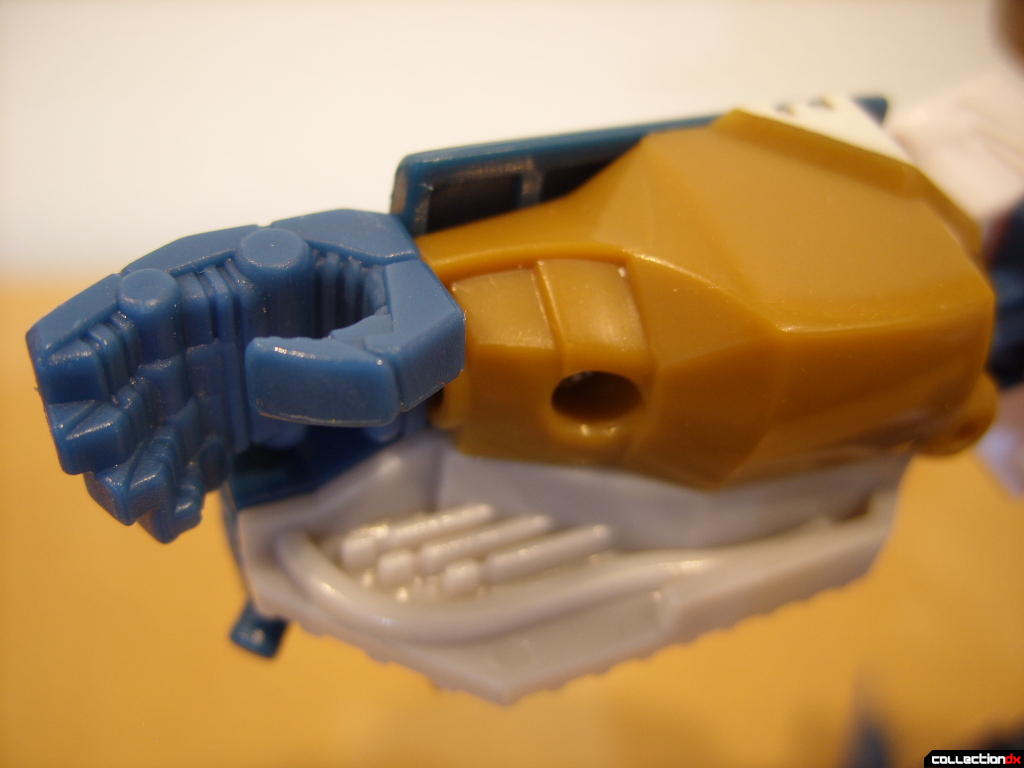 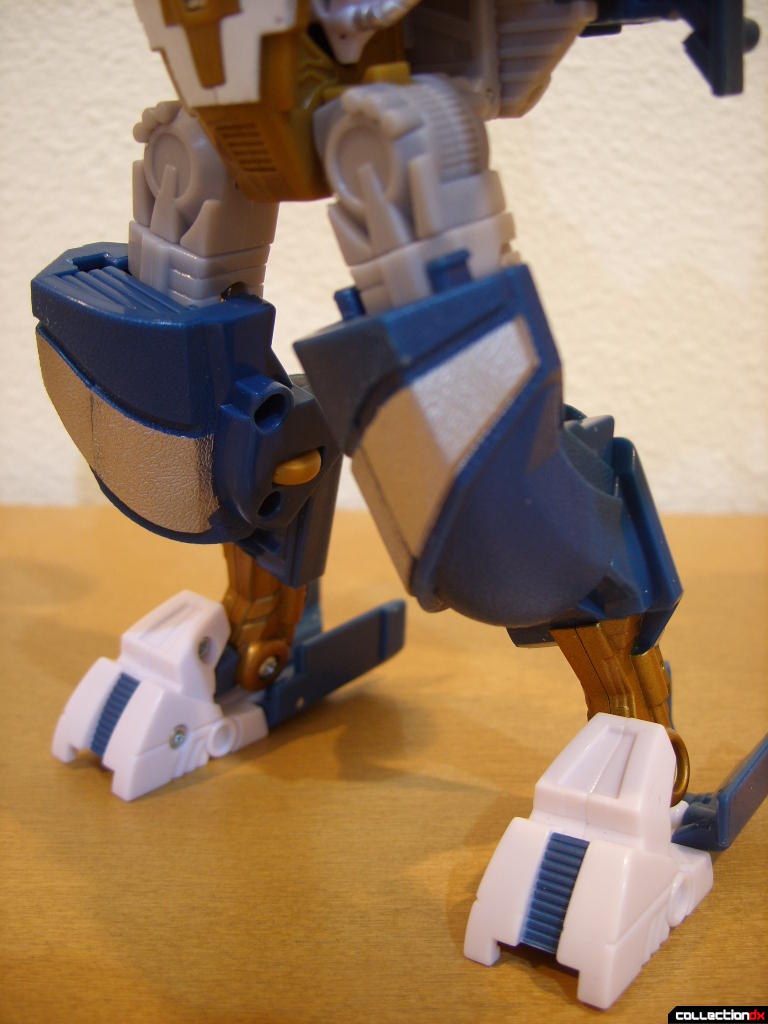 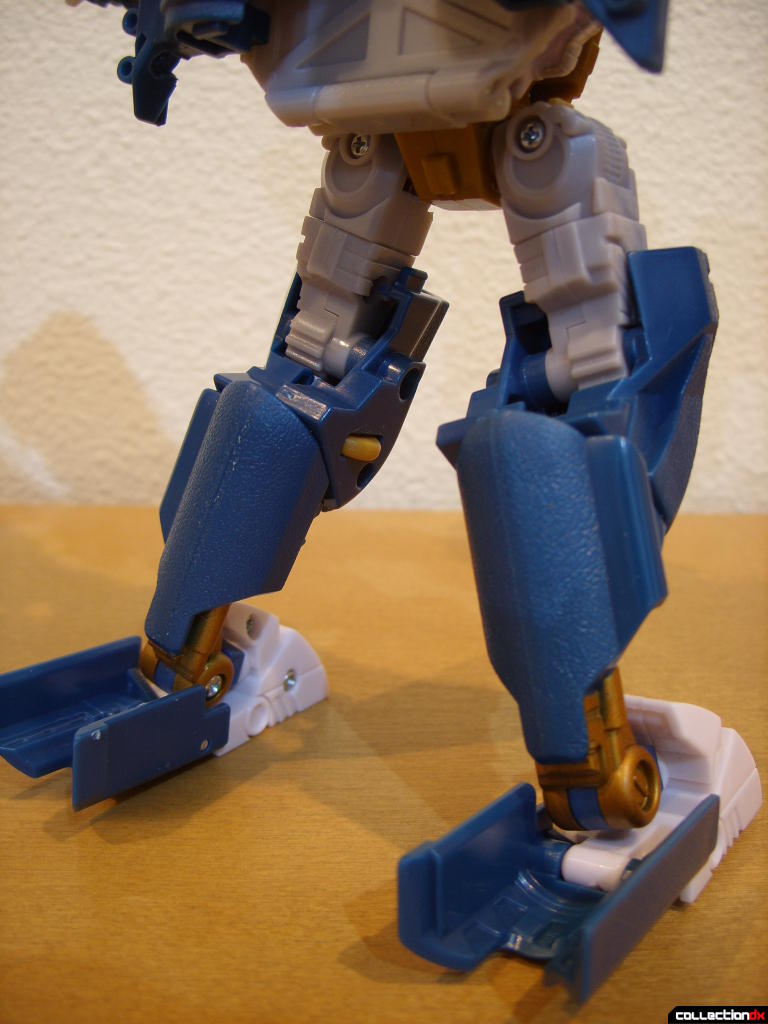 Each harpoon launcher can either be placed behind his forearms (the same holes they use in vehicle mode) or pegged into his hands. 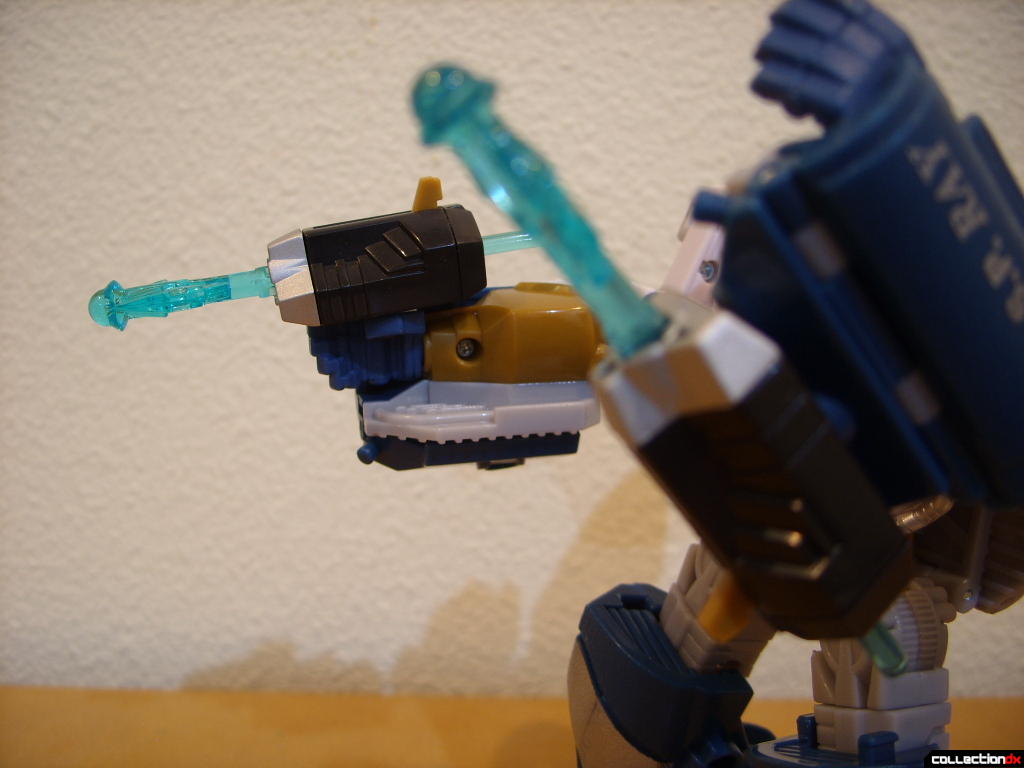 Technically this is a “mode” even though it isn’t that big of a change. (I doubt even Hasbro would go so far as to call this guy a triple-changer.) The turbofans are tilted at an angle, his head points upwards, and a set of hideaway flippers is revealed from under each foot! 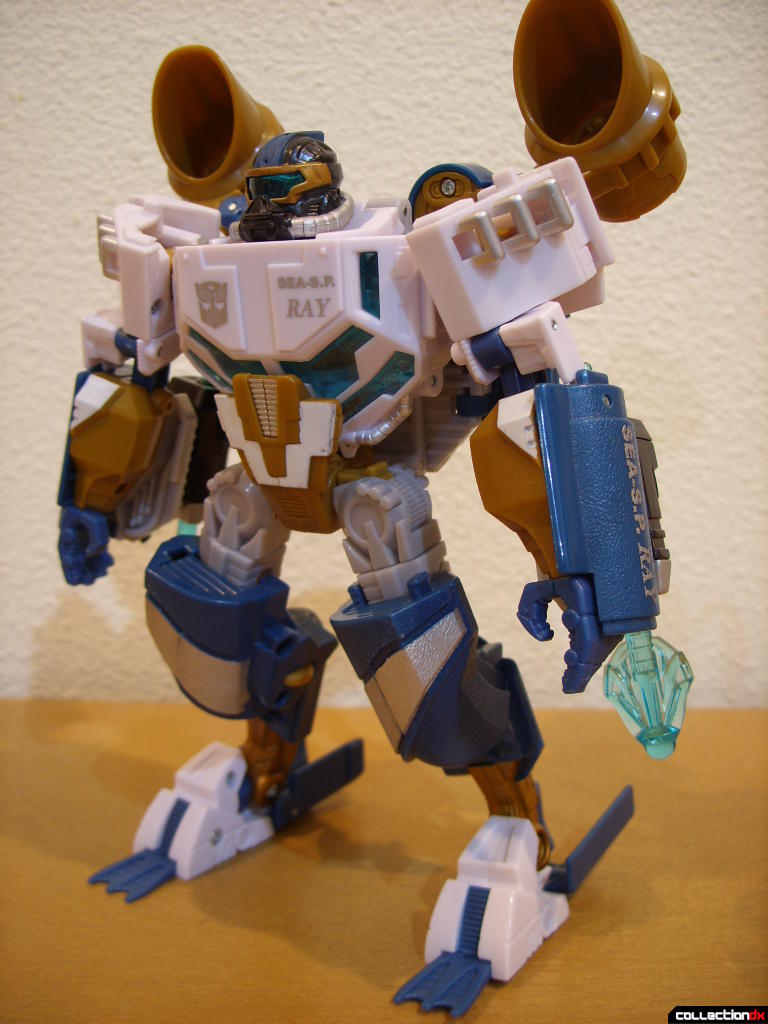 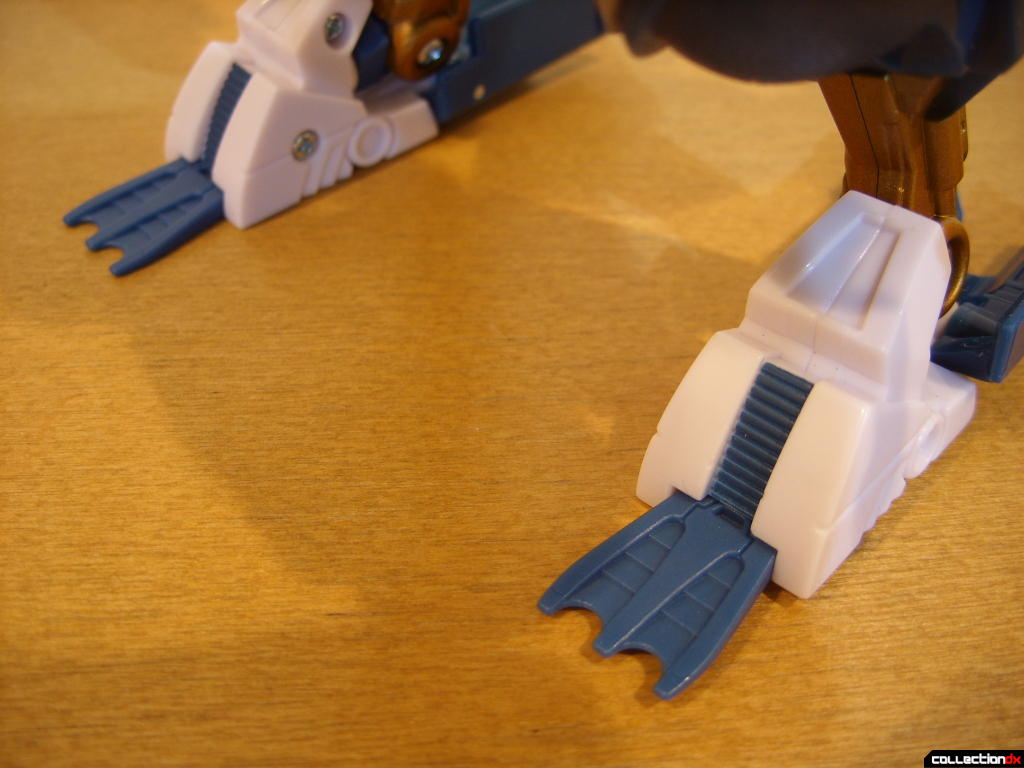 This figure is one of many in late 2010 & early 2011 that kind of dances on the fence between the classic Transformers aesthetic and functionality and that of the live-action Bayformers movies. It has a serious tone and attitude, but it lacks the insane walking-scrap-pile detail from the movies. 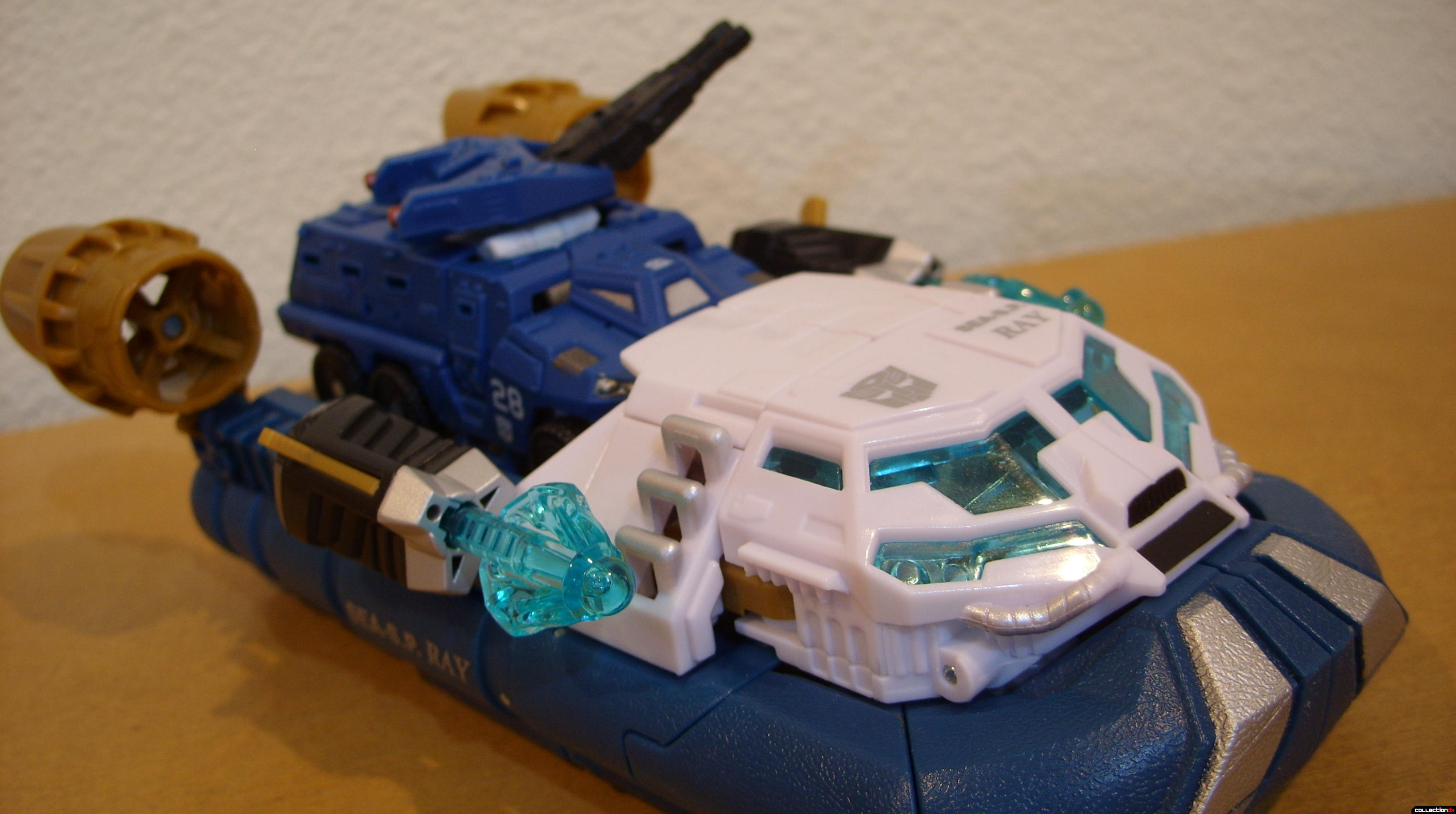 The vehicle mode is a simple hovercraft with space for a Scout-class figure, which was very nice of Hasbro and TakaraTomy considering we haven’t had a decent car carrier in years!
One thing that seems to turn a lot of Trans-fans (including myself) off is when the character’s name is not-so-subtly placed in plain sight. This guy’s name is placed not once, not twice, but three times on him, and all three are visible in both modes! How utterly lame and distasteful! I suppose the ones on the hovercraft’s air skirt could be thought of as a corporation’s logo, but… no, no. One subtle thing I really liked was the rough patterned texture across the skirt, very realistic.

While fitting the skirt back together can be tricky, by far the most difficult part is trying to figure out how to twist those legs around and get them to fit right on the nose! Pain in the ass, that.

Hasbro, TakaraTomy- THANK YOU for the ability to turn his head upwards! It’s not much, but it’s enough to get the idea across without depending on a ball joint. Oh, and crazy light piping mooneye visor too. Perhaps one of the biggest indicators that this could fit into the Bayformers universe was how he kind of has those bird-like lower legs. Articulation is pretty good, but I was surprised how small his elbow parts are- just a pair of thin blue pieces. It’s not fragile, but considering how buff he is everywhere else… It’s also kind of lame how he has wrist articulation but it doesn’t do much. You have a choice of where to attach the harpoon launchers, which is nice. Those kibble panels behind his heels are useless and cumbersome, but can’t be retracted because it would interfere with his ankle joints. The flippers are cute but small. I suppose I should have laughed that they were even there (I did when this figure was first announced), but I must be picky and say they’re too small to get this guy anywhere fast. The legs are nice and shapely, but I am really surprised that with all the quality in this toy, those hip joints can give so easily; that’s a real big letdown. And- my god- those harpoon launcher triggers are dammed sensitive! (Inside of the first five minutes of opening him, I accidentally fired them eight times!) They have awesome range and force when they hit; a nice decent projectile weapon that somehow slopped past the QC guys at Hasbro, thankyouverymuch. 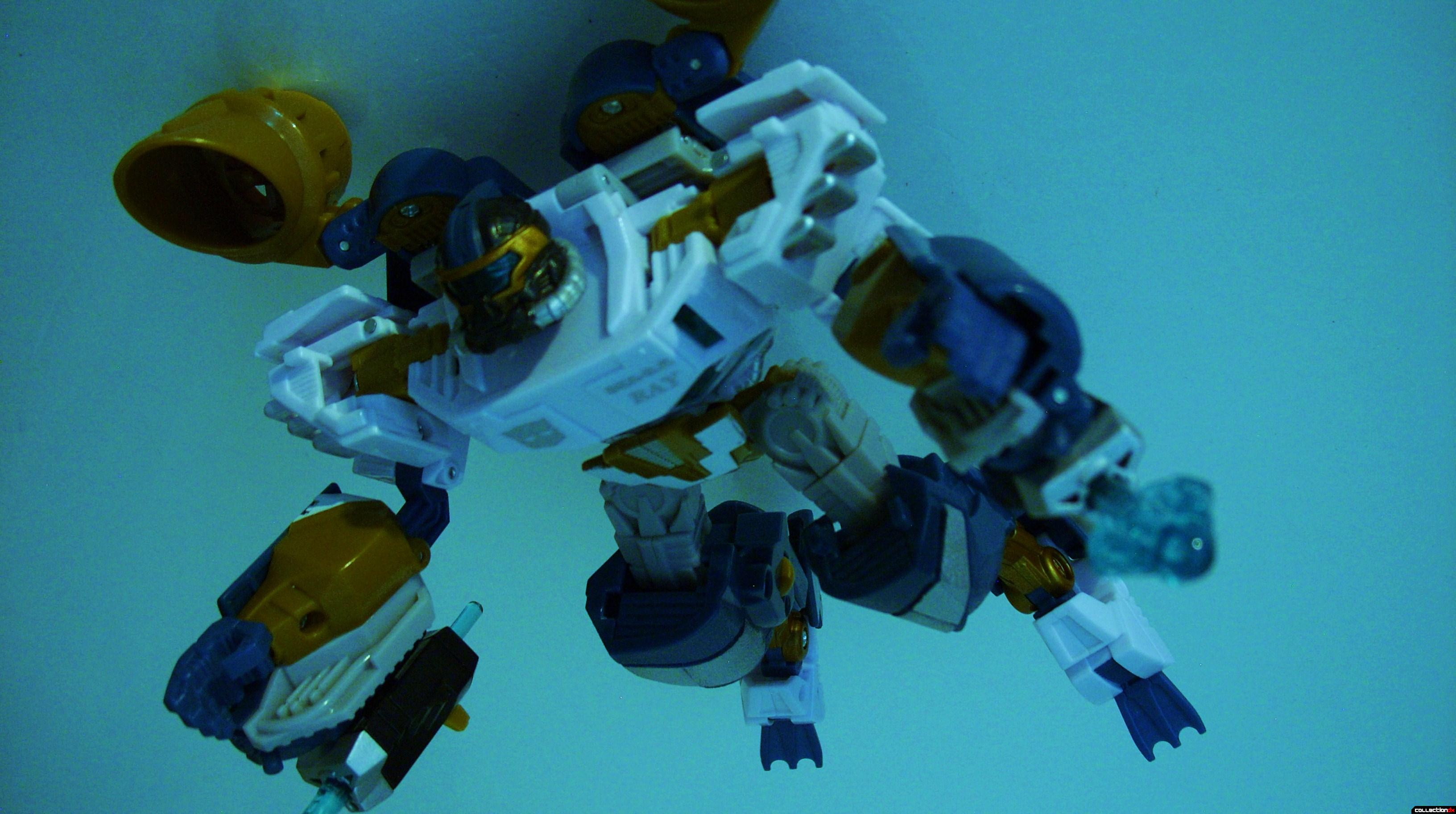 A much needed and well-deserved upgrade for the little-hovercraft-that-could. Voyager-class Autobot Sea Spray is also in one of the most unique positions of any Transformer ever made: he can carry his predecessor right on himself. Not even the mighty Optimus Prime can make that claim. Strongly recommended!

6 comments posted
On a roll

We got Powerglide a couple years ago, now this guy's on shelves, Warpath's on the way (allegedly)... now all we need is Cosmos and all the Generation 1 "Mini-Bots" will have faithful upgrades.

I would simply adore a really well done Cosmos. That dude had chutzpah!

I wouldn't mind a decent flying saucer-bot. Only one I have right now is the Astro Megazord... and that doesn't really count. I hope they do Cosmos in Bayformers stylie! <3

I had seen dude at Target, but was kind of iffy on it... but I may give him a second hard look b/c your review really makes him look good.

And then we're getting the new HftD scout (erm, voyager or whatever it's got Wheeljack) wave. I think it's great they're sneaking in a bunch of the late Animated figs too. Such a good time to be a Transformers collector.

Even though they were side-by-side, I decided to go with Animated Cybertron Mode Ironhide today instead of Ratchet. Mostly it came down to coloring rather than personality. (Ironhide's quote is simply "Yee-haw!". I LoL'd.)

I guess that means I'm skipping a Ratchet figure for a complete series again; only one I have is Bayformers-1 Ratchet... and I kinda regret getting him 'cause it's not that screen accurate.

Hey EVA, first, sorry about blowing up your surprise on Breacher's review, I didn't know you intentionally omitted those details.

But hey, good news, the new repaint of Breacher was revealed today at HK-TF, the repaint name is Bodyblock and it's colored to match the new Sea Spray repaint, named Deep Dive.

BTW, on the few Deep Dive's pictures shown so far, it looks like it doesn't have the name printed everywhere like Sea Spray does, oh, and I just noticed that BBTS has Deep Dive in stock right now.