You may (or may not) recall that when I did my review of the Giant Commander Voltron from LJN, I mentioned that there was a Korean knockoff of the Popy Golion Jumbo Machinder. I first saw this bootleg Golion jumbo from Korea probably about five or six years ago and at the time it was a revelation. No one had ever heard of it before and it was only the third Korean produced jumbo machinder to surface. (King Of The King and King Man were the only two others known to exist at the time. Another, a knockoff of Grendizer, had been seen in photos but no specimens are known to exist even now.)

When the King of the King was first discovered, several specimens were sold. Then there was a long wait before more showed up, but when they did, several surfaced again. The hope was that the same, or better, would happen with this toy and it would be something that was obtainable. Unfortunately, it was not to be. After awhile, I almost stopped hoping that I would ever obtain this toy, but this hobby has many interesting twists and turns and you never know exactly how things will play out. I've had some good fortune along the way, but the manner in which I managed to come by this toy might be the most fortuitous yet.

Do you remember the Korean Combattler bootleg that I got last year? Now, that was a pretty interesting story itself, but as the next couple of months unfolded, it got even better.

After the seller of that toy sent it to me, he told me that someone from Korea was emailing him and asking to buy the toy, even after being told that it was no longer in his possession. Apparently this Korean person really wanted it and kept offering more and more money. I considered how lucky I was that the seller had accepted my offer and sent me the toy right away, but then I put it out of my mind. However, about a month later I got an email from the Korean guy asking me if I'd sell it! He must have been still pestering the original seller and gotten my email address from him.

So, I struck up a dialogue with the guy. I half expected him to be a lunatic of some kind, but he turned out to be pretty nice actually. He just really, really wanted the toy because it was something he had as a child. He made several monetary offers to me for it, but I told him that I was not interested in selling it. I explained that, since I was not in Korea, the likelihood of getting another one for myself was pretty slim. There were, however, some other toys in Korea that I would happily trade it for... 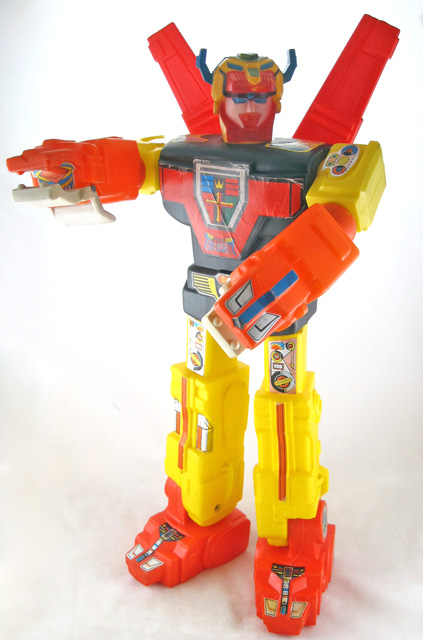 Of course, I asked about the Korean Grendizer and also the toy reviewed today. He explained that it would be highly unlikely to make such a trade as there were no known specimens of the Grendizer toy and only one of the Golion bootleg, but I remained steadfast. I was not giving up my Combattler without getting one of those toys in return!

Remarkably, a few weeks later I get an email saying that he had managed to acquire the Golion by trading lots of rare model kits from his own collection. Naturally, I offered then and there to make the trade, but he declined. However, I knew I had him. When I first asked about this toy, he told me he knew the owner of it. So when he only made the effort to acquire it after I asked about it, I knew he wanted to work something out involving the two toys. Sure enough, about two weeks later, he makes a counter offer, an agreement is reached and the trade happens. Both parties ship their prized toys via EMS and finally, not one, but two grail tales are complete! 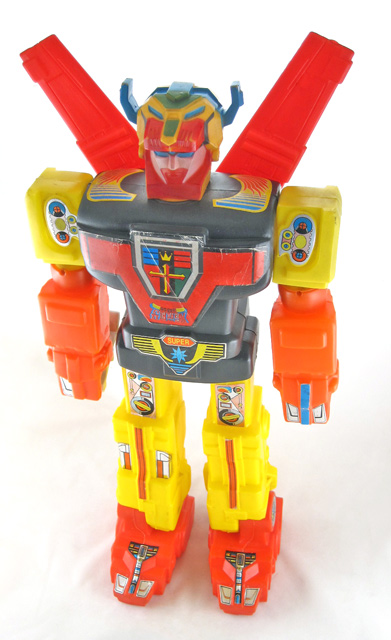 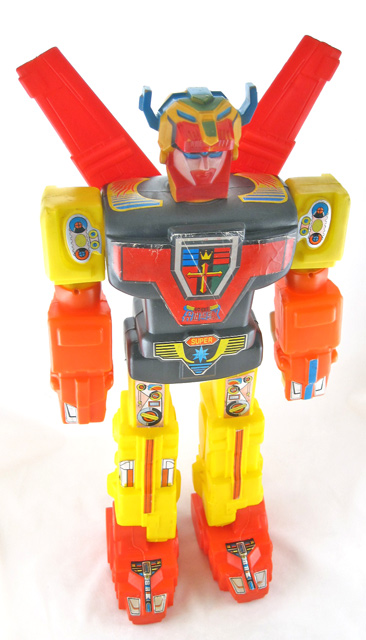 Now let's talk about the toy for a bit. Obviously, it is a knockoff of the Popy Golion Jumbo Machinder, but it's got some pretty interesting modifications. The most glaring change is the colors. This version eschews the traditional colors in favor of a more balanced yellow and orange scheme. Also, the left arm is now the same as the right arm. The original, of course, had a more rounded green lion. 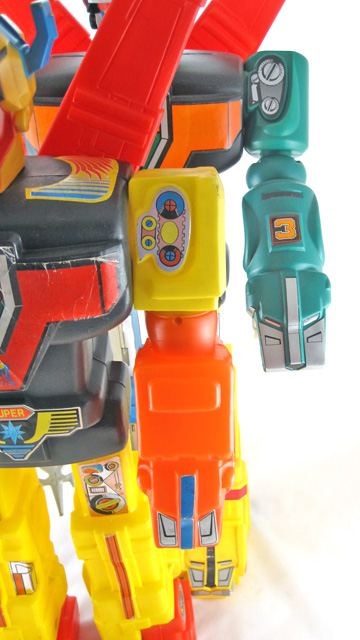 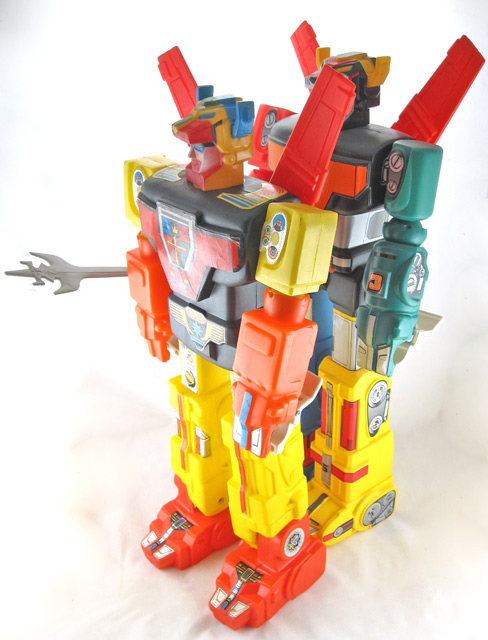 Perhaps the most interesting alteration happened on the feet. For some reason, there is now a hinge that allows the feet to fold in a manner very similar to the Voltes V and Combattler V jumbos! I have no clear idea why this was done, but if I had to make a guess, I would say that it is to allow the robot to lean forward on all fours, as if it were one big lion! If this is the case, it would have been great if the head was also on a hinge like the Jumbo Machinder Grendizer. That way it could look up properly. Alas, it cannot. While this new feature is unique and interesting, truthfully, it tends to make the toy lean forward a little bit so you have to be careful to keep it as straight as possible so that it doesn't fall forward. 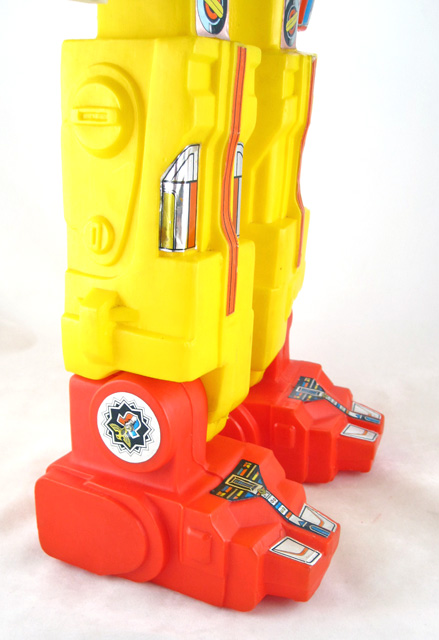 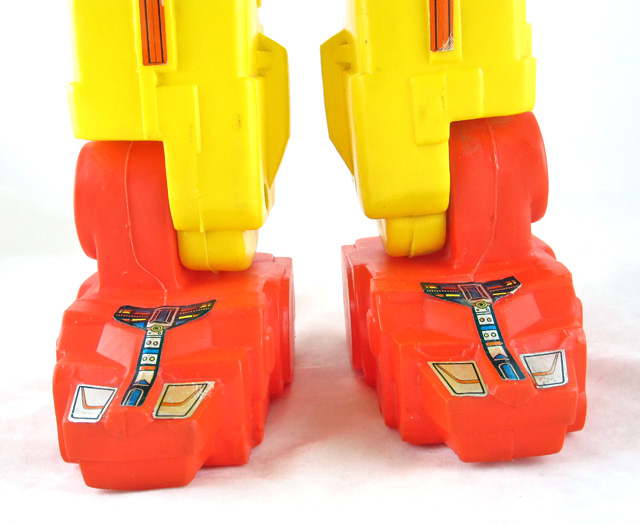 Another interesting change is that the legs have been modified and inverted. The connection point where the top of the legs meets the pelvis is now slightly angled instead of horizontally flat and the molding that exists on the interior of the legs on the original is now located on the exterior of the legs. Check the picture below to see the difference. 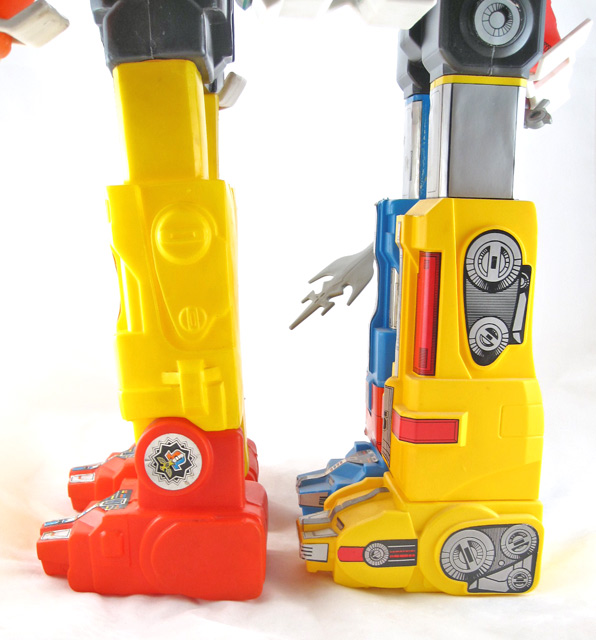 Lastly, the toy has some pretty interesting new stickers. There are stickers depicting the folded lion legs on the front of the legs as well as some stickers that seem to represent teeth inside the hands. 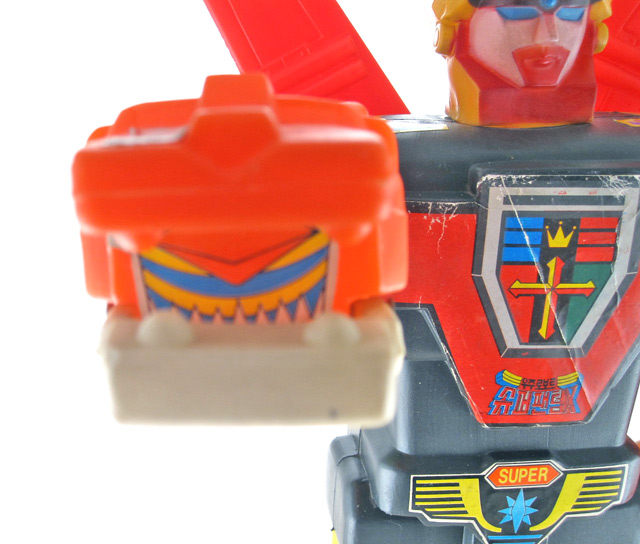 Probably my favorite new stickers, though, are the ones on the shoulders. I'm not sure why, but I think that they just add a whole new level of "cool" to the toy. Something about them just really brings out "the funk". 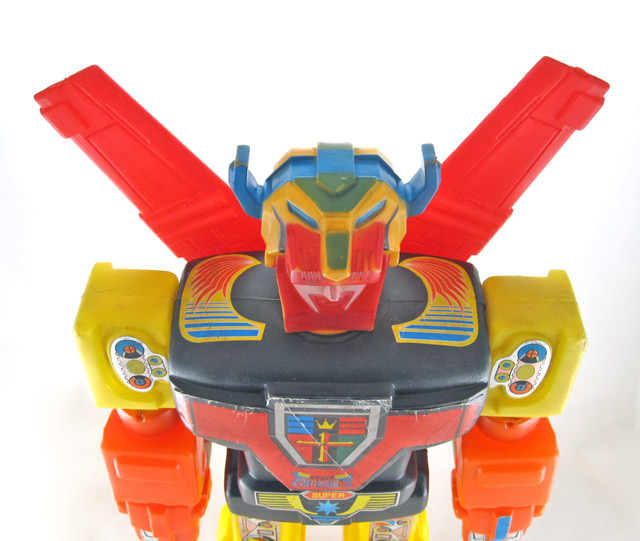 Like most bootlegs, it is slightly scaled down from the original and stands at approximately 22" tall. Lastly, I should point out that when I first heard of this thing, I was told that it's name was "Super K". It seems that this was wrong and the proper name is "Super Phantom X Robot" (슈퍼판탐-x).

Another cool bootleg review, with an interesting story behind it.
At times I'm surprised by how global the collecting community can be.

Jumbo Archeologist Dave. Great story. Please keep sharing the personal background of these rare finds. It is a good part of collecting.

Thanks for letting us see and handle this crazy, cool thing in person. I do like those extra stickers, and ankle joints.
I guess the ball and socket elbow joints have a little less movement than the original?

No doubt Dave, when it comes to obscure jumbos- you is the man!

I think his face is very similar to Taekwon V. Wadda ya think?

You guys like some weird stuff! :) But I can understand--it's a very interesting piece with the new colors and stickers and slight changes. I wonder what the packaging on these things looked like.

I have one Korean Jumbo in my collection, albeit a very recent one. It's an oversized Deckerd from Brave Police J-Decker, based on the smaller Sofubi version. It's actually licensed by Sunrise and Takara. I only regret that they didn't include any accessories with him--he's rather plain without a revolver or police badge /=)

For those who don't know what Jon is talking about, about a month and a half ago me, him, Mason and Sanjeev paid a visit to the real jumbo kingpin, Tom Franck, where I surprised him with this toy, which we'd both always wanted. Tom was quick to show his "support".... LOL

Also, just for fun, here is the original picture that I first saw. You can tell mine is the same specimen by the missing stickers and the crease in the chest sticker.

Best voltron I've ever seen. Of note is that these jumbo collectors were drinking mountain dew throwbacks. Or, as Men say, hogging throwbies.