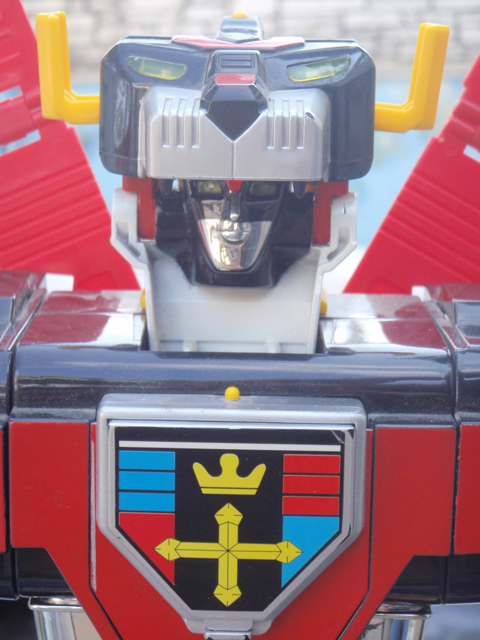 While I knew of Voltron in the 80’s, I was too young to immerse myself with it so I barely saw the show on its original run and I only had a small version of a yellow lion (the one with the friction motor) and that stand up one with batteries from LJN. In the late 90’s there was a small Voltron revival. There was a new TV show, “Voltron the Third Dimension.” Trendmasters had the license which included a reissue of the DX Chogokin version (I’m still kicking myself for passing that at $30 new.) One of the new products that caught my attention was their 18 inch combining Voltron. I knew I had to get this. Amazingly it was only $60 when new. It’d probably be $200 if released today..It is packaged already combined (imagine how huge the box would be if the lions were separated in the package.) I decided to take these pics outside since it’s such a large toy. Each lion is large on its own and quite sturdy plastic is used. Having the lion’s limbs chromed just like the original DX toy was nice touch. I will look at each lion first. All the lions have light up eyes (which you can’t see here anyway in the daylight).

The black lion is, of course, the largest. 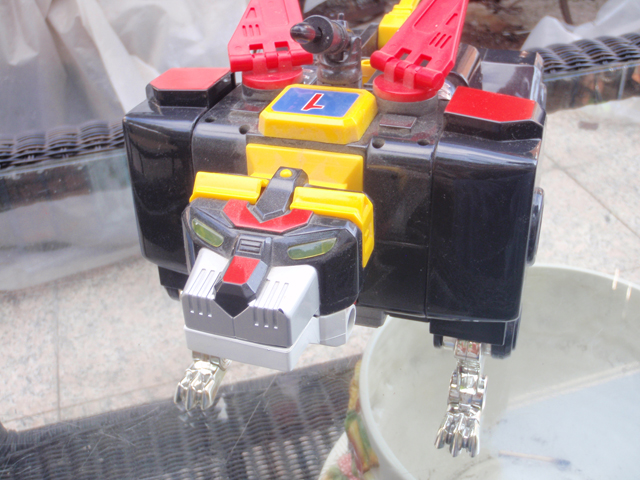 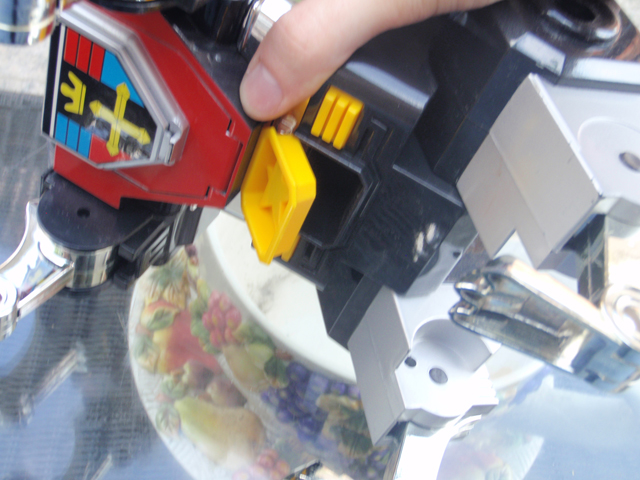 There’s a single missile launcher on its back. The other gimmick is that it came with these spike balls that stored in the star on Voltron’s belt. I didn’t feel like looking around for those balls, and frankly it’s the weakest gimmick on the toy. The top part of the mouth is silver when it should be painted white like the bottom. 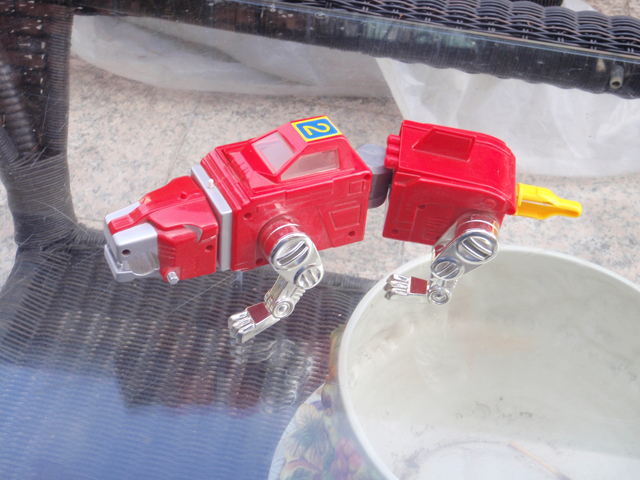 The red lion is able to bend at the waist just like the old DX toy. 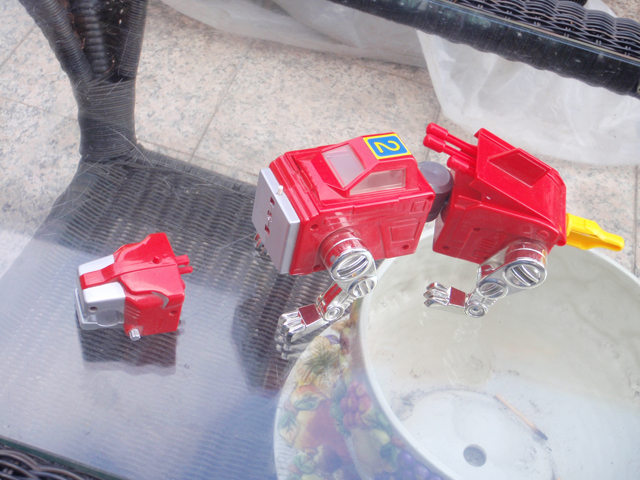 Besides the head firing, there are three missiles that fire at the same time when a button on the side is pressed. 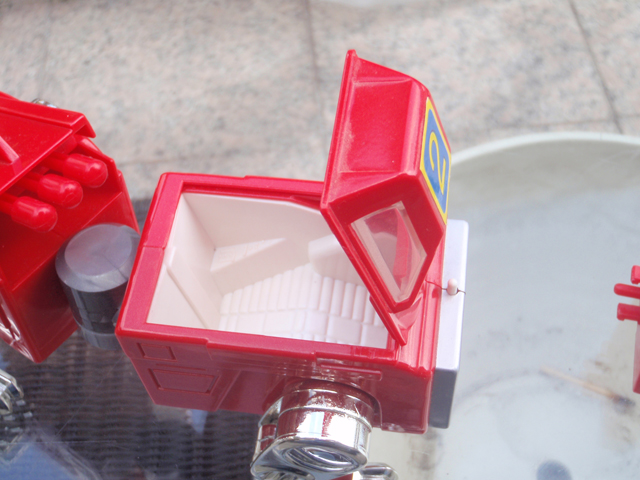 Oh, what’s that? There’s a cockpit, too. since Trendmasters also made figures. I never cared to pick those up. 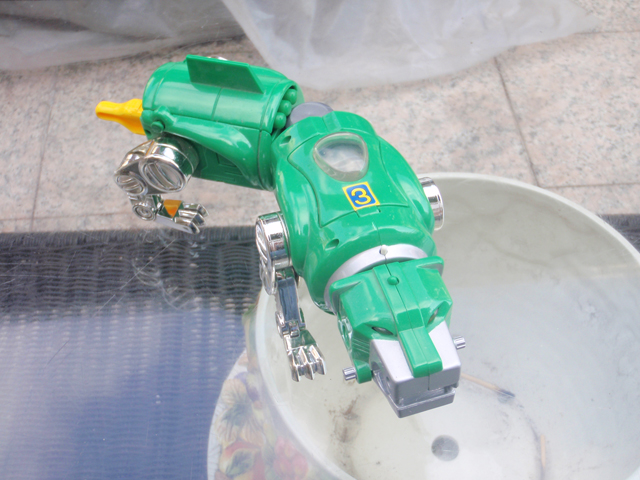 The green lion is actually my personal favorite. I like how it’s just two cylinders that form the lion’s body and its contrast to the rectangular red lion. 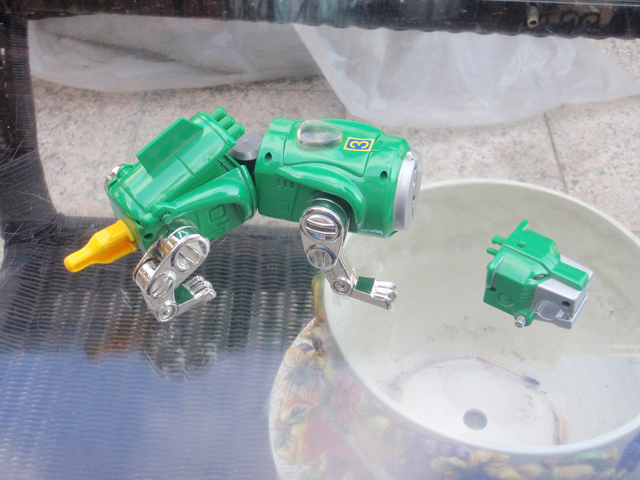 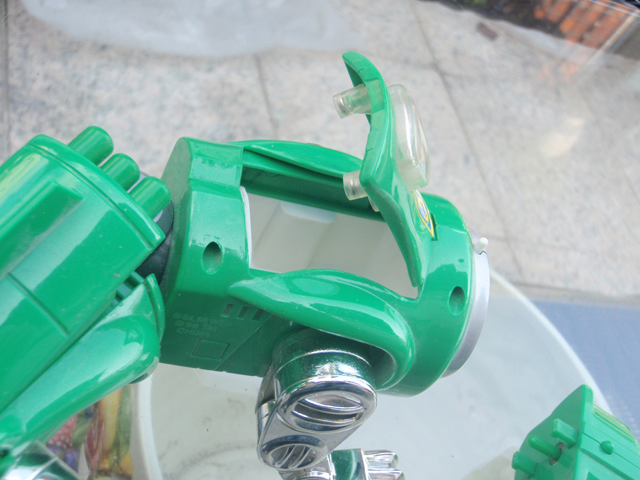 Just like the red lion, it too can fire its head,, shootsthree missiles on its back, and has an opening cockpit. A minor complaint I have is that the green is the wrong color. This is what’s known as “kelly green” when it should be more of a “peacock green”. 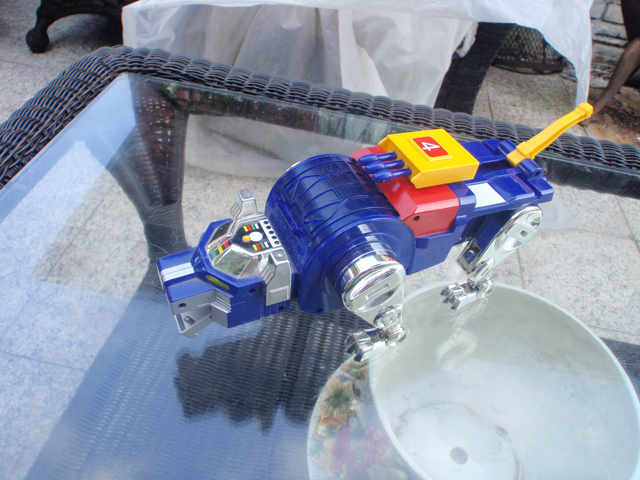 The blue lion has a firing pack on it’s back that fires three missiles at once. 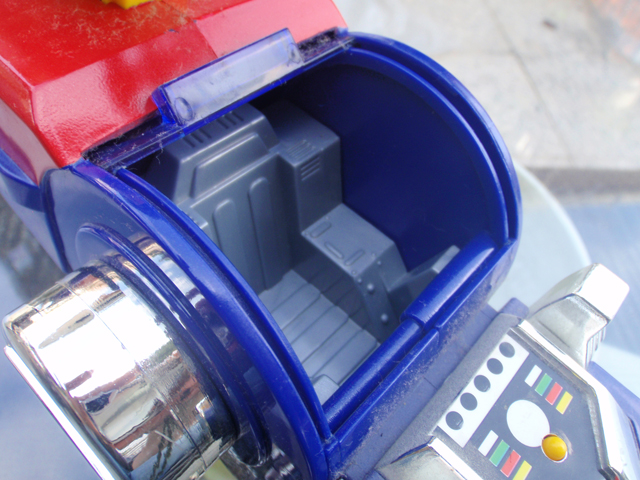 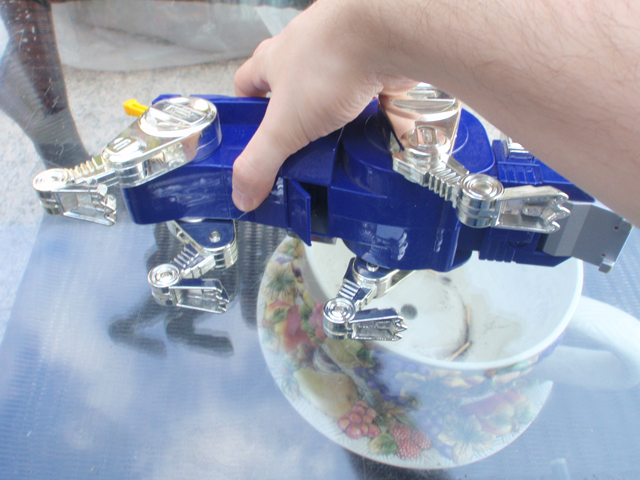 I like the way the cockpit rotates inside itself to open. Like the black lion, this too has the ability to drop those spiked balls I mentioned before. The blue should be a lighter shade, as the toy is a bit too dark. 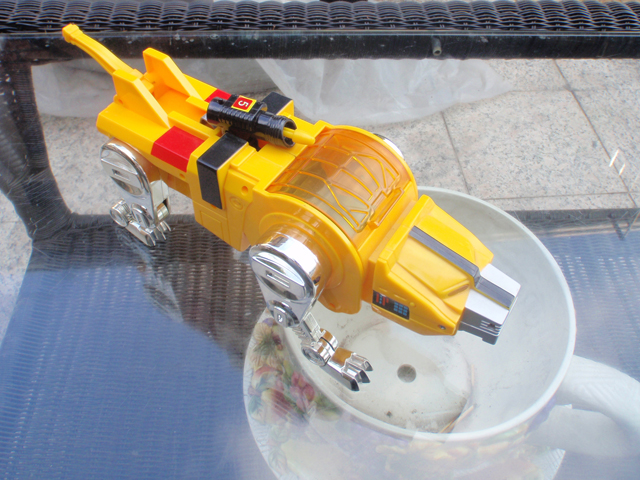 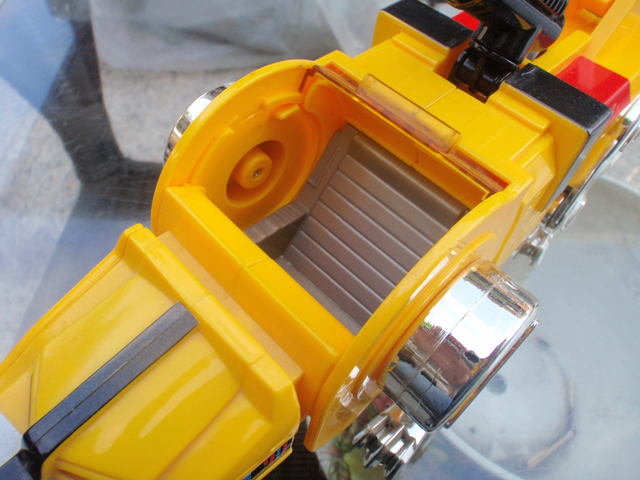 Finally, here’s the yellow lion. It has the same gimmicks as the blue but fires a single missile instead of three. 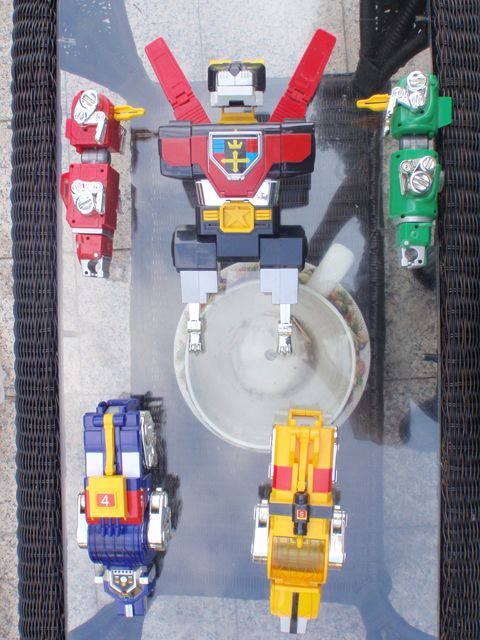 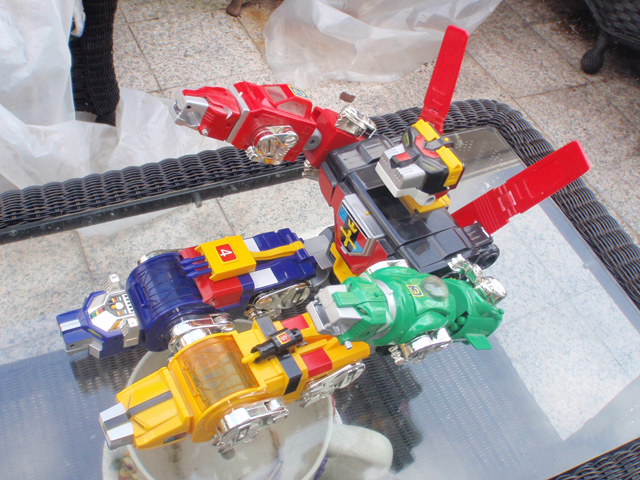 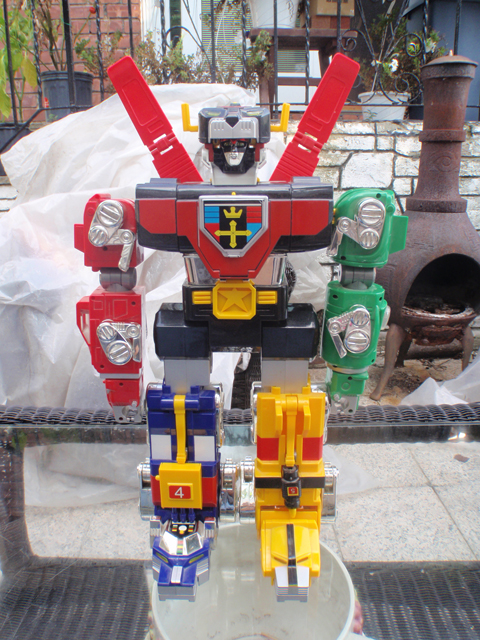 Here it is! Voltron stands about 18 inches tall. This is the largest robot toy I own (the second biggest would be a Power Rangers Pyramidas I inherited from my cousin.) While it stands tall, the proportions are a bit off. For one thing, the thighs are shorter than they should be. The legs of the blue and yellow shouldn’t be touching each other like that (I gather that was done so they could work in the cockpit.) On the face, while nicely chromed, the black should be blue. Oddly enough, the elbows were configured incorrectly. It’s an easy DIY job that requires unscrewing the bodies of the red and green lions to place them so they bend upward when in Voltron mode. 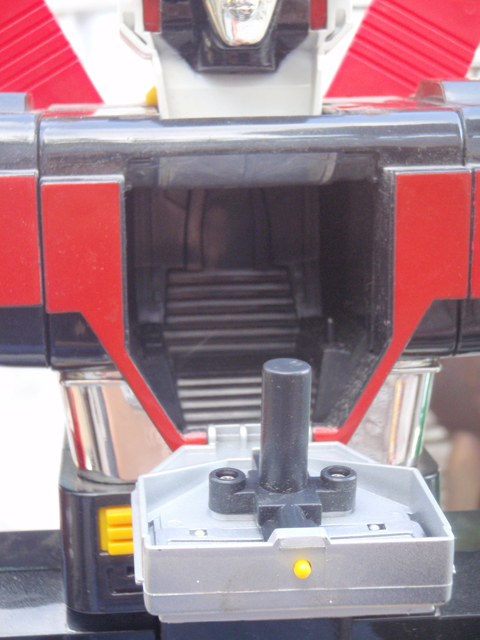 These are just minor complaints compared to the praises I have for this thing. It’s very well made and stays together (although if you pick it up, hold on to the legs as they might detach, but maybe that’s due to the age of the toy). The chest has a cockpit, but unlike the other lions, this one is vertical so it mainly works best for the combine mode. It’s large enough to hold a G.I. Joe or Microman-sized figure. 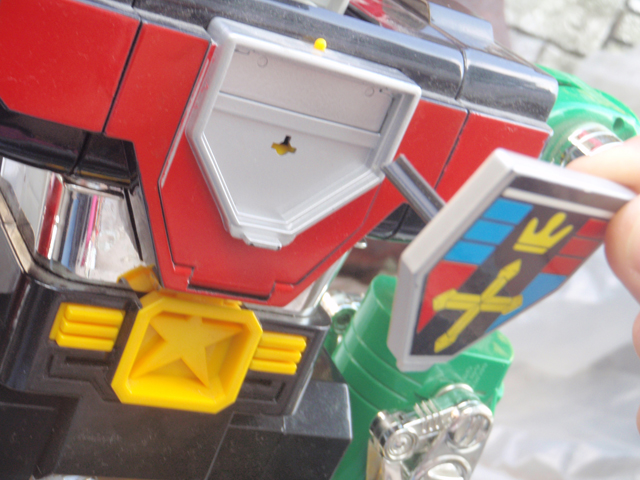 Another gimmick is included just for this mode. The crest on the chest fires. 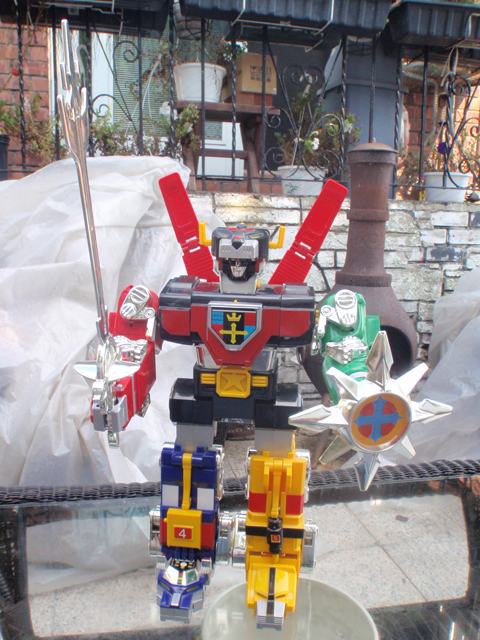 Here’s what we’re all wanting to see, the Blazing sword! It’s HUGE and can almost double as a roleplay toy on its own. The Blazing shield is nice, too. 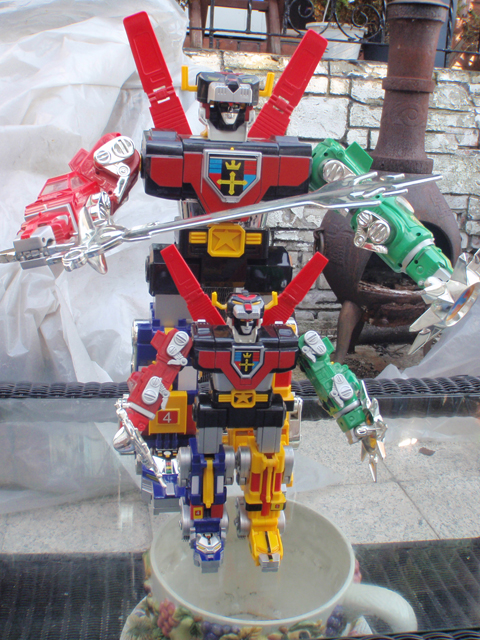 While I don’t own the original DX toy, I do have the combining one Trendmasters did that had tiny little pilots included. 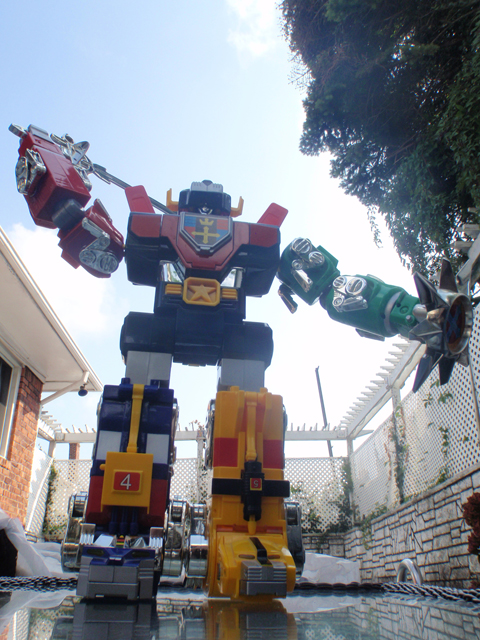 Overall this is a fantastic toy that’s both huge and highly playable. I recommend tracking one down if you can get it for a reasonable price, It certainly looks better than Mattel’s large combining Voltron.

"I didn’t feel like looking around for those balls, and frankly it’s the weakest gimmick on the toy."

Well, I'm disappointed! I expected you to review EVERY gimmick on the toy.

But I guess... you didn't have the balls.

No, it does not. That Trendmaster's monstrosity should have never being conceived.

The concept was cool but the final product is hideous! The only good things that particular Trendmaster's Voltron has over the recent Mattel giant combiner Voltron are the LED eyes and lack of spring loaded legs. Gosh, it is sooooo UGLY!

First of all, good review.

However I have to agree with the others. This toy has some terrible proportions. Yes, it does a lot, and Yes, there is a lot of play value, but it just looks wrong. Price is good, and I like the firing fists, the chrome limbs, and the way the cockpits are handled. If only you can take the GOOD of this product and add it to the MattyCollector Voltron. Imagine if that had the details from this, but the proper proportions. That would be insane.

Maybe I'm weird, I like the proportions, it screams "TOY!!!" to me.

I agree that this is a toy with good ideas, but it's ugly. In separated form the black lion is just plain wrong, and then in combined form that little face looks like a kid wearing his dad's clothes. Combined proportions sort of look like Srungle, but in color. Saying this looks better than the Mattel version is some BIG wishful thinking.

Maybe it was a bit much to say that the Mattel one doesn't look as good although the quality control on this toy is lightyears ahead.

While there are a few proportion issues, I'm not seeing the ugliness on this toy but that's me.