Toynami has decided to try a new approach with their Macross/Robotech license by switching to a smaller 1/100th scale transformable fighter. There has been lots of controversy in fan circles over these toys since they have come out. Are they awesome, or are they junk? Read on to find out. 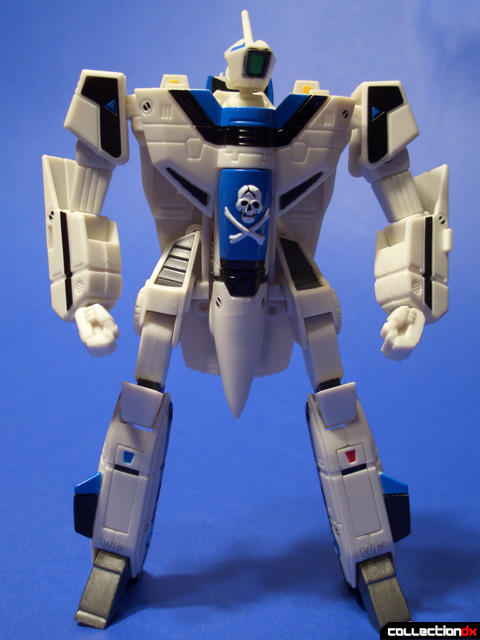 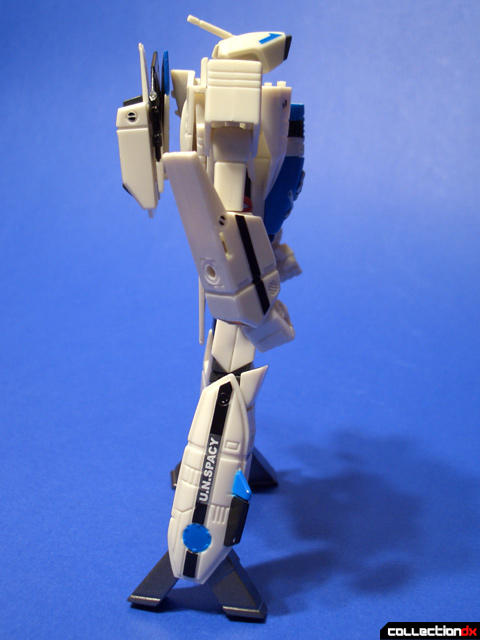 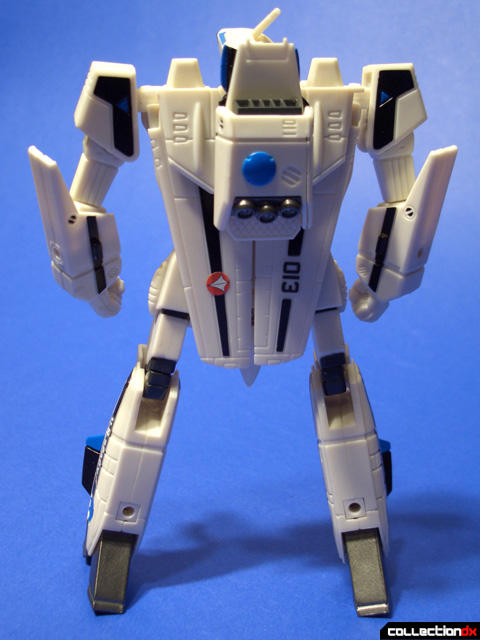 The figure stands at 5.5 inches tall with thirty points of articulation and fully transforms between all three modes seen in the movie and series; Fighter, Gerwalk and Battroid. If your more of a Robotech nerd that would be; Fighter, Guardian and Battleloid. That is impressive considering how small this guy really is. 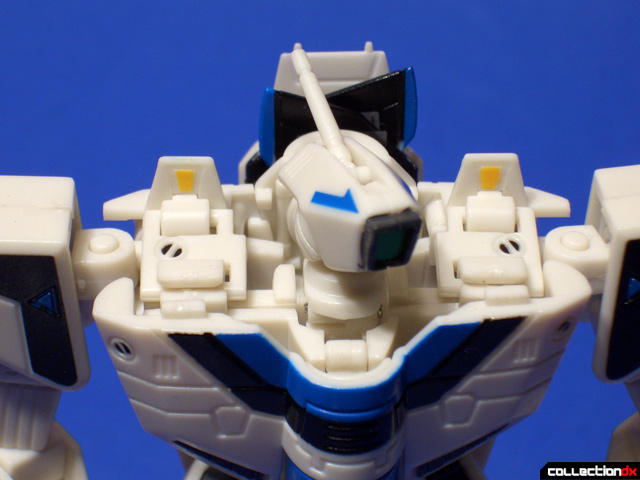 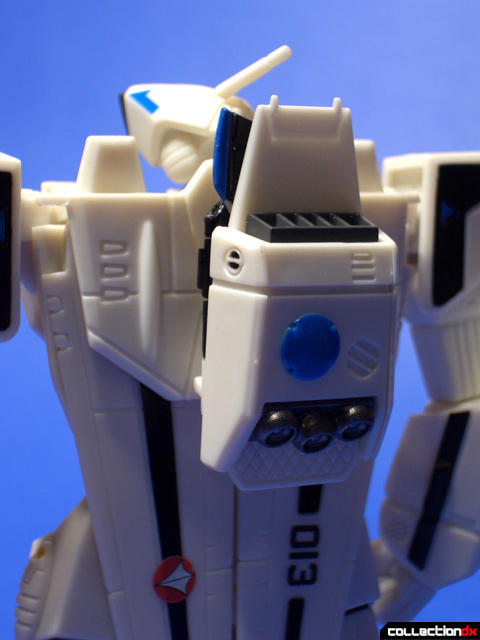 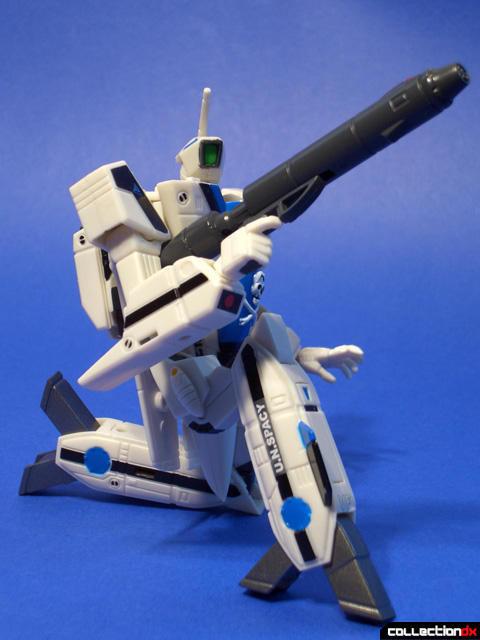 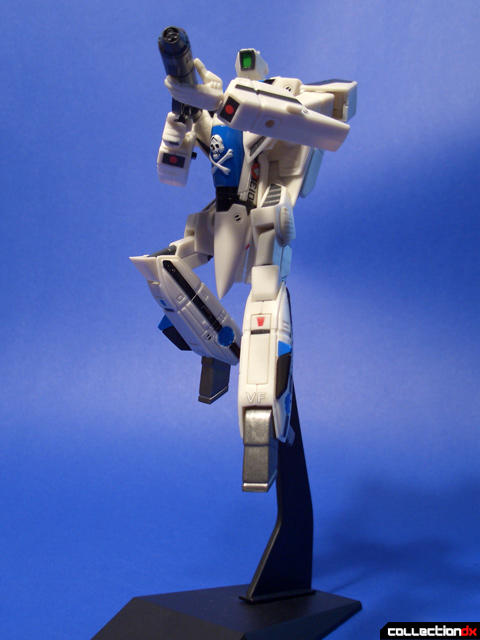 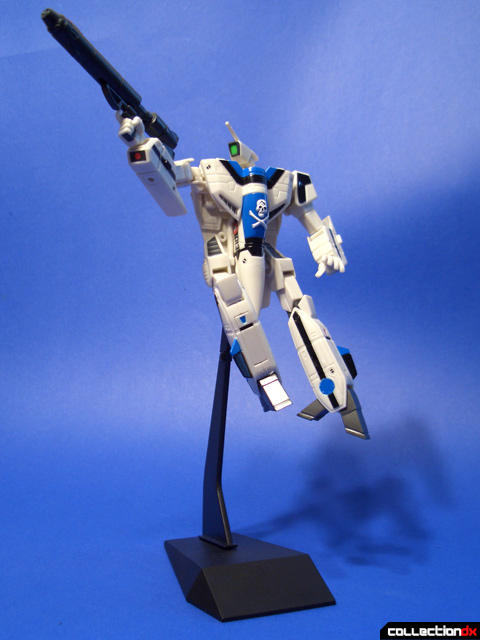 This particular paint scheme is of Max Jenuis’s VF-1A from the film version of Macross: Do You Remember Love. Most details are painted on with a few stickers to apply. 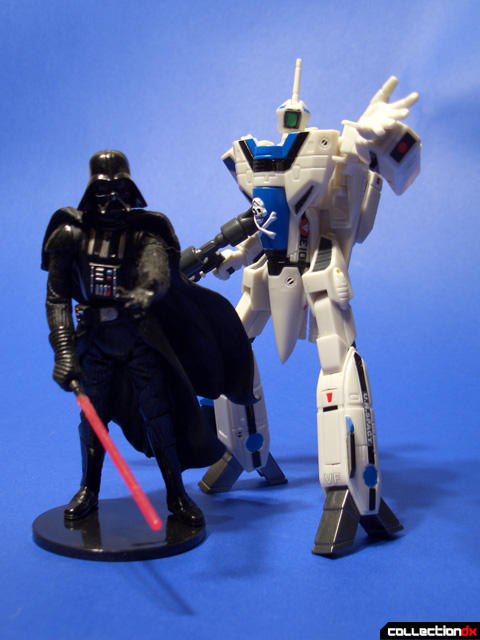 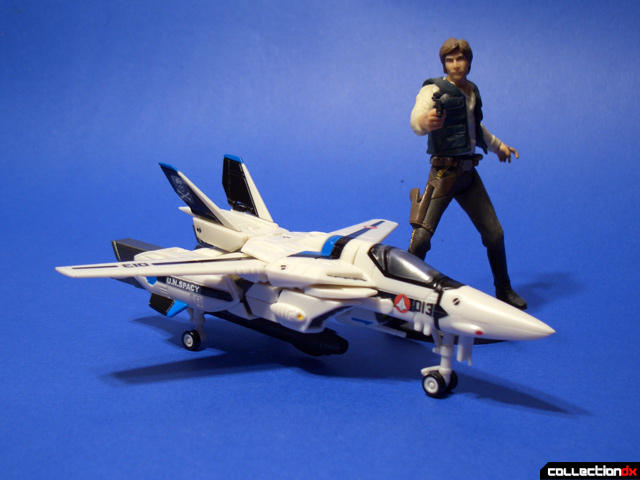 The blast shield over the cockpit comes with a preprinted skull logo that is actually slightly raised which some collectors seem to hate. Personally I think it makes the logo “pop” a little bit more when on display and posed on the shelf so it is not a point of contention for me. 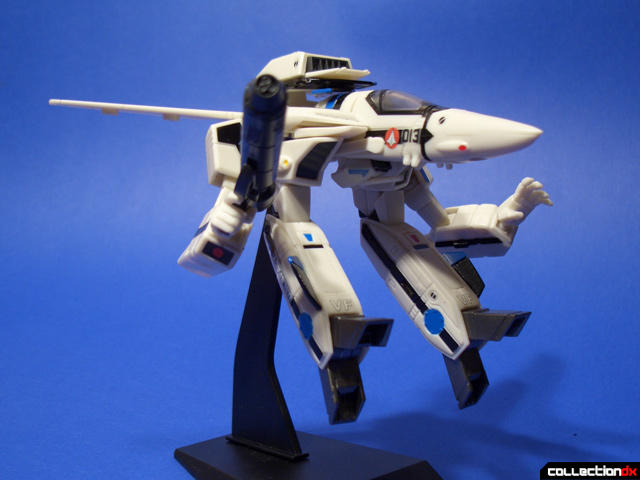 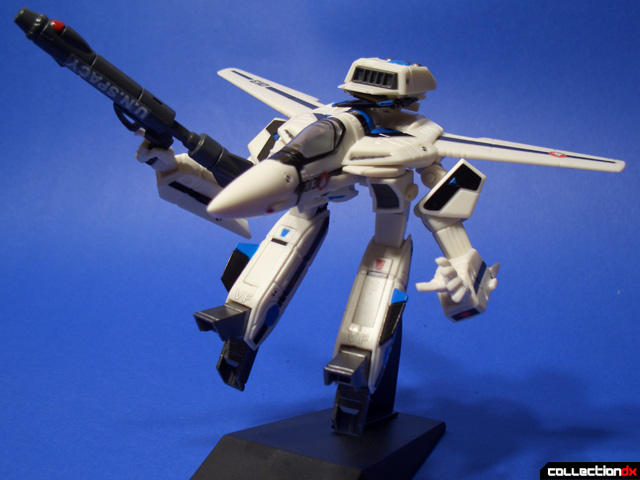 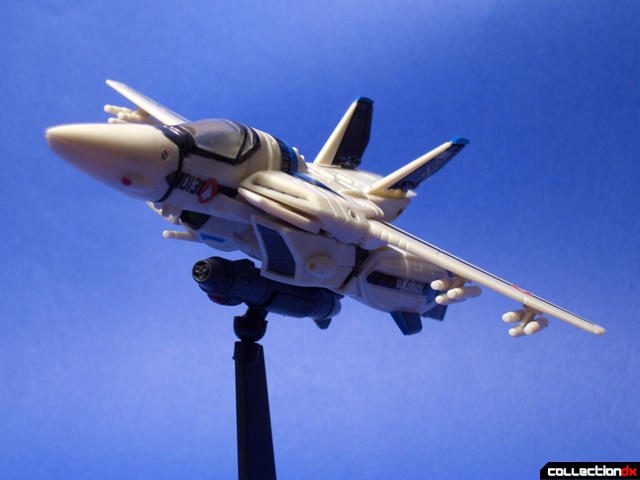 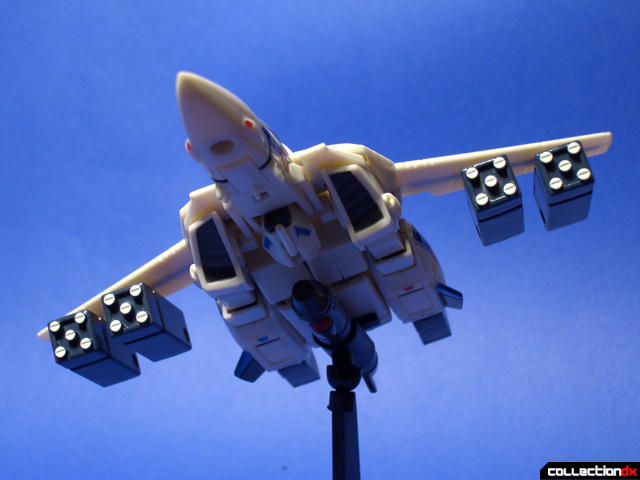 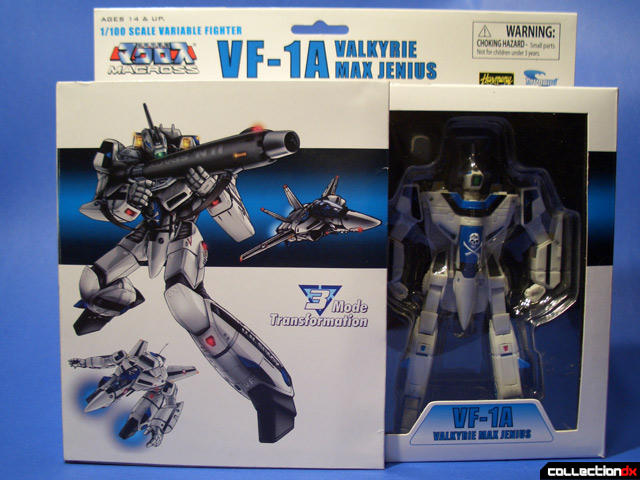 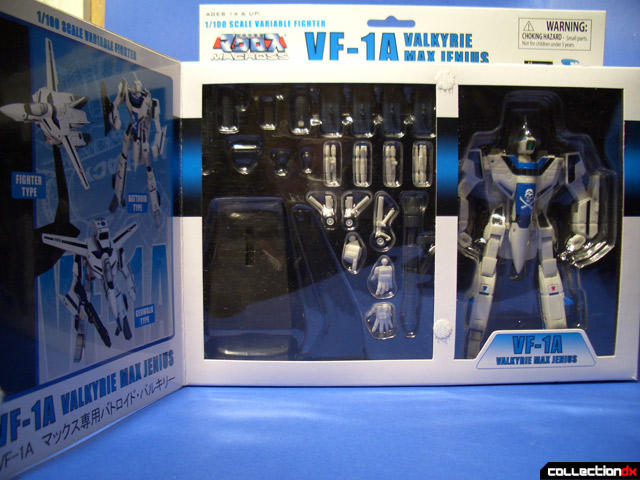 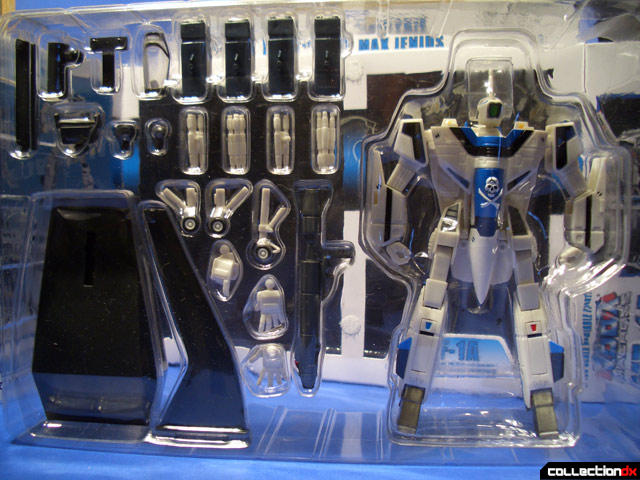 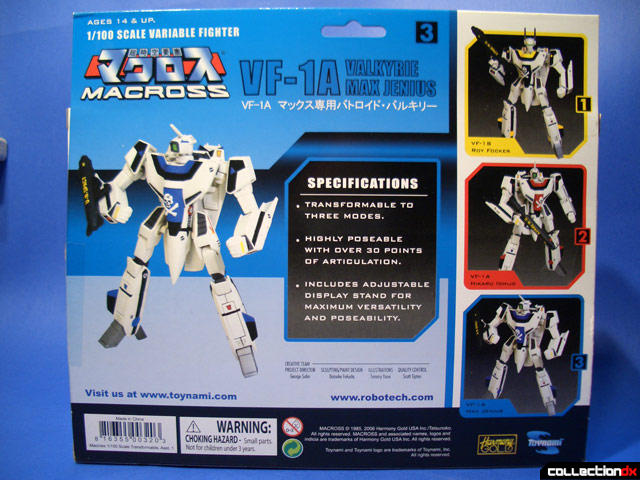 The stand comes with a ball socket that adapters plug in too. Early pressings of these figures included a ball socket made from a softer plastic that would tear after a few swaps of the adapters. Toynami was quick to correct this so newer shipments of Series One as well as all Series Two have the stronger socket included. If you have one of the defective sockets you can contact Toynami at CustomerService@toynami.com and tell them how many new ones you need. They got me my replacement sockets within a few days.

I must say that overall I am very happy with this toy and I do plan on picking up the rest of the series. I think it is fantastic that Toynami is trying this smaller scale series and I only hope this leads to more mecha from the series that we do not see a lot; such as Zentradi mecha or Destroids. The low price point is fantastic and finally I have a decent looking Valkyrie/Veritech that I can transform and pose without fear of breaking a $150 - $200 collectible.

That is not to say this toy is without flaws. The limbs get a bit loose after transformation a few times. This appears to have been corrected with the series two figures and repressing of the series one.

Are these the same as the older Banpresto valkyries that were released some years ago? I believe they were the same scale and also made from ABS, the Toynami version here looks an awful lot like them even down to the packaging.

Although they are in the same scale, they are totally different toys. The Toynami is much better quality.