Officially released at the 2008 San Diego Comic-Con, kaiju Vegetius is a loner of a monster. I mean, how many friends would you have if you were a giant bird...turtle...monster thing? 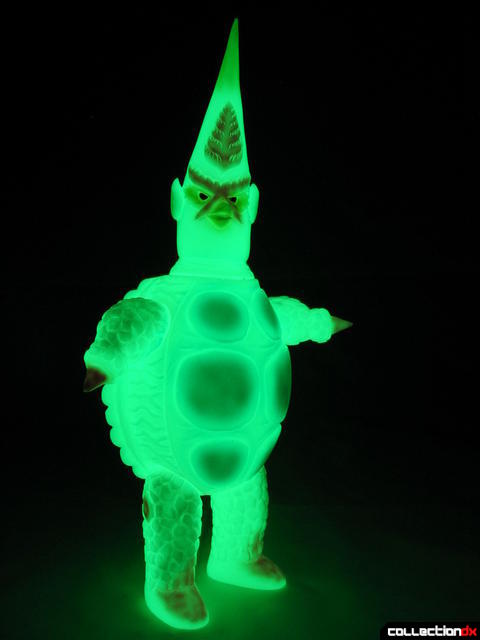 Well, *I'm* friends with this guy, damnit. Sure, he glows--and he's part of Boston's own Kaiju Big Battel pantheon--but he's a damn good kaiju toy in his own right.

Brought to us by Rand, head honcho of KBB, himself, Vegetius is Marmit's lastest sculpt of these fantastic Japan-inspired, US-grown beasties. And this is one helluva kaiju toy. 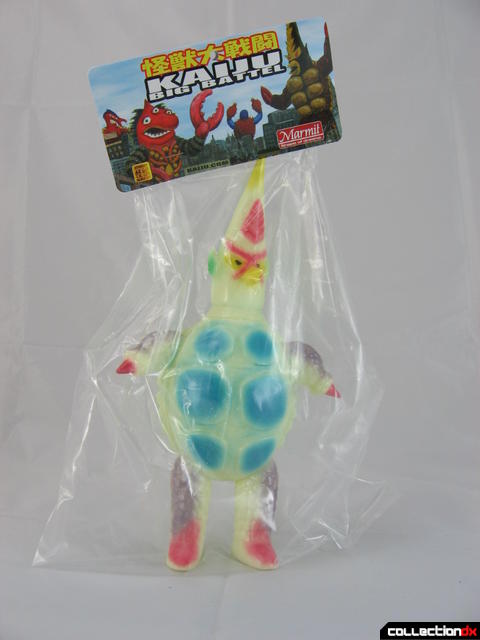 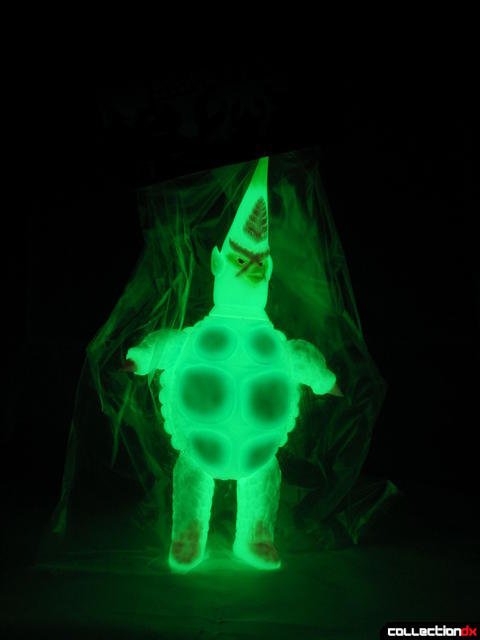 Okay, he's not "2 x the tallest tree in the forest", but he clocks in at a solid 12" (30cm) to the very tip of his...horn...thing. The vinyl is dense and very thick, making for a massive figure. Very impressive toy! 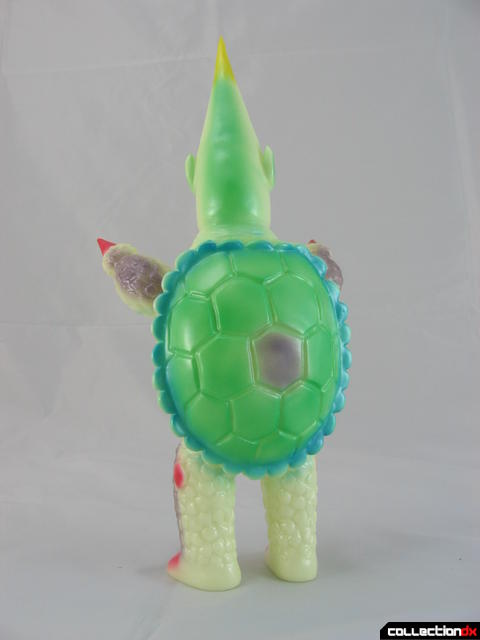 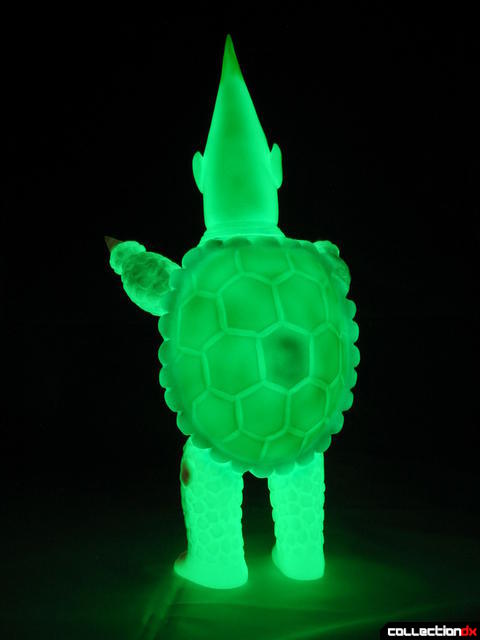 Honestly, the sculpt was a little off-putting when I first saw pics online of the unpainted prototype. The huge bulbous body and the teeny splayed arms weren't doing it for me. The paint job sold me on this piece, though...immediately.

Sure, I'm a bit of a sucker for glowies, but I'm actually pretty picky about the ones I buy. With the ridiculous number of "colorways" any vinyl sculpt can be available in, one of the biggest deciding factors for me is paint. 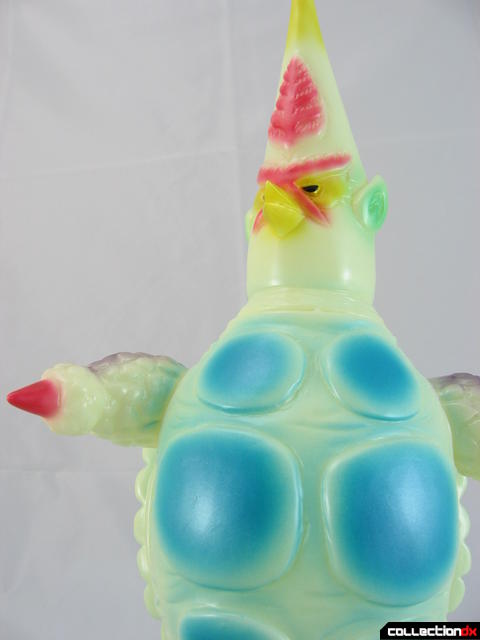 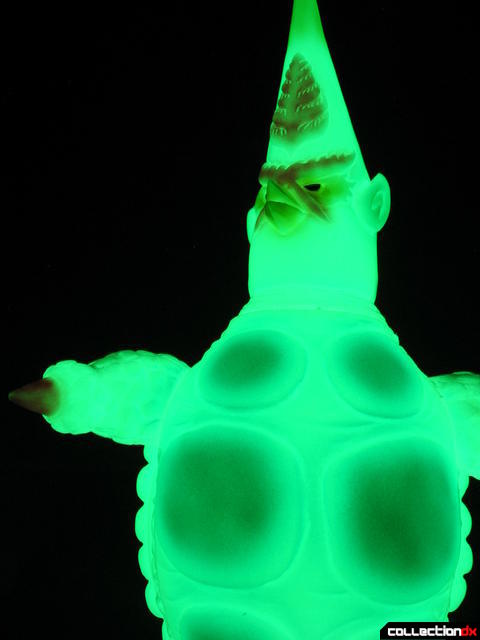 That multi-colored spray on this piece drove me nuts! Light blue on the chest and around the edge of his shell. Green on his ears and the main part of his shell. Touches of purple on his arms, legs, and center of his back. Magenta on his feet, hands(?), and face. And finally, yellow on his beak, around his eyes, and on the tip of his horn-thing.

And he glows SUPER-bright, so if you're into glowies as much as I am, you won't be disappointed. In fact...that may actually be my one gripe about this toy. Vegetius glows too well! Marmit's own glow Sky Deviler was actually shot in a much softer glow vinyl with glitter embedded in it. As such, he doesn't glow nearly as bright as Vegetius. Maybe Frank Kozik's custom "Coral Sea" Sky Deviler will be brighter when it comes out... 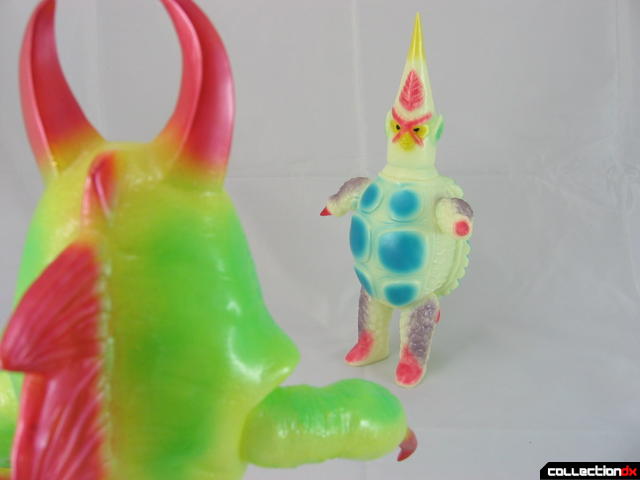 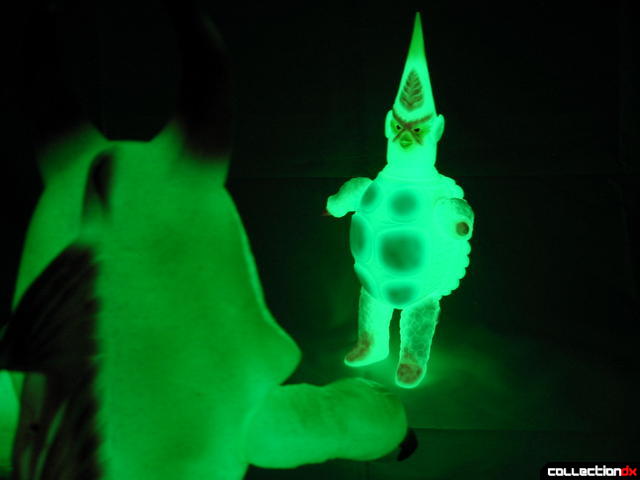 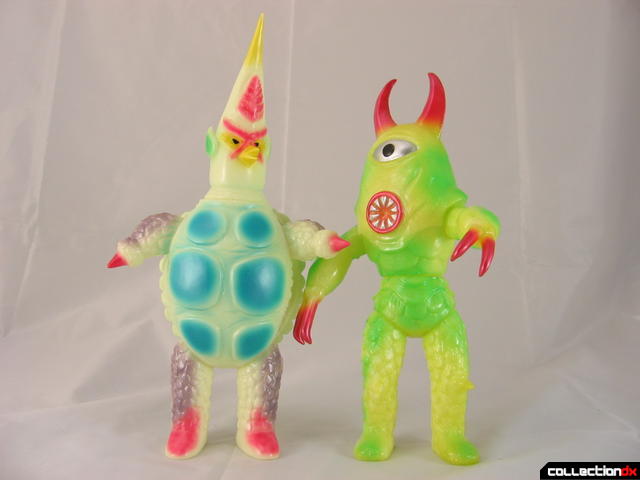 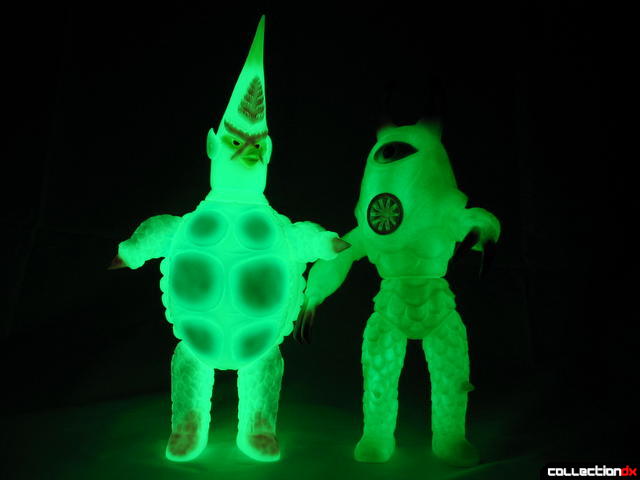 Clear and Chrome is always great, but I forget how cool Glow in the dark is. A Great toy!

Nice review. I don't own any vinyls, because they're not really my sort of thing, but this one looks so damn cool I might actually make a feeble attempt to catch one on the aftermarket!

However, due to my lack of experience, I am wondering about something. Is this figure hollow and squishy, or a solid chunk of material?

Well, I don't have mine in hand yet, but I'd guess that it's pretty firm. Vinyls are always hollow, but some are squishier than others.

While this glow figure is nice, I think I'm glad I decided to go for the regular non-glow version. It just looks a bit more natural to me than this does..

I got the non-glow as well... The glow looked silly to me on this one. I mean, the whole character is silly, but it looked like a 3 year old that got into mom's makeup box.

Out of curiosity, what does the non-glow look like? It's possible I may like that one better as well.

You can see the regular color Vegetius here.

Okay, thanks. I can see the appeal in that one as well but I think I still like the glow better. Not like I'm ever actually going to own one, anyways...

So for now, this will have to do for my recent glowie lust (took me by complete surprise...I haven't always been like this!)

awesome pictures! great review! I think i'll buy one of these and throw away my desk lamp!

Well, the major factor with the price is the # of pieces run. With dog toys, you are running hundreds of thousands of pieces, no articulation, no paint apps. So its no wonder that they are so cheap. Also, those are made in china and thailand. Japanese vinyl is low run (often under 100 peices) so you can't get the volume discounts.

AHA! So now we see what Sanjeev and his arch nemesis SkyDeviler look like in a battle pic together. Yikes .