The human Battle Machine Uplink was created and built by Exo-Force member Ryo as a battlefield repair unit. With Ryo in control of his custom Battle Machine, it can dash out to any of its fellow Battle Machines and fix it in a relatively short time with a wide variety of tools and spare parts. In addition to this, it is also equipped with a pair of small pulse laser cannons and two medium-range missiles so it can provide cover for its damaged comrades, or offer limited fire support at the vital First Gate on the human side of the Tenchi Bridge. Because it is composed of mostly storage cells for replacement parts, the Uplink sacrifices thicker armor, strength, advanced weapons, and overall size for speed and agility to get out and back quickly. Its power generator is smaller because it dose not have the great power requirements its brethren do, which also helps to decrease its size and weight. Like all of Exo-Force’s other Battle Machines, the Uplink uses a control system that mimics the movements of its pilot, so Ryo needs to be as agile as his custom-made Battle Machine is. 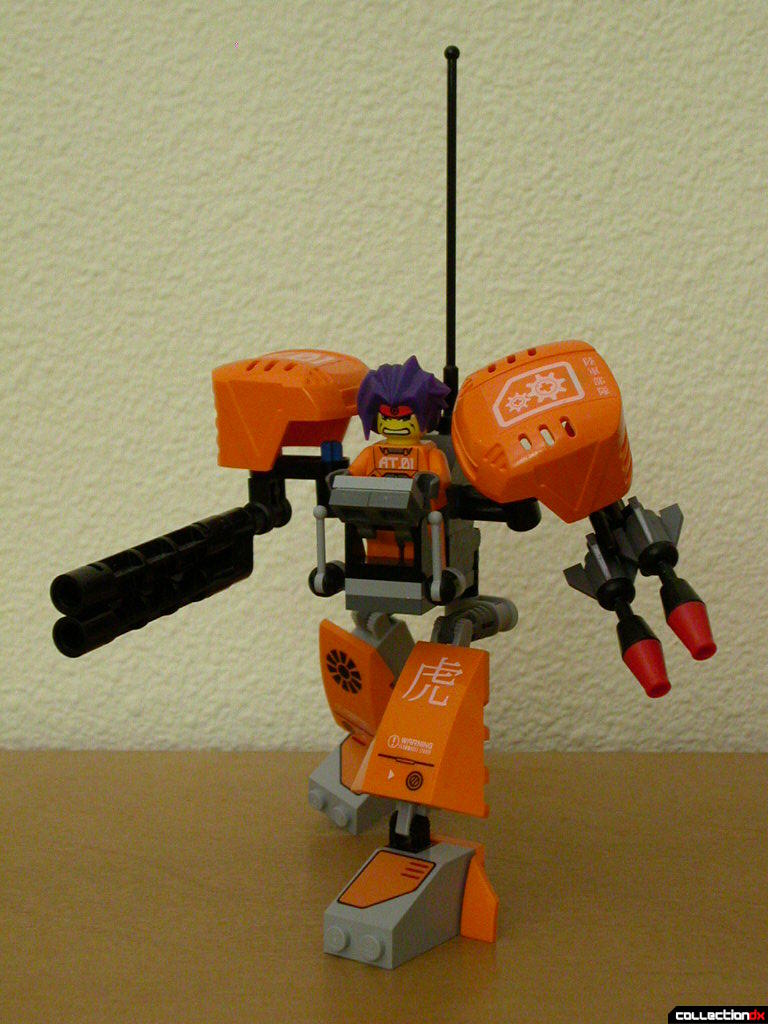 At only 69 pieces, Uplink (back) is surprisingly flexible for its small size and part count; though articulation still has to go to the advanced 5-year veteran LEGO “Bionicle” and two-year “Knights Kingdom” lines. It has ten points of articulation at the shoulders, elbows, ‘hips’, ‘knees’, and ankles. The legs are backwards-articulated, like a bird’s, though the way they’re positioned limits poseability, particularly when moving them forward. But the use of a single-axis ankle joint is a welcome, if limited, addition. The arms are quite movable at the shoulders, and the missile & cannon arms can point in just about any direction. One thing about the missile arm- the way it is built, or the pieces they used often means the missile mount will just slip out of the hole it’s inserted into; which it’s not supposed to do. Also, over time, both shoulder joints may wear out due to the heavy forward weight they must support. I had to laugh when I realized at what Lego had done with the bulky orange shoulder armor pieces; they were originally helmets for the short-lived Lego “NHL Hockey” theme (2001-02). 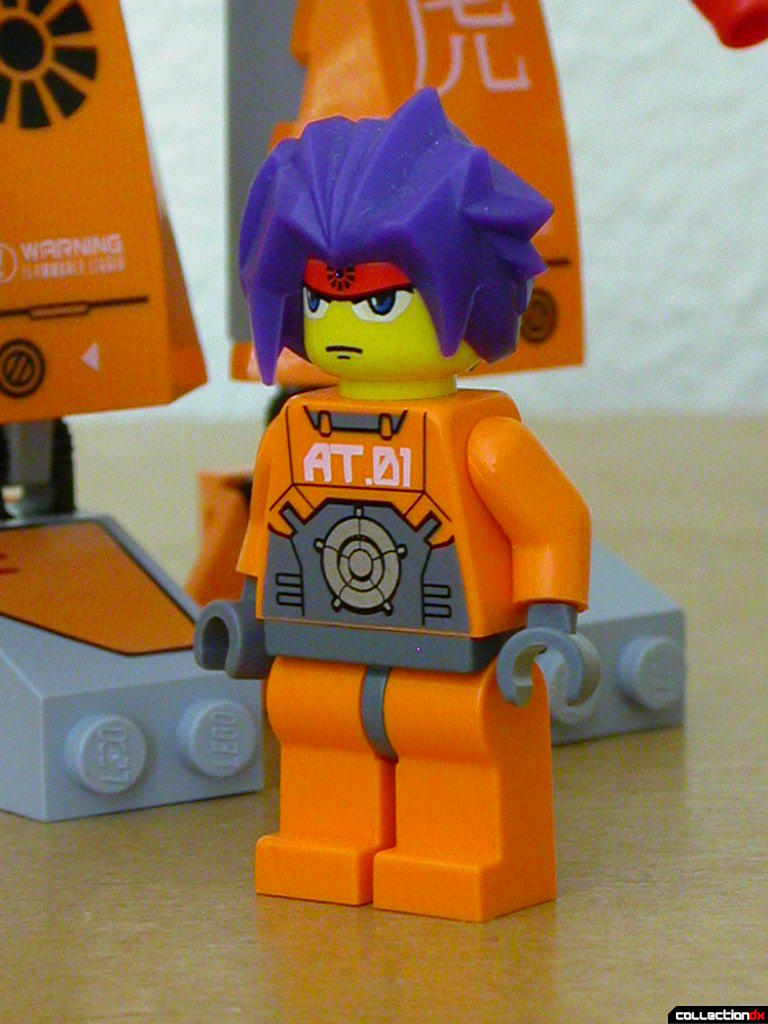 Lego Set #7708 also comes with an exclusive Ryo minifig, who not only has two separate facial expressions (one painted on either side of his head), but a new purple spiky hairdo piece introduced in the “Exo-Force” line, which adds to the Japanese anime style of the series. When the head and hair are flipped around, Ryo either displays a determined face, or a battle-cry expression, both with a red band above his eyes. (This double-face design is similar to some of the LEGO “Spider-man” minifigs from 2001 and 2003.)

Normally, when a Lego set needs specific details on a part, such as a control panel or flag, the image is printed or painted directly onto specific parts. However, the “Exo-Force” line breaks that mold by using stick-on decals; something that was rarely ever used in the past. There is a small sticker sheet which provides allegiance markings, warning symbols & notices, and names- some of them written in Japanese text! Translations of the Japanese text are given on the sticker sheet, but do not go on the parts. This serves to allow for a wider range of piece marking without Lego having to create a completely different piece each time, and merges the “Exo-Force” and Japanese toy influence closer together. It does, however, have a small downside- because of the design of the decals, some of them cover places where other Lego pieces can go, which limits how a decal-applied piece can be used or taken apart. For Set#7708, this means the two orange shoulder pieces have holes that are covered.

In addition to building the standard Battle Machine, the official Lego “Exo-Force” website (http://exoforce.lego.com/default.aspx) shows how the same pieces can be rearranged into an alternate hovercraft-style vehicle; found in the Online Building section of the site, and pictured on the back of the set’s box. I’ll admit that when I built it, I wasn’t all that impressed with the alternate model since it was so unstable, and tended to fall apart easily. 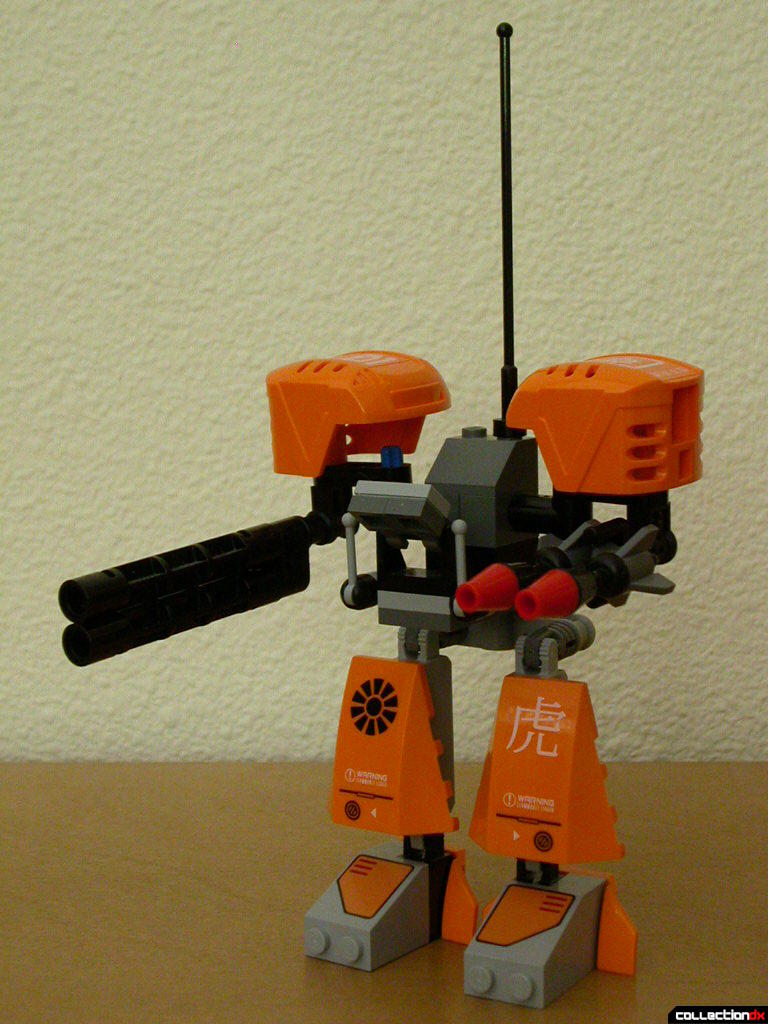 Overall, the Uplink is a cute little set, and it was the first I bought from the breakout “Exo-Force” line because I wanted to see what it was about, but not spend too much on a big set the first time. My only complaints about design would be how loose the pieces in the shoulder joints are, and how easily the missile rack falls off. I’d recommend it for anyone who likes these little compact robots from anime, or the popular “Bionicle” line. There’s something interesting in this series, and I won’t mind seeing more of it if they continue it.