LEGO Space Police III has no dedicated storyline(s) or set location other than it takes place in the distant future, but it does have a few recurring characters- notably several SP officers, and separately-operating criminal organizations Black Hole Gang and Brick Daddy’s group.

This set’s description on Shop.Lego.com:

The wings can be tilted downwards as you like. It becomes more difficult, however, to rest it flat on the ground the further the wings are angled downward. 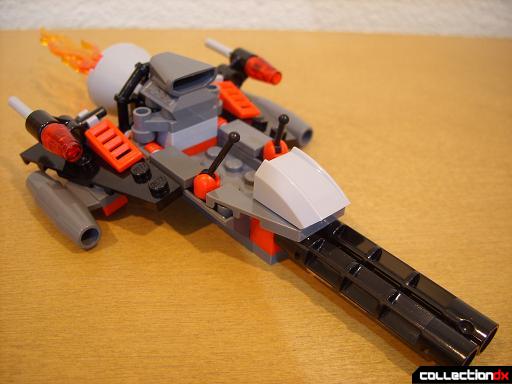 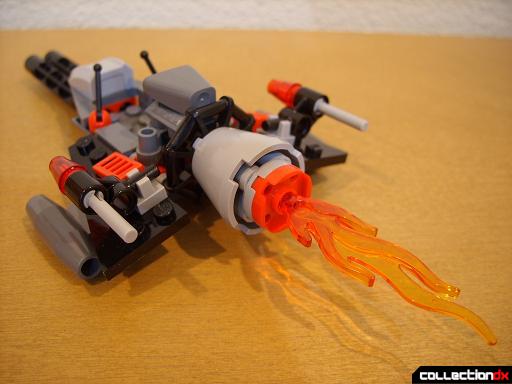 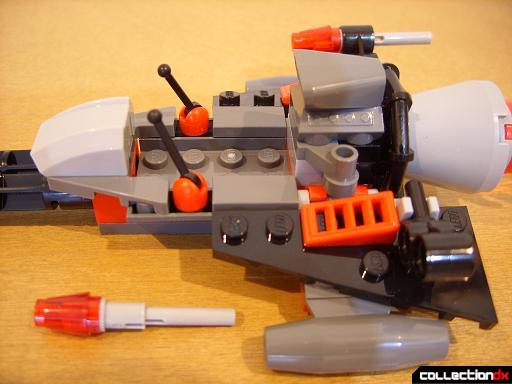 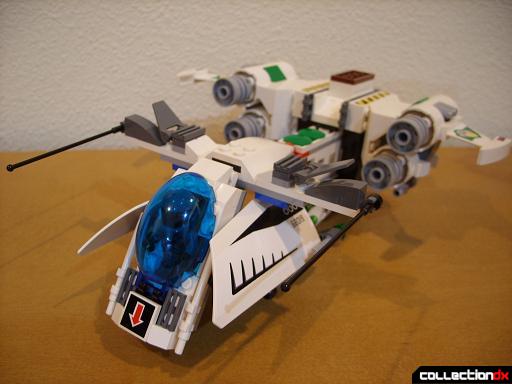 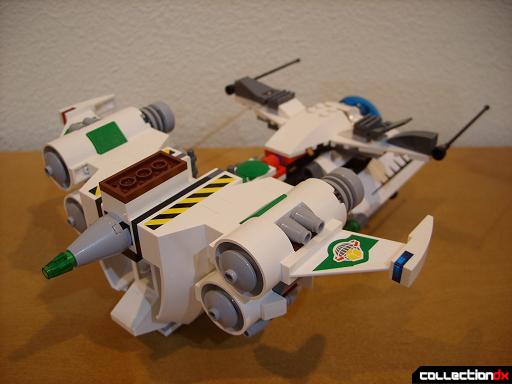 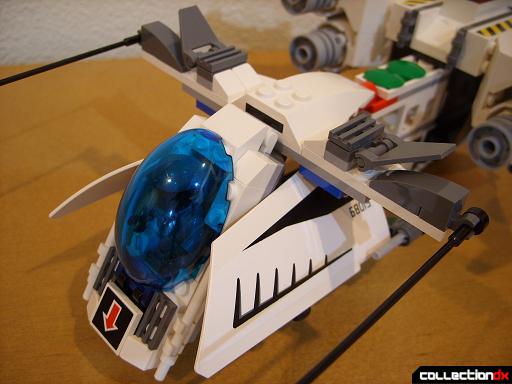 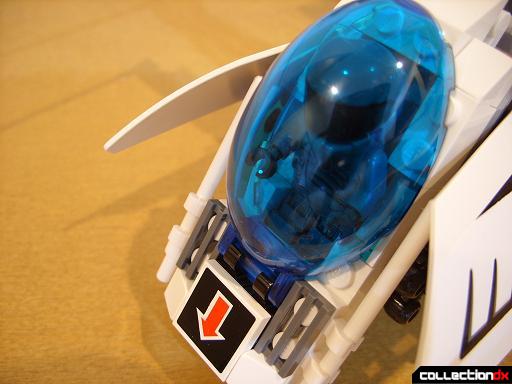 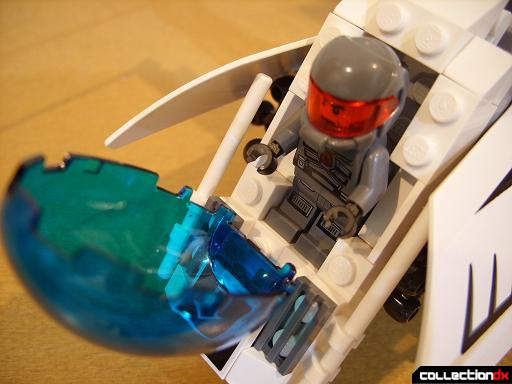 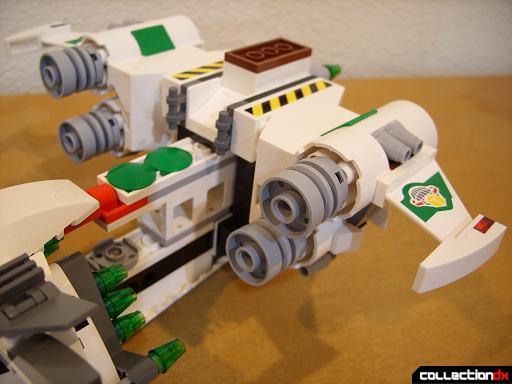 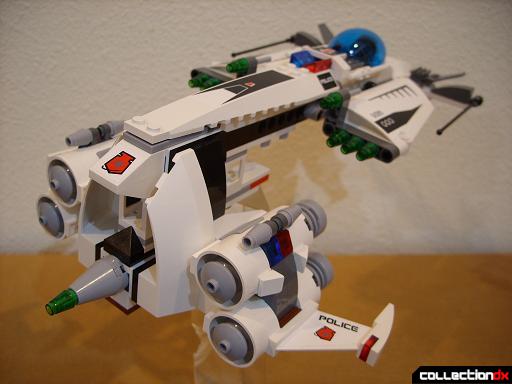 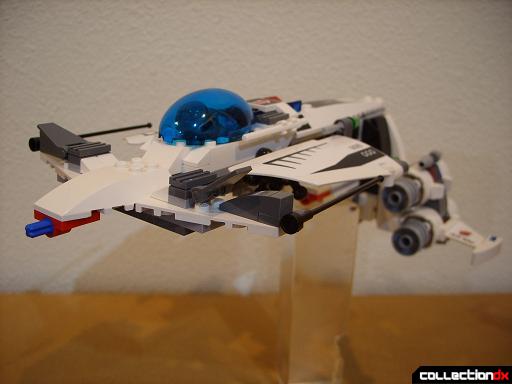 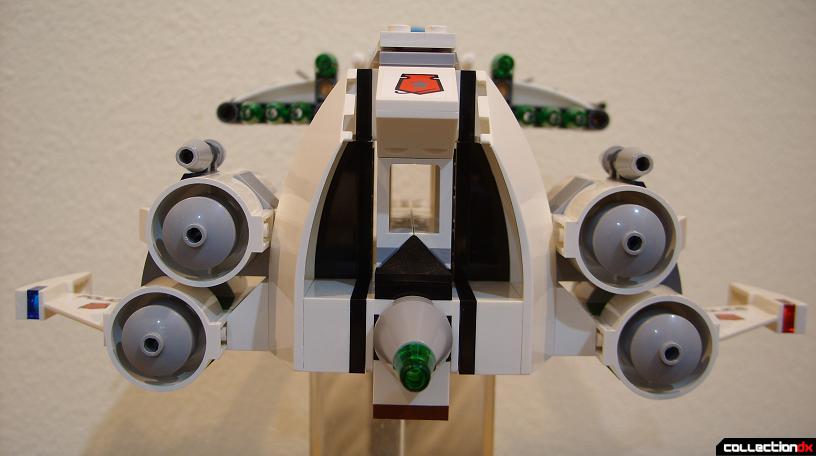 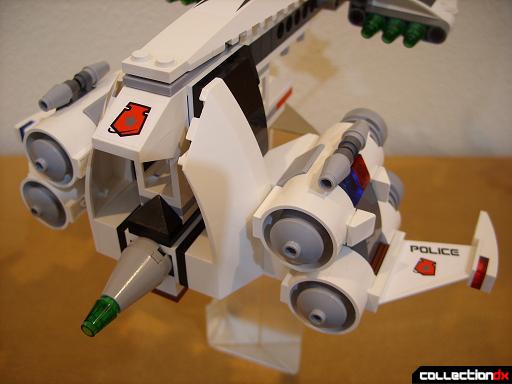 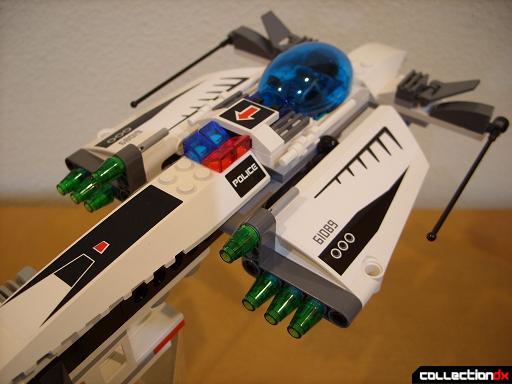 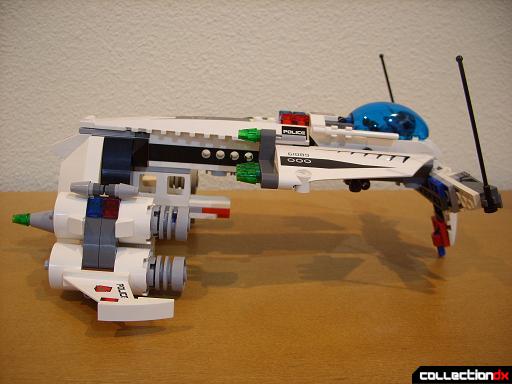 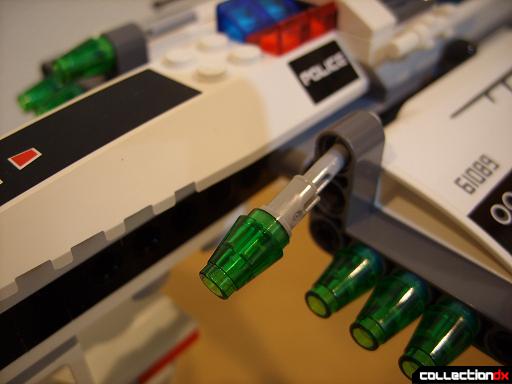 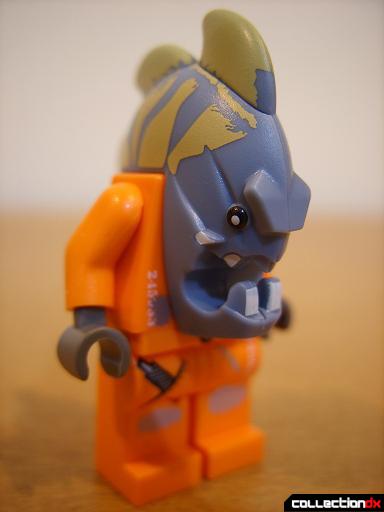 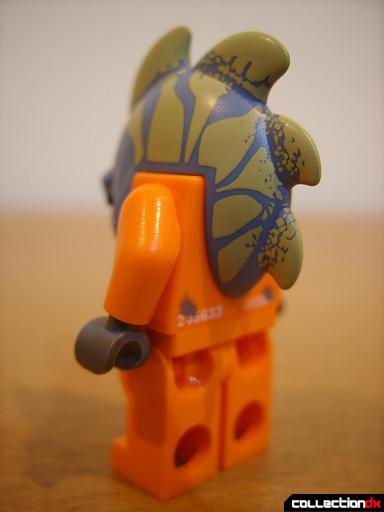 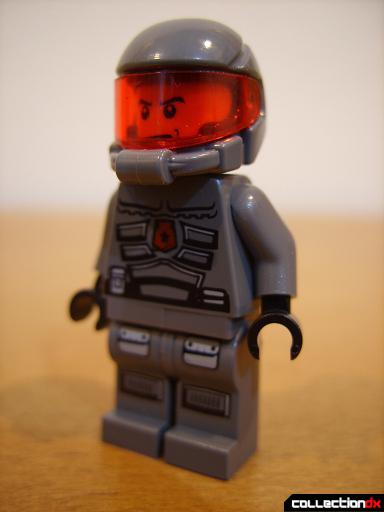 (For some strange reason, I keep hearing the old "Knight Rider" theme when I look at this set... Weird.) 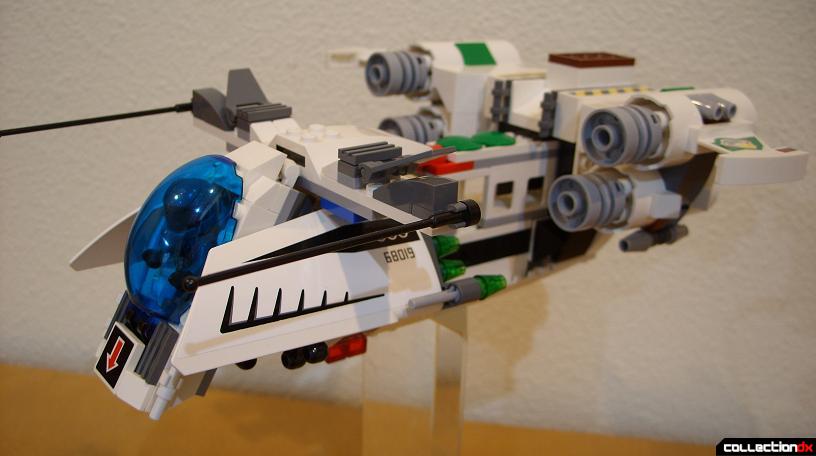 This will probably be the only Space Police III set I get. (Considering I’m writing this in 2011 and we’ve received notice that the line has ended, this is certain.) I just feel that the I and II lines in the past were more interesting when the SP were a little darker and militaristic and had that aura of the earlier golden age of LEGO Classic Space themes. Usually the SP was deployed against the Blacktron and Spyrius forces, all three of them having distinct coloring and vehicle designs. Perhaps I’m so nostalgic over the previous SP lines [because I never got any of them *cries*] that it’s blinding me to the appeal of the 2009-10 version? I’ve spoken with others in the last year at stores, and heard them also complain that it lacks ‘the thing’ that the past lines had, so I don’t think it’s just me… 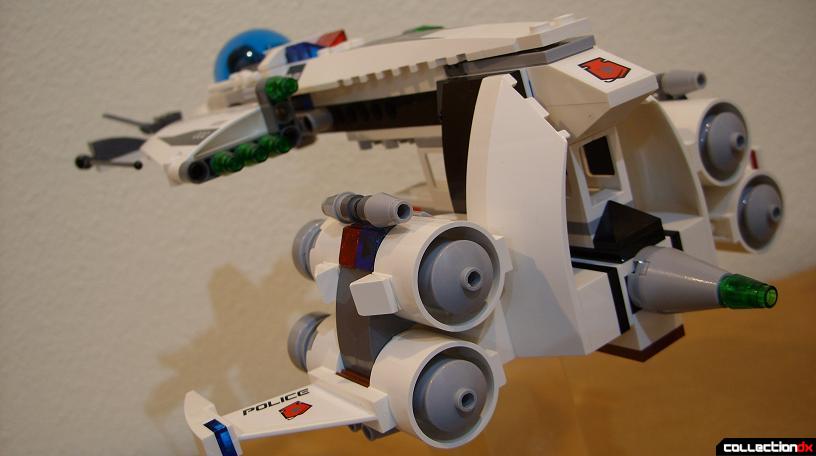 When I first saw this months ago in late-2010, the first thing that caught my eye was the massive engine block right up front. Right then I immediately thought of the podracers from “Star Wars Episode I- The Phantom Menace” which had HUGE engines up front and tiny open-air cockpits attached to them via thin control cables. Dangerous as podracing was, some of those vehicles sure looked bad-ass back in 1999. Then I turned the box around and- oh my good god!- it can transform into a disguised civilian form without parts-swapping. It had a small cockpit in front, followed by a huge engine block in back. Yeah, the engines are backwards in disguise mode, but it still looks awesome and all of the “police” markings disappear out of view underneath. Cool. As I was putting it together (took about an hour), I saw the black gears go on. My first thought was “Nooooo--!” as I realized those panels to either side of the cockpit actually auto-rotate as you’re transform it! Epic.
Wait- only two flick-fire missiles are provided? What about those six other green cones right next to them? Well… they’re fakes! Grrrrr! The back of the cockpit pod doesn’t snap into place very well in disguise mode either, so you may have to keep an eye on that. Oh, and you have nowhere to store either the handcuffs when their not in use, or Jawson himself once he’s caught. (Most other Space Police III sets have portable prison cells that are detachable.)
By the way, why was the engine block connected to the rest of the ship with flat plates that allow it to separate so easily? Why not build the connection solidly so it doesn't separate at all? 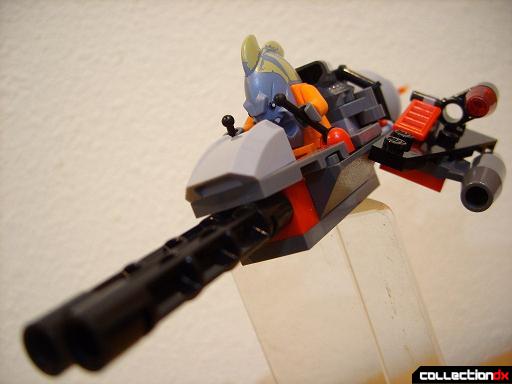 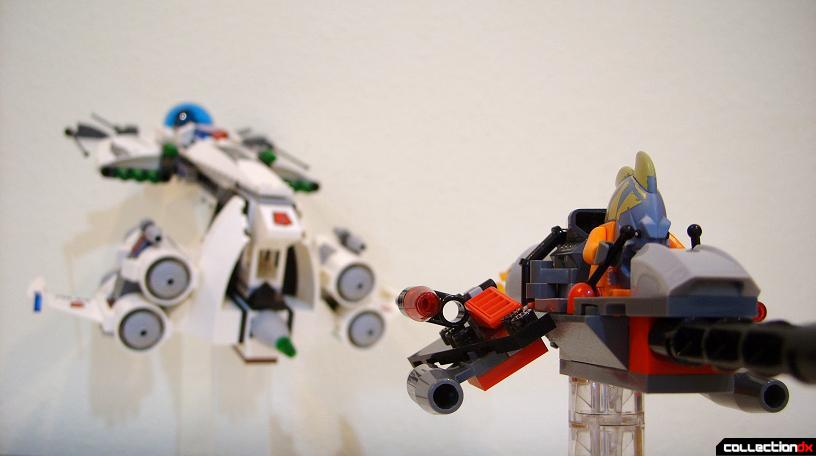 Despite being composed of only three connected sections, the Undercover Cruiser somehow manages to pull off a different look for both modes. Ahh, those cleaver Space Police and their surprise intergalactic speed traps…