Ultra Act is Bandai’s line of six-inch hyper-articulated Ultraman figures, in the same vein as lines like SH Figuarts.  Ultraman Tiga is an Ultra series I haven’t seen yet, so hit up Wikipedia if you’re looking for more info on the series.  I know it was the ‘triumphant return’ of Ultraman to television after a long hiatus, and was the first series to feature an Ultra hero with multiple combat modes, represented by multiple costumes.  It’s probably a cool show.  Dark Tiga is from a follow-up movie. 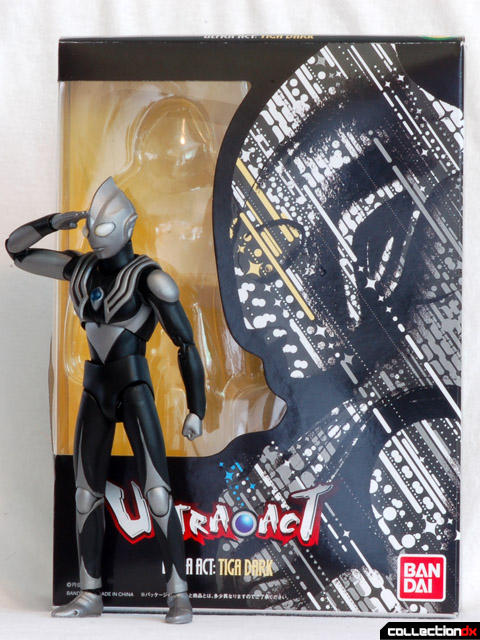 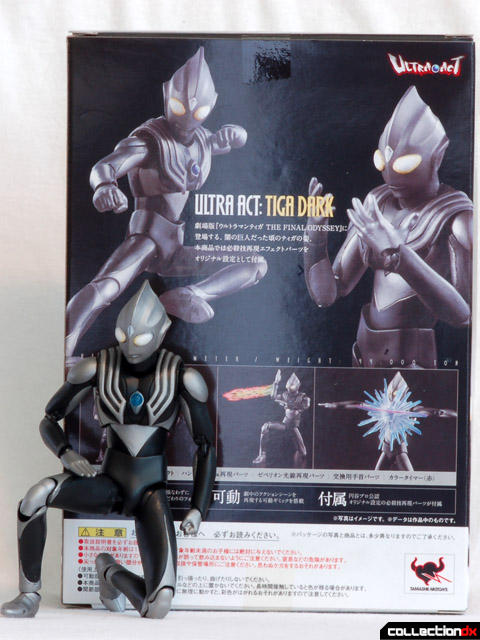 Ultraman Tiga Dark is the exact same mold as Ultraman Tiga Sky Type, with a snazzy black and gunmetal paint job and some different accessories.  That, and attitude.  The box is still great, with a dark palette to the graphics. 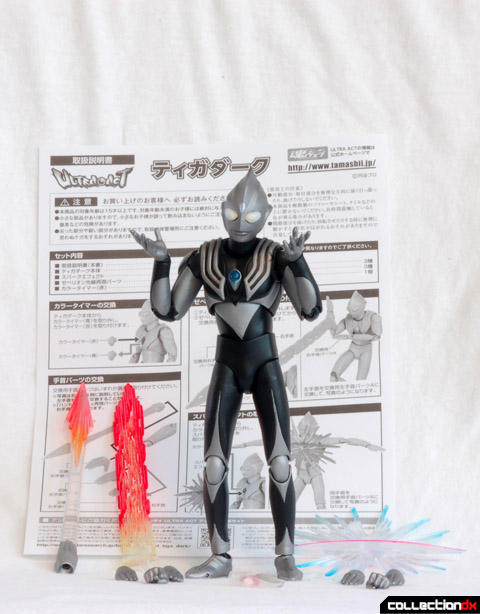 Dark Tiga moves just as well as the Sky Type, so check that review for the basics.  We’re going to get right into the accessories here… 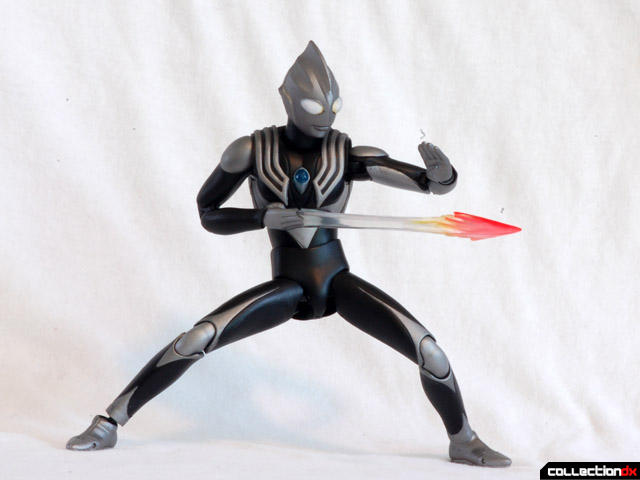 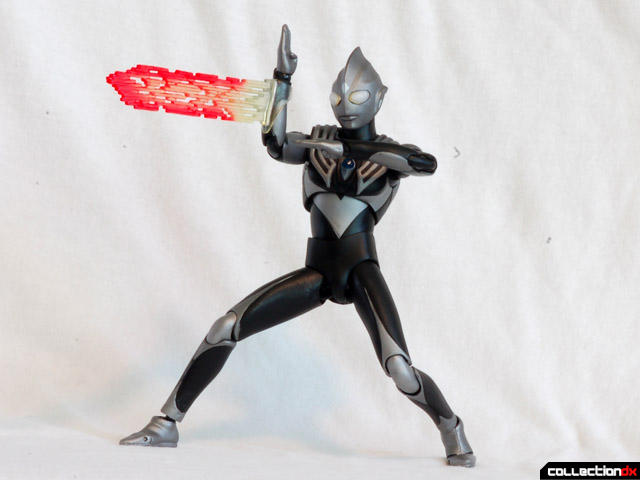 Dark Tiga comes with two ranged attack effect parts.  One is the same as from the Sky Type box, while the second is actually the classic Ultra beam attack from the original Ultraman’s arsenal.  The classic beam slips around the wrist, and looks really convcining. 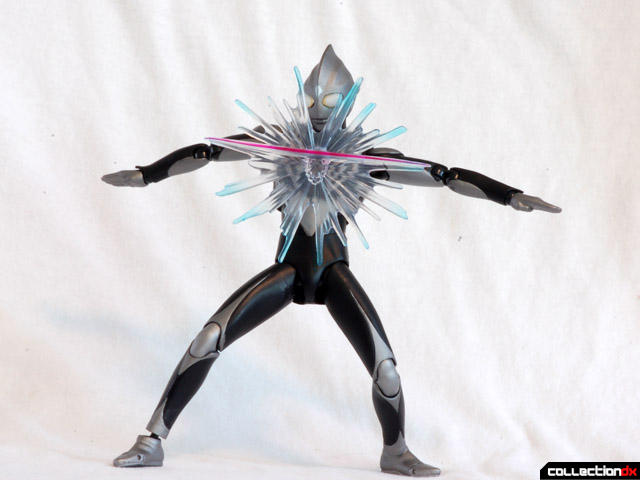 Dark Tiga also comes with a slash attack effect that fits onto his chest where the timer light goes.  This one isn’t as convincing, but is still pretty neat. 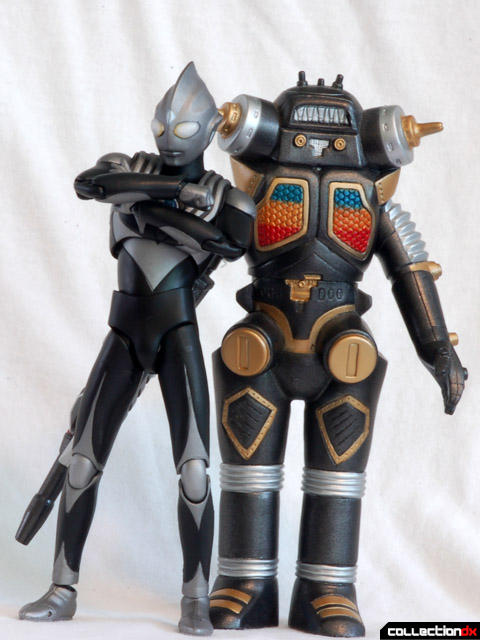 As a black, evil repaint of Ultraman Tiga, Dark Tiga looks great with King Joe Black.  I like to pretend they are partners in evil. 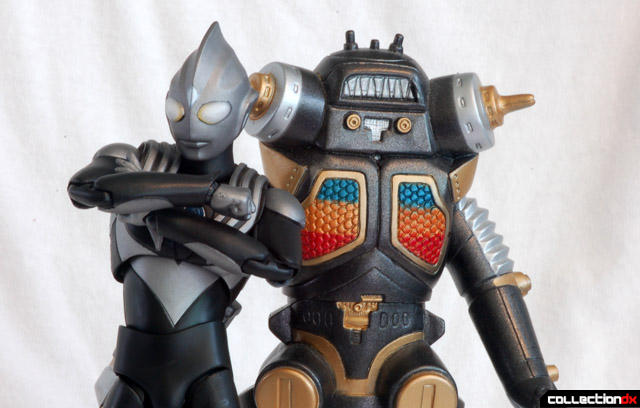 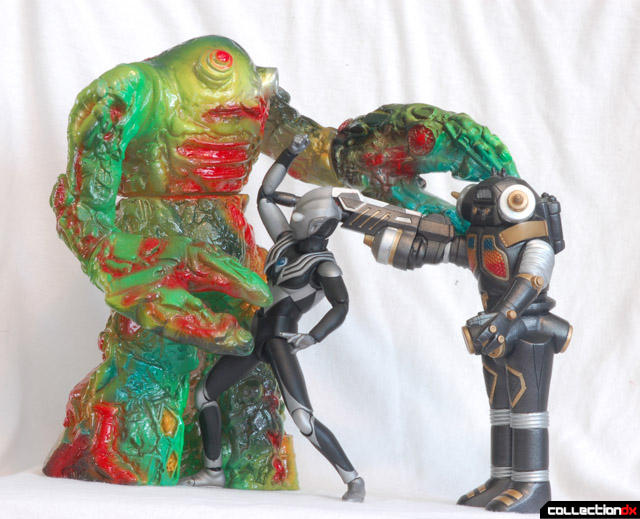 Dark Tiga looks great duking it out with some kaiju… 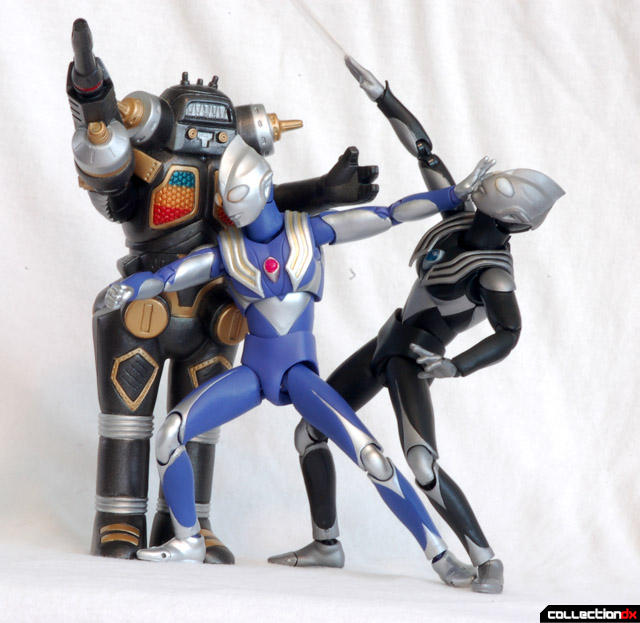 …but really comes into his own when you add in Tiga Sky Type.  The two super articulated figures play off of each other really well.  Dark Tiga is slick and sinister, and makes a great foil to the heroic Tiga figure.  The real question is, with so many foes gunning for him, can Ultraman Tiga hope to survive?... 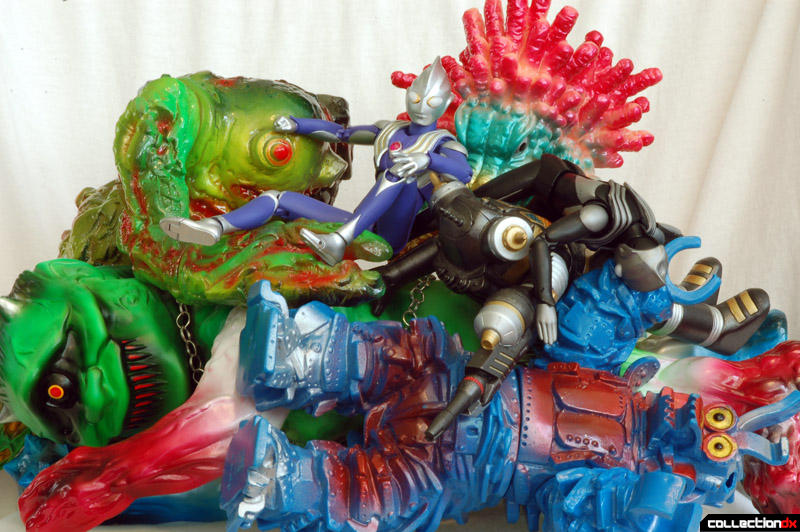 …what do you think?  These Ultra Act figures are a really good time, and super nicely made.  I guess they might seem a bit pricey at almost $40 each, but when you compare it to something you’d buy from Hasbro at Target, there’s almost no comparison.  These figures are gorgeous, with flawless QC and the ability to do pretty much anything you can think of.

Review sample provided by Tamashii Nations. You can get yours at BigBadToyStore, and if I were you, I totally would!

3 comments posted
I love the pose with his arms

I love the pose with his arms crossed, perfect! Great review as always. BTW, do the Tigas pop off the waist easily? My Ultra Act Ultraman pops off just by looking at it

Thanks. That arms crossed pose wasn't easy, but I thought it really demonstrated how awesome these figures are. My Tigas don't come apart at all... the hands swap on very tight balljoints, and the ankles have ball joints for really deep movement, but you have to work to get them off as well.

Nice pics. I havent watch the show in ages but I think the effect on his chest is for when he's readying his finishing attack. And FYI Tiga and Tiga Dark are the same being. And he's no so 'bad' lol.