"God damn you half-Japanese toys, you do it to me every time.."

So there I was, wandering around my local flea market, looking for my bootleg toy fix. I pass by the booth where the Vietnamese family had a toy shop. I used to get a ton of bootlegs there, hell, they populated the bootleg section of my old store Cybertoyz. It's all gone now though, replaced by someone selling those electronic pictures with shimmering water. The whole place smells.

Most of the bootlegs are gone, replaced by junk ordered through discount catalogs and questionable food stalls. However, about half way through I find a light in the darkness.. toys!

This stall had mostly clothes, bootleg shirts with Michael Jackson on them, and bootleg handbags, but there were a few toys hanging on giant cards. I am a sucker for giant cards.

I grabbed this Bumblebee for $17.00 - I tried to talk the lady down but she wouldn't budge. Definitely not those people I used to go to. They also had a bootleg of the big Movie Prime from the first movie, and something from the cybertron series. None of them seemed like radical bootlegs aside from the packaging, so I picked bumblebee because I could never justify the almost $100 for the legit version.

When I got home, I looked at it and felt dirty. I felt shame.

The toy comes carded, as I mentioned before, on a GIANT card. The thing must be 2 feet tall. It's insane. The thing is all written up in Chinese, with images on the back of the other toys in the line. 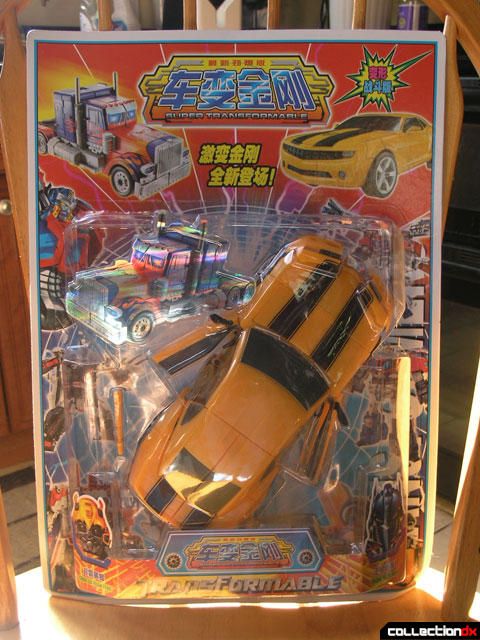 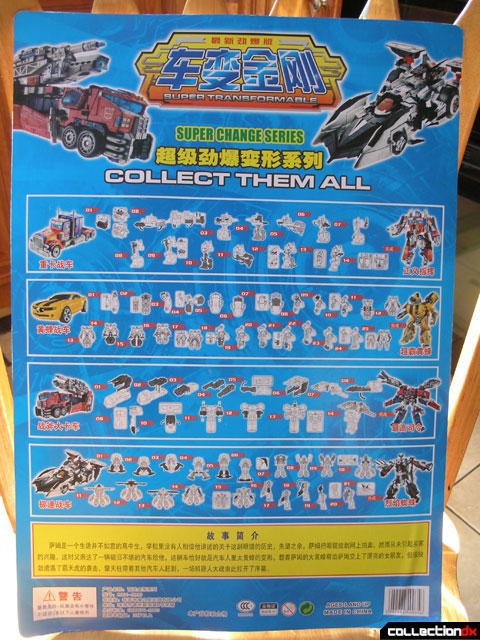 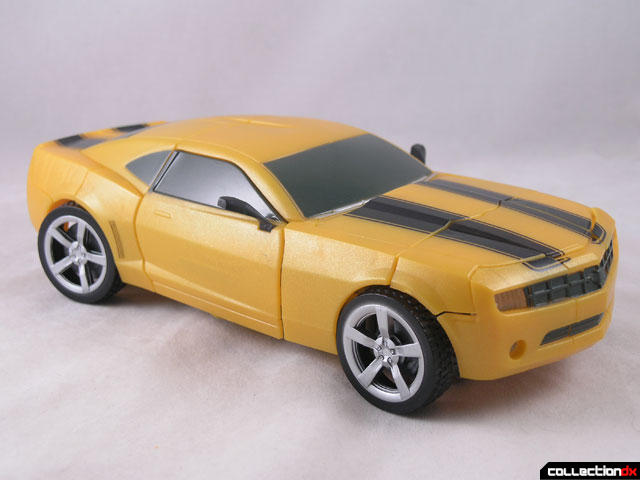 Bumblebee is packaged in car mode, so we will start with that. This toy is based off of the Hasbro Ultimate Bumblebee toy which features lights and sound, but all electronics have been removed from this toy. The plastic is bootleg-quality but has a nice metallic sheen to it. The paint is so-so, and all Transformers and Chevy branding has been removed. If you look at the front you can see where they tried to scratch out the sides of the Chevy Bowtie emblem on the grill. 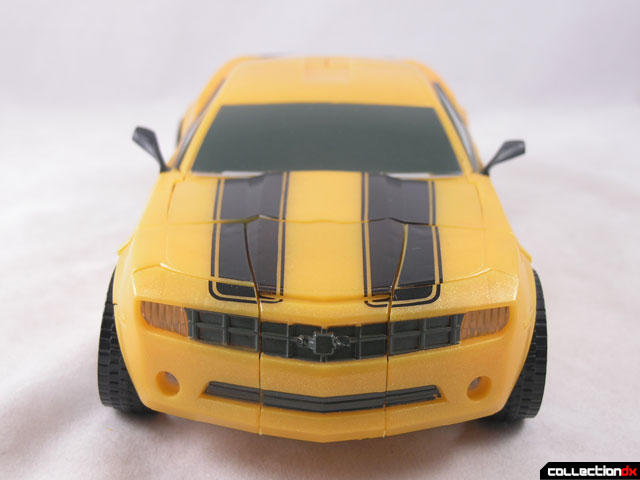 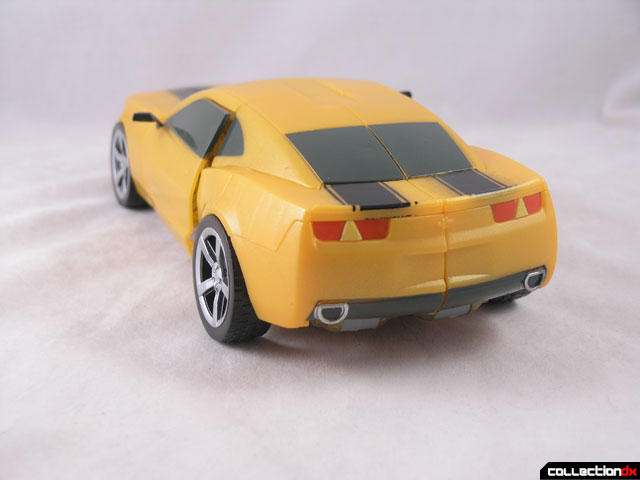 Parts don't fit quite right. The doors don't line up well. You pick it up and it immediately begins to dissasemble.. er... transform on its own. There is noticeable paint on the front wheels. 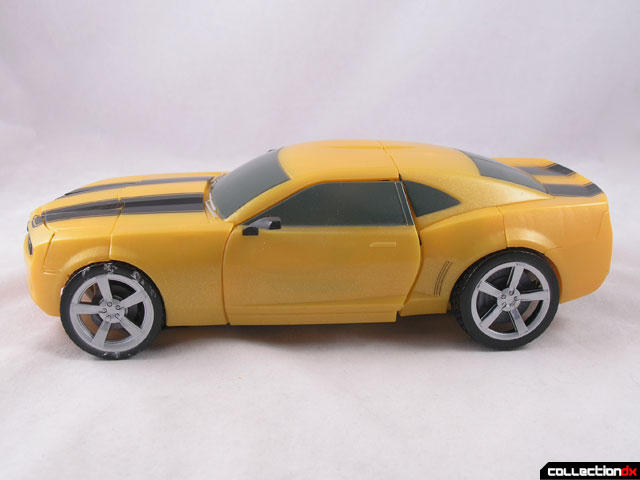 Flipping the car over you notice that the button hole has been covered, and there is a surprisingly nice wash over the body, giving it a nice weathered look. 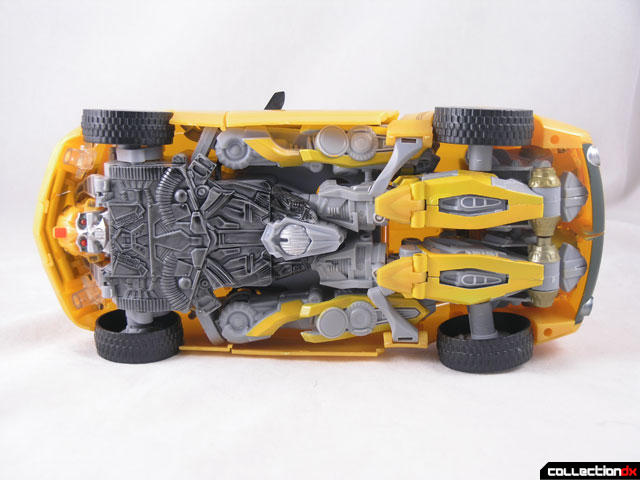 Transformation is the same as the original, but with far cheaper materials, so things tend to break. The doors came right off, with the small black tubes holding them on crumbling in an instant. The clips inside the front fenders also broke off.

Aside from that though, the rest of the transformation is trouble free. Bumblebee is tall and looks good. He's pretty well articulated and he stands well. The missile launcher is retained in the arm, but only comes with one missile. 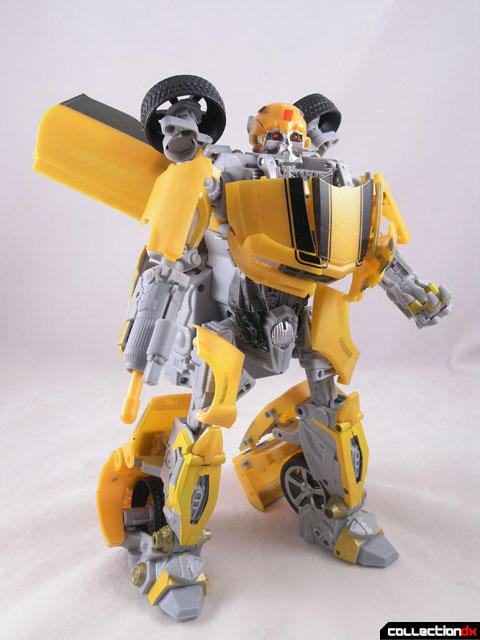 If anything, this bootleg has inspired me to maybe track down the original. Seems like a cool toy. 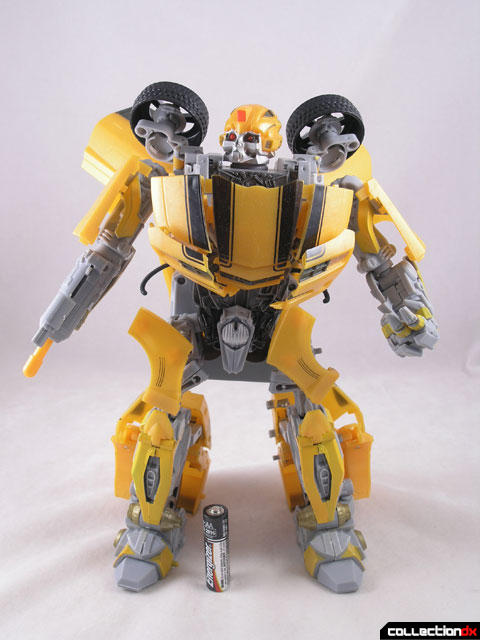 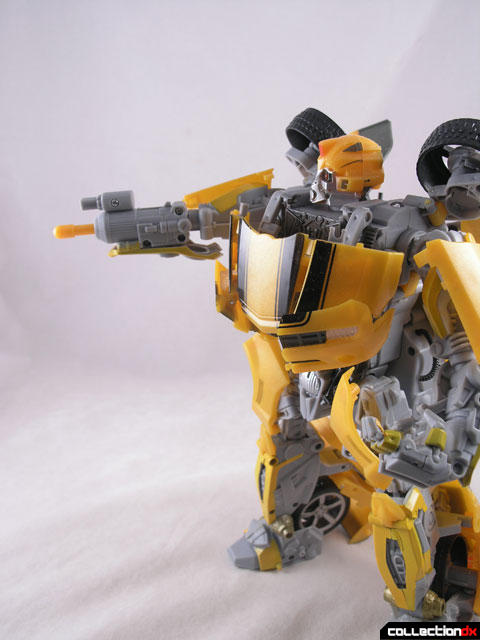 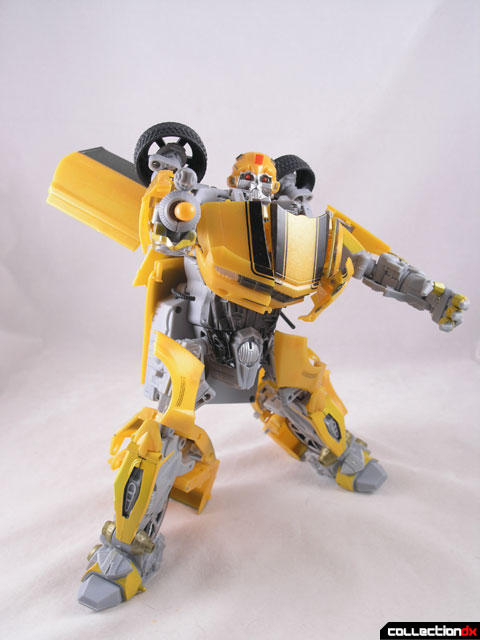 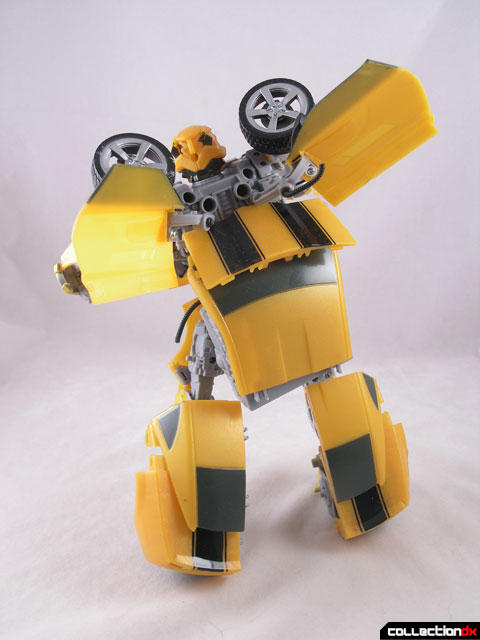 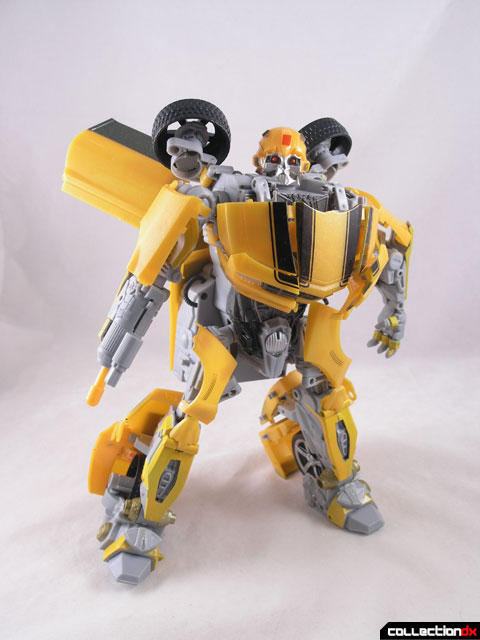 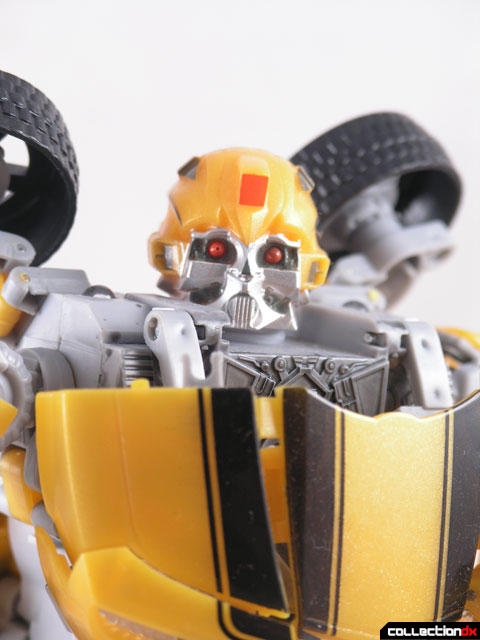 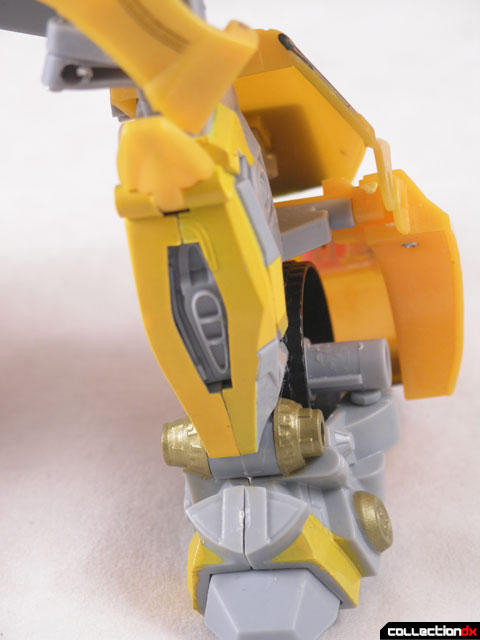 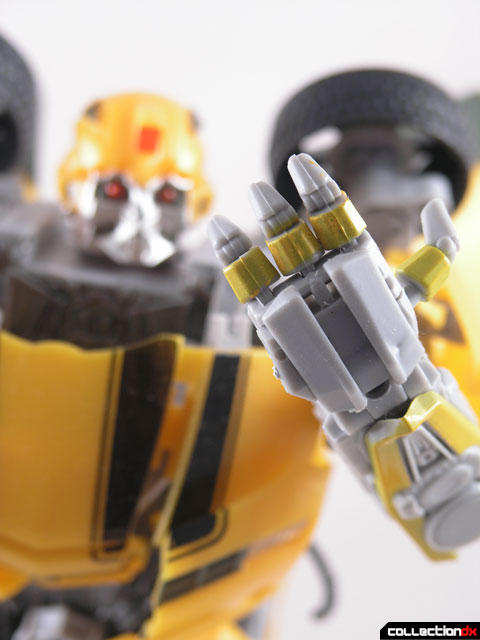 You said it all right here:
The doors came right off, with the small black tubes holding them on crumbling in an instant. The clips inside the front fenders also broke off.
Aside from that though, the rest of the transformation is trouble free.
-WTF?
Thanks for the sacrificial flushing of your own $ on this, but was it worth the review?
I would never buy any of these "Giant-Card Boot" releases = Overpriced, garbage-quality.

You could get a MISB Sorokage for double that money and have had a real toy.

It satisfied my curiosity, so i guess in that regard I got what i paid for it. Keep in mind, when I say things like the above quoted - I am coming at it from an expectation of crap quality, because it is a bootleg after all. So the fact that those were the ONLY major problems with it is actually surprising.

Or maybe I am just glutton for punishment.

For whatever strange reason, I keep thinking that CDX already covered Ultimate Bumblebee in 2007...?

If you had read the article, you would know this was a review of a bootleg of Ultimate Bumblebee.

Oh, my bad. I didn't see any articles about the original toy when I did a search.

Me either; that's why I was puzzled.

Ever since Pennsylvania, it's been all Ween, all the time. Oh, and thanks for throwing away and not photographing the only thing about this I might have been interested in. ;)

I know i took shots of them in card, and just couldnt find them... Lo and behold...

Walmart had the real thing for $35 at one time. There was a mad rush to buy them up then. Whole pallets of them gone in one day. Story was that there was a mistake somewhere down the line and it was corrected within a week.
Who knows, maybe it will happen again.

I miss giant blister carded bootlegs from flea markets. Josh, remember that Season 2 Power Ranger Megazord with the Tiger Zord, limbs, and really random original power-up torso piece that came on a super big card? That was a really, really good one :D These days, I get my bootleg fix from Tuesday Morning, and their bootlegs are tiny.

There's no such thing as an Ultimate Bumblebee. Hasbro & Tomy misdeveloped the whole, blasted toy up. It's hogwash.

I agree. I was never into the figure either- the transformation wasn't solid, and there was too much kibble.

The reason that I've said that is the very fact the giant-sized Bumblebee that came out in 2007 and this year is because it doesn't validate the word 'Ultimate' as the Buster Optimus Prime that's nearly $100.

That IMO is an ultimate ripoff.

BTW, I'm looking forward to reading your Star Trek DVD movie review. I've just bought a copy but I haven't opened it yet. Thought I read the review first.

In Vietnam , we've sold tons of Chinese toys and they were very cheap , the DX Juuken Gattai Geki Touja made in China was just about $10 :| , and when I bought it , the PVC were smelly , and guess what , the tails have broken :( . I hope Japanese toys would be more cheaper so that everyone in my country can buy it , most of people who play Japanese toys in Vietnam are very rich .