In addition to being released separately in individual boxes, all 5 of the U-Combine Shogun Combatra vehicles were released in a large boxed set. Retaling at $49.99, this set was the highest priced item in the Shogun Warriors line and is believed to have been sold only in high end department stores. (My specimen still has a Macy's sticker on the box.) With a high price tag and limited availability, the U-Combine Shogun Combatra Deluxe Set today is one of the rarer toys in the Shogun Warriors family. 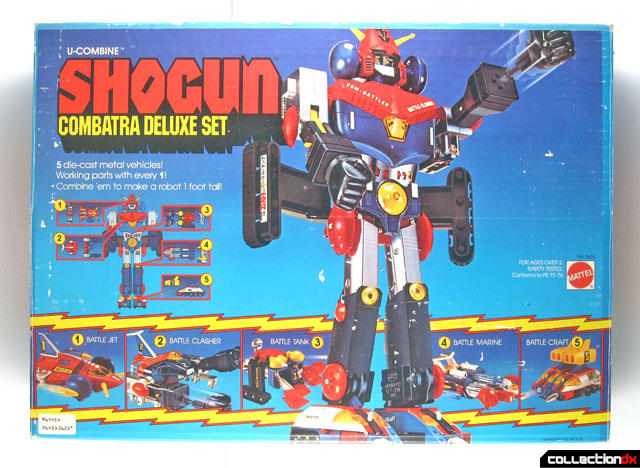 This set comes packaged in a sturdy cardboard box measuring 18" x 13" x 4". A separate full color printout is attached to the front, bottom and sides, while the top and back has the artwork printed directly onto the cardboard. 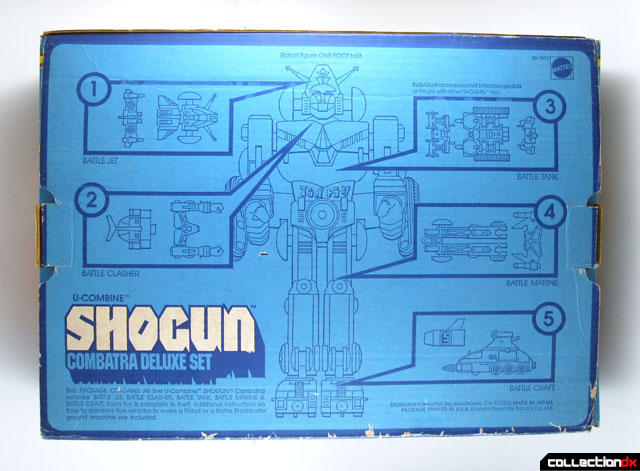 The way it's packaged inside is pretty unusual. Normally with a set like this, you would see one big styrofoam tray with room for all of the individual parts. In this case, what we get is more cardboard with an insert that has spots cut out that the individual styrofoam pieces are then placed in. 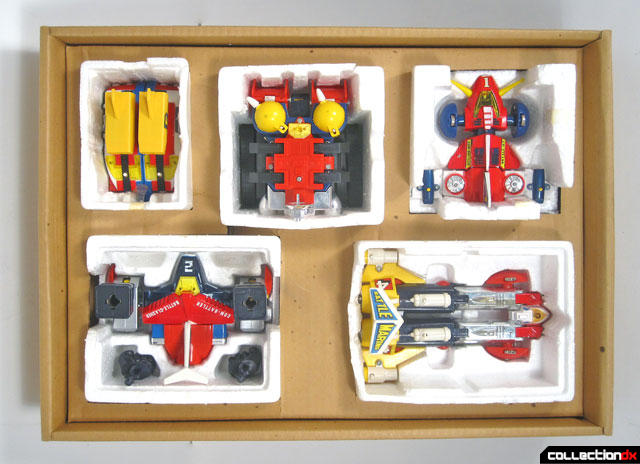 I've already reviewed each vehicle separately so it's time to get down to the business of combining them all to form Combatra! First, get all of your individual pieces ready by removing any of the superfluous parts. 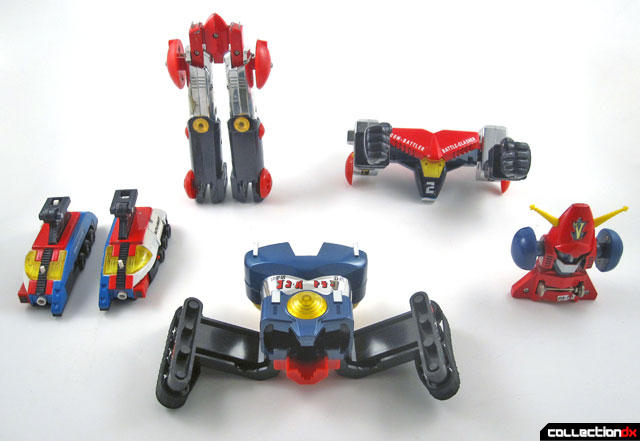 It's best to start with the Battle Craft, which separates to form the feet. 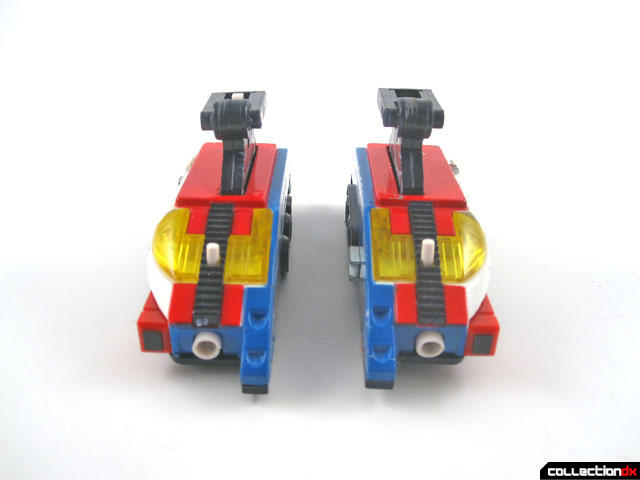 Next, use the Battle Marine to form the legs and slide it onto the tabs on the top of the feet. 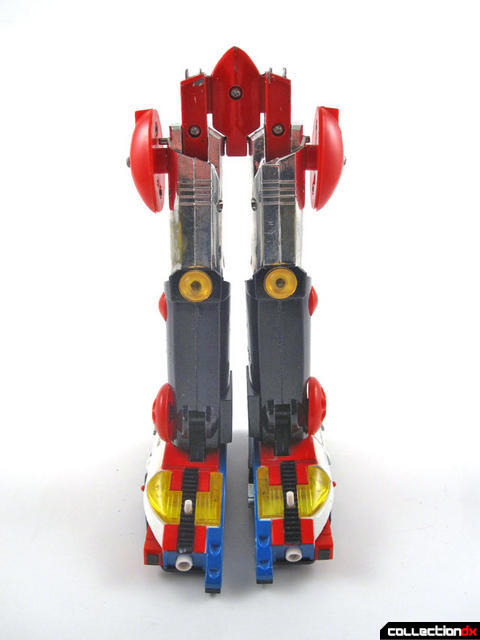 The top of the Battle Marine can then be inserted it to the Battle Tank to form the pelvis. 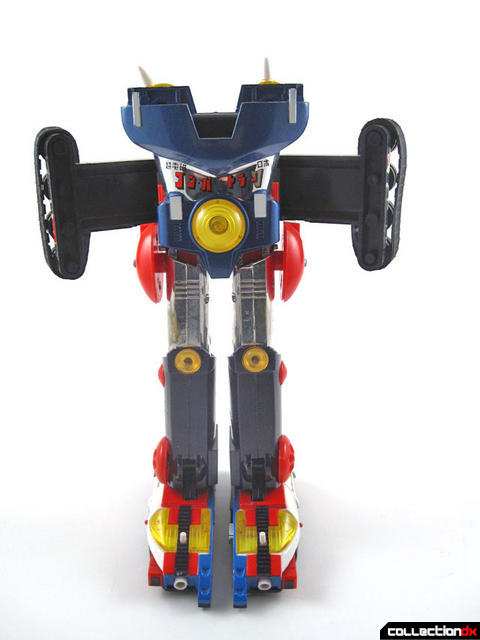 The Battle Clasher goes on top to form the chest and arms. 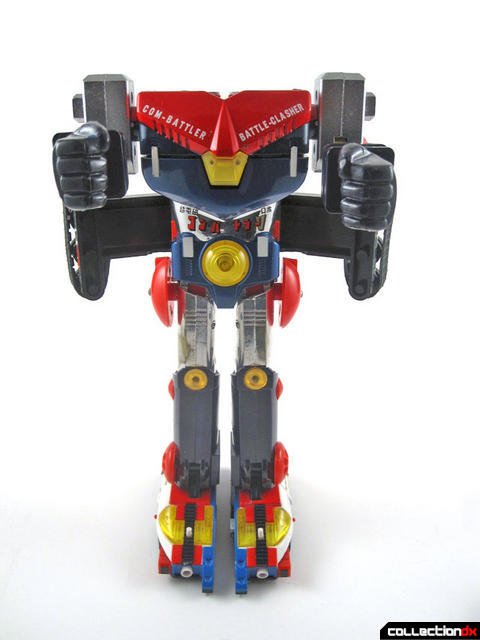 And of course, the Battle Jet is inserted into the Battle Clasher and forms the head. 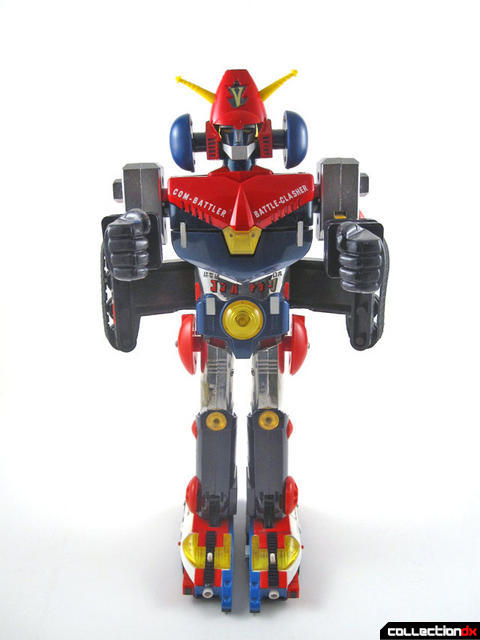 At this point, you're almost done, but to keep the whole thing absolutely secure, a single suspender is included. This wraps around the back and hooks into the shoulders. At first, I thought this was pretty dumb looking but I've come to appreciate it's silly charm. 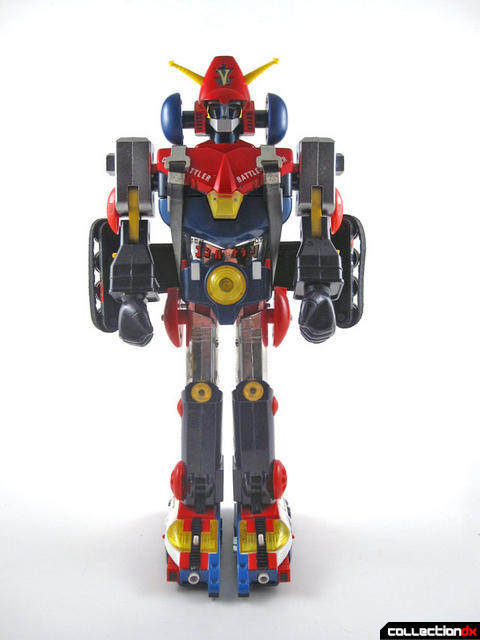 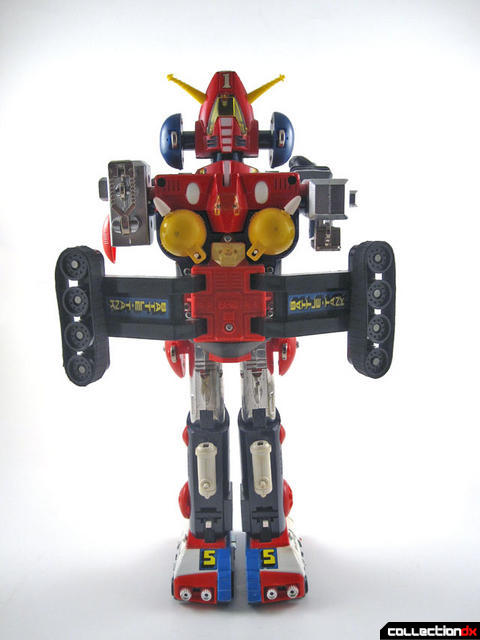 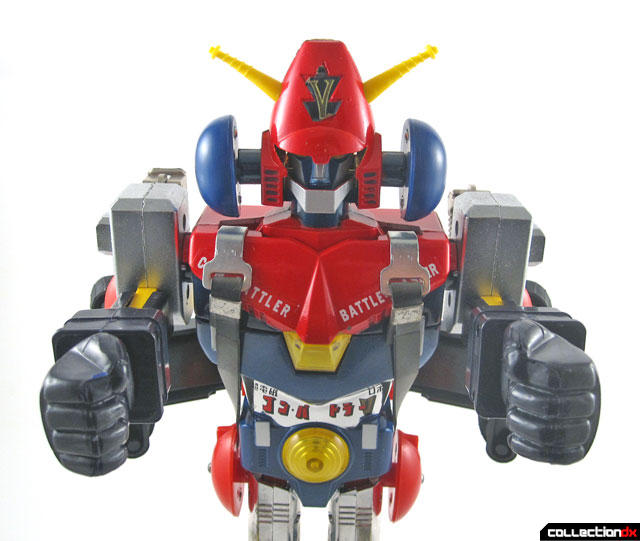 I'll be honest. I used to think this was a pretty ugly toy. But now that I have one on my own shelf, I've come to appreciate it. I think it would look a little nicer if you could remove the treads of the Battle Tank, but aside from that and perhaps the feet being too large, it's a much nicer proportioned robot than it appears at first glance. 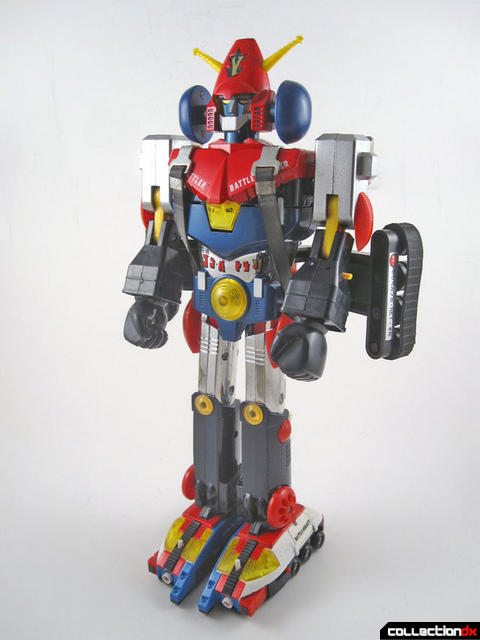 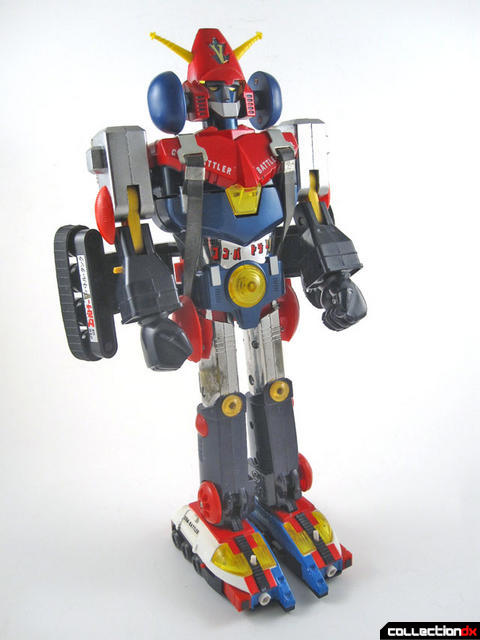 Of course, if articulation is important to you, you may want to look elsewhere for your Combatra fix. This guy can only really move at the elbows and shoulders and even there, your options are limited. The knees and hips can also bend, but it seems more for weight distribution than actual poseability. 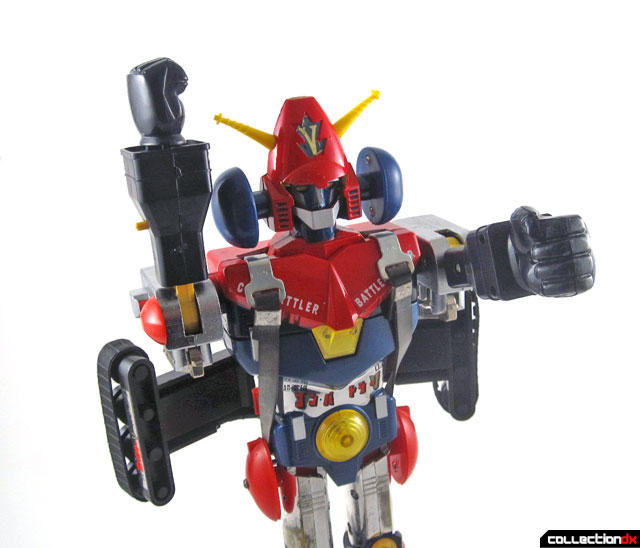 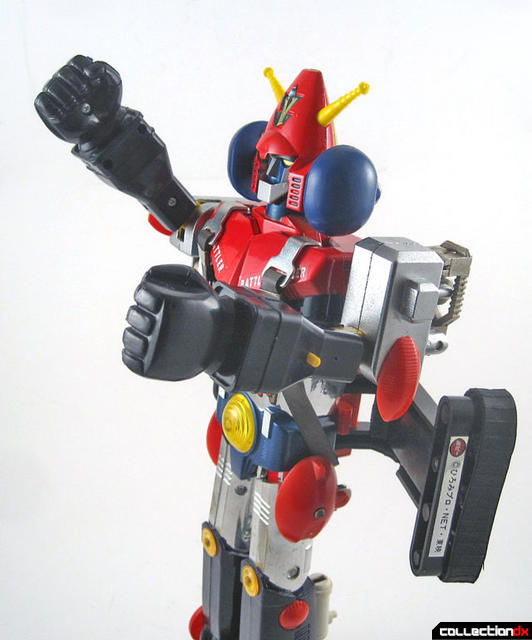 Lastly, Combatra can also transform into a heavy tank mode. Basically, the feet fold and it lays down on it's stomach. 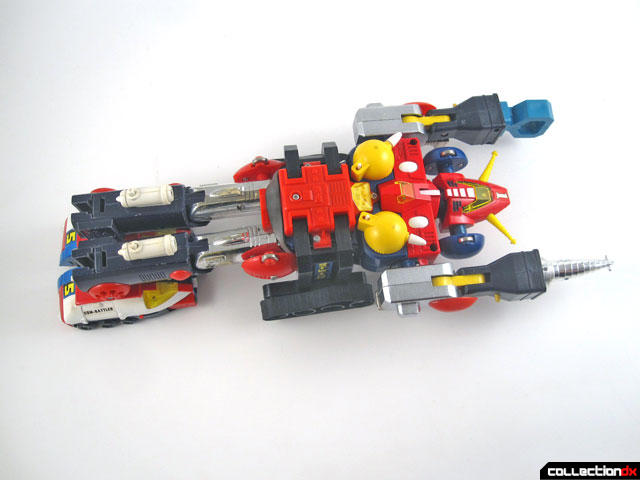 Not only was this toy released in Japan by Popy and in the US by Mattel, but it was also released in the US (in two different Godaikin boxes, I believe) by Popy's parent company, Bandai. You can read our own Modcineaste's review HERE

Liking this box Combattra. I should get one someday, as it really has great simple and loud graphics for display.
It was cool to direct compare the fist mounting pattern between all the newer releases with the plus shape connector into the launcher (+), and the weaker early Popy flat connector (-). Nice pics on the whole set.

I didn't realize that this Shogun U-Combine box set inner tray does not really have room for each of the 5 piece foam trays to have their individual boxes stuffed in there too.

Oh yeah, I forgot about the fist connector variation. We should have taken pics of them side by side at the SRGM show!

I WILL own one of these eventually...even if i have to sell a kidney. I remember seeing seeing one in the toy section at Hecht's back in the early 80's and pleading to my parents to buy me it for Christmas. FAIL. Great Review sir!

I have one and the only thing it's missing is one of the battle crafts. Do you know anywhere to buy one? If not I will probably try and sell it.