For those unfamiliar with it, Exo Squad was a cartoon from Universal Animation Studios that premiered in 1993 and ran for two seasons, for a total of 52 episodes. While the show had a decent following at the time, the shift to a 4 AM timeslot and reduced interest resulted in the cancellation of the third season; though thankfully, the main plotlines from the first two seasons were resolved by then.

Exo Squad drew inspiration from Japanese cartoons of the 80’s which lead to some referring to it as “the original American anime.” In fact, Playmates eventually expanded the line by re-releasing toys from the Robotech toyline, such as the Invid Shock Trooper and Zentraedi Commander Battle Pod. At one point a crossover between the two licenses was planned but the idea was ultimately abandoned.

This particular toy is of the Neo Sapien General, Typhonus. Unlike most of the main cast Typhonus did not use a special customized Exo Frame (E-Frame). Instead, he preferred the mass produced “RA-643 Supersonic High Speed Stealth Attack” (whew, a bit of a mouthful) E-Frame, which sacrifices heavy armor for greater maneuverability. 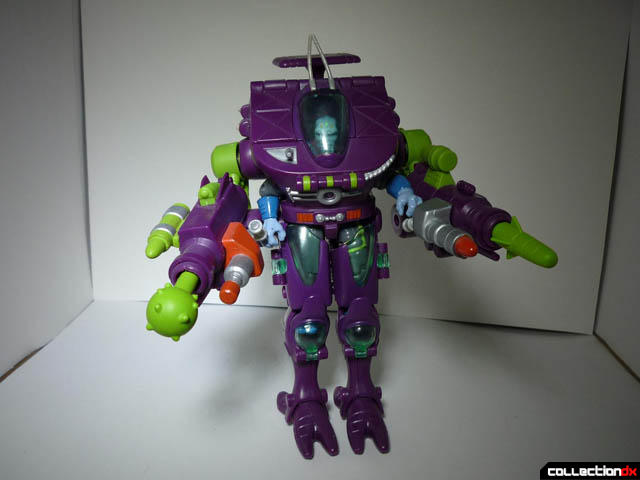 The influence of shows like Macross is immediately apparent from the curved alien design and prominent use of purple and green. The articulation isn’t terribly dynamic, but it allows for a few poses. It looks pretty good just standing there, which is good because, due to his skinny legs and high center of gravity, it’s hard to balance him doing much other than standing still. 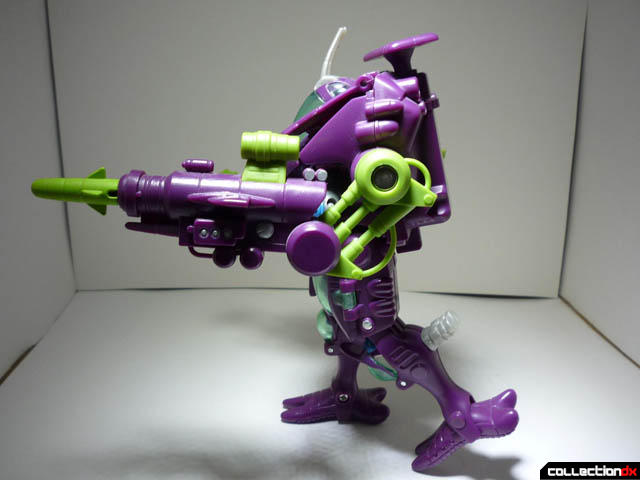 Hard, but not impossible.

Typhonus’ E-Frame rotates 360 degrees at the shoulders and ratchets at each elbow. The legs also go back and forth slightly, and bend at the knee as well as the ankle. Due to the limited range of motion, I found it a bit difficult to get Typhonus’ hands on the handles, but it looks good regardless. It would look better if I still had the stickers from the included sheet. Each E-Frame also came with a set of blueprints for that particular frame, but my box is long gone.

The RA-643 makes up for its limited articulation with some neat features, including two hidden shoulder missile bays that can be opened manually. Each missile bank can be launched by pushing on the extended section that sticks out of the back. 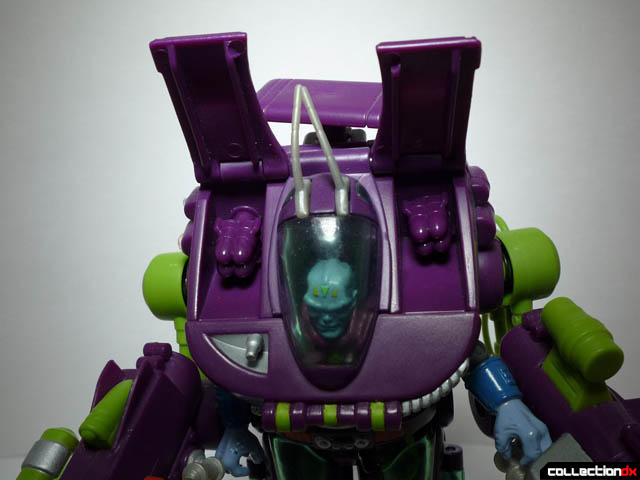 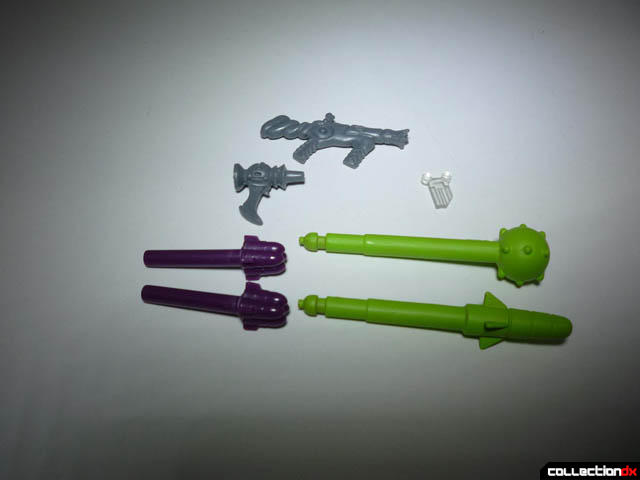 It also has a radar dish that rotates 360 degrees and can either be moved manually or by using a dial on the E-Frame’s back. On the back you can also see the removable clear energy cell that powers the E-Frame. 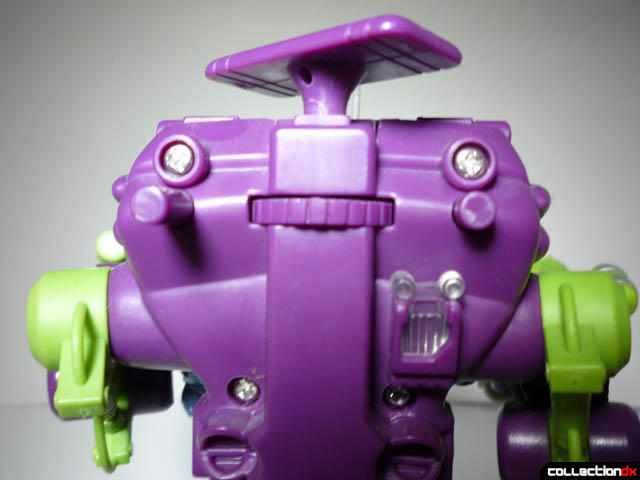 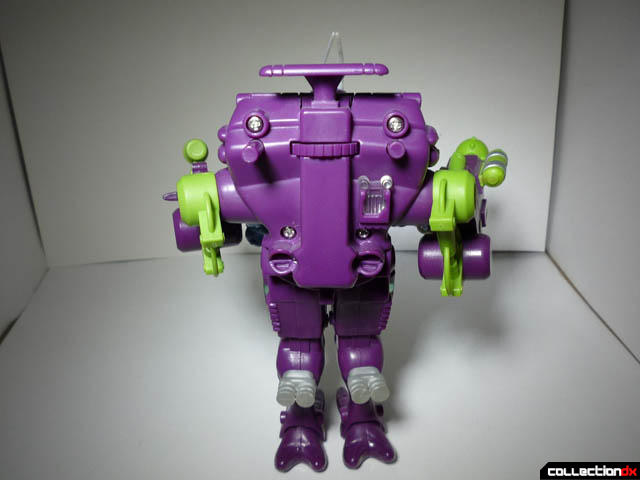 It also features missile launchers on both arms, though only one looks like a missile, while the other resembles a morning star. It’s been a while since I’ve seen the show but I think that this was just Playmates taking some artistic licenses with the design. 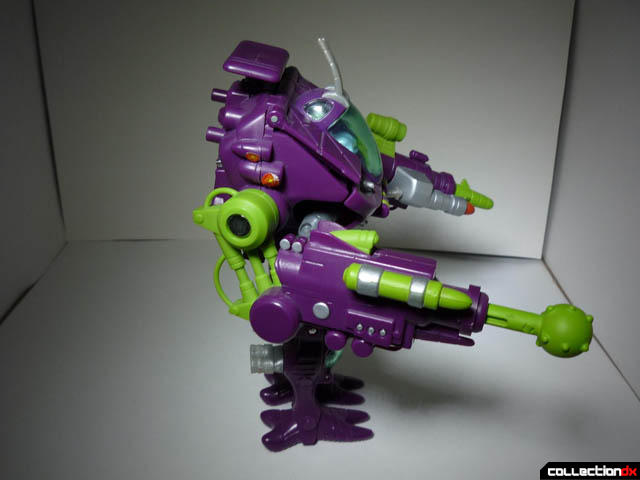 When you’re done messing around with the E-Frame, the legs and chest pull away to reveal Typhonus himself, who is held in by a clip around his waist. 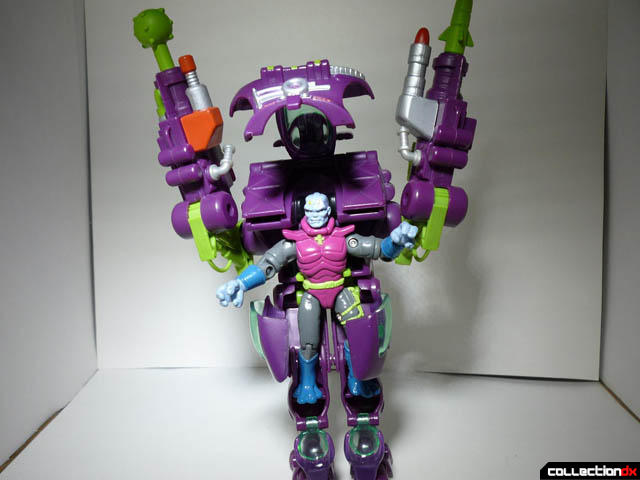 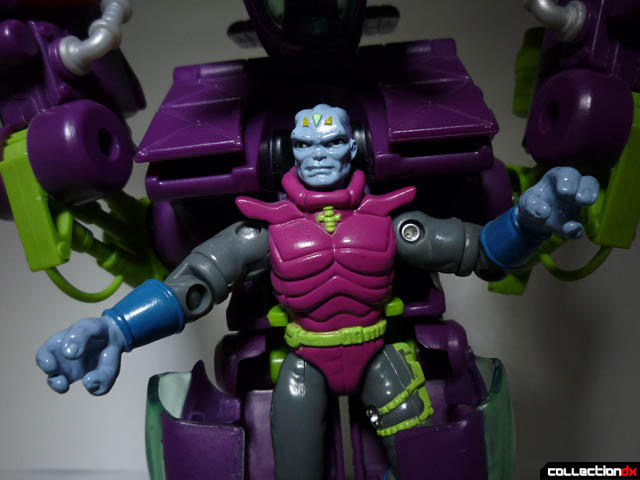 There is also a cord that comes out of the seat and plugs into a hole at the base of Typhonus’ neck. In the show this is how E-Frame pilots interface with their suits to better control them. 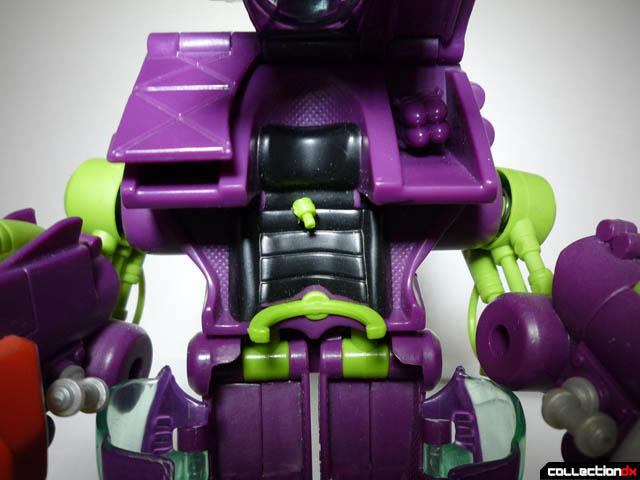 Typhonus stands about two inches tall and fares better in the articulation department than his E-Frame. He can swivel at the head, has rotating and swiveling shoulders, swivels at the bicep, and bends at the elbow. The legs feature ball joints at the hip and bend at the knee. There is no articulation at the wrists, boots, or waist. 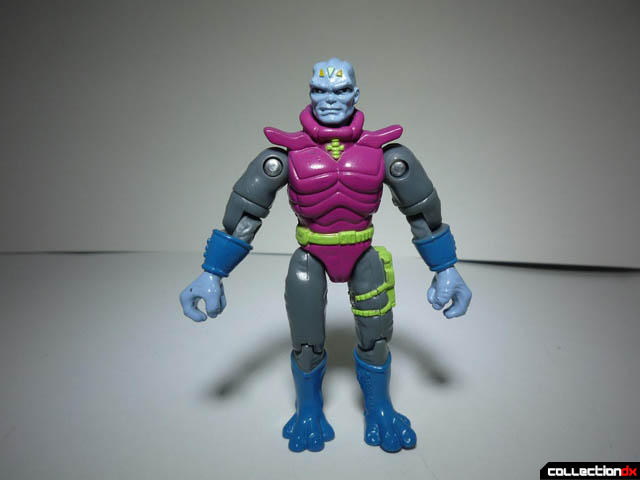 Typhonus’ uniform continues the theme of green and purple with some nice details like a molded gun on his left leg and the alien markings on his forehead. Though to be fair, Neo Sapiens aren’t entirely alien as they were genetically engineered by humanity as a labor force during the colonization of Venus and Mars.

Typhonus comes with a rather alien looking rifle and pistol that he can use outside of his E-frame. Due to the shape of his hands, however, he can’t hold them straight. 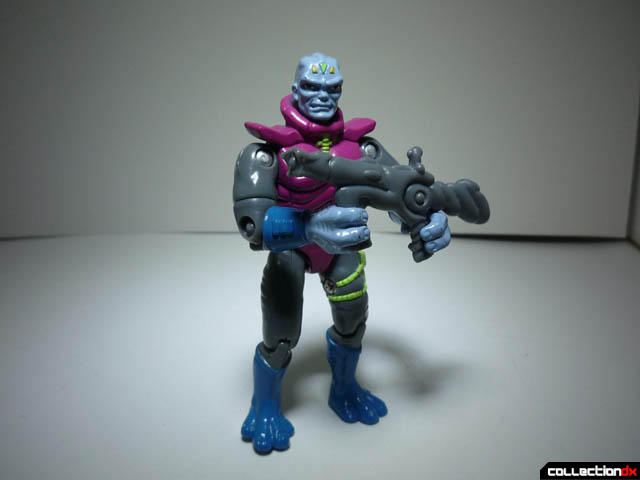 My Typhonus has gotten a bit loose after all these years on the shelf so he pretty much only stands straight up, but his arms still support the weight of the weapons fairly well. 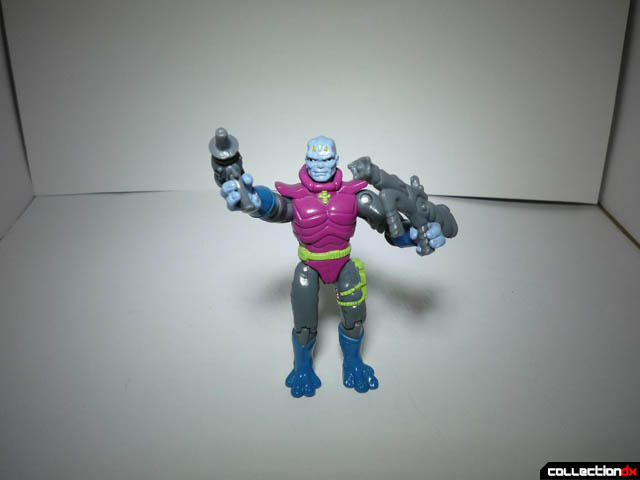 Exo Squad was a commendable attempt to create a domestic science fiction series for kids in the vein of Japanese shows of the previous decade, rather than adapting an existing series as had become popular by the time it premiered. The toy line featured a wide variety of vehicles with different designs and gimmicks, and even for kids who didn’t watch the show it wasn’t hard to imagine various epic space battles with all of the great toys in the line. It’s a shame that there haven’t been many other major attempts at creating domestic space operas for Saturday morning, but Exo Squad still retains a cult status for both its willingness to try something new in the American market while also paying homage to the great shows that paved the way for its creation.

2 comments posted
Ah, Exo-Squad. Nothing not

Ah, Exo-Squad. Nothing not to love! I wish I would have gotten more than the one figure I got back in the day. My friend had one of the larger mechs, and it was awesome! Heck, the whole toyline was awesome. Too bad there hasn't been another mech toyline since...

Good (first?) review! I have recently dipped my toe into this line and I appreciate the background. There's a lot of play value here and surprisingly good design for an American property.