Blizzard Entertainment's Starcraft is a game that needs no introduction.  Starcraft II was one of the most anticipated games of all time.  One of the greatest Real Time Strategy games of all time was brought into the modern era, and all I could do was scream 'I want toys of that!' 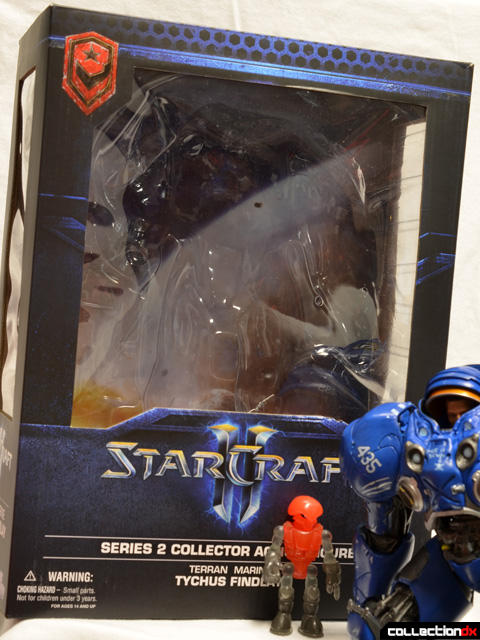 Fortunately, DC Direct (now DC Collectibles, for whatever reason) was happy to oblige.  They have released two waves of figures so far.  Most of the figures are more like semi-articulated statues, but for one of the most iconic Starcraft designs, they went all out. 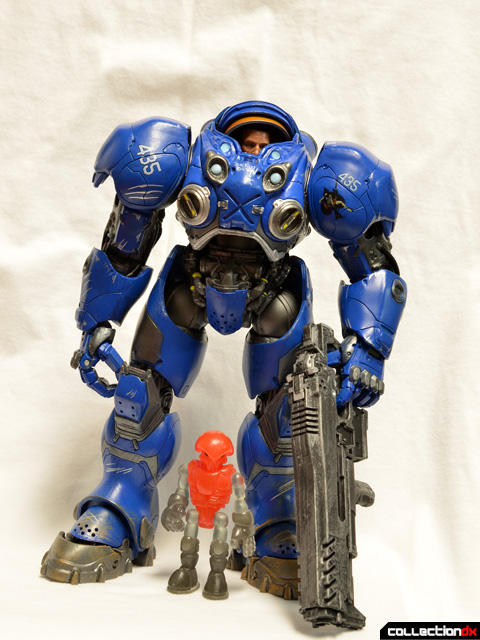 Tychus Findlay is a Terran Marine that plays a pivotal role in the story of Starcraft II, and a jerk.  Tychus wears the standard Confederate Marine Corps Powered Combat Suit, lovingly rendered in hard and soft PVC.  Tychus stands around nine inches tall. 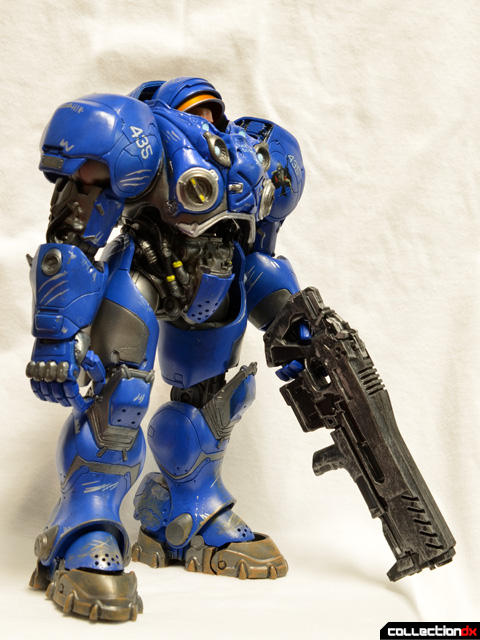 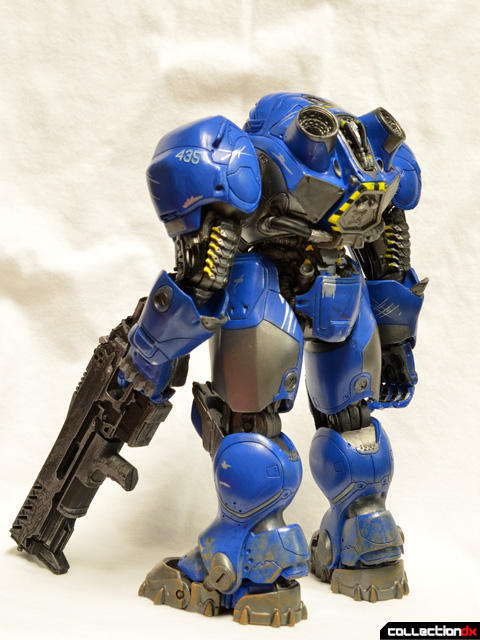 Tychus is an absolute beast of a figure.  He's thick and heavy and just... big.  This is a toy that could be used for murder. 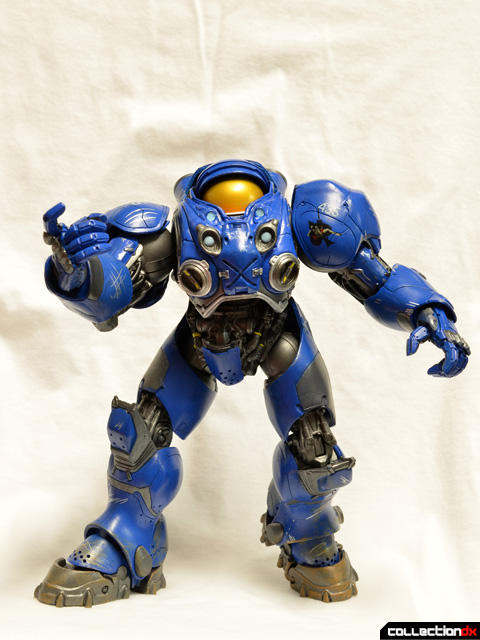 Everything moves, but not a whole lot.  The sculpt of the armor limits articulation quite a bit, but the designers made an admirable go at making Tychus move.  The fingers on the right hand are even articulated like an older Gundam model, trigger and three fingers. 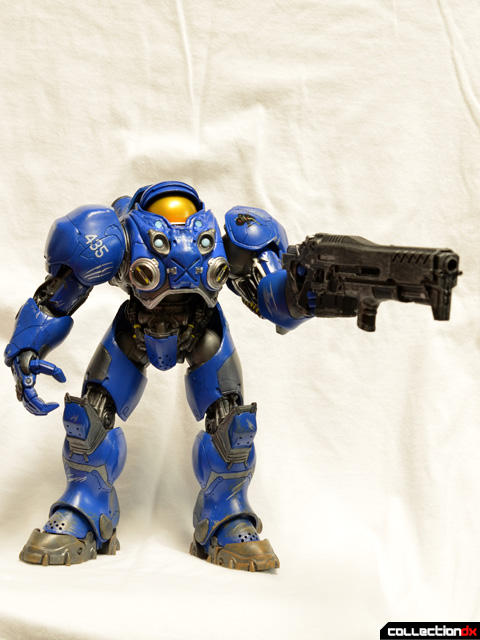 Tychus can hold his C-14 Impaler gauss rifle in either hand, but the left hand is specifically sculpted in a trigger grip.  The gun is hollow, lightweight plastic.  It feels a bit cheap compared to the figure, but being light means Tychus can hold it no problem. 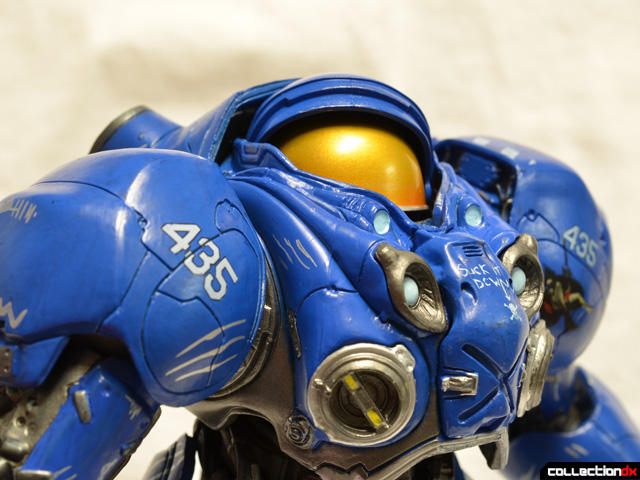 The paint and detail are really fantastic.  There are a number of printed decals on the figure, as well as some silver battle damage.  Everything is clean and sharp, with no overspray or slop that I could find. 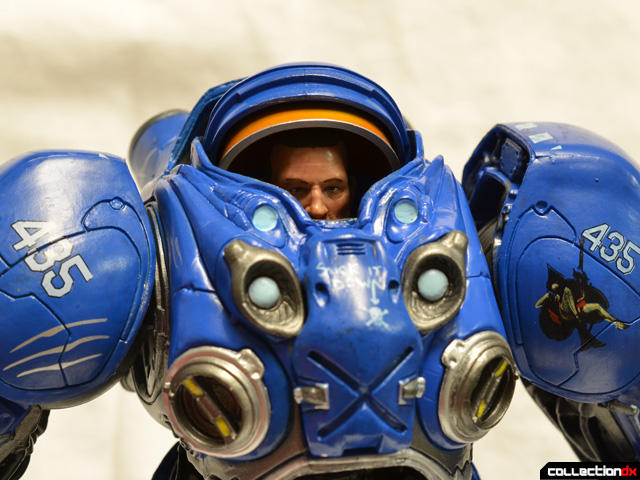 The visor lifts up to reveal Mr. Findlay nestled deep inside his armor.  The sculptor did a really great job of burying Tychus in his armor, adding to the bulky feel of the figure.  The headsculpt is good, and nicely painted, and can rotate at the neck. 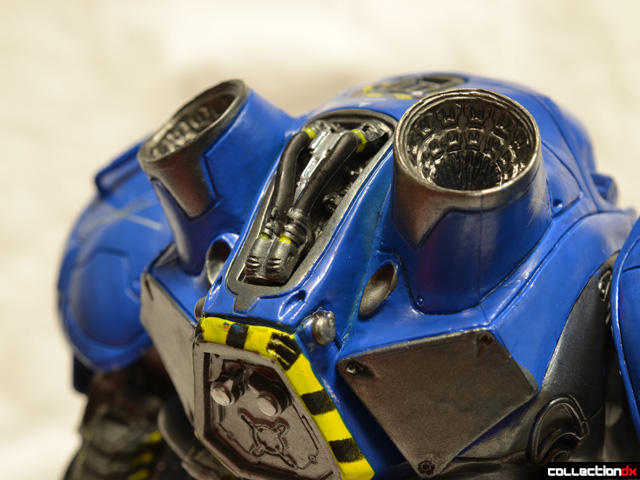 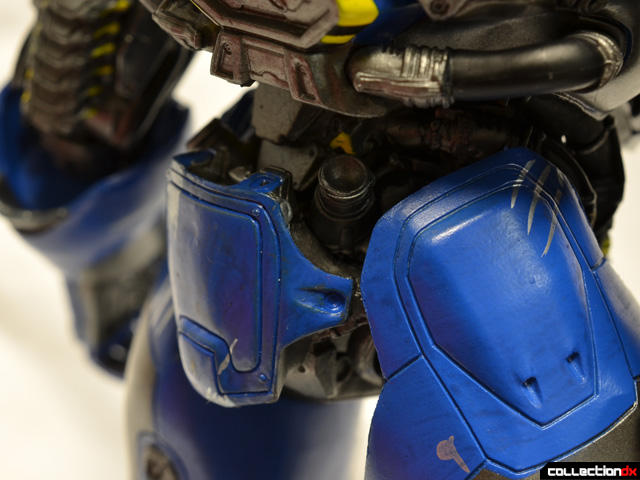 The backside is festooned with gorgeous mechanical detail.  Even through the entire figure is molded in PVC, all of the detail is sharp and well-rendered.  There's no squish or softness to the sculpt whatsoever.  I could get lost in those exhaust vents. 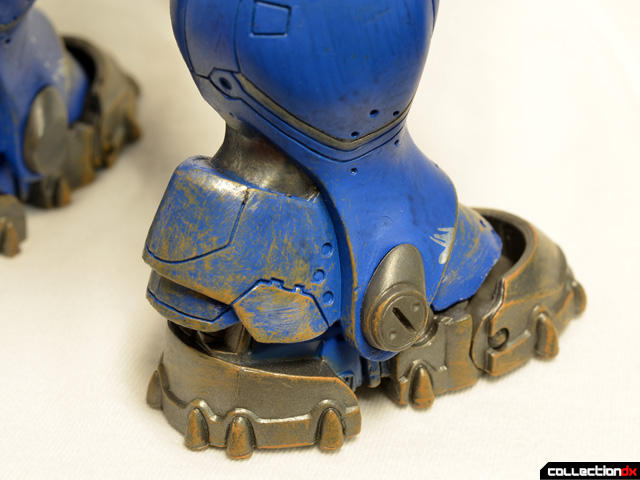 The weathering on the feet is simple but effective. 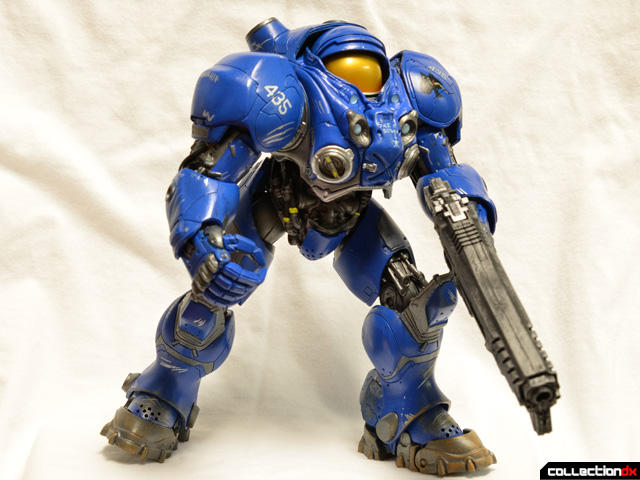 Tychus is no acrobat, but he can still be posed on the move and ready for action. 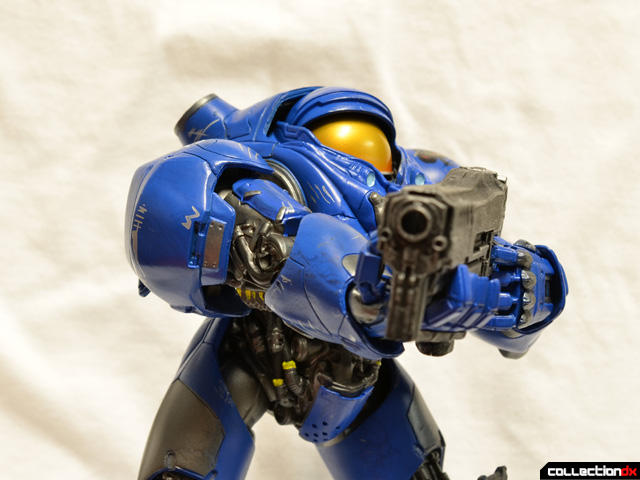 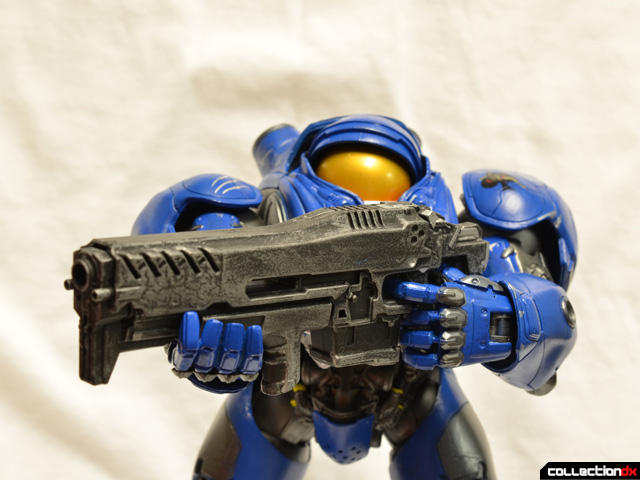 It's not pretty, but Tychus can get a two-hand aiming grip on his rifle. 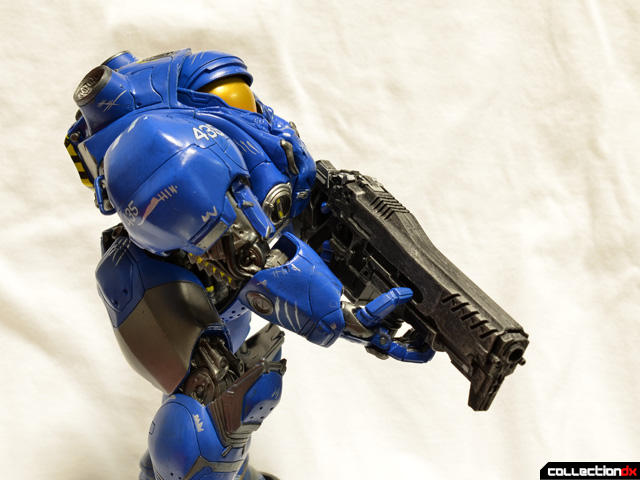 The bulbous look of the CMC suit is an iconic part of Starcraft's look, and this figure really pulls that off. 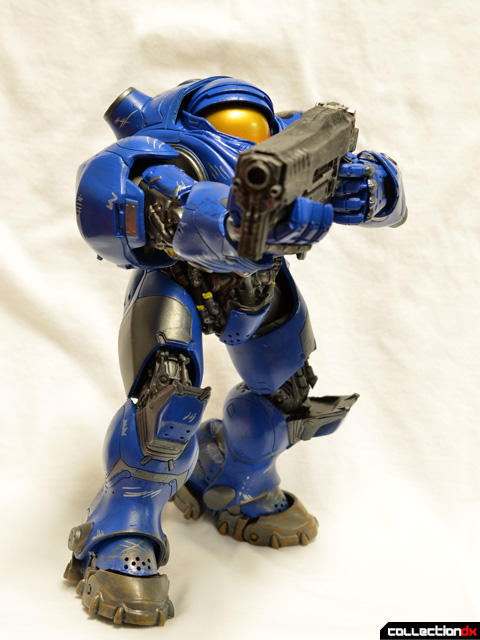 More than being nicely sculpted and painted, Tychus is just plain fun.  There are few things more satisfying than a big-ass battle armored gun dude. 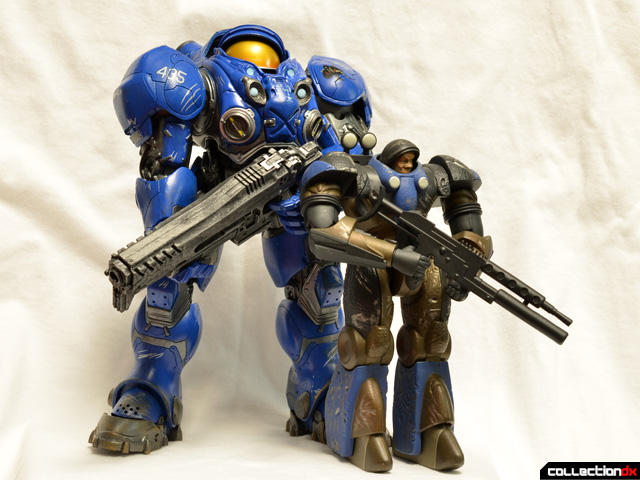 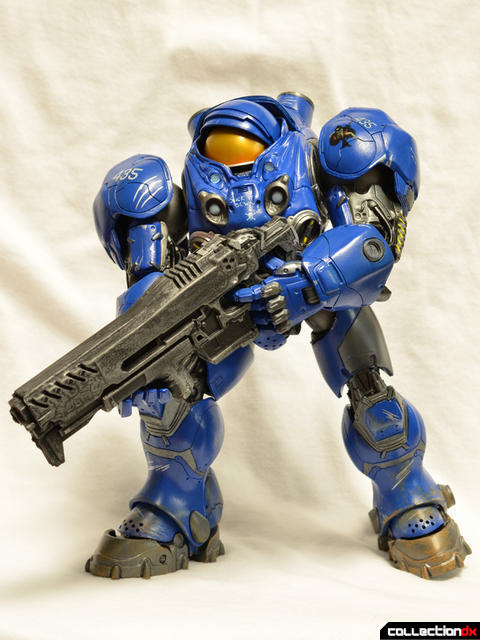 Tychus retails for $32, but seems to go for closer to $40 on most retail sites.  That might seem like a lot for a Western action figure, but Tychus is huge, nicely finished, and really well made.  Fans of Starcraft should need no convincing, and Tychus should be required purchasing for fans of power armor in general.