In a vinyl hobby full of pretentious, hyper-limited releases, he continues to put out great product that's affordable, accessible, and genuinely fun, regardless of your age. Beware: these are actual toys. You have been warned!!

Mark's Captain Maxx line has been rocking heads for a few years now, and his latest kaiju menace to society, Tripus, has finally come ashore!

And you know I had to pick up the glowie colorway! ;) 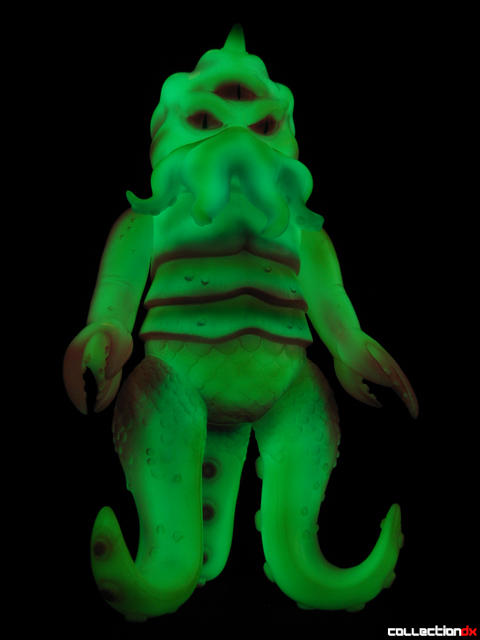 First of all, I have a long-standing love of sea creatures. I dunno--maybe it was the Kraken in Clash of the Titans, but whatever started the obsession, as long as I can remember, I've always had a soft spot for giant, mysterious creatures from the murky depths. Mark has recently released three colorways of this beast: red, glow, and green (the red and glow colorways aren't up on his site yet).

This vinyl does NOT disappoint, folks!

Let's start with the packaging. 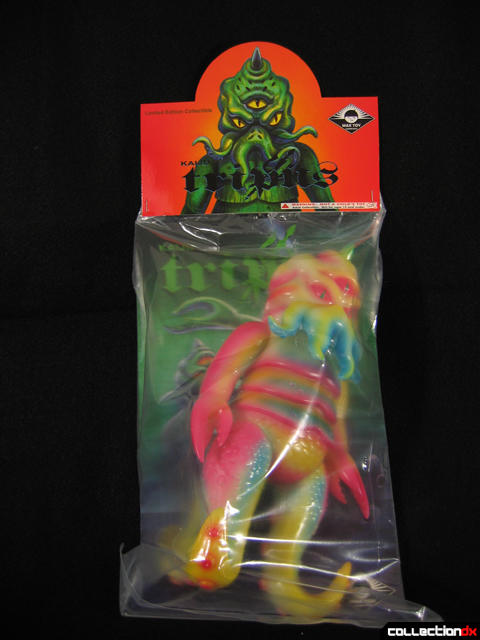 Like most standard scale vinyl kaiju, this 10" beast comes in a polybag with a stapled cardboard header. The header artwork is killer, and included with the figure in the bag is an actual backer card featuring more artwork of the creature in action by Mark! 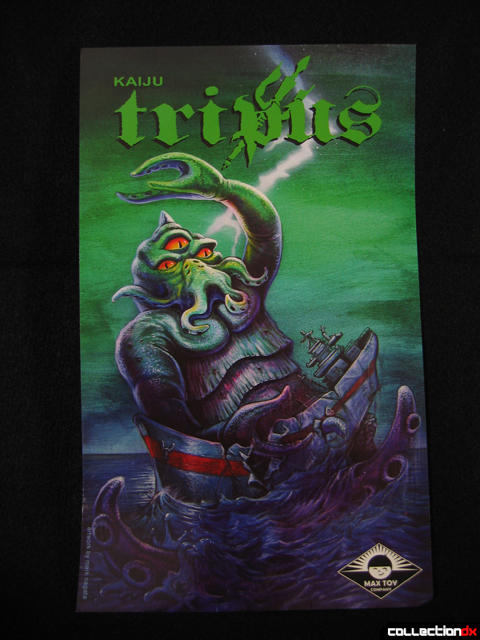 The back of the card depicts the whole Maxx lineup thus far. It's really fantastic that Mark put such creativity into the packaging. My only beef with the packaging is the bag, itself. It's a really thick polybag that's not 100% transparent. It has a sort of murkiness to it. Yeah, I guess that's kinda fitting for an underwater creature, but I wanna be able to see those vivid colors clearly! Also, this is a huge figure...and with the bag the size it is, the backing card got a little bent in the shuffle.

Still...it's not like you're gonna be keeping this guy in the bag for very long! 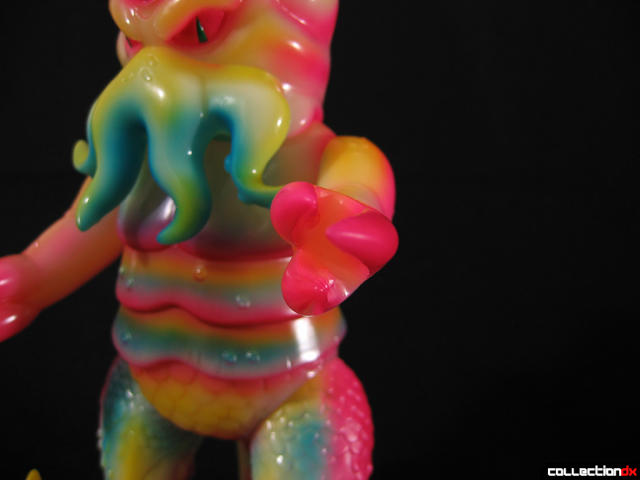 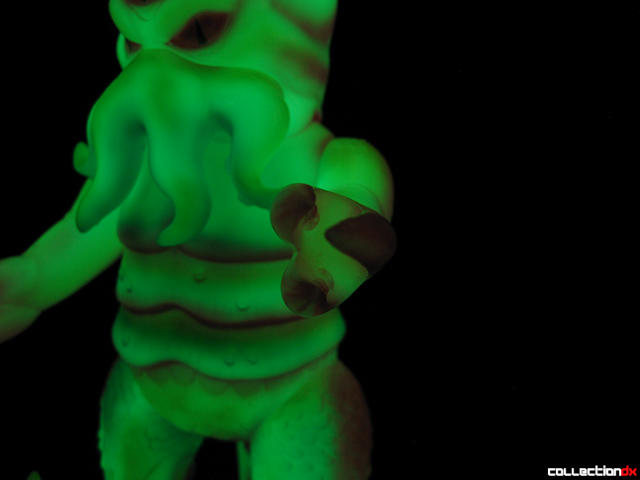 As we were just talking about on the Chaos Darkness thread, when it comes to vinyl kaiju, the pictures do most of the talking. 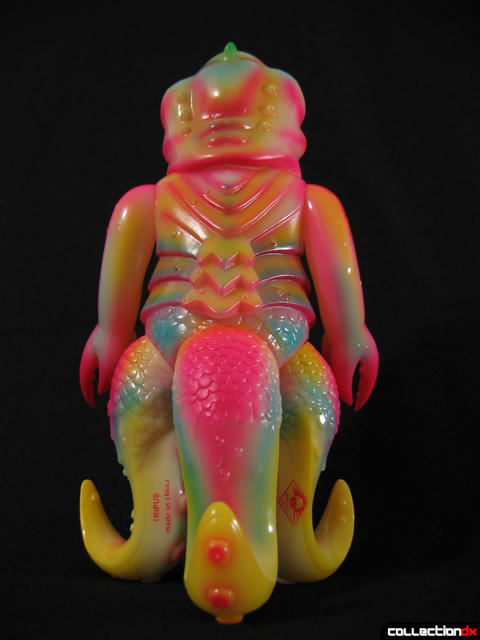 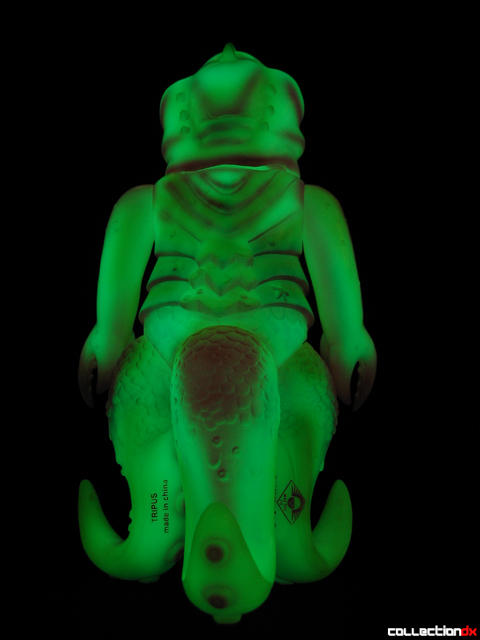 The colors are absolutely amazing on this piece. Mark really came up with a killer colorway here. There's actually very little exposed glow vinyl on this figure. It has yellow, pink/red, blue, and green sprays...all interwoven in a completely insane scheme that makes total sense at the same time! This guy's good! 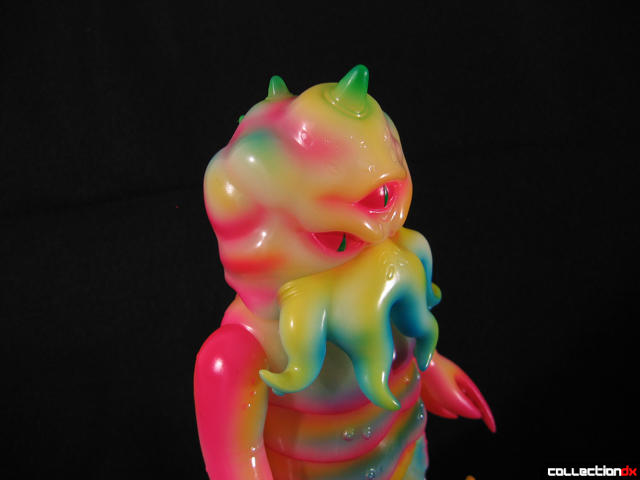 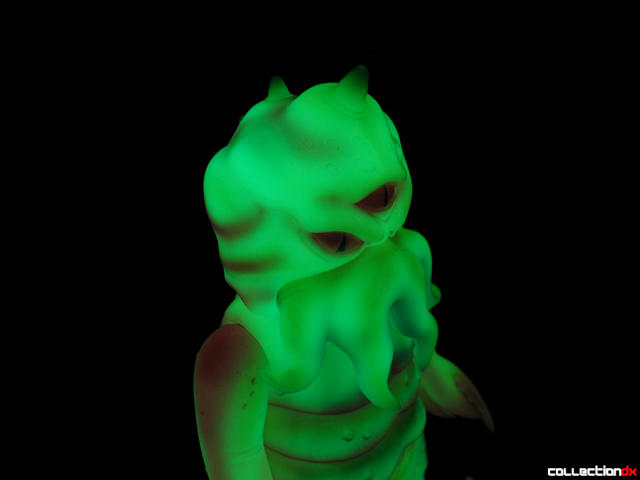 The articulation on the figure is about as much as can be expected for a vinyl. The figure is jointed at the shoulders, but swinging the arms up, they'll run into the mouth tentacles...so you'll have to swing them backwards if you want 'em pointed up. The neck is jointed, but ol' calamari-face can't turn his head because of those bulky tentacles. The three main tentacle legs swivel, too, of course. They're interesting because you can make him lean backwards or forwards by swinging the two front tentacles either way while the figure pivots on the back tentacle! Very weird and very original for a vinyl kaiju! 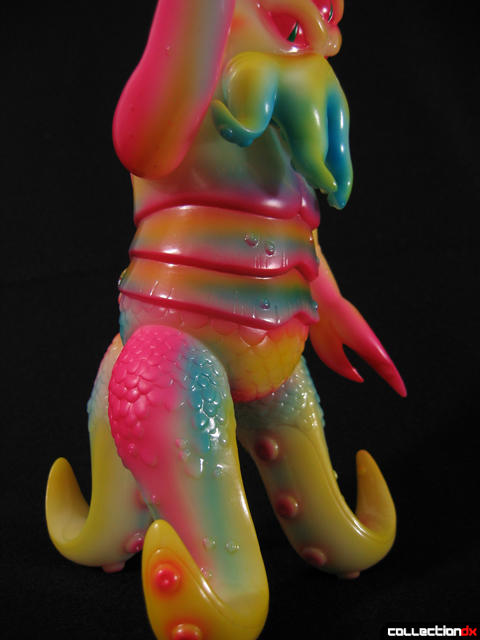 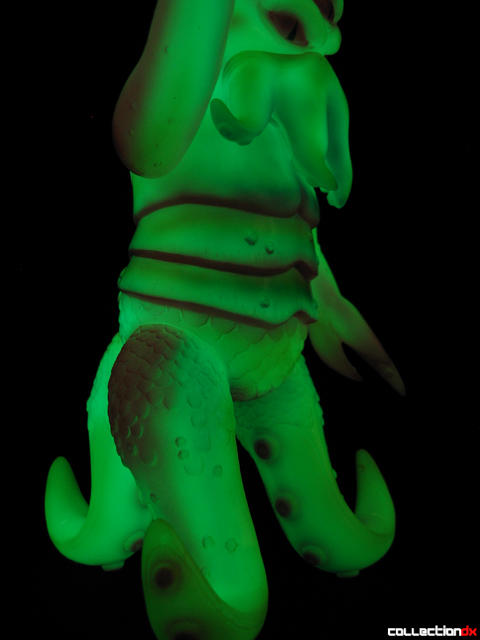 The glow power on this particular guy is just below average. Of course, there are close to 200 glowies on my shelves, so that's not much of a problem...but it IS noticeable. The main culprit is simply that the figure is almost entirely covered in paint. Most glowies have large areas completely unpainted to let the maximum glow light through. Not Tripus. This toy looks SO stunning under normal light because of all those great paint apps, just like Mark's Balbagon exclusive. 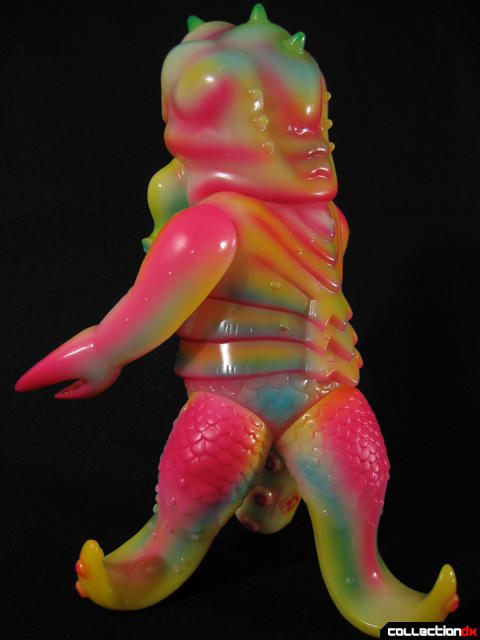 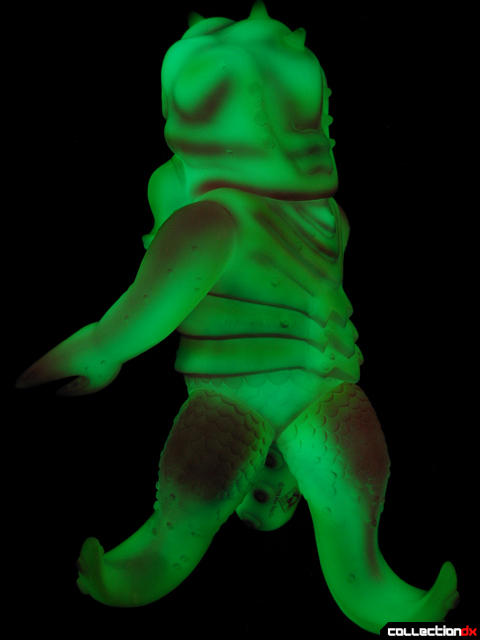 Another possible reason the glow power may not be as high as other glowies out there is because the vinyl is Chinese.

Oh well. You're getting a chunky 10" glow vinyl kaiju with *SUPERB* paint for only $70. I shudder to think what prices we vinyl collectors pay for a fraction of the toy! 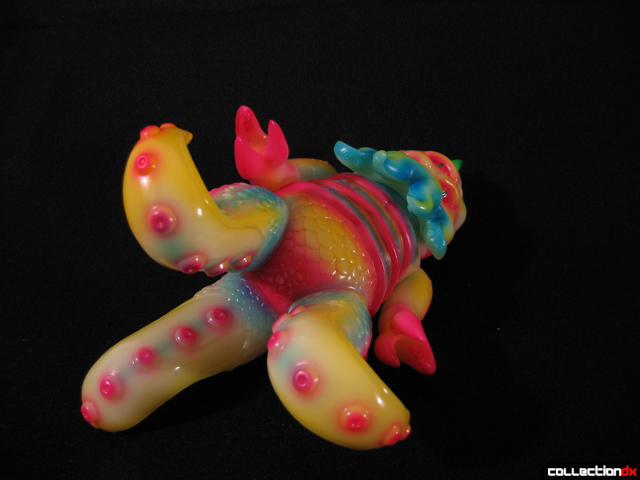 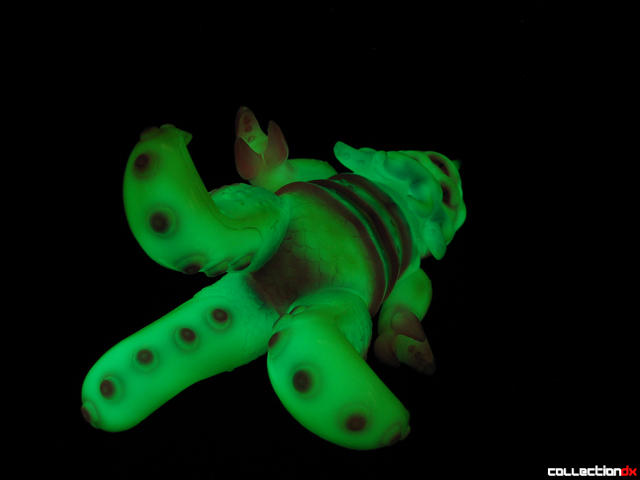 Our pal, Mason, summed up the whole feel of the toy quite well: "it makes you realize you have a toy in your hands and not some art project with a lot of pomp attached...Mark is definitely an "artist", but he set out to make TOYS and it shows". 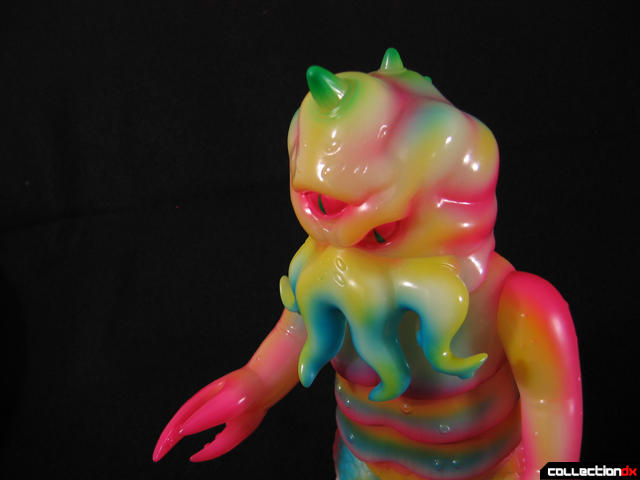 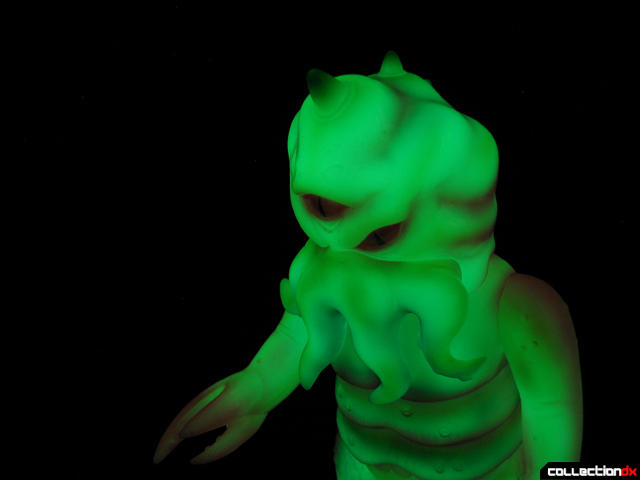 I don't have a big collection at all... I kind of just got back into collecting, but I love all of the crazy stuff out there. I can't afford a majority of the stuff, but that doesn't stop me from loving it! I collect mainly the Bandai pieces because they're cheap, and they look like the characters in the movies. I had a few Godzilla and Ultraman toys when I was a kid, and none of them were as accurate as the stuff put out by Bandai today, but that didn't matter when I was a kid. I think the memory of those goofy toys are what drive a lot of us to dig the more abstract forms that are represented by more stylized kaiju toys.

This was a great thread with a lot of good points on both sides of the argument. You guys are pretty awesome folks. It's nice to see a debate that doesn't get nasty when people are challenged.