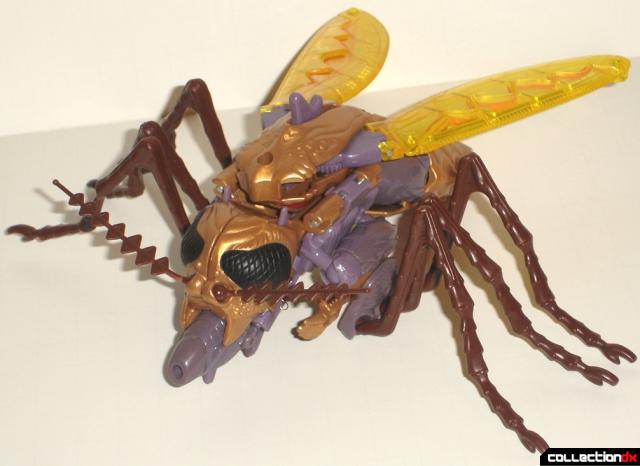 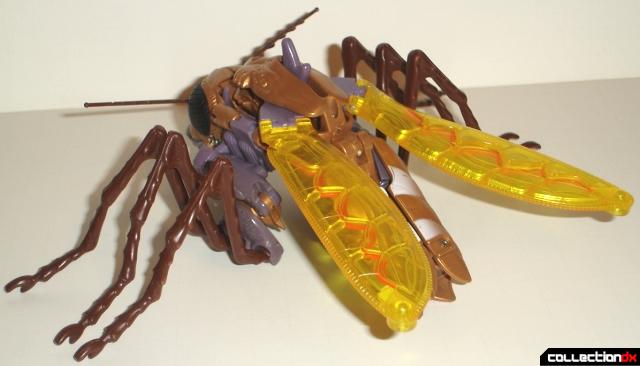 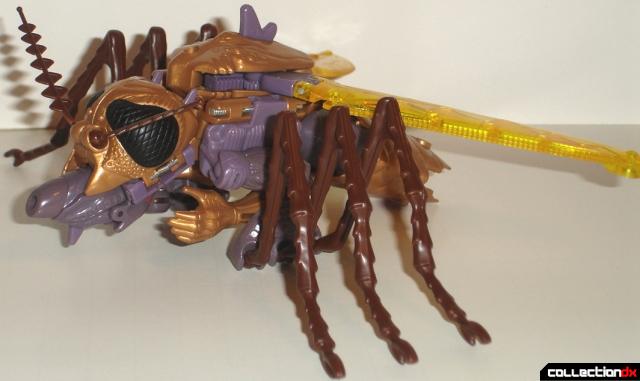 Transquito is an evil Predacon from the Beast Wars line. He's one of the very many characters who never appeared on the show. However, he was repainted and released in the Beast Wars II line as "Bigmos" in which he made an appearance on that show. If you can tell by his name, Transquito transforms into a rather large and fearsome looking mosquito. The sole accessory that he originally came with was a missile that launched from his mouth and doubled as his proboscis in beast mode. I received mines loose but it doesn't detract from the figure one bit. 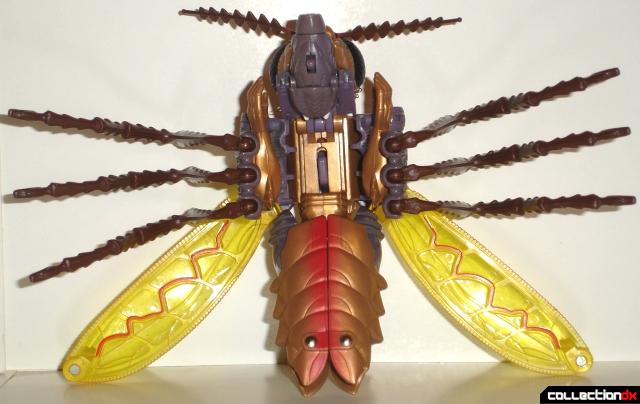 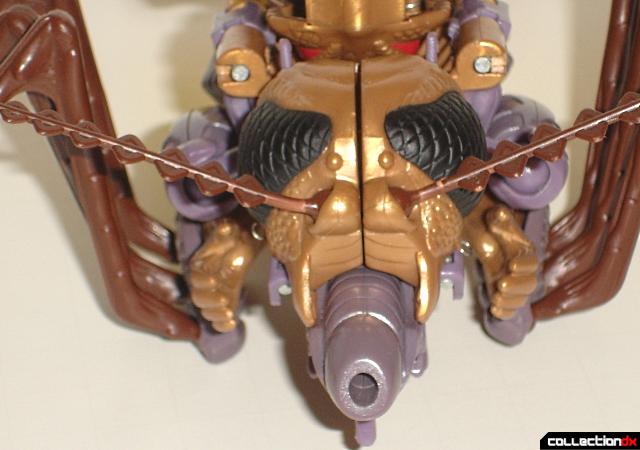 Before continuing this review any further I would like that state that after I had this figure about a month, one night I suddenly woke up from my sleep in shock and horror as I realized that he's almost made entirely out of GOLD PLASTIC! (oh no!!!) If you don't know by now, toys and accessories made from gold plastic tend to be VERY BRITTLE and can accidentally break or even disintegrate with very little effort. This is known as "Gold Plastic Syndrome" or "GPS" for short. I transformed him a few times before and after the shocking realization I've had no problems YET. I also received this figure second hand tightly packed inside of a ziplock bag. So far it hasn't disintegrated on me as of yet but I always keep a watchful eye over him. In the entire Beast Wars line (both Japanese and American) I only know of three figures to have ever suffered from GPS: BW Neo Randy (the worst case I've seen), BW Torca, and BW Transmetal Megatron, but for some reason the waist only. Mines is still in good shape. As much as I used to play with it I must have accidentally gotten a Japanese one in American packaging. 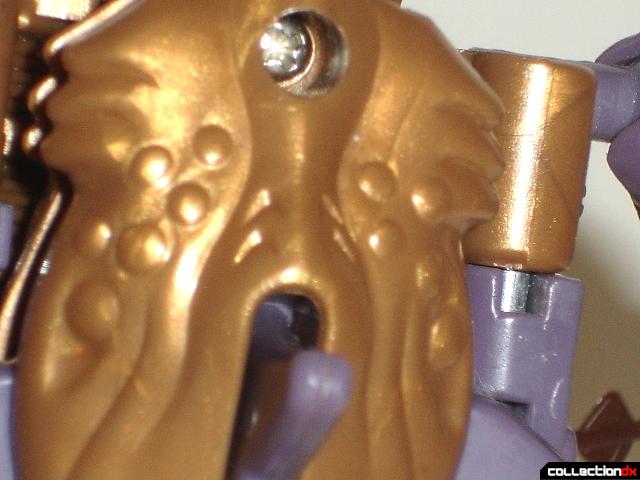 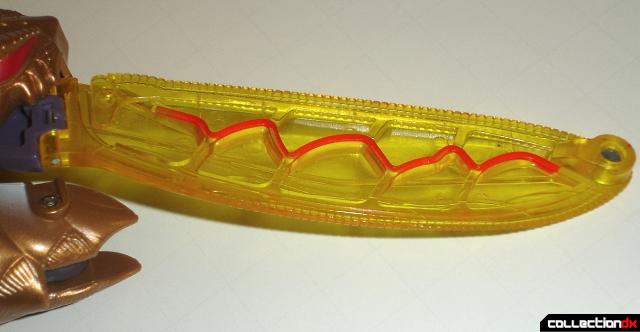 In beast mode Transquito has a function where his wings move up and down. This can be done by moving the switch on his back forward and backward. His wings are sculpted in translucent yellow plastic with fine details and there's a big red vein going down the center of it. Blood perhaps? 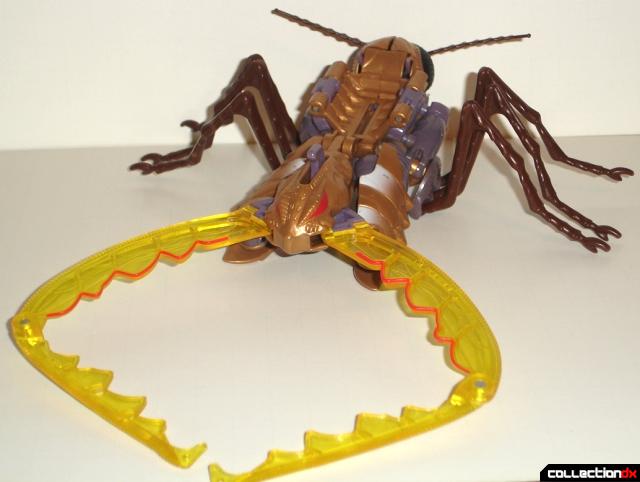 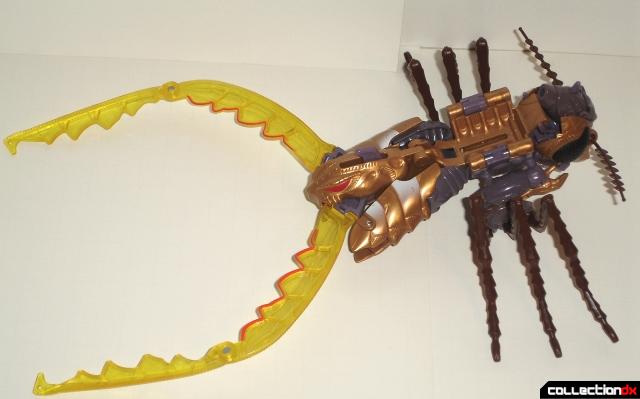 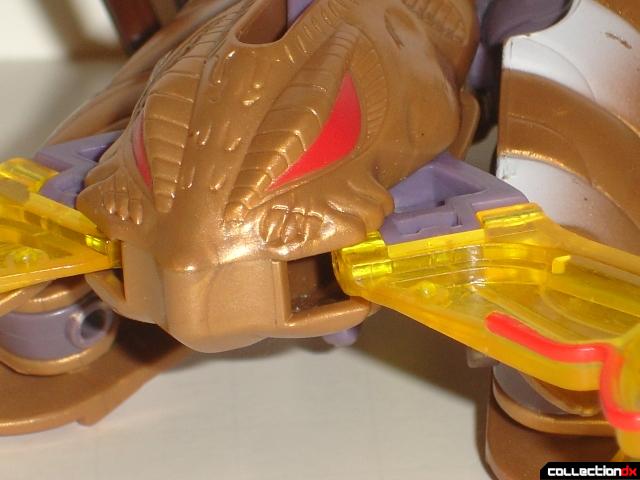 At the time all of the Mega-sized Beast Warriors contained either an action feature such as hidden missile launchers or a unique third mode. Transquito is the only character to have both. To transform him all you need to do is split thorax and move the pieces down a little, grab the tab on his back and flip the entire section around. Move the wings towards the rear of the body (which should now be the front) and open them both up to where they look like mandibles. Split the mosquito head open to make the robot bead flip up. Rotate the robot head around and you're done! To me Transquito's tertiary mode looks like a demonic scorpion/ear wig/ant lion hybrid. To some it may look weird, others may not like it at all. Even though it's "different" I like it and think it works just well. Since the Beast Warriors are basically mutants anyway (with the whole "mutant mask" thing going on with the first series) I see this form as a transition from beast to robot. Like some kind of science experiment gone wrong. Transquito's robot mode, like several of the other Beast Warriors, doesn't even look remotely human besides the bipedal stance so this mode makes perfect sense. The action feature is retained in this form as well, except instead of hearing the loud buzz of wings flapping, you hear the sound of two gigantic mandibles crunching away on your bones. 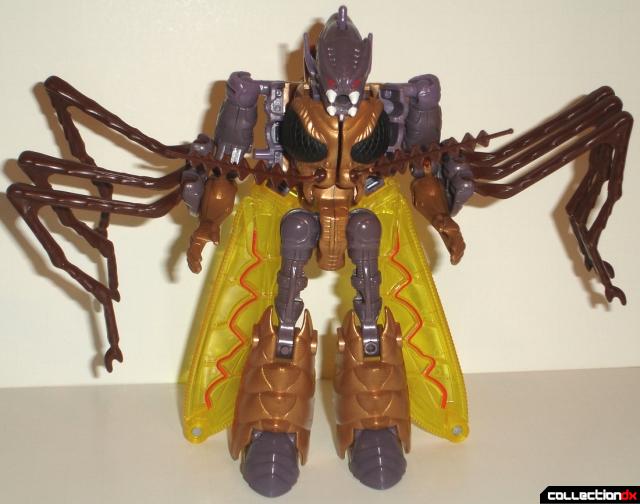 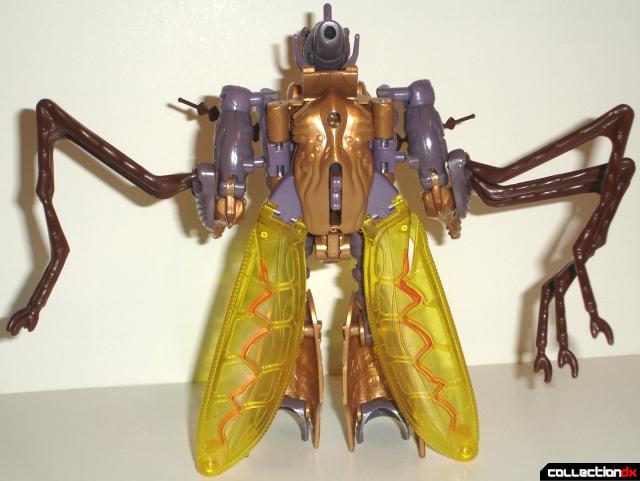 Transformation to robot mode is very simple despite the size of this figure. While still in his tertiary mode, rotate the robot head back around, fold the mandibles back into wings and flip the mid section back up. Rotate the legs and straighten them out. Unfold the arms from underneath the body and flip the beast head down. Make sure you be careful not to bend the antenna. Mines have stress marks on them. You may need to adjust the robot head a bit. If not, then you're all set. 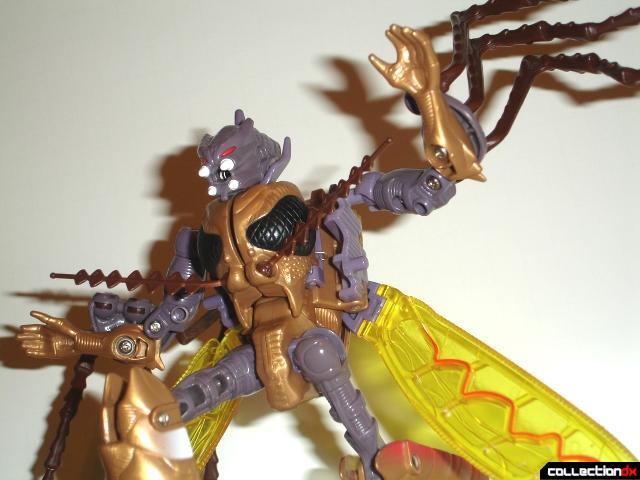 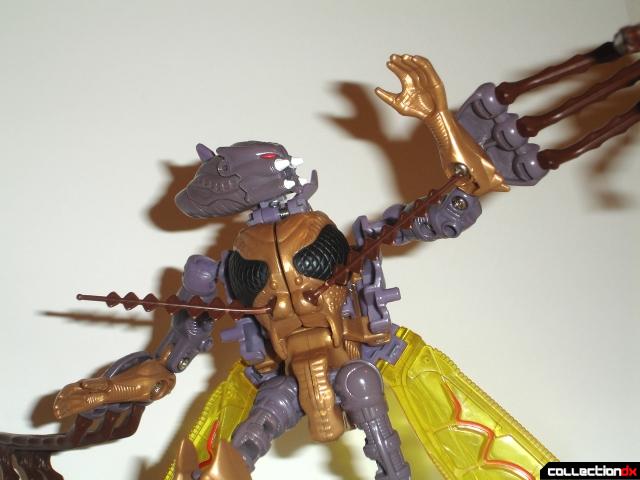 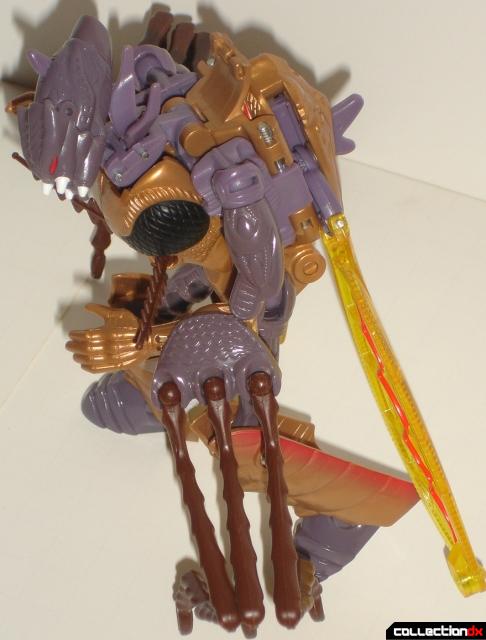 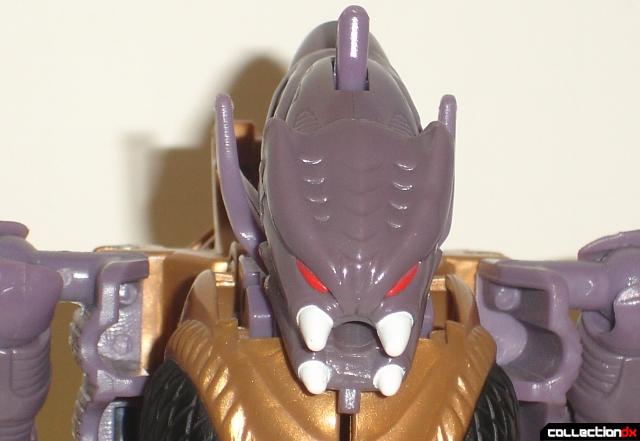 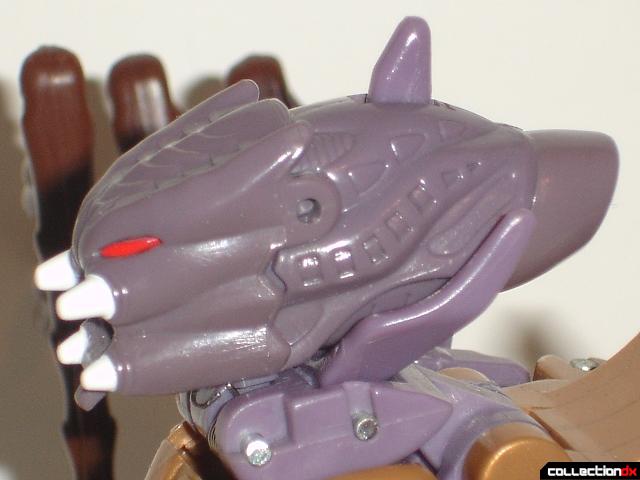 His robot head really looks like a cross between alien and predator. Just imagine this guy cornering you in a dark alley with a long, razor sharp needle coming from his mouth dripping with deadly acid. Definitely one of the more unique head sculpts in the series. No mutant mask needed. 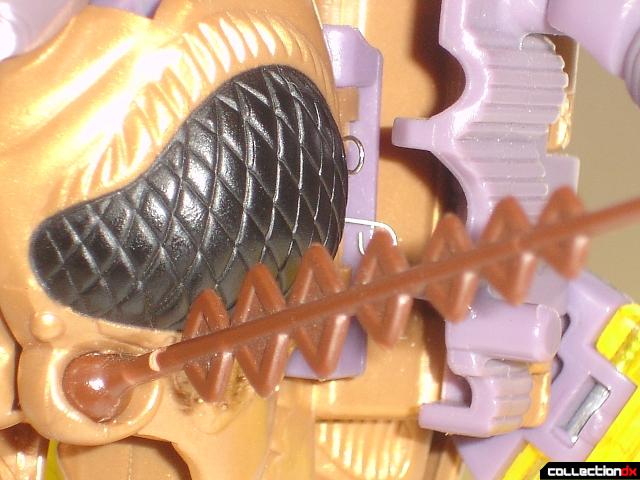 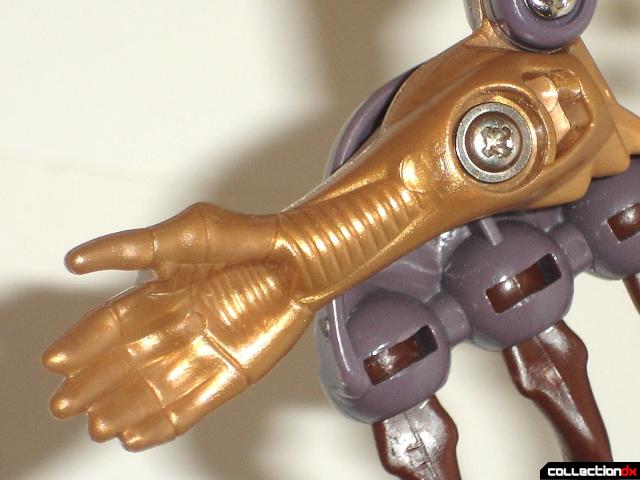 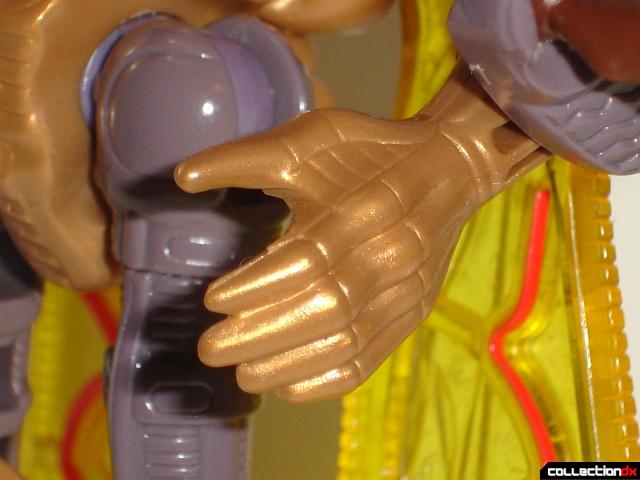 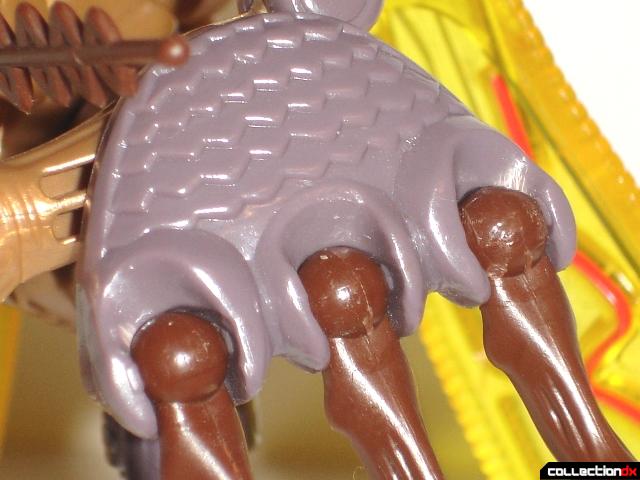 As with all Beast Wars figures, Transquito has lots of beautifully molded detail. If you'll notice, his hands are in the open position. I don't have a problem with this because it always looks like he's about to pounce on some unfortunate victim and drain their life fluids. That may also explain why he doesn't need any extra weapons. Personally I think he looks good enough on his own without any. 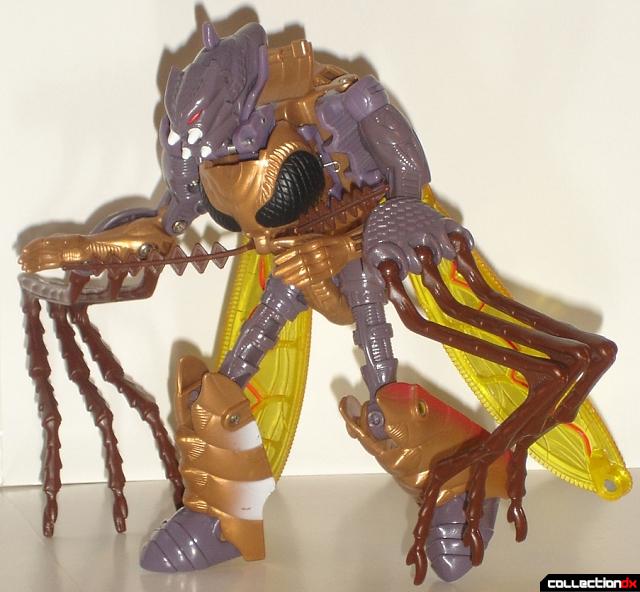 Here he is posing for his boxart. The proboscis/missile was drawn in later of course. All in all, Transquito is a good sized figure, decent price even on the secondary market, excellent detail, no accessories to lose other than one missile, and fearsome looking. If you love Beast Wars and you're not too put off by his third mode, pick this guy up or his repaint if you can find a good price. Just make sure you don't pay TOO much for him. Also, be aware that both he and his repaint both have the same amount of gold plastic in the same exact places. Again, I'm not trying to scare anybody, but I'm just putting this out there.

One last thing. At the end of his of his original Tech Spec it states that "Transquito is hated by ALL who know him." I wouldn't be too sure about that. Apparently, sometime during the Beast Wars Transquito met another one of his kind and judging by her looks she's an "older" female type by the name of "Ms. Quito." So time went by and after the Beast Wars was finally over with..... 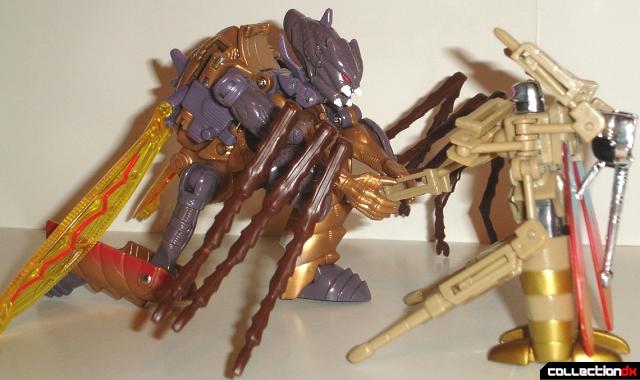 Transquito expressed his true feelings and decided to make it official. 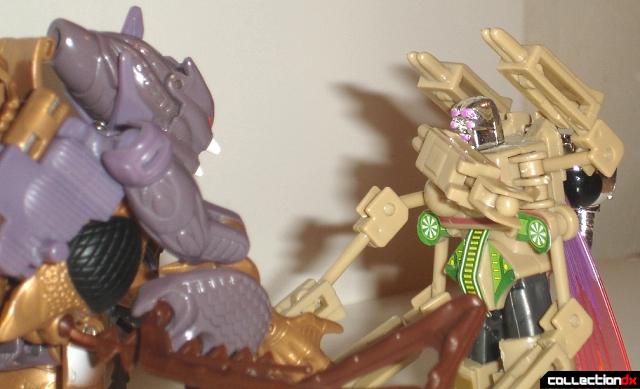 You can see the excitement and surprise in Ms. Quito's face. I heard rumors that they now have hordes of cybernetic mutant vampire children that scour the galaxy in search or fresh blood...or oil...or whatever those things are supposed to live on...

8 comments posted
I have a sort of nostalgia

I have a sort of nostalgia for Beast Wars. I'm a bit dismayed much of my collection was damaged from Hurricane Sandy but ah well.

BW reminds me of a time when it was conceivable to collect ever (near every) Transformer that was coming out.

Hey, I'm sorry to hear that, man. As far as I know, the worst storm that we had where I live was Hurricane Hugo. I wasn't even a year old yet back then but every so often I hear people talk about it.

Was there a sub-line that you liked in particular? (Original, Fuzors, Transmetals, Mutants, etc) Or did you like a few individual characters from different sub-lines?

Definitely the Transmetal line. While I did like regular Beast Wars (especially the insects like Waspinator), the TM was both a fresh air of creativity and a bit of nostalgia due to the use of chrome which reminded me of robot toys of the 80's. My favorite was TM Waspinator. I still have both versions of the mold.

You should check out the new Waspinator mold. It's super show accurate, the Takara version has better color and paint apps. But if you love the character it's the best representation and one the better new official figures.

He looks pretty good, but the one I'm really after is Rhinox. 9.5 times out of 10 I'll probably be getting the Hasbro version though. Lol.

For me I'd say the regulars and the Transmetal II's. I loved the asymmetrical designs and to me they seemed like mutant hybrids of beast and machine rather than beasts turning into machines. Characters like Scourge, Jawbreaker, and TM II Cheetor could easily pass for cyborgs.

I always liked the early Beast Wars, prior to transmetals, when they had organic looking forms. :D

I have a soft spot for the originals as well. I guess that's why I'm trying to track down some more. Lol.