Four Star was one of the more ambitious Transformer bootleggers of the eighties, re-tooling its copies of Insecticons and Constructicons until the original molds were all but unrecognizable. Four Star created a handful of its own unique figures, among them the venerable triple-changer Tri-Fly.

Tri-Fly, under the “Transistor Robots” banner, is packaged in a G1-derived window box, complete with illustrations of its alternate modes. 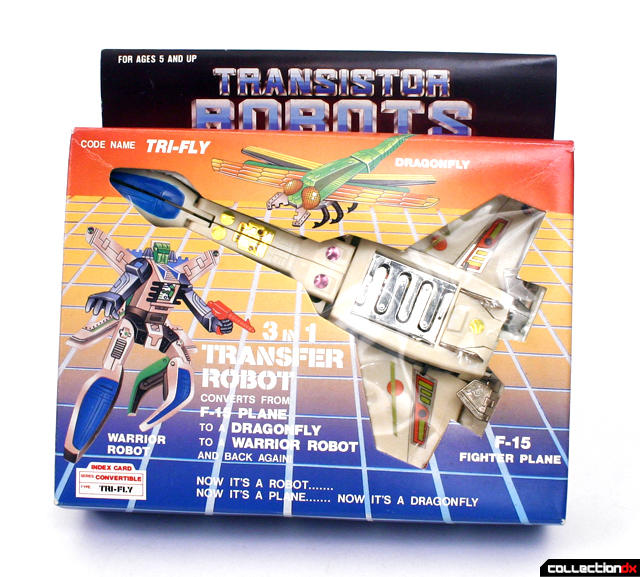 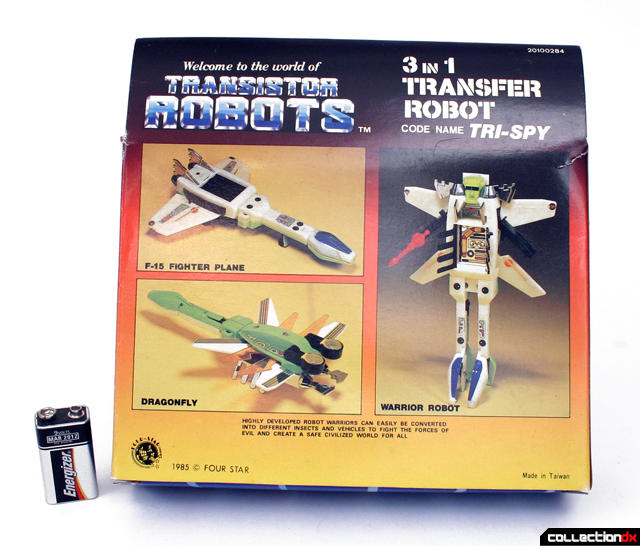 A styrofoam tray within. There's an instruction sheet and a few decals. 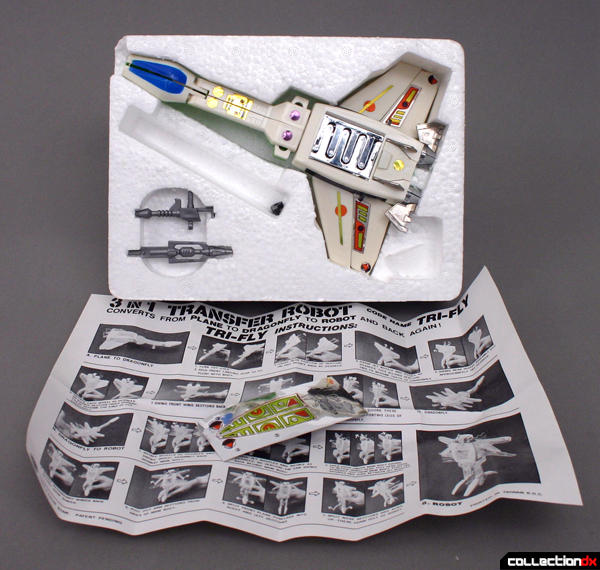 Tri-Fly is packaged in its jet mode, which is an F-15 according to the box. Looks more like the Concorde to me.

While the sophisticated packaging shows promise, the toy’s construction is lightweight and cheap. Much of the chrome is tarnished out of the box, seams don’t line up well, pieces fall off. This isn’t a bootleg, but it’s certainly bootleg quality. 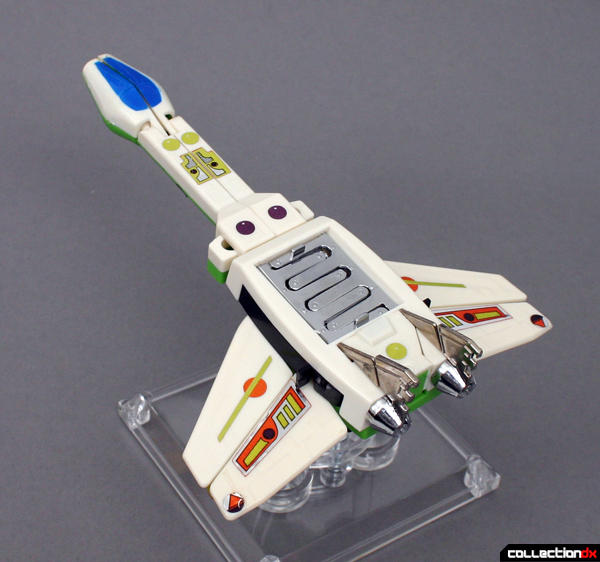 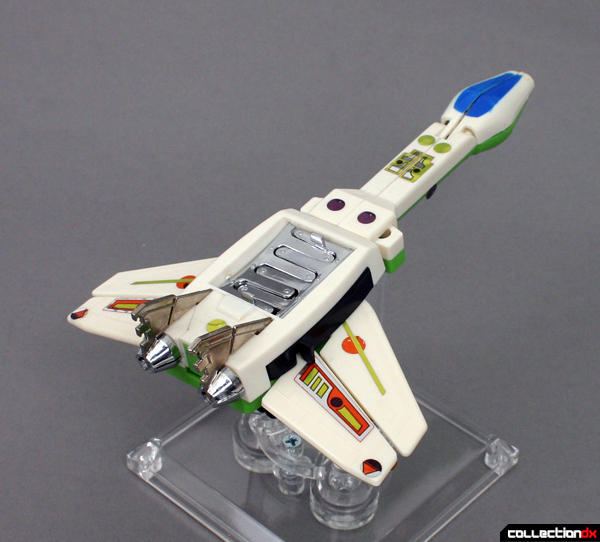 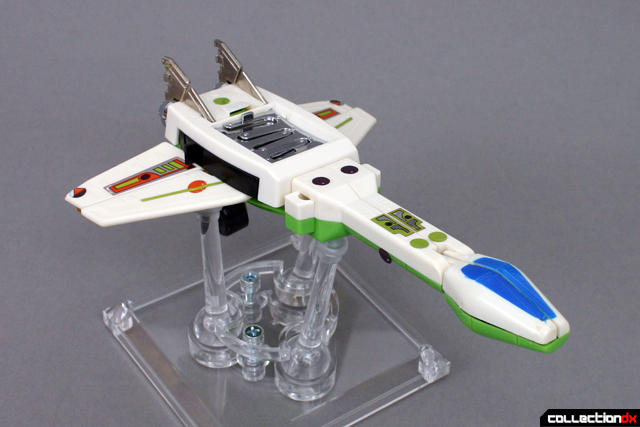 That said, there are nice touches.I like the metallic decals and the chrome detailing at the rear hatch.. 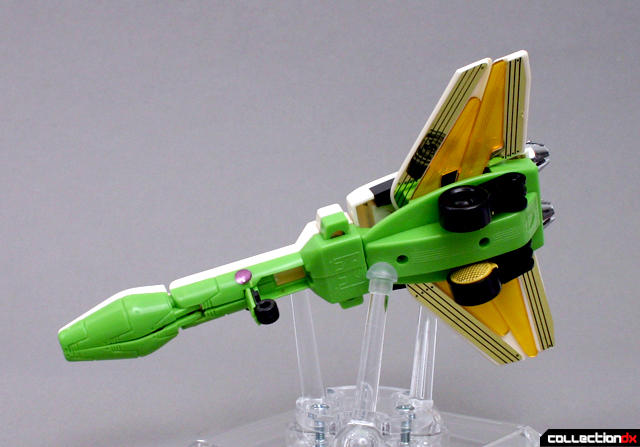 Transformation to dragonfly mode largely consists of turning the jet over. You then feather out the wing pieces and fold up the eyes and teeth (yes, these are dragonfly ‘teeth’ according to the directions).The hatch area cleverly unfolds to become feet. I love the colorful goofiness of this mode, as well as the strange contrast between it and the high tech jet.. 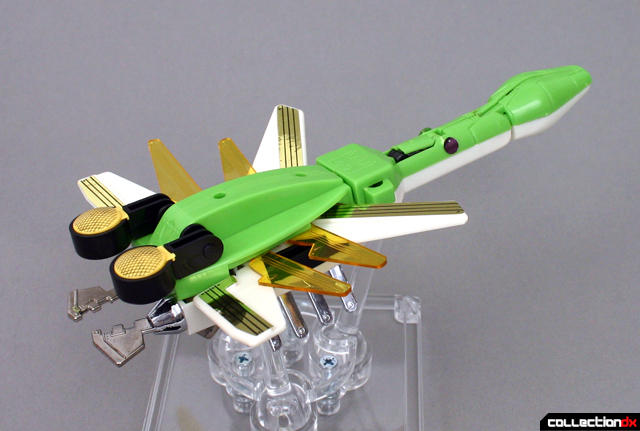 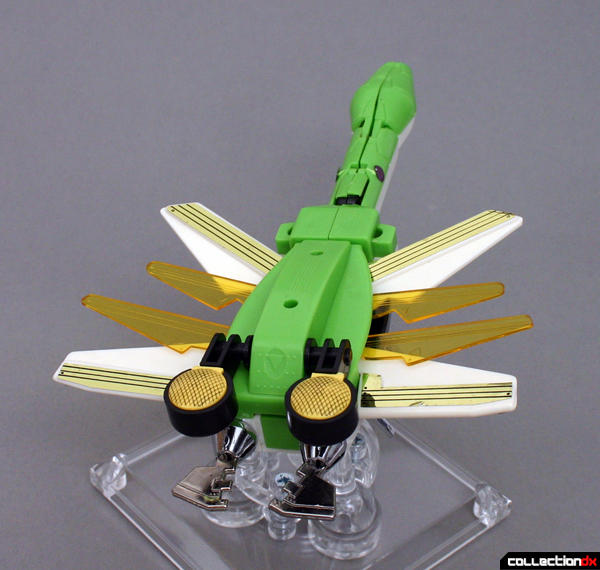 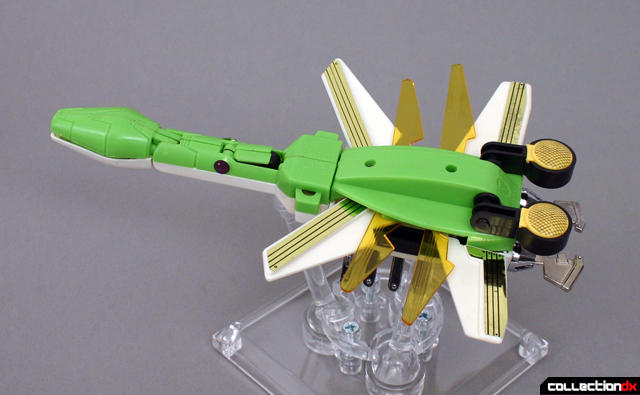 To transform into the robot mode the dragonfly tail/jet nose separates to become legs. The cockpit unfolds to become feet, but (oh god) the feet don’t work very well and the bot doesn’t stand (note the Flightpose buttress for the remainder of the review). Silly widdle arms fold out of the fuselage, the head folds out of the rear of the plane. 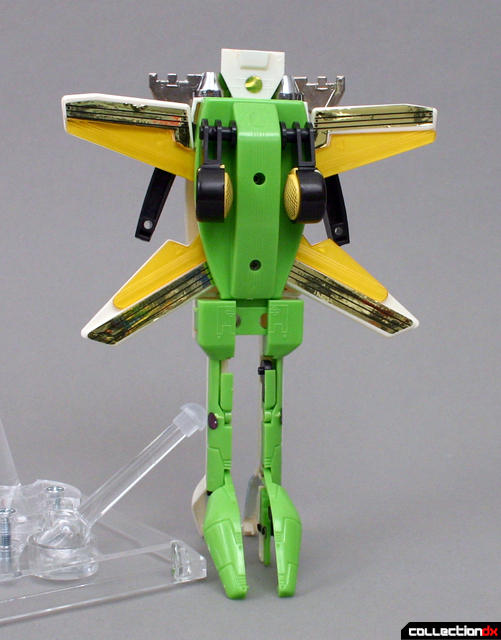 For some reason, the dragonfly feet/bay doors, now the bots’ chest panels, are supposed to remain opened, which lends the figure a certain charm. I like the detailed decal behind them. The chest also looks fine closed. So, yeah. A strange duck. But exactly the kind of toy I love. Though Four Star’s bread and butter was copying existing molds, the Try-Fly looks and feels like nothing else. The styling and the transformation are absolutely unique. This isn’t a warmed over Go-bot or Transformer, This is unmistakably a Transistor Robot. The Tri-Fly is practically engineered for my tastes. It’s an ultra-obscure mid-eighties original transformer. It’s goofy as hell, bordering on ugliness. If only it contained diecast metal or magnets. It took me a good long time to get hold of one of these, and I’m damned glad I did.

9 comments posted
If you flip over the

If you flip over the dragonfly, you get the plane in "attack" formation!

Man, that "plane" mode looks like a guitar! This thing is all around awesome. I wish they still made junk like this. I look to the dollar stores, but it seems like you guys always find the best stuff and I can't seem to find squat; just the usual dollar store stuff. Where's all th wacky stuff for me?

Do you have the Four Star four-changer which turns into a spider, a helicopter and... I think another spider?

CRAZY, this stuff makes me wanna pull my hair out if I had any. Are you sure these things existed or are you using black magic to create these things? Thanks for reviewing such crazy stuff

They took G1 Soundwave's recognizable missile and made a sword out of it.

I check this site every day, hoping to see things like this. MIND BLOWN.

I do it for you, Jacksauce, and the rest of you who share a similarly obtuse sensibility.

Atom Smasher, you refer to Tri-Fly's mutant brother, Spy-Fly. He transforms from helicopter to spider to robot. Though I still covet him, he is the weaker sibling.

Alexx, it's less about random luck at a dollar store and more about research and patience and opportunity. It took maybe five years of vigilance (and more scratch than you'd think) to finally procure such a ridiculous thing. Keep your eyes peeled!

Thank you for your vigilance, because this guy's face has made my day. RIDICULOUS! This one has got a lot of funksoul to it!