The entire toy is made of hard ABS plastic, with exceptions being the PVC jaw, and two yellow rotating plates on his back. The LCD screen is protected by an additional plastic window over it.

Tonn rolls on four wheels beneath his feet, and has a free-rotating jaw. No other parts of him move, but the tail and back plates do have a little give to them even though they snap into position. 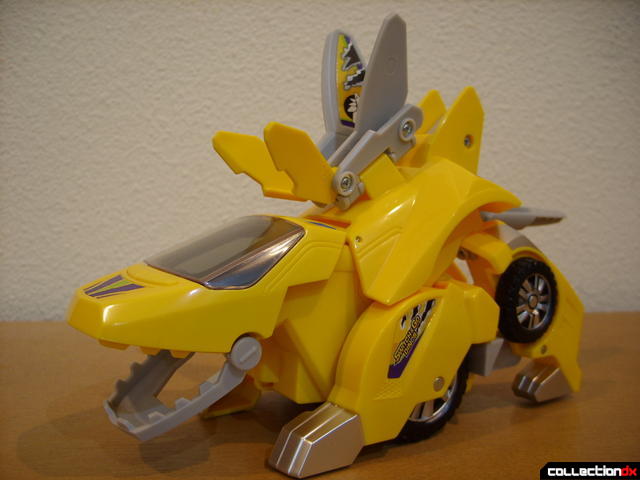 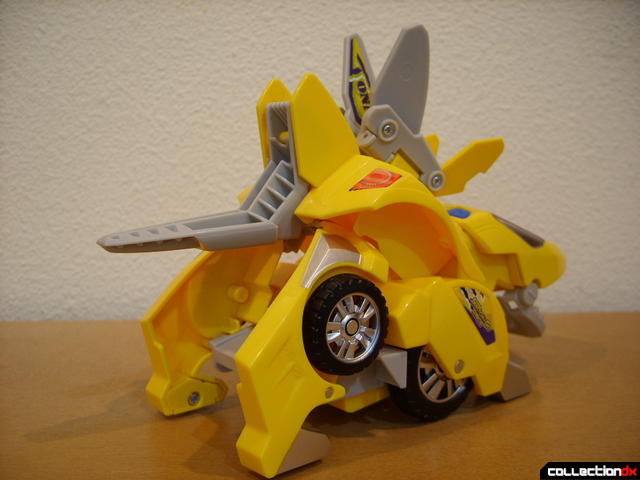 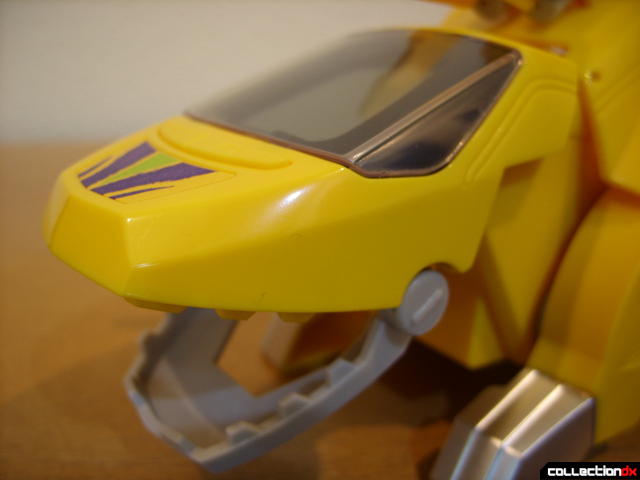 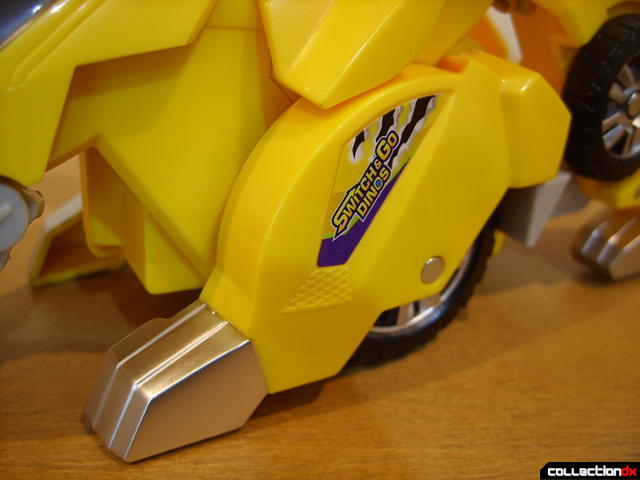 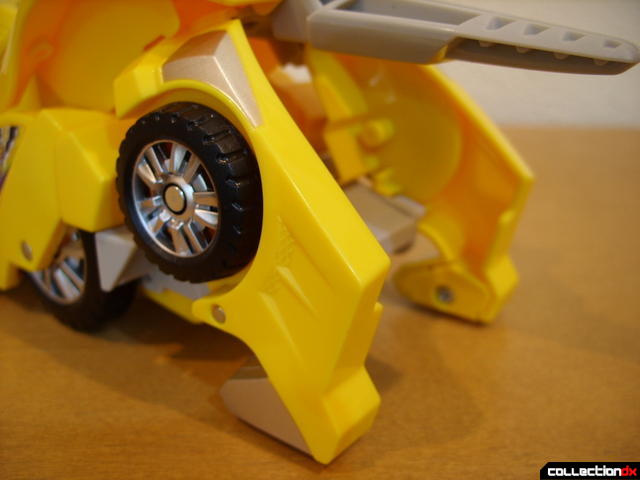 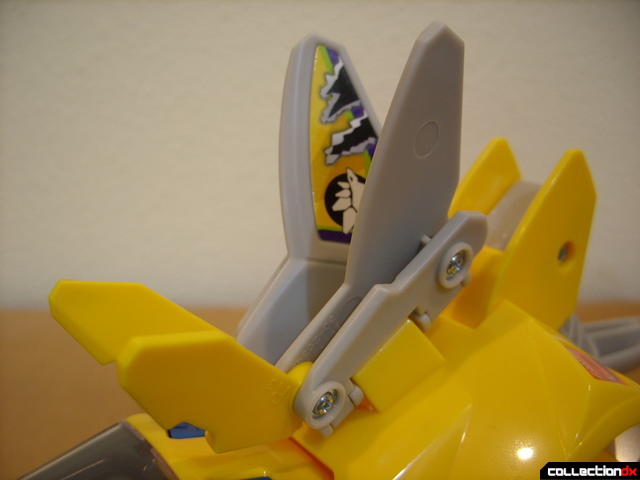 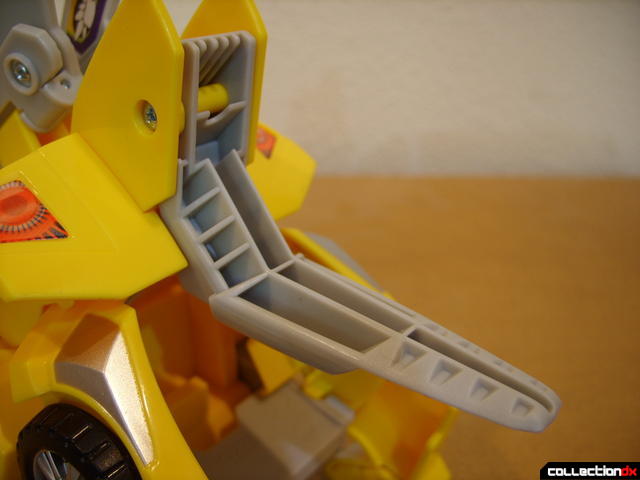 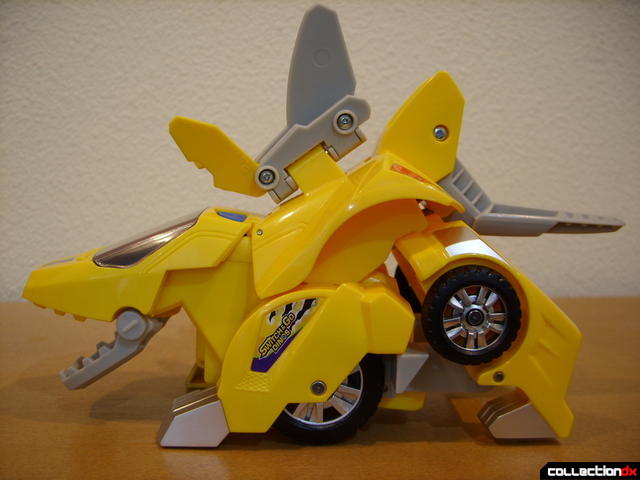 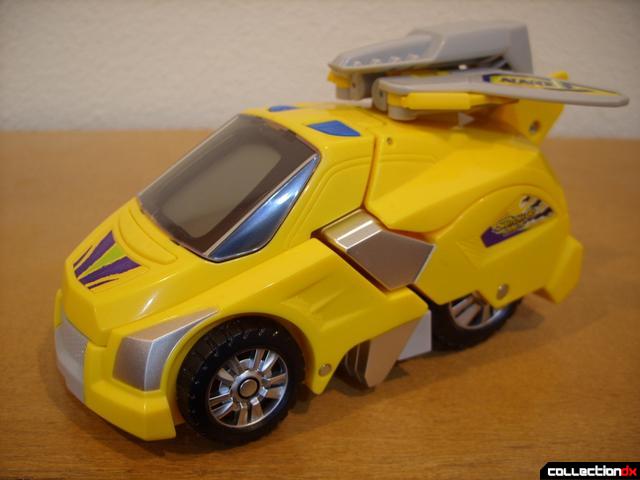 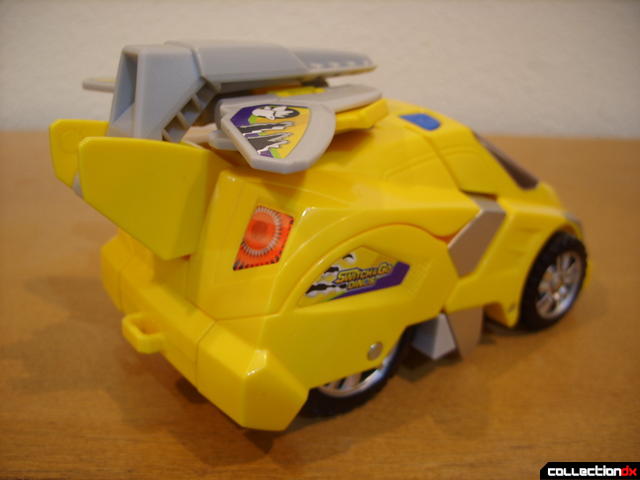 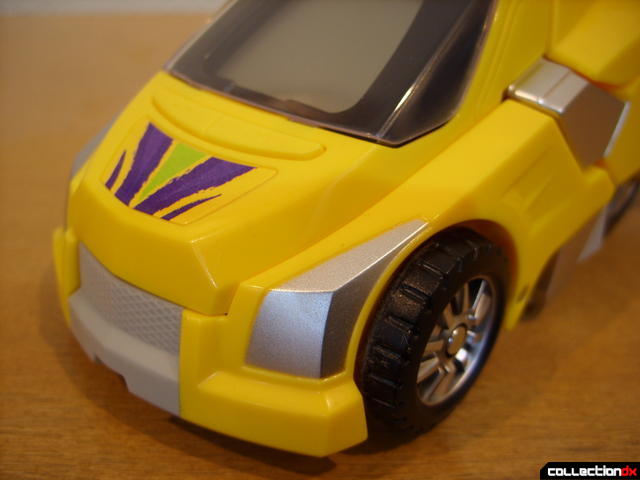 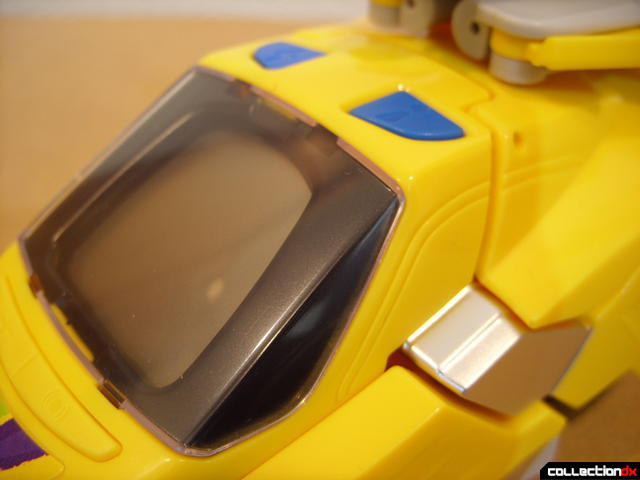 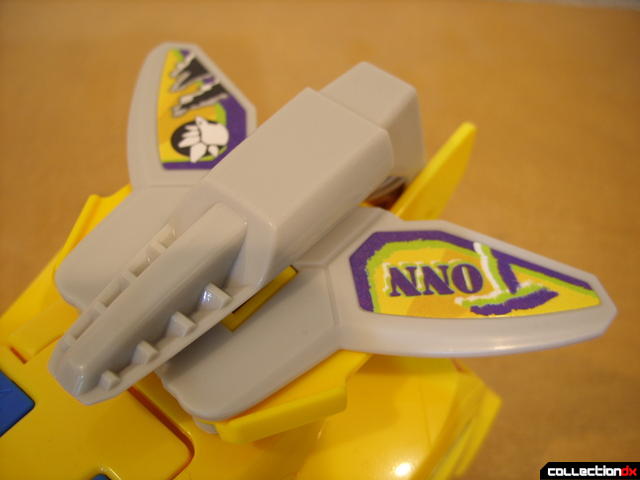 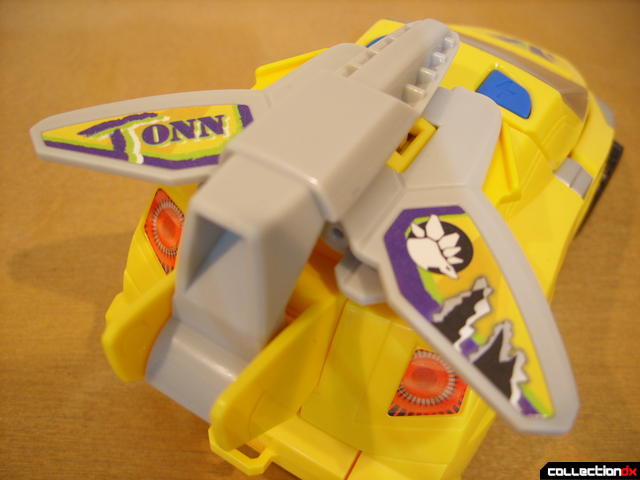 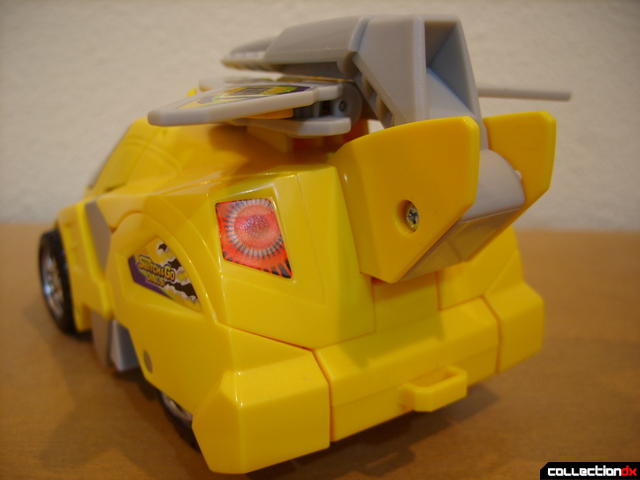 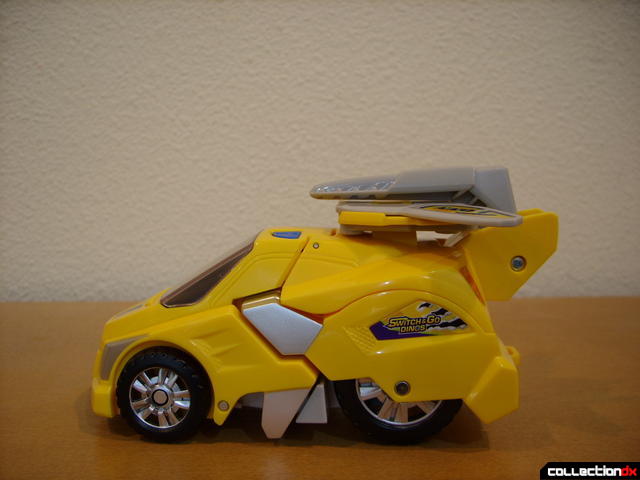 While pressing any of the four buttons will turn it on, if you hold down either the Sound or talk buttons for a few seconds, the battery will turn off. Additionally, if left alone for a minute, the toy will turn itself off automatically to preserve the battery.
If neglected, however, it will make some prompting noises (“Let’s get wild!”, animal sniffing, “Turn my wheels!”, engine revving, etc) to remind you that it is still powered on.

Tonn is a ‘smart toy’, in that he knows which Mode he is in, and will react accordingly. When you convert him, the screen will flash and the eyes will swap for the driver (or vice versa).
Additionally, when you roll Tonn in Dino Mode, his eyes will bounce up-and-down and you will hear heavy footsteps. When in Vehicle Mode you will see objects fly past the driver and the engine will roar at high speed.

Does anyone here remember A.I.B.O., the Japanese robotic pet dog that came out in 1996? It was revolutionary in how interactive it was (aibo 相棒 means “partner” or “pal” in Japanese) and how it moved about on its own because of its artificial intelligence. Of course, it carried a selling price appropriate to its size and features (well over $150 per unit) and was unquestionably NOT a toy for children.
Then there was that whole Furby craze that wouldn't ever f---ing go away. They were Ewoks-in-the-making and annoying as hell, sandwiched comfortably between keychain mini-game Tamagotchi and the then-fledgling Pokémon franchise. We were saturated with five inch versions and simpler three inch versions, and non-electronic Happy Meal versions, and… yeah. (*shudders*)
There was also the remote-controlled twelve inch humanoid RoboSapien, which felt like a cheaper alternative to A.I.B.O., but was less independent because of the infrared control pad and a multitude of pre-programmed moves. It could pick up small lightweight things or “dance”.
Somewhere in there, an old-school franchise called Transformers dominated all and survived for +25 years with its fictional extraterrestrial alien “robots in disguise” premise and non-motorized plastic toys, multiple TV series, and a separate big movie trilogy. (Owned, son.)

So, robot toys come in all shapes and sizes, and chances are they won’t leave us anytime soon. Hell, Japanese car maker giant Honda is still working on their own 4’ 3” promotional humanoid robot, A.S.I.M.O.!
Additionally, battery-powered toys are certainly nothing new and grow ever more intricate as Computer Aided Drafting programs allow for tighter tolerances and more intricate designs.

If I may indulge for a moment in how I operate, as a visually-oriented person with Asperger’s Syndrome (aka high-functioning Autism), I am drawn to intricate and/or flashy things, hence my long-standing obsession with transforming robot and building toys (regardless of if they come from Japan, the USA, or Denmark). As I am now 30 years old, those remain the basis of a refined sense of taste which has made me ‘grow-up’. (For example: not find as much satisfaction in Duplo, versus a continuing interest in the smaller and more variable Lego.)
For me, a transforming toy (and more rarely, a model kit) is a puzzle to be solved on multiple levels. I find it fascinating to look at something one moment, and then have it change into something completely different the next. For me, the key to an enjoyable puzzle such as a Transformer is that nothing is removed- it remains in one piece as it changes shape from one form to another, rather than becoming a bevy of individual pieces which you have to remove from the whole and rearrange. A transforming toy, for me, must be a Rubix’s Cube, or it is not engaging; I want to think about it as I manipulate it. (What and how said toy changes are then up to personal taste.) 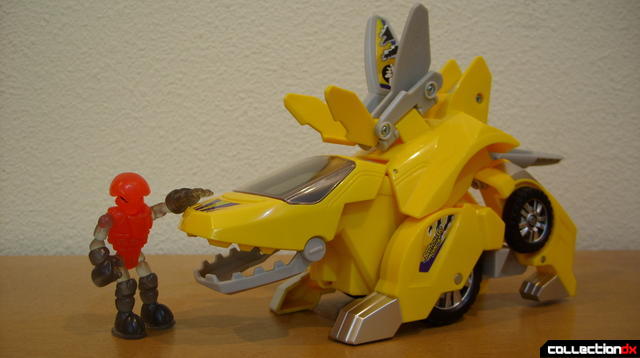 What then drew me to Switch & Go Dinos, and in particular this toy?
Well, first of all of the four basic-level $15.99 Dinos they have at the time this review is published (Tonn, Sliver the T-Rex, Horns the Triceratops, and T-Don the Pteranodon), this was the only one I couldn't figure out how it transformed on-sight without having it out of the box and in my hands. That’s not in any way a dis on the other three toys, mind you; just that I could not figure it out right then-and-there, so it was a puzzle worthy of my attention. (I also was not too concerned about which animal it changed into, the coloring, or the personality.)

Aside from the fact that I like transforming toys, there have been plenty of those beyond Transformers and Power Rangers that appealed to even younger children that I‘ve seen over the years. What makes this one stand out enough for me to get? Aside from the fact that it’s shameless in how it uses up all its hollow kibble to get a rather convincing stegosaurus shape (only the tail is a bit too small, in my opinion), and how the back legs don’t end up where you expect them to in Vehicle Mode, it’s more the spirit of this toy that got to me. 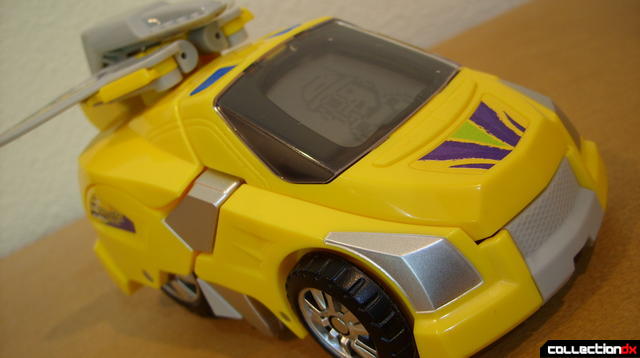 In the last few years, robot toys have gotten more complex in the number of motors and gear systems they use to move about. Remember Stinky the Garbage Truck from Matchbox a number of years ago? Mattel’s Big Foot around the same time? I know there’s a ton of ‘em out there I’m missing or have forgotten, but all of them had multiple electric motors, accompanying voices, and buttons (some hidden) to make them more reactive and lifelike. But, in my opinion, that’s part of the problem, and something that Switch & Go Dinos made me sit down and really think about. Is the future of toy robots going to be nothing but push-button and pre-choreographed dances? Oh sure, it might be funny to have a garbage robot fart and see it get embarrassed, but… that’s kind of it. After you get done with the flash of the gimmick (press the button and mind your fingers as it springs to life!) and memorize all its responses, what then is left for the child (or you, let’s be honest) to play with?
The answer is: “Nothing”.

Like the earliest generations of the collectable Barbie doll or porcelain figurines, all of these electronic toys I’ve mentioned are basically like fireworks- “Light the fuse and stand back!” You don’t play with them, you don’t interact with them. The toy does all the work for you. It is to be admired from a distance as long as the battery is on, and then when playtime is over it ends up squashed in the toy box, quickly forgotten, or given to the thrift store. Meanwhile, kids want to shake their robot hands, drag them through the sandbox, and sleep with them under bed covers; any one action of which will destroy even a half-way decent electric motor. Stinky can’t fan his backside anymore after a few days.

… Switch & Go Dinos are not robots with motors, but they are interactive.
Their gimmick is they combine fun super vehicles and dinosaurs into one toy, without having it is a humanoid dinosaur driving a vehicle, or a robot riding atop a harnessed dinosaur (both of which I’ve witness in the last 30 years, BTW). Then on top of that, they add the ‘robot’ element by having it transform, so you end up with quite the little trifecta. You have a car, a dinosaur (which is sadly missing any form of pose-ability), and a shape-changing robot. And your icing and cherry is a highly-controllable LCD + sound system with unique animation reactions for each mode and character… with a Volume Control and Auto-Off feature. (The speaker is inside the mouth? Awesome!) So, at the end of the day, you have a little Dinosaur Trivial Pursuit, or you can play with it and use your imagination conjuring up all kinds of scenarios involving a car which changes into a dinosaur. Bargain. 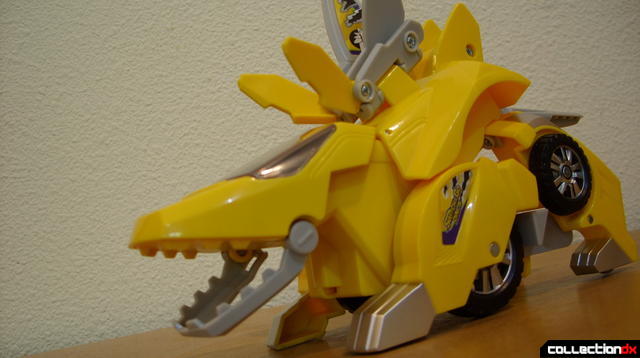 From a transforming toy-perspective, it is quite simple to change. The whole thing revolves around a giant battery/LCD/speaker block, but it flips around and takes care of its kibble responsibly enough that you don’t notice it or hinder it overall (unlike some other more-intricate transforming robot franchises I know…) The only part that snaps solidly into place (by design, perhaps?) is the light gray framework which flips under the belly. The plates on his back are friction-based, and the base of the tail only lightly ratchets into position, but are not so loose that they fall back around without intentional pressure to do so. The only thing I can think of that they could have changed immediately was adding friction to the jaw so that you could pose it closed or opened only part-way. (There also wasn’t any big reason why they couldn’t have made the jaw whole rather than a thin line of plastic; the speaker is loud enough that they didn’t need to worry about the jaw’s plastic absorbing sounds.) A twisting neck joint would not have been out of place either, though from the way it transforms I can see how adding even four single-axis hip/shoulder joints could have made it too expensive and complicated.
I love toys that acknowledge when they mode-change. And not only does this one know when it’s a dinosaur or a car, but it monitors movement of the big wheels and provides additional effects just for that!
Decal and paint applications are clean, crisp and vibrant; as are all sound effects and LCD animations.

At the end of the day, the Switch & Go Dinos Tonn the Stegosaurus toy is filled with charm and creativity that encourages interaction but makes you giggle at the same time. Baby’s first Transformer? Yessir, yessir! (And far more amusing than those bloody Playskool Go-Bots a while back, even if they can’t pose.)

Sounds like fun! My sister and brother-in-law just had their first son last month, but I already got him a G1 Optimus (US re-issue edition) and a Megatron (pirated out of the DoTM Japanese two pack with the accessories from the eHobby exclusive black version).

Something like this would be more of his speed when he figures out what his fingers do.

I'm planing to review another, larger one (if I can get my hands on it soon).

I think they would be a great way to get my daughter into robots once she is a little older.