Let me start out this review by admitting that I know next to nothing about wrestling. I know that The Rock is a cool guy, and I know that I love Rowdy Roddy Piper in They Live. That’s about all I’ve got, but when I saw that Playmates Toys was doing a TMNT/WWE crossover toy line, I was sold. It’s the kind of thing that I could not believe did not already exist. Over the years, there have been toys of the Ninja Turtles in space, as adventurers, as monsters, as Star Trek dudes, in the army, as freakin’ clowns, and just about anything else you could think of. How had there not been proper wrasslin’ Turtles? 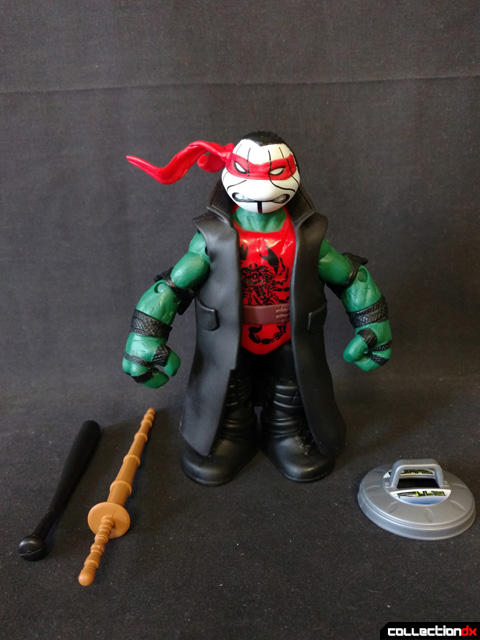 The time has come for this oversight to be corrected. Playmates Toys has debuted their Ninja Superstars lineup with four figures. I received my favorite turtle, Raphael, dressed as Sting for this review. The Ninja Superstars line features larger figures than the regular Playmates Toys TMNT line, standing around six inches tall. The base turtle designs are from the current TMNT cartoon being shown in Nickelodeon, so they may seem a bit odd to older fans. 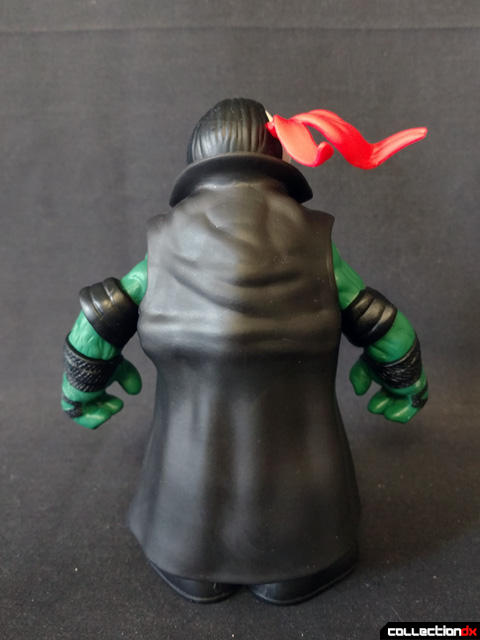 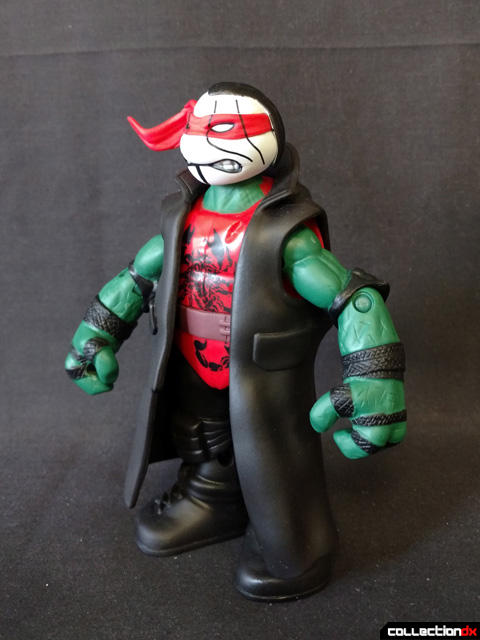 The sculpting of the figure is generally nice. I’m really impressed by the shaping of the soft plastic trenchcoat. The coat is permanently attached to the figure, but there is a nice level of detail sculpted to show what would be underneath, like shell and belt details. The printed scorpion (get it, Sting?) on the torso looks great. The whole figure except for the torso is molded in gummy, solid PVC, so you could really knock Raph around without risking any damage. 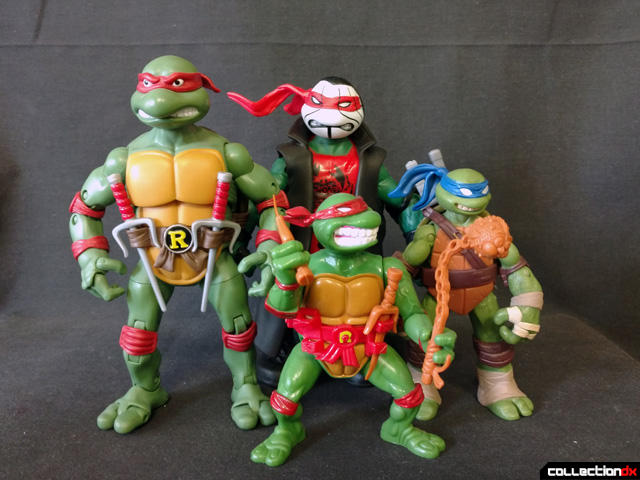 Here’s Raph as Sting alongside some other regular Ninja Turtles releases from Playmates. 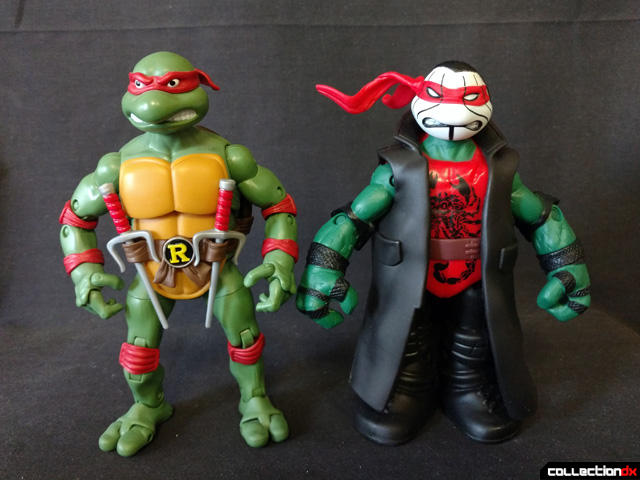 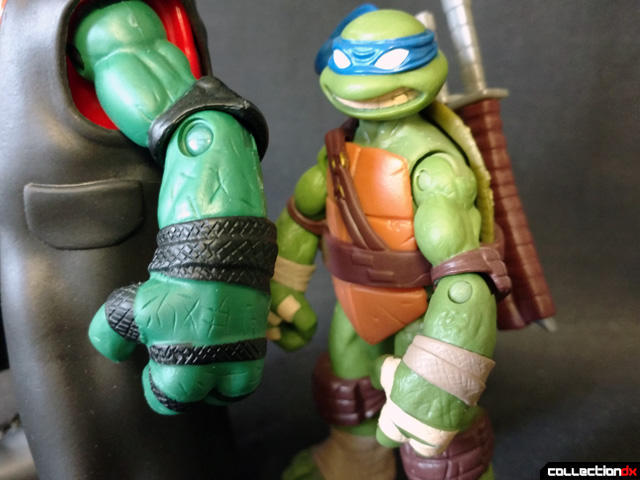 I thought it was worth showing a comparison of the level of detail between the larger Sting Raph and a regular line Nick Turtle sculpt. For all the extra size, Playmates has not really added any additional detail. The sculpt and molding are pretty soft and doughy, which is disappointing when compared to their other large-scale figures from the Classics line. The Ninja Superstar line figures cost $20 due to their larger size, which puts them around the same pricepoint as Marvel Legends or Star Wars Black. The Ninja Superstars figures are certainly more massive due to their bulky sculpting, but are nowhere near on par with other $20 action figures in terms of sculpt, painted detail, or articulation. 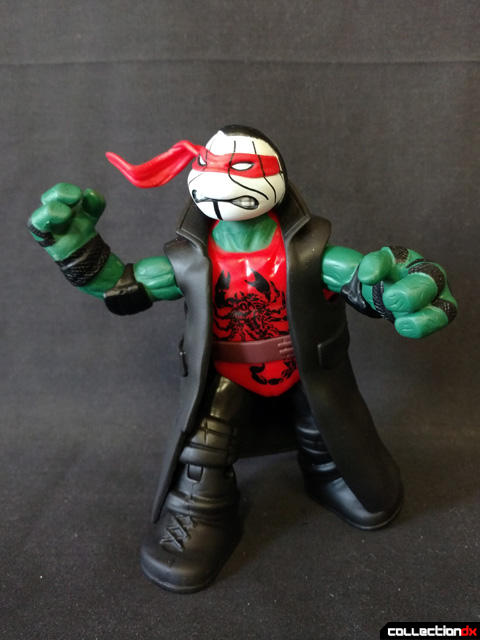 Articulation is so-so. There’s hinge and swivel joints at the shoulders, elbows, hips, and knees, with a ball-jointed neck and swivel wrists. The coat limits a lot of movement in the legs, and Raph cannot get his arms too close to his body because of the shoulders. It’s a sufficient setup, but the chunkiness of the sculpt and limited movement will make it difficult to get Raph into any really convincing wrestling poses with other figures. 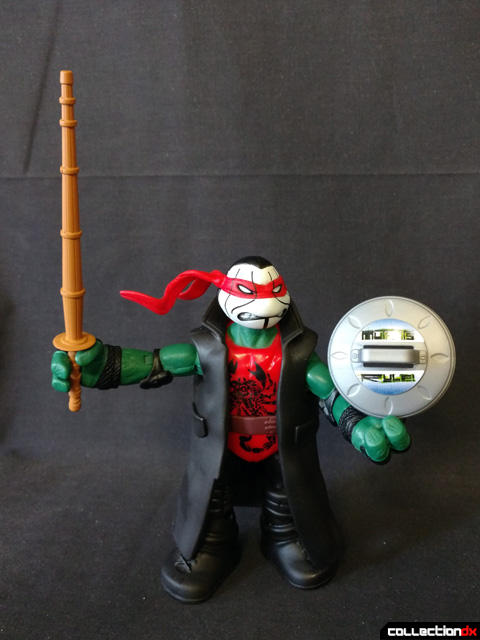 The accessories included are pretty cool. Raph comes with a kendo stick and trashcan lid. I have no idea if kendo sticks get used in WWE, but it’s a fun accessory that ties back to Raph’s ninja side. The kendo stick is molded in a rigid plastic with nice detailing, and will make a great accessory for plenty of figures. 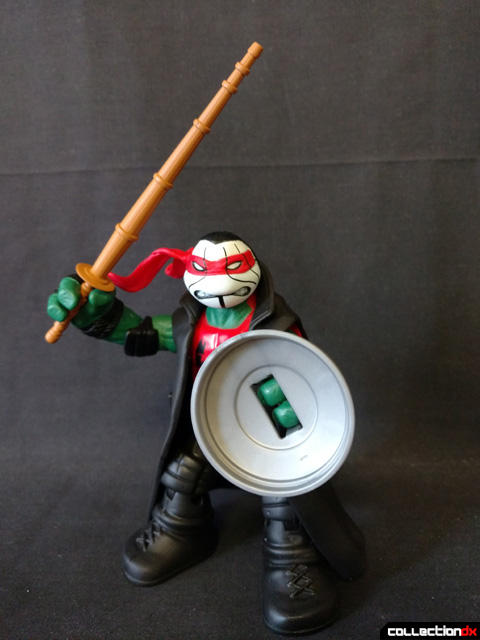 The trashcan lid shield has a sticker on the top, which means you cannot see if when the figure is holding the shield by its handle. Seems like the sticker would have made more sense applied on the underside of the lid. 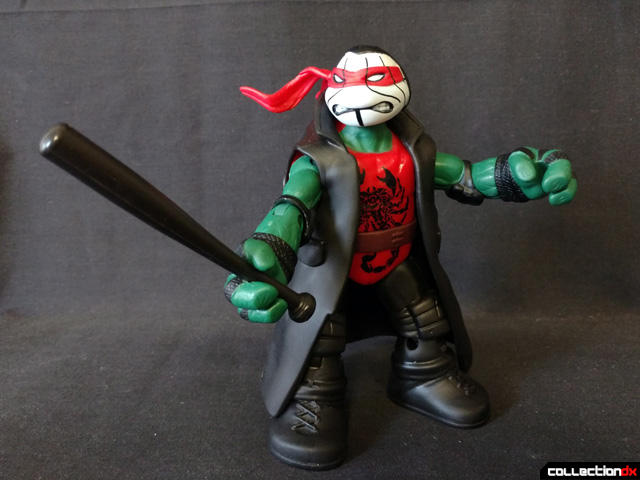 Also included is Sting’s trademark baseball bat. Apparently, dude brings this black bat with him into the ring and sort of beats people up with it. Sting mostly seems to poke people with the bat, including a man named Lex Luger, so that’s great. The bat even has its own Twitter account! 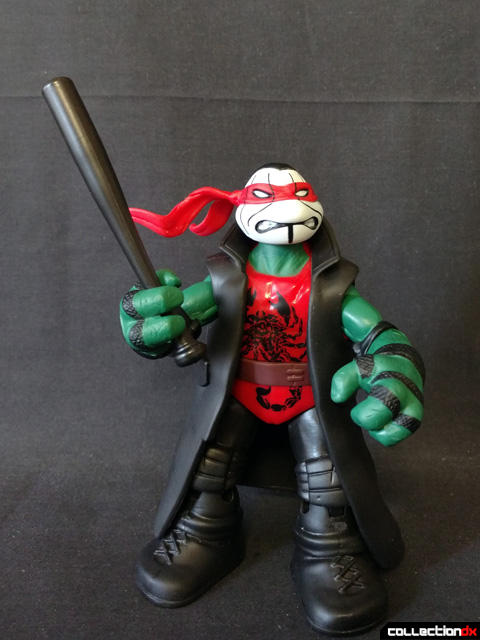 Unfortunately, the bat is molded in the same very soft plastic as the coat, so it is really bendy and warped. Just putting the bat in Raph’s hand deforms the handle a little. It looks the part, though, and completes the Sting ensemble, so I am glad it was included. 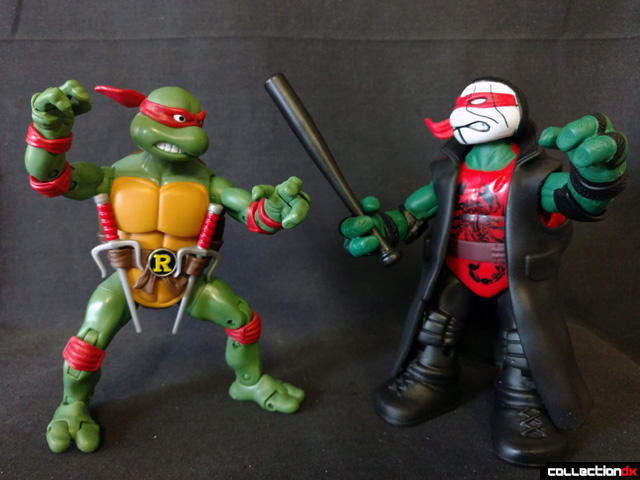 I had to look up Sting, but he seems pretty great. He’s an old man who dresses up in fabulous robes and black leather, with face paint inspired by The Crow. Wrestling has always seemed real dumb to me in the best kind of way, and a guy like Sting really epitomizes that, making him a great choice for a toy like this. Unfortunately, I don’t think this figure takes it far enough. Other figures in the line feature a great level of detail and color, but Raph as Sting seems a little bland. The coat and legs are just straight black, which is true to some iterations of Sting’s costume, but he’s also appeared in some pretty flamboyant getups that would have made for a much more exciting figure. 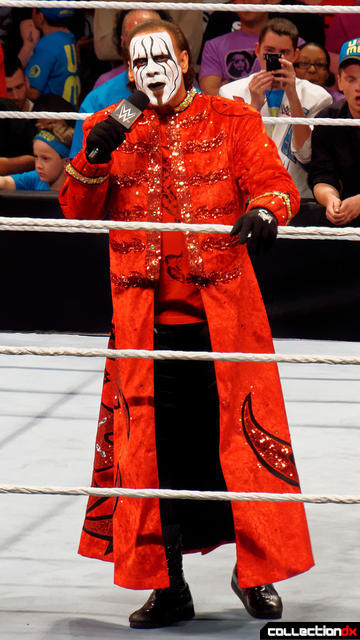 Considering that Raphael’s color is read, something like this costume would have been much more exciting. (Taken from Wikipedia, https://en.wikipedia.org/wiki/Sting_(wrestler)) 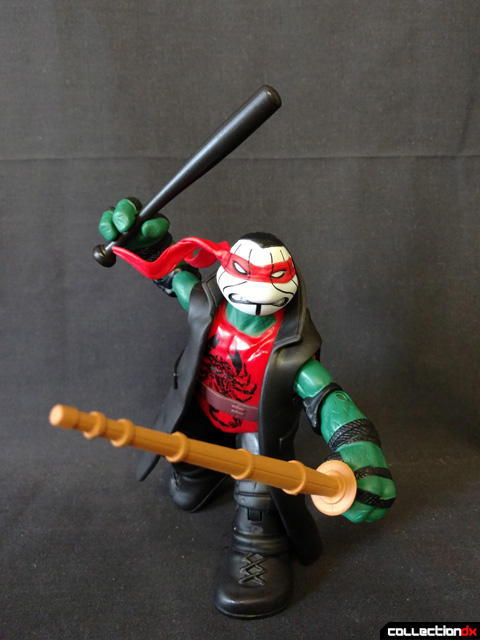 Despite my nitpicking, it’s a fine figure. The Ninja Superstar line is currently a WalMart exclusive, so actually finding them can be a bit of a crapshoot depending on your location. I certainly have not seem any of them in stores by me. I think Raph as Sting is one of the weaker figures in the first wave, but I’m looking forward to finding the others, because they look great and are a fun combination of goofy things. Thanks to Playmates Toys for sending Raph as Sting along for review!