Yes, I'm reviewing all four of them at once.

That day is today. Or sometime last month when they hit store shelves (at the time of this writing). 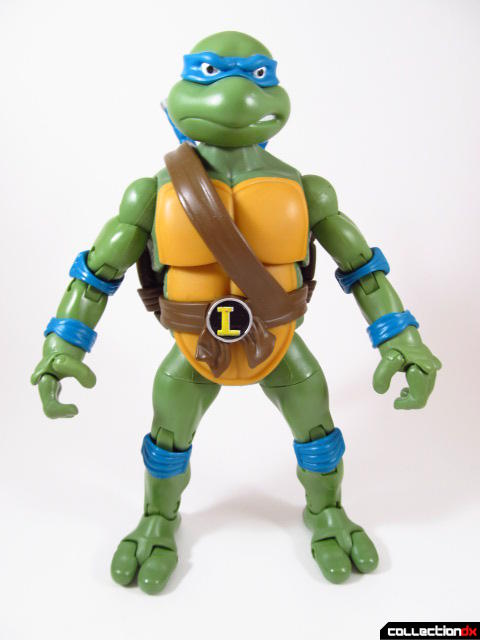 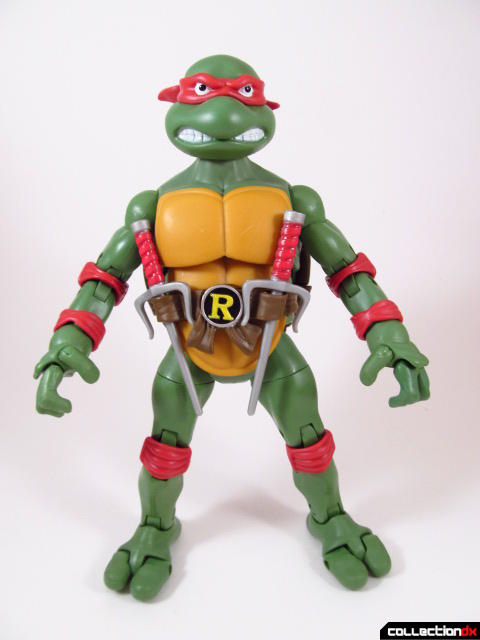 Playmates Toys have seemingly come out of hibernation to reveal several new Teenage Mutant Ninja Turtles toy lines, one of which happens to be the TMNT CLASSIC COLLECTION. The Classic Collection is all about bringing modern toy engineering to the Ninja Turtles as they appeared in the cartoon. Of course, there are some discrepencies that make me believe that they went with a hybrid approach between the show and the original toys, but more on that later! I should also point out that these are the fun-loving light-hearted goofs from the cartoon and not the violent, dark turtles from the original comic. 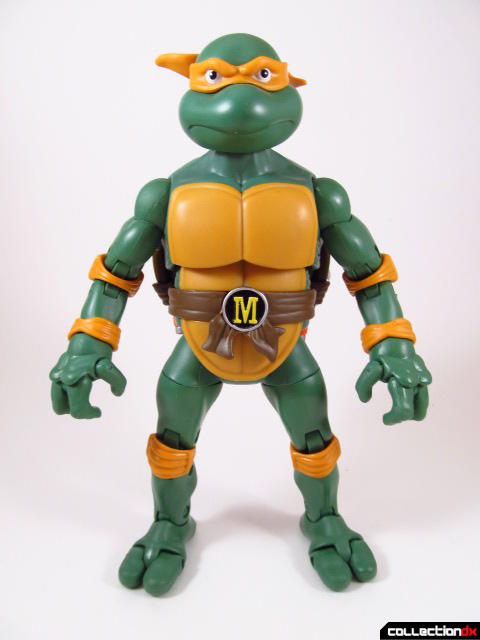 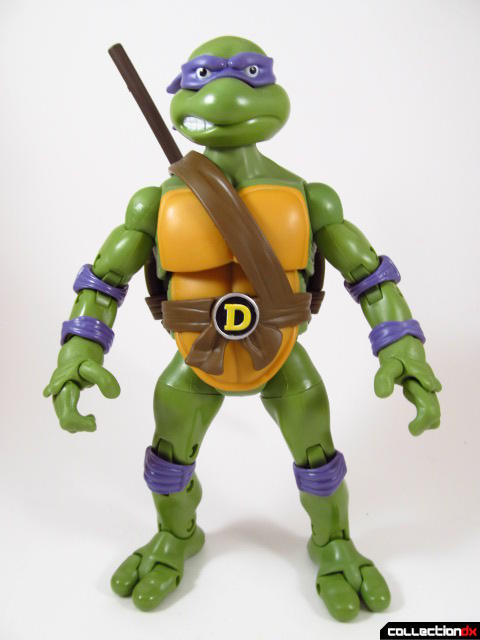 You guys may be wondering why I'm reviewing all four of them at once instead of one at a time. Well, my babies, that is because they are all the same mold except for the heads, weapons, and belts. While each turtle is basically the same, they did cast them in different colors of plastic. So... that's something, I guess. I can hardly complain though because the turtles from the cartoon looked the same anyway. The original toys cast each character in a different color to help make them unique. Plus, the added straps on Donatello and Leonardo were something that wasn't in the show, either. That's one reason why I say these designs are hybrids between the show and toys. 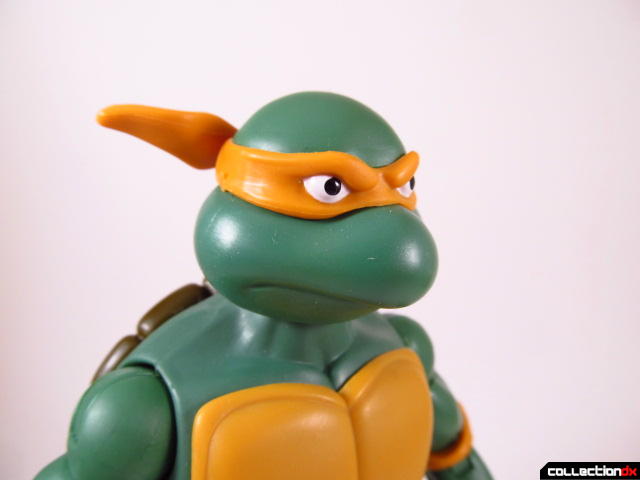 So, I guess I'll start with the elephant in the room. GET OUT OF HERE, CHARLIE! YOU KNOW YOU'RE NOT SUPPOSED TO BE IN MY ROOM WHEN I'M REVIEWING TOYS! YOU'RE AN ELEPHANT. YOU DON'T EVEN HAVE HANDS. 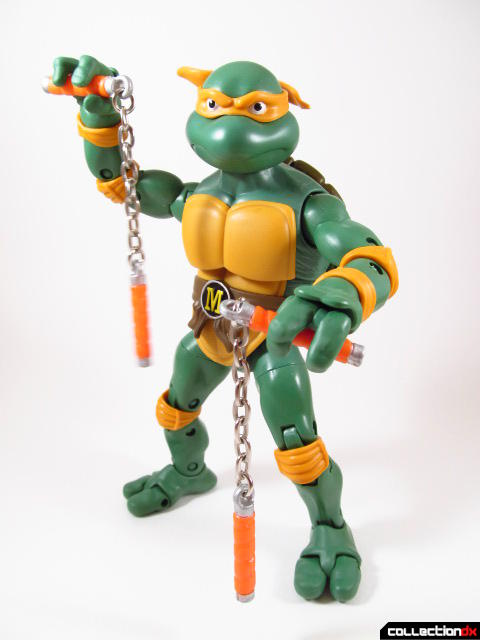 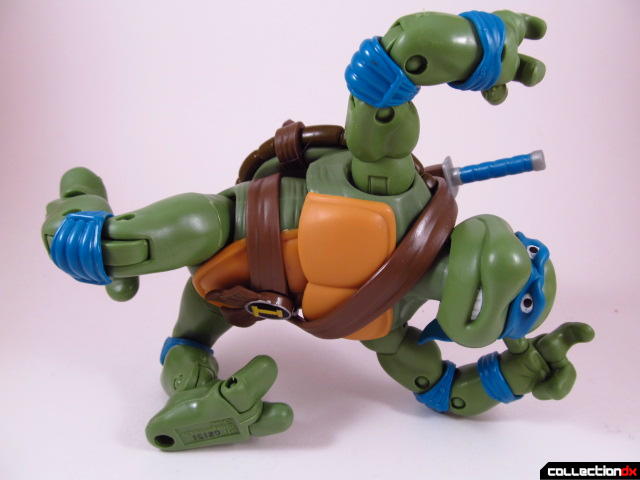 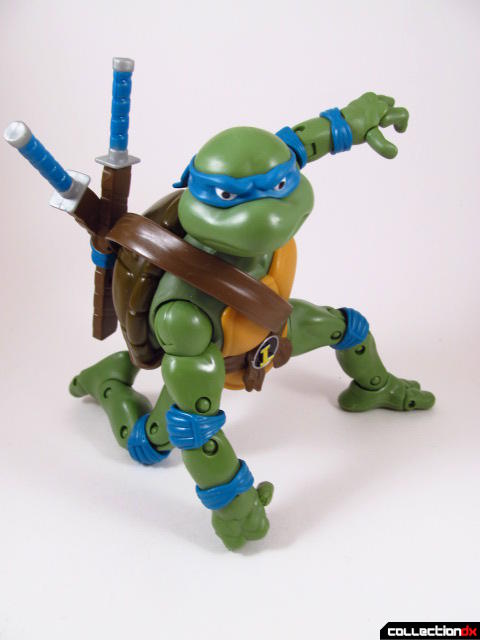 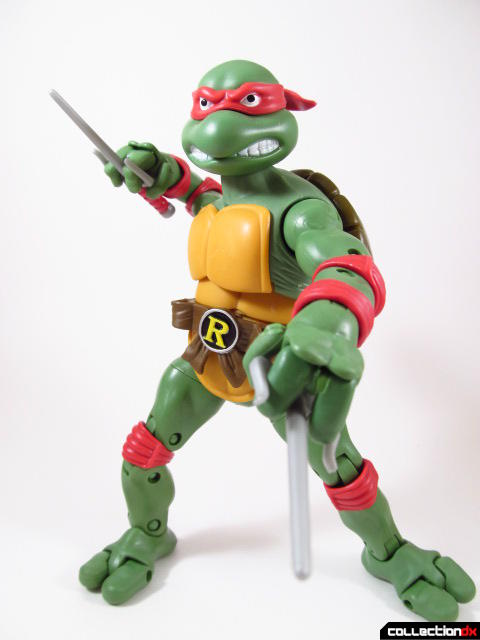 I do have a couple of gripes about their articulation, though. First off, the hands work amazingly well, but I can see how some people don't like how they look. It kind of looks like they're wearing gloves or something due to how the joints are cut. It doesn't really bother me at all though, because I love the fact that they can hold or do anything with their hands. 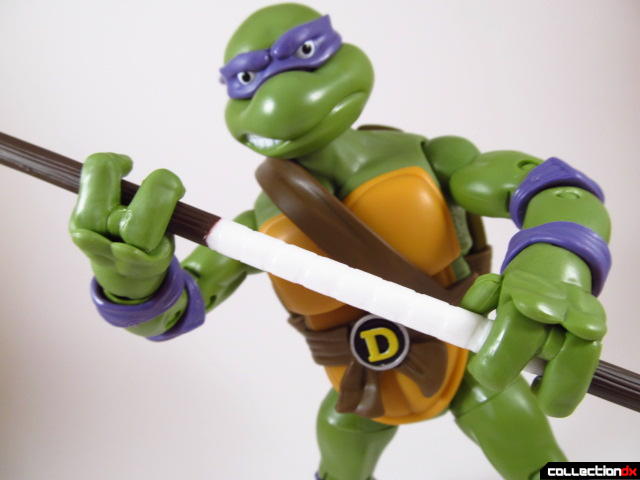 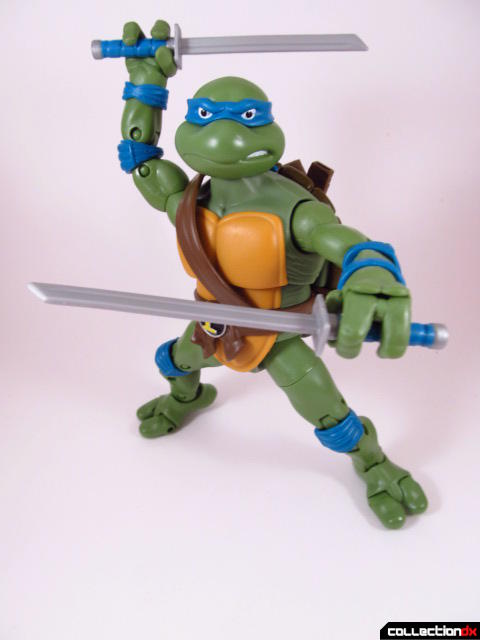 My real concern is with the ankles. They can swivel around and move up and down, but there's no tilt. You can kind of work around it by repositioning the toes or something, so it's not a complete failure. This complaint is fairly minor, but it would have made these figures really stand out more if they had ankle tilts. 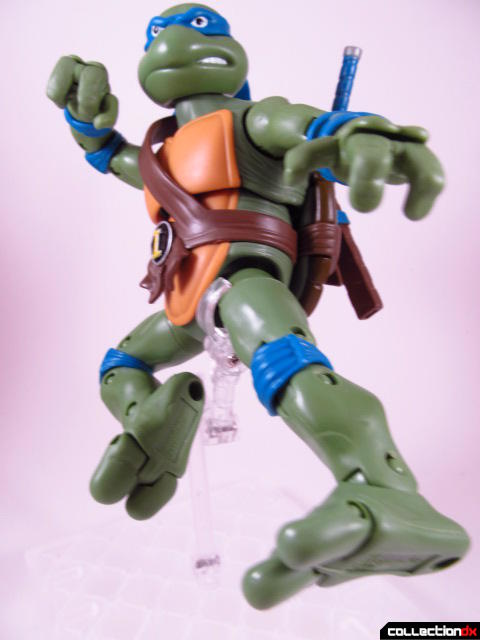 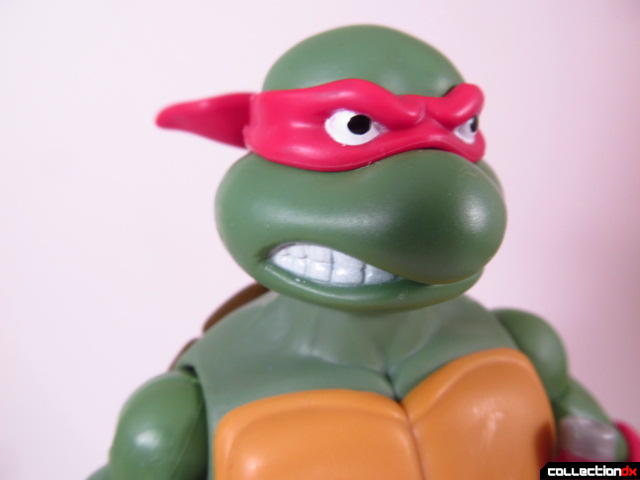 Next up is paint and color applications! Michelangelo has orange bands, Leonardo has blue bands, Donatello has purple bands, and Raphael has red bands. Honestly, the paint apps are gorgeous. I couldn't find a single error on the coloring of these figures, except for one thing: the eyes. The eyes on these figures border from "acceptable" to "HOLY SHNERPLES, WHAT HAPPENED TO YOUR FAAAAAAAAAAAAAAAAAAAAAAACE." 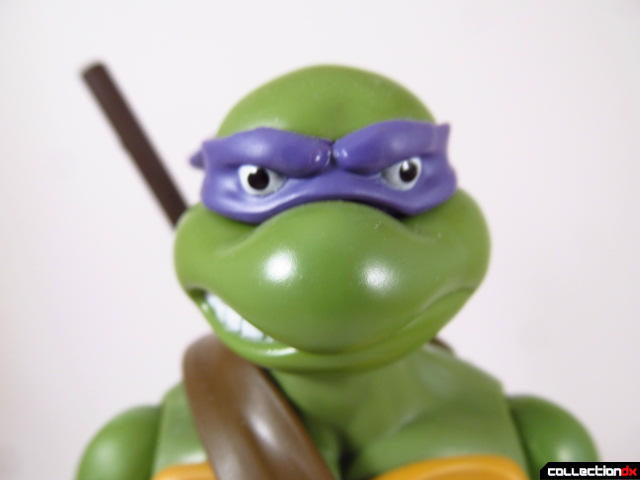 My figures turned out alright, but there are several people out there who have found some SERIOUSLY derpy eyes. The biggest problem with this is that Playmates decided to give them pupils like in the show, whereas the toys only had white eyes. In my opinion, that made the toys look more like superheroes and I loved it. I would have really preferred if Playmates had decided to just use white for their eyes. It would have made everything SO MUCH BETTER. 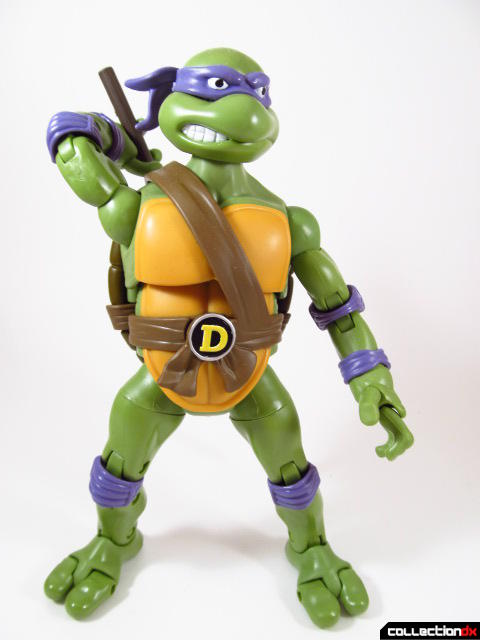 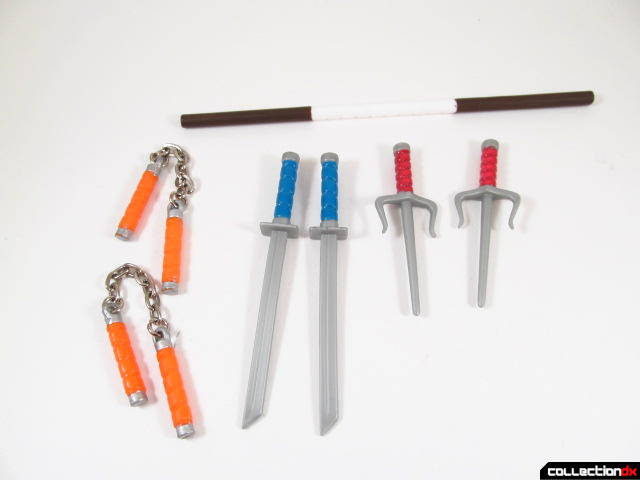 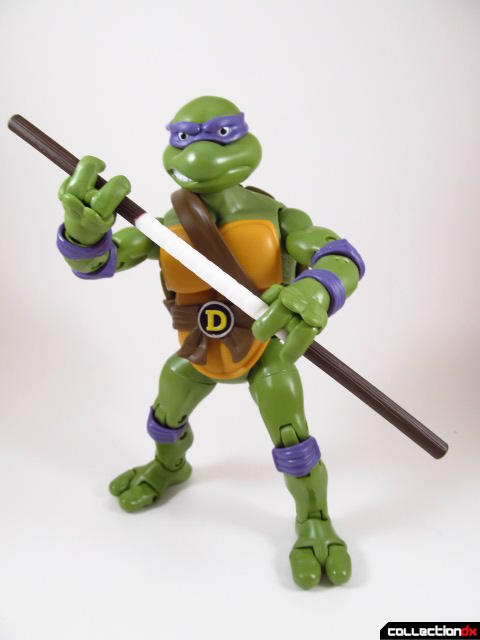 CHARLIE! WHAT DID I TELL YOU!? GET OUT! 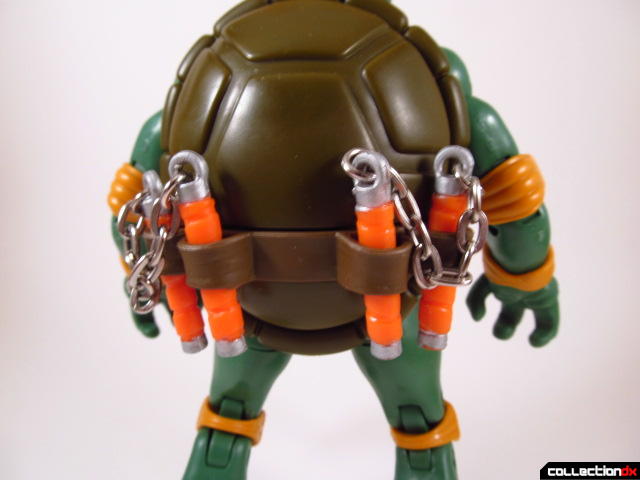 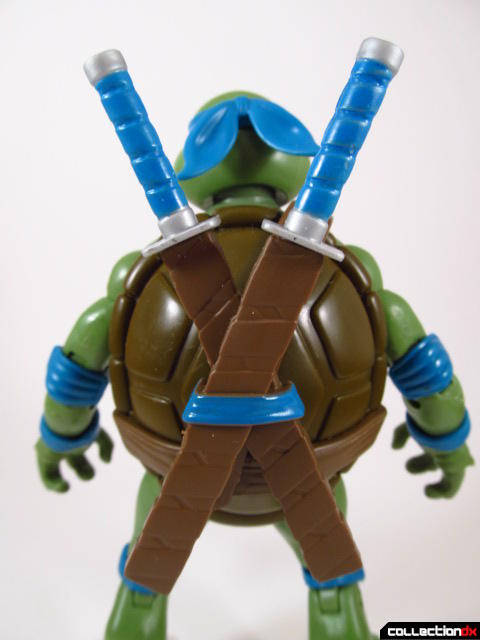 The weapons have minimal paint on them, but I'm glad that they had the decency to paint them at all. They are all color coded to whoever owns them (so you don't get confused). Plus, every figure has a place for weapon storage! That was a big problem for me as a kid because I ALWAYS lost all the tiny pieces they came with. 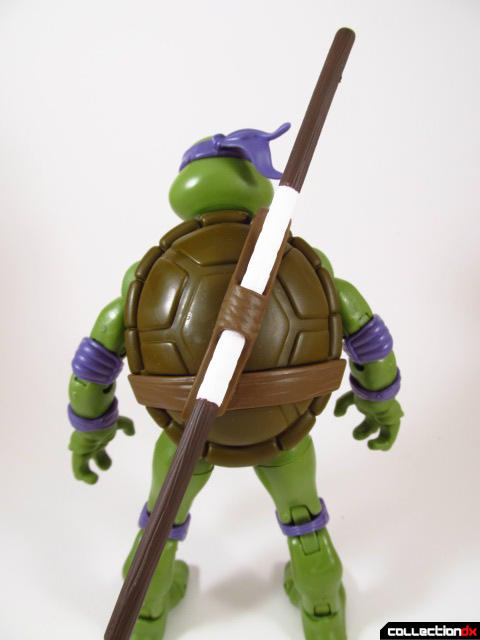 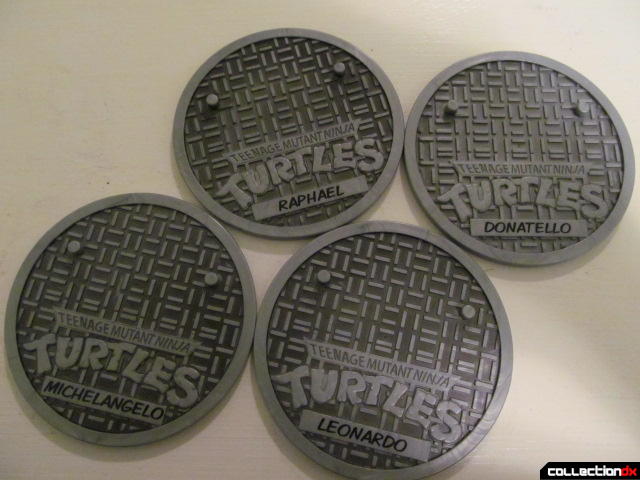 Also, they each come with a Manhole Cover stand embroidered with their names! And I TOTALLY took these pictures at the same time as the others. I mean, I would never forget to take pictures of something. Nope, not ever. 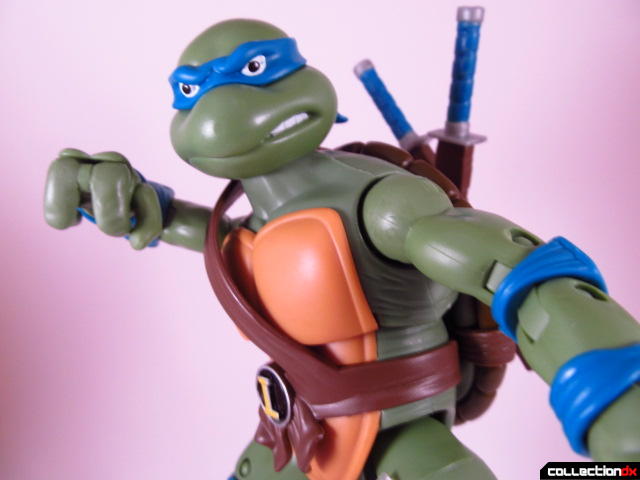 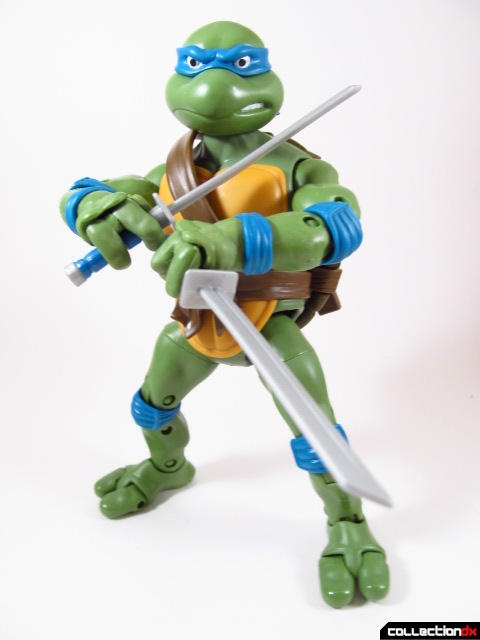 All in all, these guys are pretty excellent in my book. These are the definitive action figures for this incarnation of the Turtles. Just make sure to check the packaging for any quality control issues with the eyes. Whether you get all 4 of them will depend on how much of a fan you are, but I think you'd be selling yourself short if you didn't get at least one of them. (You know, if you're into them and stuff). 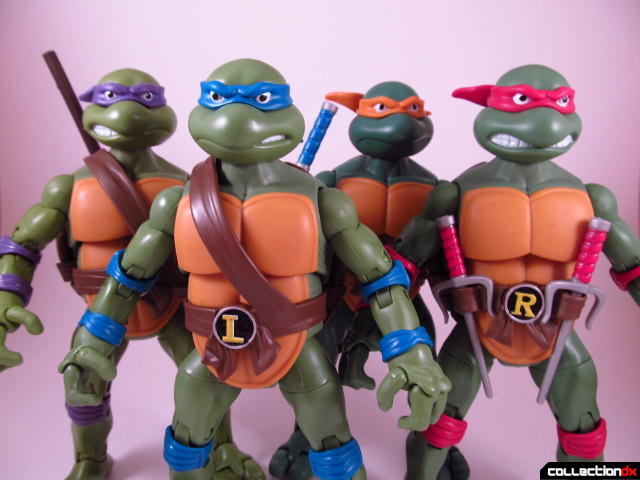 awesome review ! i had originally only bought Leo, but this review gave me the push i needed to get the rest of the gang. Can't wait to pull off some insane poses. Now if only we'd get a Shredder and Krang

Oh man. I want a Krang from this line SO HARD. Playmates said that if the Turtles sell well, they may release more figures in the line! So here's hoping!

wow. 4 birds- one stone. great review and awesome pictures. i bought Raphael from amazon. sweet figure. i like the design and heft of this super-sized turtle. im looking forward to buying the rest. thanks!

I'm glad I could be of service!

Now THIS is the definitive action figures for the TMNT line.

So far I've only bought Raph, but I do like them! I just don't like how huge they are, and that they don't really need the fingers and toes to be articulated. I'm glad the hands can hold things, at least, 'cause Marvel Legends had already proved how useless articulated fingers could be. Seems like a lot of designers that make articulated fingers just expect them to wrap around an accessory and stay there without any...you know, grip strength. They thought ahead with these guys, though, and added a sort of curve inside the fingers.

I would probably be in love with these guys if it wasn't for the new 4 inch guys. Now those blew me away! Absolutely fantastic. If these classics ones had been around that size or 6 inches then I think I would be much more happy with them.

Great review! You definately made me want to go out and get them now. I was just wondering what size/scale they were in as I didn't see it in the review.

I just did a small comparison. Seems like my Leo is just a few inches taller than a deluxe size transformer.

Sorry, I don't normally think to add size comparisons. They are right at six inches. So, they are the same height as Marvel Legends and slightly smaller than DC Universe Classics.

These are pretty neat. Love the actual chain on the nun-chucks.

YEAH MAN! That made me SO HAPPY when I started playing with them! There was a WHOLE lotta love that went into these figures.

These look like they jumped out of the very first TMNT intro, (http://www.youtube.com/watch?v=rS-qFdw-v_o)
I've always preferred them in that look, only later on the animators got more sloppy art wise.

I love the man hole covers they're a really nice touch!