When Santa came to my house this year, he brought one of the things on the top of my son's list - the Power Miners Titanium Command Rig. 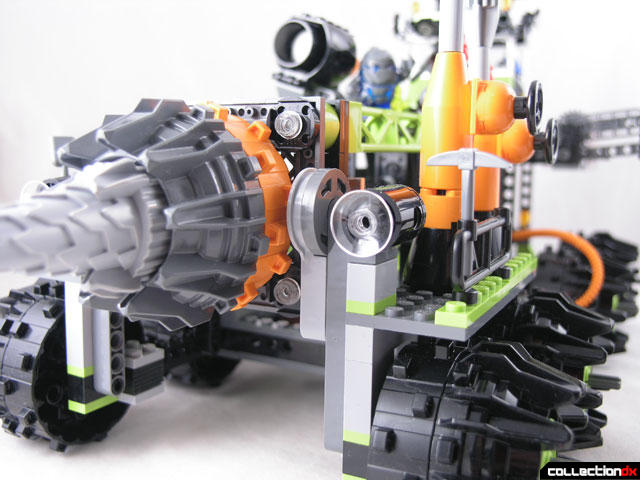 So of course, being Mr. Independent 7-year old, he brought the set right downstairs and began putting it together. He got pretty far, before calling his dad in for help. 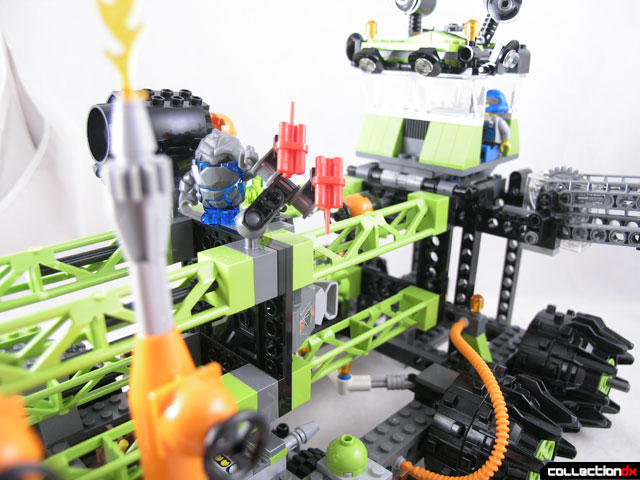 This command rig is a big set, with over 700 pieces. He had them sprawled out all over the floor, and by the time I got involved more than a few parts had gone missing. 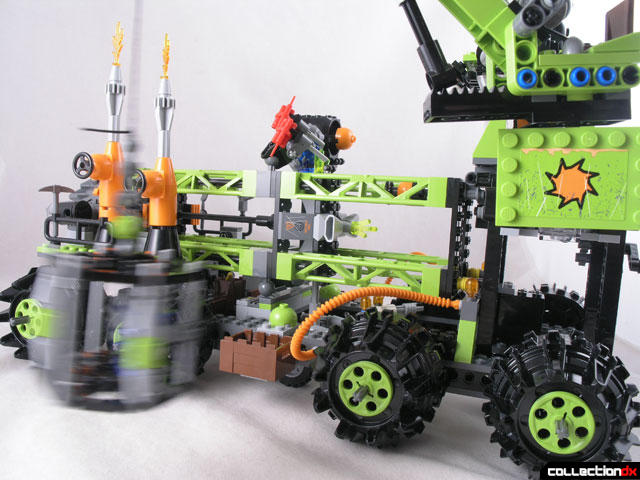 But before we talk about the build of this thing, lets hear what LEGO says about the set:

The ultimate Power Miners mobile base!

With a rumble of wheels and a powerful planetary drill, here comes the Titanium Command Rig! The Power Miners’ mobile headquarters transforms from massive rolling vehicle to vertical mining platform with dual-geared spinning drill and lots of gear and accessories. Just watch out for the giant red rock-throwing monster and his lever-action throwing arm!

By the time I got involved, Nathan had most of the frame done, but a closer inspection showed he had misplaced some parts requiring that I rebuild it from scratch. 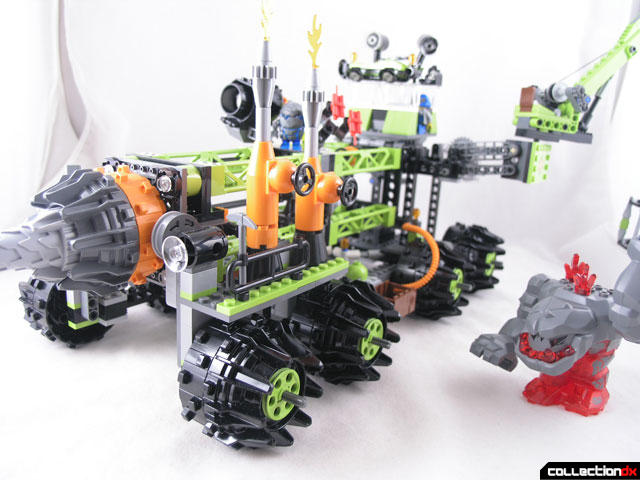 I'm not going to go into this thing brick by brick, but putting the set together was not that difficult. It's been a long time since I put a regular Lego set together, but a lot has changed since I was a kid. There are a lot more "Special" pieces than I remember, and the directions seem to be less explicit than I remember. On more than one occasion I missed out on a part because I didn't see it added in the instructions.

Regardless, we got the whole thing together and a few hours, and as the gimmicks began to come together it was cool to see how the different parts we were working on were coming together. The completed set is as much a finished toy as building kit.

The Titanium Command Rig is loaded with play value. The most obvious is the giant rotating drill on the front. When the rig rolls, the drill rotates in two different directions. This rotating action is activated by two rubber wheels, and a unique gear system causes part of the drill to rotate in the opposite direction. 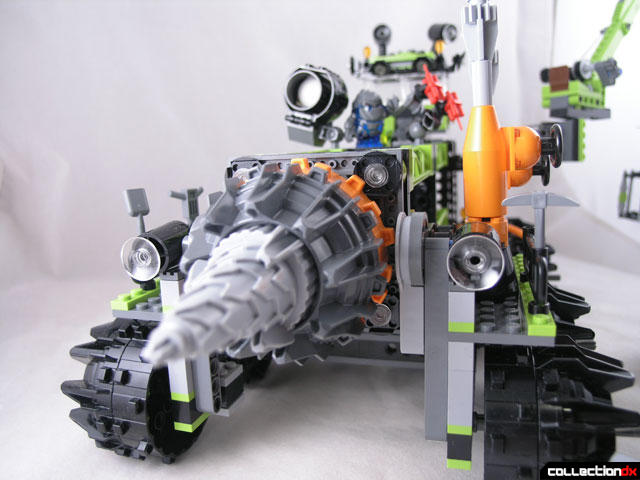 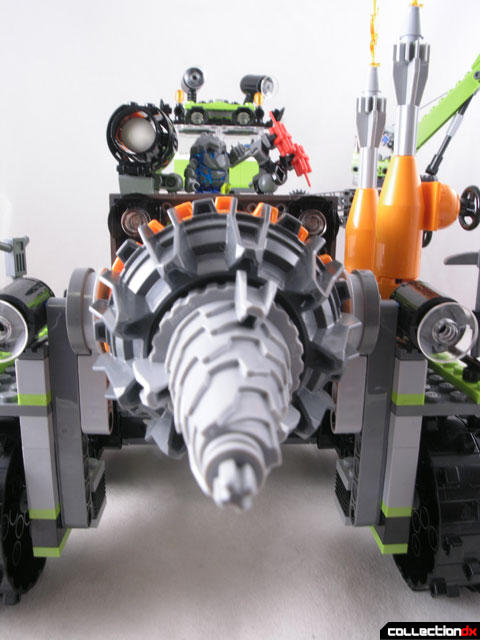 On top of the body of the drill you will find two launching gimmicks. One is a launching net gun with a real net, the other launches two bundles of dynamite. 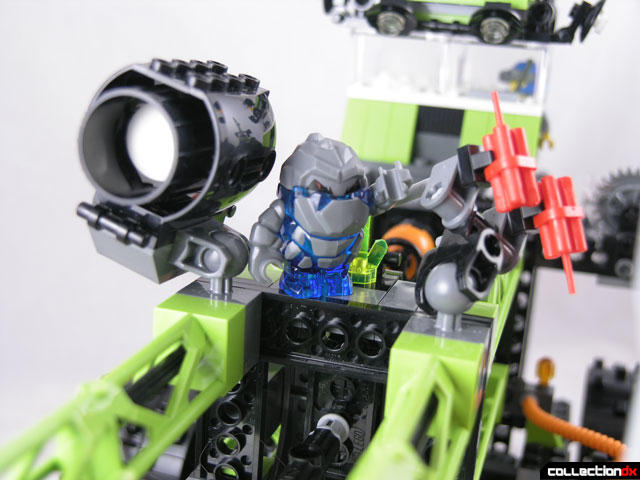 The back of the rig features the Command module, that has moveable spotlights. On the side there is a fully functional crane with real rope and hook. The crane assembly can move up and down by turning a crank on the other side. On the very back there is a winch, with another real rope and hook. 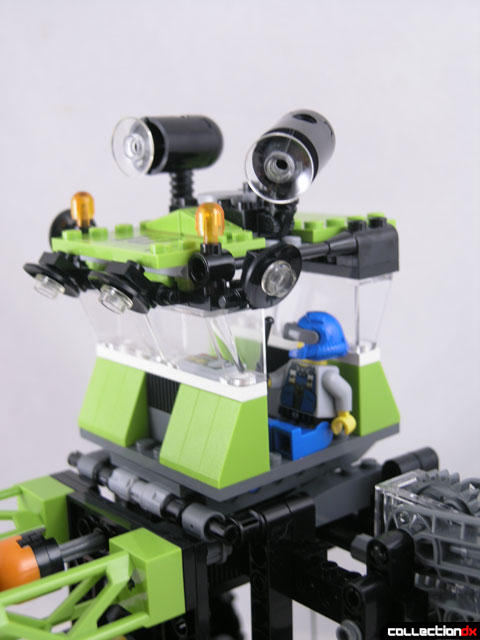 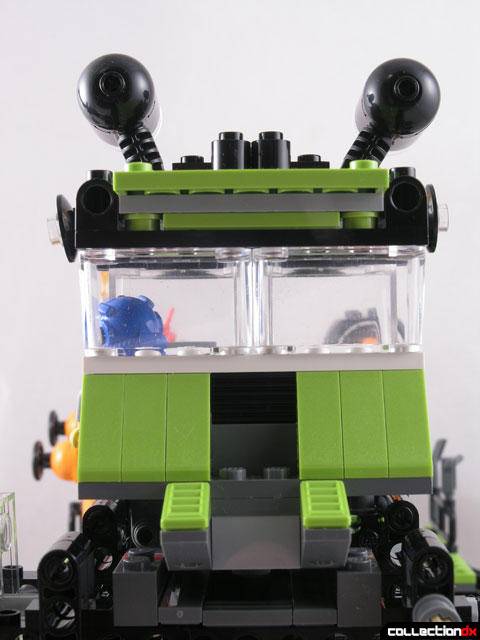 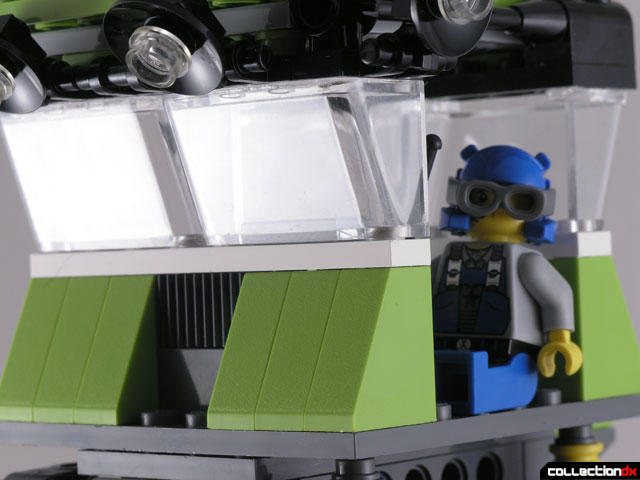 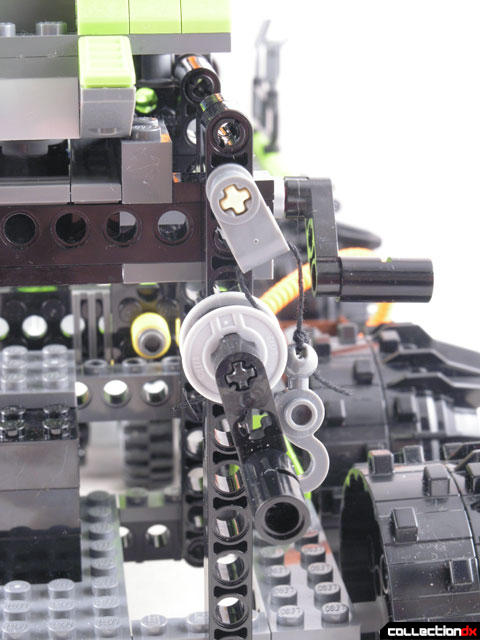 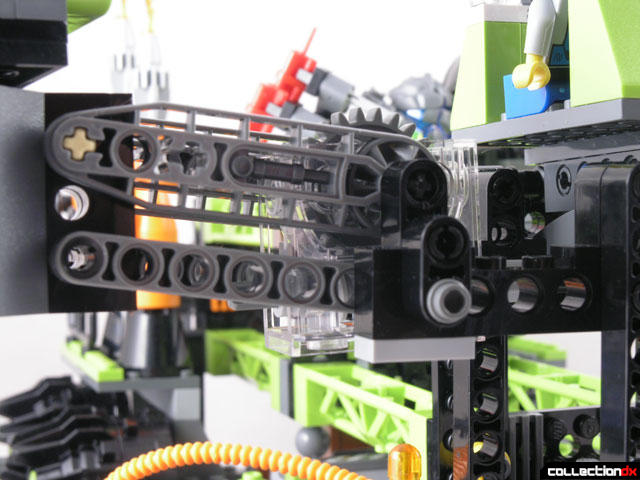 The Command Rig transforms into a vertical drilling platform. You need to unlock the tower and then tilt up the body, while supporting the Command module, which rests on top. This mode reveals a few additional gimmicks. 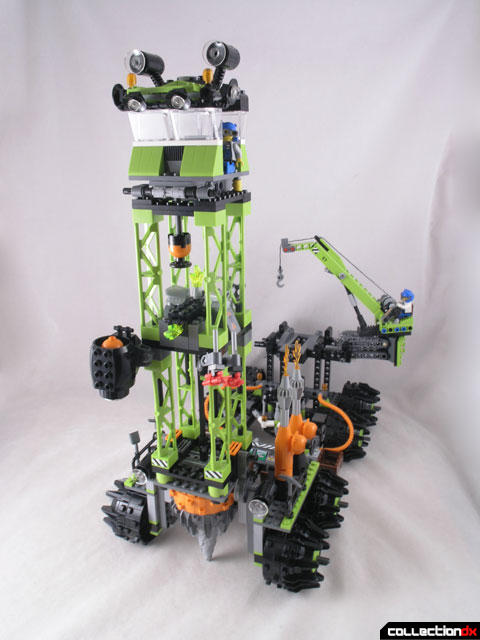 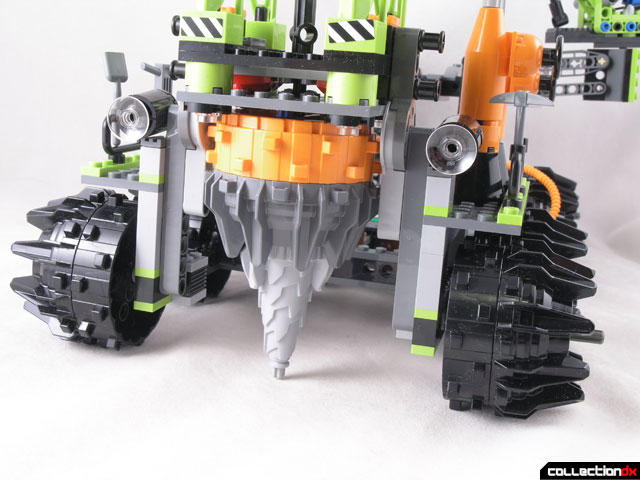 First, the drill on the tower still rotates, this time it turns by rotating a knob that sticks out the side. When this turns, multi-colored jems rotate on the section. 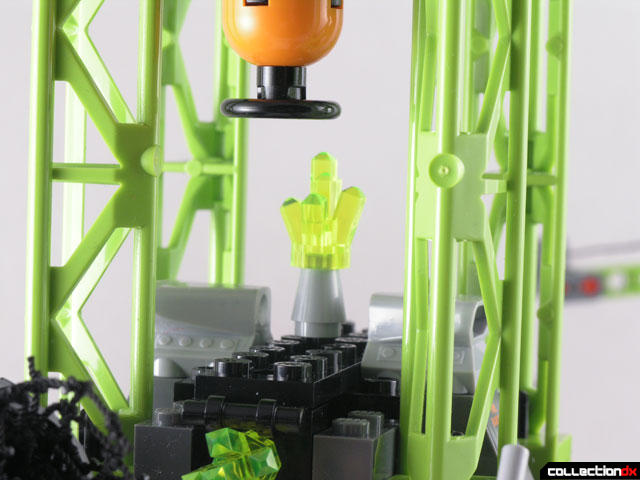 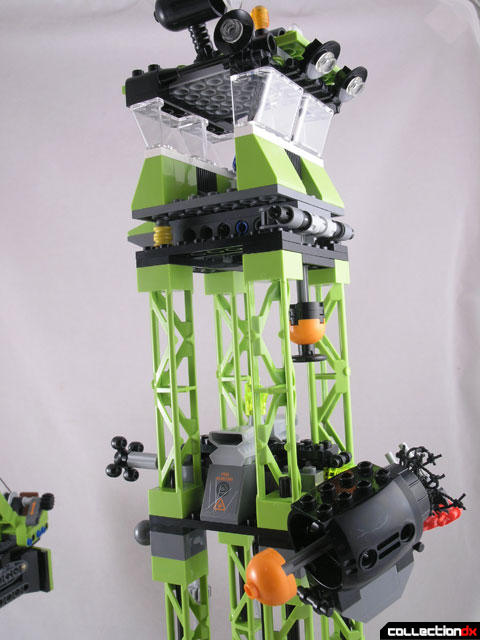 With the tower up, the frame reveals another control area, this one with two computer terminals and a storage compartment. I like the details on the computers. 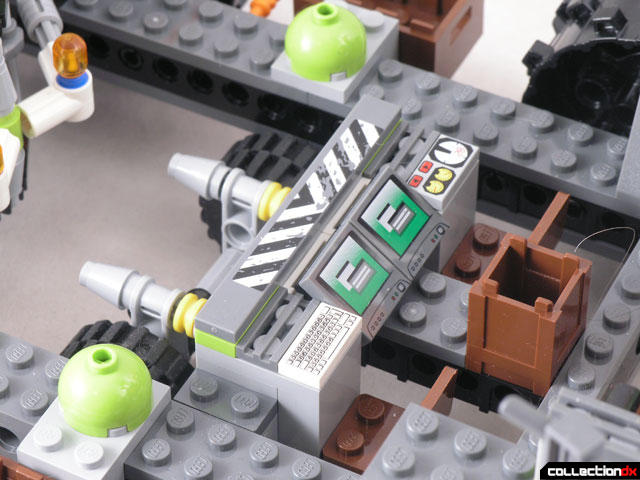 Behind that is a storage area with a cage and holding arms. the cage is for captured Rock Monsters. The crane is perfectly aligned to pick up and place the cage in this position. 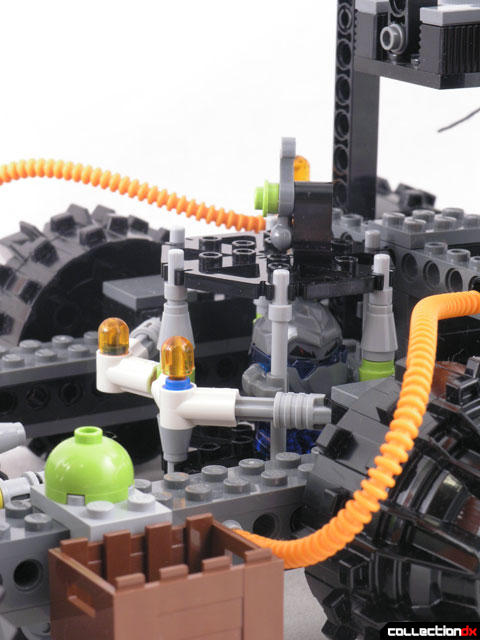 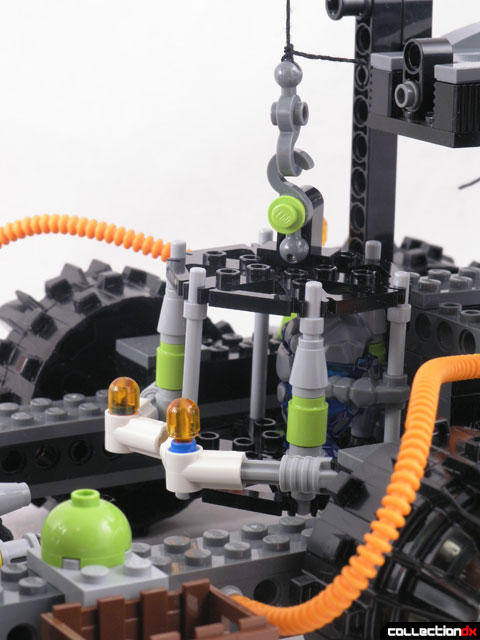 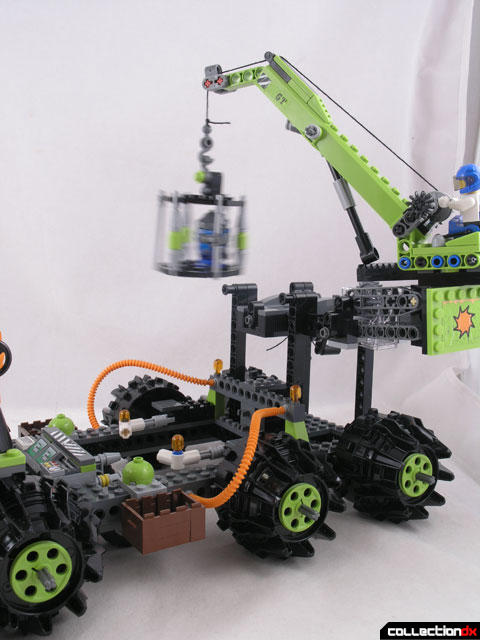 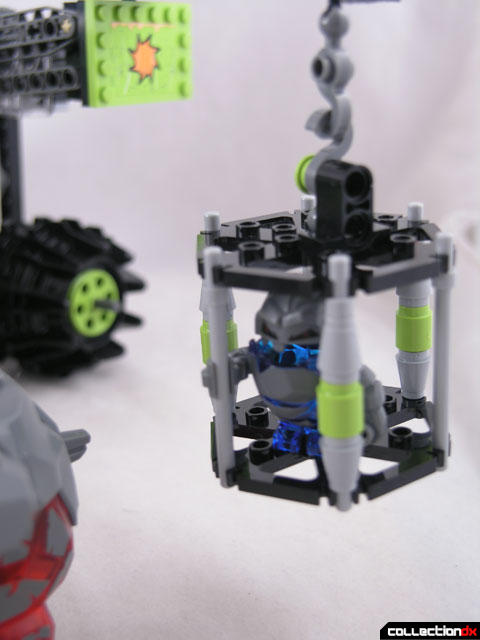 The included mini-figures come with a bunch of mining accessories such as a shovel, pick-axe, saw, communicators and oddly enough - a Banana. I guess even miners need to stop for lunch. 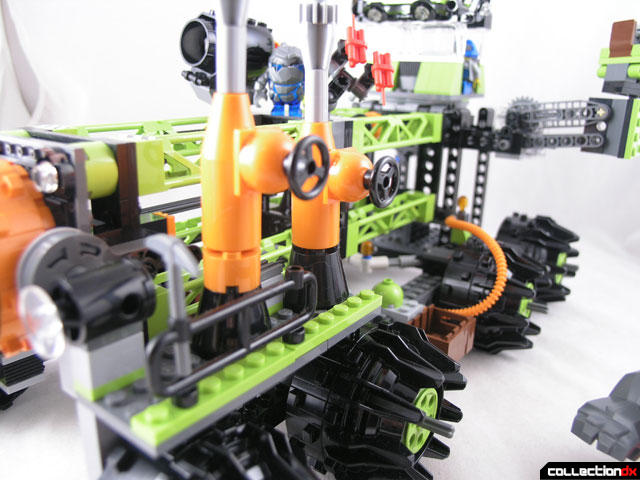 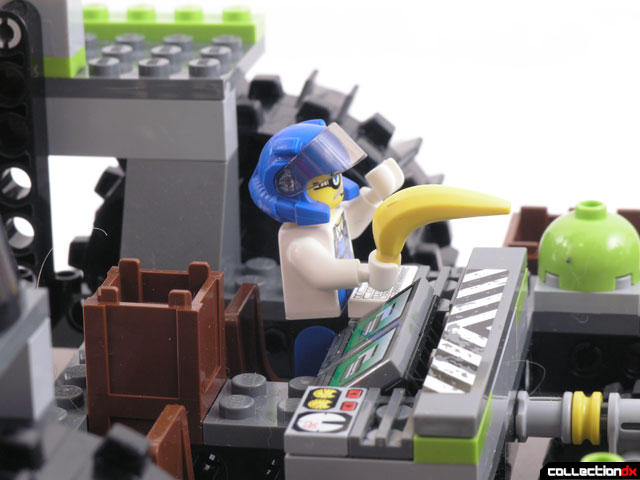 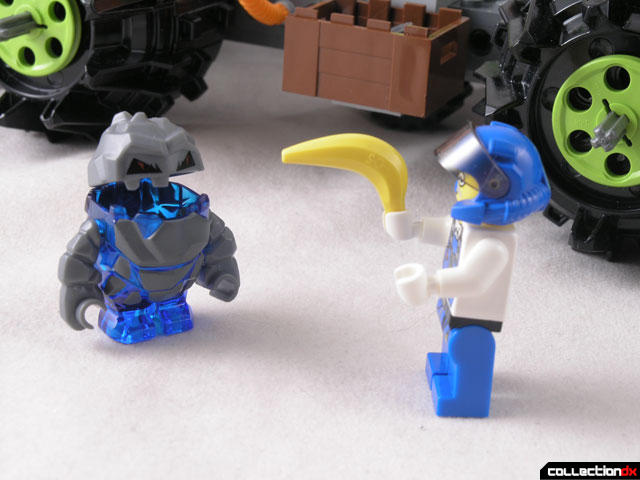 The small rock monster is cool but the larger one is clearly superior. The large rock monster has rock throwing action. 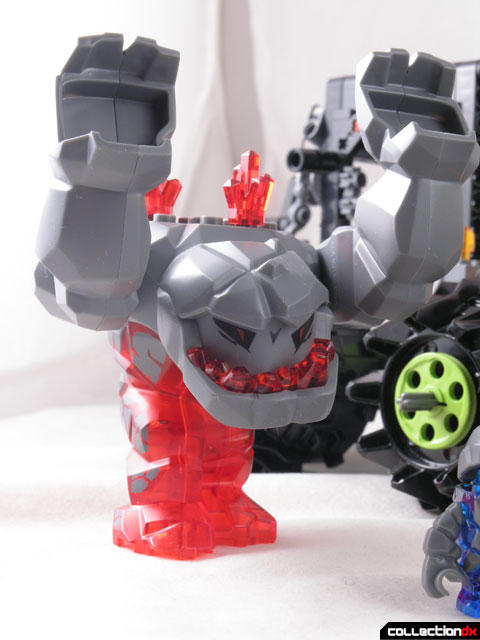 Nate really dug this set a lot, but unfortunately, parts have slowly fallen off and been swept up into the larger Lego bin. I doubt this particular set will stay intact for long, as sets like this are not really meant for long term play. He gets a little frustrated as he loses more and more pieces, but I try to explain to him the idea of entropy and how, eventually, all Lego parts end up in the bin to be rebuilt into something new.

I loved LEGOs as a kid, this must have been mind blowing for your kids. Looks like a great Christmas at the Bernards!

The banana was a one-time gag in the promo movie(s)- one of the Power Miners threw it at a Rock Monster's face on his stolen motorcycle.

" He gets a little frustrated as he loses more and more pieces, but I try to explain to him the idea of entrophy and how, eventually, all Lego parts end up in the bin to be rebuilt into something new. "

The Zen of Lego?