While not as popular as the more iconic Star Wars armors, the TIE Pilot is still a widely sought after character that is probably recognized more for Starfighter they pilot than the character itself.  Like all 6in Black Series figures, the TIE Pilot comes in the typical black window box, this one numbered five. I really have no idea what’s going in with the 6in Black Series numbering; The TIE Pilot is listed as #05 on the box though there have been well over five releases in the line. If someone could enlighten me, I would be very grateful. 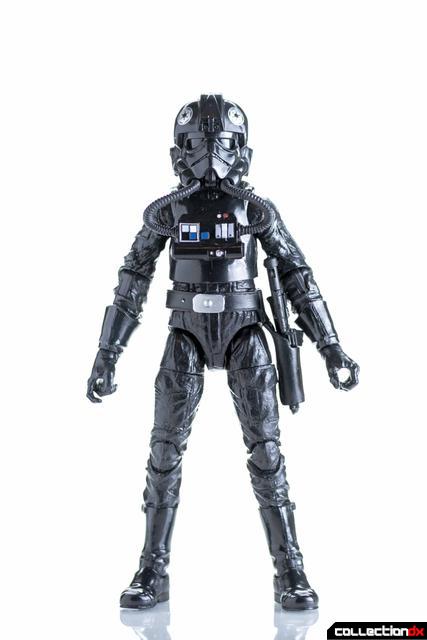 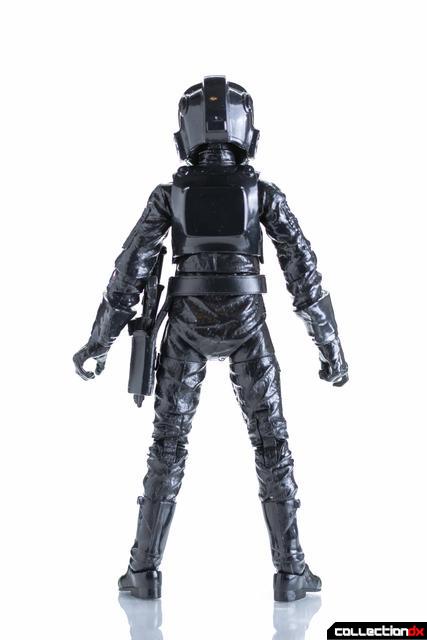 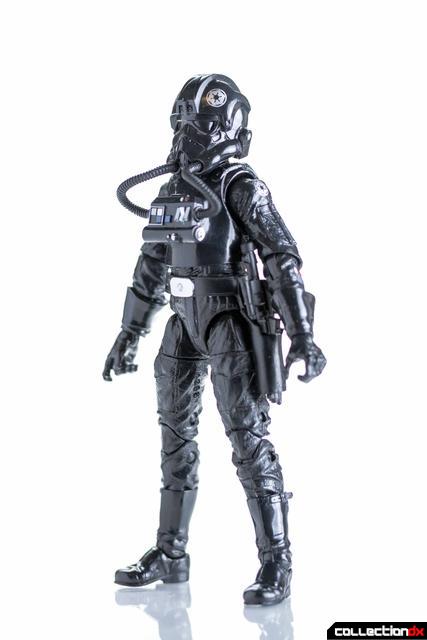 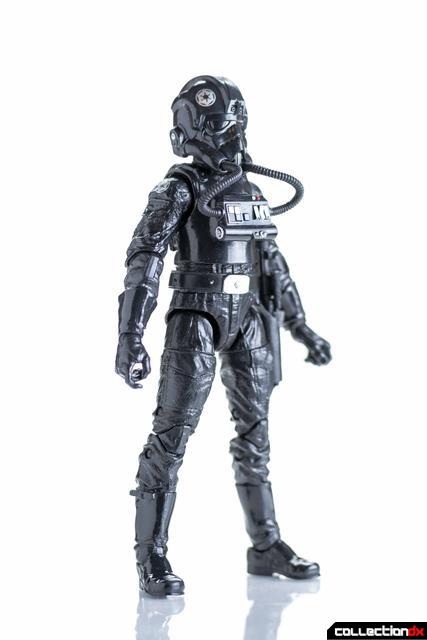 While the quality of the human face sculpts in the series is debatable, their generic troops have always been pretty good for the most part. I’ve only owned a few of the 6in figures, though I think the TIE Pilot is one of the best looking troopers and is a faithful recreation of its onscreen counterpart. The molded folds of the flight suit look great and the armored parts have a nice glossy sheen. 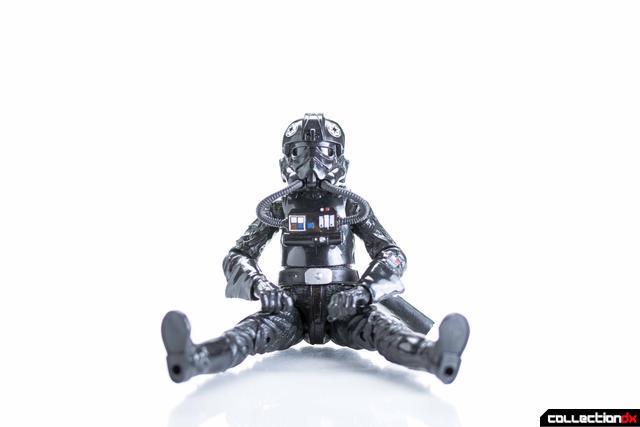 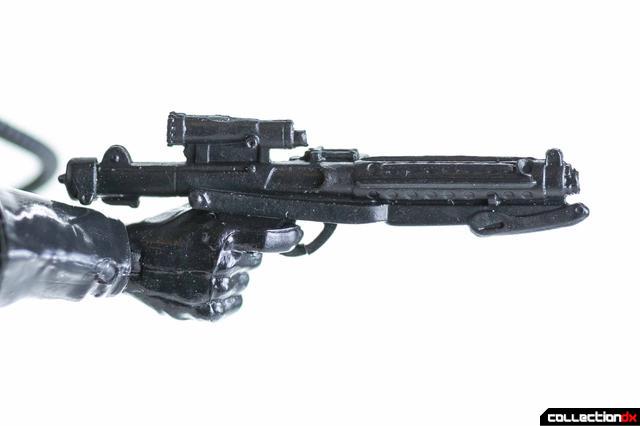 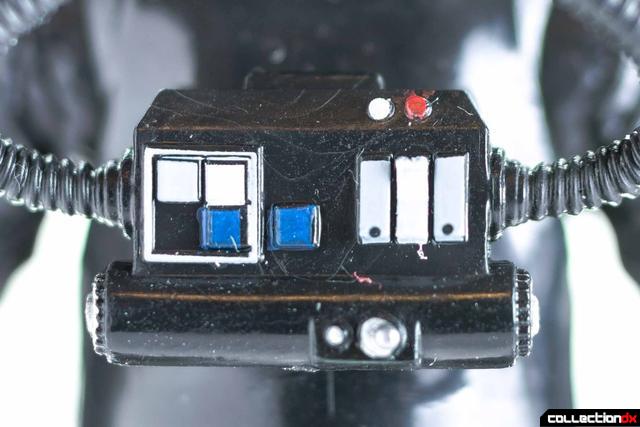 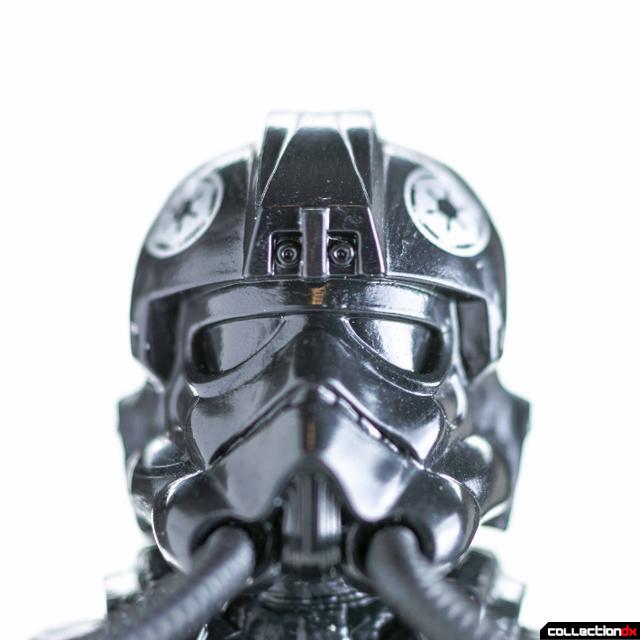 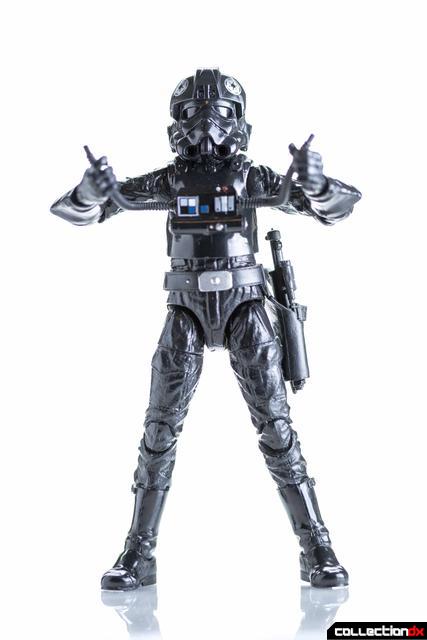 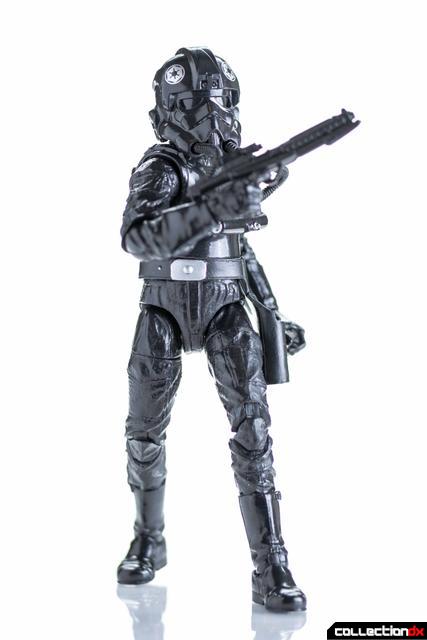 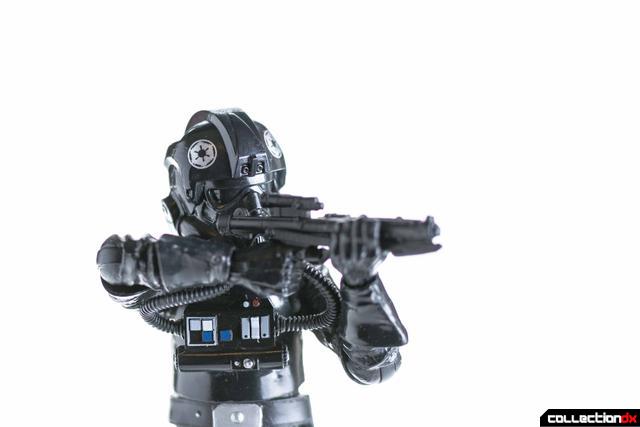 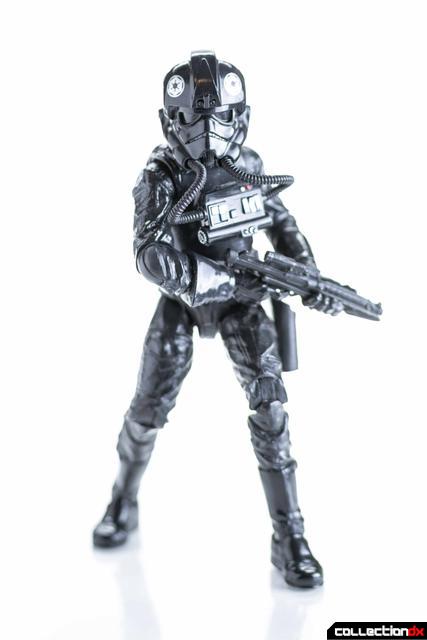 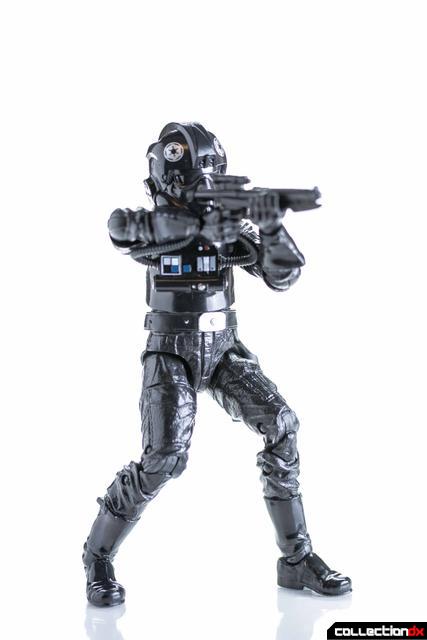 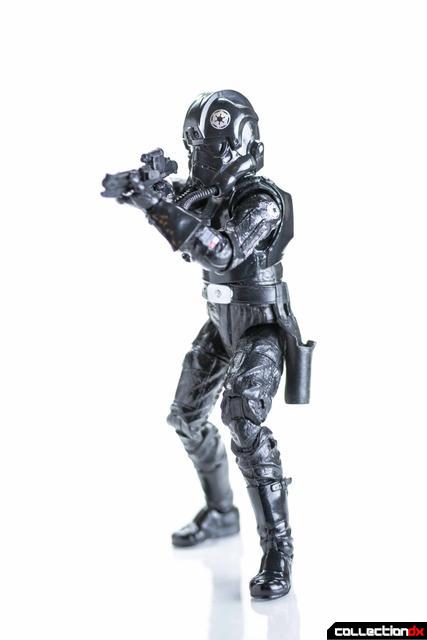 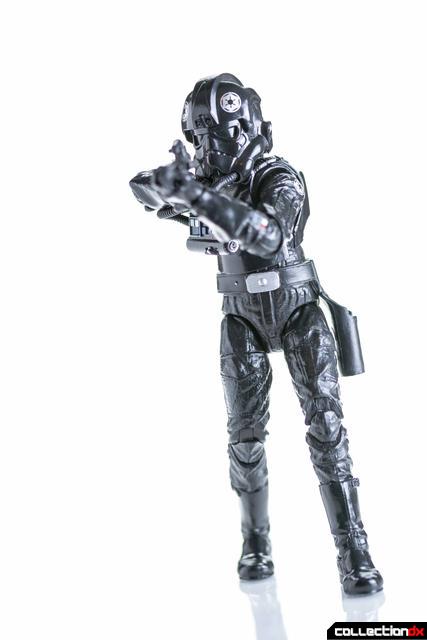 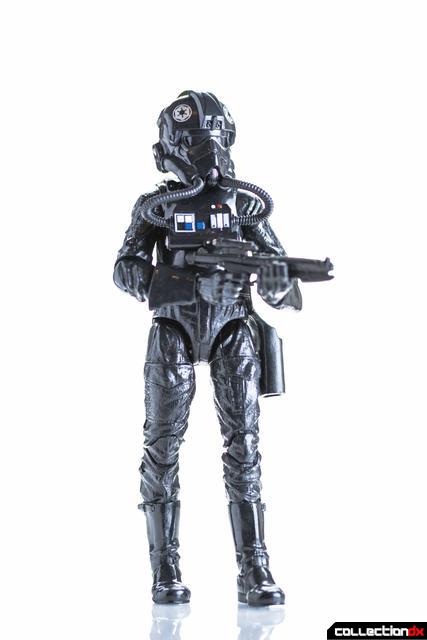 Articulation is average for a 6in American figure, with double jointed knees and single jointed elbows. You can’t get any natural looking kneeling poses, but the TIE Pilot does look pretty good holding the E-11 Blaster Rifle. The belt and holster are a single piece which can rotate freely but cannot be removed. I don’t think the TIE Pilot armor is ever officially shown with a holster, and it seems odd that he comes with such a large rifle. You would assume being a pilot he could at least come with a small pistol and holster that would actually allow him to sit down in a TIE Fighter. It’s an odd choice, but I do wish the holster was at least removable. I’ve only owned a few 6in Black Series figures, but the paint applications on the TIE Pilot are vastly superior to the ones I had on the Prototype Boba Fett and Clone trooper. The tampo markings are crisp and there are not any random paint splotches.

The new Rogue Squadron movie is actually the story of a rogue Tie Pilot rescuing a little girl from the Empire. 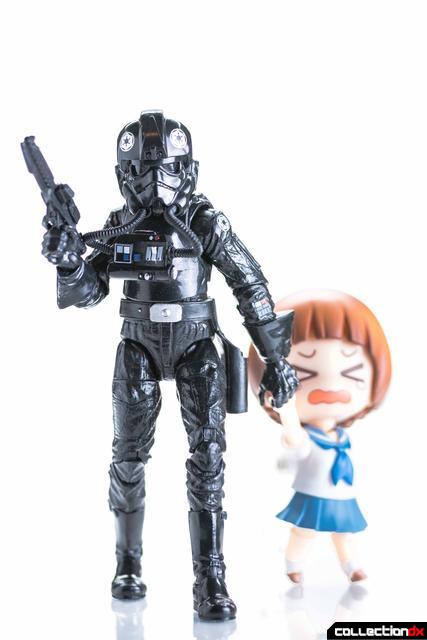 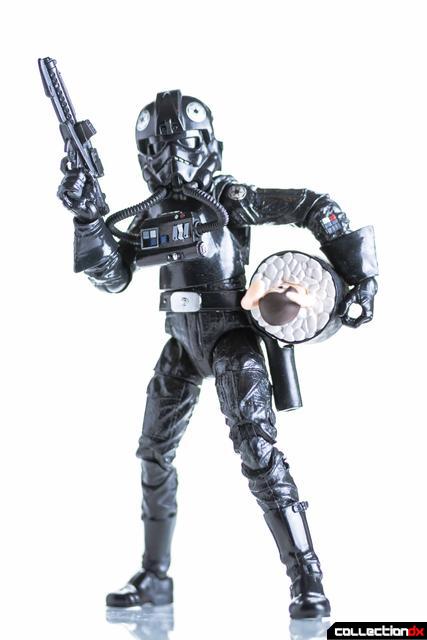 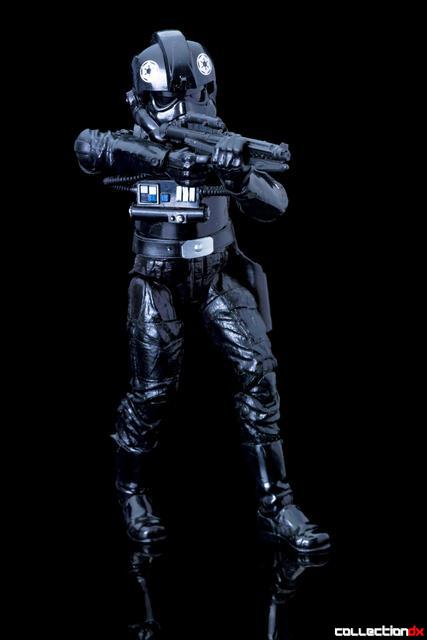 I had pretty much given up on the 6in Black Series figures until I saw this at Wal-Mart on sale for 15 dollars. Hasbro’s incredibly poor distribution and kind of disappointing Clone Troopers meant that I had lost interest in the line for the most part. The newly released promo along with the fact that the figure was on sale reinvigorated my passion for Star Wars so I decided to give it another shot. Thankfully, the TIE Pilot is a pretty fantastic figure which has renewed my faith in the Black Series. There’s nothing really wrong with the figure, articulation could be better but it’s what I’ve come to expect with American toys and the holster/blaster thing is army builder in my nerding out. Hasbro’s distribution has been mostly terrible with the Black Series, and until last Friday, I had never even seen a TIE Pilot on the shelf. If you do manage to spot one, I’d recommend grabbing one as it’s a great solid toy that represents what the Black Series is all about.

...its not actually unusual for armoured vehicle crews to be issued with a weapon thats basically a cut-down assault rifle - they used to be called "carbines" (the exact definition is a bit hazy, rather like the naval term "destroyer", but essentially a cut-down rifle, sometimes firing a smaller calibre round) or what are sometimes now referred to as a "Personal Defence Weapons", which may be a carbine-like modification of an existing weapon or a specially created gun.

IIRC, the Stormtrooper "blaster rifle" prop was based on a Sterling submachine gun, which were often used for self-defence purposes, so its not entirely an unsuitable accessory!

I don't know what modern aircrews are issued beyond a sidearm these days, though I've read of helicopter crews carrying assault rifles in case they get shot down; Russian cosmonauts are also issued with a special gun as their space capsules come down over remote regions of land and they need one for protection from wildlife whilst awaiting pickup.

I think for me, it's just weird for TIE pilots in particular. For a Y-WIng or X-Wing or something with shields, you have the expectation to survive if shot down but a TIE Fighter is just a ball with two wings that's essentially disposable.

I never knew that that cosmonauts carried guns, but looking it up, it seems pretty awesome. The machete stock is insane.

Well, according to "official" Star Wars canon (or at least it used to be canon), the TIE Pilots uniform is actually a self-contained suit. The TIE fighter doesn't have any life support systems, but it does have an ejection seat. So in theory the pilot could eject from a damaged fighter and would have a sidearm to defend himself while awaiting rescue. You're right, I don't think TIE Pilots are ever shown with blaster holsters on their uniforms the few full body shots that are shown, but I do think they were shown with blasters/holsters in some of the promotional costume shots.

Regarding the #05, It is the 5th figure in the "Blue" series. For the first figures, they call came in packages with orange stripes and lettering, this is the "Orange" series; #1 X-Wing Luke, #2 Darth Maul, #3 orange pauldron Sandtrooper, #4 R2-D2, #5 Slave Leia, #6 Boba Fett, #7 Greedo, #8 Han Solo, #9 Stormtrooper, #10 ROTS Obi Wan, #11 Bespin Luke, #12 ROTS Anakin, and #14 ATOC Clone Trooper. (#13 Chewbacca was moved to be the Blue series.) For the blue series it's; #1 black pauldron Sandtrooper, #2 Darth Vader, #3 Jedi Luke, #4 Chewbacca, and #5 TIE Pilot. I think the difference between the series is just they year of release, Orange series is 2014, Blue series is 2015. There is also a "Red" series coming out this year, but these all look to be Expanded Universe or Force Awakens characters.

Thanks for the numbering clarification! I wonder why they didn't just go with a normal numbering system, it feels a bit convoluted.