When the robots returned from the deep canyon of the halved Sentai Mountain, the Thunder Fury led the way. Aggressive in stance, weaponry, and the motives of their red Devastator-type robot pilots, to see one and survive long enough to tell the tale is rare. It has been sighted lobbing four fragment grenades at a time from the two paired launchers on its chest, though its supply is suspected to be greater than ten. But that is only to clear a wide path for other robot-controlled Battle Machines to follow-up from behind. It also claws deeply into any solid object with the long enforced-titanium reciprocal saw mounted onto its left arm. A large, 8-barrel short-to-medium-range gattling cannon, mounted squarely in the center of the torso, shreds armor in seconds. But the reason for using such unconventional weapons quickly becomes obvious... The robots added a generator into the Battle Machine so powerful for its size & weight class that it requires four thin static dischargers over the shoulders to prevent overloads. This is so that it can power the only energy weapon it carries- a mobile plasma cannon mounted to the right arm, which can melt or blast through anything. Only the small supply of thermal regulation fluid in the rectangular container below the cannon’s barrel prevents it from being used constantly and requires cool down time, lest it melt itself! Of the complete arsenal of the Exo-Force, only the six-barrel heavy laser cannon mounted onto the left arm of the Grand Titan is able to compete against a Thunder Fury’s armor. It is difficult to determine if this Battle Machine is a modified version of a previous heavy lifting mining machines from before the war, but it has been confirmed that they are now piloted by battle-hardened Devastator-type robots, which aggressively pursue even wounded targets until they are completely destroyed. 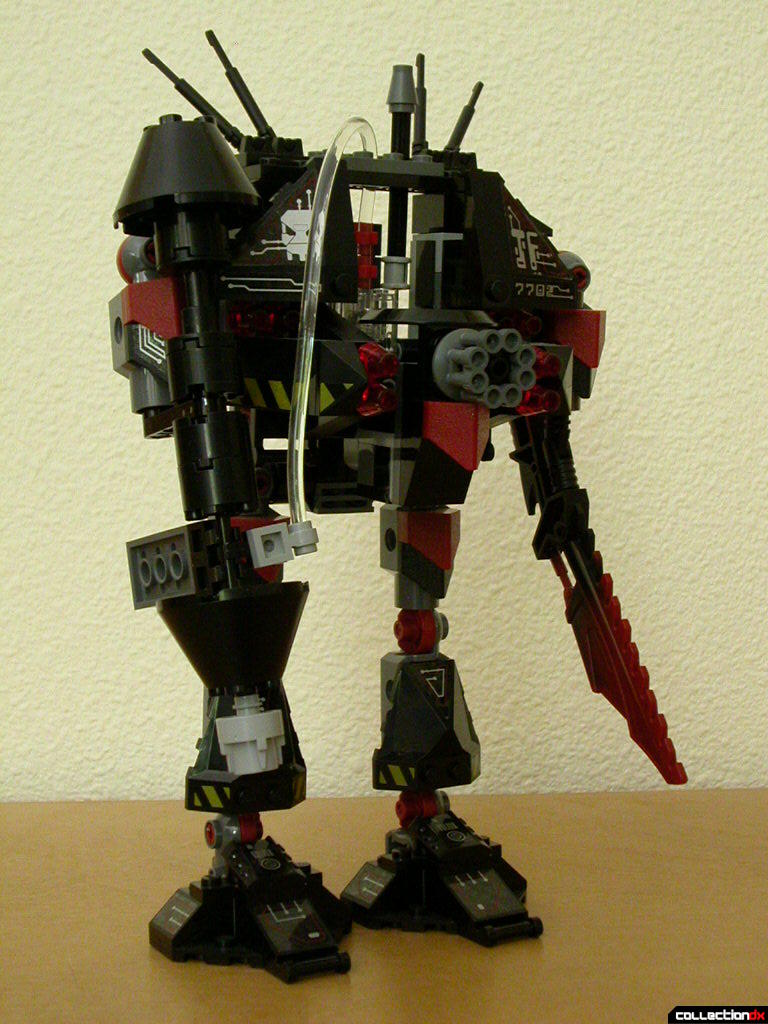 This thing is bulky and looks heavy. Plain and simple. It has one more piece than the Exo-Force Grand Titan (196 pcs), but less than the robots’ Sonic Phantom (215 pcs). The Thunder Fury (back) is dressed in black, dark gray, and red plastic. Using joints originally developed for the Lego “Knights’ Kingdom” line, it is very flexible. The shoulders, hips, and knees have two-axis joints that snap when moved, and allow for a wide range of fixed poses. The ankles also have both snap and free-rotate joints, but this isn’t as much of an issue. The arm for the plasma cannon has no elbow joint, but can rotate about mid arm a little. The left arm with the long blade-like saw has a thin two-piece elbow. The single-piece hard PVC reciprocal saw, which is molded in mixed red & black on the left arm, is originally a claw-like leg from the Keerakh (#8619) and Turaga Dume & Nivawk (#8621) sets from the 2004 “Bionicle” line. And the four small spiky antennae on the shoulders are black PVC minifig rifles; the gattling cannon is composed of four minifig binoculars wrapped around another piece. Unlike most of the human Exo-Force Battle Machines, the Thunder Fury uses no clear canopy, opting instead for an open air cockpit for the Devastator’s body.

In addition to being large and poseable, the Thunder Fury is one of five “Exo-Force” sets that use the newly-developed Lego light brick- a transparent 2 x 4 brick that has a small red light emitting diode (LED), a small, enclosed, self-contained battery, and a small trigger blended into the top. While the light brick can be snapped onto things, it has no studs of its own so nothing can be snapped on top of it or else the trigger couldn’t be accessed. The light brick in the Thunder Fury set is activated when a multi-piece trigger is pressed on the back of the torso. This slides the front of the torso up slightly, and inside a Technic piece is wedged against the light brick’s trigger, activating the brick’s battery & LED. When this happens: 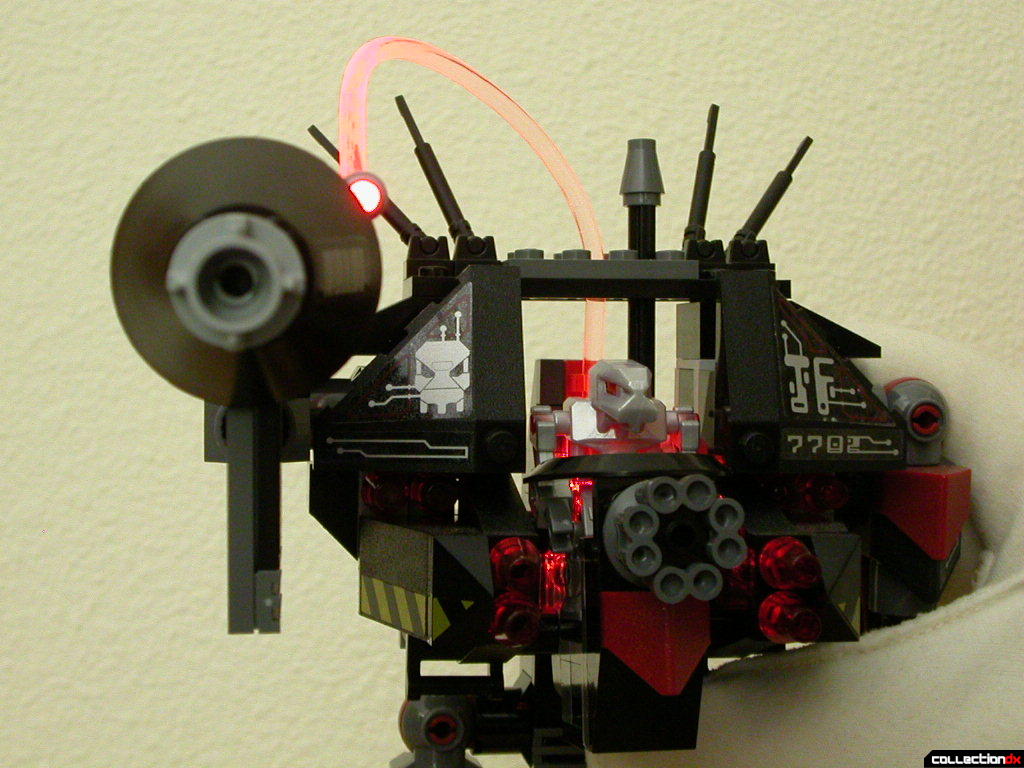 Lego Set #7702 also comes with a new red Devastator robot minifig, which is exactly the same in appearance as the other robots in the line except in color. What separates the different light gray Devastator robots is the alternately-colored plastic in their torso pieces- blue for Set #7702, red for Set #7703, and green for Set #7704. The alternate colors are semi-transparent, and light can shine through them. For the eyes, a red #2 Technic bar is slid in through the back of the head. The hand claws can also rotate at the wrist, and need to be attached. 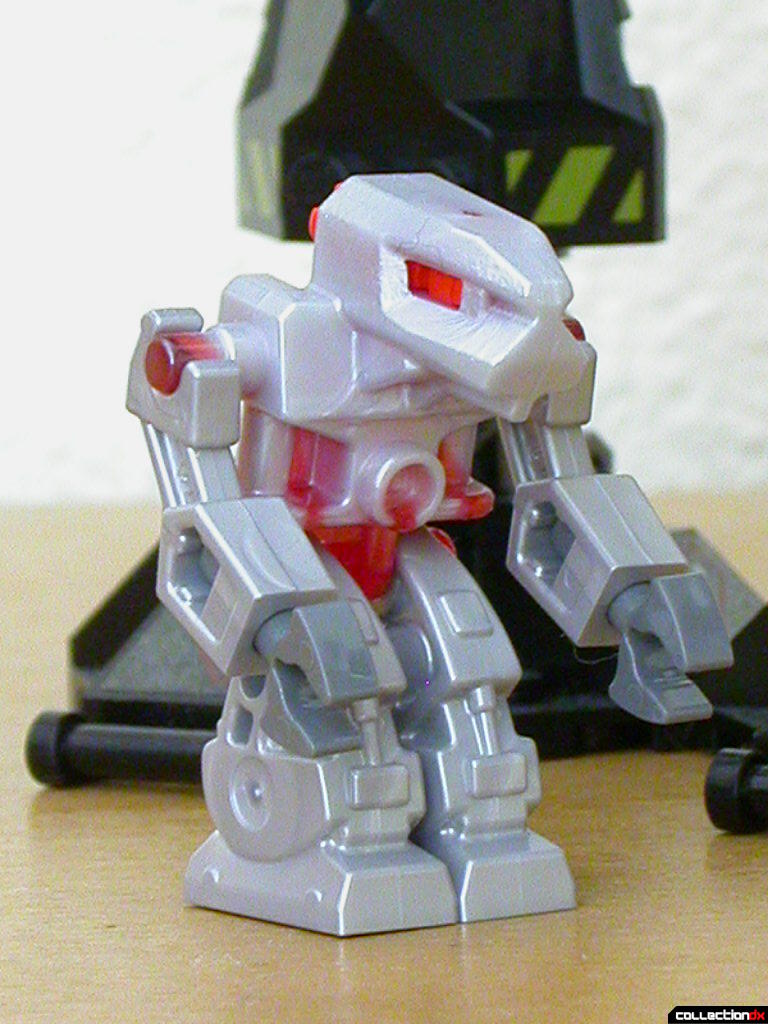 Normally, when a Lego set needs specific details on a part, such as a control panel or flag, the image is printed or painted directly onto specific parts. However, the “Exo-Force” line breaks that mold by using stick-on decals; something that was rarely ever used in the past. There is a small sticker sheet which provides allegiance markings, warning symbols & notices, and names. This serves to allow for a wider range of piece marking without Lego having to create a completely different piece each time, and merges the “Exo-Force” and Japanese toy influence closer together. It does, however, have a small downside- because of the design of the decals, some of them cover places where other Lego pieces can go, which limits how a decal-applied piece can be used or taken apart. There are two conflicts with Set #7702:

In addition to building the standard Battle Machine, the official Lego “Exo-Force” website (http://exoforce.lego.com/default.aspx) shows how the same pieces can be rearranged into an alternate biped Fire Fury Battle Machine with backwards-articulated knees, no arms, a large cannon mounted above, and lasers in front; found in the Online Building section of the site, and pictured on the back of the set’s box. (I haven’t built it myself yet, so I can’t give details on the alternate model.) As a bonus, online instructions also show how Set #7702- Thunder Fury can be combined with Set #7703- Fire Vulture (sold separately) to form a much larger gray, black, and blue robot Battle Machine known as the Raging Storm. (Again, I haven’t built this combo model yet.) 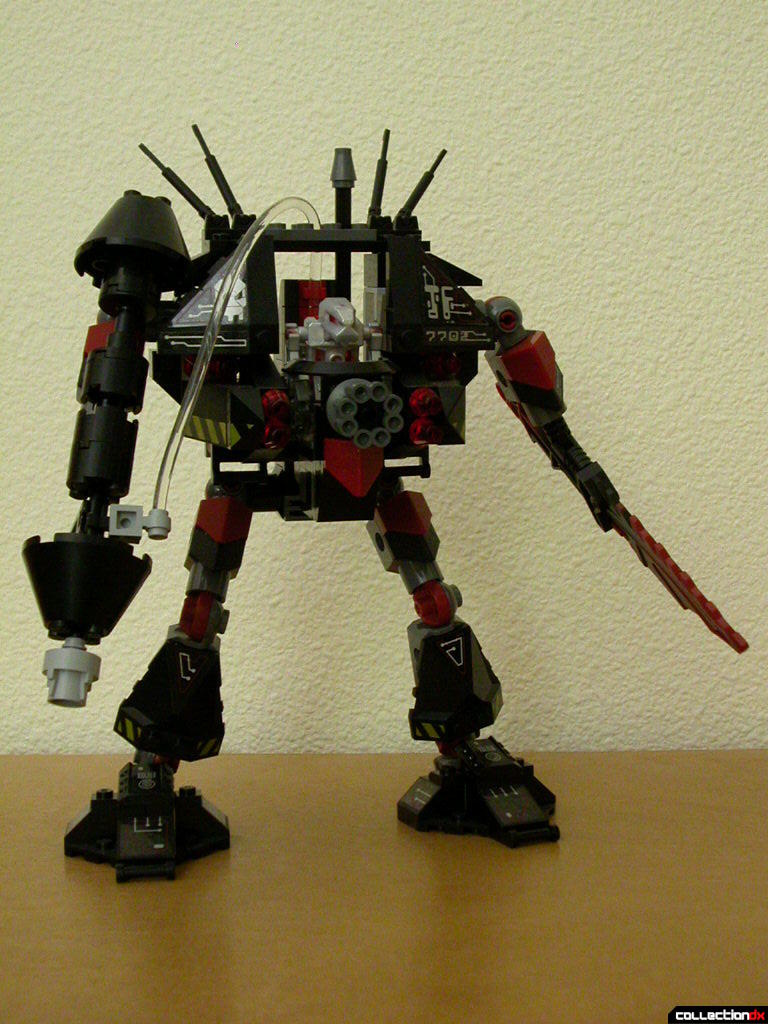 One of the things that irks me about these Battle Machines equipped with light bricks is that the fiber-optic cords don’t reach far enough; this is most obvious with the Thunder Fury, and leads to some creative ways to pose it. If they’d just added another ½ inch... The cannon also looks & feels weak from the piece selection they used. The big cannon on the right side was a good idea, as was the saw on the left arm, but it just didn’t come off right. Despite the few fragile areas on this set, I still like it. I’ll recommend it. There’s something interesting in this series, and I won’t mind seeing more of it if they continue it.